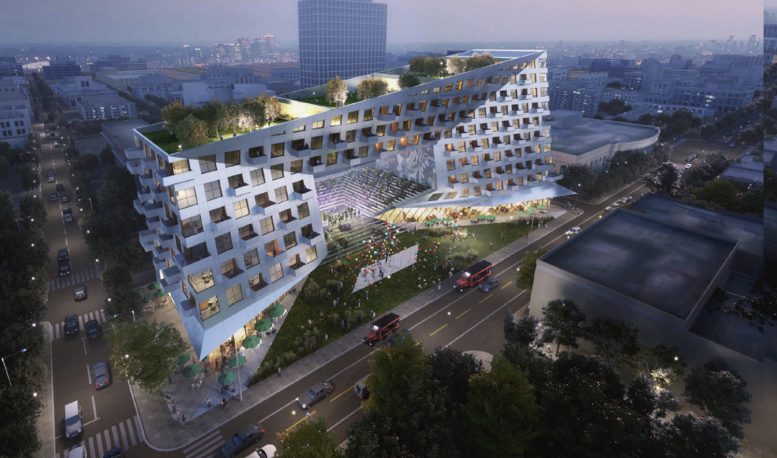 Invest South/West has revealed the development schemes for its Bronzeville RFP site located at 449 E 47th Street in Bronzeville. The city-owned parcel is a corner property at the intersection of E 47th Street and S Vincennes Avenue. The approximately 26,300-square-foot site is currently vacant. 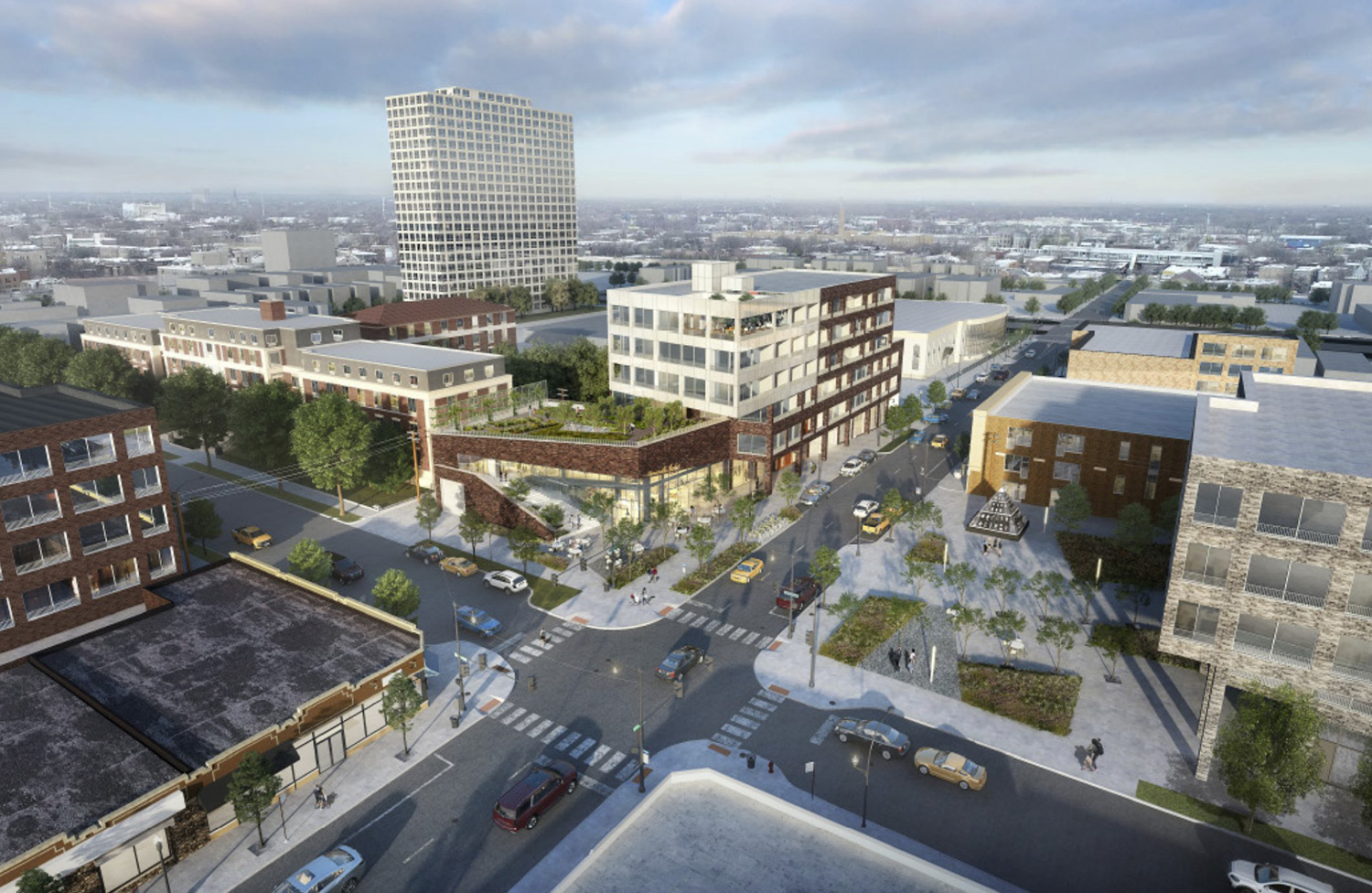 Envisioned by KMW Communities and LG Development Group, the first plan proposes a six-story mixed-use building, holding residential and commercial space with covered parking. Designed by Landon Bone Baker Architects, Volume One Design Studio, and Civic Projects, the building will hold an 11,000-square-foot, two-story culinary and entrepreneur flex space at ground floor. Plans include 25 housing units, with 5 of them designated as affordable. 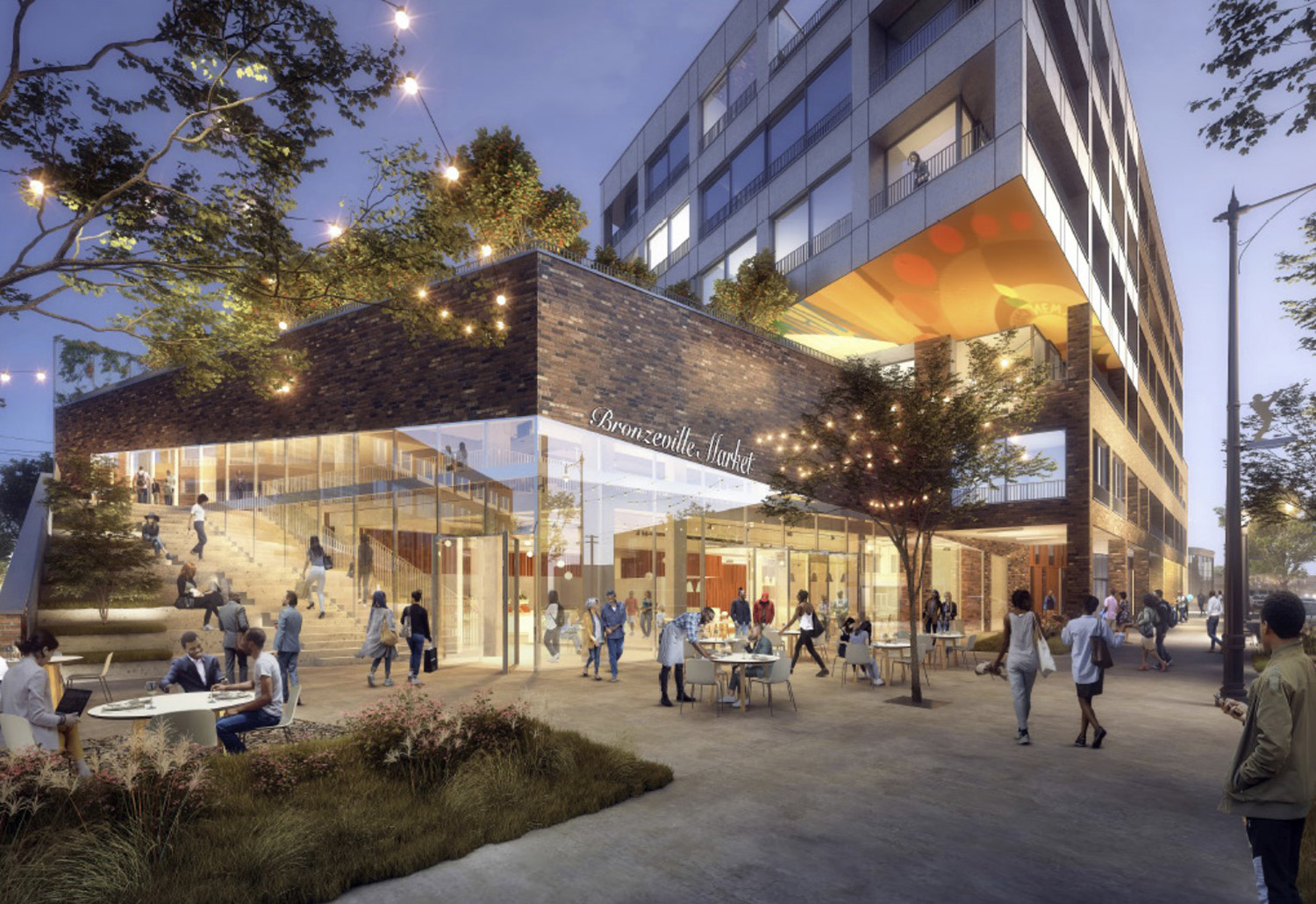 The development features communal roof gardens and a rooftop farm. Colonnades along E 47th Street as well as a community plaza on the corner of S Vincennes Avenue and E 47th Street create an interactive pedestrian experience. A characteristic overhang integrates artwork of a collaborating local artist. Construction will be led by KMW Communities and LG Construction Group. This version is estimated to cost $19.4 million. 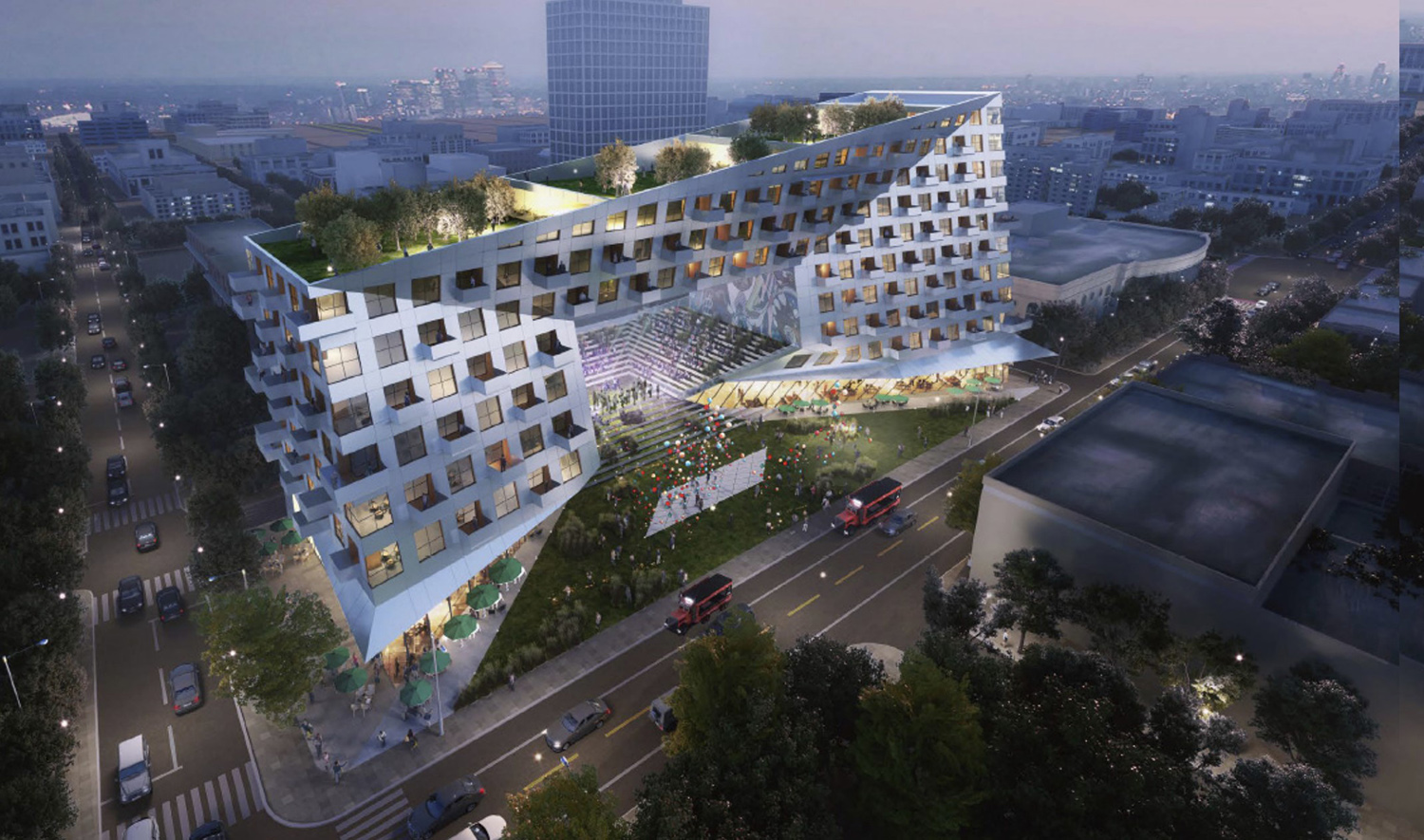 Proposed by Imagine Group, the second proposal envisions a ten-story mixed-use development that will include an 82-unit multi-family residential building with two floors of retail and commercial uses. Designed by JGMA, the building will create an enclosed outdoor courtyard and theater space for community performances and events, as well as space for casual dining and pop-up marketplaces. Approximately 20 percent of the residences will be designated as affordable.

The developer also seeks to acquire city owned parcels located at 416-428 E 47th Street and 448-58 E 47th Street for future phases of this development. Estimated to cost $57.8 million, this first phase will be constructed by W.E. O’Neil and Milhouse Engineering and Construction. 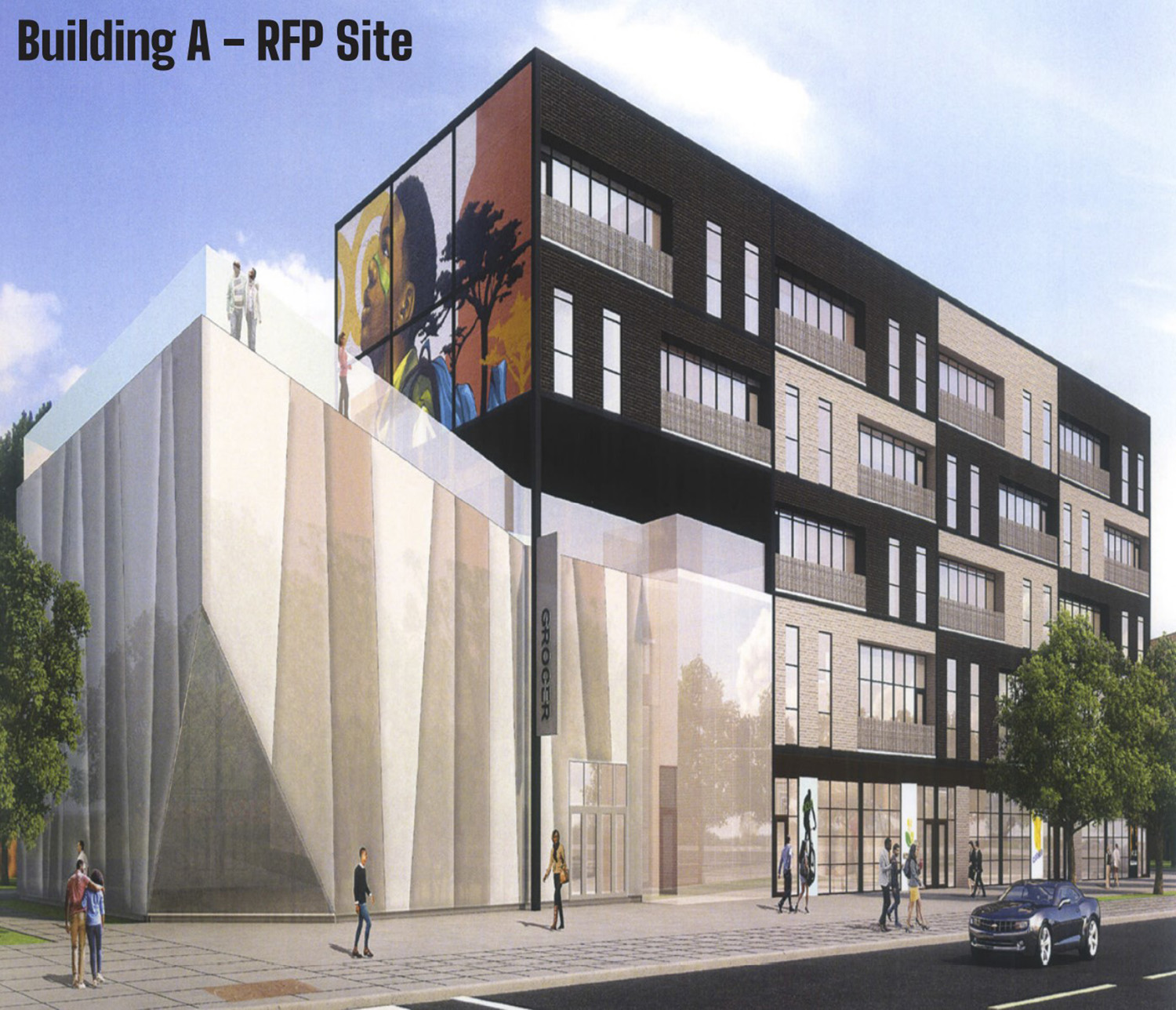 The final vision for the site has been proposed by Revere Properties and Chicago Neighborhood Initiatives. Designed by Brook Architecture, Revere Properties Architects, and Site Design Group, the development would produce three mixed-use developments on both sides of E 47th Street between S Martin Luther King Drive and S Vincennes Avenue. In addition to the RFP site, the development team proposes to develop two mixed-use structures on the north side of E 47th Street. 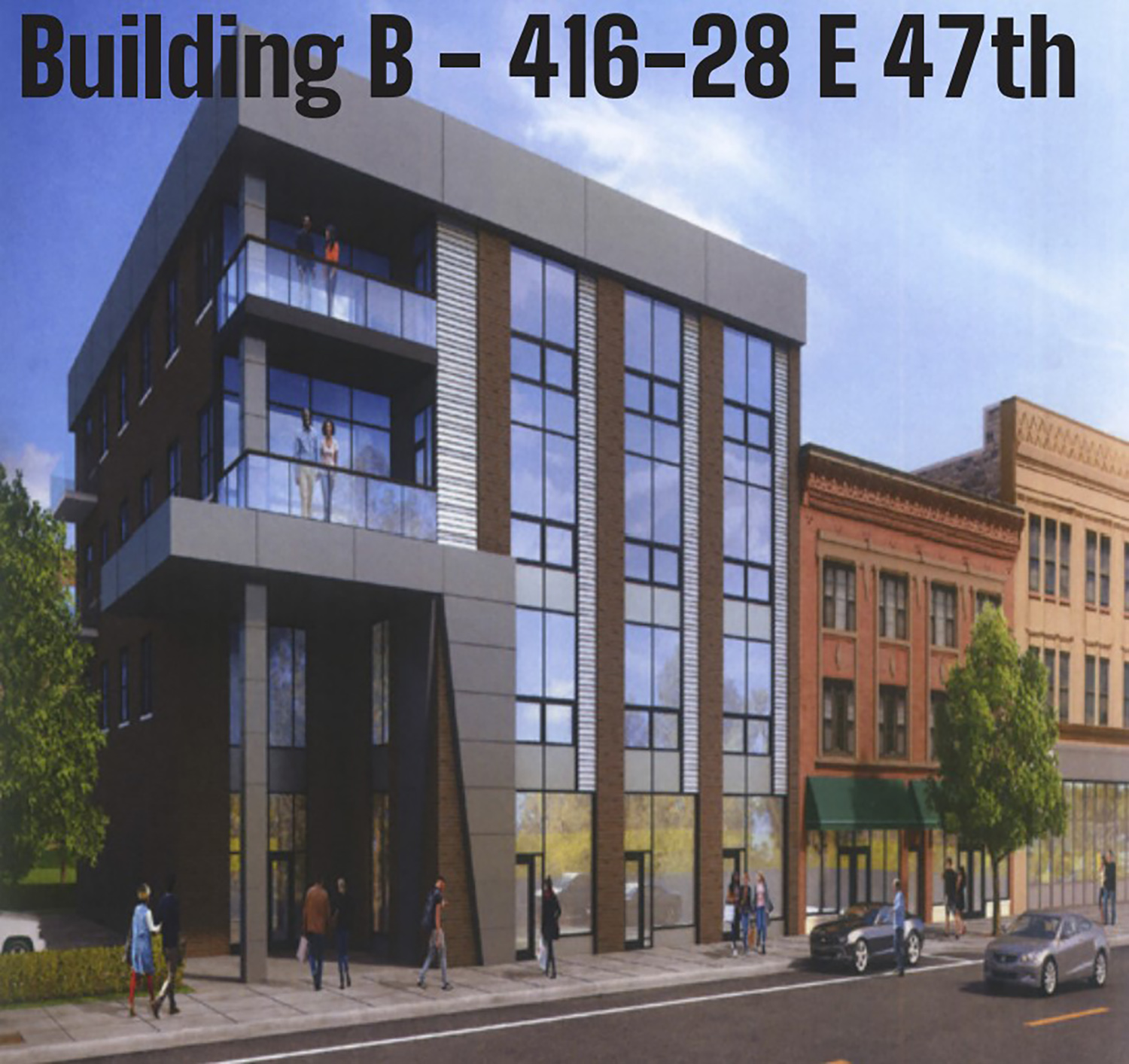 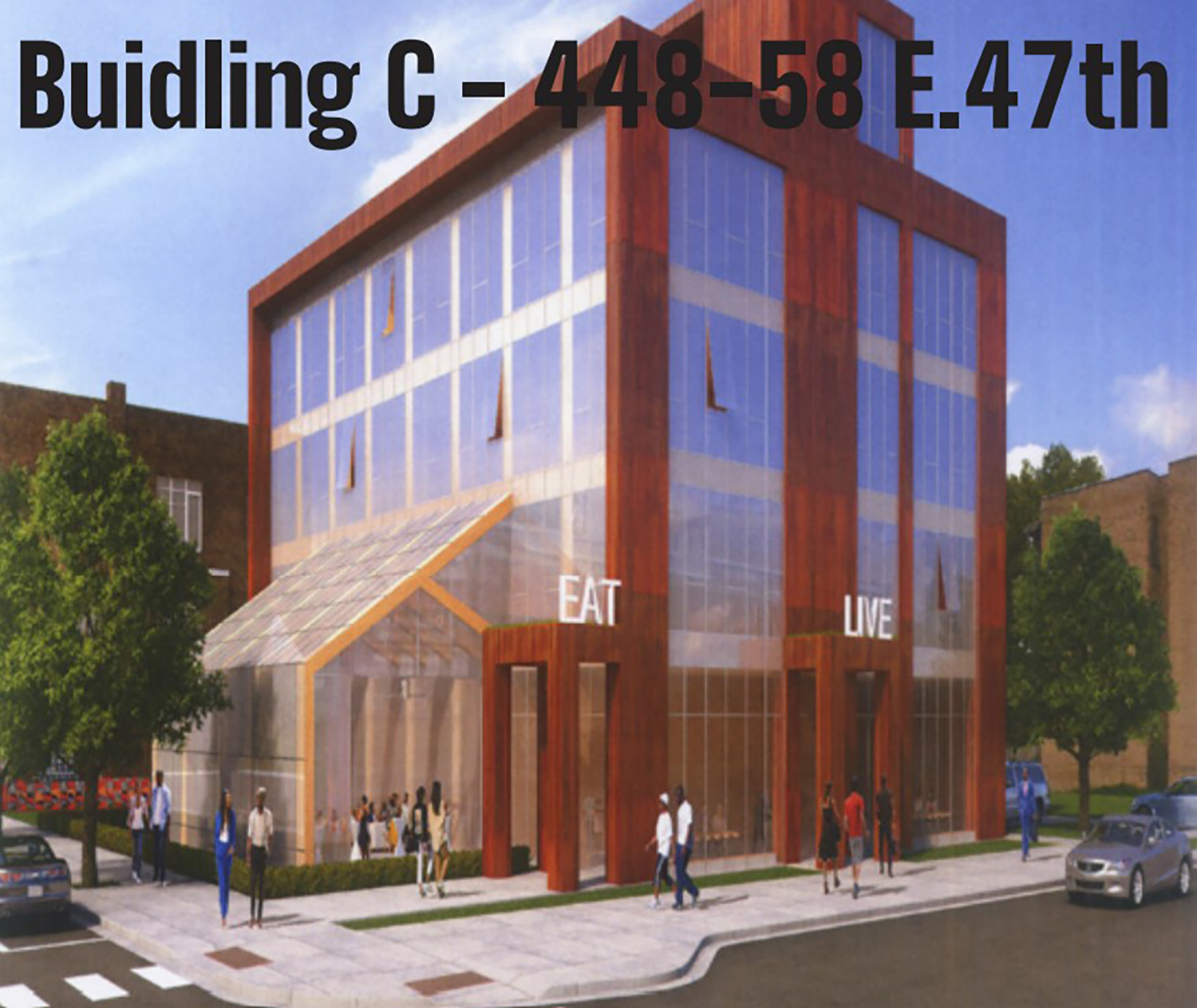 Building A, located on the RFP site, will rise five stories and hold 30 rental units with 17,000 square feet of ground-floor retail space. It will also offer tenants a garden lobby and rooftop terrace. The second structure, dubbed Building B, will rise four floors and hold 6,200 square feet of retail and office space on the first two floors, with the upper two floors holding eight condominiums. The final portion of the project, Building C, will hold 5,500 square feet of ground-floor restaurant and culinary space, 1,200 square feet of atrium event space and eight live/work condos. With a total of 46 dwellings, 30 of them will be designated as affordable. Totaling $41.7 million, the project is expected to be constructed by Powers & Sons Construction.

All three of the proposals will be presented to the community later this month before the winner of the Bronzeville RFP is chosen. The winning submission will need to go through all typical city regulations and planning processes as needed before construction could begin.