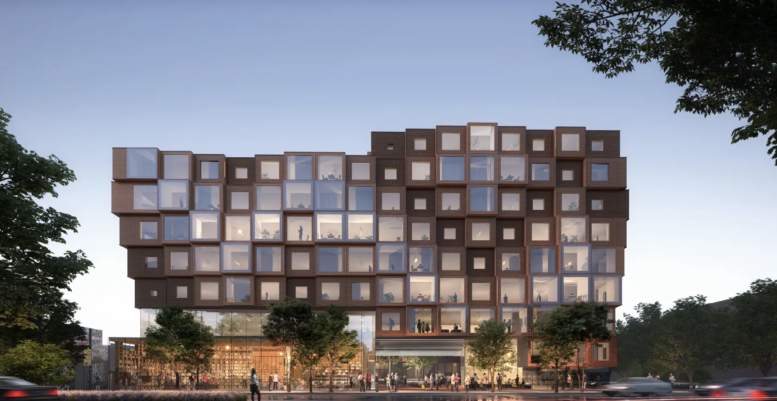 Renderings for Back of the Yards: Rooted and Rising by JGMA

The finalists are located in Roseland, Garfield Ridge, South Shore, West Garfield Park, Greater Grand Crossing, and Back of the Yards, more information can be found via their websites and articles, linked as the proposal’s name: 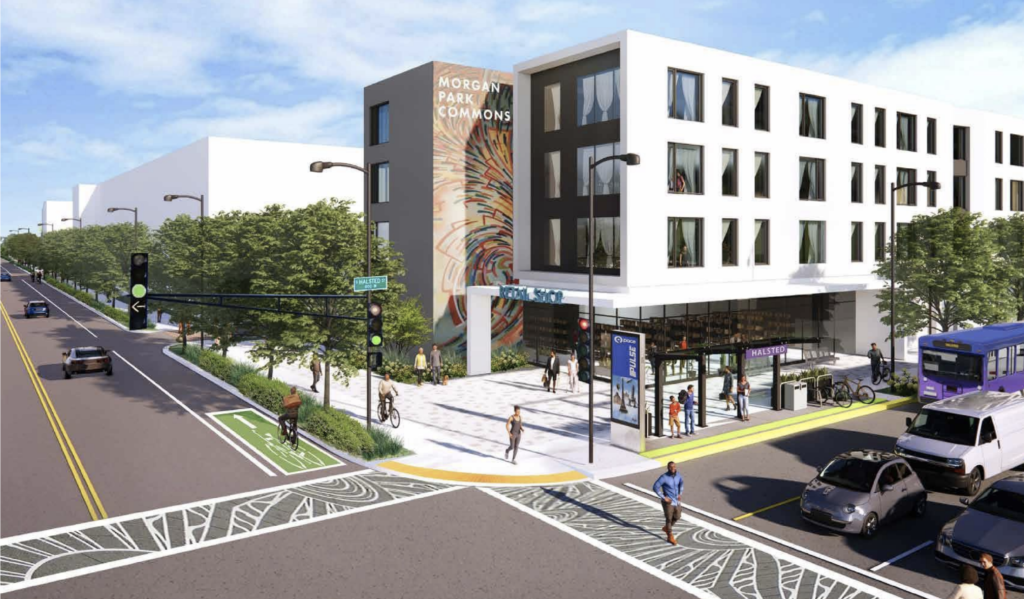 Led by the Far South Community Development Corporation, the initiative hopes to repurpose nearly 1 million square feet of blighted community areas in order to spur economic growth. The $10 million would be a part of $132.8 million being invested to create 130 rental units, 50 single family homes, 51,000 square feet of new office and retail, 10,000 square feet of grocery space, and infrastructure improvements. This includes the Morgan Park Commons we recently covered, education programs, a down payment fund for renters, grants to assist businesses, and improvements to Higgins Elementary.

Located within six acres of the now vacant former home of the LeClaire Courts housing complex that spanned 34 acres, it will hold a fully sustainable K-8 public school along with multiple community amenities including; a health center, fresh food store, cafe, teaching kitchen, and wellness facility. The site will also boast a three-acre urban farm, community gardens, and walking trails, with the equipment to generate 105 percent of its own energy and 125 permanent jobs. The $60 million project hopes to break ground soon and take around 18 months to complete and will serve future mixed-income housing. 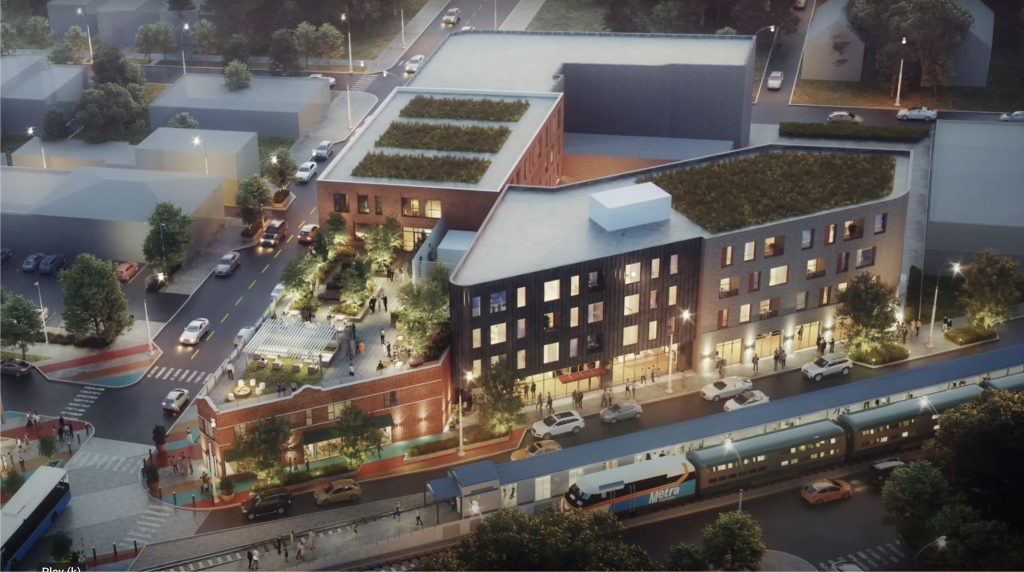 Winner of the South Shore Invest South/West initiative, the KOO Architects-designed project was announced in 2021 and will be spread across three adjacent sites preserving a few historical structures. Located on the corner of E 79th Street and S Exchange Avenue, it will bring 49 affordable residential units, 39 affordable workforce units, 24 townhouses, ground-floor retail, a pocket park, street improvements, a new medical office center and an incubator space. The $65 million proposal will be covering 25 percent of its cost via city funds as it tries to secure the remainder and offer the residences to those making 30 to 80 percent AMI. 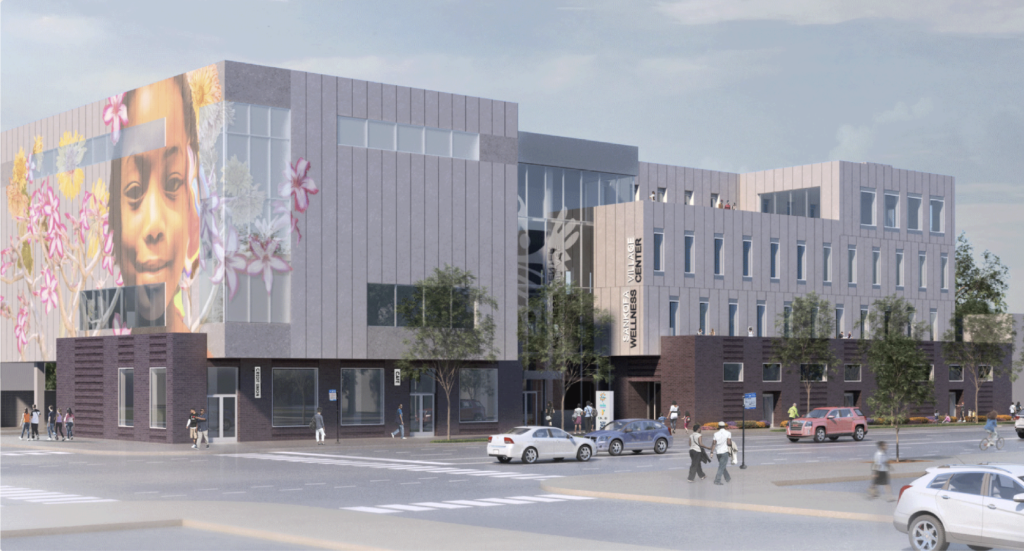 Rendering of The Sankofa Wellness Village via Pritzker Traubert Foundation

The concept of a wellness village will consist of four sites spread across the neighborhood along W Madison Street spread into multiple phases with the first being located on an empty lot at 4313 W Madison Street. The four-story building would have an affordable medical center for all ages including dentistry, as residents on average live 13 years less than those downtown, a YMCA run daycare, fitness facilities, and financial education programs. The subsequent phases would bring a new spiritually-based performance center, a social innovation hub supporting resident-owned businesses, and an effort to bring in a new grocer. 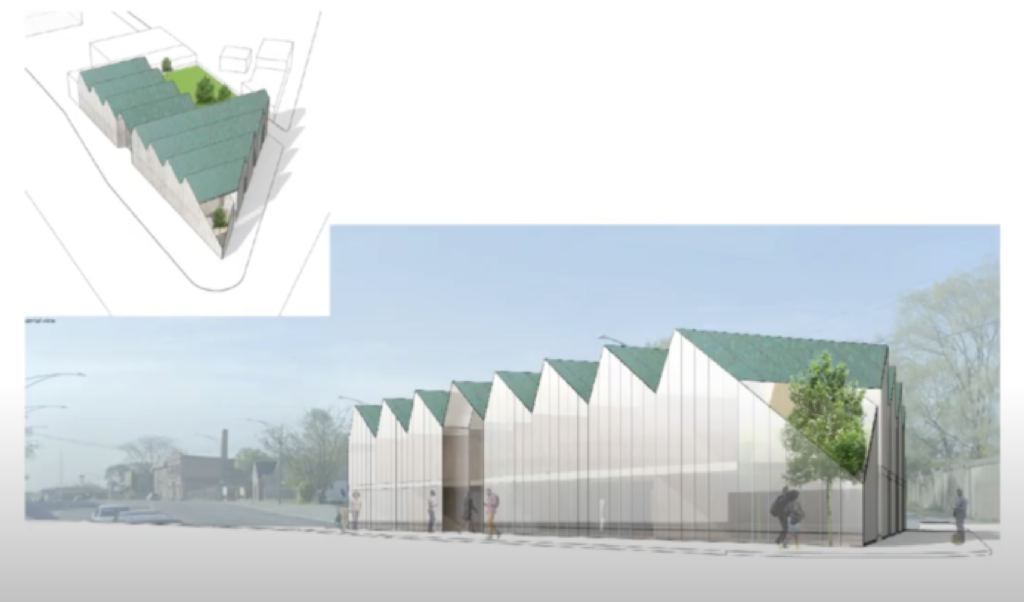 Rendering of The Xchange via Pritzker Traubert Foundation

Located on an empty lot at 7339 S Chicago Avenue, the 50,000-square-foot building with a sawtooth roof reminiscent of the area’s industrial past will bring a new innovation hub for tech jobs. This is led by Comer Education Campus, Bitwise Industries, and organizations in community health, digital innovation, workforce development, and drug discovery in order to educate and work with locals to set each other up for success. The center will set up users for a future in tech work, which in Chicago consist of roughly 14 percent of people of color, versus the city population being 63 percent people of color. 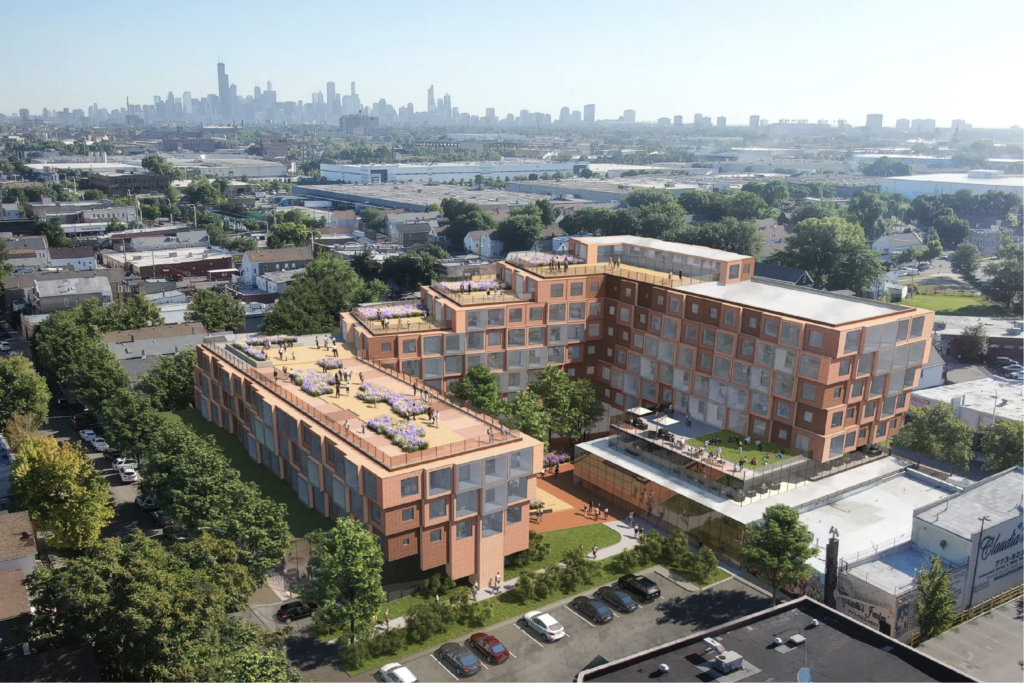 Renderings for Back of the Yards: Rooted and Rising by JGMA

Replacing a few commercial buildings at 4630 S Ashland Avenue, the new JGMA-designed eight-story stacking structure would bring 90 affordable two- and three-bedroom units. These would be complemented by a healthcare clinic, and a performance center with street views, rooftop gardens, and a courtyard enclosed by the proposal. The $61 million project is being led by The Back of the Yards Neighborhood Council in hopes to provide solace for immigrants and long-term residents of the area suffering from rising prices, the team hopes to break ground in spring 2023 and open around in fall 2024.

The award is currently on schedule with business plans due this past August, interviews and site visits being performed in September and the winner announced before year end. All of the projects will continue to live on their own outside of the prize, with many having been previously announced and moving down the road of securing funding.