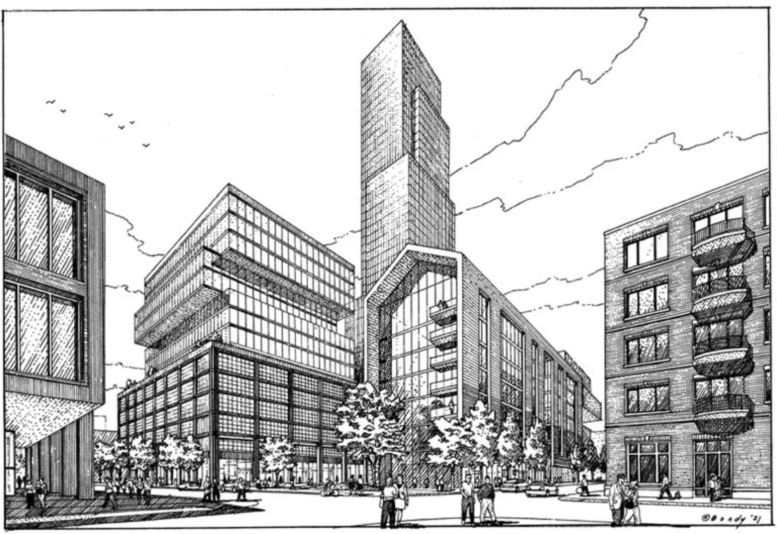 Initial renderings have been revealed for a new mixed-use development at 1200 W Fulton Street in the West Loop. Located on the corner with N Racine Avenue, replacing a parking lot and three existing one-story industrial buildings, the new complex would deliver three structures designed by Hartshorne Plunkard Architecture with Morris Adjmi Architects consulting on the project. Developer Fulton Street Companies is partnering with Waterton, a local landlord company, and Harrison Street Real Estate Capital among others. 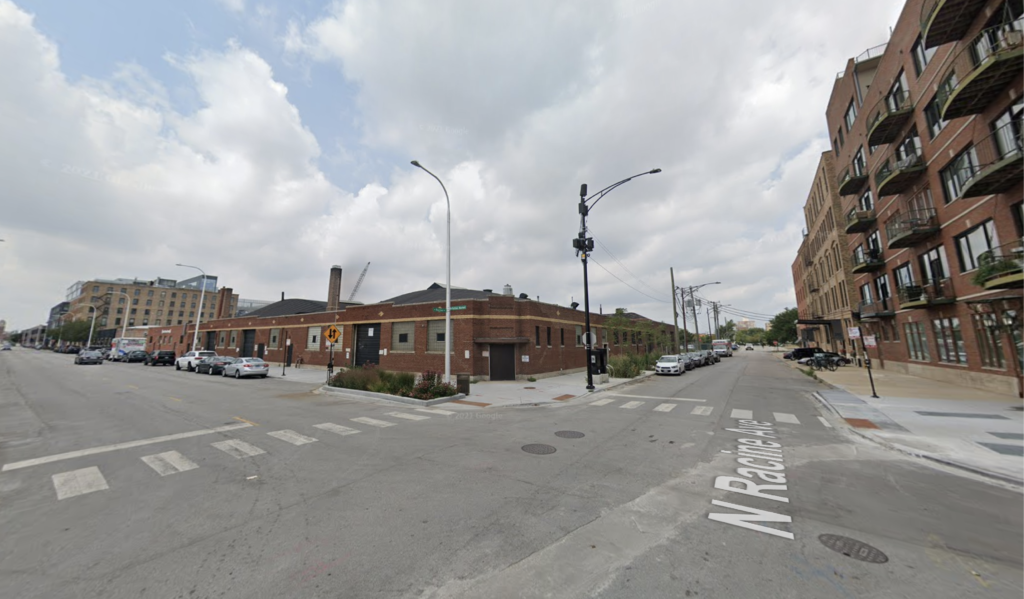 The two-acre site was recently purchased for $42 million and will hold 1.5 million square feet of space. Sitting directly on the intersection will be the shortest development of the three, a 10-story, 200,000-square-foot life-sciences building with a gable roof and a large glass curtain wall facing Fulton Street. To the west will be a 25-story, 500,000-square-foot office building with a square industrial-style base and stacked glass massing above the halfway point. Both of these will have to follow the new guidelines established with Fulton Street becoming a pedestrian street, allowing the project to be a Transit Oriented Development as well. 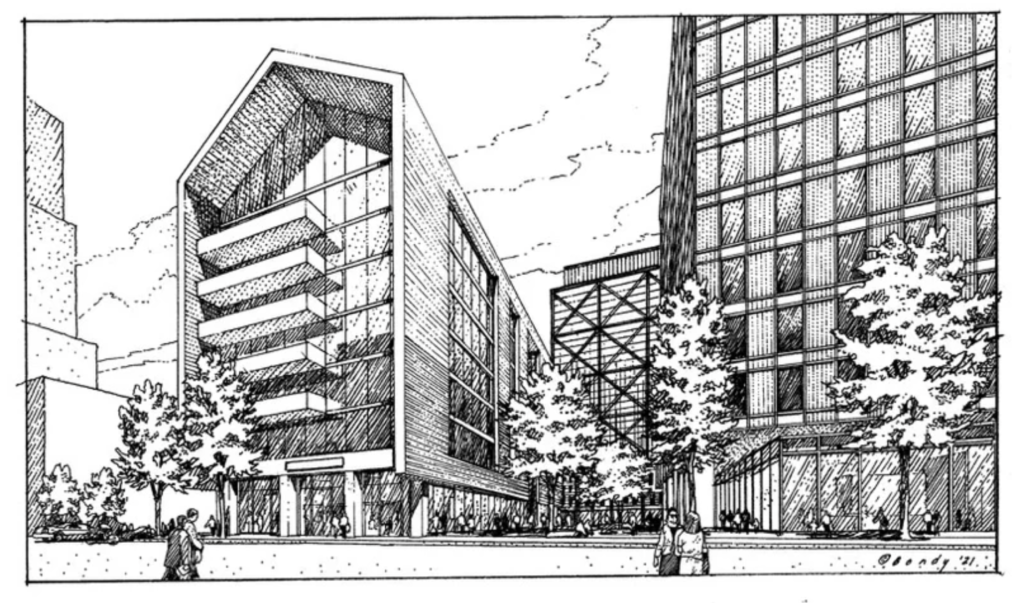 Rendering of life sciences building from Carroll Avenue by HPA

Anchoring the development will be a 50-story tower reaching around 600 feet tall at the northwest corner of the site close to W Carroll Avenue, directly across the street from Sterling Bay’s 1200 Carroll Avenue. The tower will hold 500 apartments managed by Waterton and a 200-key hotel in its staggering massing with an industrial-style base as well. In an undisclosed location will also be a 200,000-square-foot fitness center from a national group which is yet to be revealed, a similar move to One Chicago’s Lifetime Fitness Resort. 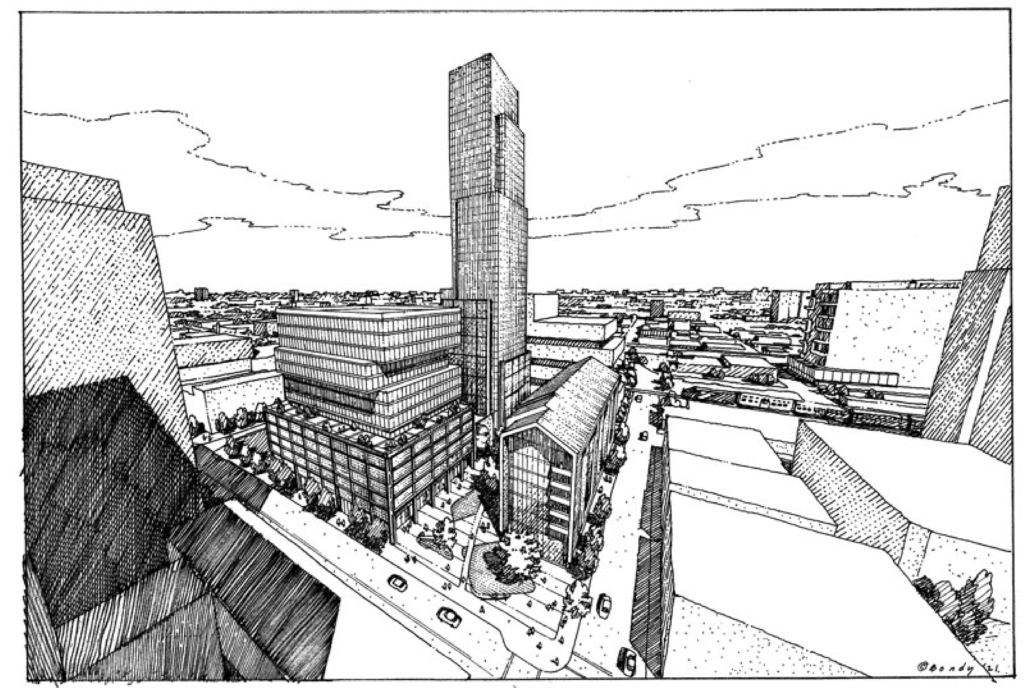 Binding all three of the structures will be a large outdoor plaza with multiple planters and plenty of trees, the linear space will complement that of 1215 W Fulton Market across the street which is also led by Fulton Street Companies. That property, a 34-story, 433-unit tower is anticipating a potential May groundbreaking as it secures 90 percent of its financing. The company is also close to securing an anchor tenant for 917 W Fulton Street, an 11-story 530,000-square-foot office building. Both are designed by Morris Adjmi Architects. 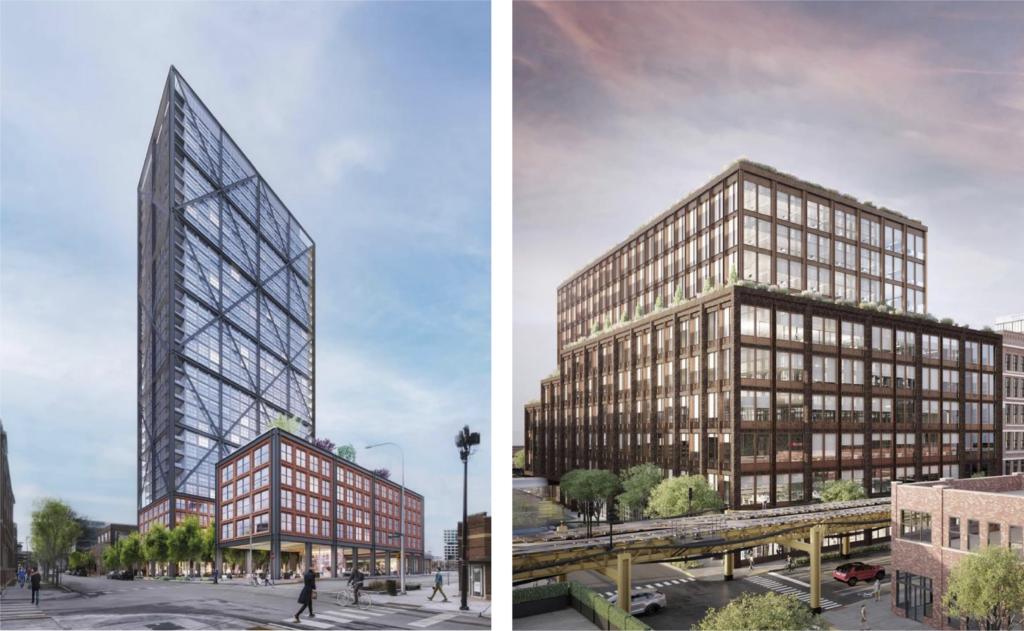 The three-building $600 million development joins a slew of new residential projects in the area as restrictions recently lifted, as well as adds to the growing life-science industry in the city. Its location in a predominantly industrial area will hopefully allow for its height to remain, as the design now heads through the standard approval process needed to break ground, for which no timeline has been established at the moment. Fulton Street Companies is also currently designing a 450-unit building at 1325 W Randolph Street to be revealed in the near future.