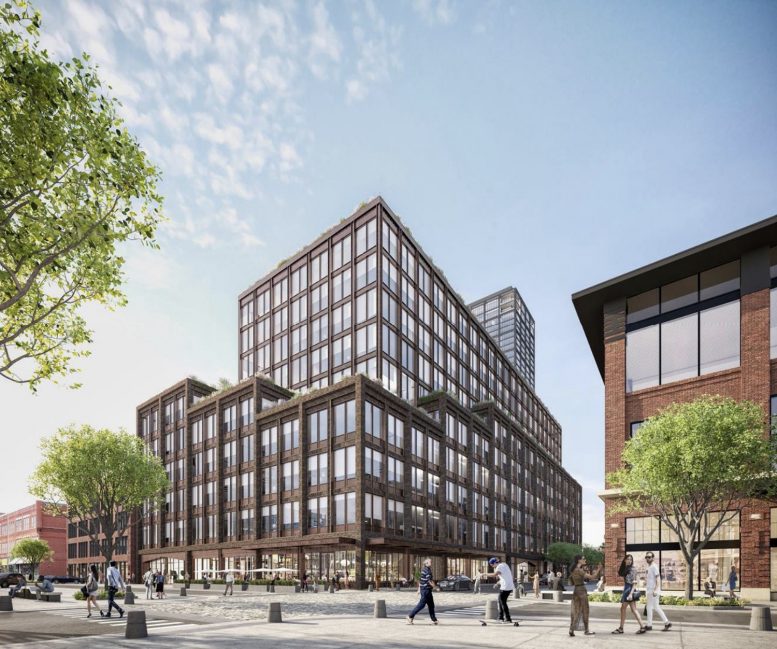 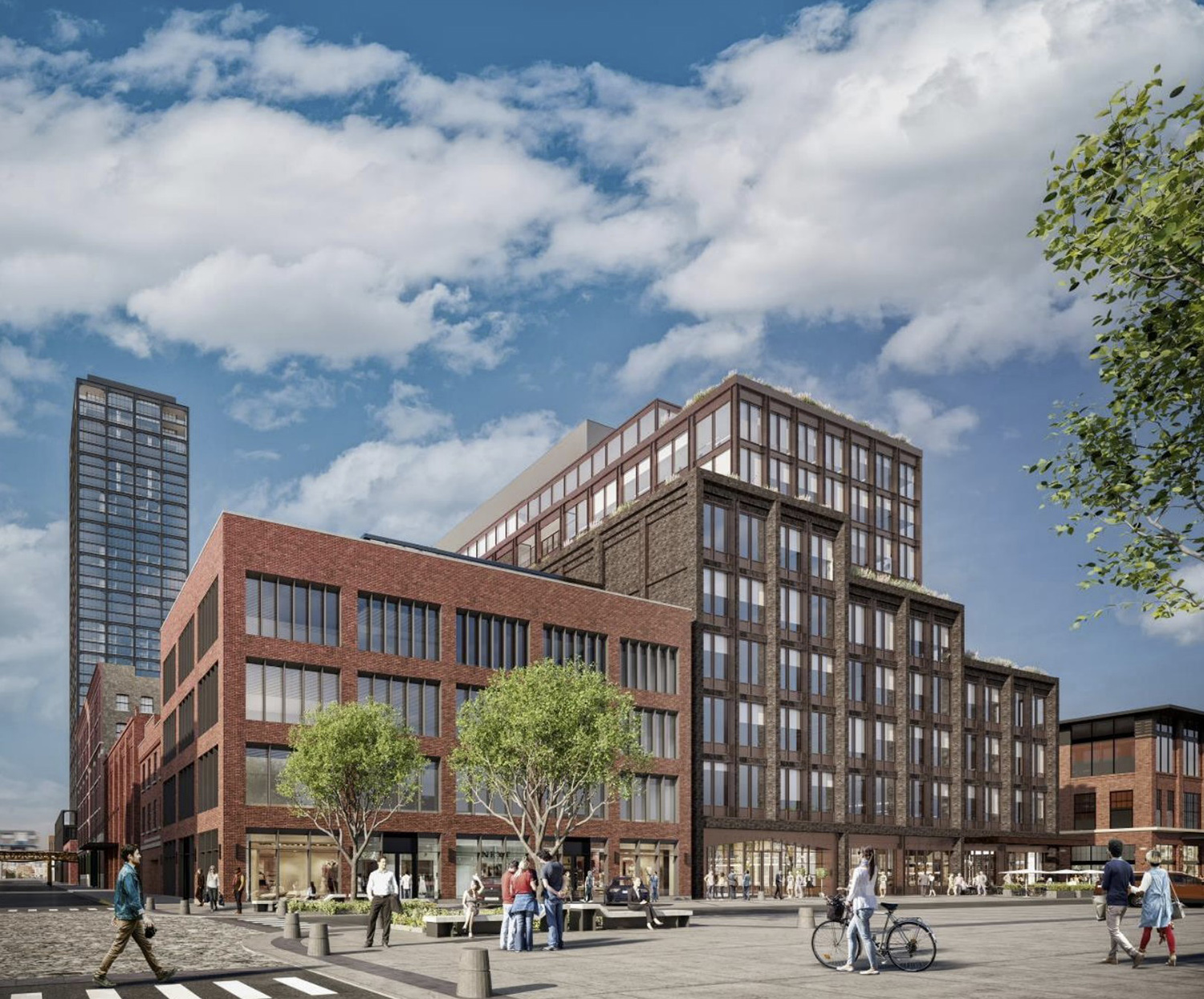 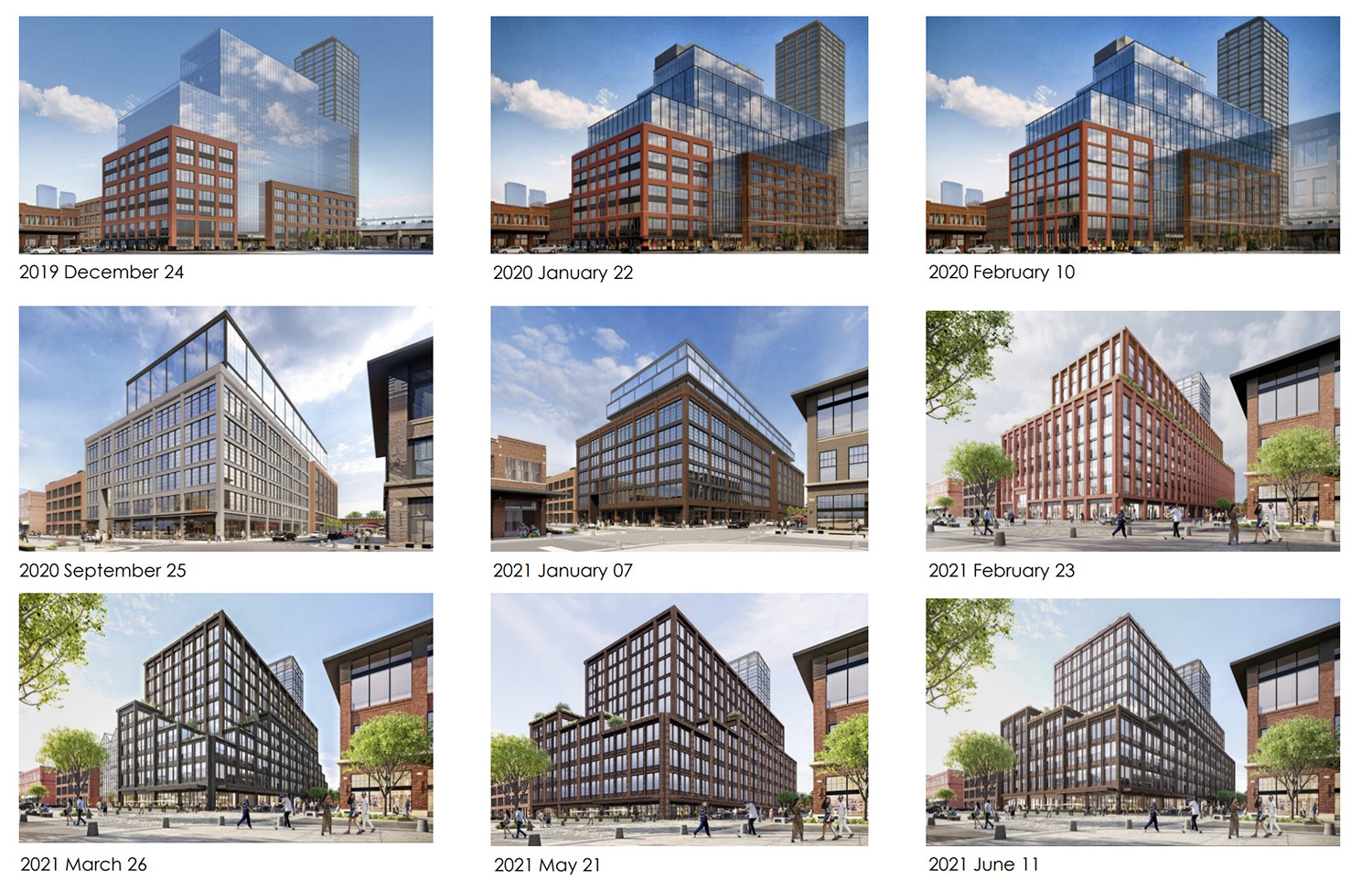 Since the initial conception of the plan in December 2019, the development has gone through nine revisions of the design. Over the course of almost two years, the design has been updated to improve the building’s integration into the surrounding context. The version from February 2021 called for an upper and lower massing of the volume where the lower portion maintained the historic street wall and the upper portion stepped back from the property line to create relief.

The current proposed massing erodes the corner of the lower portion at the corner of W Fulton Market and N Sangamon Street, stepping up and down to reference the heights of surrounding structures. The remainder of the lower portion will remain built up to the property to maintain the street wall for its first six floors. The setbacks of the upper massing have shifted, setting back from the north and south elevations 28 feet, while only 14 feet on the west elevation. The 11th floor will set back further from the upper mass, obscuring it from view at W Fulton Market and N Sangamon Street. 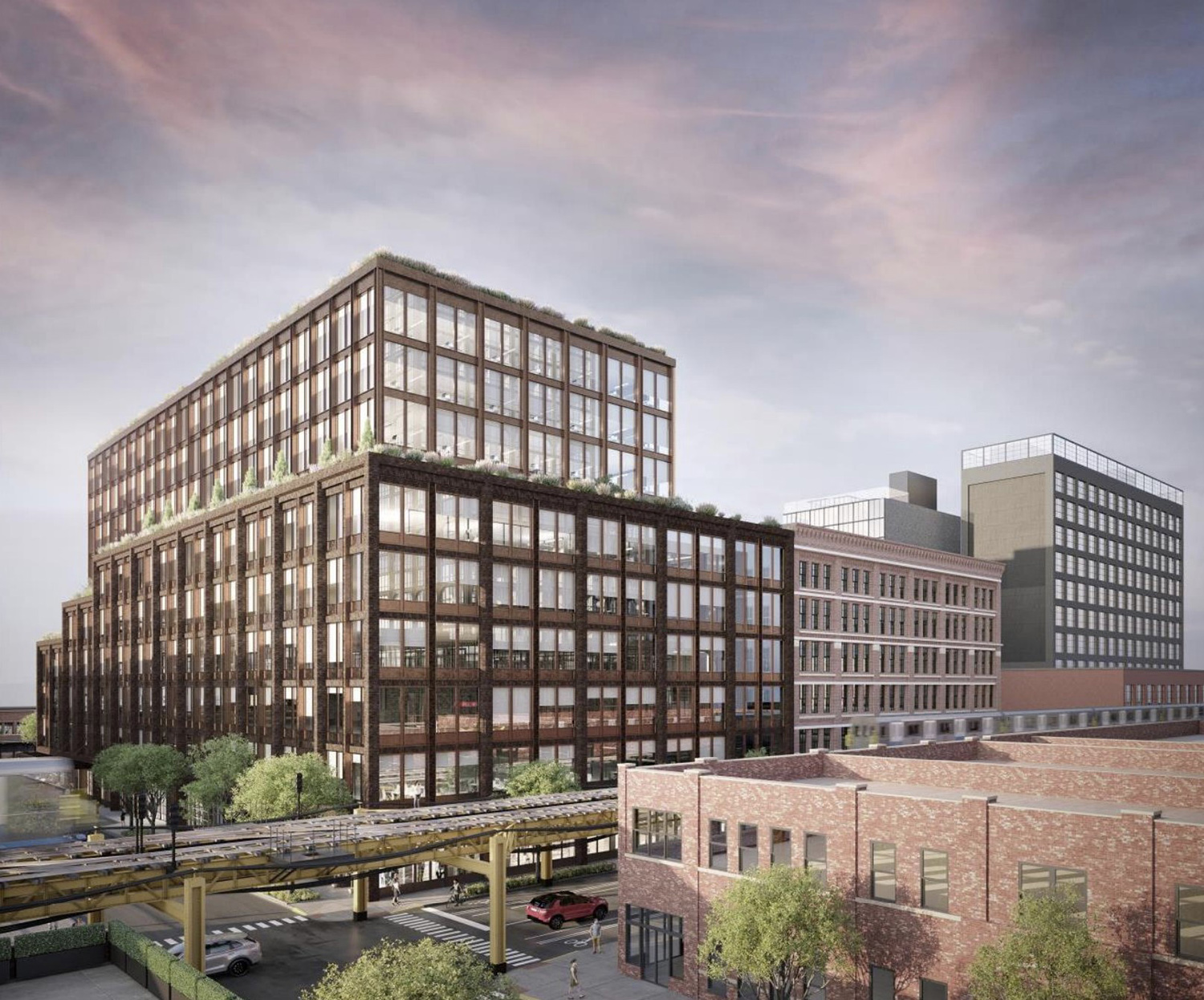 The design of the edifice was informed by the historic modules and proportions found in the surrounding historic district. The facade system incorporates primary and secondary vertical piers with inset spandrels. The upper levels have a more regular vertical pier width with larger windows that include central dividing mullions and horizontal metal spandrels. Outdoor terraces are provided at the setbacks, using safety walls to retain the character of the enclosure by avoiding the use of metal railings. Brick cladding is used in varying patterns on the lower floors, while the upper floors are clad in metal paneling. 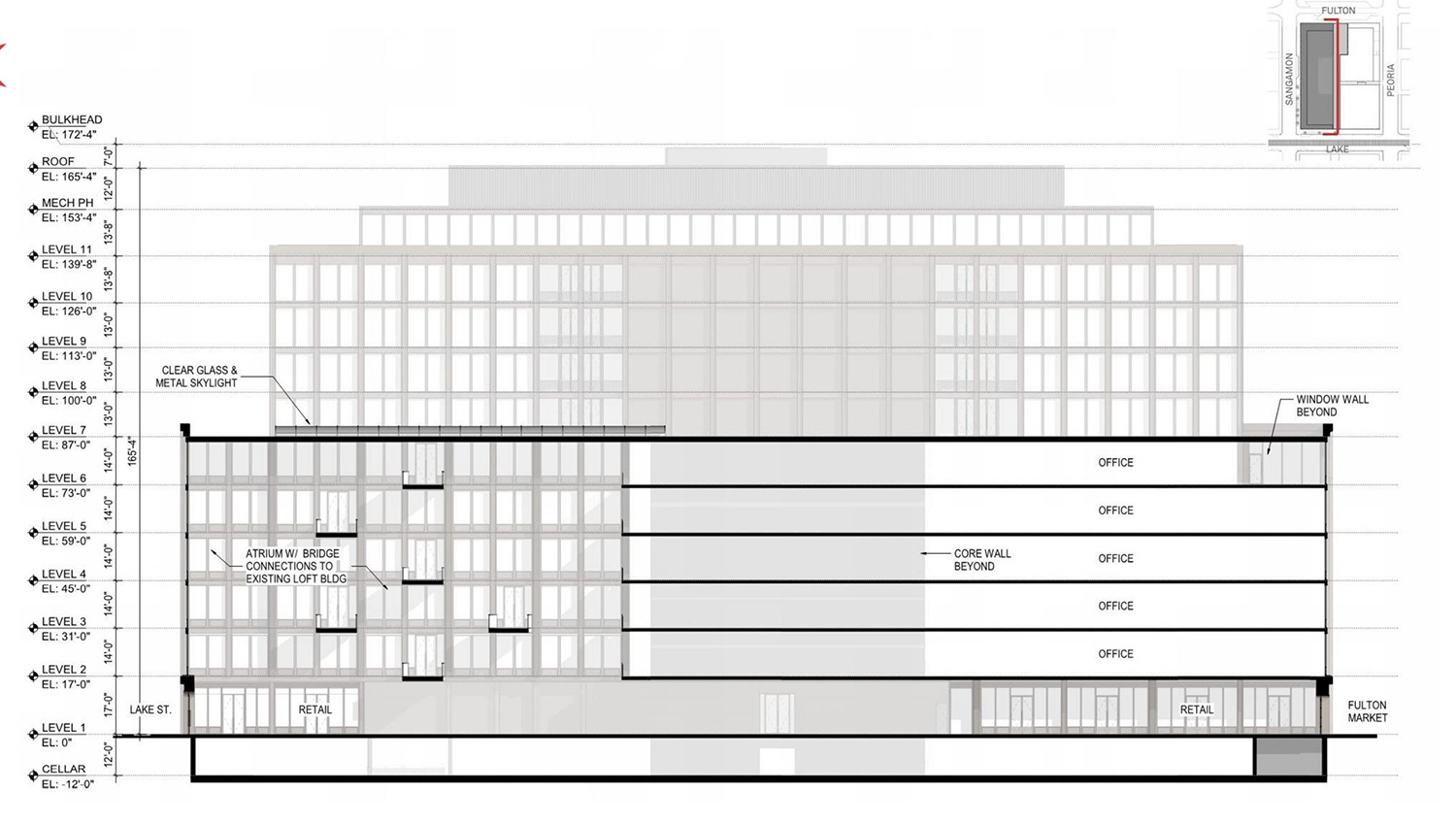 The plan includes the rehabilitation of the historic warehouse structure at 800 W Lake Street. The new construction will be connected via an enclosed atrium between the two edifices. Upper levels will be reached via skybridges. The modifications to the historic structure are only along this secondary elevation and will only be visible from the inside of the atrium. Originally expressed as a curtain wall addition, the atrium spine will be faced in the same way as the rest of the new construction to retain a facade expression that is more in character with the district. 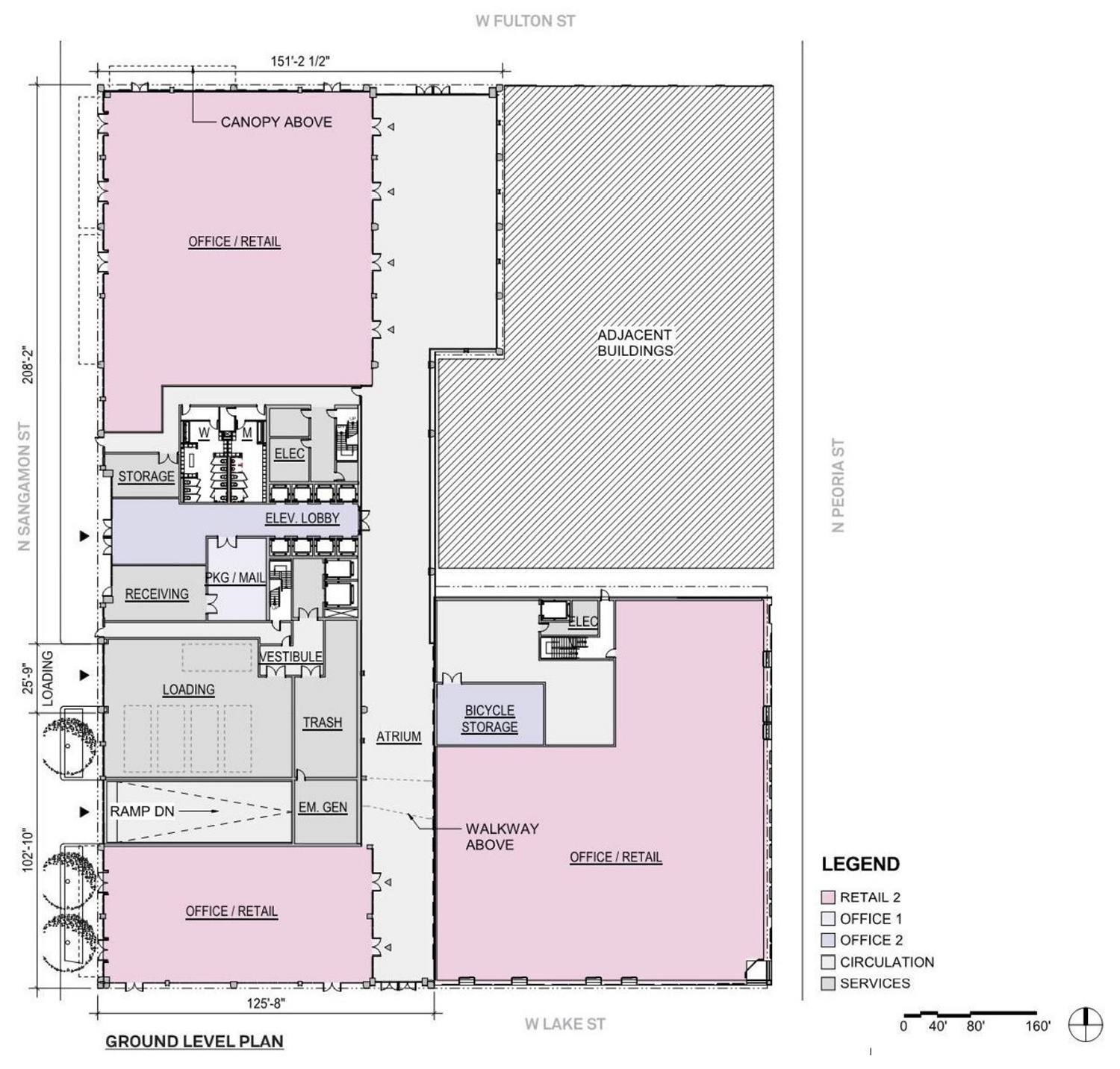 Located within the existing Fulton-Randolph Market District, the site’s existing zoning is C1-1 and C1-2. The proposal will rezone the site to DX-5 and ultimately a Planned Development. The $250 million development has now received approvals from the Permit Review Committee, the Chicago Plan Commission, the zoning committee and the full Chicago City Council. With all approvals acquired, construction is expected to last 18 months once commenced.