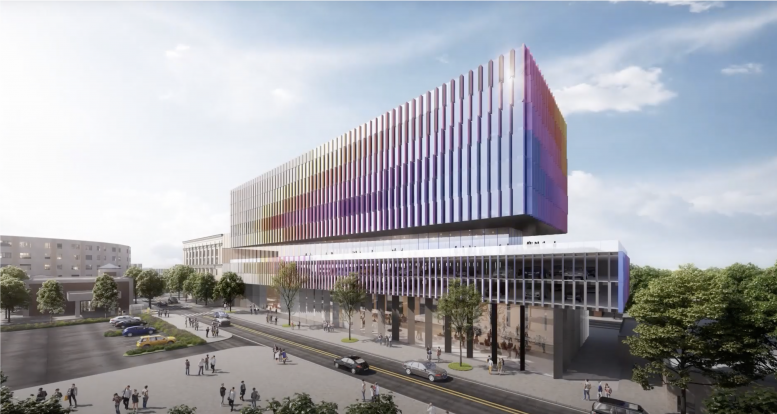 Invest South/West has revealed two new mixed-use development schemes for its RFP site at 4000 W North Avenue in Humboldt Park. The site sits on the corner of W North Avenue and N Pulaski Road and is made up of the landmarked Pioneer Trust and Saving Bank along with its .75-acre parking lot to the north. Goals for the RFP include new commercial space, rental and for-sale housing, and public spaces with the opportunity to celebrate local culture.

Pioneer Trust and Saving Bank was built in 1924 and designed by German architect Karl M. Vitzthum who moved to Chicago in 1914 and designed over 50 bank buildings in his time. The classical revival style monumental building was described as ‘Chicago’s most beautiful bank’ upon opening. Rising five stories tall and housing a three-story central banking hall, the building was purchased by the Puerto Rican-based bank Banco Popular in the mid 1990s. The building was then abandoned in 2008 when the bank moved to a new location nearby. Since then it has fallen into disrepair and will be revitalized with this RFP. 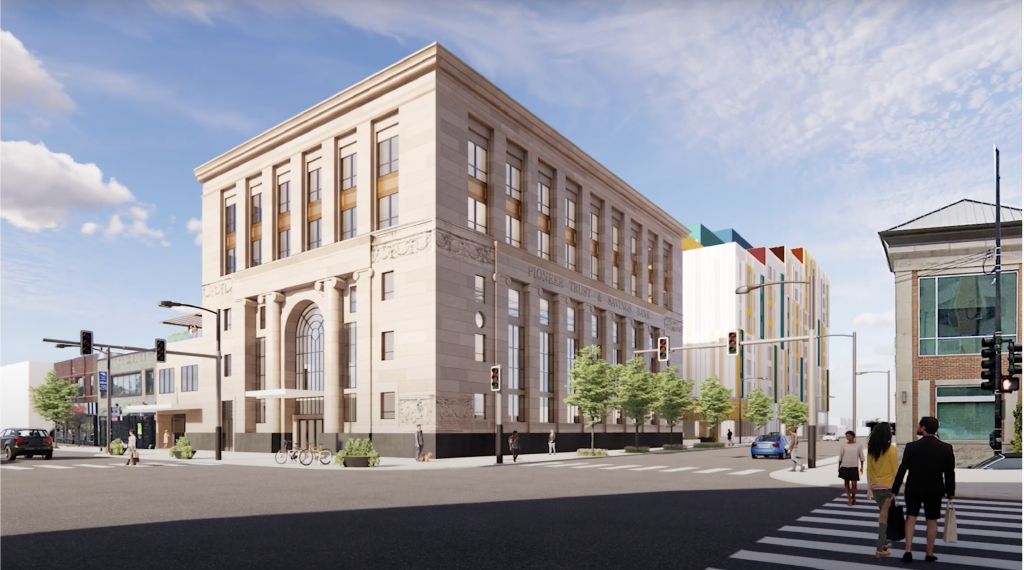 Rendering of restored bank and new structure by HED Architects

Los Pioneros, or the pioneers, is the first proposal being brought forward by developer Hispanic Housing Development Corporation (HHDC) with 45 years of experience in the area. Partnering with HED Architects to design the redevelopment of the existing bank building and Latino-owned UrbanWorks for the new 11-story addition. The redeveloped bank building will turn the existing three-story banking hall into a new arts and library center, featuring permanent exhibits on local artists. Above that, the top two floors of the structure will be redesigned to house new offices for Primecare Health and Rincon Family services, both bringing long-term healthcare to the neighborhood. 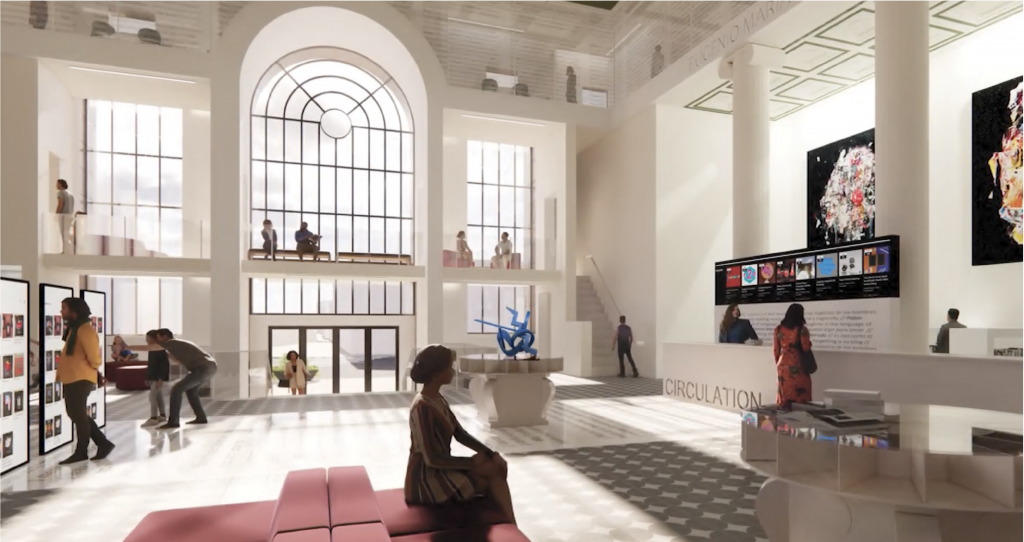 The new addition will sit on the existing parking lot, leaving a gap between the two structures that will be filled with a new entry plaza on the east side, and a glassy, double height connecting structure on the west side. The majority of the new addition will hold 76 residential units divided into one-, two-, and three-bedroom apartments aimed at families. While the ground floor of the building will be home to a second location of neighborhood favorite Nellie’s Restaurant, the multi-tiered top floors will hold private roof terraces for residents as well as solar panels to help with energy cost. 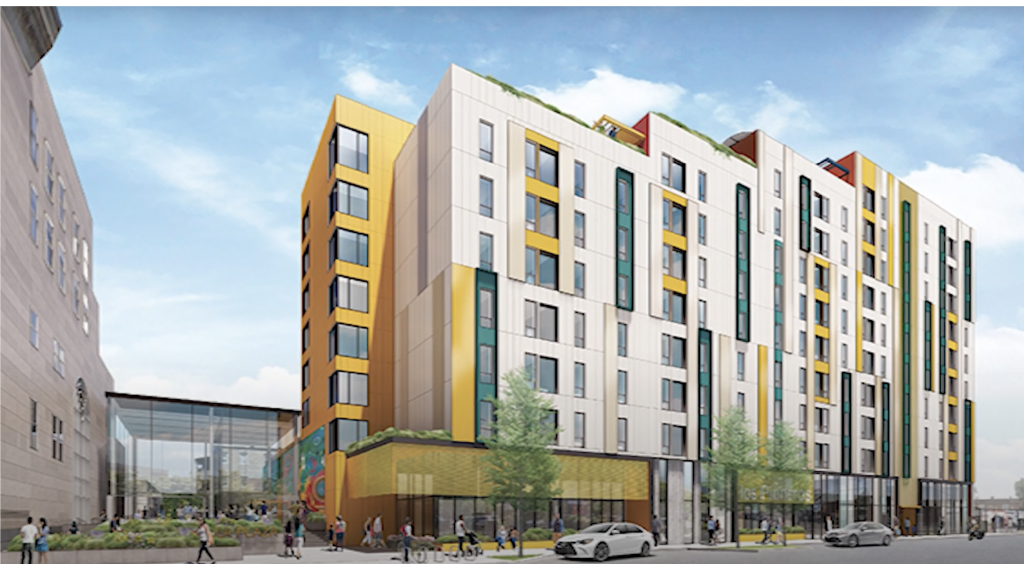 Joining the restaurant on the first floor to continue the theme of community engagement and betterment is a new space for En Las Tablas Performing Arts, and the Repertorio Latino Theater Company, both locally operated bi-lingual performance organizations. There will also be 130 parking spaces in the project both for residents and visitors to the site. The $73.4 million project will be funded with a mix of tax credits, debts, TIF, grants and more, although HDDC did state it was too early into planning for final financial numbers. 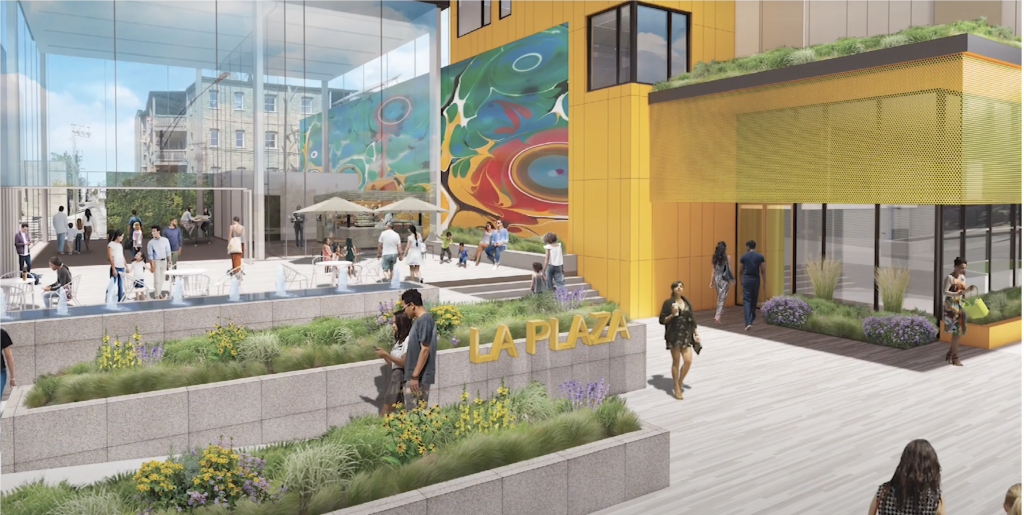 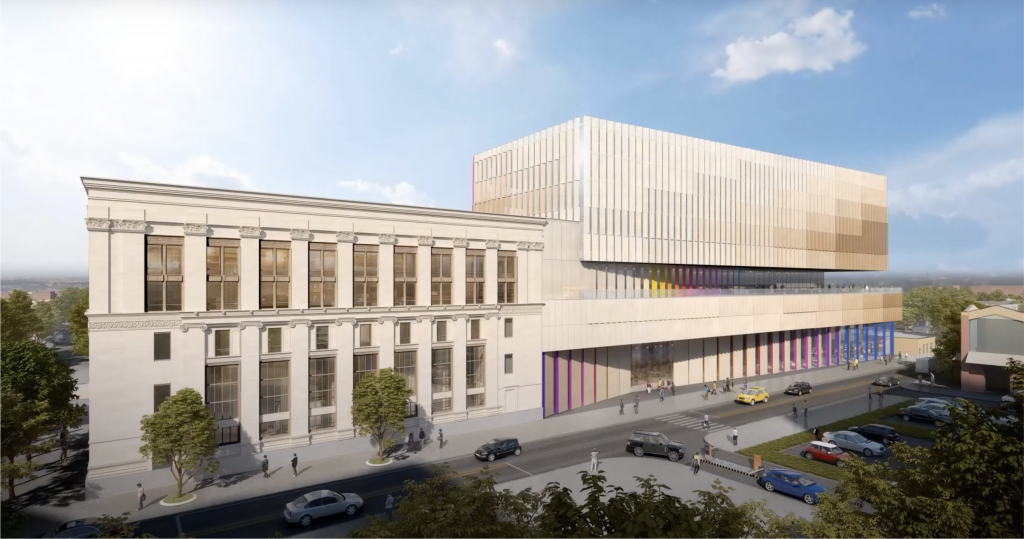 Team Pioneros, or the pioneer team, is the second proposal being pitched by Park Row Development in collaboration with multiple firms making up the 100 percent Latino-owned team. Designer JGMA envisions the new building as a continuation of the existing bank building that highlights the future of the neighborhood and is meant to be experienced from all sides with a multi-colored facade. 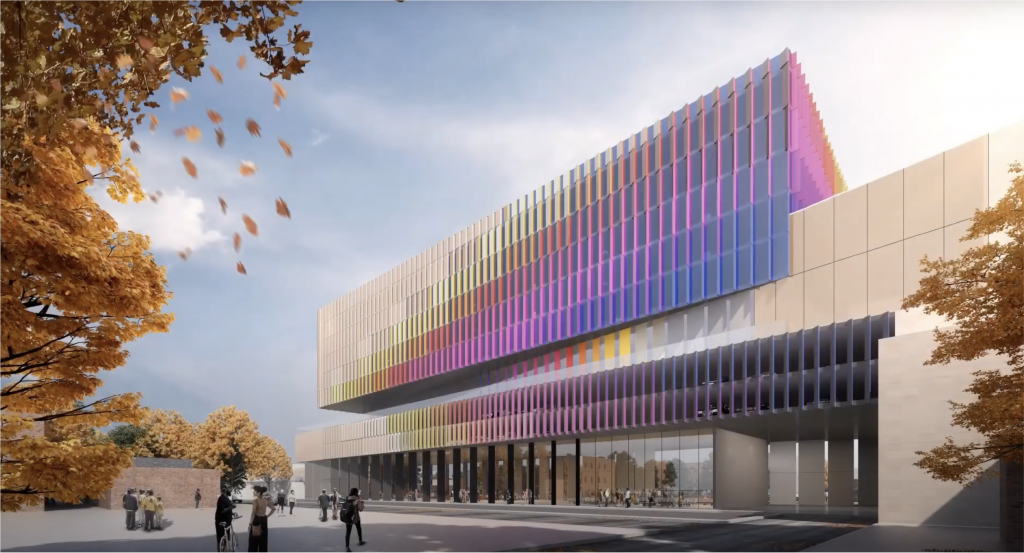 Restoring the bank building into a center for Latino commerce would be the first goal of the project, to do this JGMA proposes anchoring the building themselves by moving their River North office to the top two floors of the refurbished structure. The lower three floors would become a cultural hub, incubator, and workspace in collaboration with the Business Technology Education Center (BTEC) and the Latino architects organization Arquitectos.

The new addition seeks to stretch the past into the future with a design that directly connects to the north side of the bank. This new construction will house a public plaza and a new Chicago Public Library branch on the first floor, with two garage levels holding 114 parking spaces directly above. Setting back from the lower levels, the fourth floor would be used by Humboldt Park Health providing residents and locals alike various services, a large community room, and an expansive outdoor amenity space.

Perched on top of all that will be the residential portion of the design, the remaining floors will round out the nine-story structure with 75 apartment units. JGMA stated that they wanted the housing portion to be put on a pedestal allowing for all residents to have a view, these units will be split into 43 for those making 60 percent of the Area Median Income (AMI) and 32 for those making 30 percent AMI. The 218,099-square-foot building will come with a price tag of $52.5 million similarly funded by TIF, credits, debt, and public library funding. 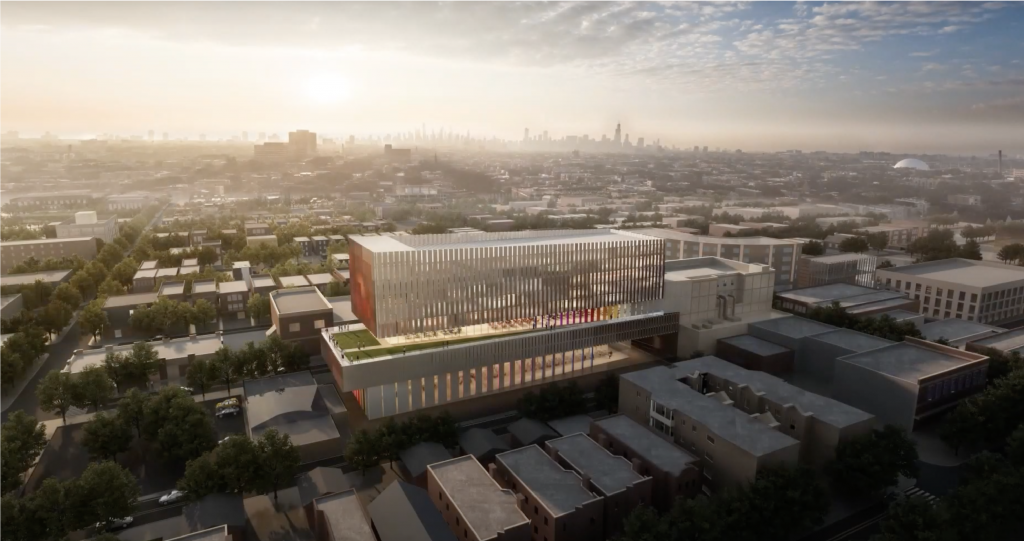 Both proposals have been presented to the community and will now await input before a finalist is chosen. The winning proposal will need to go through all of the typical city regulations and planning processes as needed before construction could begin. Residents can voice their opinion on both designs via scorecards available in both English and Spanish. Breve información en Español sobre los dos proyectos del Pioneer Bank RFP, se puede encontrar en las dos ultimas páginas aquí.