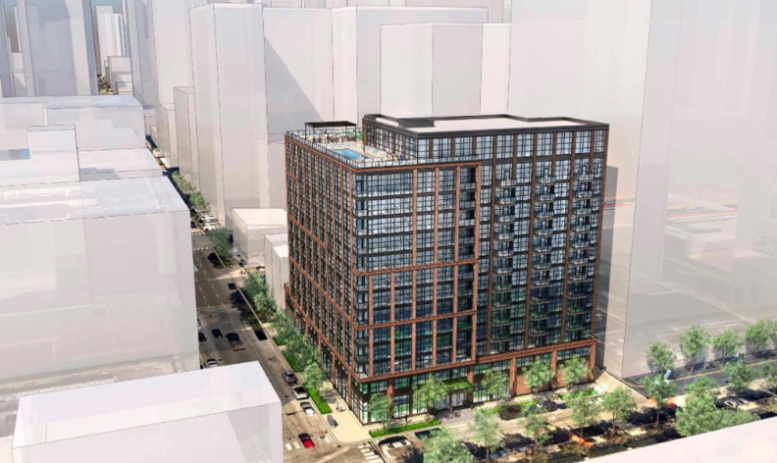 Initial demolition permits have been issued for the mixed-use development at 566 W Van Buren Street in West Loop Gate. Located on the northeast corner with S Jefferson Street, the new structure will replace a large surface parking lot along with two existing commercial buildings dating back to the 1890s. Led by co-developers Riverside Investment and Blue Star Properties, the project is being designed by Antunovich Associates who worked on the recently completed 609 W Randolph Street nearby in a similar industrial style. 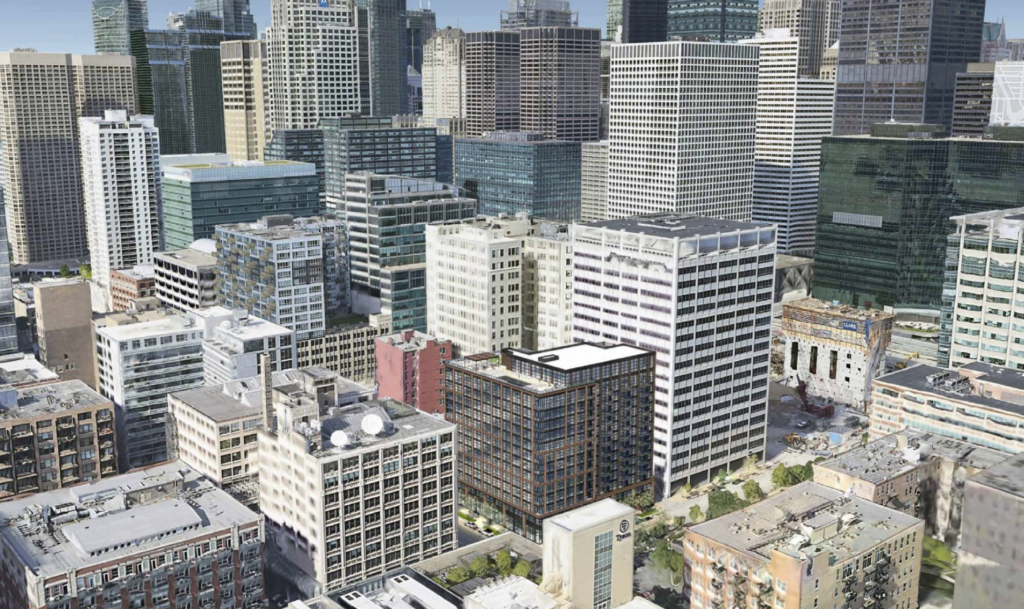 The proposal is Riverside’s first residential project in Chicago, however they have been behind various recent office towers in the city including 110 Wacker and the recently opened BMO Tower two blocks from this site. The 26,000-square-foot site was acquired by both them and Blue Star, whose president helped develop the food hall within the Old Post Office within walking distance, and will soon see the demolition of the two existing structures while they await foundation permits next. 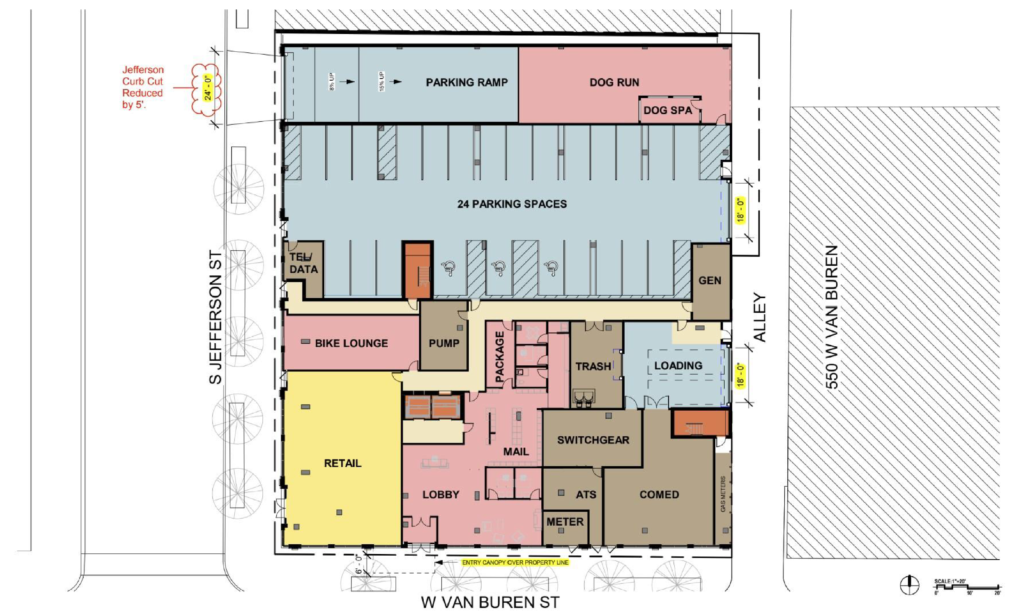 With the development being planned as-of-right, it did not require zoning changes which allowed it to move quickly toward construction after being announced in July of this year. Replacing the parking lot will be a 14-story, 155-foot-tall mid-rise whose first floor will contain a 2,500-square-foot corner retail space, residential lobby on W Van Buren Street, a dog run, 99-bicycle parking room, 24 parking stalls, and a ramp to the second floor parking garage. That second story will hold 52 additional spaces for a total of 76 spaces as it is near enough transit to have a lowered count. 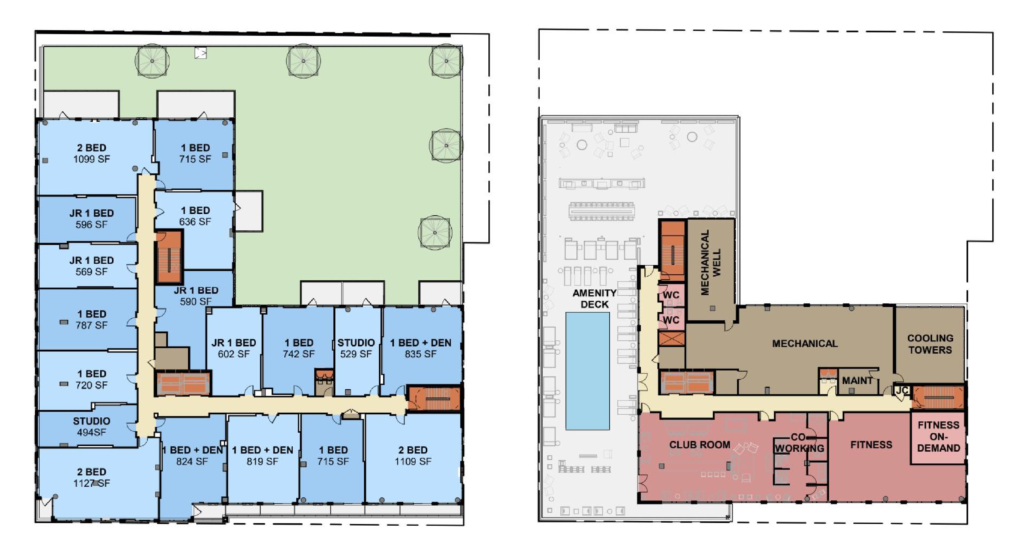 Above those will be 198 residential units made up of studios averaging ranging from 490 to 530 square feet, convertibles ranging from 570 to 602 square feet, one-bedrooms ranging from 636 to 835 square- feet with a den, and two-bedroom layouts averaging around 1,100 square feet. Some of the apartments will boast inset balconies while others will have larger cantilever balconies as the massing steps back into an L-shape in the residential floors. Other amenities will include a rooftop lounge, fitness center, co-working area, and outdoor pool deck. 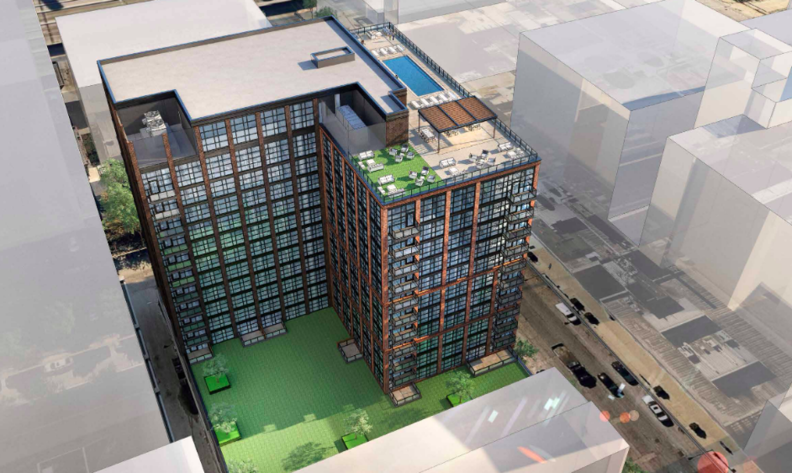 Clad in masonry and a black mullion glass facade, residents of the new property will arguably have some of the best transit connections in the city with bus access to CTA Routes 1, 7, 28, 37, 60, 121, 124, 125, 126, 151, 157, and 192. CTA Blue Line at Clinton station and Chicago Union Station are all within a five-minute walk. With a price tag between $75 to 90 million according to Riverside, Lendlease will serve as the general contractor moving forward although no formal construction timeline has been released.