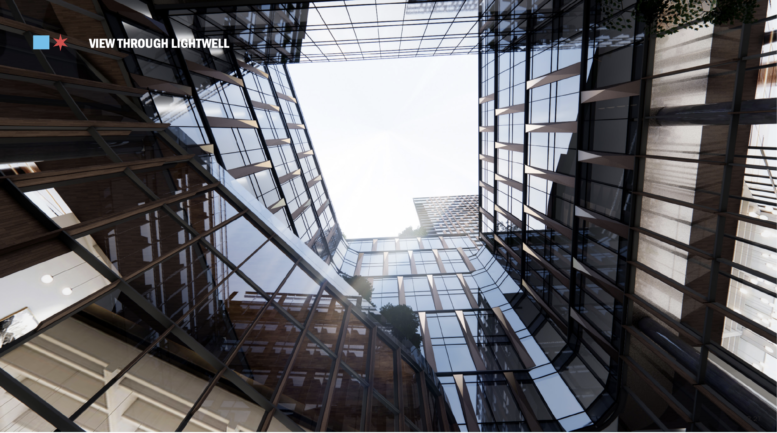 Updated plans have been reviewed by the Committee on Design for the mixed-use development at 170 N Green Street in Fulton Market. The project has received a few design updates with new details being presented to a committee packed with famed local designers. The development team is comprised of CRG, which is part of St. Louis-based Clayco, and Shapack Partners who are no strangers to the area having developed 167 N Green Street directly east of the site, and are partnering with local design firm Lamar Johnson Collaborative on the new multi-tower structure. 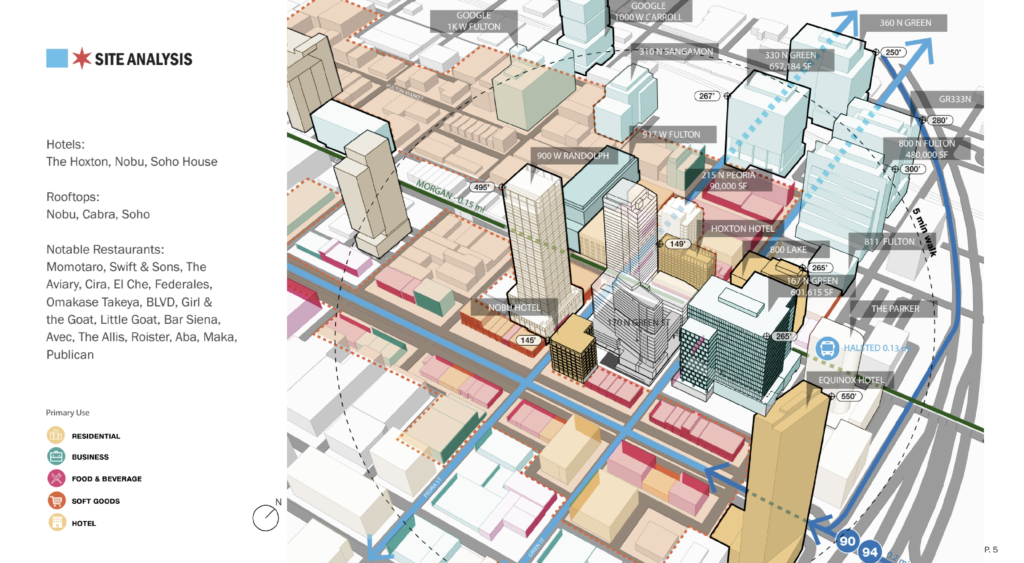 The project replaces the massive Bridgford Foods plant that occupied the site for many years. After proposing their own 17-story design, the Bridgford Foods company sold the land for $60 million in 2020 with the structure currently being demolished to prepare the 62,600-square-foot site. Comments from the committee focused on the base of the complex which will feature a cut through plaza similar to the adjoining Mews that recently hosted the opening of their first retail tenant Foxtrot Market. 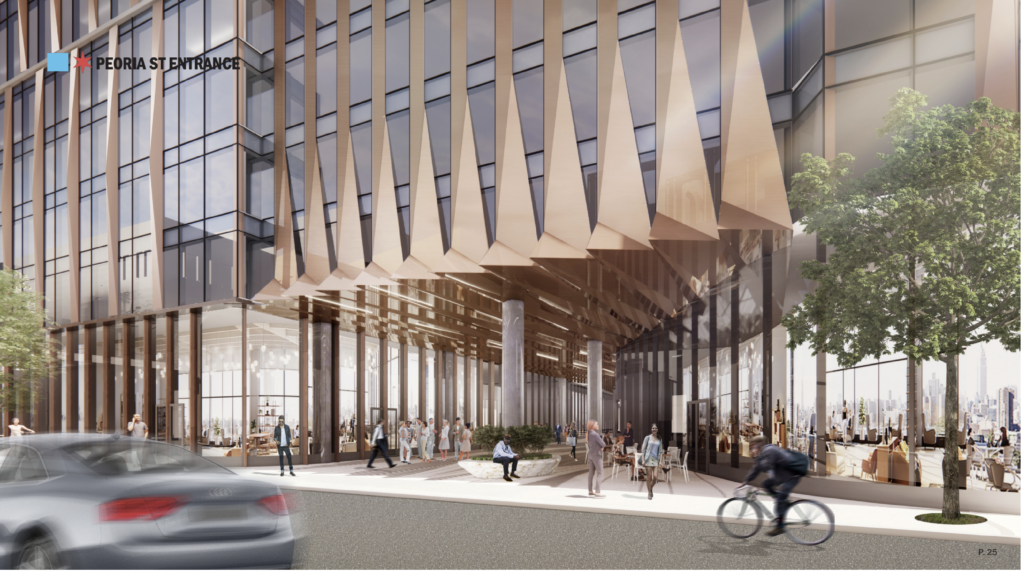 The overall building’s design begins with its large U-shaped podium rising 13 stories, around 158 feet tall with various setbacks and rooftop outdoor decks. Cutting through the ground floor will be a 13,000-square-foot plaza similar to the Mews, whose entrances are roughly offset 12 feet from each other, an issue brought up by the committee. The plaza will be anchored by the large lobby and restaurant space of the hotel tower, plenty of retail spaces, residential and office lobbies, as well as the entrance to the 235-vehicle parking garage from N Peoria Street. 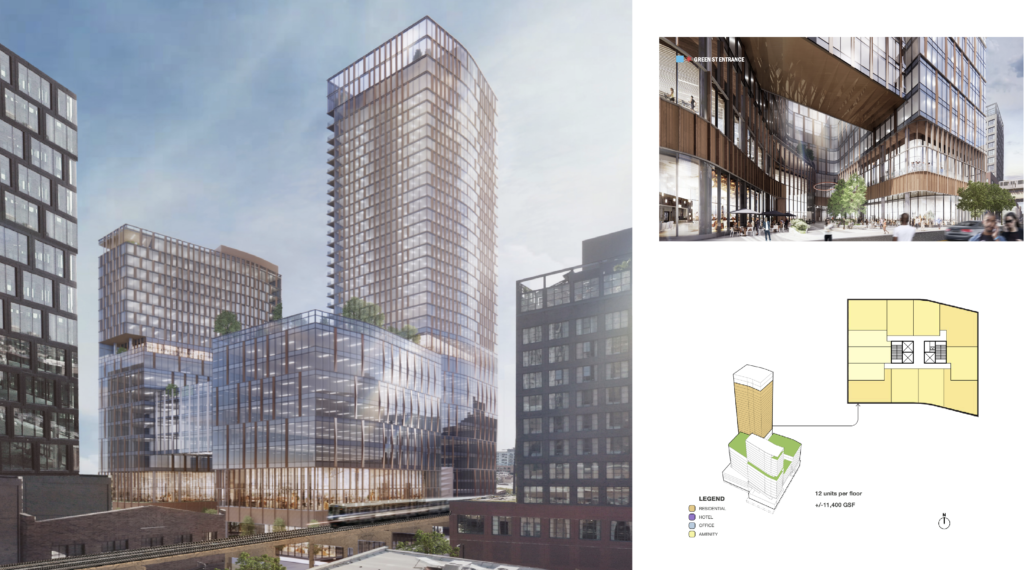 The plaza went through a few design iterations with more formal and geodesic plans proposed with the more natural flowing and landscaped design moving forward. One of the main changes from the initial details is the removal of the cut through from the north end of the building to W Lake Street. Above the main area of the plaza is a large opening that will help bring light into the plaza with a bridge structure with office spaces connecting the U-shape and the shade-preferring trees to address the lack of direct light the area will receive. 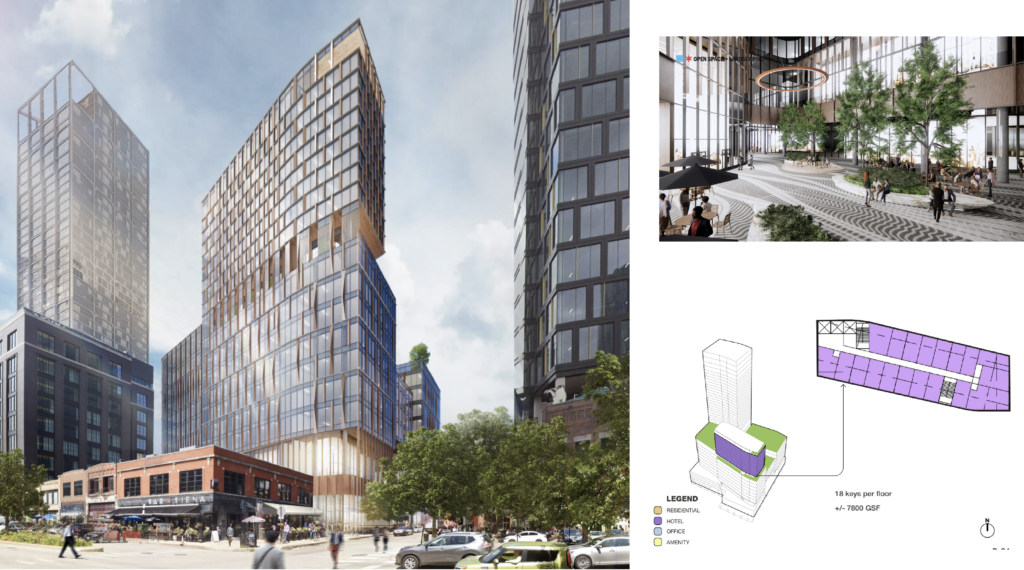 Lamar Johnson Collaborative expects roughly 7,000 people to move through the site a day utilizing the 350,000 square feet of office space held in the podium along with the anchoring 40-story, 443-foot-tall residential tower on the northwest corner. Receiving a slight haircut of 12 feet in height, it will hold 275 residential units split into 12 apartments per floor with at least three different bedroom count layouts. On the southeast corner, a linear 23-story, 280-foot-tall tower will hold 150 hotel rooms starting on floor 14 with 18 rooms per floor.

The final design being proposed came from four final massing studies that included the main tower being on the northeast corner, hotel on the southwest, mixing both into a singular stepping tower and more, with the final layout being chosen due to maximizing sunlight, views, and pedestrian flow. The current copper-colored folded metal panel facade will alternate as it rises with sections of the podium containing inset balconies. 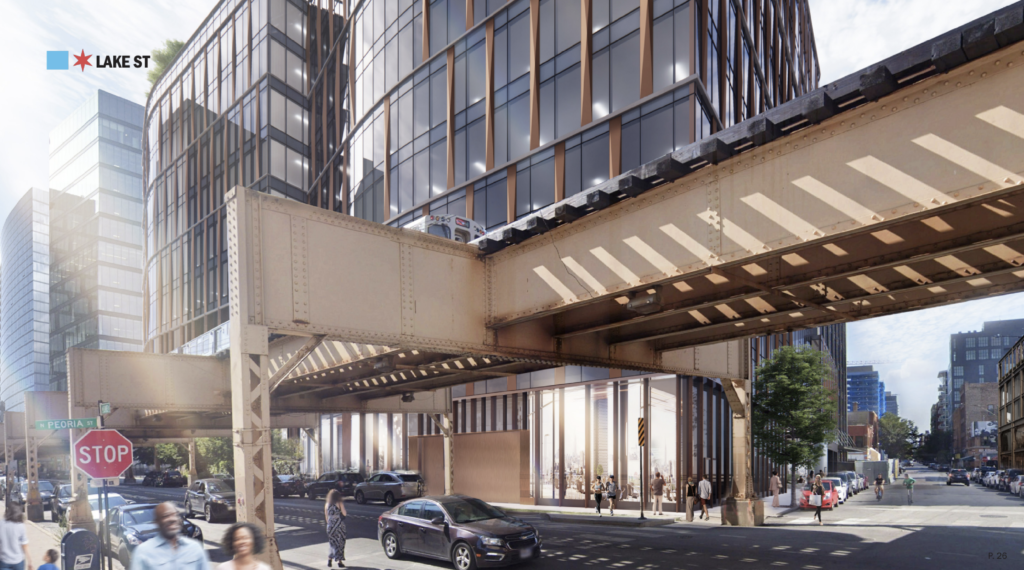 Overall the design was met with support with the architects mentioning locals enjoyed the building’s planning and programming during multiple outreach meetings. While there’s no formal construction timeline, the current demolition of the site and progression of design approval shows the developer is eager to break ground on the project soon.