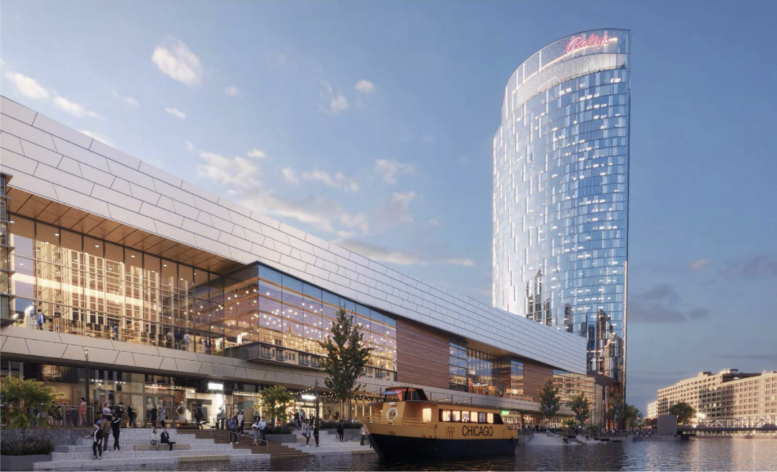 Rendering of new Ballys casino and hotel tower by SCB

Updated plans have been revealed for the upcoming Bally’s casino at 777 W Chicago Avenue in River West for the Committee on Design. Located on the corner with N Halsted Street, the new development replaces the existing vacant Chicago Tribune print facility after a multi-year selection process. The project itself is being developed by Rhode Island-based Bally’s who recently sold their Las Vegas strip property, they have partnered up with local architecture firm SCB on the design which has seen further development since we last covered the riverfront proposal. 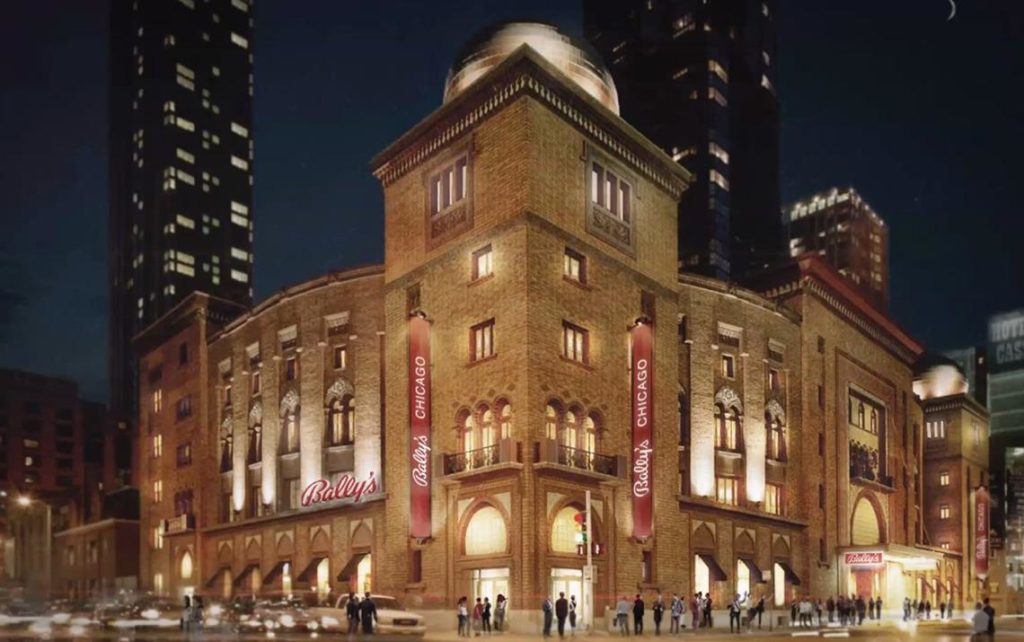 Rendering of temporary casino at the Medinah Temple via Bally’s

In this article we will take a deep dive of the different zones of the complex and its surrounding planned development beginning with how we got here. A city casino has been in the works since gambling was legalized back in 2019, after many hurdles five bids were revealed in October 2021 before being narrowed down to three earlier this year. Bally’s was selected as the winner this past May and received City Council approval shortly after, it is now awaiting final approval from the Illinois gambling board. 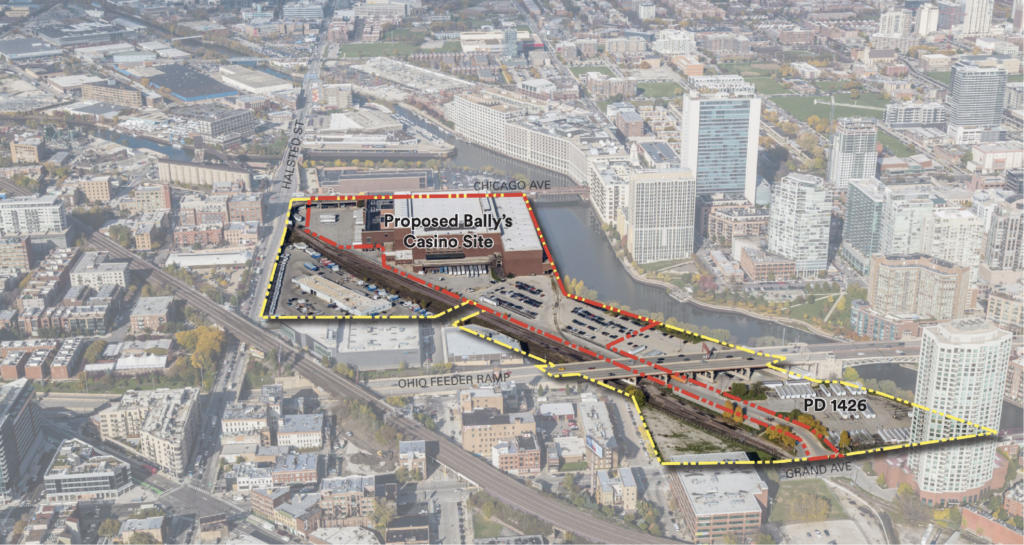 While the final property is being designed and built, a temporary location is scheduled to open next summer within the old Medinah Temple in River North designed by STL Architects. The 1,200 position gambling center will feature dining and lounges within 45,000 square feet of open space that hopes to run for roughly 24 months. As it closes its doors, the new $1.7 billion, 1 million-square-foot permanent facility will open on the banks of the Chicago River, changing much of the original Planned Development 1426 originally proposed on the site. 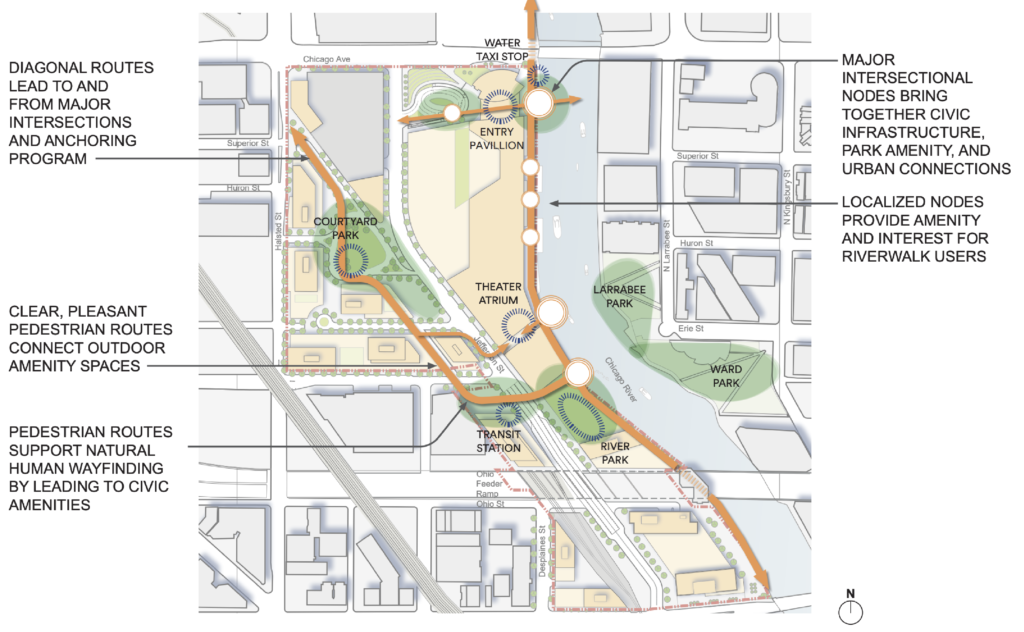 The casino is only part of the greater area which includes air rights over the Union Pacific tracks and although decreasing the total square footage originally proposed, it will see an increase in traffic. To mitigate this the overall site is being designed with nodes of parks and walkways with the riverwalk being one of the main arteries for visitors, which is separated from the courtyard park that will be surrounded by residential towers in the future. Soft edges and rounded paths connect the different aspects of the project: The hotel tower, casino, entertainment building, riverwalk, parking garage, and surrounding structures. 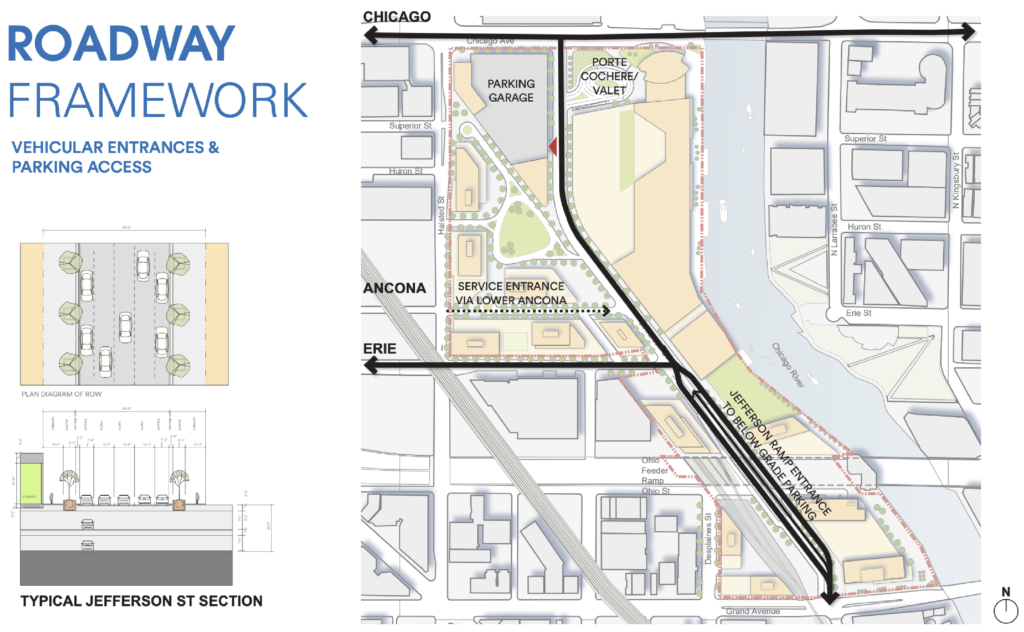 While not much has been revealed, visitors will utilize existing highway ramps and roads to access the property. This will connect to a new central elevated N Jefferson Street containing five lanes of traffic flanked by planters and 10-foot-wide sidewalks, with two levels of street under used to enter the below grade parking garage and delivery areas. Aside from that, Bally’s is proposing a new water taxi stop near the hotel on the north end of the site as well as an undisclosed potential future transit station on W Erie Street, this will connect to a small extension of bike lanes between W Grand Avenue and N Halsted Street.

Anchoring the casino project will be the oval-shaped, 500-foot-tall hotel tower holding 501 rooms split into two categories. Tier 1 rooms will occupy floors three to 26 containing 315 standard rooms and 90 suites on the corners, tier 2 rooms on floors 27 to 34 holding 90 suites, and tier 3 rooms located only on the 35th floor containing four 1,659 square feet super suites and two 1,737 square feet premier suites. Above that floor 36 will hold a double height restaurant as well as rooftop pool, floor 37 will predominantly be open to below with a small private dining room and high roller lounge, all with floor-to-ceiling windows. 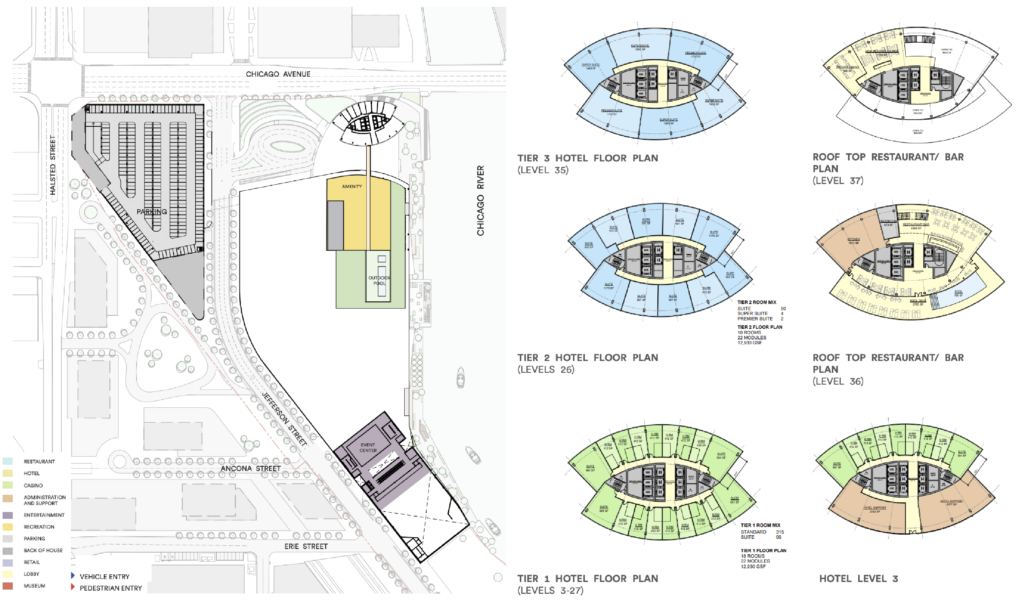 A large amenity level and outdoor pool will be on top of the casino roof and accessed via a bridge from the third floor. Floor two below will feature the hotel lobby along with a stepping winter garden connecting the large landscaped drop-off loop to the riverwalk. It will also be the main connection and entrance between the hotel and casino. The first floor below at river level will contain a double height restaurant connecting to the riverwalk as well. All of which will be clad in a glass curtain wall topped by a dedicated illuminated crown level, adorned by large red Bally’s logo on both sides. 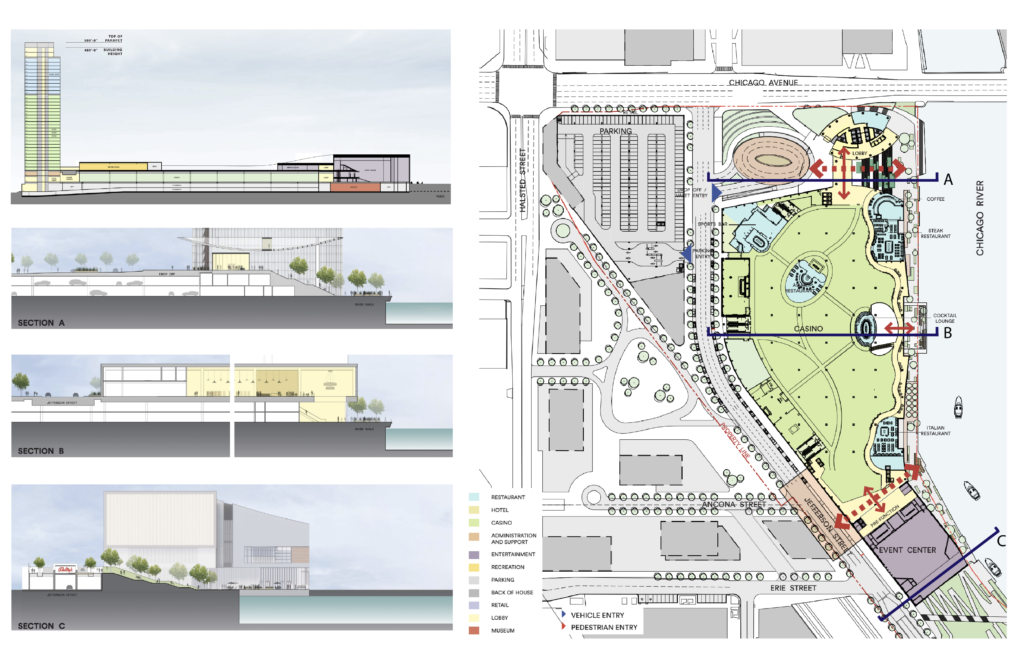 Perhaps the main star of the whole project is the massive casino structure containing 3,400 slots and 170 tables across a large gaming floor. This will be dotted by a sports bar, an Asian and Italian restaurant, a steakhouse, and a cocktail bar flanking stairs to down to the riverwalk. The two floors below will contain large parking garages occupying most of the building footprint with other riverfront amenities on the river level. Unlike most casinos, the eastern wall of the building facing the water will be clad mostly in a curtain wall with metal panel accents. 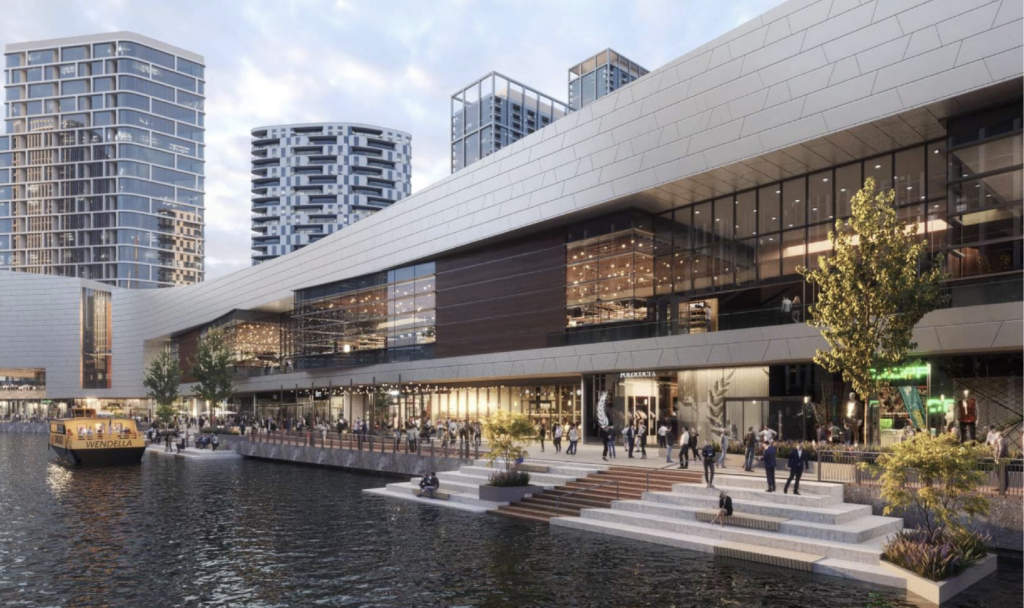 Rendering of riverwalk and entertainment building by SCB

Connected at the southern end of the casino via a glass covered pre-function space will be the new 70,000-square-foot entertainment building. Anchoring the structure will be a 3,000-seat theater spread across the main level and floor above, which will also contain a large event center. Below a small event space with an outdoor deck sits above the river level holding a 20,000-square-foot museum space. This will be predominantly clad in metal panels capped by a decorative southern wall, with curtain wall lining the lower floor.

The new riverwalk will create a public gathering space similar to its successful downtown cousin. Mostly lined by the casino building, it will have direct access to a large poker room, a specialty bar as well as a food hall with outdoor seating, with be the aforementioned hotel restaurant at the northernmost end. A monumental staircase will guide visitors down from W Chicago Avenue to the new water taxi stop, south of there will be seating nooks, market plaza, overlooks, bosque plaza, playscapes, and additional plazas by Site Design Group.

At the southern end, in front of the entertainment building will be a large stepping riverfront park connecting the riverwalk to the main road. It’ll have a forest walk, seating, open lawns, a dog park, gardens, multiple overlooks, and floating wetlands similar to the wild mile nearby. The heavily landscaped park is a change from the originally proposed 1,000 person music venue towards a more community-driven space. Although the pedestrian bridge over the river was removed in this most recent iteration. 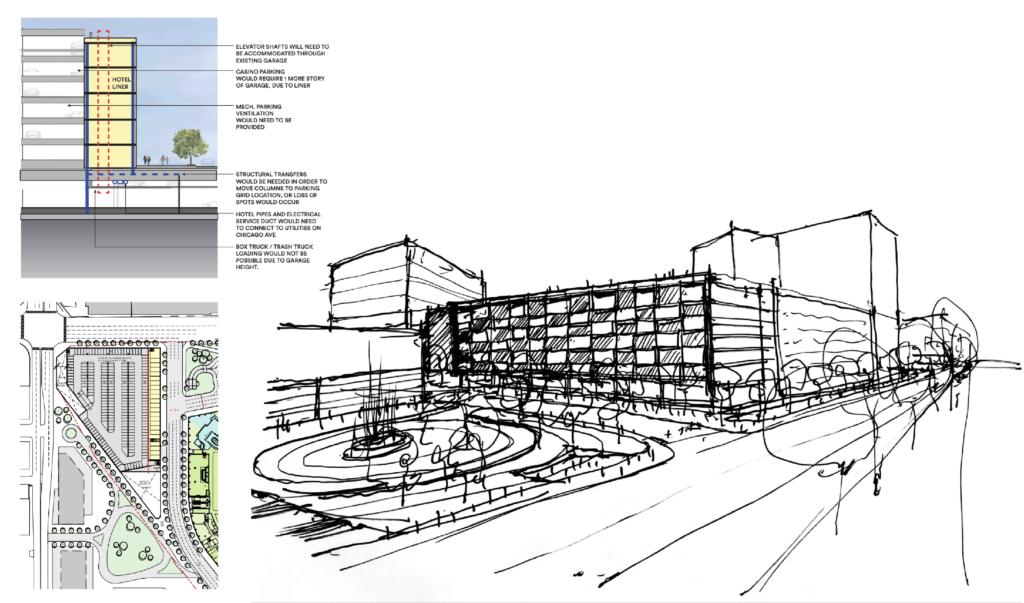 Located on the corner of N Halsted Street and W Chicago Avenue will be a six-story garage holding 1,070 parking spaces, with the potential to add a seventh floor with an additional 214 spaces. This is separate from the underground facility which could bring the project up to 2,000 spots in total. The northwest corner will have a cut out for a future hotel structure along with the southern edge for a residential tower. The architects also explored the possibility of lining the garage with extra hotel rooms but would be costly due to requiring structural load transfers and the seventh parking floor. 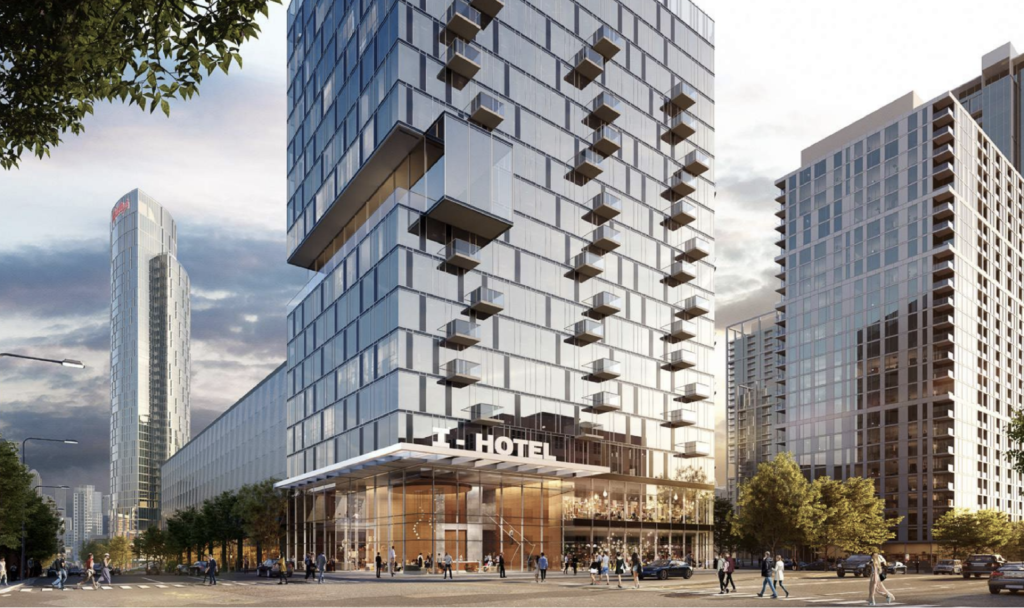 The casino is just part of the larger pie; the planned development itself will be able to hold an additional 14 high rises with new parks, however there currently is no formal design for them. North of the site Canadian based-Onni has purchased the former River District with placeholder masses reaching over 600 feet tall. Onni also owns the site north of that on Goose Island for their five-tower Halsted Point project rising as tall as 691 feet tall. South of the site will be the four-tower NOMA development from Shapack Partners rising 700 feet tall. All in all of these will bring over 5,000 residential units, multiple hotels, and more. 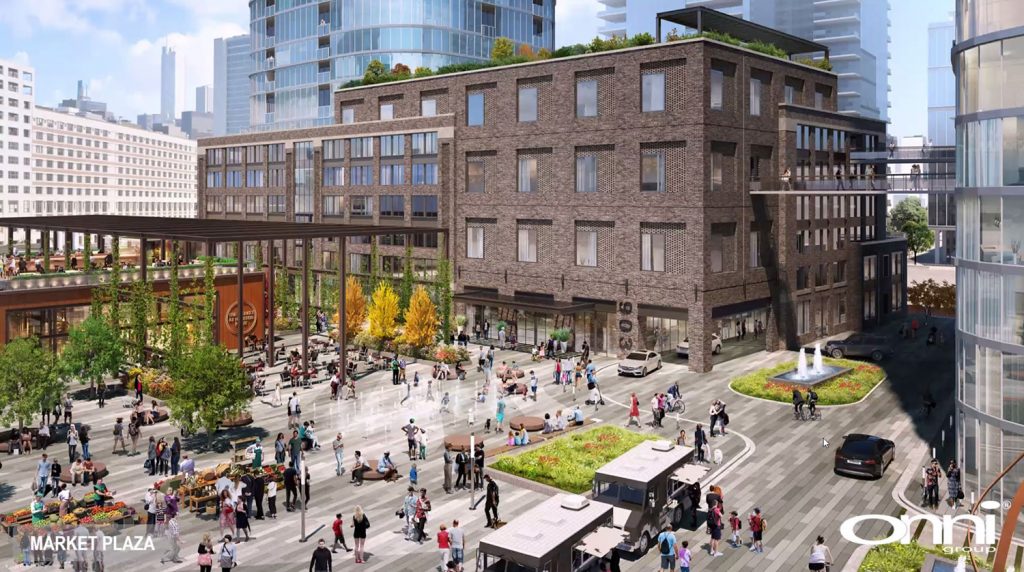 The committee reviewed the proposal, giving feedback to the designers that will now be used to improve the project before it moves on to the permitting process. Work is set to begin early next year with the demolition of the existing building and be complete by the first quarter of 2026 pending no delays, generating 3,000 construction jobs and 3,000 permanent jobs thereafter.