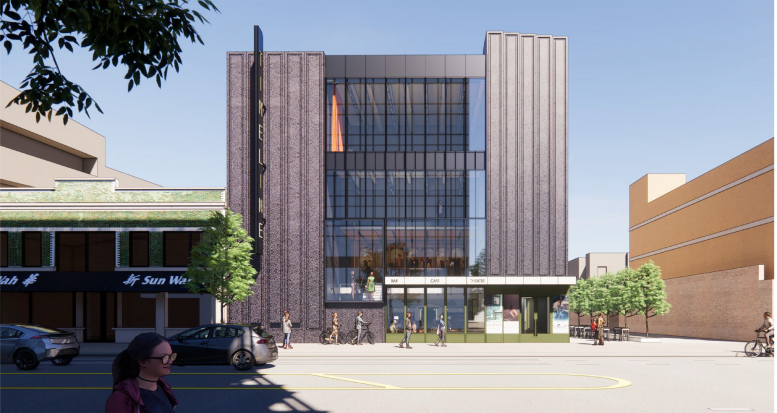 Rendering of new exterior for TimeLine Theater by HGA

Initial Tax Increment Financing (TIF) approval has been granted for the new location of the TimeLine Theater Company at 5033 N Broadway in Uptown. Located just north of the intersection with W Argyle Street, near the CTA Red Line Argyle station which is undergoing renovation, the new arts center will utilize the bones of an existing five-story building while erecting a new facade. The theater itself is developing its new home which received City Council approval late last year and has been owned by the company since 2018, TimeLine is working with local architecture firm HGA on the design that borrows elements from the current structure.

The theater which started in 1997 with only $50 to their name has since grown to become a neighborhood staple with recent original shows like the critically acclaimed ‘Relentless’ moving on to a downtown stage at the Goodman. The multi-phase expansion would allow the company to expose more people to the impactful art produced there; this will be on display within their new flexible multi-configuration 250-seat black box theater that will anchor the renovation of the existing building. It will be accompanied by a large entrance lobby with a cafe and immersive exhibit galleries, along with an upstairs rehearsal space and more.

Section of new performance building for TimeLine Theater by HGA

To the rear, or east end, of the theater, the existing floor will be transformed to new design production, dressing, costuming, green room, and office spaces providing an acoustical buffer. The tracks will also be utilizing the empty land to the rear of the building for a renovation project until 2026, upon completion the second phase will kick off and develop the lot into a second 150-seat theater space and more space to accommodate the theater’s Living History program, which will create an educational space that can also serve as a hall for community meetings and more.

Rendering of lobby cafe for TimeLine Theater by HGA

Future patrons will be able to access the theater via the aforementioned CTA Red Line stop via a three-minute walk, and bus service for CTA Route 36 at the front door. This will allow the project to proceed without building any extra parking although the company hopes to secure 100-vehicle spaces in a garage nearby. If fully approved, it would grant the project $10 million in funds that will be disbursed once construction is completed, allowing them to apply for bridging loans to get them there according to Block Club. TimeLine has also secured $2.5 million in state financing, and although no groundbreaking has been established, an opening date in 2024 is expected.