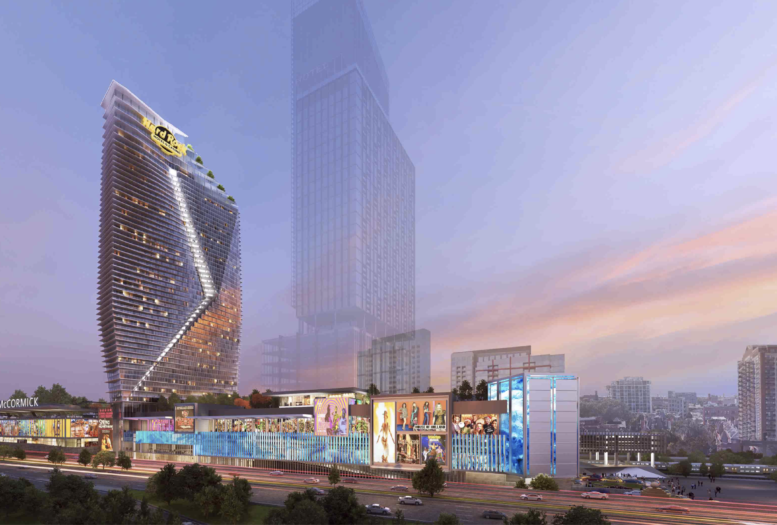 Updated renderings and details have been released for two of the five casino bids hoping to win as the city progresses to select a winner later this year. As plans continue to be flushed out leading up to the decisions, the bidders forge partnerships in hopes of impressing city council. YIMBY provided past updates on all plans in October and November of 2021 and this last February when McCormick Place expressed their concerns with plans using their site. Read more about the three-finalist.

Update: During the day of publishing this article, news broke via Crain’s that Mayor Lori Lightfoot has narrowed down the five-bids to the top three finalist, delaying the final decision originally expected anytime, and as early as this March down the road. Gone are the two major bids planning to utilize parts of McCormick Place itself including the Rivers Casino bid for the Lakeside Center and the Bally’s bid for the Marshalling Yards, although a report by the city didn’t call out the issues brought forward by McCormick Place as reasoning. Further new details will be called out with a bolded ‘update‘ prior. 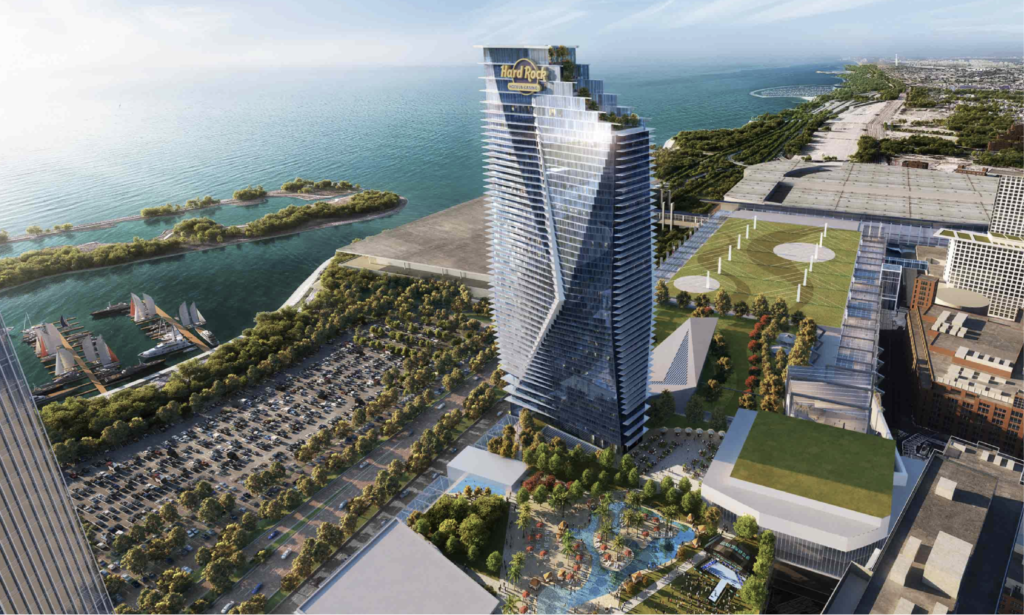 Perhaps the biggest update recently is that of Hard Rock’s bid. Last month we reported that a website had been created and then taken down for the proposal, and now the website is back up with further details. The $1.7 billion project would partner with the One Central mega-development in its plan to cap the existing rail lines with housing, office, and entertainment, while utilizing McCormick Place as a temporary facility. The updated website can be reached here. 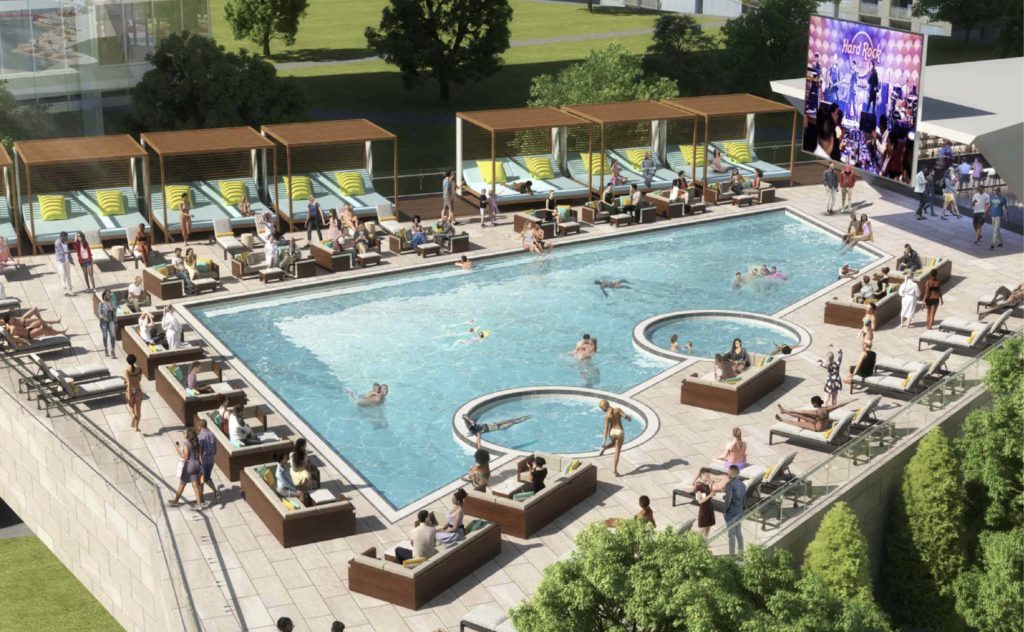 The property would feature 500 rooms, a massive gaming floor with ‘Asian Gaming’, 14 food destinations including a new Hard Rock Cafe location and food hall, an outdoor pool, and a 12,000-square-foot nightclub. It has also been revealed that the 3,500-seat Hard Rock Live venue would be in partnership with Live Nation, which operates Chicago staples like the Aragon Ballroom and House of Blues. This comes right after rival AEG who operates nearby Wintrust Arena and Soldier Field announced their partnership with the Congress theater redevelopment. 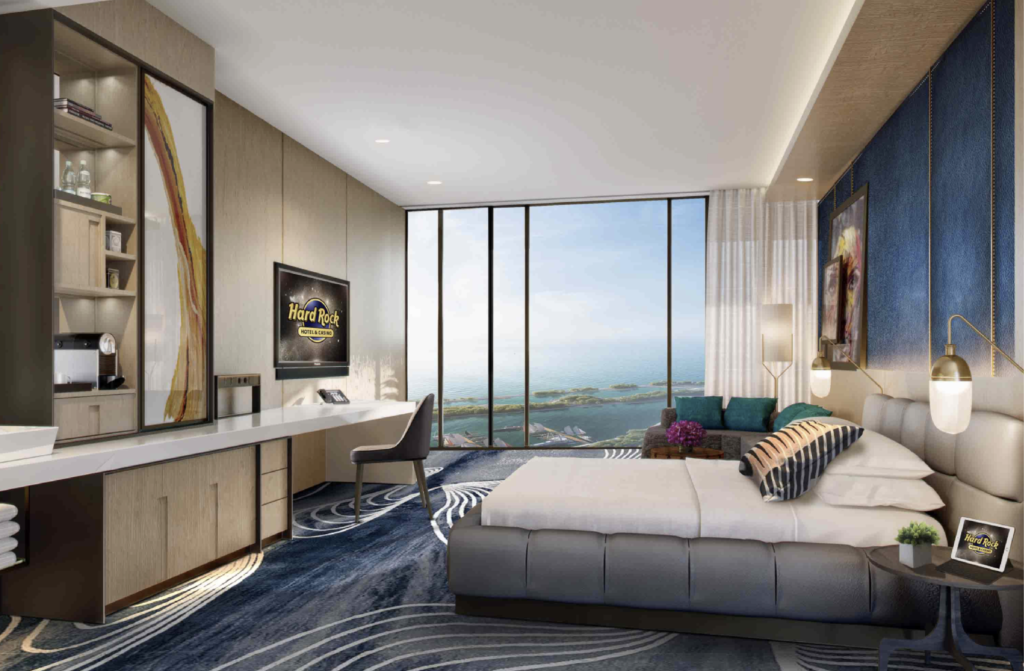 Another detail revealed is their new economic opportunity program dubbed SouthSideWORKS, a partnership with the Chicago Urban League whose goal is to achieve equity for Black families and communities. Funds will be used in three ways; community development, community training & education, and community investment, which will be a 20-year commitment to a dedicated revenue stream from One Central and its lenders to close the wealth gap through affordable housing and community development projects.

Update: Originally planning to utilize the lakeside center as its temporary facility, the city has disclosed that they are looking at multiple other options for the Hard Rock to use, including other convention buildings at McCormick place, the Medinah Temple (Previously Bloomingdales home store) in River North, and the Sheraton Grand Hotel in Streeterville. If chose, this joint-venture proposal will bring in roughly $185 million in tax revenue after six years, sitting in the middle of the three finalist. 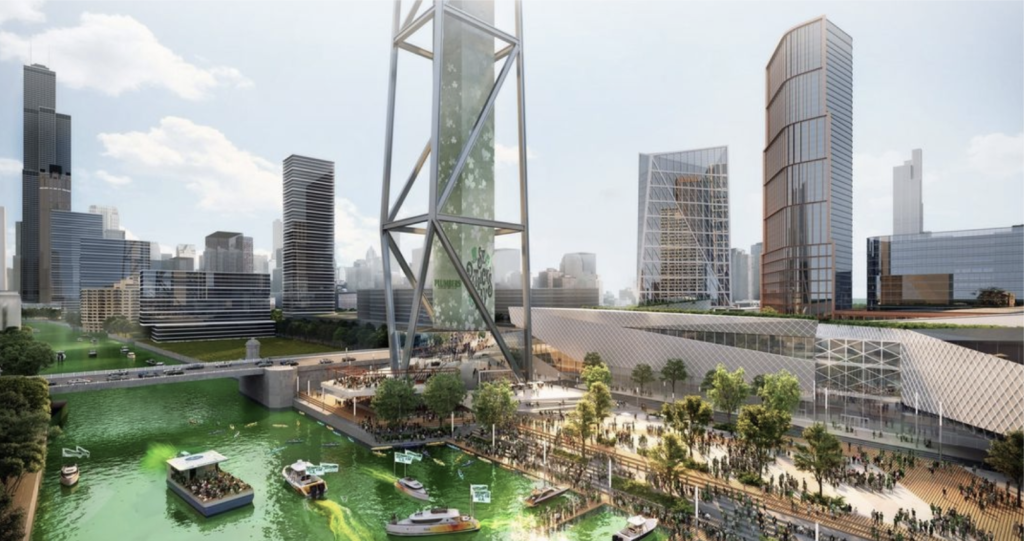 With St. Patrick’s Day just having passed, The 78 developer Related Midwest revealed new festive renderings for the casino proposal showing a green-dyed river and festive banners across the base of its planned observation tower. An Instagram post for the project shows a celebratory bagpipe band around the rendering for the project with the caption, ‘We can’t wait to see you at the groundbreaking!’ It is unknown if this is for the casino or other aspects of the mega-development. The Chicago Tribune also recently published an editorial in support of the bid.

Update: The River 78 bid will be the smallest in terms of gambling offering 2,800 gambling positions and projected to bring in the least tax revenue after six-years at $174.2 million. The height for its observation tower was also confirmed at 1,078-feet tall, aligning with the 78 name of the mega-development. 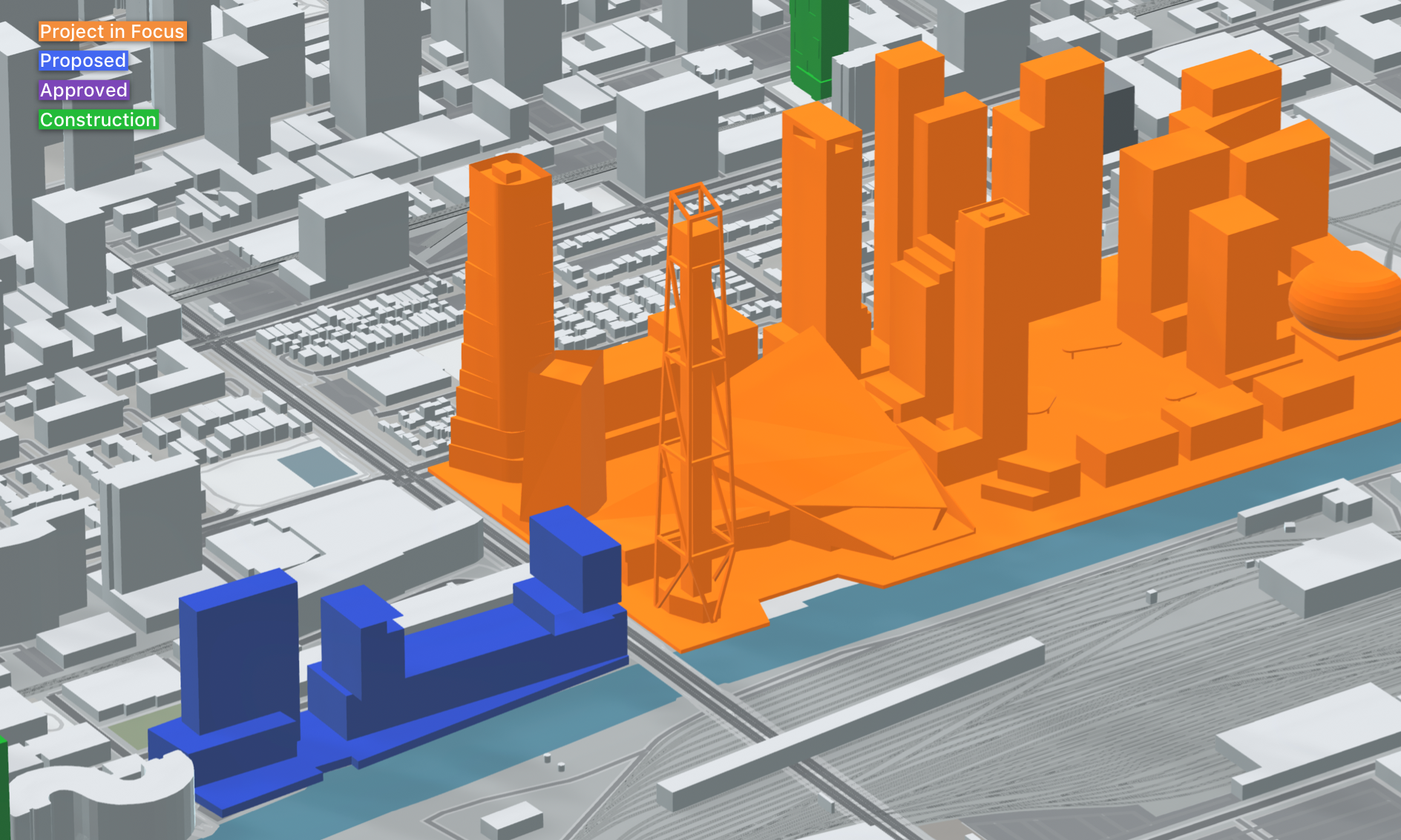 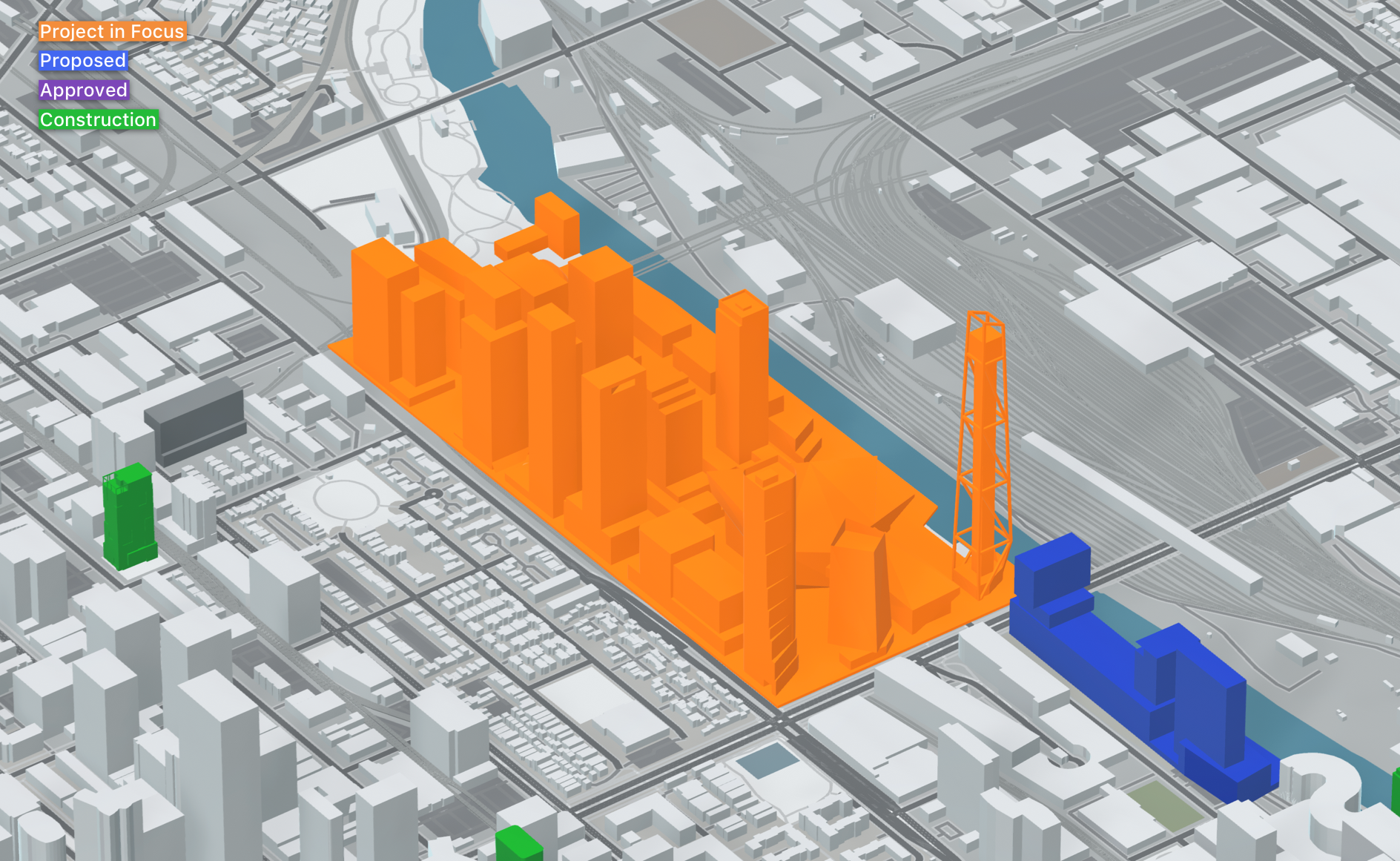 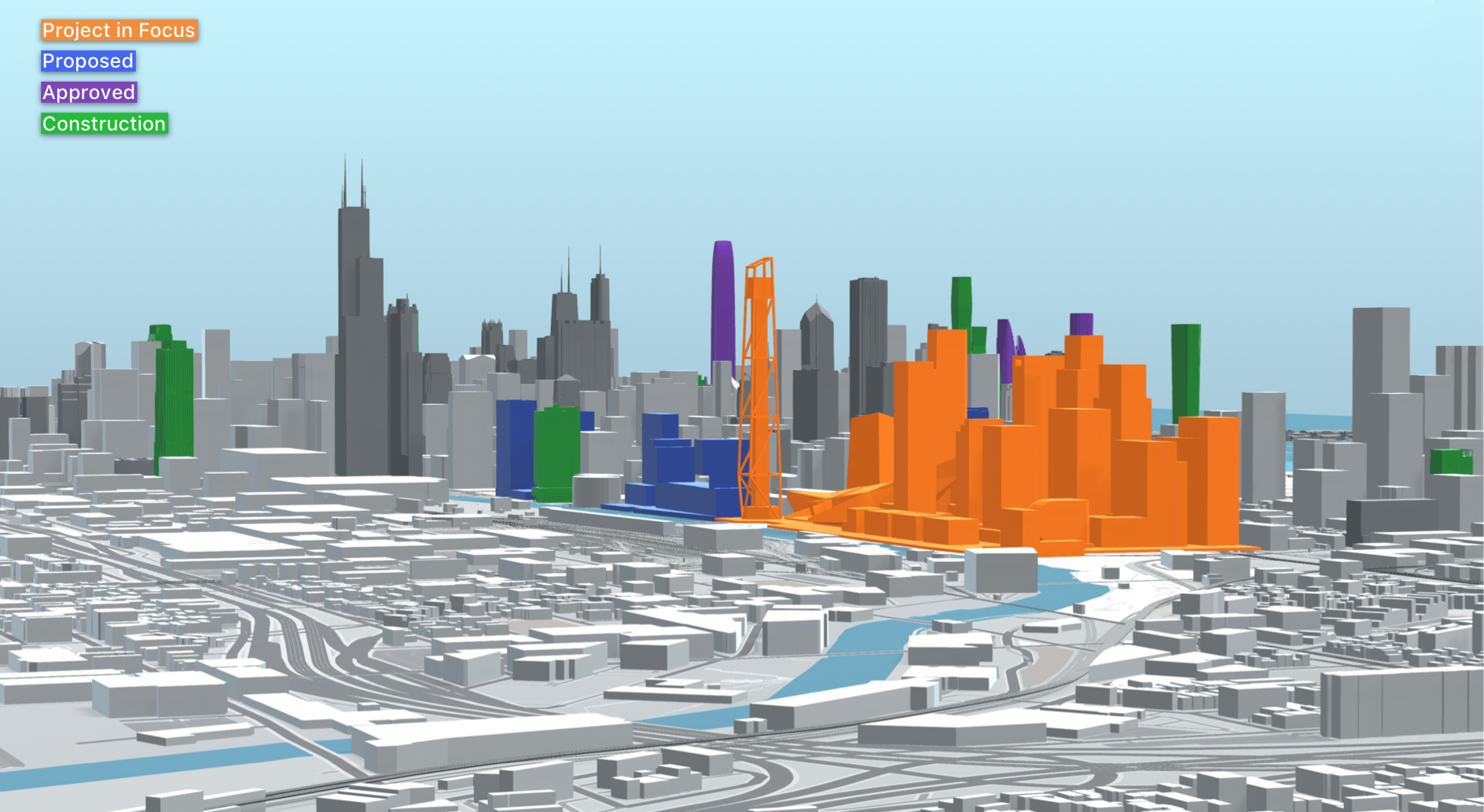 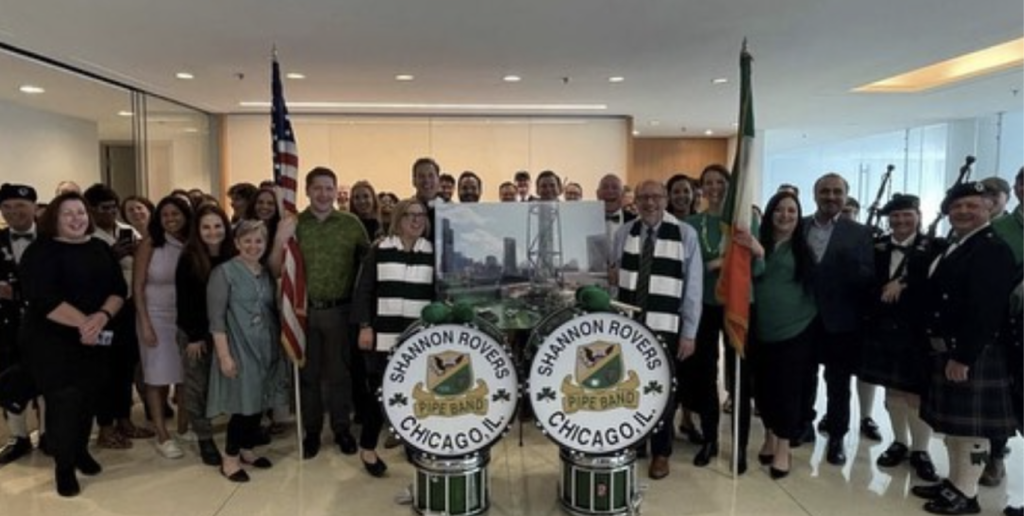 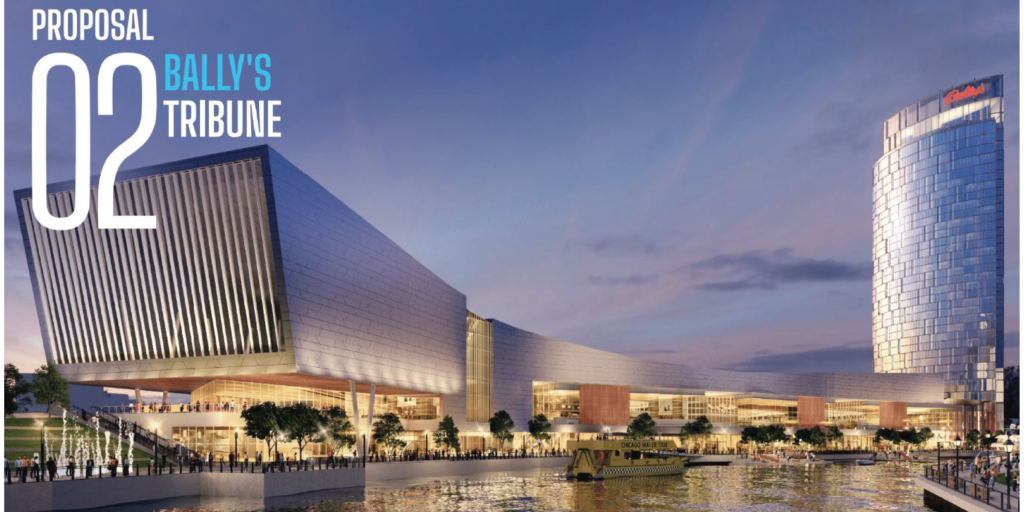 What would be the largest of the three finalist in terms of gambling with 3,600 positions, the Bally’s bid would also contribute a one-time $15 million payment to the city upfront and is expected to bring in the most tax revenue after six years at a predicted $192 million. The report also mentioned Bally’s could have an increased desire to maximize their Chicago investment being the only one of the three to not operate a Chicagoland property at the moment, with Rivers having multiple and Hard Rock aiming to have two very soon. 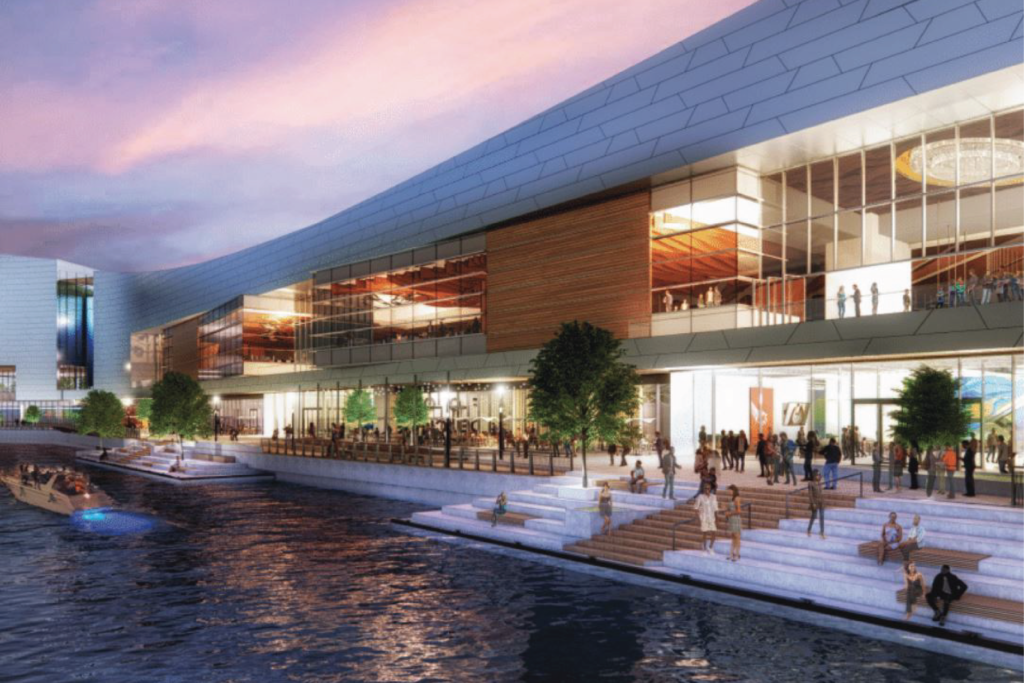 However traffic worries loom with this bid, the city is currently planning to widen the Chicago Avenue bridge, but Bally’s would pay to extend Superior, Erie, and Jefferson Streets. It is worth noting in the original Bally’s plan, the developer will only build part of its hotel component with 100 room at first, waiting to see how the market reacts to fully finish out the proposed complex that will include riverfront access, sports museum, conference hall, and a live music venue nearby the future Salt Shed and unnamed Lincoln Yard venue. 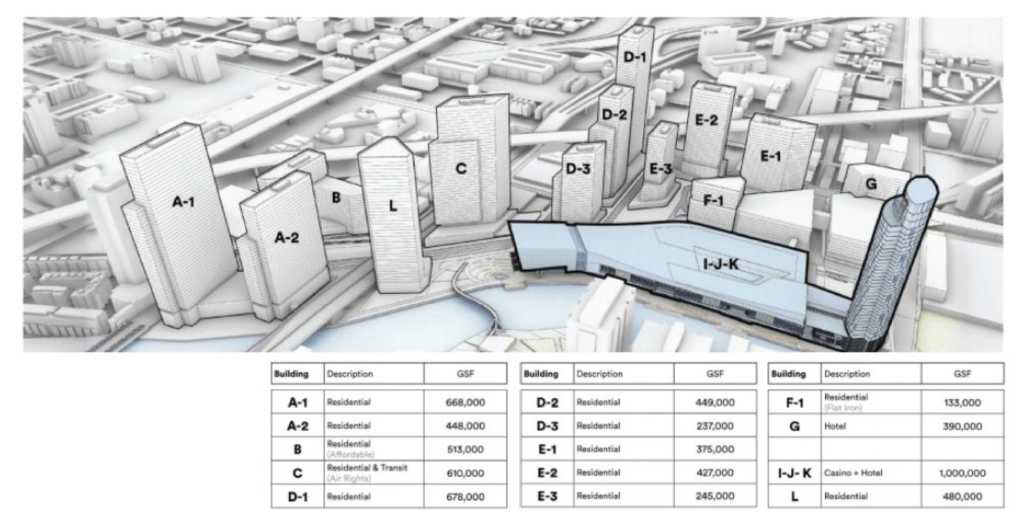 The project has also taken on a new design with a rounded main tower, and is set to kick-off the new river-district development consisting of 13-mostly residential towers along the riverfront as well as a new pedestrian bridge over the river connecting the new complex to the rest of the city. The largest tower in the future complex will be roughly 678,000 square-feet, not too far off from the casino’s 1 million square-feet of space.

Update: The final decision has been pushed as the city admits that it is behind schedule, on April 5th they will run the first of potentially many community outreach meetings on the three-finalist, with a final decision being made potentially as early as Summer 2022 but could be longer.