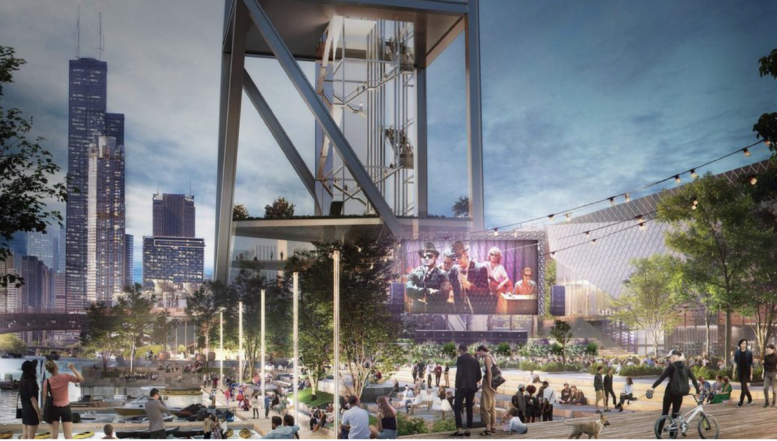 Rendering of riverwalk component of The 78 casino via Related Midwest

As the city progresses towards selecting a winner of the highly-scrutinized casino deal, more renderings and information have been revealed on the complexities of utilizing some of the city’s existing structures. The five bids submitted to the city last year span from near Goose Island to McCormick Place, come from three companies with hopes to create a gambling, dining, entertainment, and lodging destination that is unique to Chicago’s urban fabric. More in-depth initial information on all of the bids can be found in YIMBY’s previous updates from October and November of 2021. 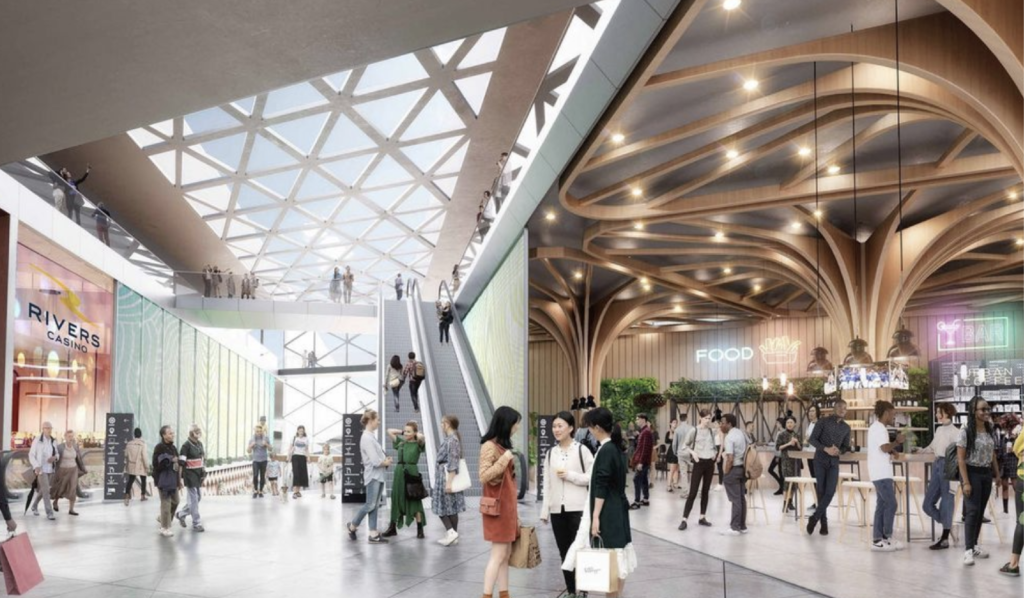 Rendering of the casino interior via Related Midwest

The bid which seems to be the crowd favorite among many due to its bold vision and super-tall status observation tower is that of The 78 from Related Midwest and Rivers Casino. The JGMA-designed structure will bring a massive casino, a 300-room Equinox branded hotel tower, and a 7,500-square-foot multi-level sportsbook. A few new renderings have been revealed showing more of the structural lattice work within the interiors of the complex, it is worth noting this bid has shown the most from the inside of the space. 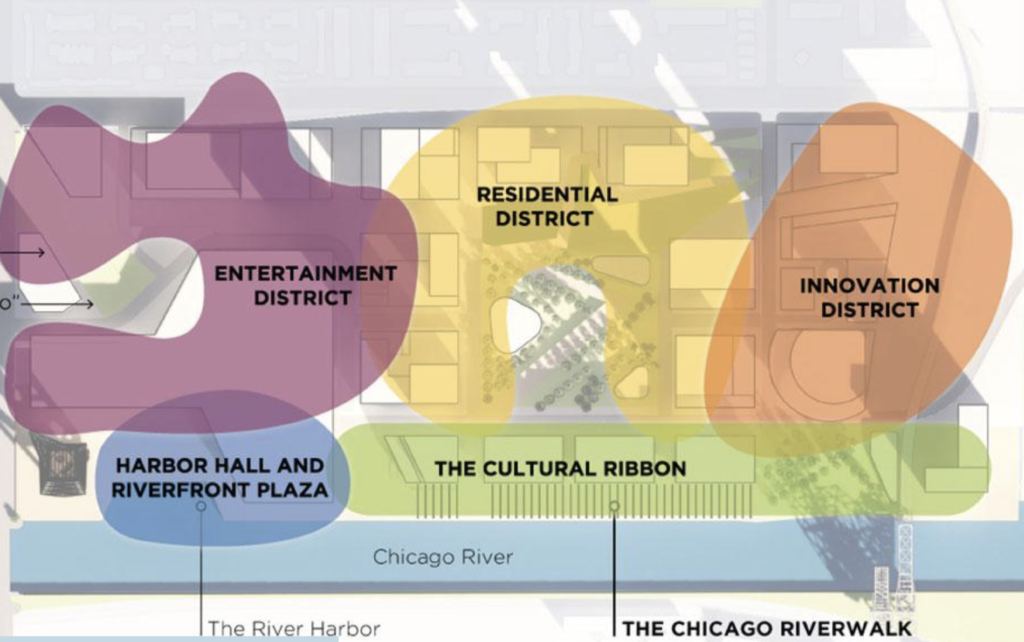 Updated map of The 78 via Related Midwest

Rendering of the casino sportsbook via Related Midwest

A new site-plan map was also posted on the 78’s website showing the updated layout of the complex with the casino and new entertainment district emphasized. While the rest of the development shows a small re-arrangement with a central park replacing the once proposed crescent park. More food partnerships have also been listed including with Lettuce Entertain You, Boka Restaurant Group, Ken Kee, and Gibsons who recently announced a new Fulton Market location. Additional information can be found on the bids website. 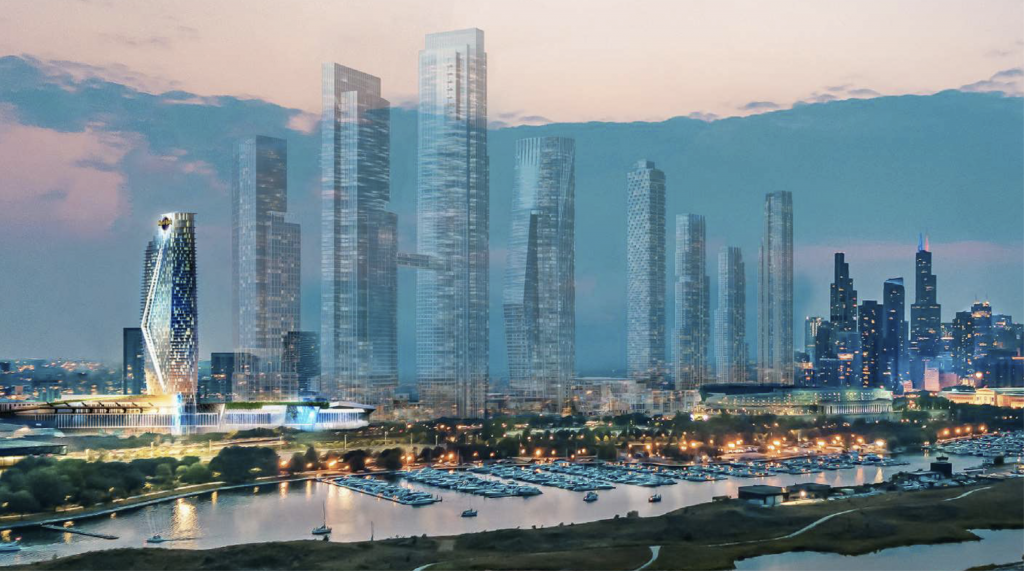 The next set of details comes from the Hard Rock proposal with a $1.7 billion bid partnered with mega-development ONE Central, who plans to cap the adjacent rail tracks. Earlier this month a website was created for the proposal offering a further look into the project including a claim that the private capital needed for it was already secured. A few days later the website was taken down and now leads to an error page, the site which still shows a rendering can be found here. 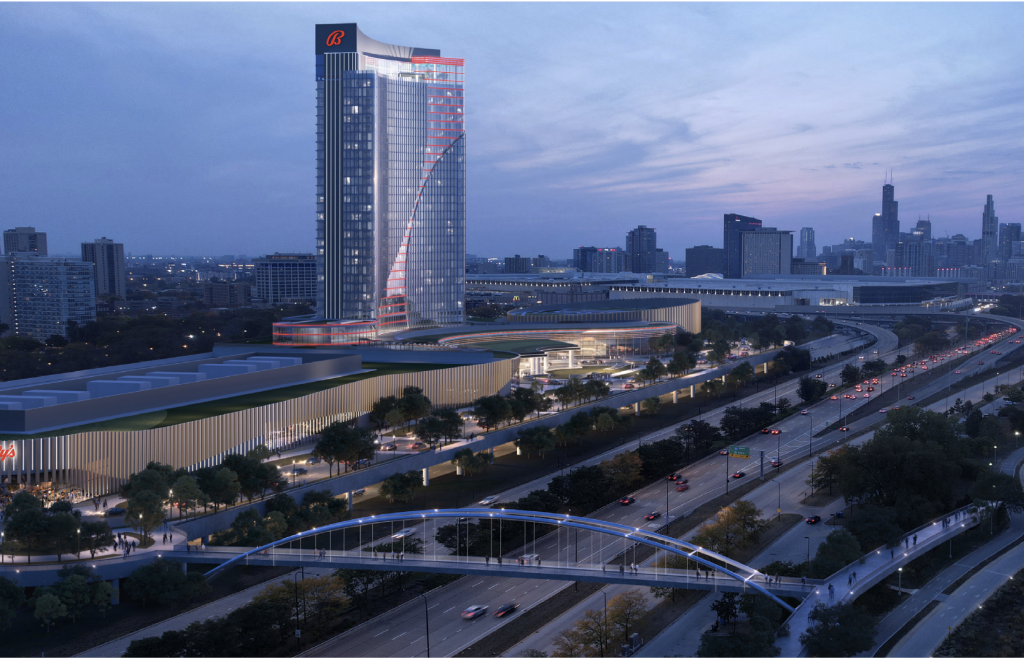 Furthermore, for all bids that planned to use McCormick Place and the Lakeside Center received a hiccup from the McCormick Place CEO Larita Clark who expressed in a Sun Times article that the use of the convention center’s sites would be far more costly and extensive than the developers predicted. Three of the five bids including the aforementioned Hard Rock, and one from both Bally’s and Rivers would be impacted by such. 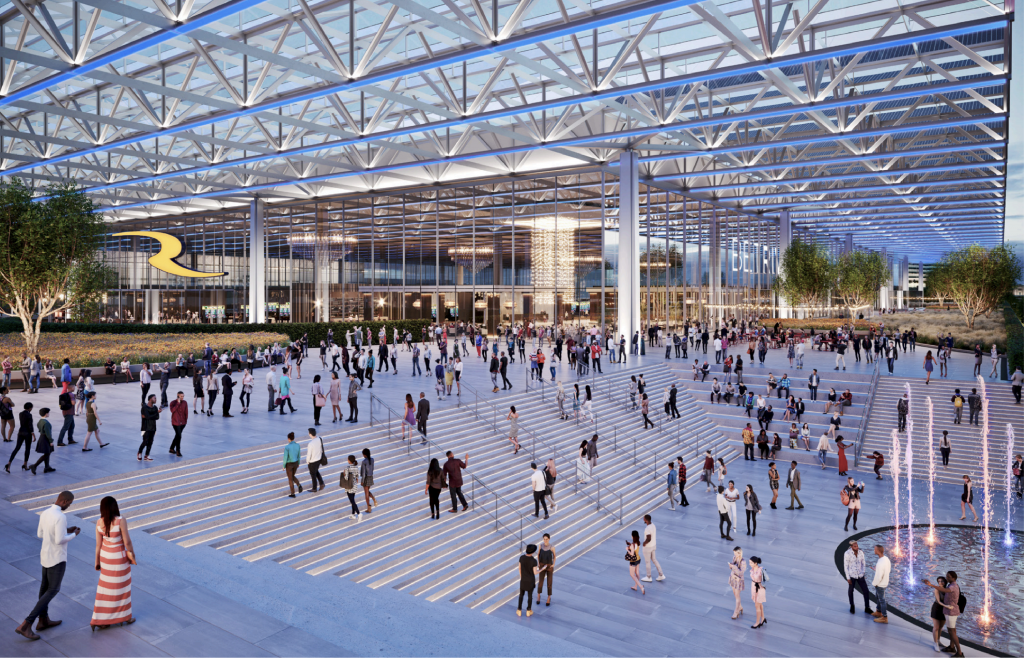 Clark expressed that the Lakeside Center is commonly used for events and houses critical mechanical equipment for the whole campus, it would require the replacement of its 600,000 square feet of space and infrastructure which is predicted to cost roughly $1 billion and take six years to complete. The marshaling yards included in Bally’s bid is also crucial to the 35,000 trucks that utilized it to operate the convention complex at near capacity in 2019, among many other issues outlined. However Clark mentioned it is not impossible.

Although originally predicted that a decision could be made as early as next month, it is unknown when the city will be making its final decision. Construction of the winning bid’s temporary facility is expected to begin soon after the announcement.

9 Comments on "Updates On City Casino Bids As Selection Looms"