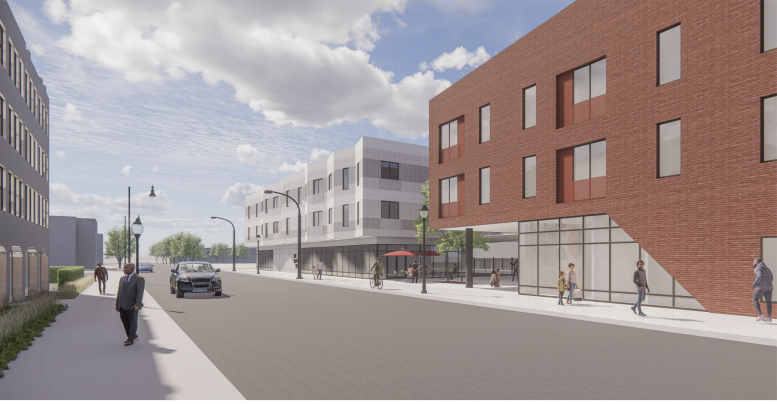 Revised plans have been revealed for the Auburn Gresham Invest South/West proposal to the Committee on Design. Split into two sites at 757 W 79th Street and 838 W 79th Street, developers Evergreen Real Estate and Imagine Group have teamed up with Ross Barney Architects and Nia Architects to revise the previously single site project to its new iteration. The project is one of the winners announced this spring from a 2020 RFP of the growing Invest South/West initiative and will offer affordable residential units to the neighborhood. 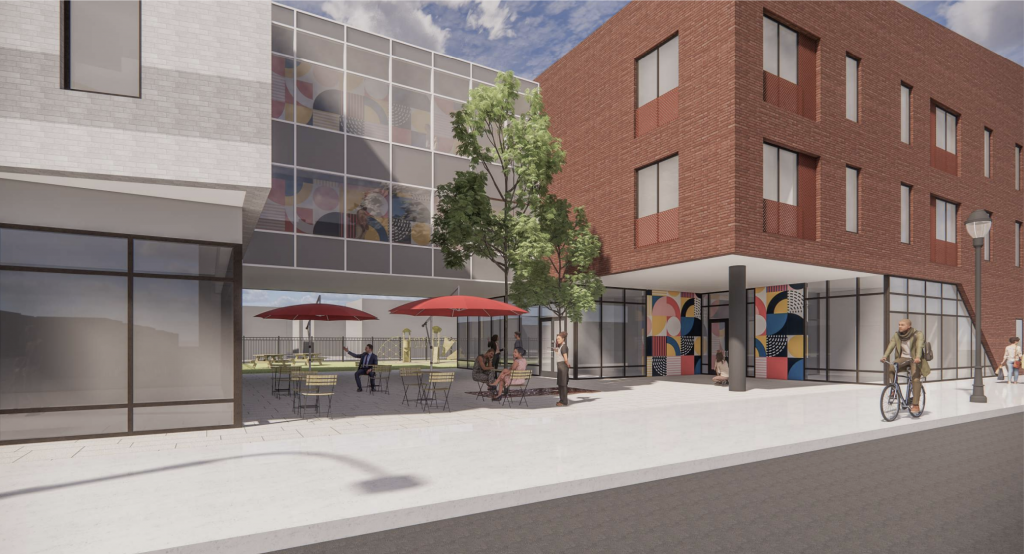 The massing of the structure will be split via a skybridge occurring on the top two floors which will hold storage space and communal laundry facilities. On the first floor the bridge will hover over a small public plaza that will serve the two adjacent commercial spaces, 6,276 square feet in total, residential lobby, and lead to a small playground with picnic tables and a basketball court in the back. There will also be a total of 26 vehicle parking spaces enclosed with a security fence located off of the back alley, of which 11 will be covered under the structure above. The building will be clad in two colors of masonry veneer with casement windows and Juliet balconies. 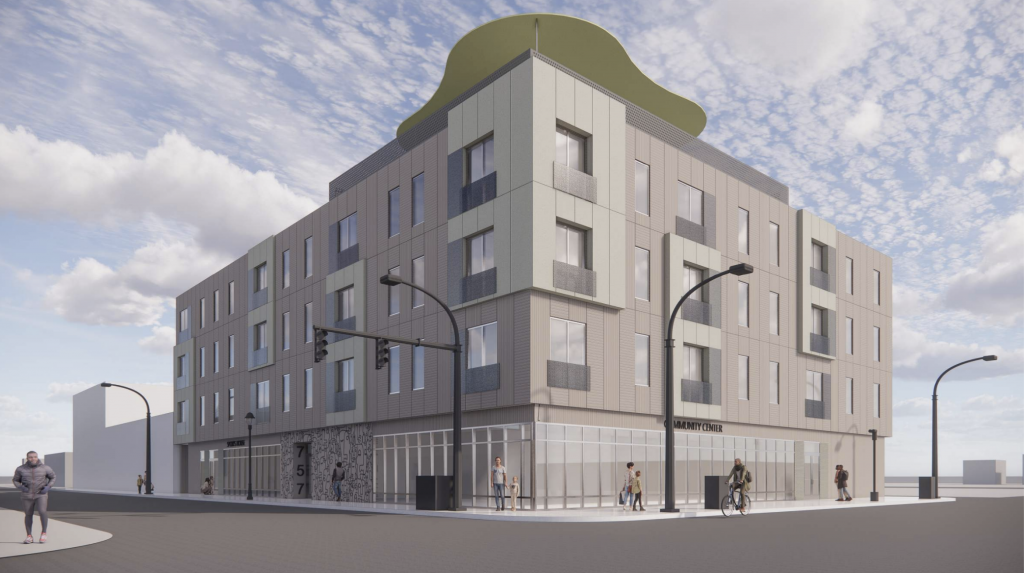 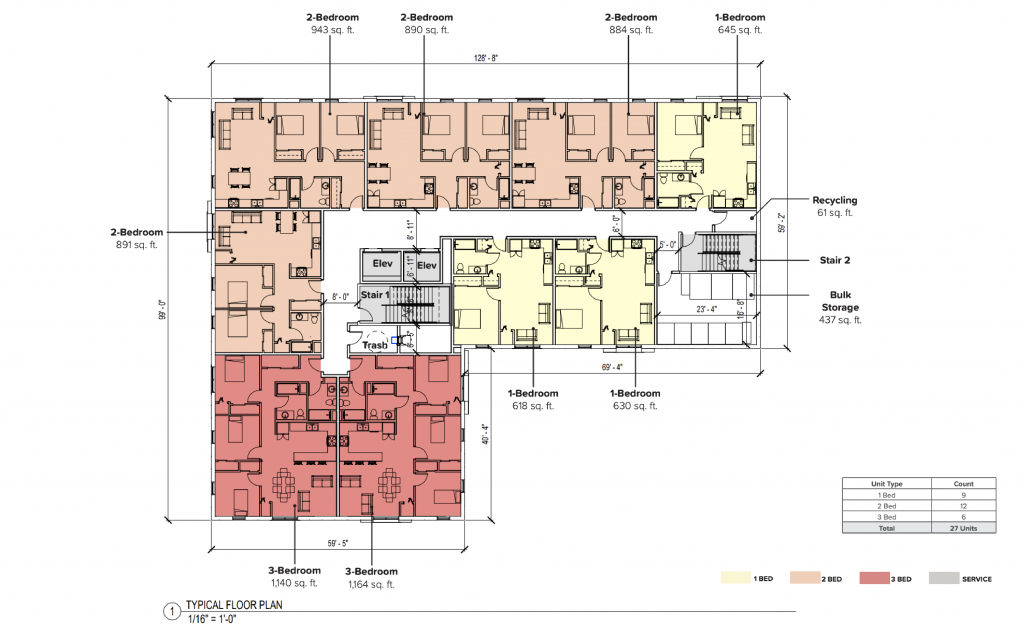 The L-shaped building will hug the corner with a limited setback and feature a 3,800-square-foot and 1,600-square-foot retail space split by the entrance to the residential lobby. Behind the building will be 14 vehicle parking spaces of which five will be covered under the building, but will not be fenced in. All residents will be able to use the laundry room on the top floor along with a 2,126-square-foot outdoor terrace covered by a large fabric canopy. The building will be clad in cement board panels and also feature casement windows and Juliet balconies. 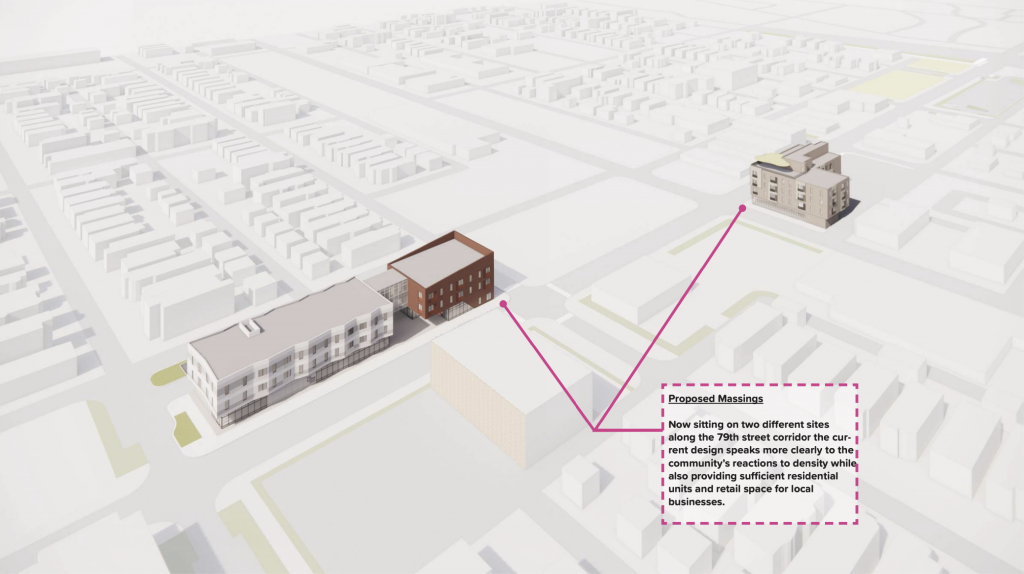 Future residents will have bus access to CTA Routes 8, 79, and 169 via a one-minute walk and the Metra Gresham stop via a 20-minute walk. The Committee on Design had various comments but the project will now move onto further permitting and seek Plan Commission and City Council approval, developers hope to break ground by mid 2022 at the latest.