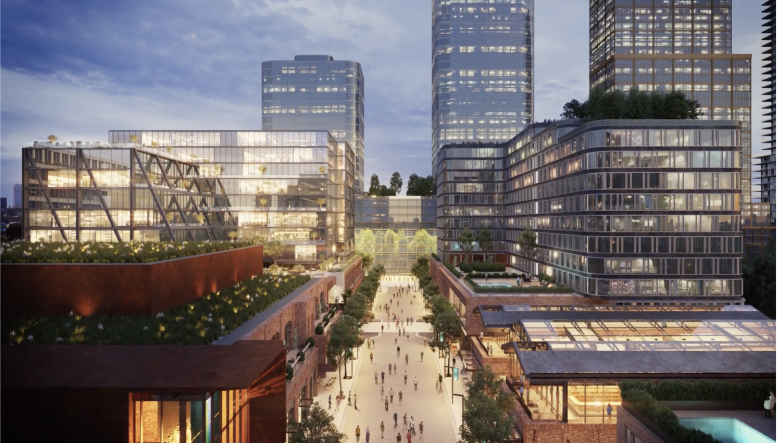 Initial renderings have been revealed for the next phase of the Lincoln Yards mega-development near Goose Island. Developer Sterling Bay has revealed some of the first details for its next building and district for the area just north of ALLY at 1229 W Concord Place, a life-sciences building which just broke ground marking the beginning of vertical construction of the project. Design firm Skidmore, Owings & Merrill is behind the master planning of the Steelyard district with Gensler as the designer for the buildings, including the new mid-rise at 1685 N Throop Street. 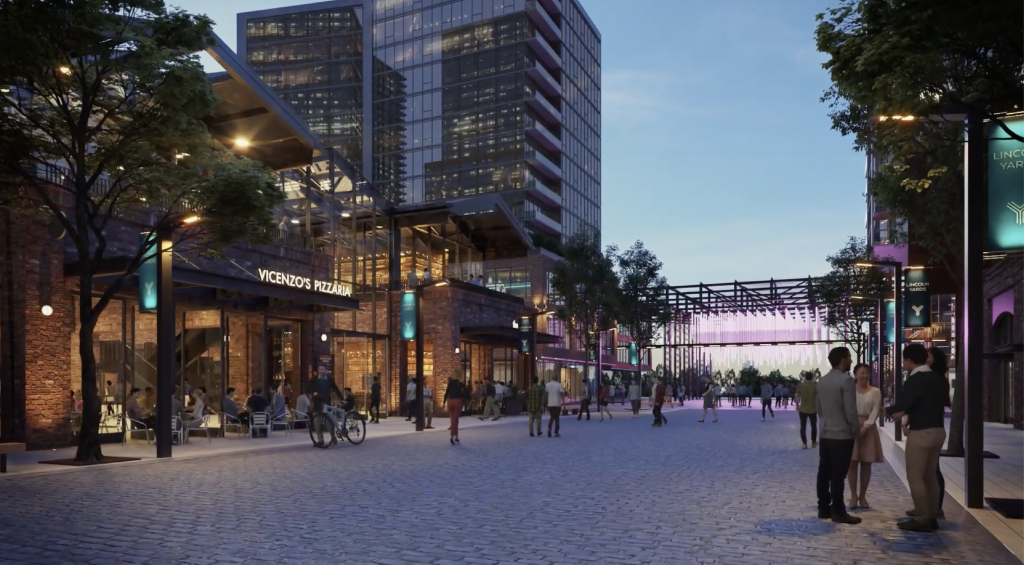 Rendering of the Steelyards by Sterling Bay

The Steelyards will be a mixed-use shopping and entertainment district located on the southern portion of the project north of W Concord Place, which will be extended with a new bridge over the river connecting east. The area which Sterling Bay states is where, “Chicago connects…to meet, play, celebrate, and innovate” will potentially contain 775,000 square feet of mixed-use space, 321,000 square feet of retail, and 800 residential units based on initial plans for the zone. 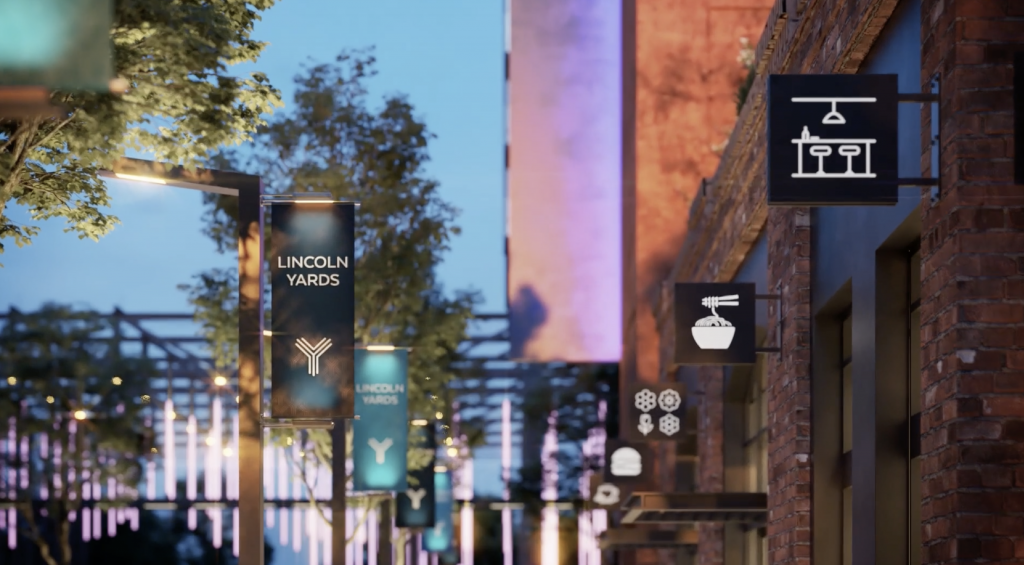 Rendering of the Steelyards by Sterling Bay

Sitting just south of the new main park for the development, visitors will be able to walk through to the river in a ‘pedestrian-oriented place’ lined with multi-use spaces along an internal network of smaller scaled laneways creating an active urban zone. Bookending the laneways will be the Chicago River to the east where a future water taxi stop and enhanced riverwalk will be accessible. Buildings for the area range in height but most top out around 130 feet tall, those who drive will have easy access to most of the project’s planned shared parking structures just west of the site near the expressway to ease traffic. 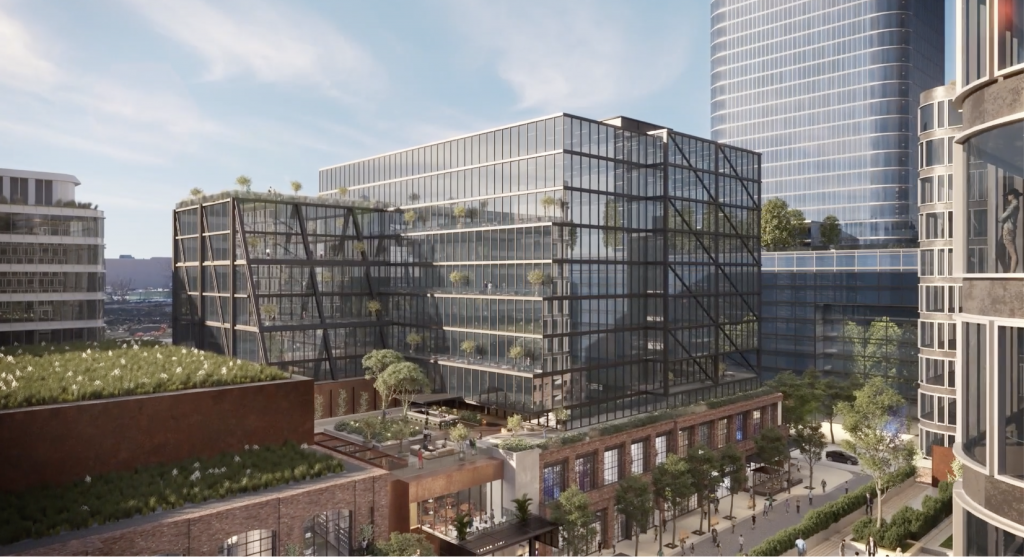 The first building of the new Steelyard will be a mixed-use mid rise located towards the west of the district connected to the existing road. The 11-story, 365,000 square feet structure will bring the only available office space within the Steelyard, offering 28,000 to 35,000 square feet floor plates following the rising trend of smaller floors post-Covid. Originally master-planned to be 130 feet tall, all levels will feature tall ceiling heights and large curtain wall windows with views towards the skyline and river.

Employees at the building will have access to various terraces, including a large open space on the third floor with an outdoor bar and lounging areas. Other amenity decks created as the building sets back will give some tenants private outdoor spaces with the potential for large operable window walls. Overall the structure will bring 24,400 square feet of amenity spaces as well as retail spaces that can be subdivided as small as 2,000 square feet and up to 25,000 square feet. Renderings for the building also show the entrance to a live-entertainment space which may be part of a future adjoining two-story structure. 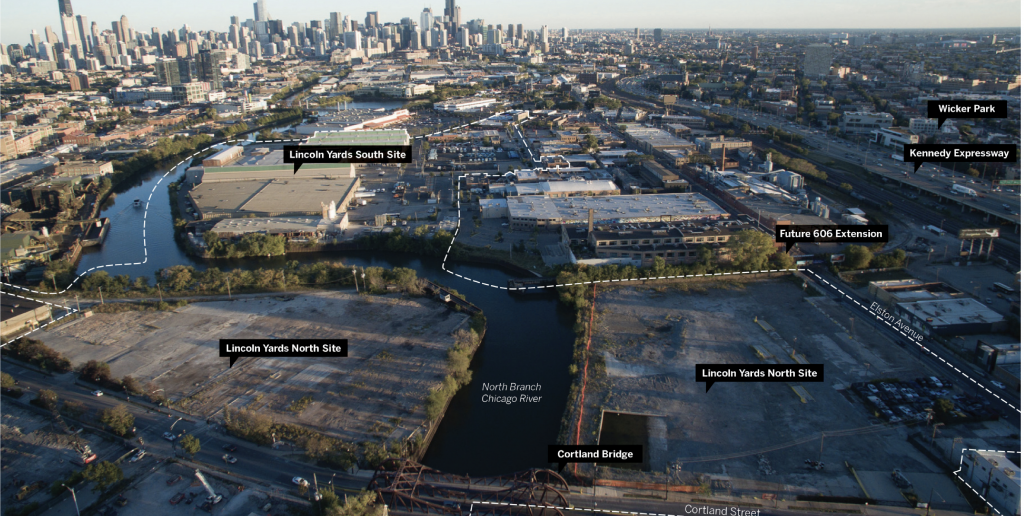 While no formal information has been released on any ground breaking or expected construction timelines, the updated information shows that Sterling Bay is proceeding with a different construction phasing plan than originally proposed. As we saw with ALLY at 1229 W Concord Place being the first to start construction, we can now see that construction of Lincoln Yards will at the moment proceed with the southern portions first rather than the originally scheduled northern sites near the C.H. Robinson building. More information on Lincoln Yards including further images and a promo video for this next phase can be found here.