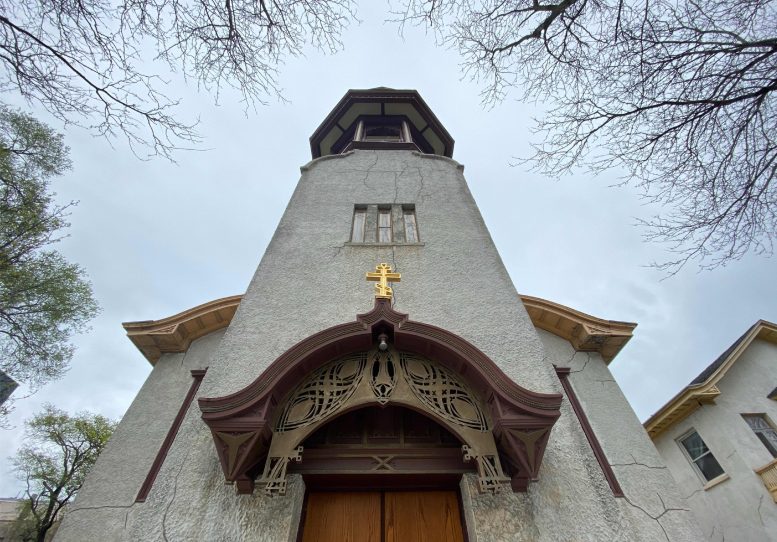 Holy Trinity Orthodox Cathedral Prior To Restoration by Ian Achong

Restoration work nears completion of the Holy Trinity Orthodox Cathedral located at 1121 N Leavitt Street in Ukrainian Village. The Louis Sullivan-designed historic cathedral was built in 1903 and is one of two houses of worship he did in his time of practice. The roughly $600,000 renovation will keep the cathedral and rectory going for the next 100 years and is being led by the parish with the Commission on Chicago Landmarks. 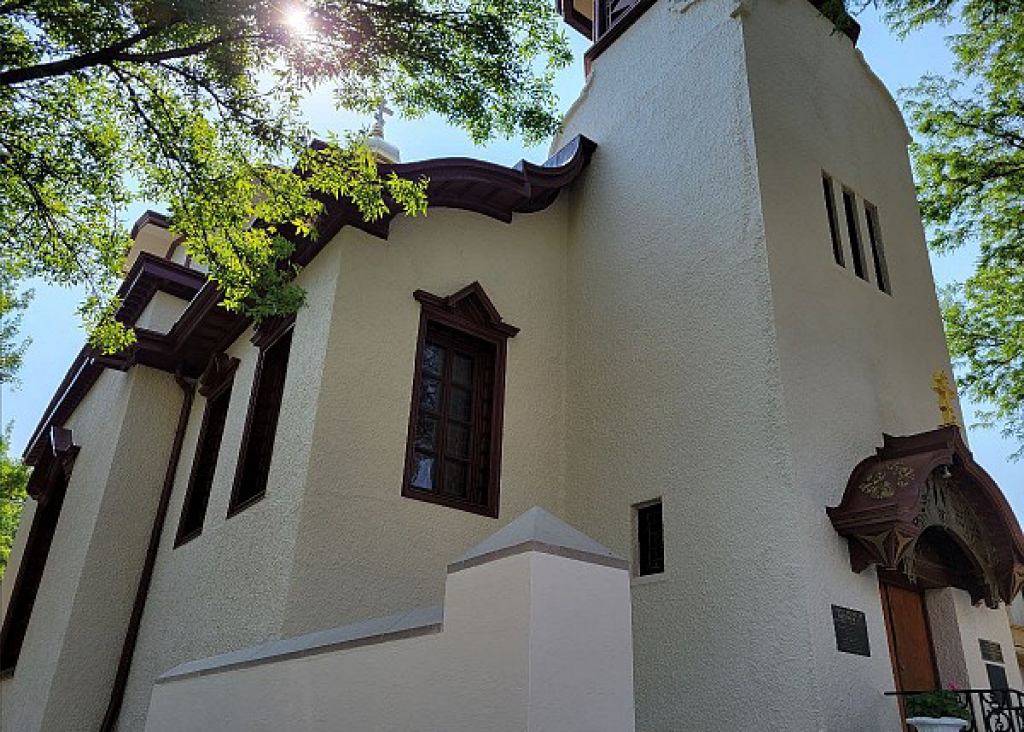 Inspired by a small wooden church in the Siberian village of Tatarskaya, the design takes many direct design queues from the old world architecture many of the founding parishioners were accustomed to. An octagonal ‘dome’ centers the main worship space and is adorned with a small gold onion dome and cross, the stucco-clad building comes to a peak with its centralized frontal bell tower filled with intricate Sullivan detailing and a taller gold dome and cross. Although the building follows traditional Siberian and Orthodox design notions, elements such as the small entry cover include the complex formwork Sullivan was known for and seen in other Chicago icons like the Carson Pirie Scott building on State Street. 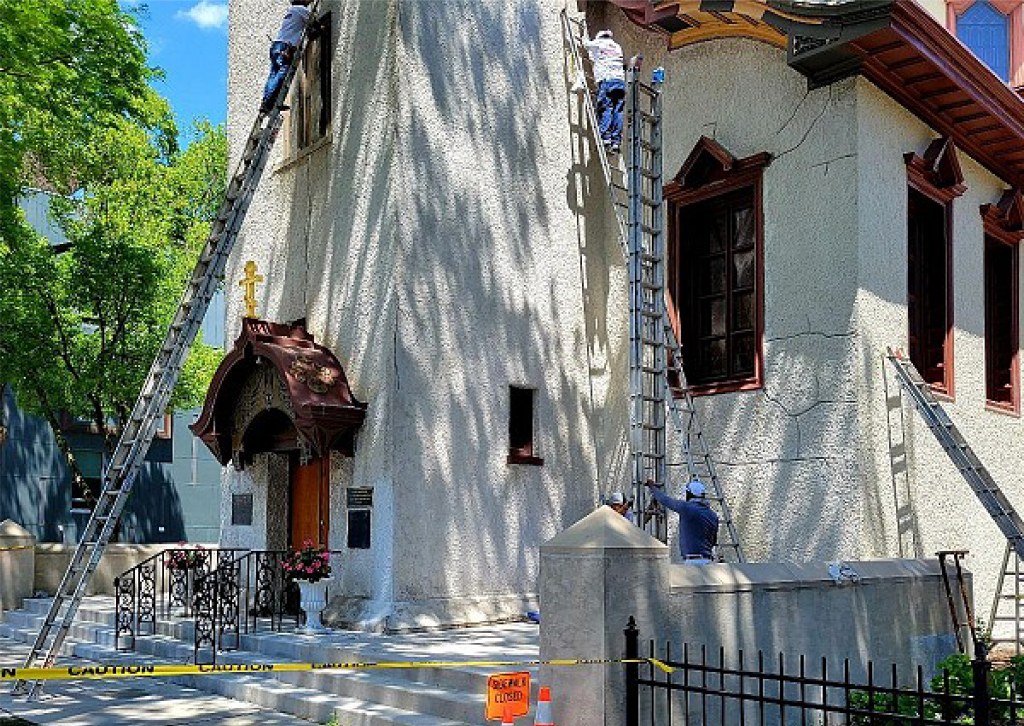 The major restoration focused on the exterior of the cathedral and rectory, beginning with a $188,000 repair of all of the existing metalwork. The metal work, which surrounds the majority of the roof and windows, is quintessential Sullivan but has unfortunately deeply rusted and gone missing, this effort restores and/or replaces it with replication ornamentation approved by the Landmarks Commission. Following the metal work is a $215,000 effort to repair and repaint all of the exterior stucco for both buildings, accompanying this is the replacement of various windows in the next door rectory. Smaller touches still remain to be finished including new stairs and rails for the front sanctuary door, and new storm doors for the rectory. 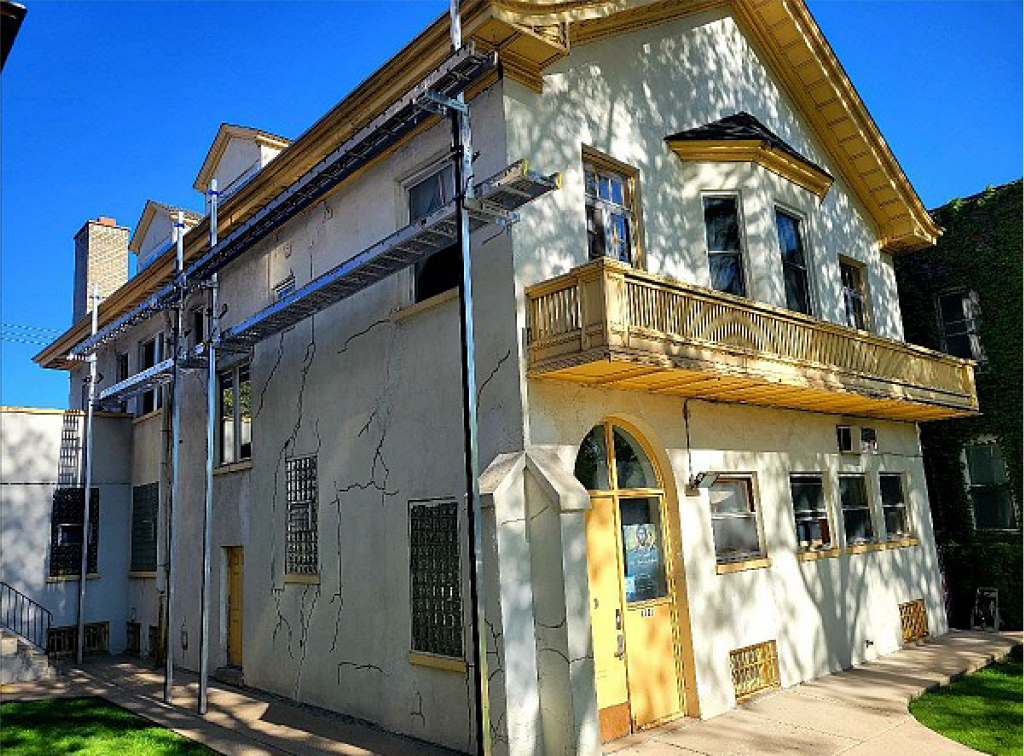 The cathedral is one of the last few serving the nearby Christian-Orthodox population nearby and is a Chicago architectural staple. In the 1970’s the building became both a Chicago Landmark and was listed on the National Register of Historic Places. Both achievements helped its modern day restoration as $250,000 of the work was funded by the city’s Adopt-A-Landmark grant. The rest of the expenses were covered by private donations, quite different from its original funding which partially came from Russian Tsar St. Nicholas II and Sullivan himself.