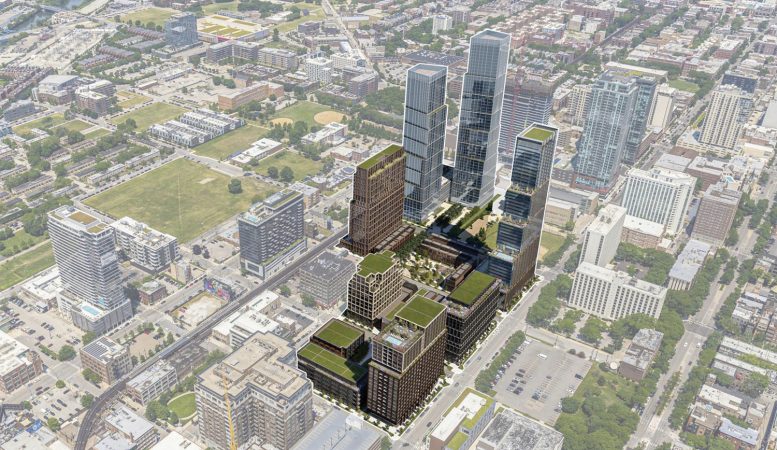 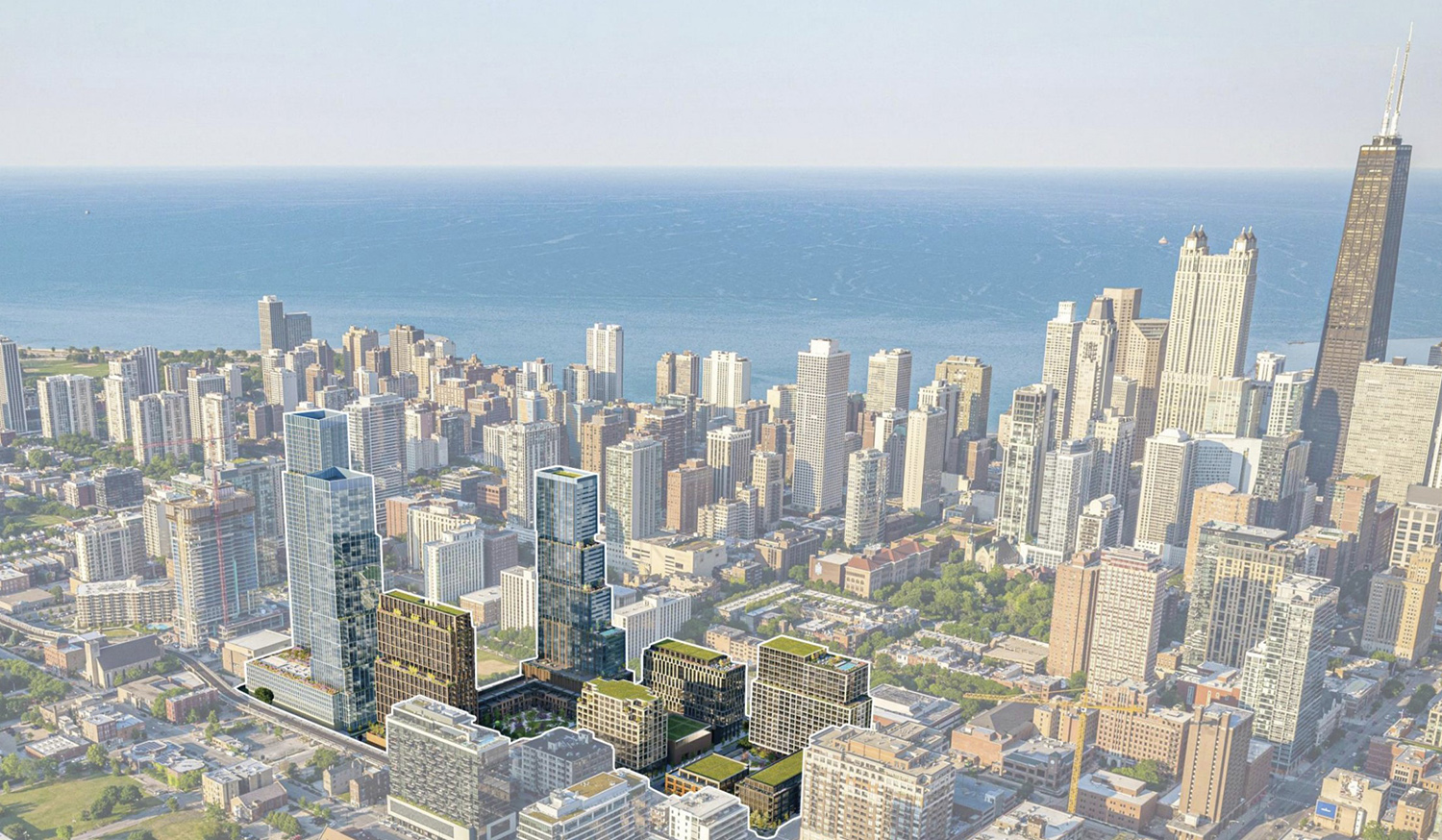 Proposed for a portion of the Moody Bible Institute campus on the Near North Side, JDL purchased the site from Moody Bible, which would continue to own and operate an educational institution and media ministry on its remaining 9.4 acres. 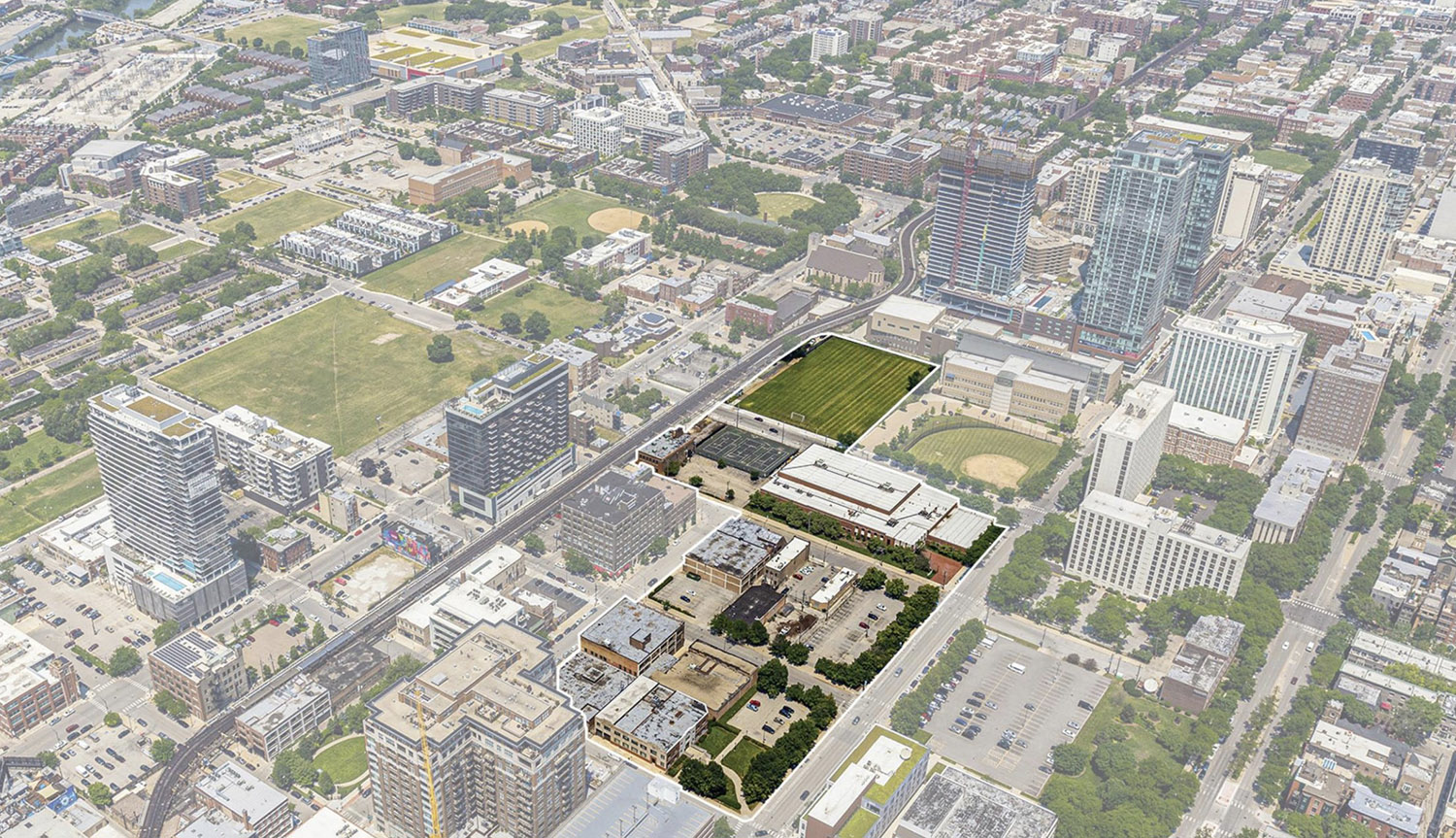 Dubbed North Union, the name comes from being at the edge of multiple neighborhoods, connecting Cabrini Green, Gold Coast, River North, Old Town, and Rush & Division. Poised as a transit-oriented development, the Chicago CTA L station, serviced by the Brown and Purple Lines, is within a six-minute walk of the future complex. The Clark/Division CTA L station, serviced by the Red Line can be reached within an eight-minute walk from the site. The 66, 70, and 156 CTA bus routes are also nearby. Bike lanes and a Divvy station are located along N Wells Street. 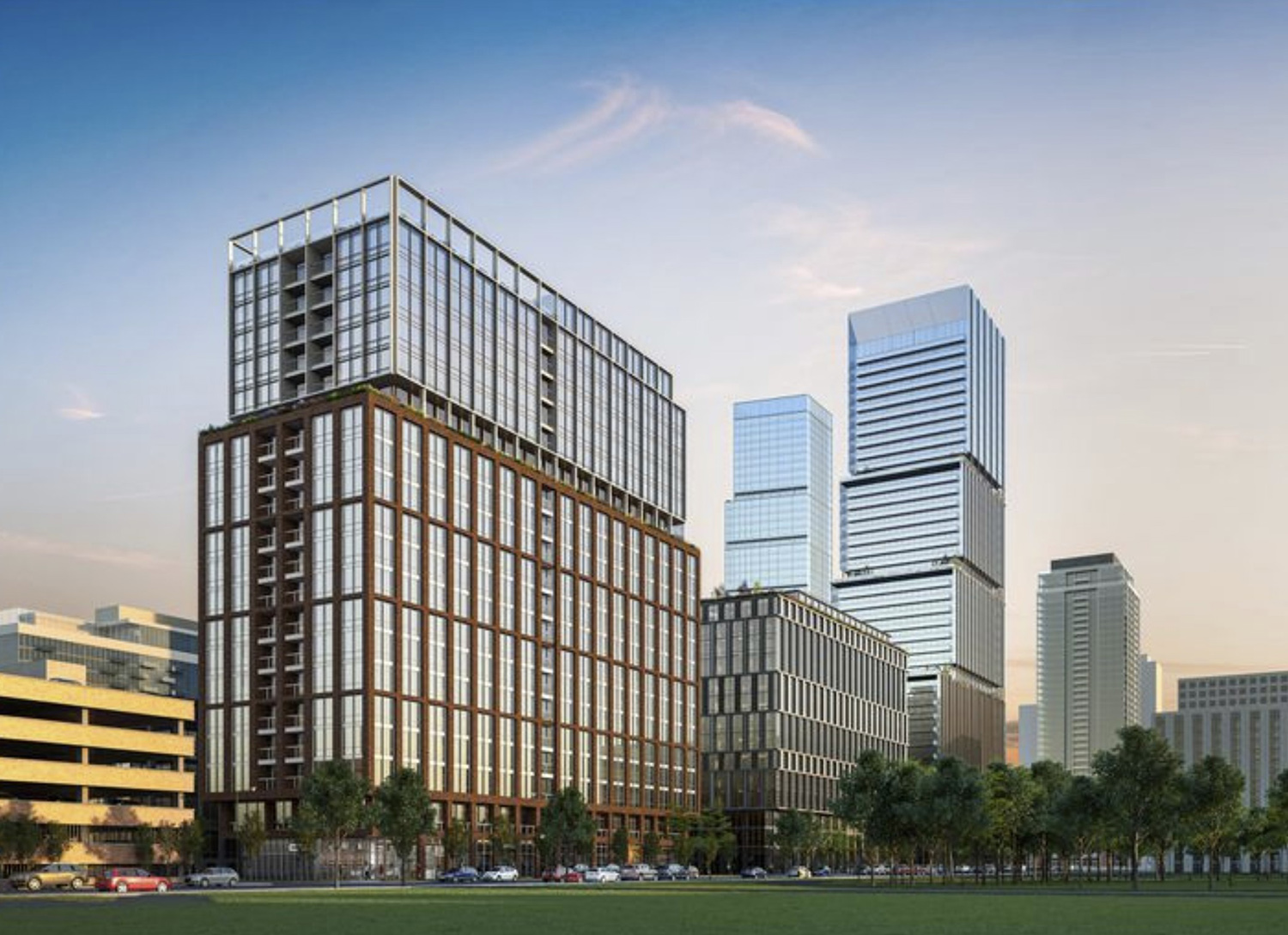 Construction is planned in five phases, with phase one of the development bound by N Wells Street, W Chestnut Street, N Franklin Street, and W Locust Street. The first tower will be 878 N Wells, which will rise 256 feet over 21 stories. The mixed-use structure will hold 389 dwelling units, with 36 of the residences affordable. 200 parking stalls will be located in the basement, topped by ground-floor retail. The second building will be 232 W Chestnut, rising 70 feet over five stories. Designed as a wood timber loft structure, it will hold 35 dwellings, with three units being affordable. Parking will be combined with 878 N Wells. At 871 N Franklin, an existing structure will be adaptively reused. Rising 50 feet, the four-story project will hold 23 units, with two affordable. 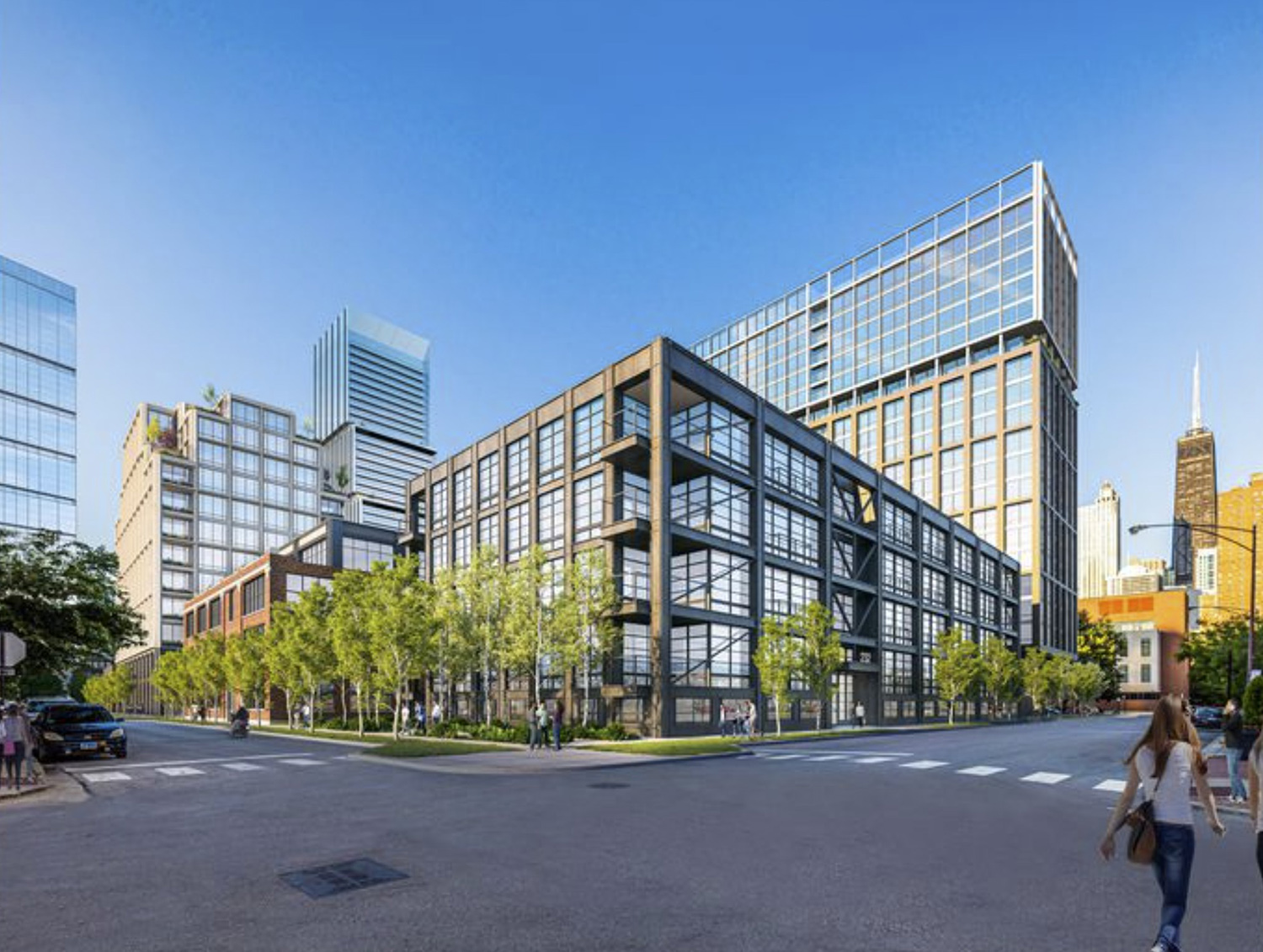 Phase 1 will be filled at street level with open public space. Encompassing 20,000 square feet, the park space will feature an arrival park, a connection between N Franklin Street and N Wells Street, a water and public art feature, and cafe seating along light commercial uses. The development will feature multiple infrastructure improvements to promote pedestrian walkability. This includes tabletop street paving, which are slightly raised areas, like a speed bump, for pedestrians to cross. Bulb-out curbs will be used at the intersections. 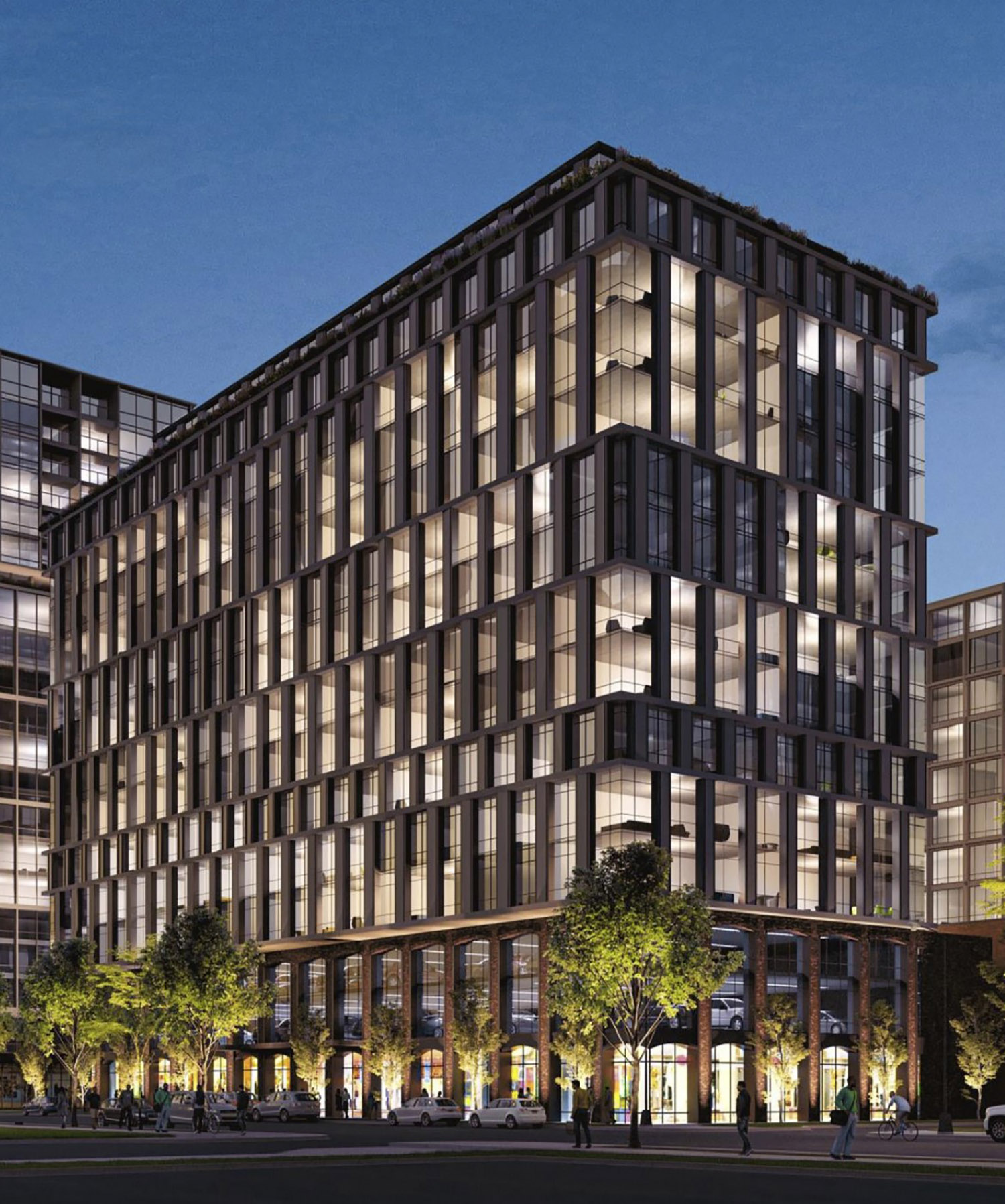 The second phase will be bound by N Wells Street, W Chestnut Street, N Franklin Street, and W Walton Street. 920 N Wells, the first structure for the second phase, will rise 155 feet over 15 stories. The mixed-use building will hold ground floor-retail with 186 dwelling units on the upper floors. 17 of the units will be affordable and 90 parking stalls will be included. The second structure will be at 216 W Locust Street, a two-story replacement athletic facility for Moody Bible Institute. 909 N Franklin will be a 12-story, 161-foot-tall residential edifice. There will be 100 dwelling units, including nine affordable, as well as parking for 100 cars. 919 N Franklin is an existing two-story, 34-foot-tall structure that will be adaptively reused into single family homes. 213-217 W Walton is a four-story project holding three single family homes, with space for six cars. The second phase will be linked by a mid-block connection and a green alleyway. 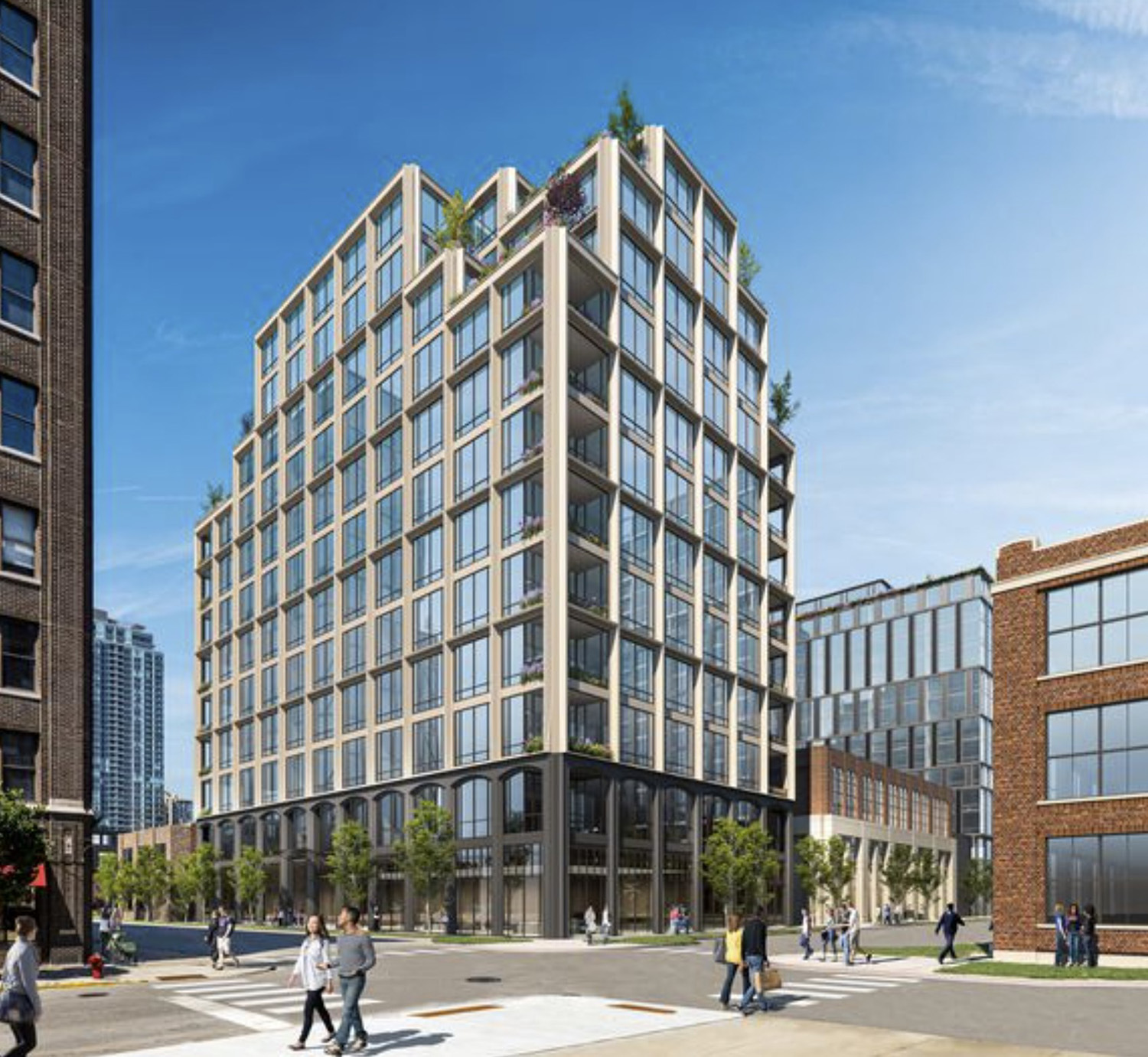 Phase 3 will be bound by N Wells Street, W Walton Street, and W Oak Street. 205 W Oak will be a 42-story, 509-foot-tall, mixed-use building. It will hold ground-floor retail, 340 dwelling units, with 30 of the units affordable, and 324 basement parking stalls. 235 W Oak will be a four-story, 48-foot-tall townhome structure. There will be 24 townhomes, with one being affordable. Parking will be in the basement of 205 W Oak. This phase will continue the mid-block connection and pedestrian connections. The townhomes will be surrounded by green space, with private lawns separated from the public space. 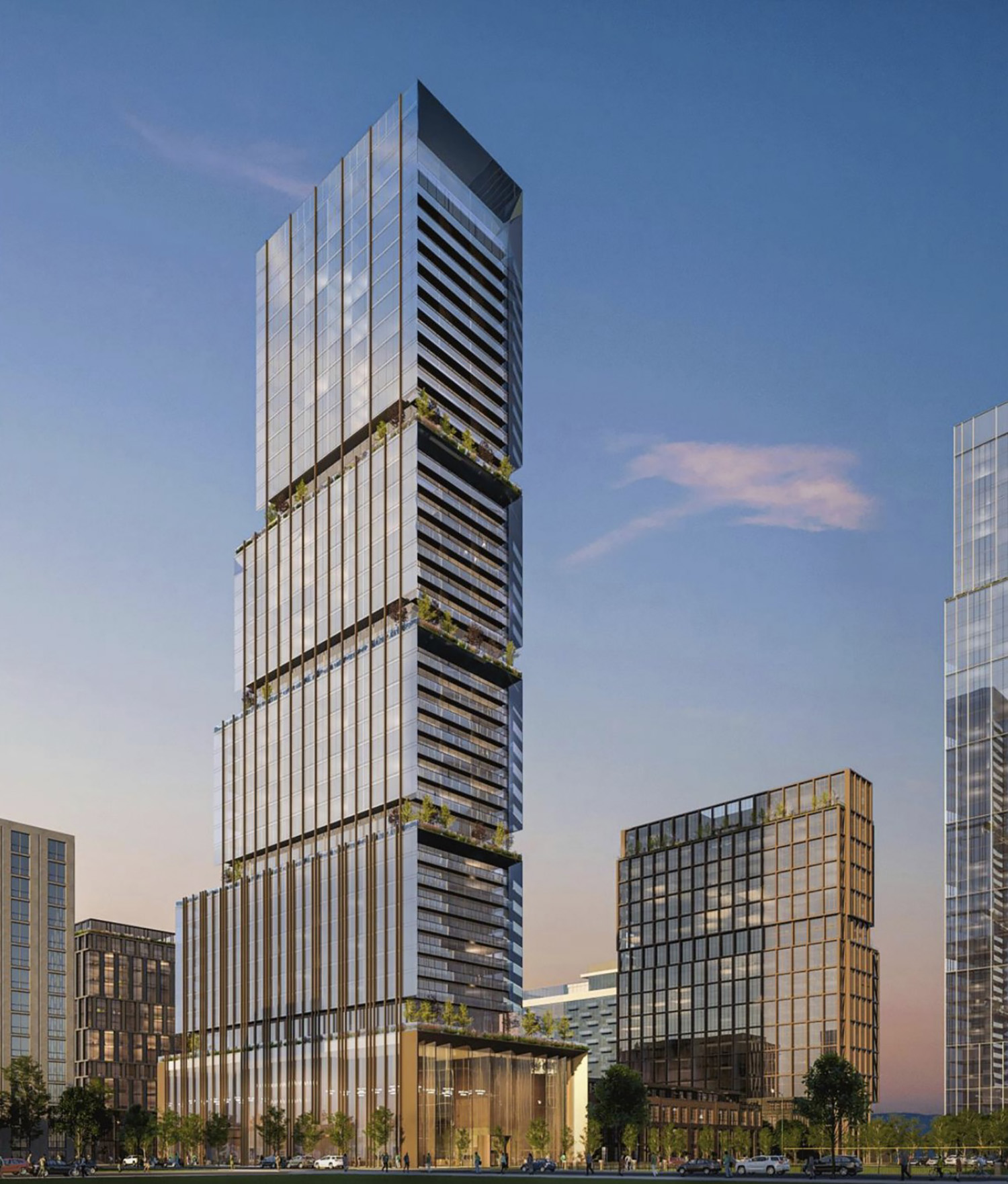 The fourth phase will be bound by Phase 3, the CTA Brown Line tracks, W Walton Street, and W Oak Street. 312 W Walton will be a 30-story, 312-foot-tall tower, holding 340 dwelling units and 212 parking spaces. 31 of the units will be affordable. 305 W Oak will be a four-story structure rising 48 feet. It will hold six townhomes, with one being affordable, as well as basement parking for 12 cars. Phase 4 will be joined to Phase 3 via a 20,000-square-foot great lawn with a playground. A pedestrian connection will be located between the two projects. 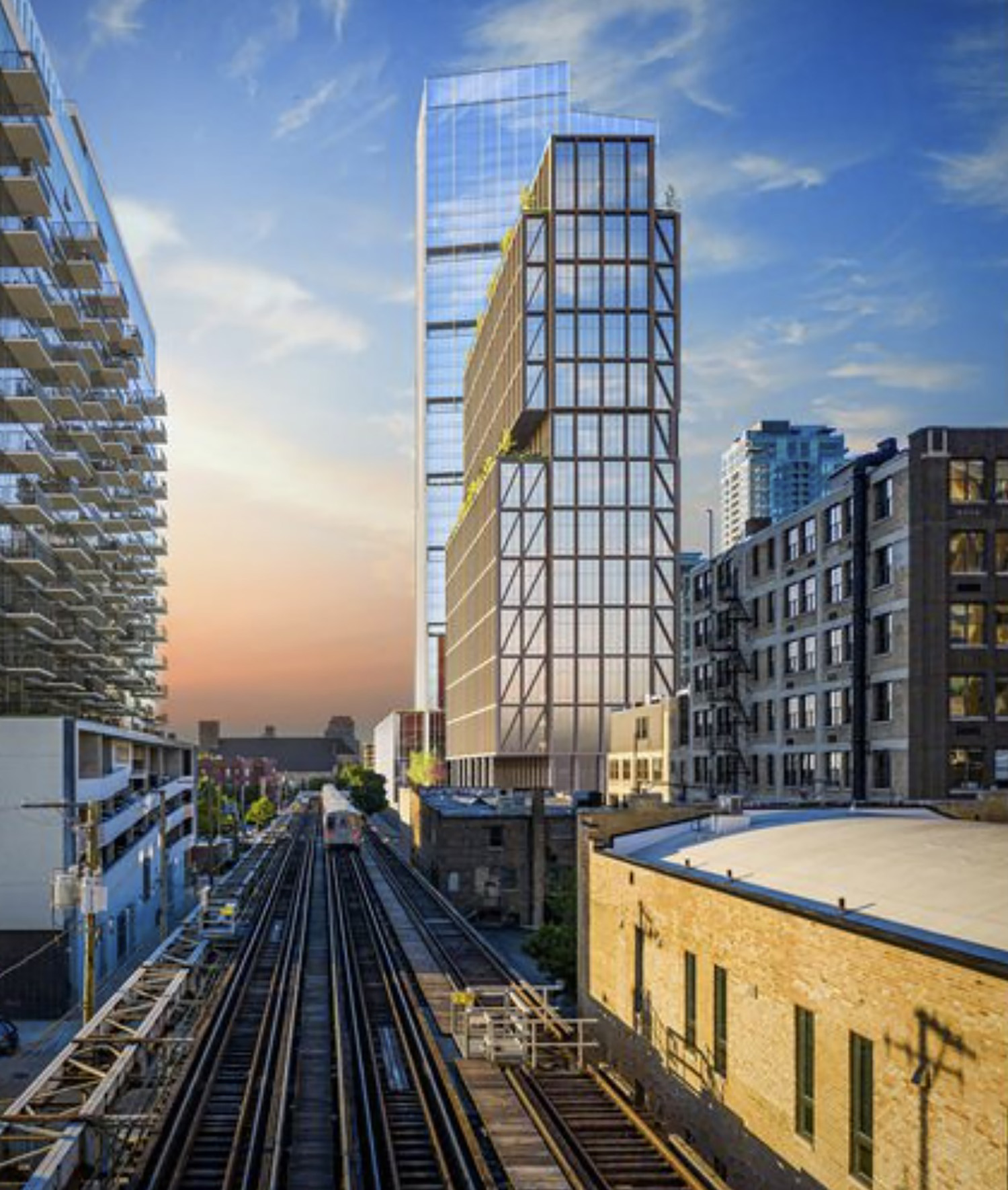 Phase 5, which is bound by the CTA Brown Line tracks, W Oak Street, and Walter Payton High School, will be the final phase. 310 W Oak will be a 47-story, 512-foot-tall residential building. The project will hold 508 residential units, with 47 of them affordable. 583 parking stalls will be located in a parking podium. 300 W Oak will rise 630 feet over 55 stories, holding 633 units, with 59 affordable residences. Both structures will have access to the parking podium as well as a dedicated auto court for pickups and dropoffs. A 26,500-square-foot dog park will be located at the base of the edifice with separate areas for small and large dogs. 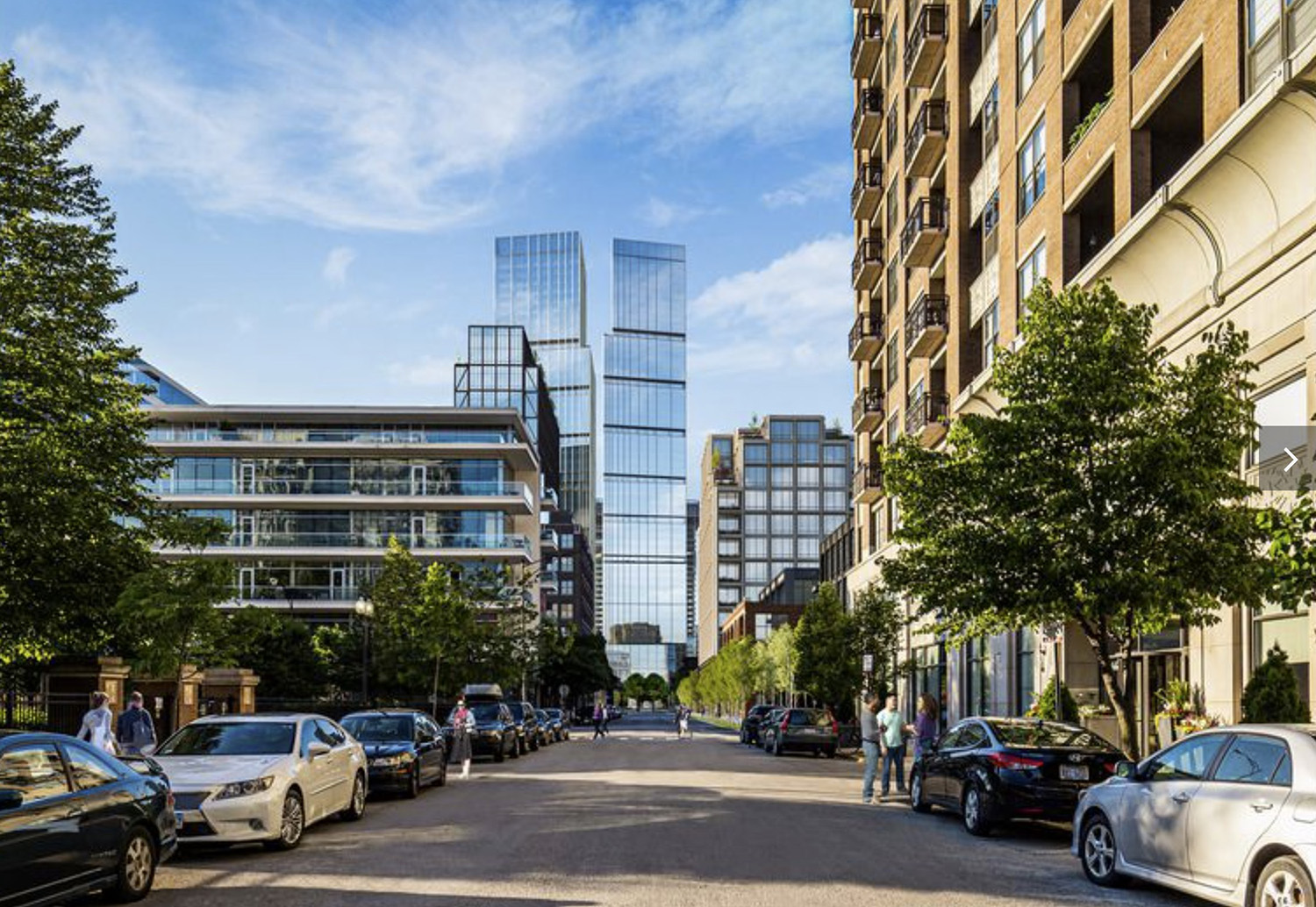 Parking is pushed underground to avoid visual obstructions. Cars access 310 W Oak and 300 W Oak via the auto court along W Oak Street, and can access the parking garage via the dead end of Wendell Street. Car access to 312 W Walton is along W Walton Street to mitigate traffic on W Oak Street. Car access to buildings in phase one, two, and three is placed off of N Wells Street to mitigate traffic and avoid collision between cyclists and cars. The development will perform infrastructure improvements, including stop signs, traffic signals, and slow down curbs. 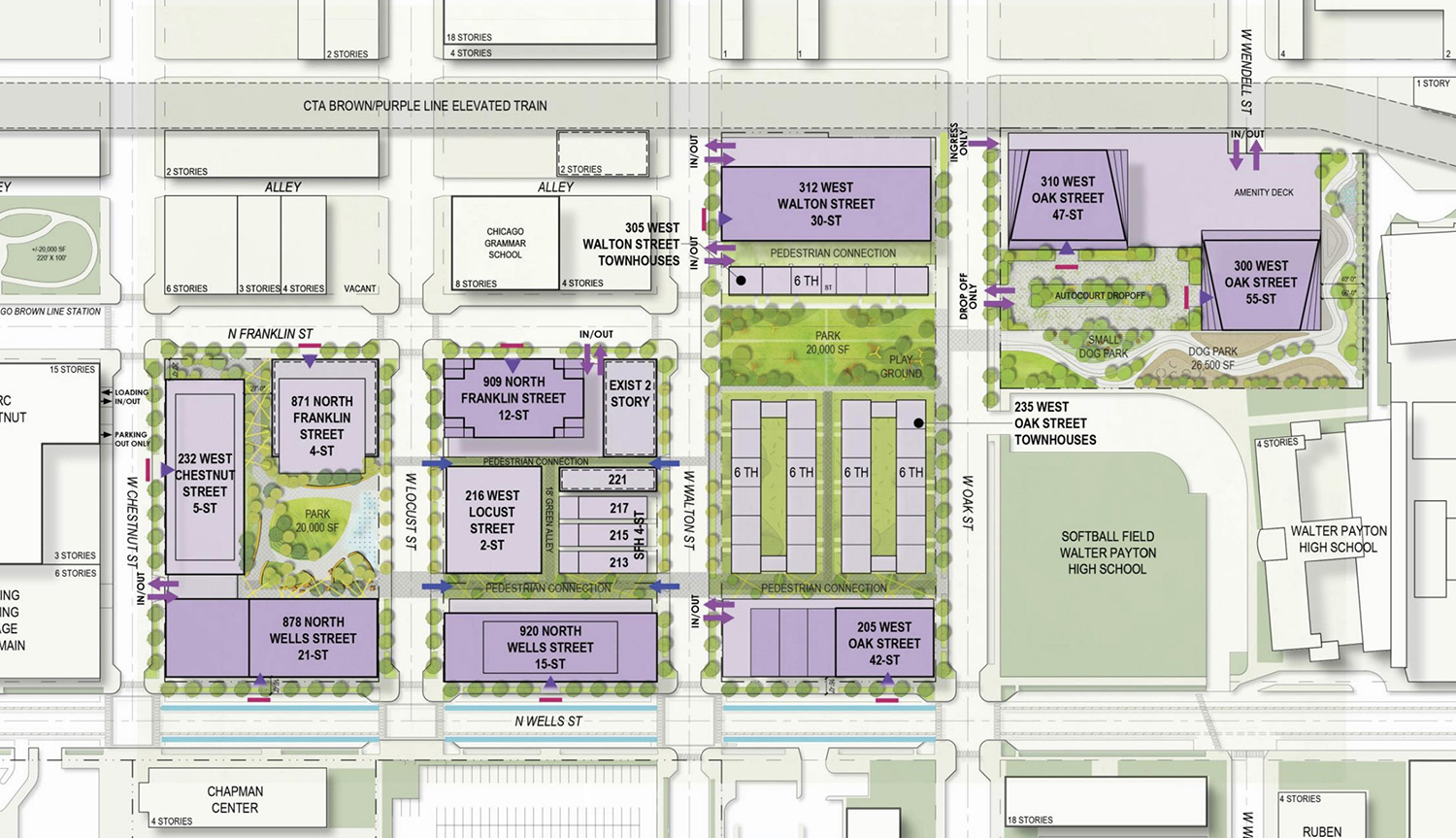 The development will be seeking LEED neighborhood certification. The site will feature permeable pavement, 1:1 bike parking for units, and electric car charging stations. Buildings will exceed the energy code by at least 10 percent, reduce indoor water usage by at least 25 percent, and 80 percent of construction waste will be diverted. 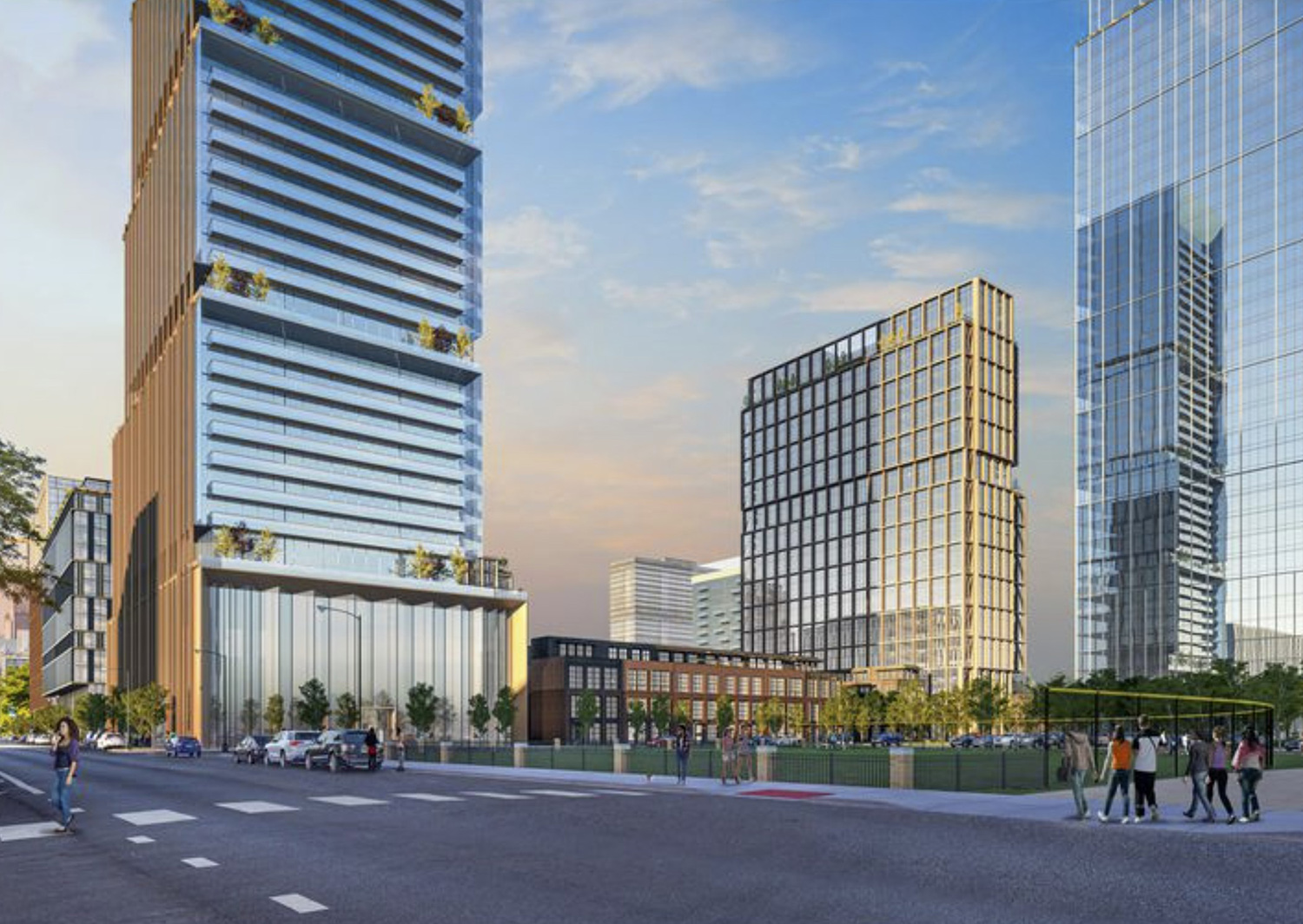 The 236 affordable residences will be evenly distributed across the complex and phases, with a mix of unit types including family-sized units. An additional $21 million will be paid into the affordable housing fund to build off-site units. 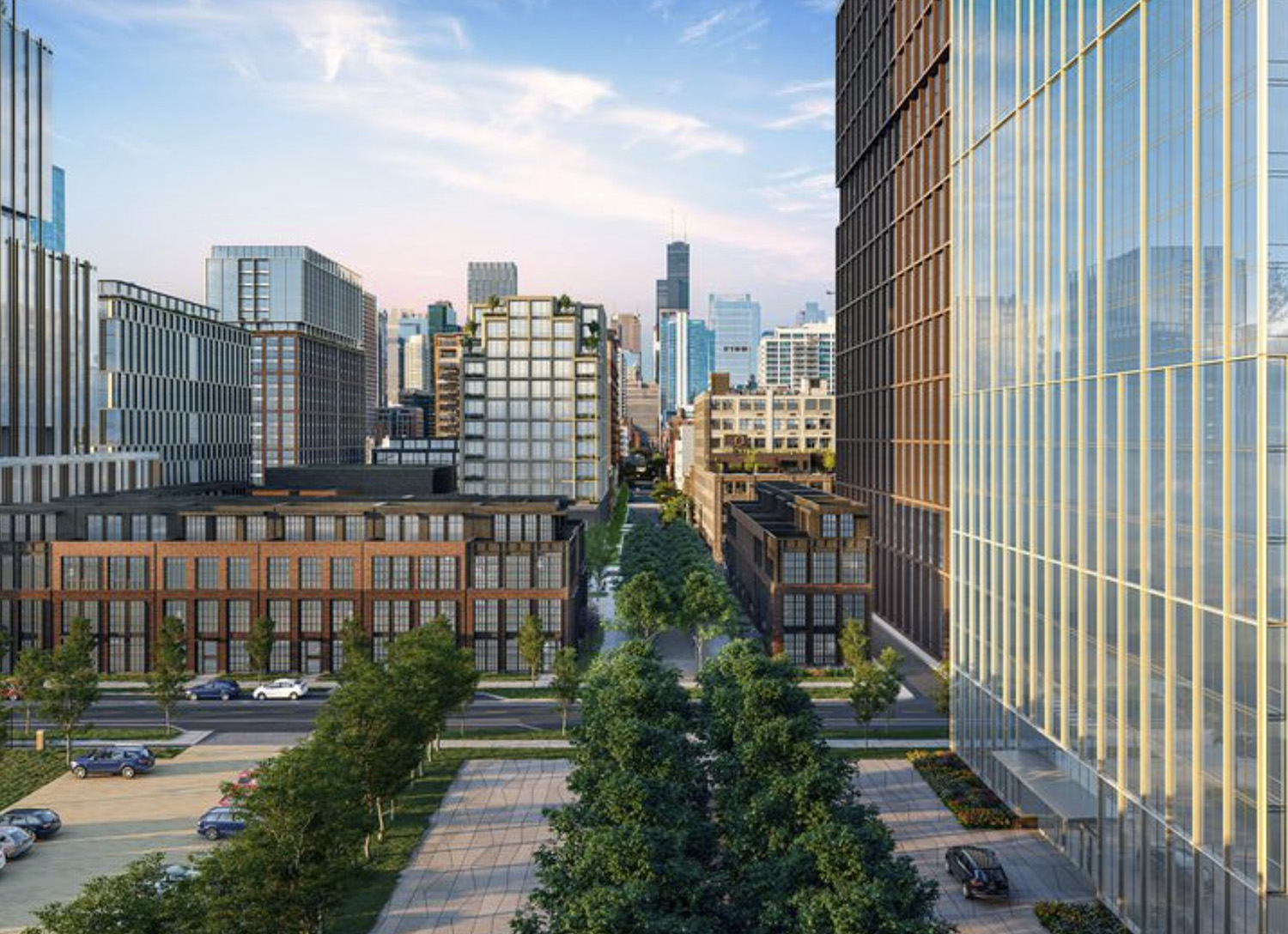 The $1.3 billion proposal will require approval from the city as a Master Planned Development. JDL intends to file its PD application with the City Council in coming months. Once filed, the PD application would be introduced to City Council and referred to a future Chicago Plan Commission hearing. Prior to the hearing, the proposal will be refined by the development team in coordination with city departments, local aldermen, neighborhood stakeholders, and the general public.