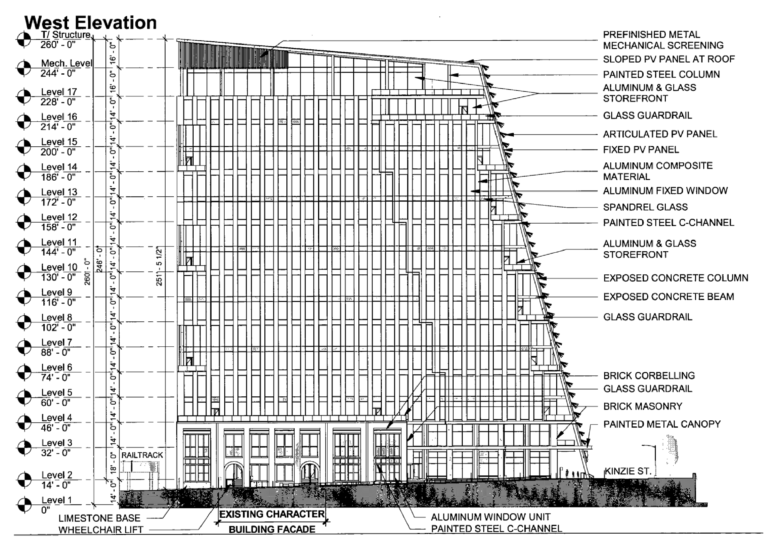 Initial details have been revealed for a new mixed-use development at 415 N Sangamon Street in the West Loop. Located on the corner with W Kinzie Street directly across from the upcoming Guinness Brewery, the new proposal will incorporate the existing multi-story structure on site and occupy the adjacent vacant lot. The developer Fortem Voluntas Partners is led by ex-Sterling Bay leasing agent Joy Jordan. According to Crain’s, they have partnered up with local architecture firm Eckenhoff Saunders on the design of the sleek new tower. 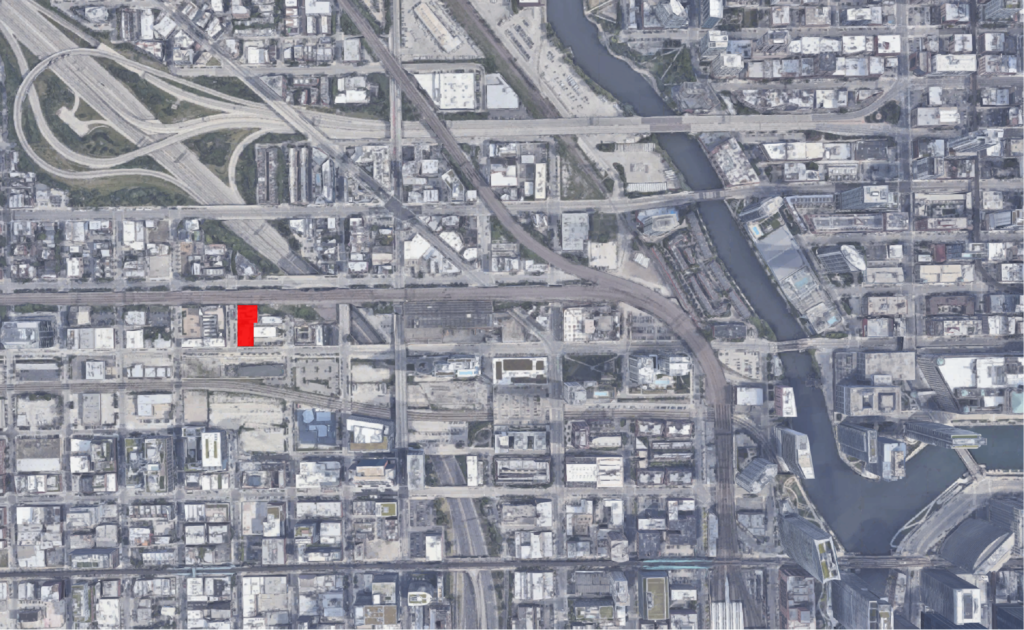 The existing two-story brick-clad building features arched red doors and inset window bays being built in 1913 with roughly 43,300 square feet of space. As of this spring it was rumored to have been recently sold along with the lot for around $11 million to the developer. The first round of plans were submitted to the Chicago City Council for this month’s meeting, but an approval has been deferred to a future session. However we do know that the team is requesting a zoning change from DX-7 Downtown Mixed-Use to that of a Business Planned Development which will allow it to avoid further approvals. 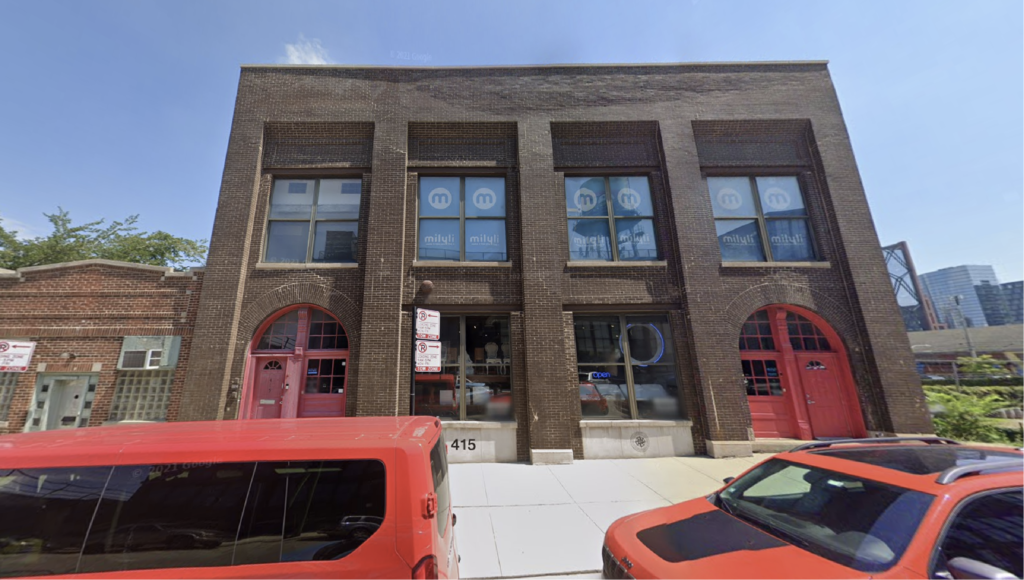 The 37,450-square-foot site will now hold a new 17-story tower rising 260 feet tall with a large angled edge on its south side. Located on an elevated street, the lower level will have 20 vehicle parking spaces along with various back of house spaces. Above that at the street level will be a large retail space inset from the tower above facing W Kinzie Street, lobby, bike storage room, and a secondary retail space accessed from N Sangamon Street. These will all be served from small linear plazas along the base with new trees, benches, and bike racks. 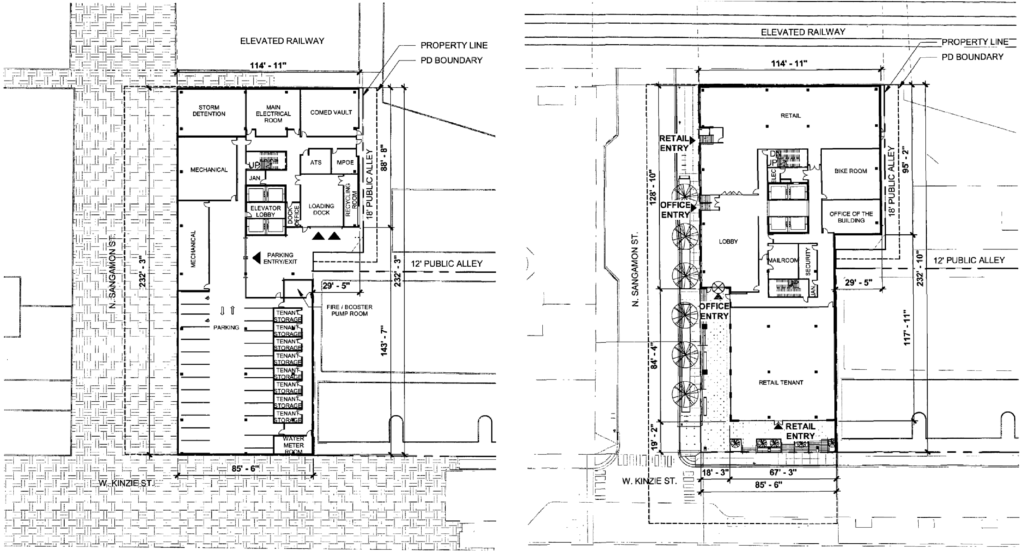 The remaining 15 floors above will deliver new office space, with floor plates ranging from 22,000 square feet at the base to roughly 17,000 square feet towards the top including the structural core. The massing’s south facade will angle in as well as feature two vertical setbacks from south to north, these will create plenty of outdoor space for tenants every two floors. Although not confirmed, we can expect a large rooftop outdoor deck and amenity spaces in line with similar projects including a gym, meeting rooms, and lounges. 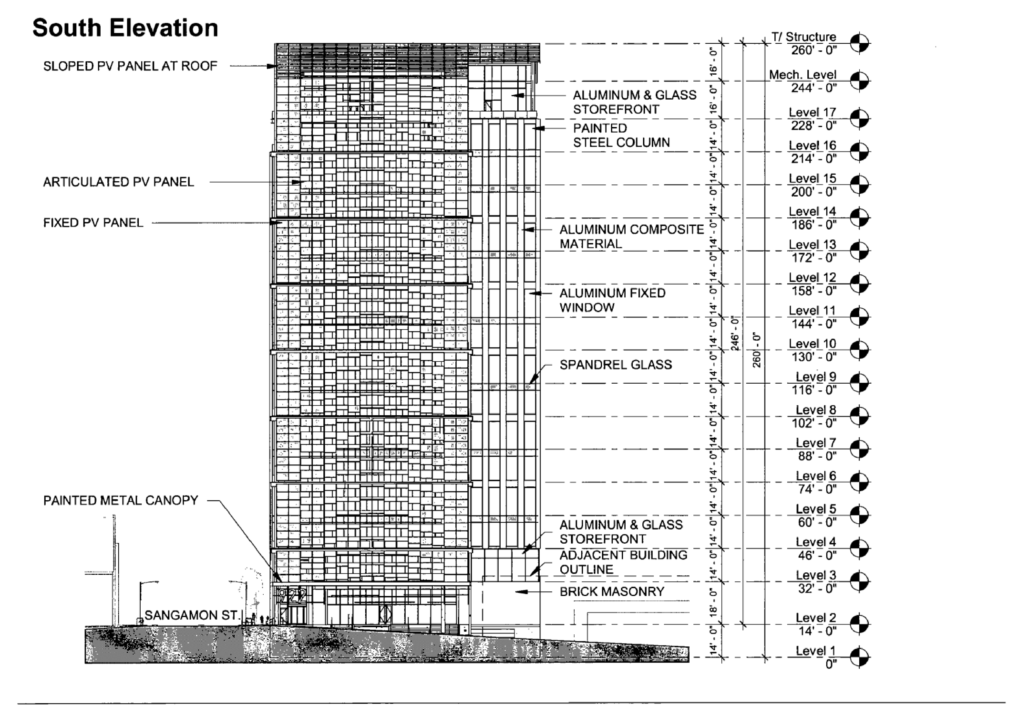 The slanting southern wall and roof will be used to hold both fixed and articulated solar panels, these will create shade for the space within as well as help lower energy cost and its carbon footprint. The rest of the tower will be clad in an aluminum curtain wall with spandrel glass, this will be pierced by exposed concrete columns and beams supporting the aforementioned balconies, providing a stark modern contrast with the existing brown brick facade that will be saved. 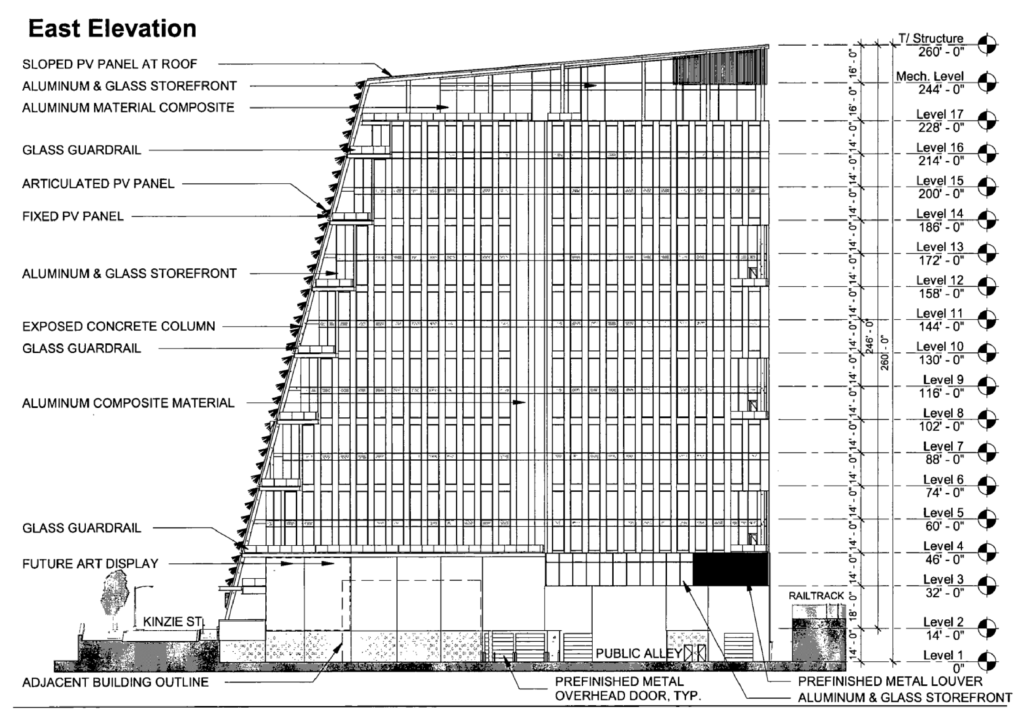 Users of the overall 267,200-square-foot building will have bus service from CTA Route 65 via a three-minute walk, Routes 8 and 56 as well as the CTA Blue Line at Grand station and CTA Green Line at Morgan Station all via a six-minute walk. This allowed the developers to offer the smaller parking ratio we see as it is a Transit Oriented Development (TOD). No budget or construction timeline has been revealed, though if approved it will be able to move towards a groundbreaking faster with its new planned development zoning.