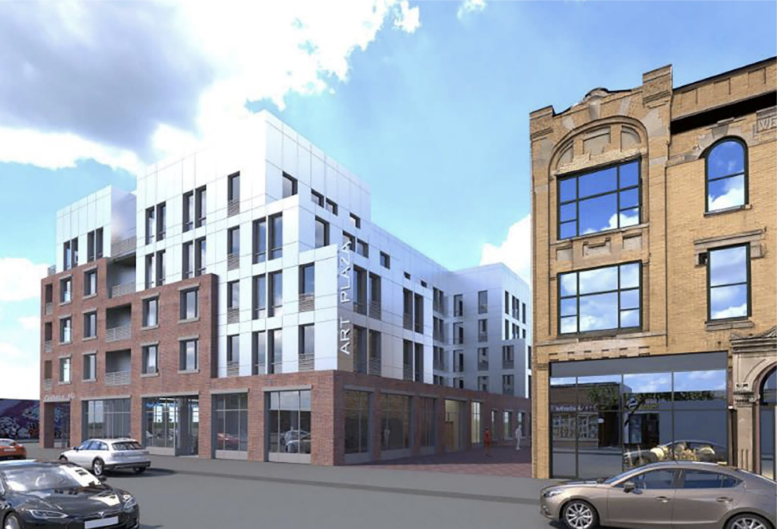 Rendering of Galleria 89 by Rivetna Architects and Farr Associates

Updated details have been revealed for Invest South/West winner Galleria 89 at 8840-8854 S Commercial Avenue in South Chicago. Located on the northwest corner with E 89th Street, the new project will replace a one-story commercial building with a new structure along with rehabbing an adjacent existing building. Led by developer 548 Capital and designed by the Rivetna Architects and Farr Associates, the concept was presented to the Committee on Design earlier this week.

Rendering of Galleria 89 by Rivetna Architects and Farr Associates

Taking inspiration from the surrounding context, the new-construction corner building has been re-designed from the initial renderings originally selected. Its now singular massing is more prevalent with a height increase and change in materiality. The five-story, 60-foot-tall building will hold 46 residential units split into 23 one-bedroom, 19 two-bedroom, and four three-bedroom layouts, some featuring two bathrooms and balconies, but all containing in-unit laundry, large kitchens with islands, and bedrooms with direct window access. 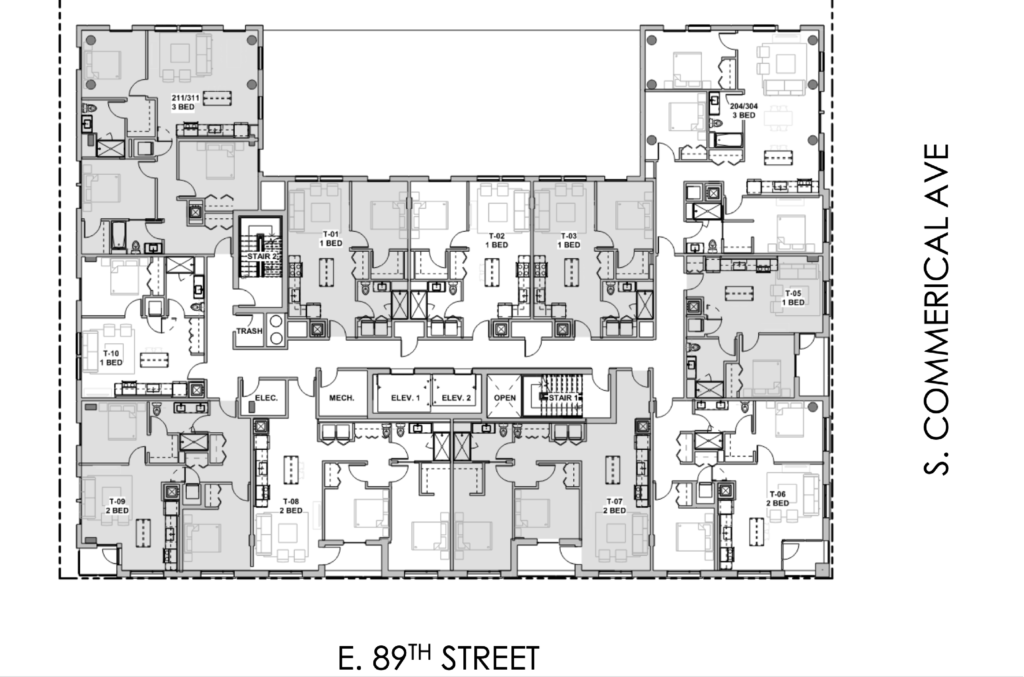 The ground floor will feature a large divisible retail space on the corner with entries on both surrounding streets hoping to include a cafe and business center, a large lobby with a small lounge, bike storage, and six-vehicle parking spaces directly behind the building with another 11 behind the building next door. The metal panel and masonry-clad structure won’t have any amenity spaces, but will be topped by solar panels to help lower energy cost for future residents.

The adjacent existing historical building will be rehabbed with most of its interiors removed in order to deliver 12 new residential units at the moment made up of entirely one-bedroom layouts. The ground-floor will contain a 787- and 1,214-square-foot retail space along with plenty of bike storage available on the basement floor; this building also won’t contain any amenity spaces. The exterior will receive multiple upgrades along with a few new balconies punched into the side facade facing the new courtyard between the two structures.

Future residents will have direct bus access to CTA Routes 5, 26, 71, and 95 as well as a short walk to the Metra 87th Street station. The $23.5 million project will consist of all affordable units, with a considerable bump-up from its original 45 units to 58. Although at the moment there is no set timeline for its construction, the project is moving forward through its approval process and neighborhood input.