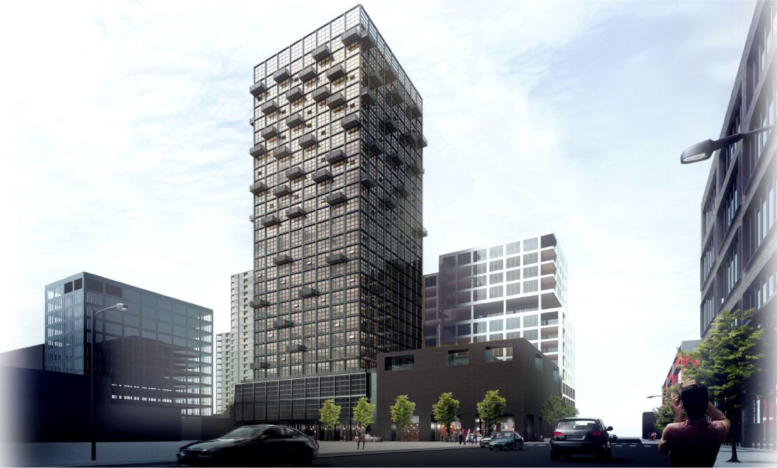 The Chicago Plan Commission has approved plans for the mixed-use development at 1353 W Fulton Street in Fulton Market. Located on the corner with N Ada Street, the new high rise replaces an existing industrial building on the quickly-growing corridor that has seen numerous high-profile proposals including a 600-foot-tall tower in the last few months. Developer Shapack Partners has been working with SOM on the design of the structure, which has undergone a handful of updates since we originally covered its announcement late last year. 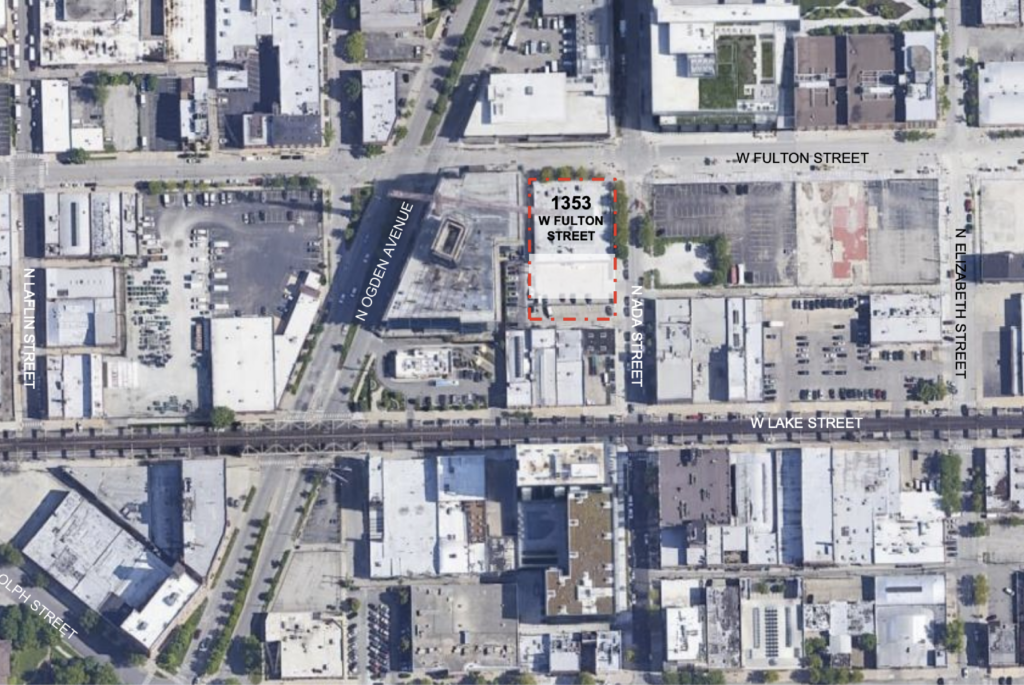 The tower is one story shorter and now rises 28 floors, but its architectural height remains roughly the same topping out at 314 feet tall with the mechanical penthouse. The ground floor will include a residential lobby off of N Ada Street accessed from an inset entrance, along with over 16,000 square feet of retail space with a roughly 1,000-square-foot inset patio at the corner with W Fulton Street offering opportunities for outdoor dining and more. 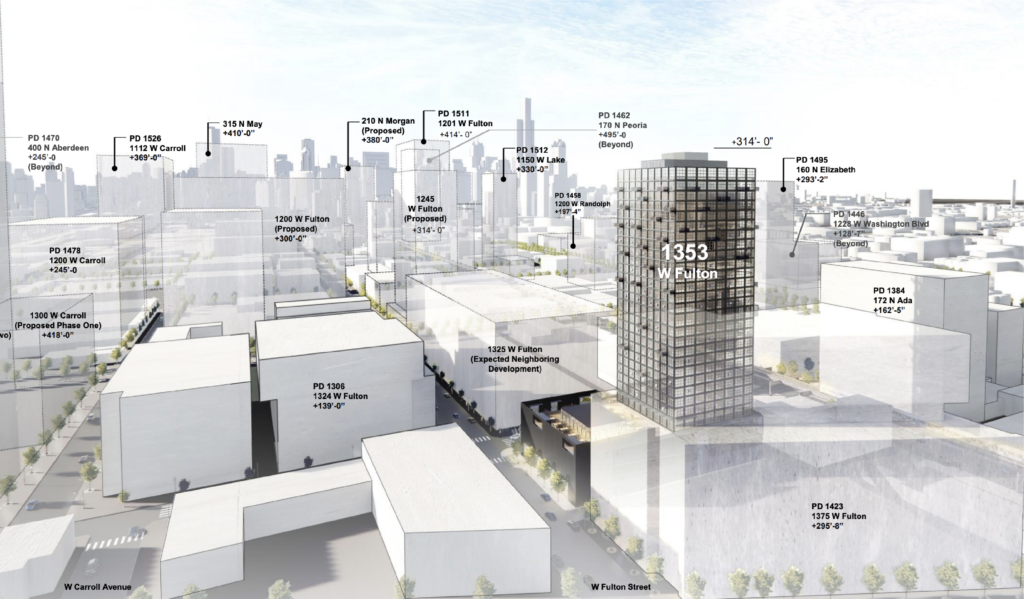 Behind the residential lobby will also be the entrance ramp to the parking garage levels above from the existing alley. The parking garage itself is one of the main changes to the design receiving a reduction from four to two stories, this also came with a reduction of spaces from the originally announced 196 to 115, just slightly above the required 111 parking spaces due to its proximity to transit the Fulton Market pedestrian street. 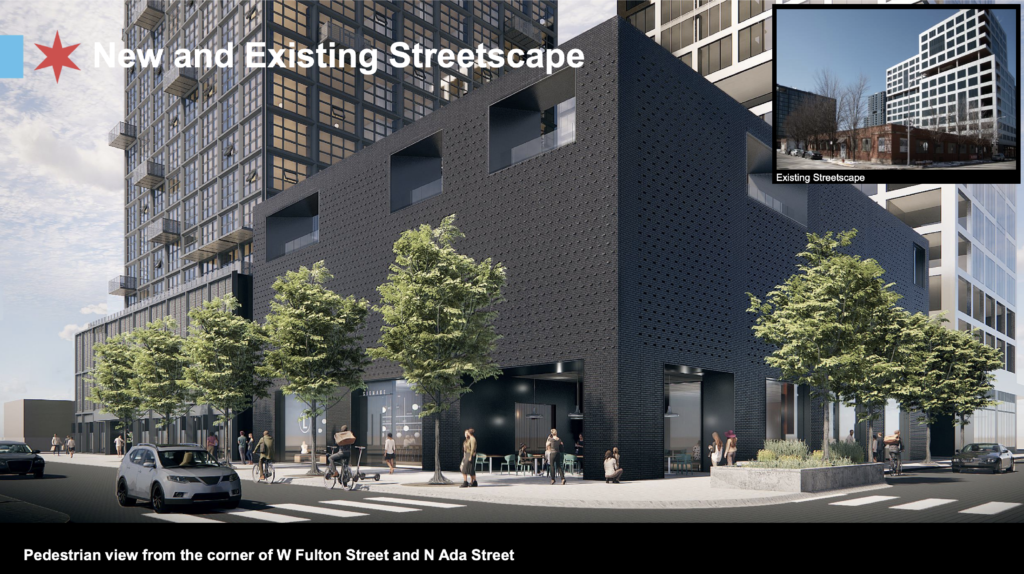 The tower being located on the southern end of the lot allows it to be further away from adjoining buildings and maintain a lower height along Fulton respecting the historical context, this corner received a redesign. Previously the podium was a singular expression clad in the same facade as the tower, but now appears to be a separate entity breaking up the ground-level massing. The corner will now be clad in black protruding brick with openings on the amenity deck, and the removal of the floating corner.

The floors above will hold 305 residential units, a reduction from 316 in the previous plan, with around 13 per floor split roughly into 115 studios, 138 one-, and 46 two-bedroom apartments on floors five through 27, and an additional six units on the fourth floor. Of those, 61 units will be affordable offered to residents making 40, 50, and 60 percent Area Median Income (AMI). Residents will have access to over 13,000 square feet of amenity space including a massive outdoor deck with pop-up space on the fourth floor, and a major outdoor deck on the 28th floor with a pool. 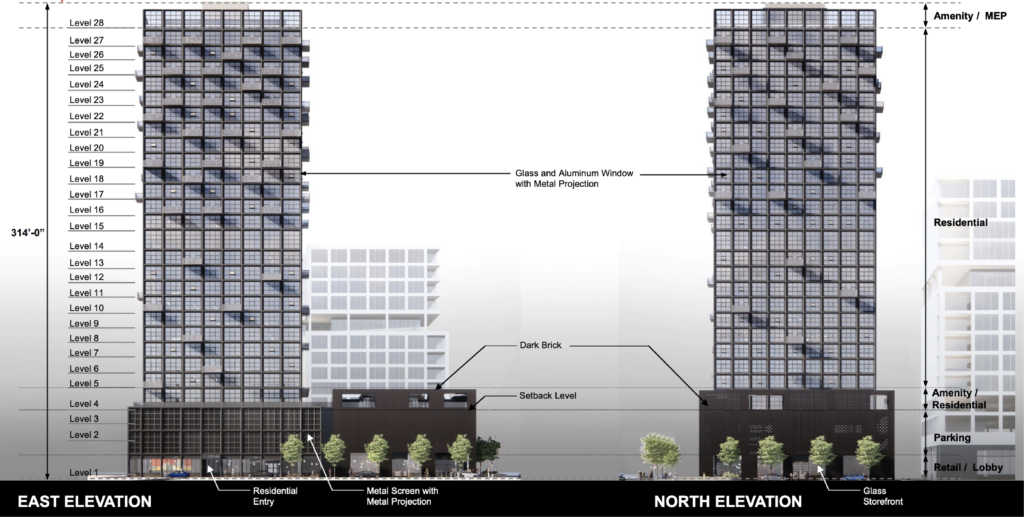 The tower has also received further iterations to its glass and aluminum facade with metal projections, with windows being split into nine quadrants with some being operable and an increase in the amount of hanging balconies. Demolition on the existing building is scheduled to start mid-2022 with previous plans to begin construction on the tower later this year.