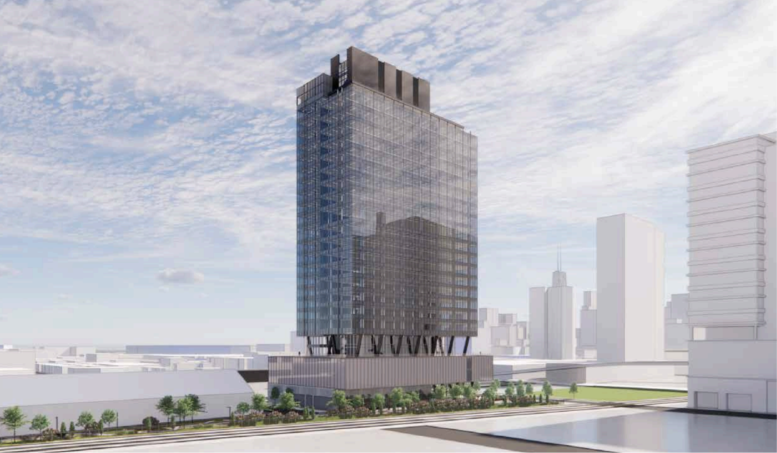 Rendering of updated design of 360 N Green Street by Gensler

Updated details and renderings have been revealed for the mixed-use development at 360 N Green Street in Fulton Market. Located north of the Metra tracks, the currently vacant lot will be replaced by the tower and a small pocket park developed by Sterling Bay with Gensler providing design services for the project. This will be the third iteration we’ve seen of the finalized design and presented to the community yesterday with further explanation of the changes. 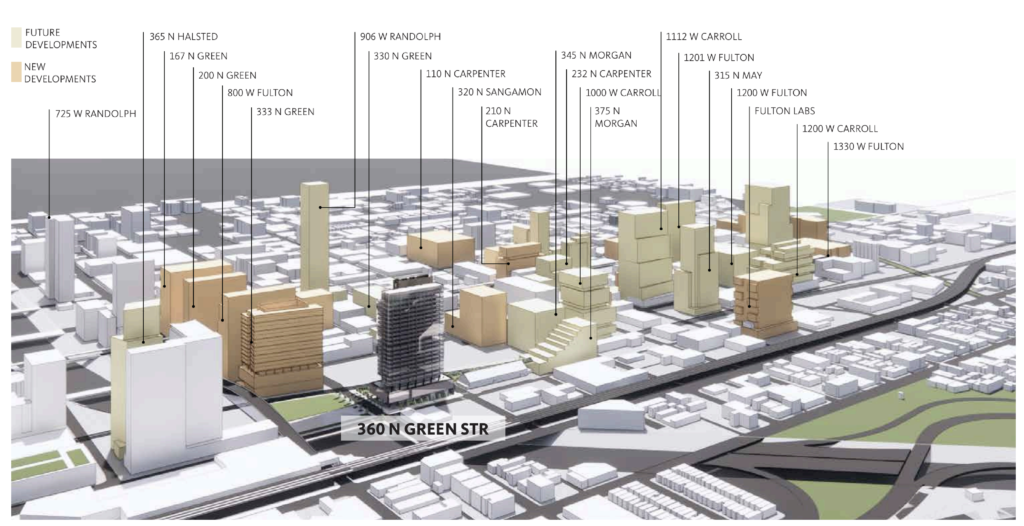 Since our last coverage on the building in October, plans have slightly altered as Sterling Bay continues to court tenants with recent news of Boston Consulting looking to ink a lease in the new structure. The newest plans call for a small height reduction, the originally 298-foot-tall 2018 proposal then grew to 425 feet in 2021 and now is slightly shorter at 399 feet, with the northern decorative crown receiving the majority of the cut as the floor count remains the same at 24 usable floors. 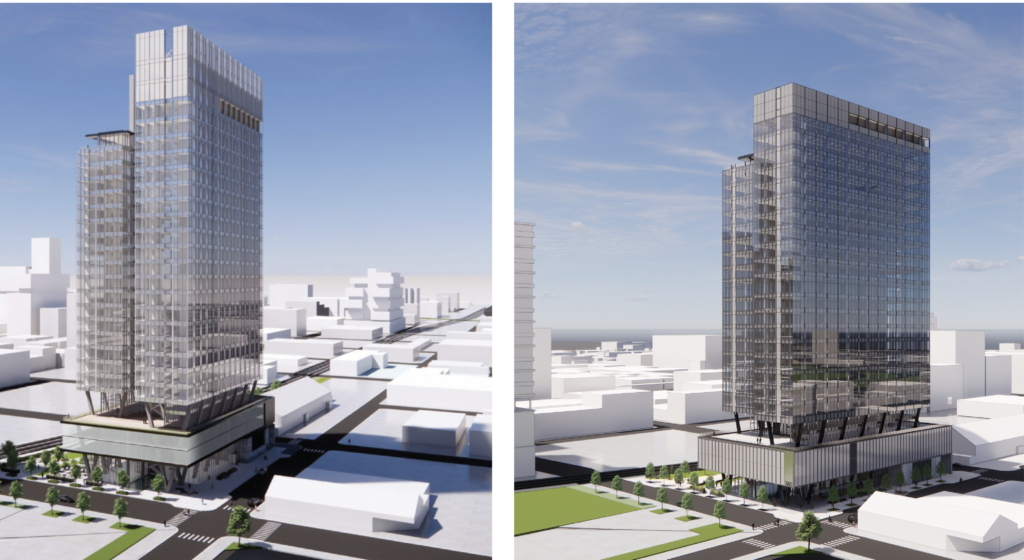 The tower will still offer relatively the same 498,844 square feet of space that has been with the proposal since its first, much wider iteration which called for 256 vehicle parking spaces, cut down to 90 spaces in 2021 which remains in its 2022 update. The whole building also moved slightly north towards W Kinzie Street to now accommodate 30 percent more green space, with the ground-floor park space adjacent to the tracks receiving a winding path cutting through the site with plenty of planters, seating areas, and dense foliage abutting the tracks themselves. 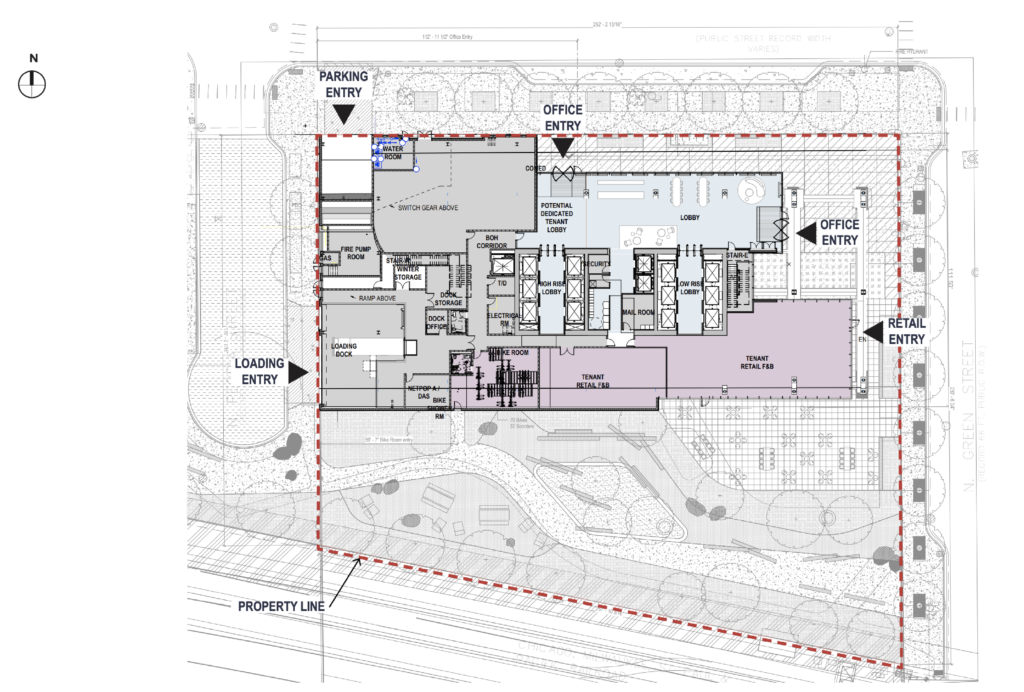 We now also have more information on the first floor which will hold two retail spaces facing the small park with a large outdoor plaza for dining, and a main office entrance to the large lobby under the building cantilevering above on Green Street. A secondary entrance off of Kinzie Street will also be available that can be closed off with its own elevator bank if a future tenant wants its own dedicated lobby space. 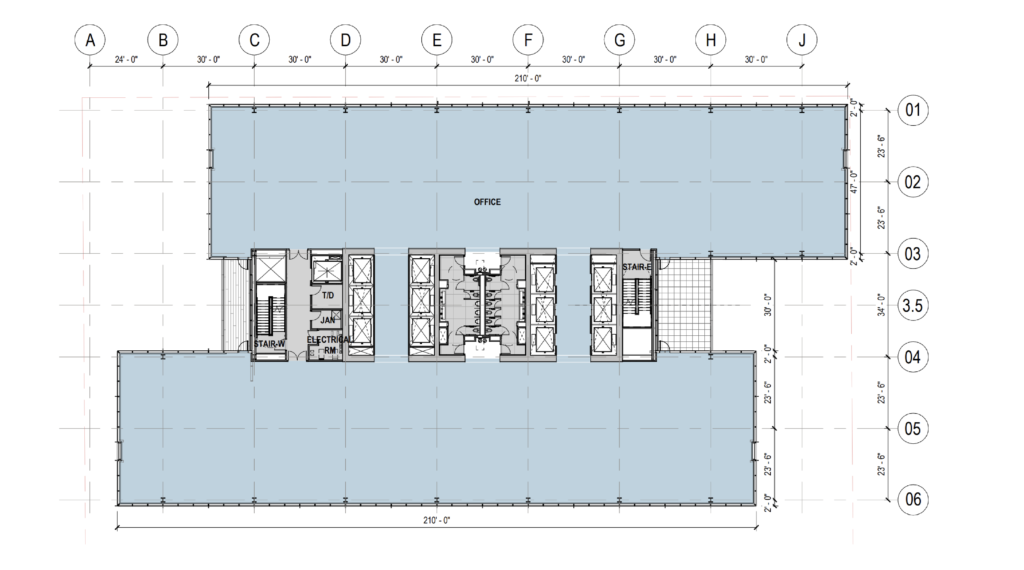 The entrance to the parking garage on levels two and three is also off of a new curb cut on Kinzie Street, with floors four and five above being amenity spaces including a large fitness center with a studio for classes, a large lounge, private rooms, and plenty of outdoor space on a rooftop deck that wraps around the tower on top of the podium below. Above, the structure’s staggered box design also allows for floors to be easily split between two tenants with every floor also having two outdoor balconies. 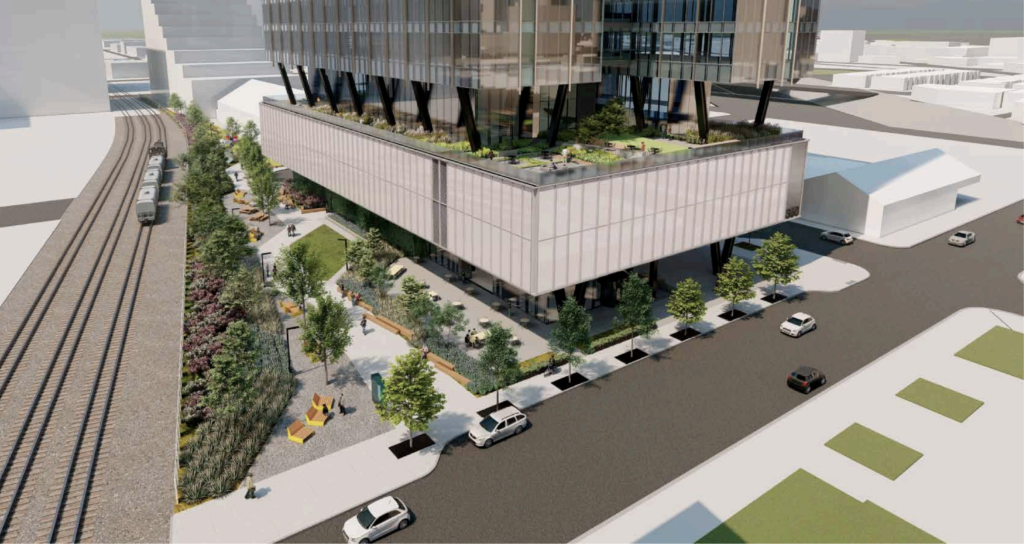 Material wise the design has remained constant using an aluminum frame curtain wall with spandrel glass on office floors, a back-painted glass system enclosing the parking garage levels, and large V-shaped columns supporting the tower from below. With the crown’s height reduction, the central core clad in metal panel will be the tallest portion of the tower with an outdoor deck on top of the southern extrusion.

Sterling Bay will move forward with the project following their successful 333 Green property nearby, and aims to submit plans to the plan commission this spring after securing a contract with Power Construction to execute the design.To make it happen they will be paying $4.4 million to the Neighborhood Opportunity Fund, and is expected to break ground this summer.