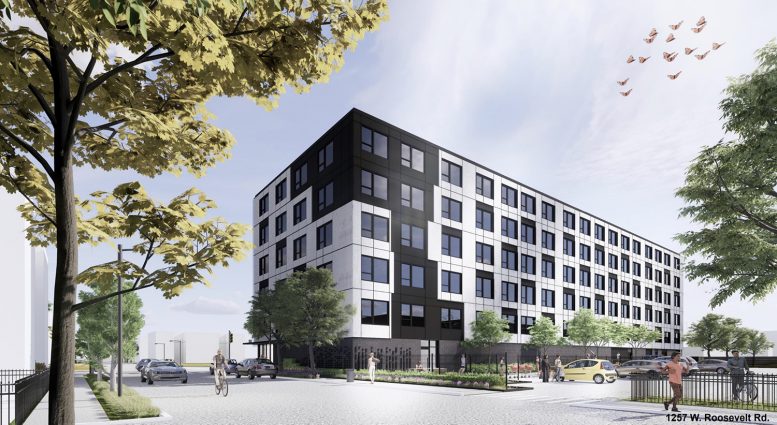 View of 1257 W Roosevelt Road at Roosevelt Square 3B. Rendering by DesignBridge

The Chicago City Council has approved the financing and land-sale for the Roosevelt Square Phase 3B mixed-use development in the Near West Side. Located across multiple parcels mainly around W Taylor Street and W Roosevelt Road, the project is part of the greater Roosevelt Square Plan that includes the rehabilitation of existing apartments, construction of new housing, and a new National Public Housing Museum. The effort is being led by Related Midwest and the Chicago Housing Authority along with various local design firms. 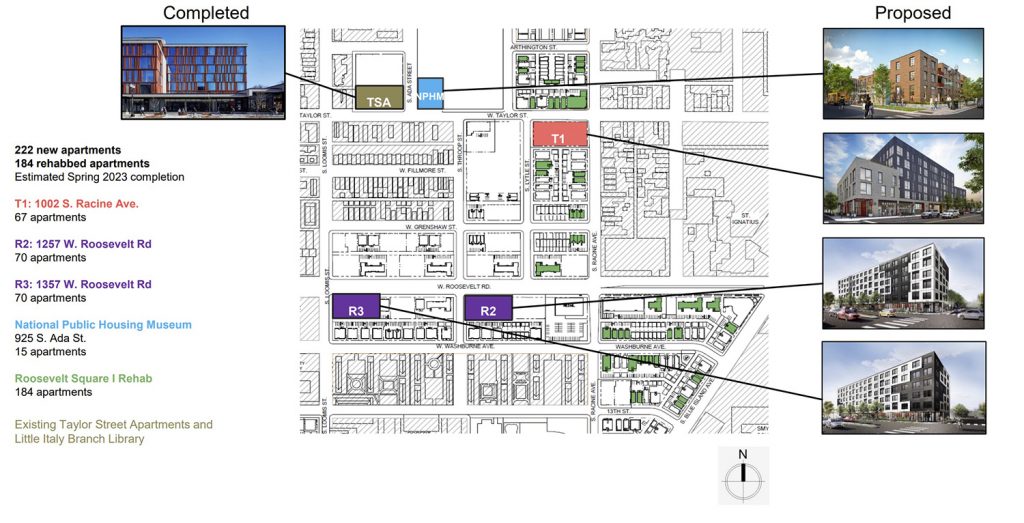 Overview of Roosevelt Square 3B. Image by Related Midwest 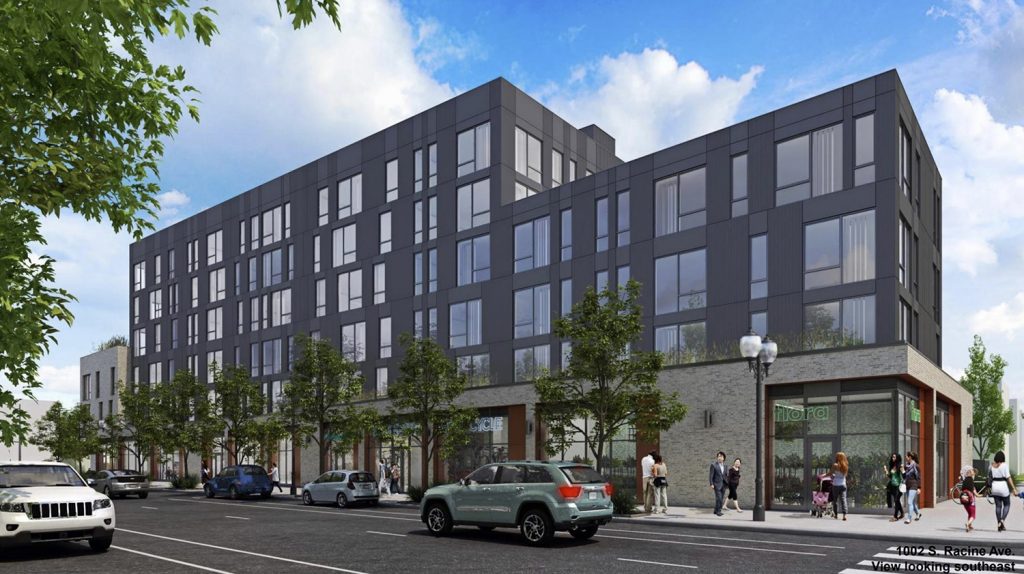 View of 1002 S Racine Avenue at Roosevelt Square 3B. Rendering by Moody Nolan and LBBA

The six-story mixed-use building will contain 67 apartments of which 17 will be CHA units, 10,000 square feet of retail space, and 34 vehicle parking spaces in the rear. The brick and metal panel-clad Moody Nolan– and Landon Bone Baker Architects-design will feature a shorter three-story section that will fit with the neighborhood’s overall massing, as well as has signed a grocer for its ground-floor space. Residents will get access to indoor and outdoor amenity spaces and a fitness center. 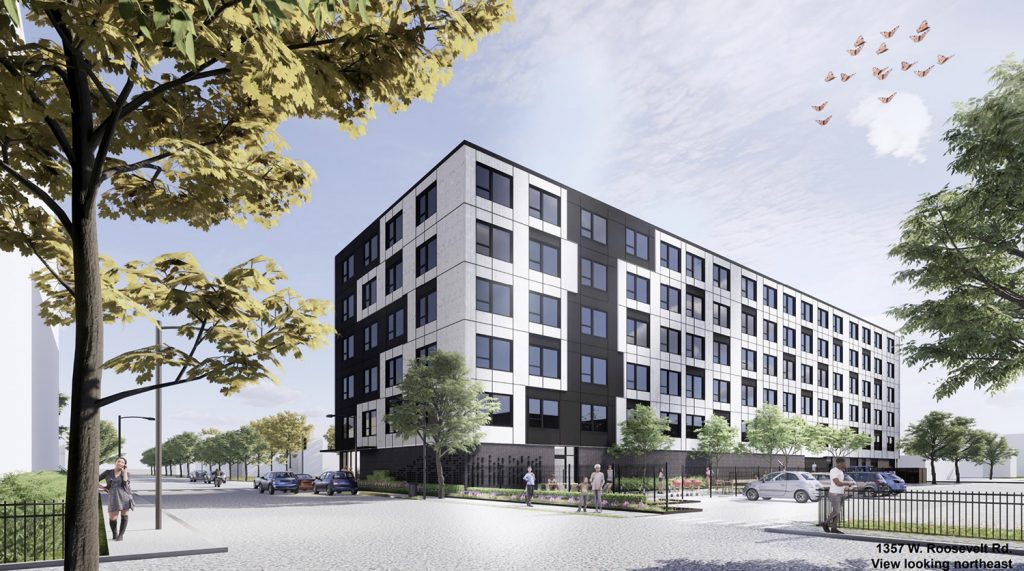 View of 1357 W Roosevelt Road at Roosevelt Square 3B. Rendering by DesignBridge

The twin-buildings designed by DesignBridge will both rise six stories in height clad in a two-color metal panel system creating a facade that appears to be breaking apart, but unify the two in a similar aesthetic. Each of the two structures will hold 70 apartments of which 29 will be CHA units, 21 market rate units, 40 covered and uncovered vehicle parking spaces, and amenities including outdoor spaces, dog runs, and fitness rooms. 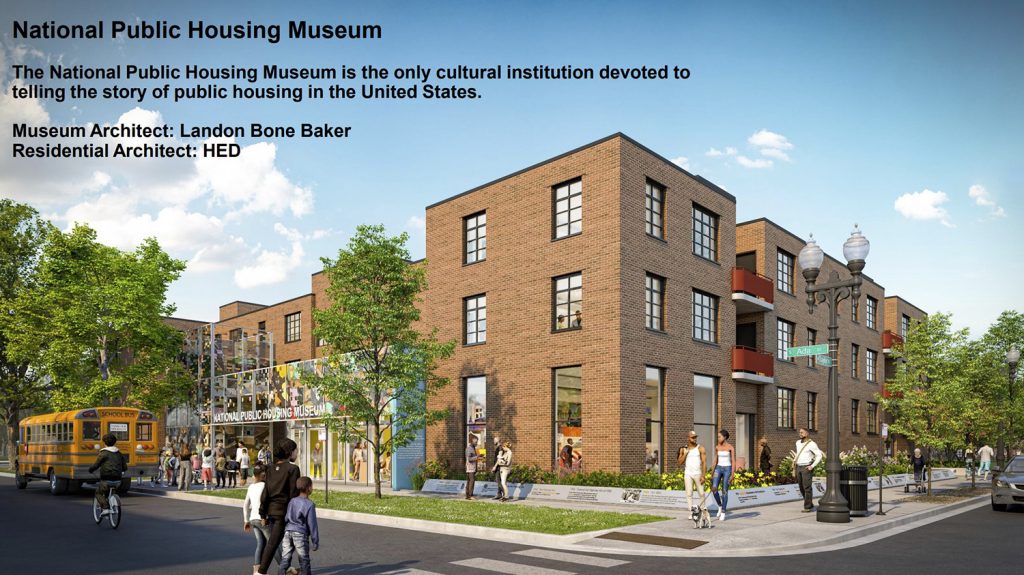 925 S Ada Street at Roosevelt Square 3B. Rendering by HED Architects and LBBA

The last remaining building of the once sprawling Jane Addams Homes will be restored and split into two with the southern half of the building becoming the new National Public Housing Museum and the northern half becoming 15 apartments. The Landon Bone Baker Architects-designed museum will hold new state-of-the-art exhibits and education opportunities for the whole city. The HED Architects-designed residences will be split evenly into CHA, affordable, and market-rate units. There will also be 37 vehicle parking spaces available to all north of the building. 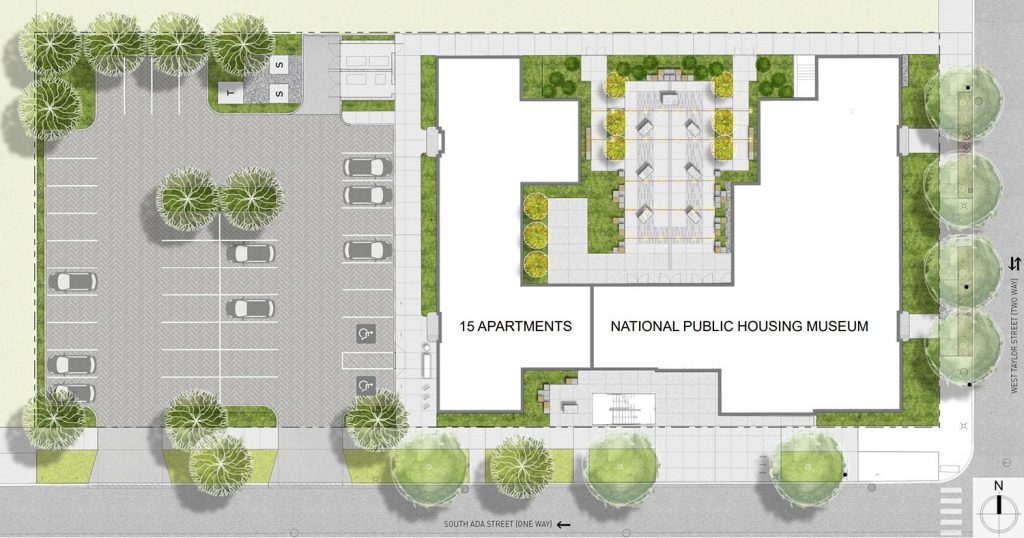 Although not many details have been revealed, this portion of the project will renovate 184 apartments across 49 existing buildings in the neighborhood located on Arthington Street, W Taylor Street, S Lytle Street, S Racine Avenue, W Roosevelt Road, S Blue Island Avenue, Washburn Street, And 13th Street. 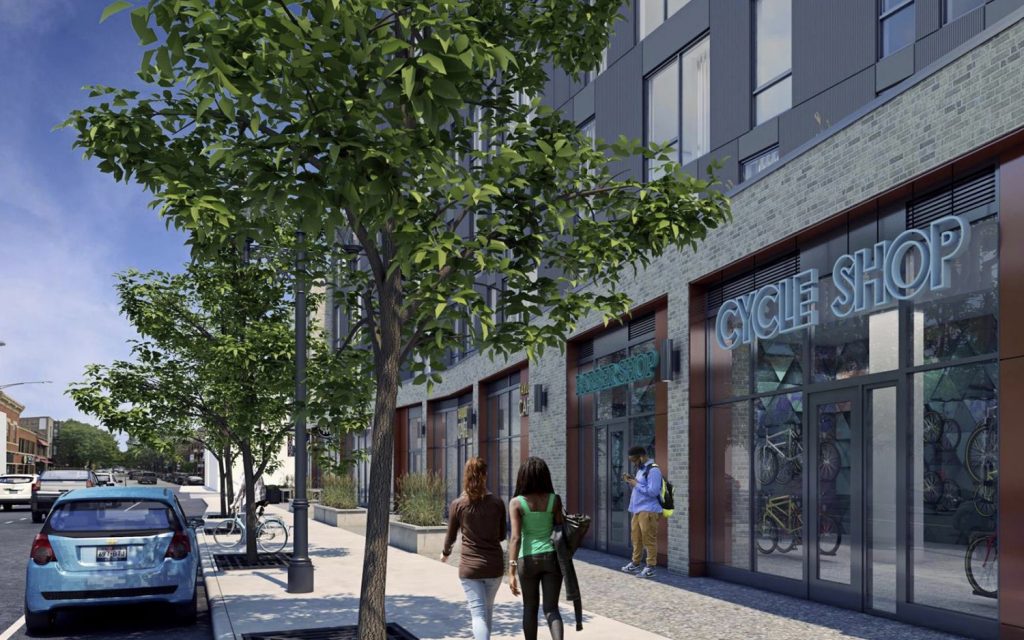 Street View of 1002 S Racine Avenue at Roosevelt Square 3B. Rendering by Moody Nolan and LBBA

The approval will allow the sale of multiple lots for $1 each to the CHA as well as grants nearly $180 million in funds for the project. Those consist of a $33 million construction loan, $27.5 million permanent loan, $16.5 million taxable loan, $35 million CHA loan, $2.25 million donation tax credit loan, $5 million seller loan, $17 million in Tax Increment Financing (TIF) funds, and a $43 million Low-Income Housing Tax Credit (LIHTC). At the moment no construction timeline has been established although originally the developers planned to complete the project in 2023.