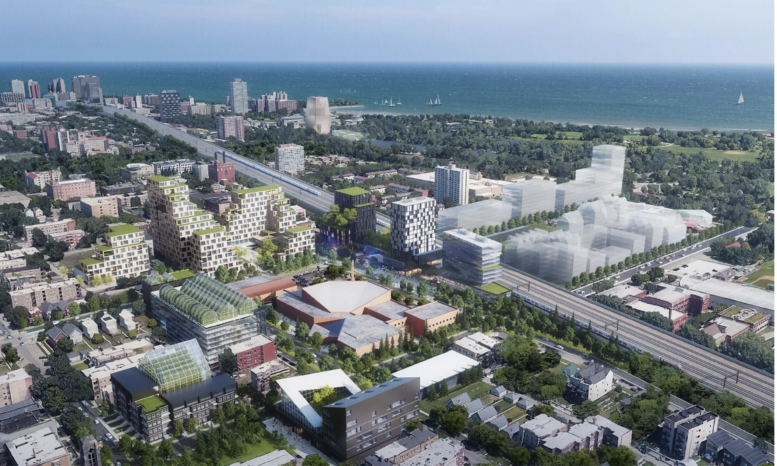 To ring in the new year, plans for a new mega-development have been revealed for the parking lots surrounding the Apostolic Church of God in Woodlawn. Dubbed ‘Woodlawn Central’ the project would redevelop eight parcels of vacant land and parking lots into 1.25 million square-feet of mixed-use space focused on benefiting the area. The large team is led by developer Woodlawn Central LLC and The Apostolic Church of God with Sherwood Design Engineers from San Francisco on the design side. 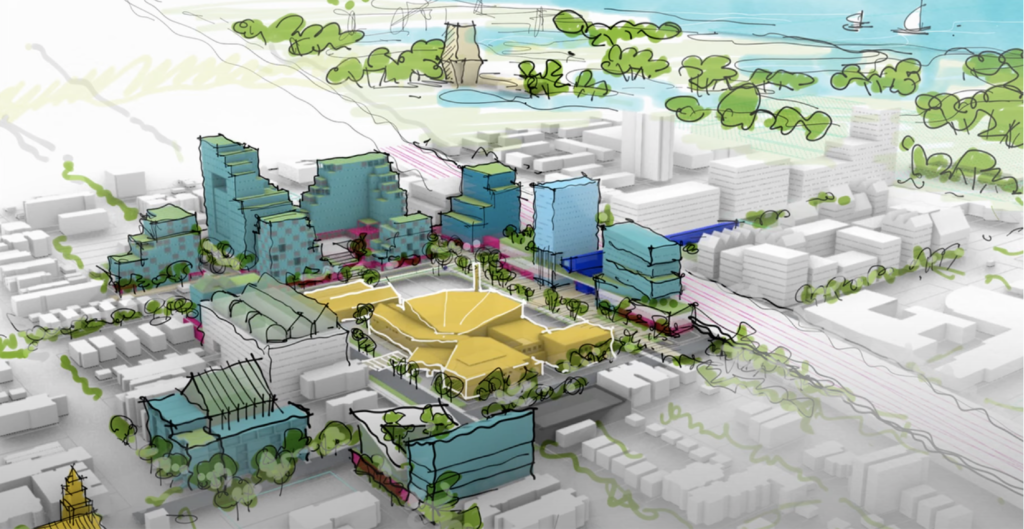 The existing church building and parking lot on the southwest corner of E 63rd Street and S Dorchester Avenue will remain untouched and be at the center of the new district. To better understand the 8-acres of parcels, we will break down the ‘blocks’ in a clockwise order starting directly north of the church: 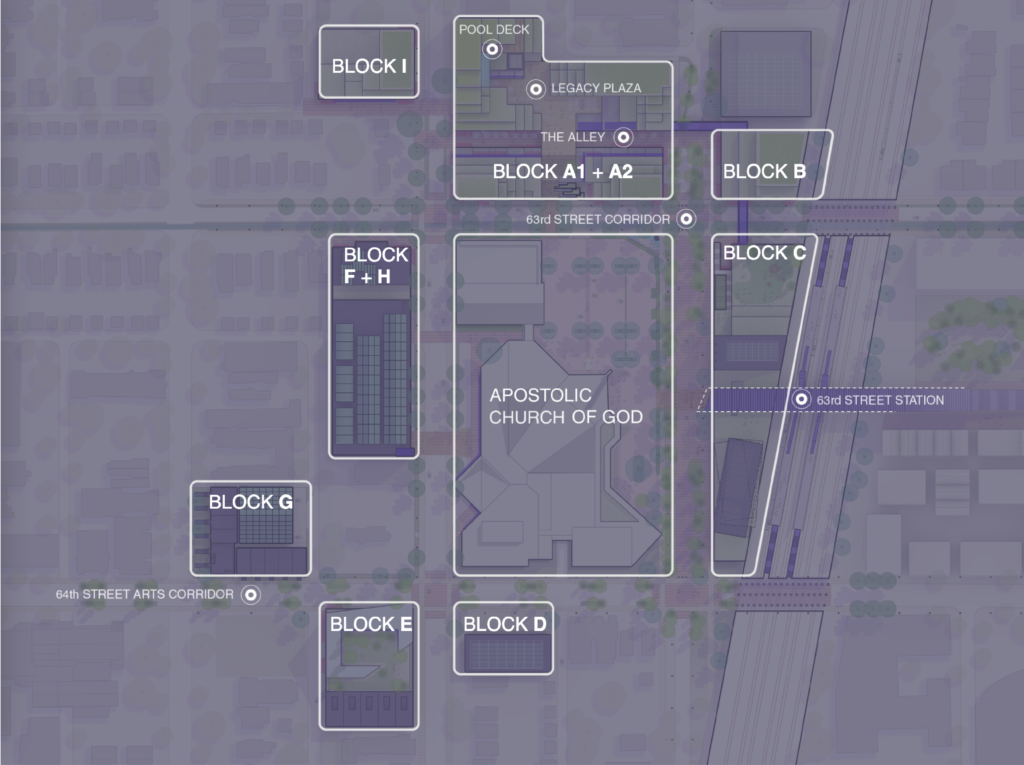 Block A1 + A2 – The largest of the lots, north of 63rd Street will contain 605 residential units, 47,000 square-feet of office and retail space, as well as a parking structure in a cubical stacked design.

Block B – North of 63rd Street and bound by Metra tracks on the east, a new office structure with multiple setbacks and outdoor terraces will offer 110,000 square-feet of office space with 16,000 square-feet of ground floor retail space. 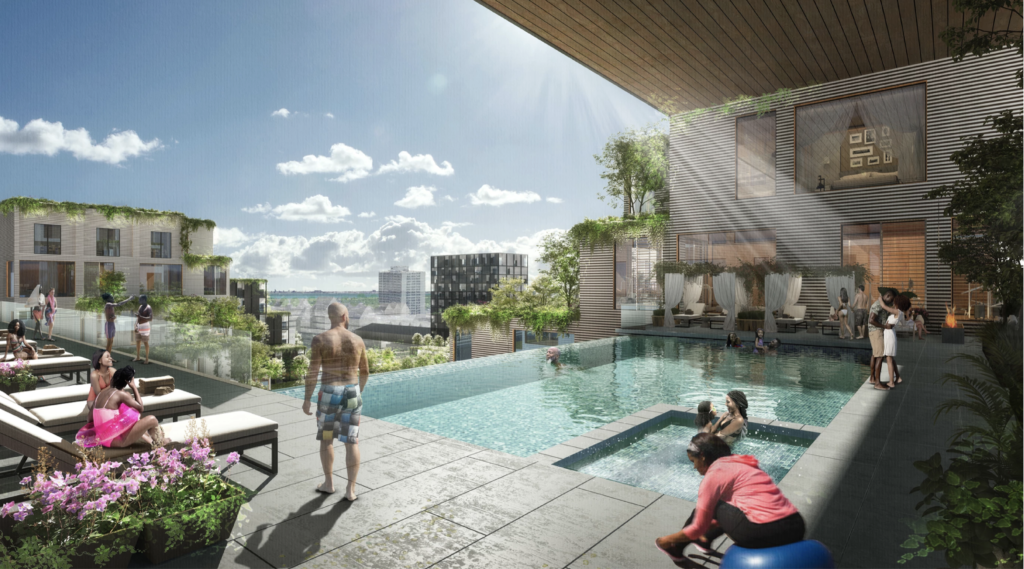 Block C – The second largest, wedge shaped lot is bound by 63rd Street on the north, 64th Street to the south and the Metra tracks to the east, the lot will welcome visitors with access to the existing 63rd Street Metra station splitting the parcel in two. Built on it will be 48 residential units, a 154-room hotel, 22,500 square-feet of retail, a parking podium, and the aforementioned 15,000 square-foot Metra headhouse. 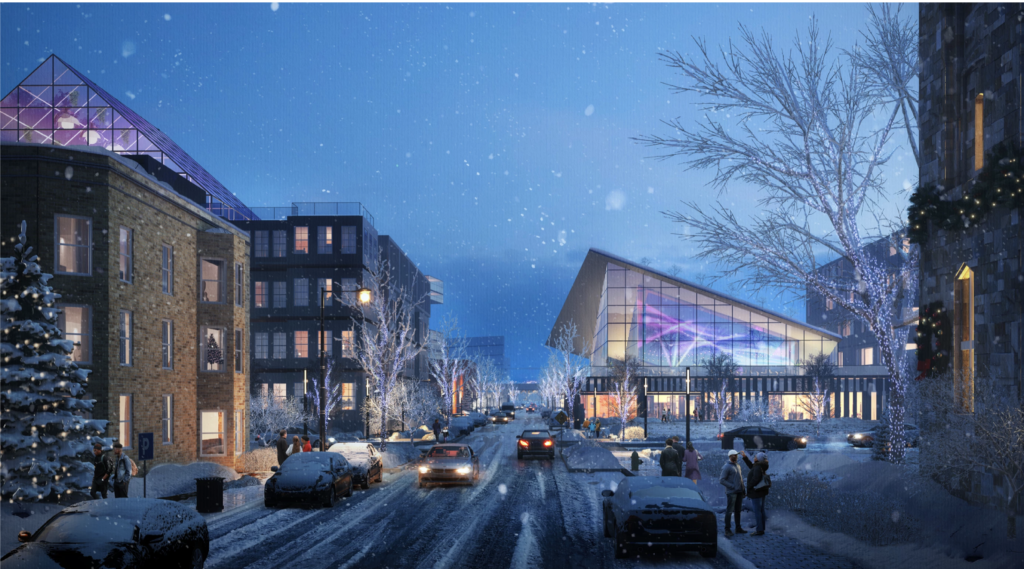 Block E – South of 64th Street, this lot will hold an angular building with a central atrium which will contain a 21,500 square-foot performance venue consisting of a 200-seat black box theater and two 20-seat theaters. 40 residential loft-style units will also be built here along with tuck-under parking.

Block G – Furthest west, the lot is north of 64th Street and will contain a 530,000 square-foot vertical greenhouse, similar to the recently funded Vertical Harvest in Pullman, and 56 residential units. 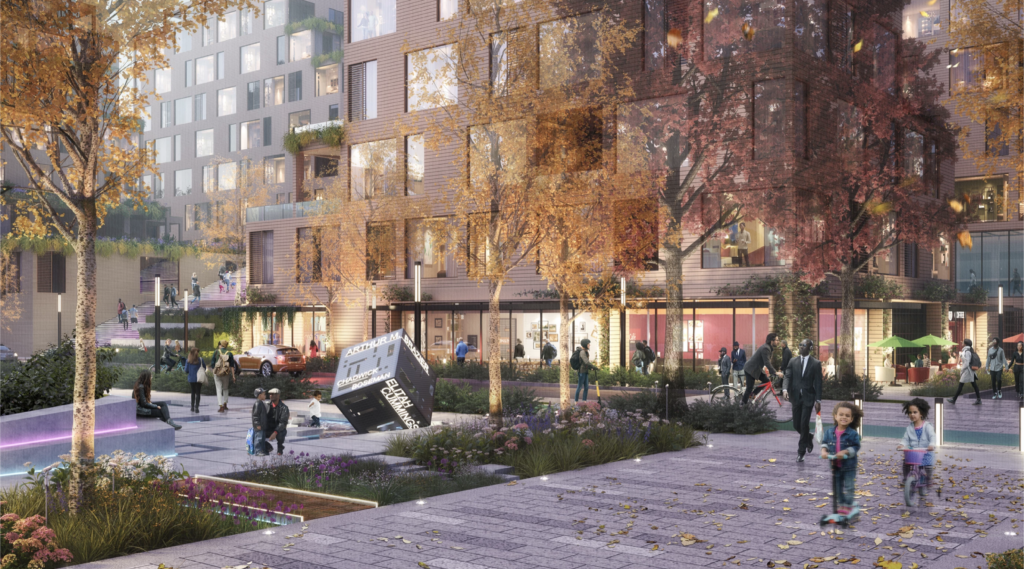 Block F+H – will be directly west of the church and hold a large consolidated parking garage with 810-spaces for church-goers and adjacent residential units along with 38 of its own units. This will be anchored by a 12,500 square-feet of ground floor retail and a large rooftop agriculture space.

Block I – Directly west of Block A, the small lot will contain 80 residential units, 7,500 square-feet of ground floor retail, and a parking structure as well. 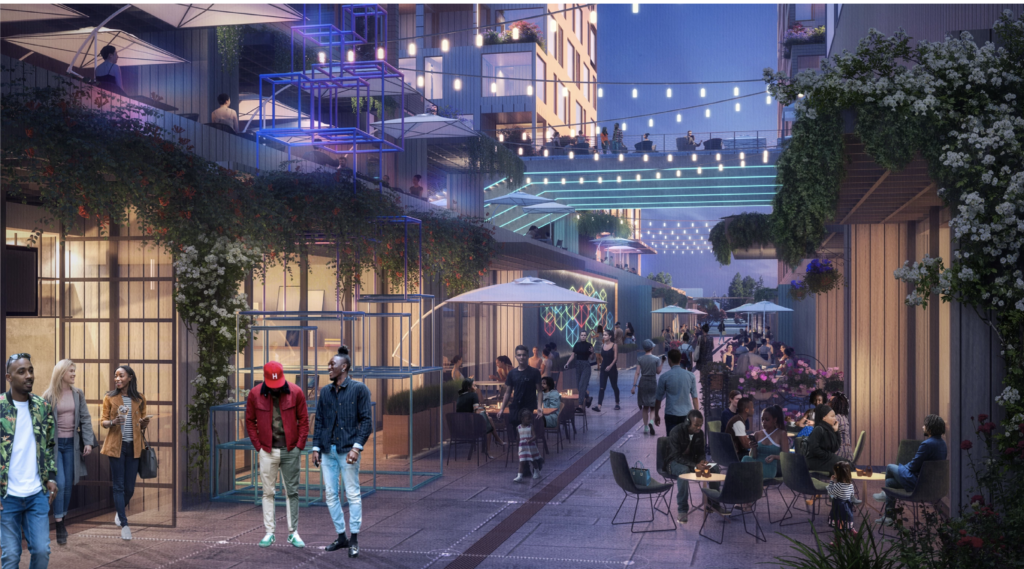 In total, 870 residential units, 215,000 square-feet of commercial and retail space, and plenty of parking for all of those involved will be built. It is worth noting a hotel chain has already been selected for the project and will be revealed in the coming month, and that while no final numbers have been revealed at least 30-percent of the units will need to be affordable per local ordinance. Metra has also not confirmed any formal plans or talks about the use and remodeling of the existing platform and station at 63rd street. 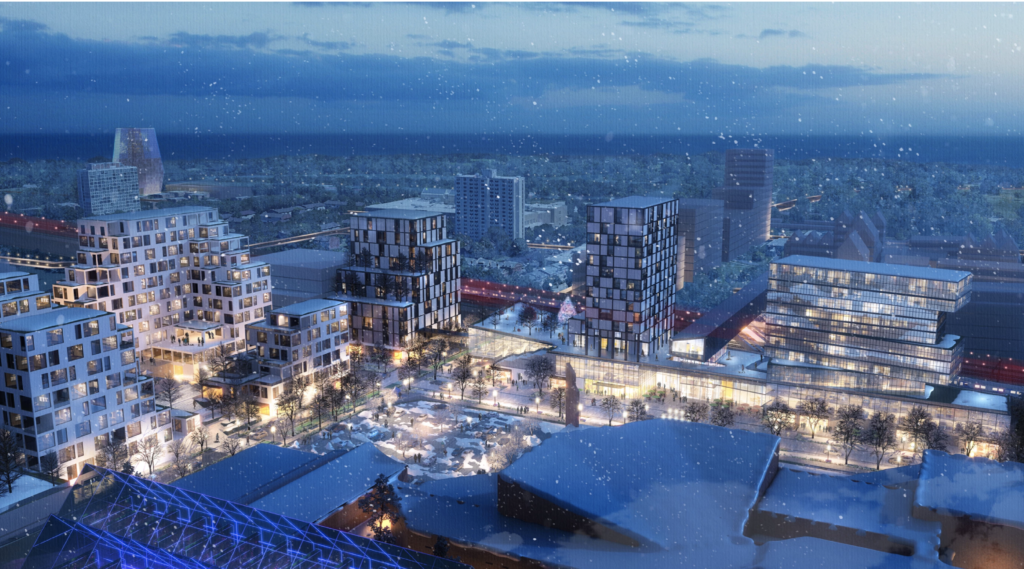 Plans for the district are to create one of the nation’s first sustainable, equitable, and transit-oriented urban places that prioritizes development without the displacement of the area’s distinctive cultures, textures and traditions. Integrating arts, culture, agriculture, and mobility into the initial plan, the equity driven design will prioritize established and emerging Black entrepreneurs as 80-percent of the population of Woodlawn is Black. 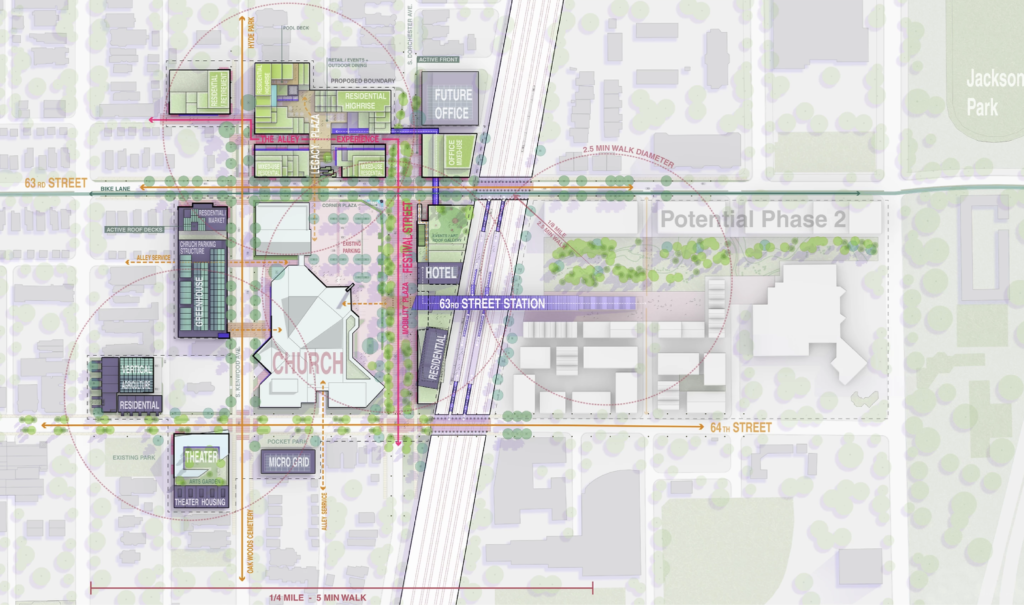 The project will require between $300-600 million to complete and will utilize modular construction by New-York based Full Stack Modular in order to achieve the developers aggressive timeline. Hoping to break ground in 2023, a nearly complete build-out is planned for only three-years later in 2026, with a future second phase on the other side of the Metra tracks being a possibility dependent on the performance of this first phase.

10 Comments on "Plans Unveiled For New Mega-Development In Woodlawn"