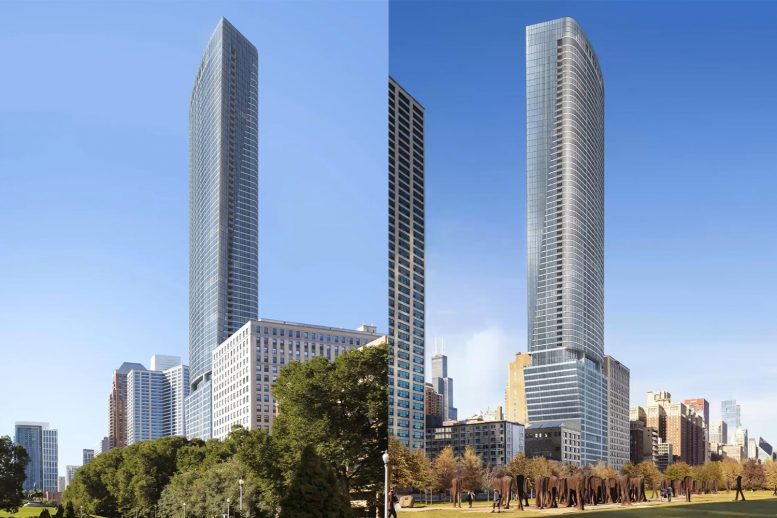 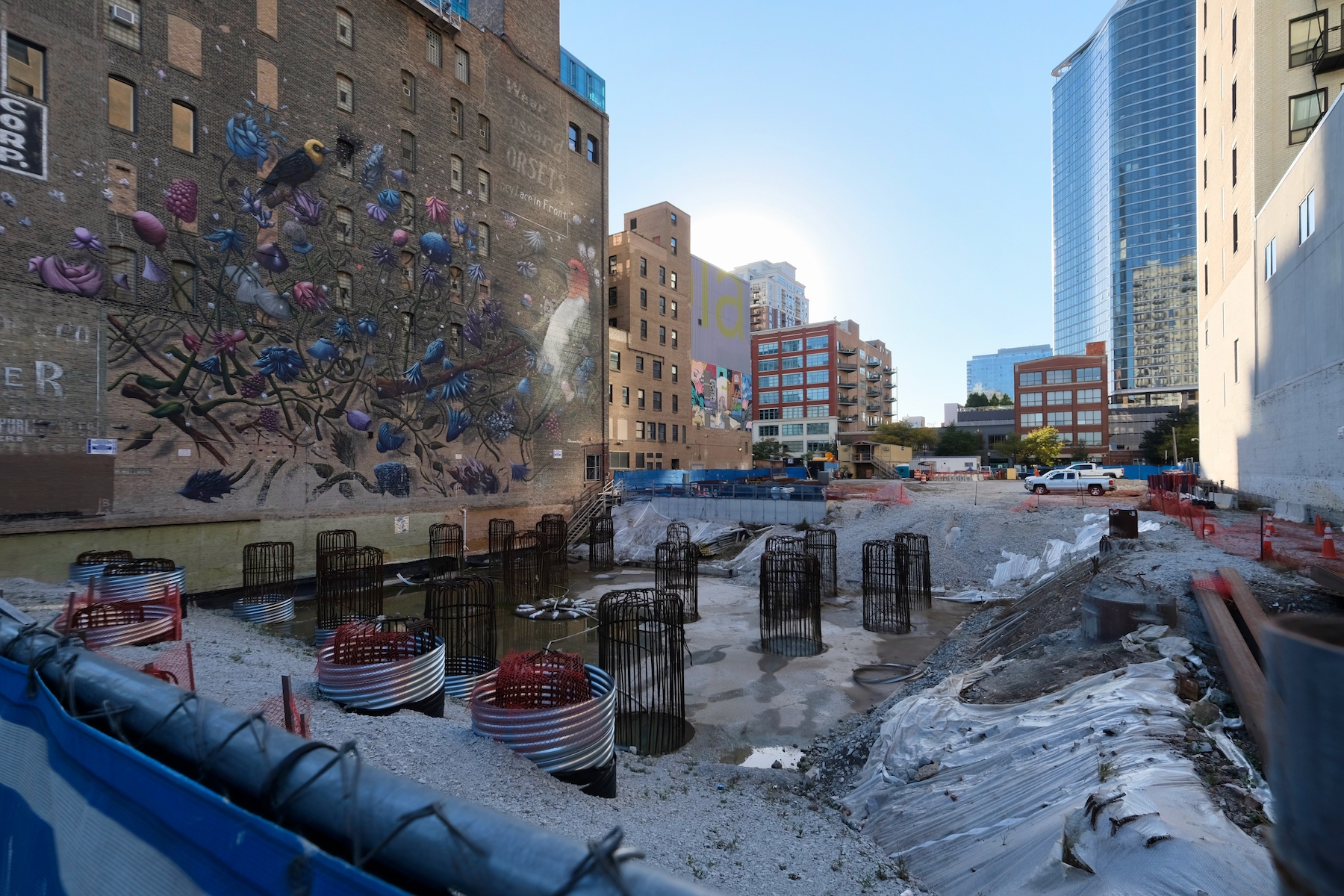 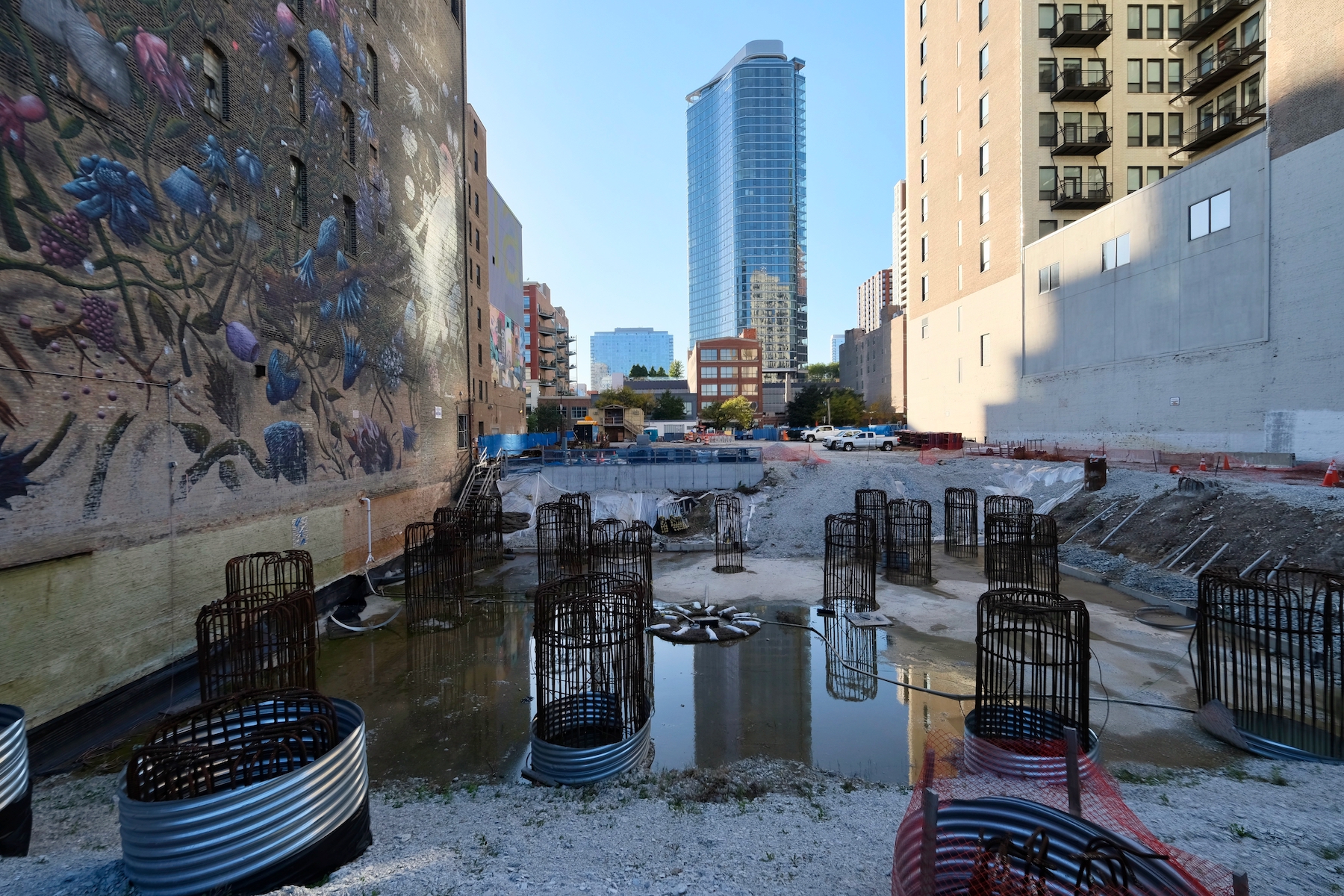 Plans initially called for 506 condominium units, with construction having kicked off in late 2019. Progress had been made up to the caisson stage, prior to work halting around the middle of last year. The pause resulted due to withheld financing, which was in line with the terms of the agreement. This hiatus allowed the developers to pivot to apartments instead condos, taking advantage in the recent rental market surge. In June of this year, the Chicago Plan Commission approved a revised design that would replace the planned 506 condos with 738 rental units. The revision also resulted in a slight height cut from 831 feet to 805 feet. 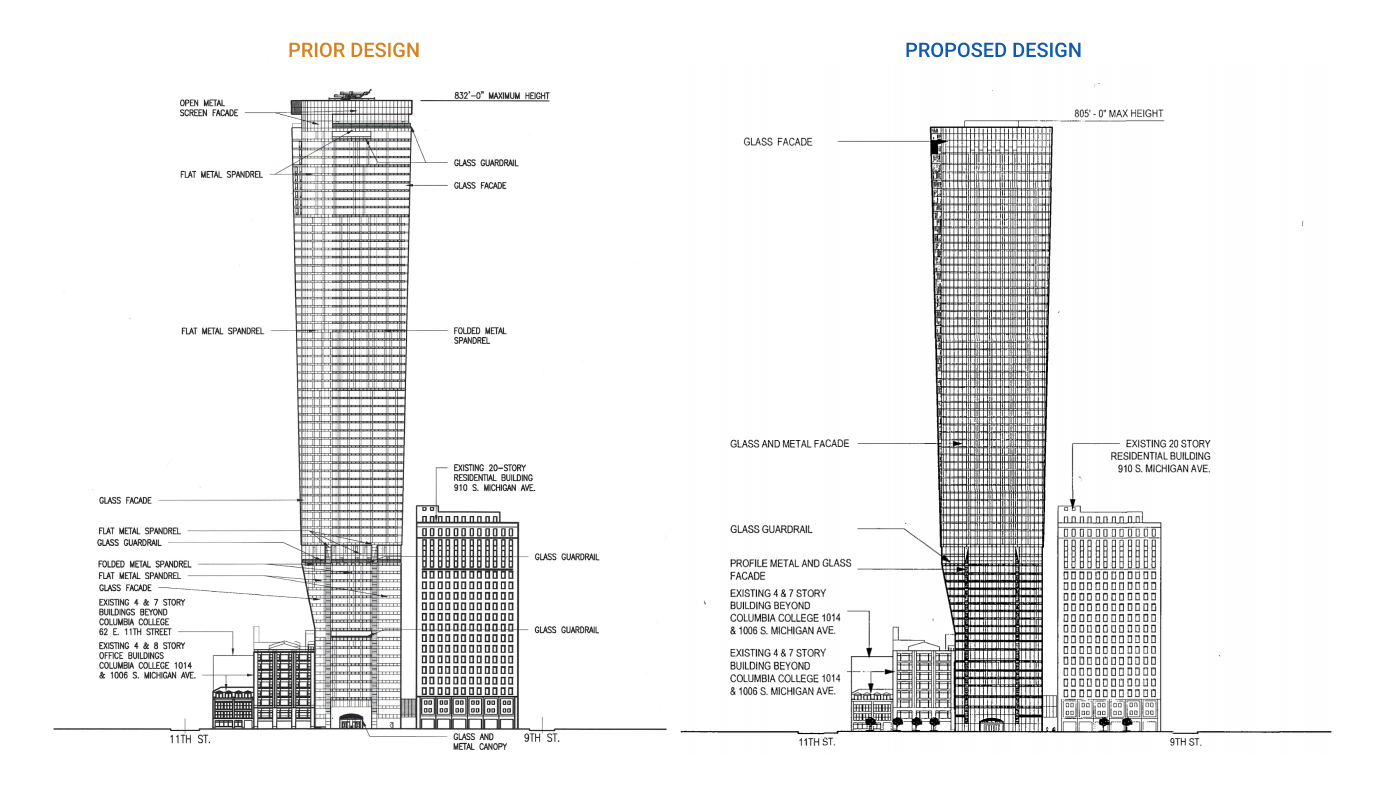 The latest design involves a rectangular podium topped by the slender tower portion that tapers outward as it rises. This massing will be enveloped in a glass and metal facade. Between the prior iteration and the revised iteration, the architecture of 1000M will remain largely the same. Notable exceptions include the elimination of a cap-like volume at the top that included a sky terrace, as well as a more streamlined facade pattern. 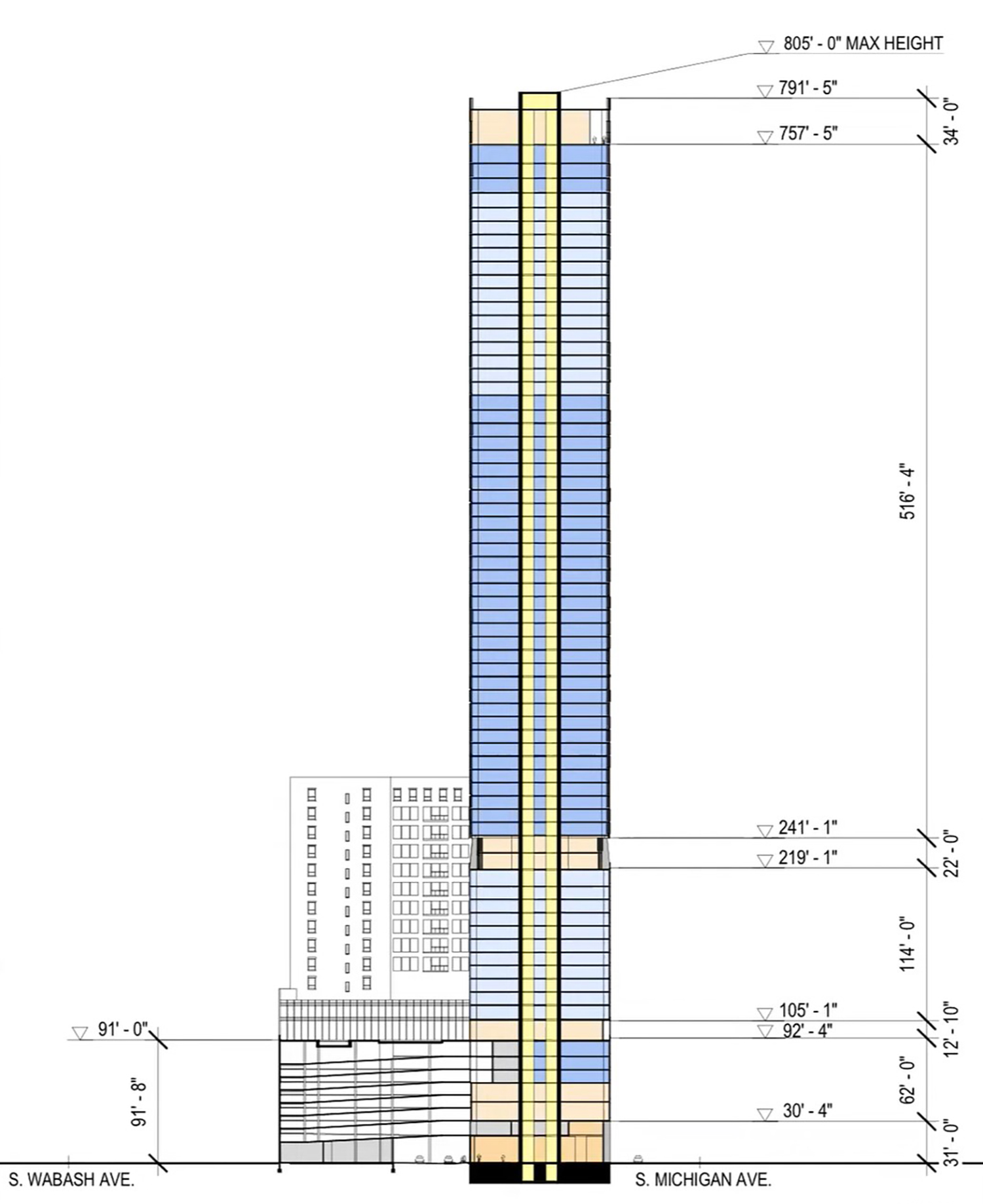 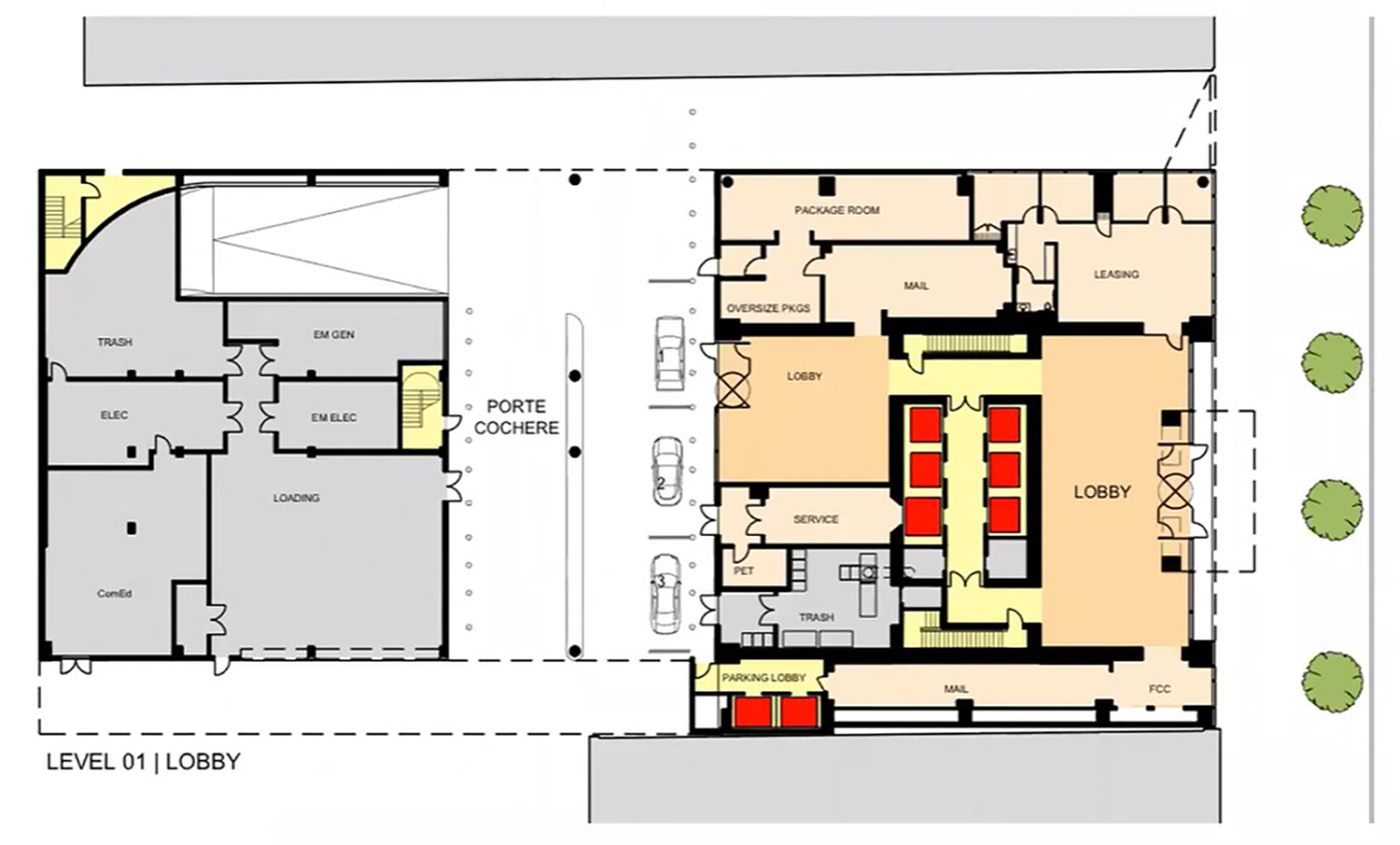 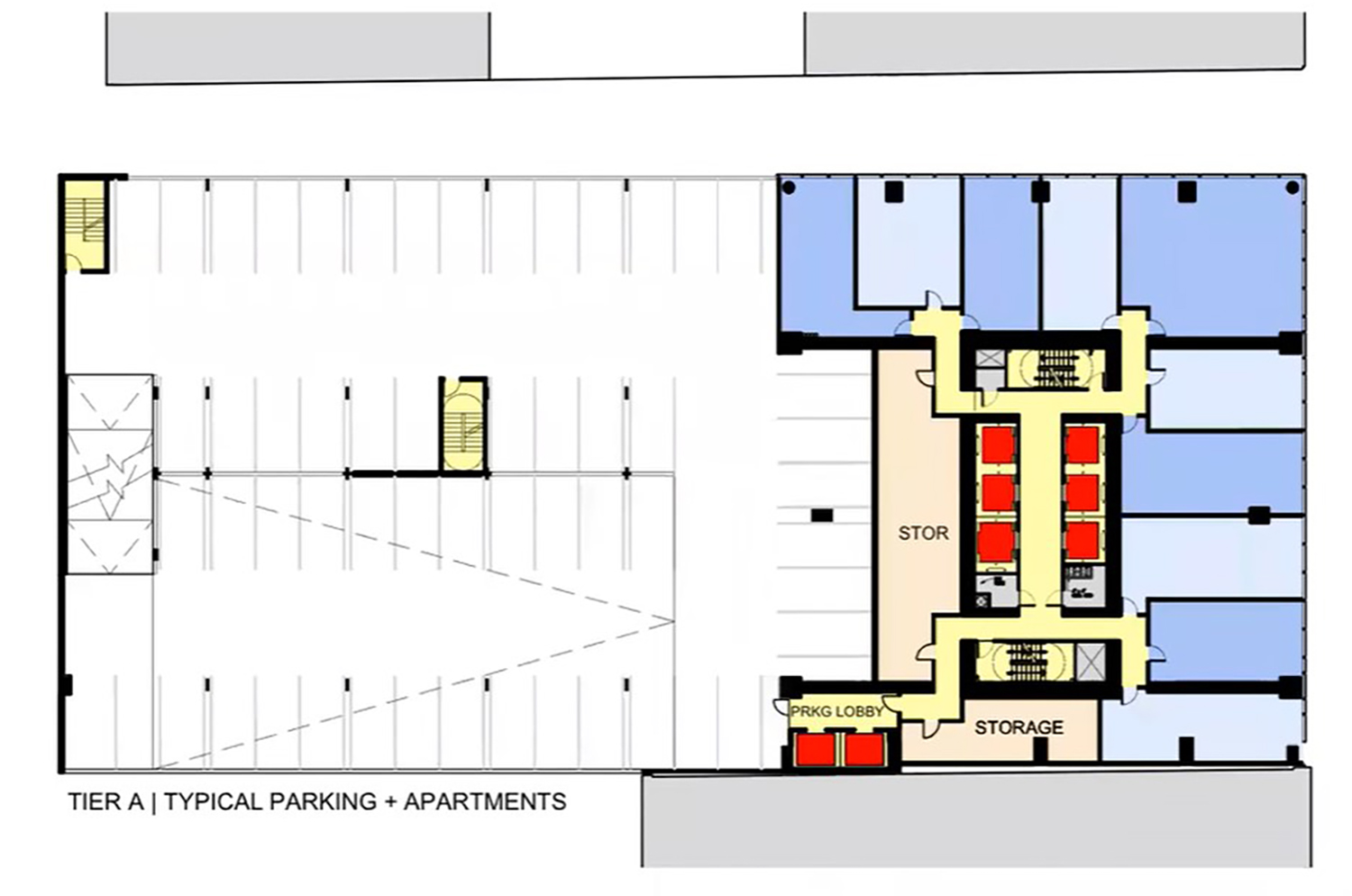 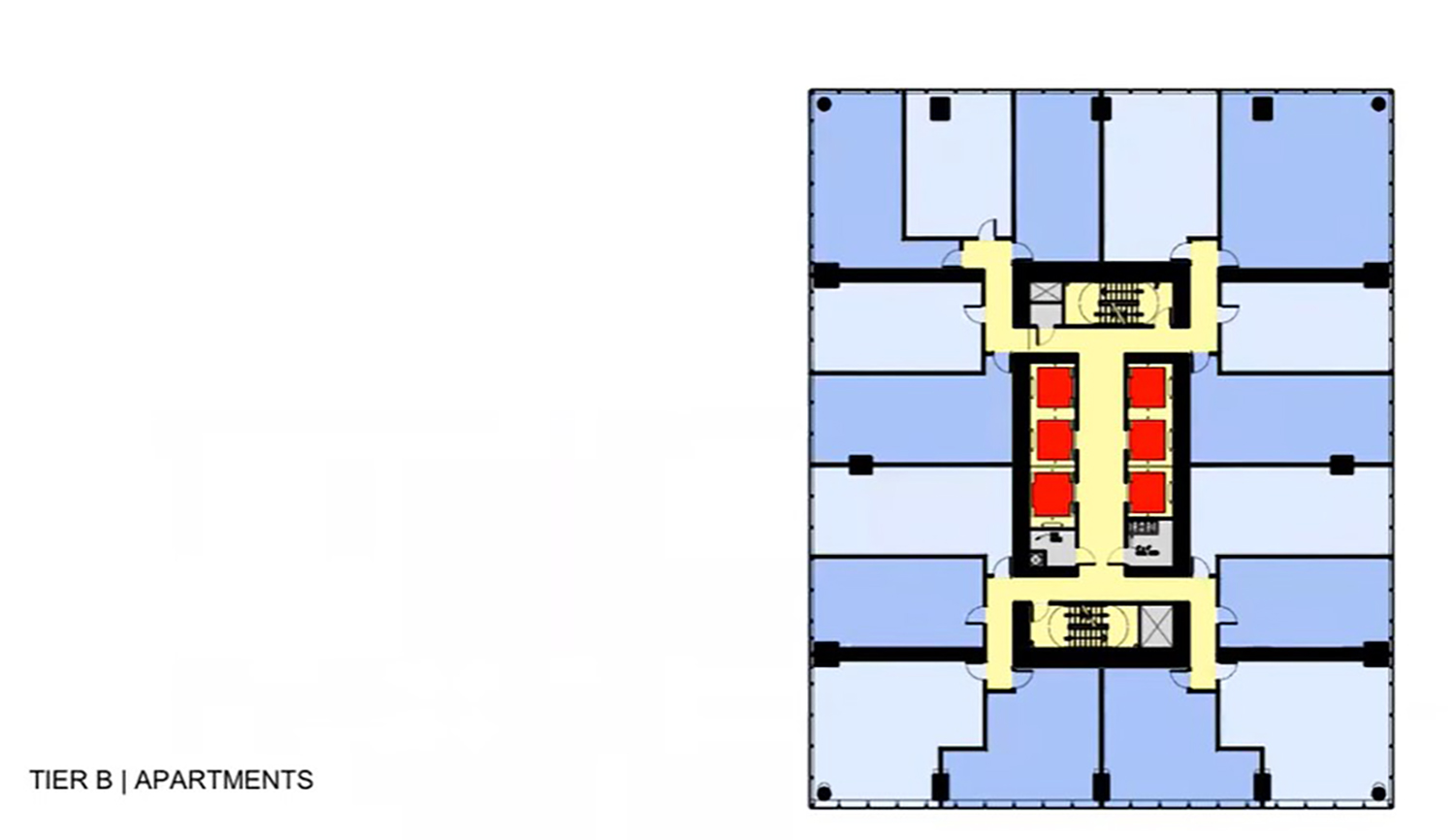 The scope of the apartments involves four tiers, lettered from A through D. Tiers A and B will be housed within the podium section. Tier B units will be stacked atop the tier A units, and will be separated by a 50,000-square-foot eighth floor amenity deck. This deck will be available to all residents, and will include an outdoor pool deck along with various indoor amenities. 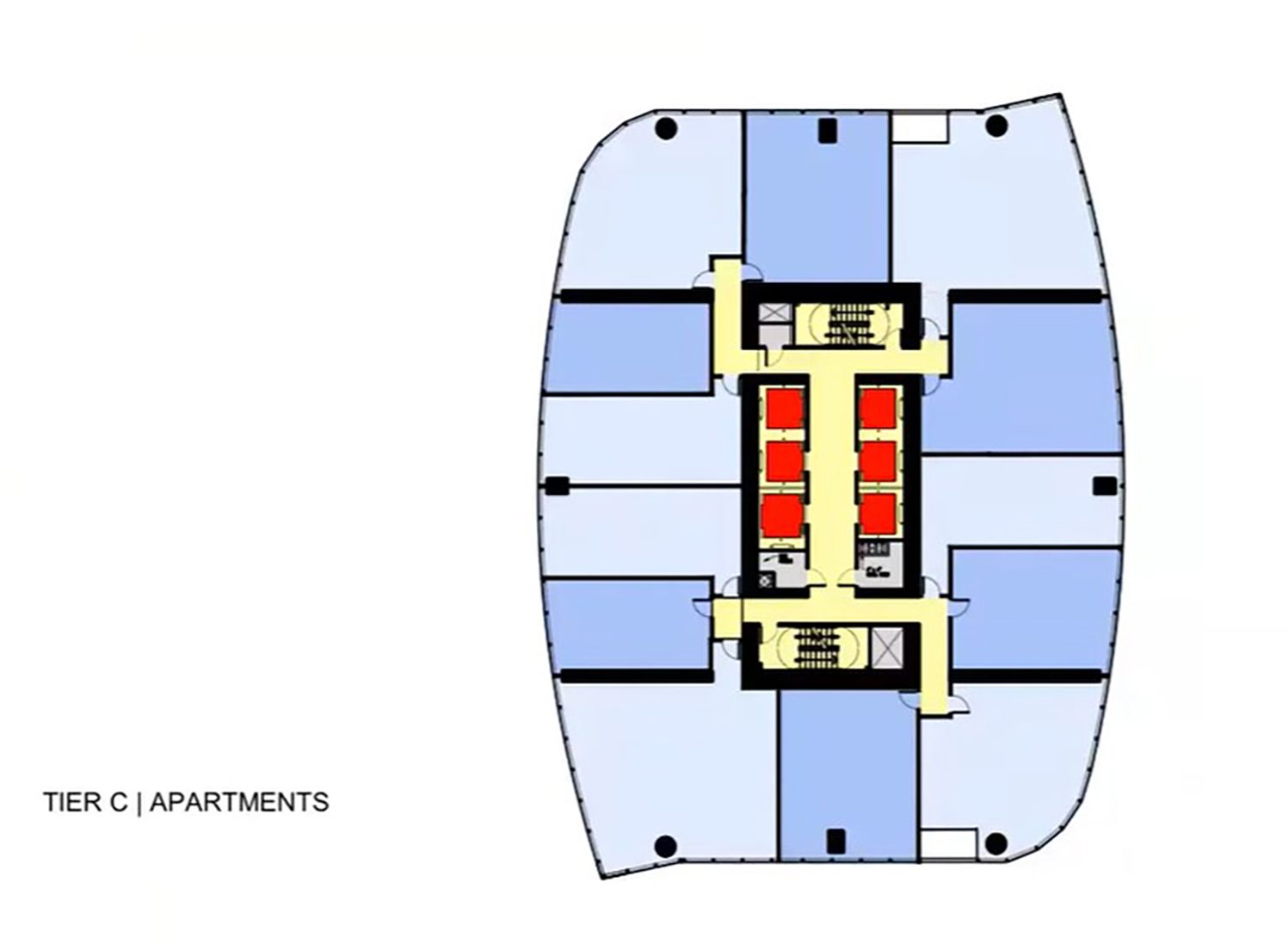 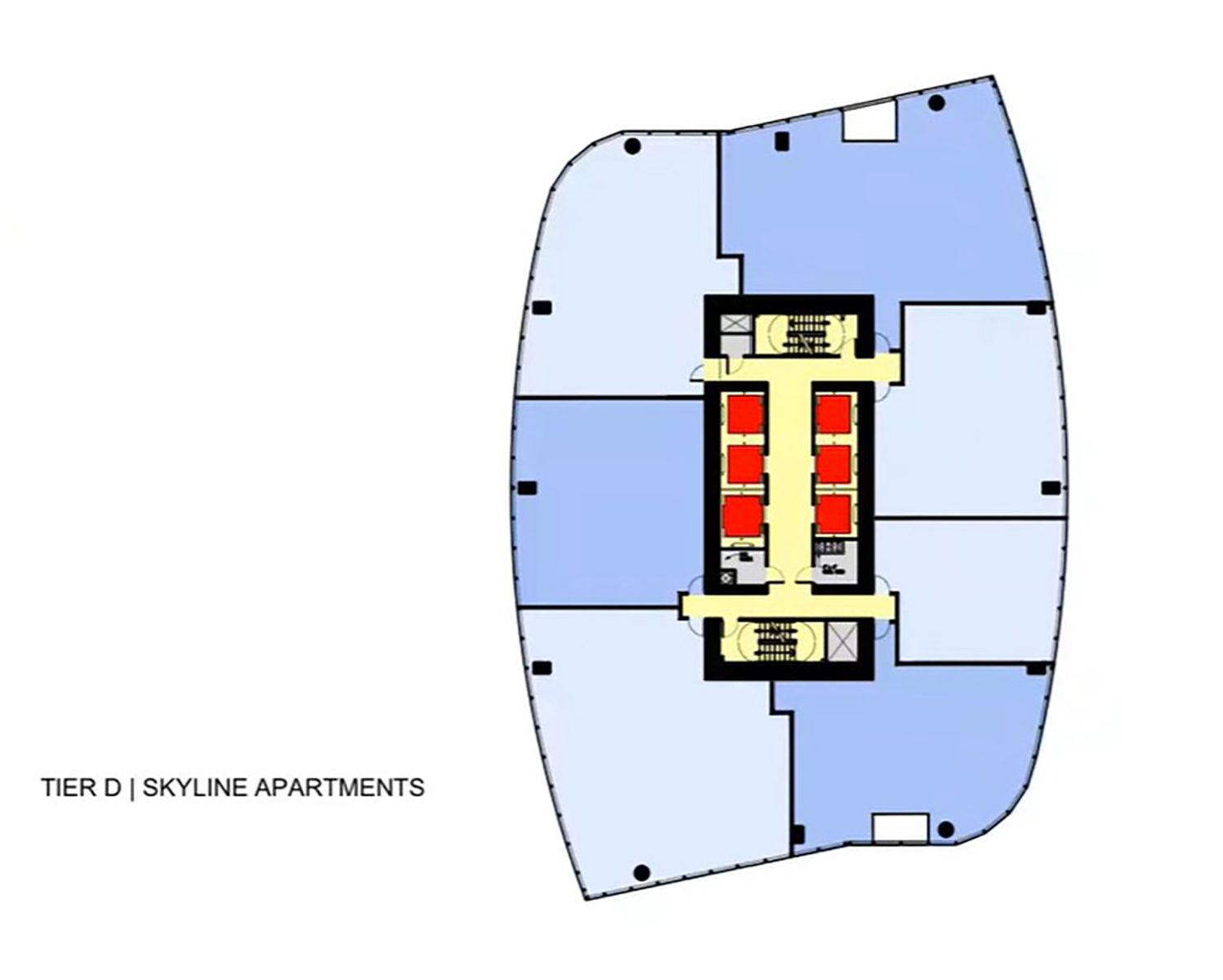 The remaining Tier C and Tier D will be housed within the main tower volume. Tier C will be in the lower section of the volume, directly above Tier B. Tier D, known as Skyline Apartments, will occupy the top floors, with penthouse units spanning upward to 3,000 square feet. 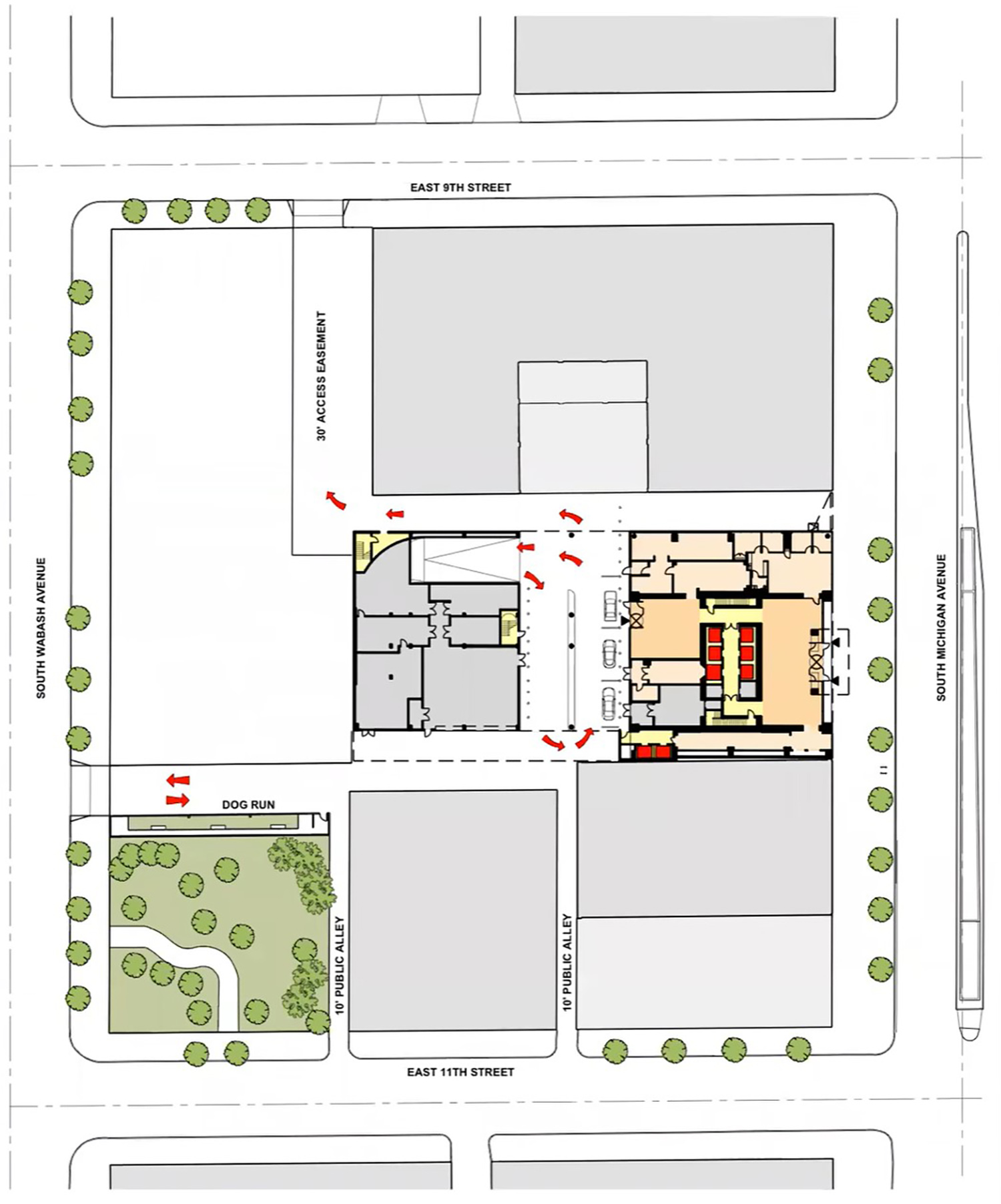 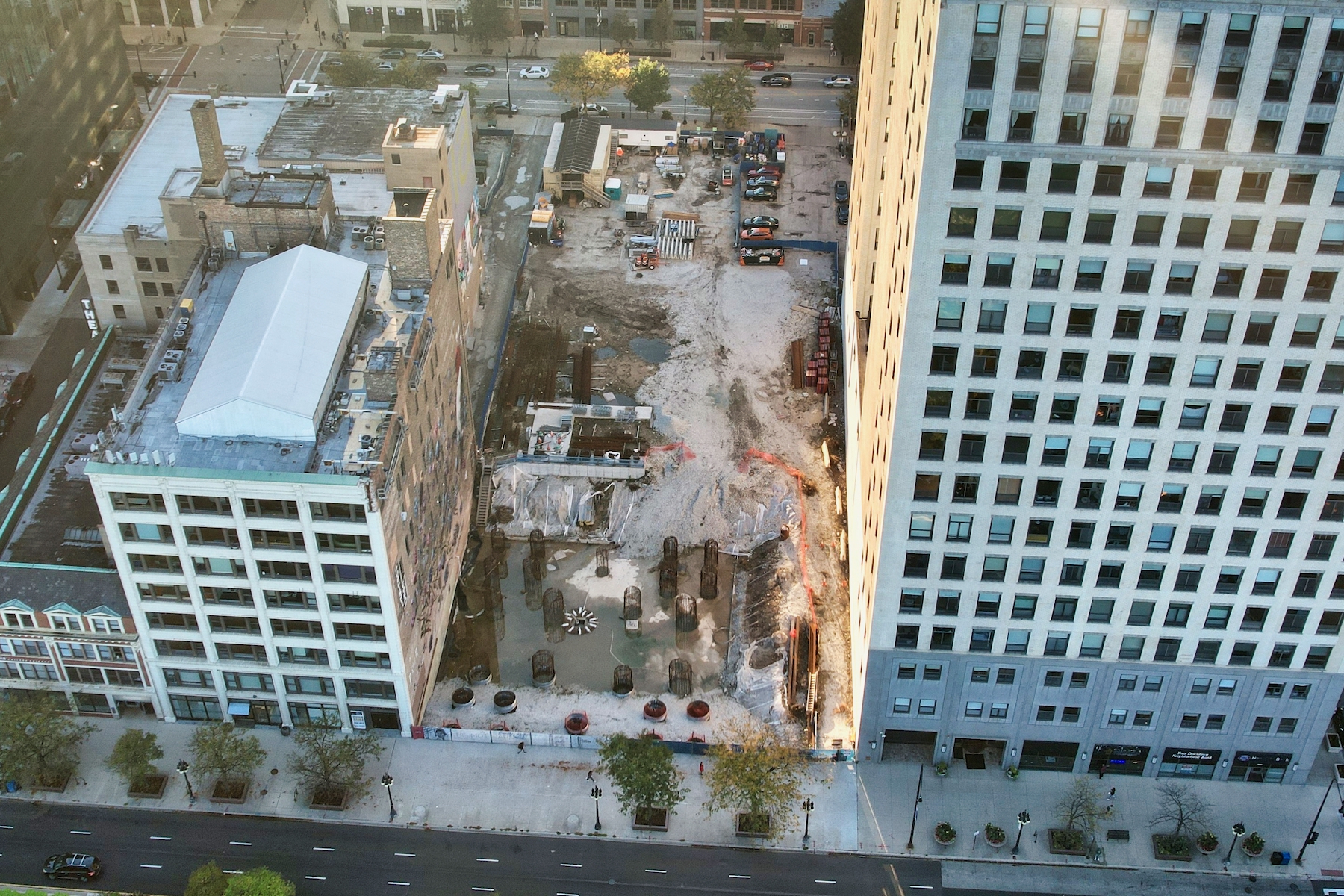 With McHugh Construction serving as general contractor, the current phase of construction listed under the new permit is expected to cost $1 million. The work listed mainly involves changes to the foundation and its infrastructure. These changes include revisions to the shear wall and core wall, revised elevator pit dimensions, adjusted pipe routes, new parking elevator pits, modified column spacing within the garage, modified storage tank dimensions, a modified gas line, new grade beams at the garage, and modified mat slabs for the garage. No other permits have yet been filed or issued, most recent reports indicate a target completion date for 2024.