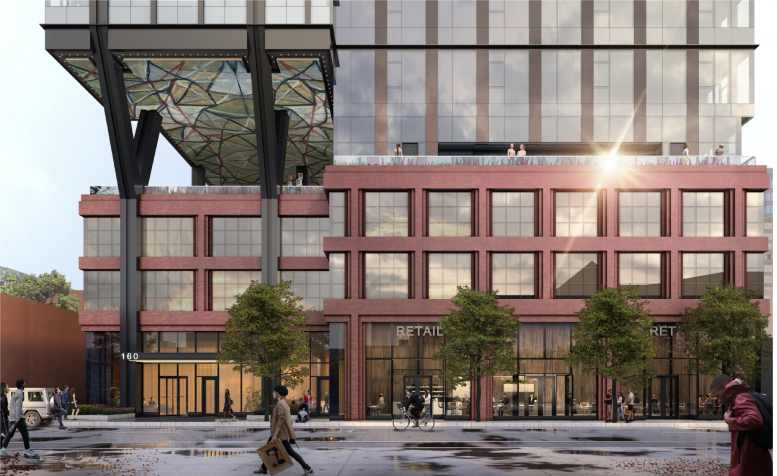 The Chicago Plan Commission has approved a mixed-use development at 160 N Morgan Street in the West Loop. Slightly revised plans for the bKL Architecture-designed residential high-rise were presented by developer Sterling Bay as they continue to build up the former meat packing industrial area. Facing N Morgan street, the site which once held a drive-thru bank turned Gucci store pop-up, will give residents direct access to restaurant row, the CTA Green Line, and next door Federales bar. 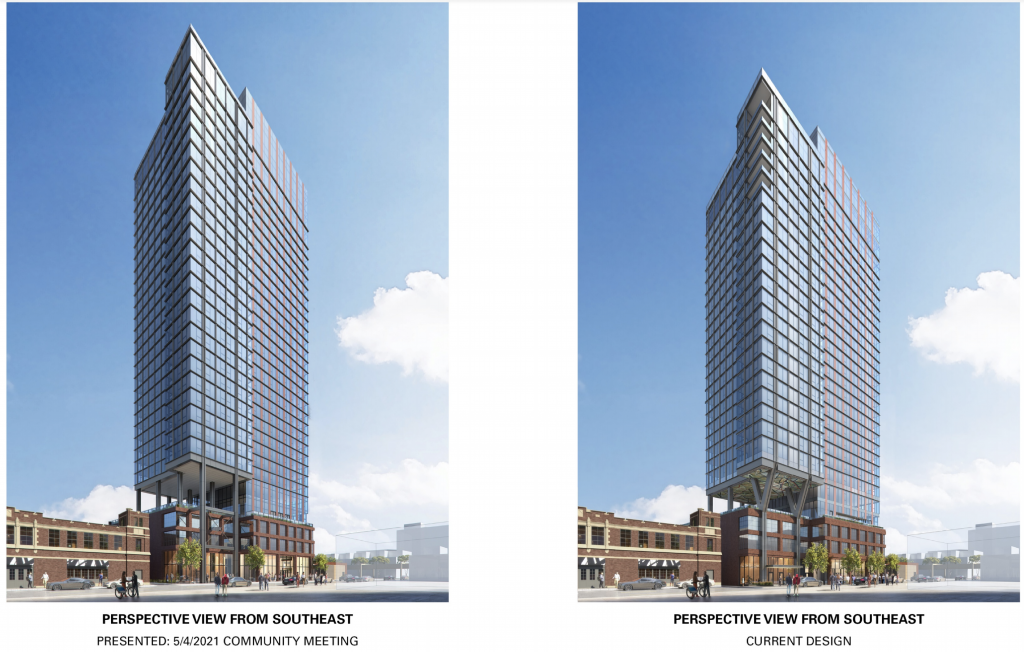 The revised building now stands 29 stories tall and tops out at 350 feet compared to its first iteration which was presented at 33 stories and 380 feet tall. The height cut also came with a reduction in units, from 320 to 282 that will be split mostly into convertible, studio, and one-bedroom apartments, with a few two- and three-bedroom apartments available as well. With the design revision, a handful of balconies have been added towards the upper floors for a select few apartments to enjoy. 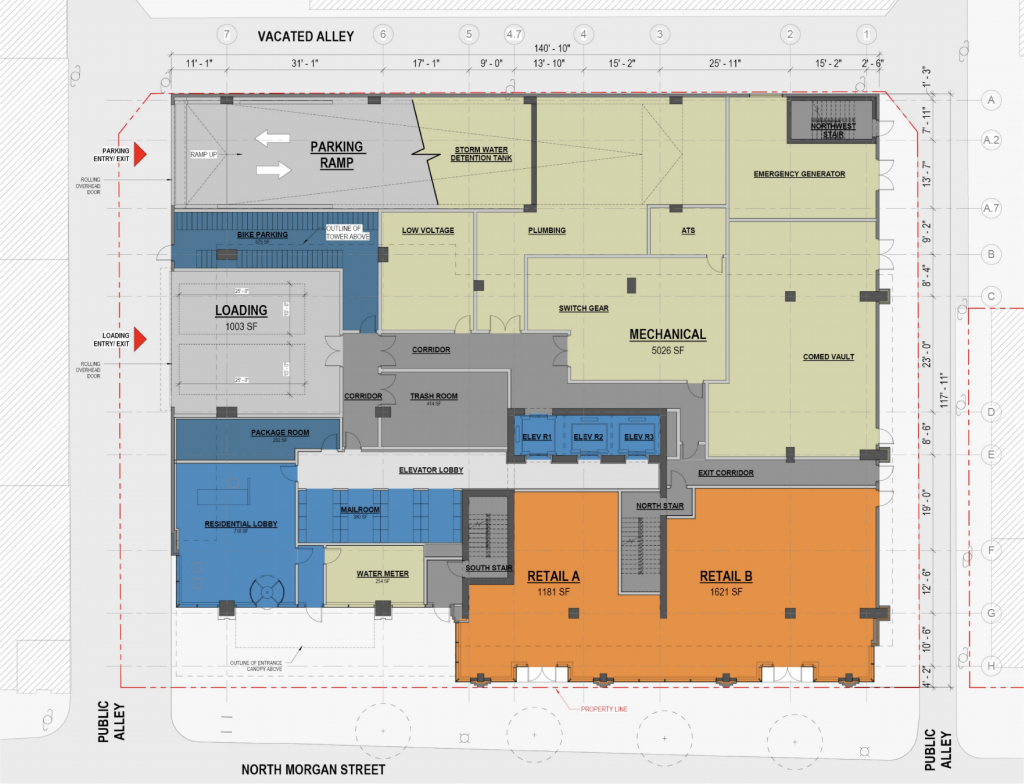 The ground floor will have an inset tenant entry with the lobby and 2,800 square feet of retail space providing an active street front for the project. A public side alley will be used for access to the bike parking room and upper parking levels which will provide 89 vehicle spaces even with its proximity to transit. Future tenants of the building will be able to utilize amenities which include an outdoor dog run with an indoor owner’s lounge, a resident lounge with a demo kitchen, co-working space, gym, outdoor pool, and various outdoor terraces. 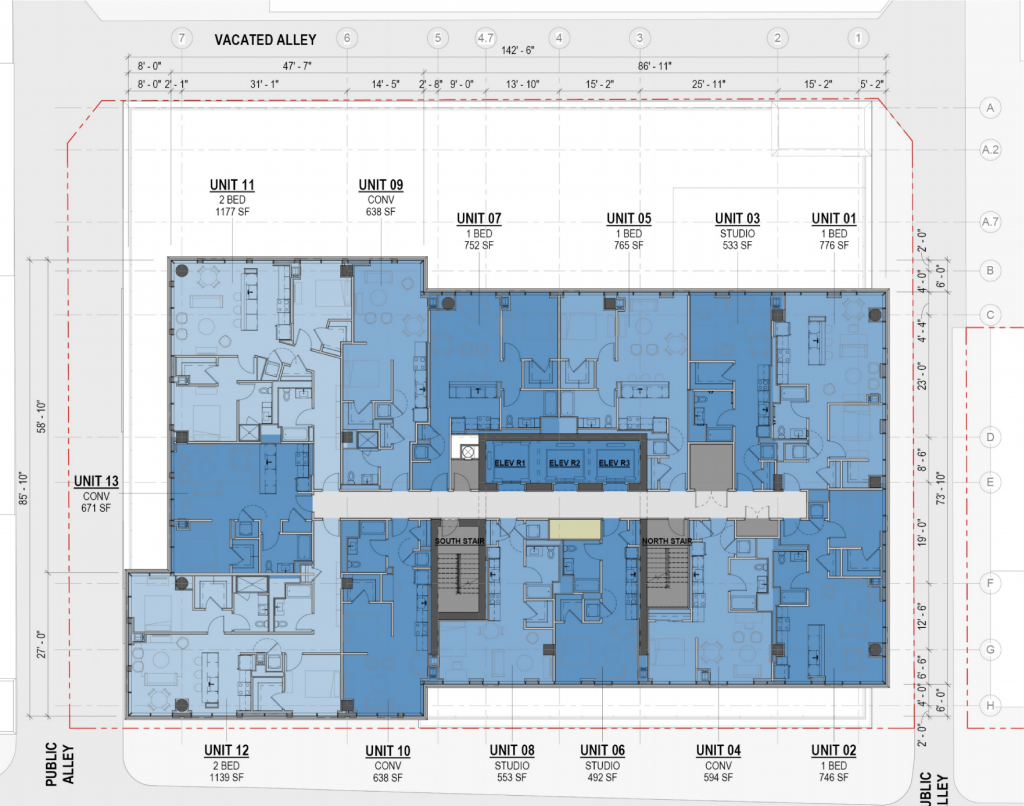 Ten percent, or 28 total, of the building’s apartments will be on-site affordable units, these will be split into nine convertible, six studio, eight one-bedroom, four two-bedroom, and one three-bedroom apartments. To cover the remaining 10 percent needed to meet the minimum, Sterling Bay will pay $5.2 million to build out 28 affordable and 16 market-rate units in the SL Solar Lofts at 2548 S Federal Street in the South Loop. To receive the Floor Area Ratio (FAR) desired for the development, they will also pay $1.9 million to the neighborhood opportunity fund. 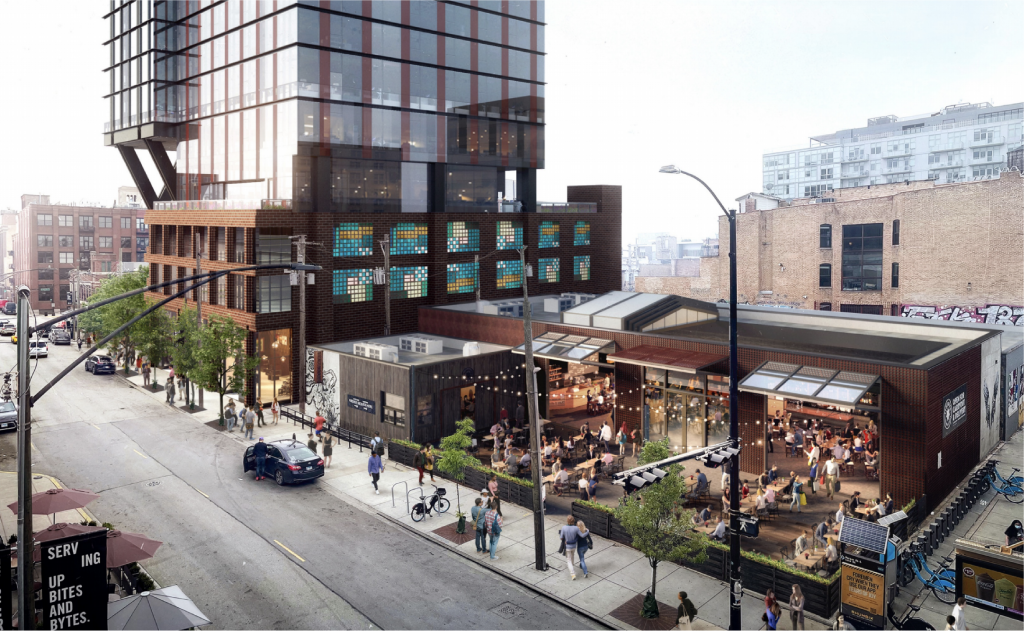 Much of the building’s exterior remains the same as the previous iteration, the most notable change being the tying of the two base level columns into a single Y shaped column to remove the obstructions from the sidewalk. More art has been incorporated into the design including the north podium facade that will be visible from Federales next door, and under the large outdoor terrace on the fifth floor. Facade materials will feature modular brick, burnished concrete blocks, painted aluminum, and gray-, blue-, and red-tinted spandrel glass.

160 N Morgan Street joins a variety of residential projects planning to go up in the West Loop including 906 W Randolph Street which broke ground recently. With this approval the project will now need to clear with the Committee on Zoning its Neighborhood Commercial to Downtown Mixed-Use rezoning before moving to the City Council. No ground breaking timeline was given but it is expected to take around 24 months to complete once started.