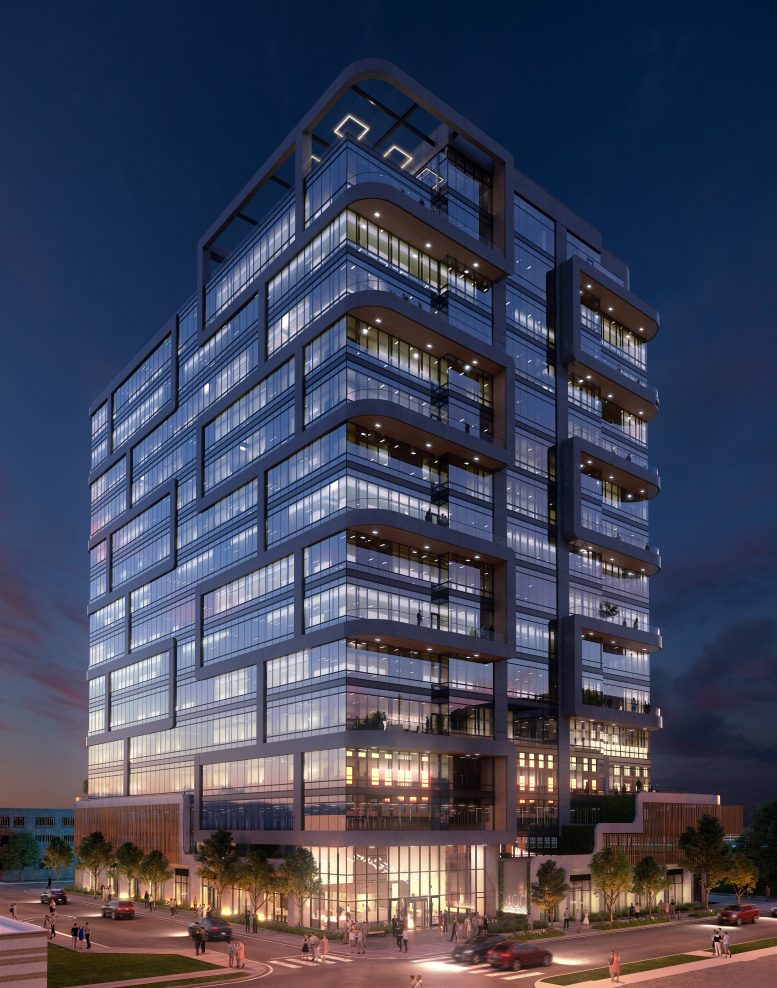 Glass installation has wrapped up for Trammell Crow Company‘s 16-story Fulton Labs at 400 N Aberdeen Street in Fulton Market. Developed in partnership with Zoë Life Sciences, the new 275-foot-tall edifice will serve as the second addition to the West Loop biotechnology campus known as Fulton Labs. 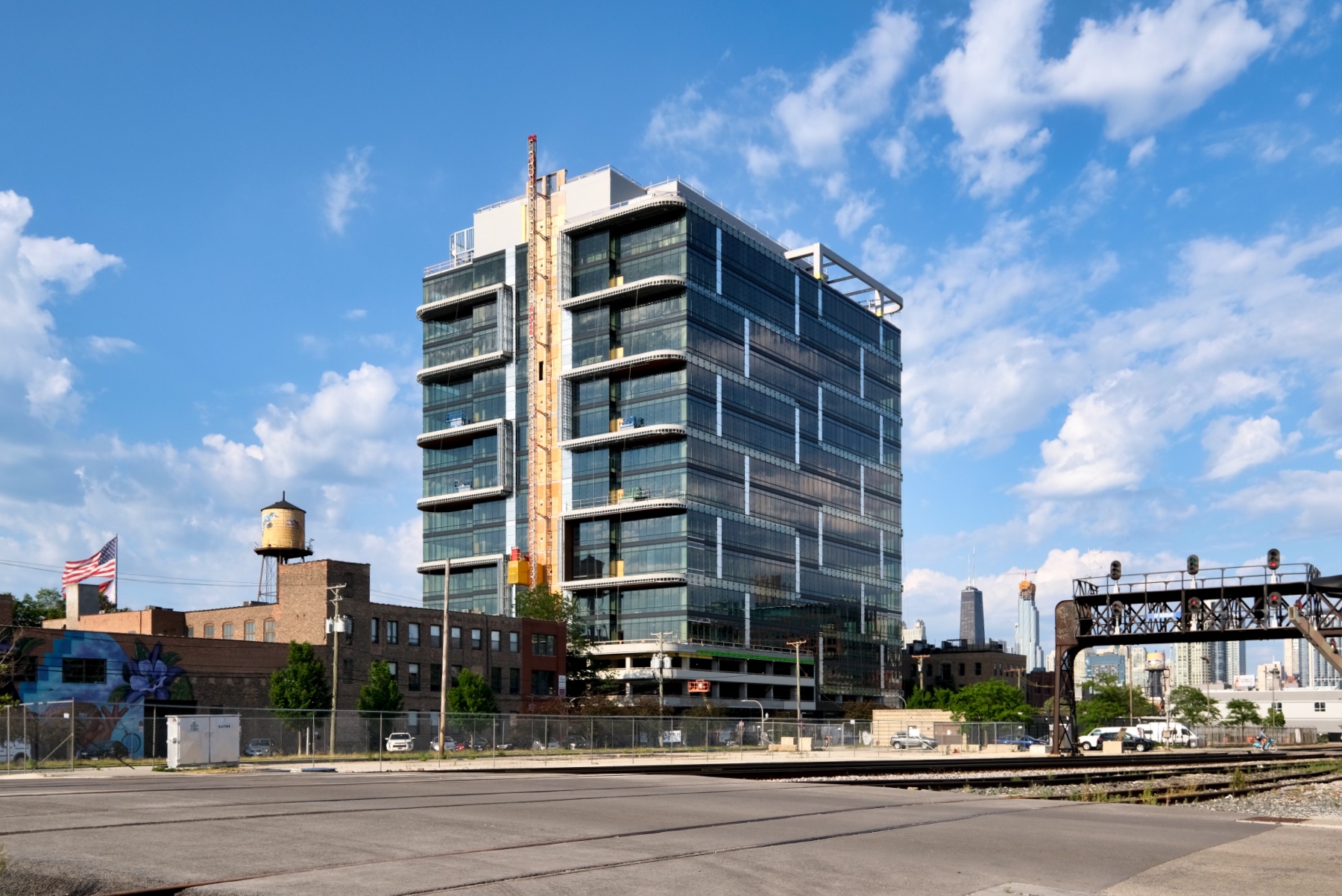 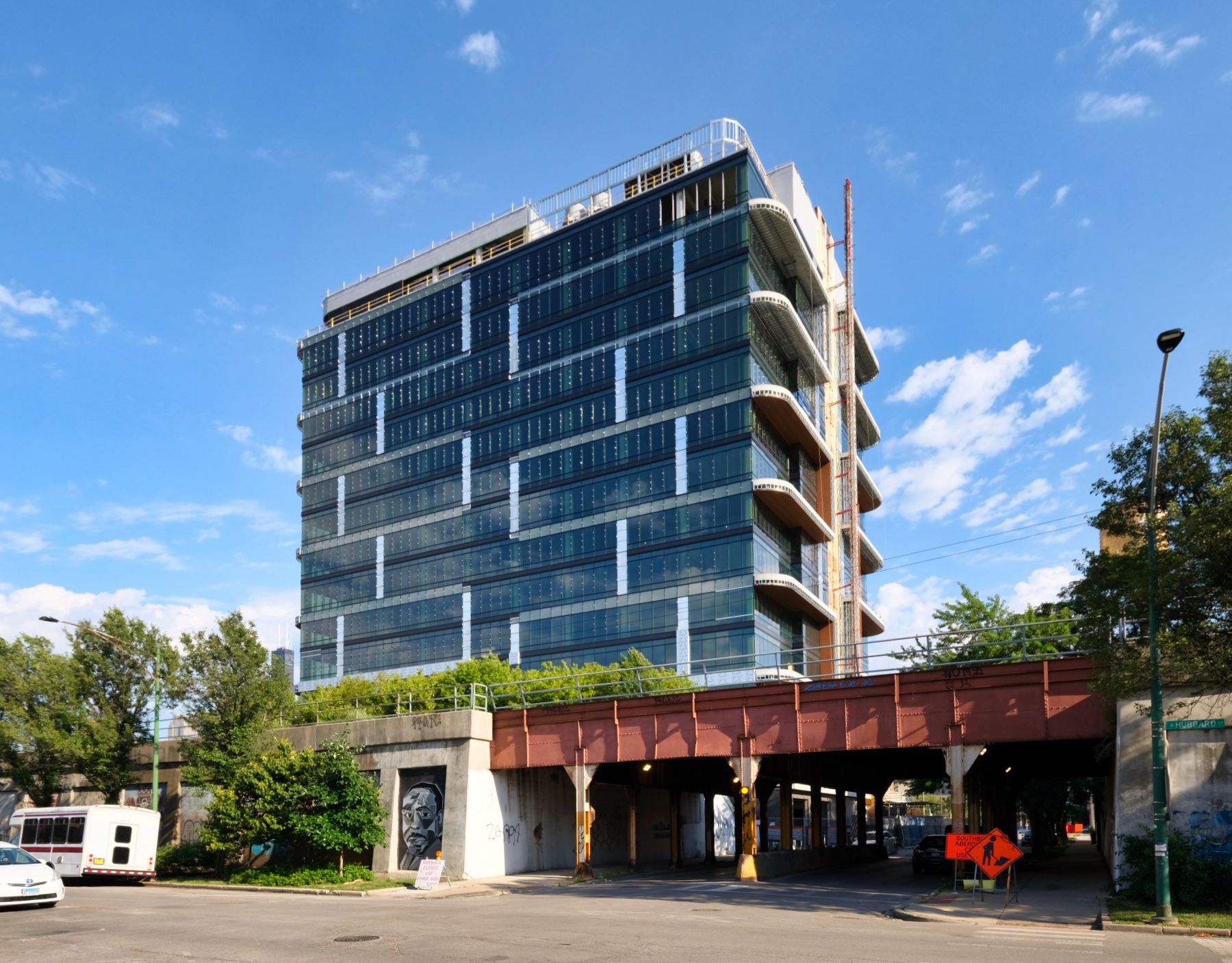 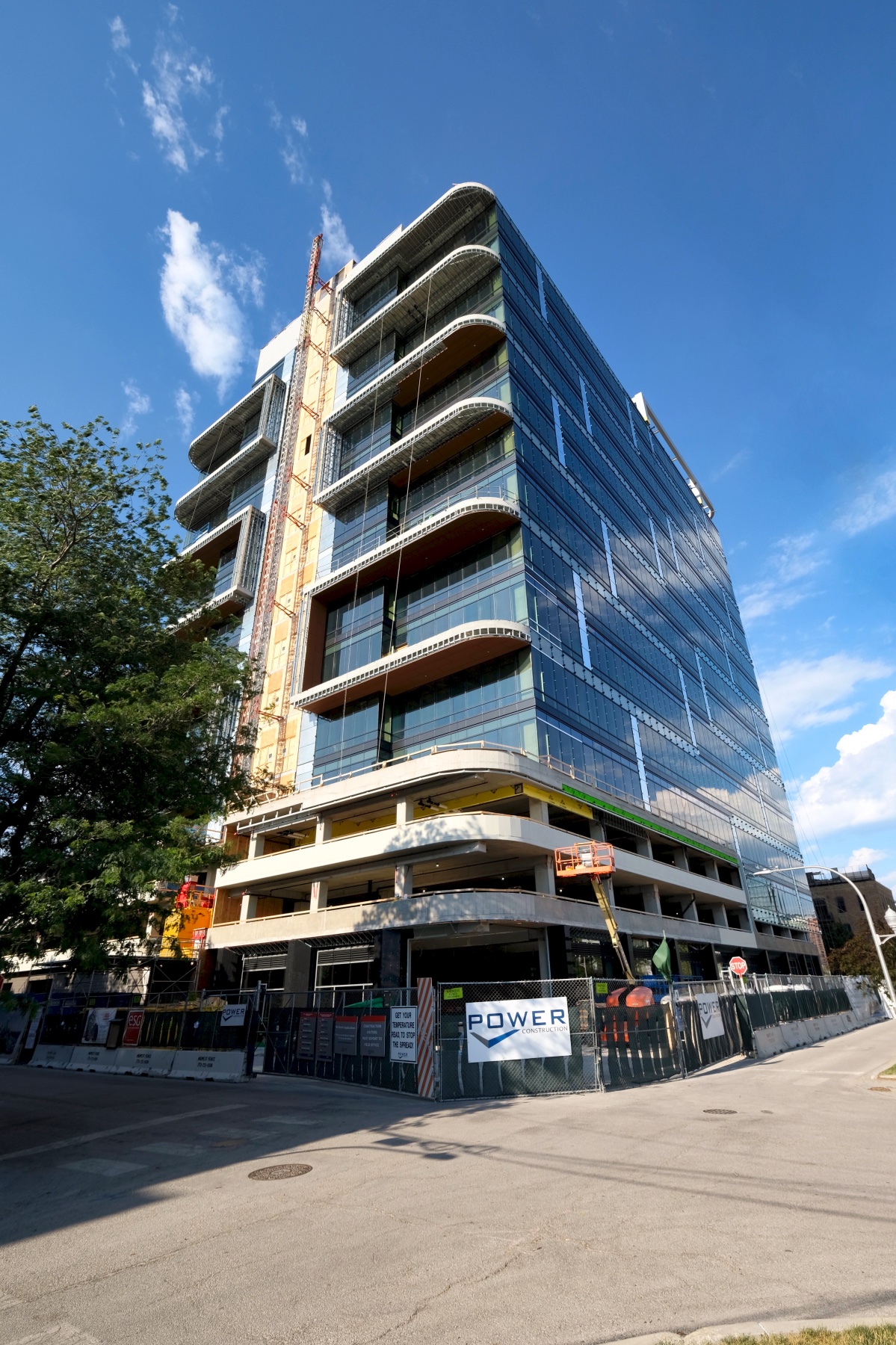 Following the first phase’s office tower at 1375 W Fulton, the second phase will house roughly 420,000 square feet of programming. This programming will offer a mix of office and lab space for bioscience and biotechnology companies, as well as additional retail, amenity, and infrastructure space. 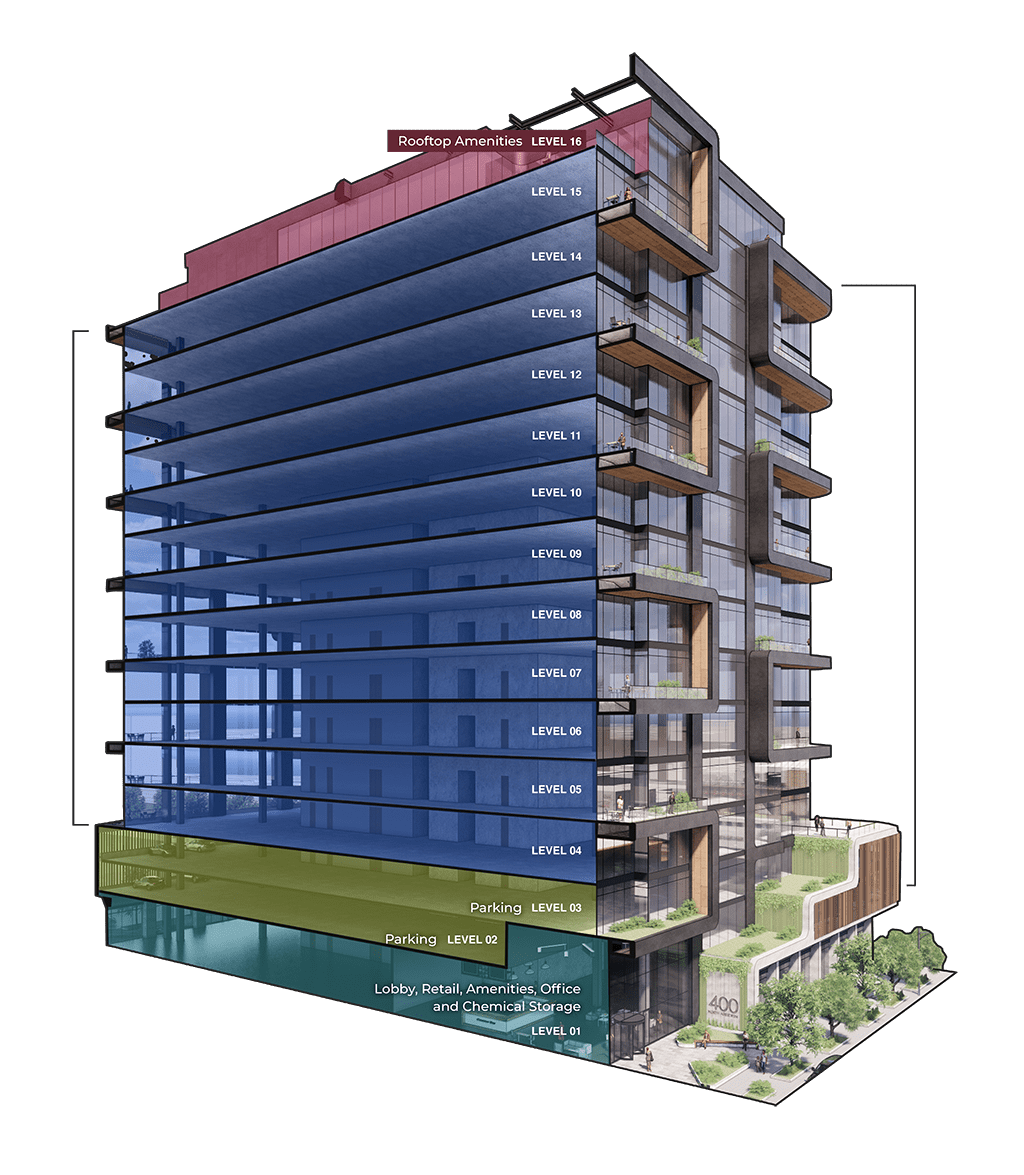 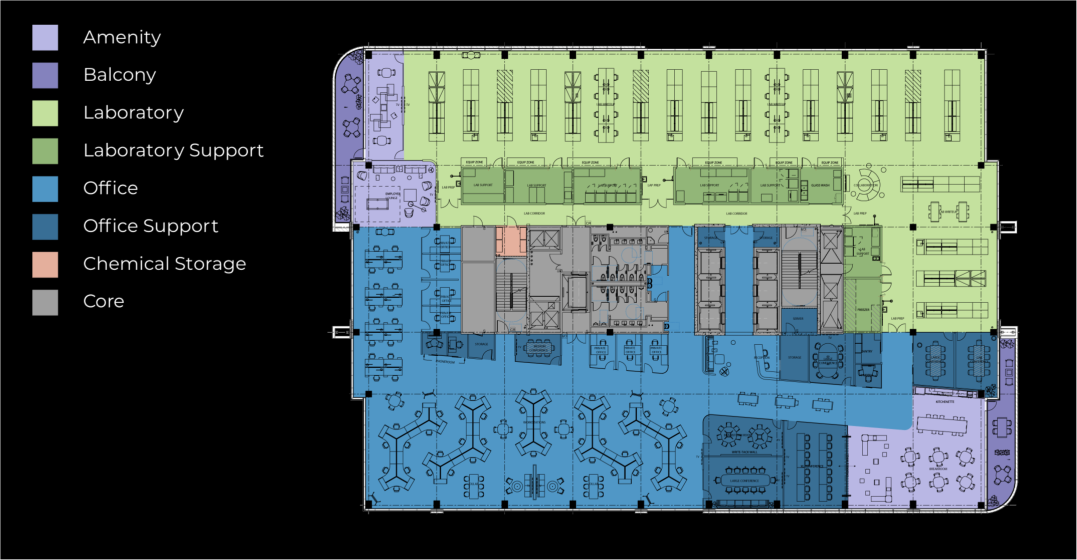 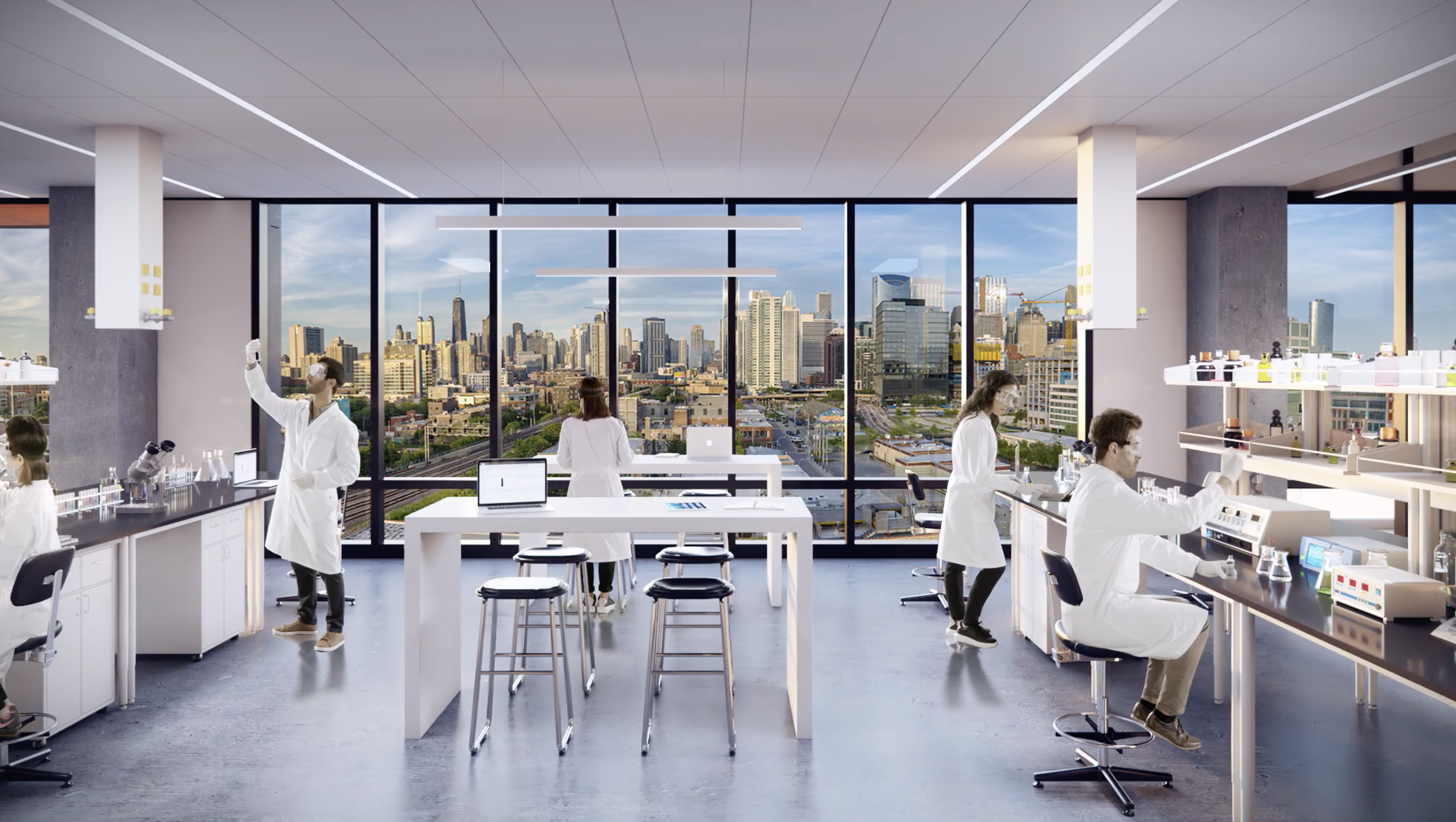 The main portion will offer tenants 34,000-square-foot floor plates with flexible layouts comprising of both office and lab space. These spaces will also include 15-foot-high floor spans, 56 feet of uninterrupted width, two private balconies facing east and west on every level, and a smart window technology by View Inc that allows for adjustable tinting to meet occupant needs. 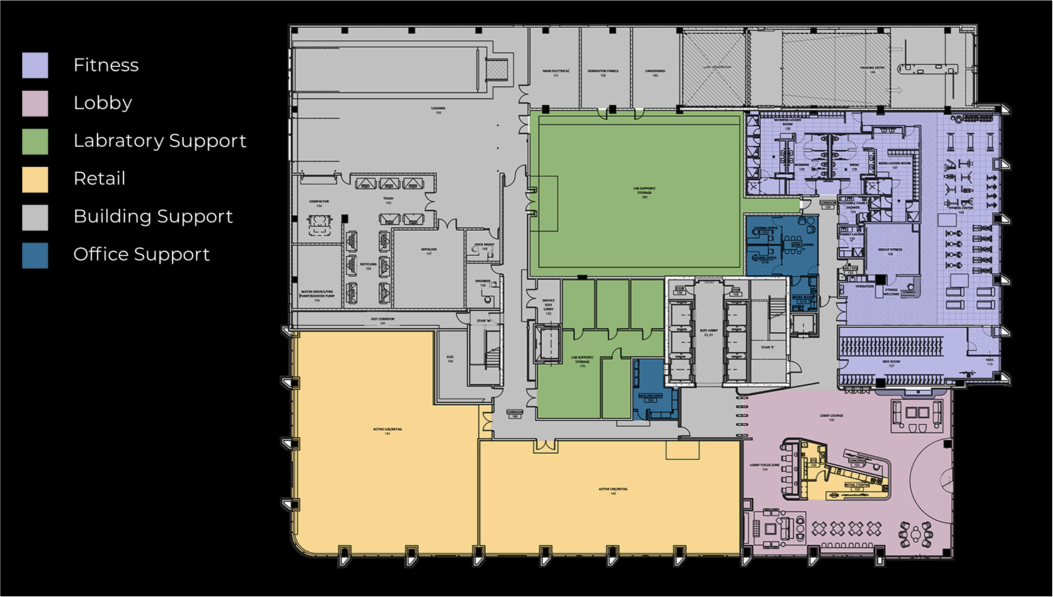 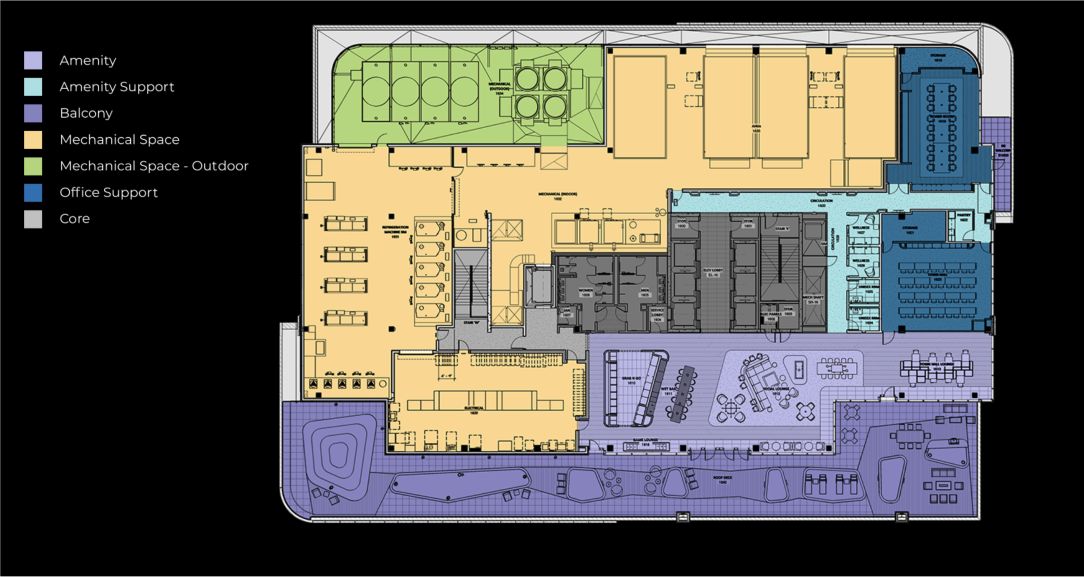 Meanwhile, retail will offer two separate units with storefronts along the west- and south-facing elevations. Bordering the retail at the southeast corner is the office space lobby, which involves a spacious open room and various seating areas. Adjacently north of the lobby is a tenant fitness center, with strength and cardio equipment, a group fitness room, and locker rooms.

The top level will offer an array of other amenities, such as a large south-facing rooftop deck with fire pits, an indoor social lounge area, a dining space, a board room, and a 165-person town hall.

Fulton Labs’s latest installment will also distinguish itself from the other office buildings rising in the area through the sheer extent of infrastructure to support its niche tenant type. These elements consist of two loading docks with one oversized vehicle slot, a vivarium, isolated ground-level chemical storage spaces, entry shut-off isolation, VC-A vibration criteria being met within the labs, and scalable generator infrastructure. 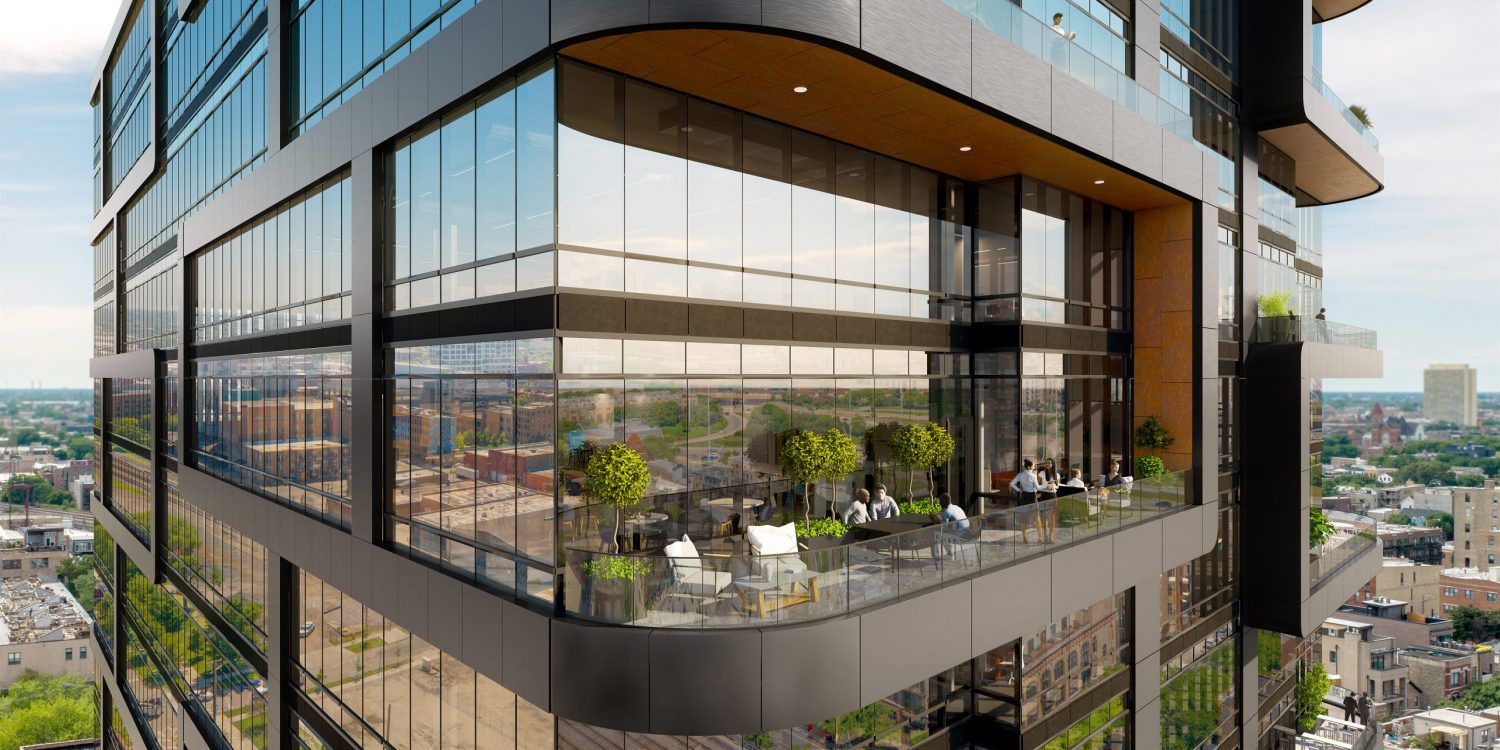 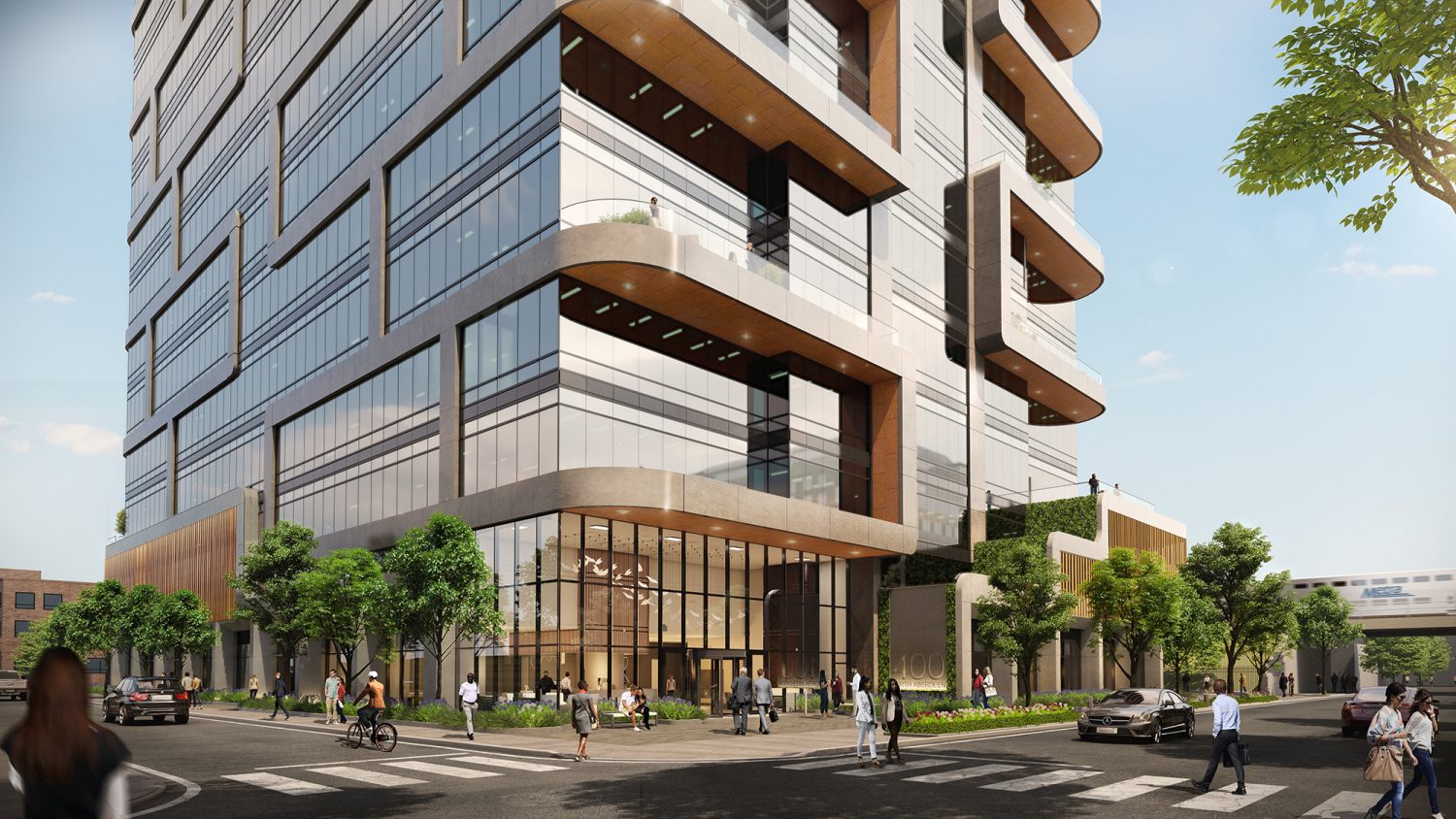 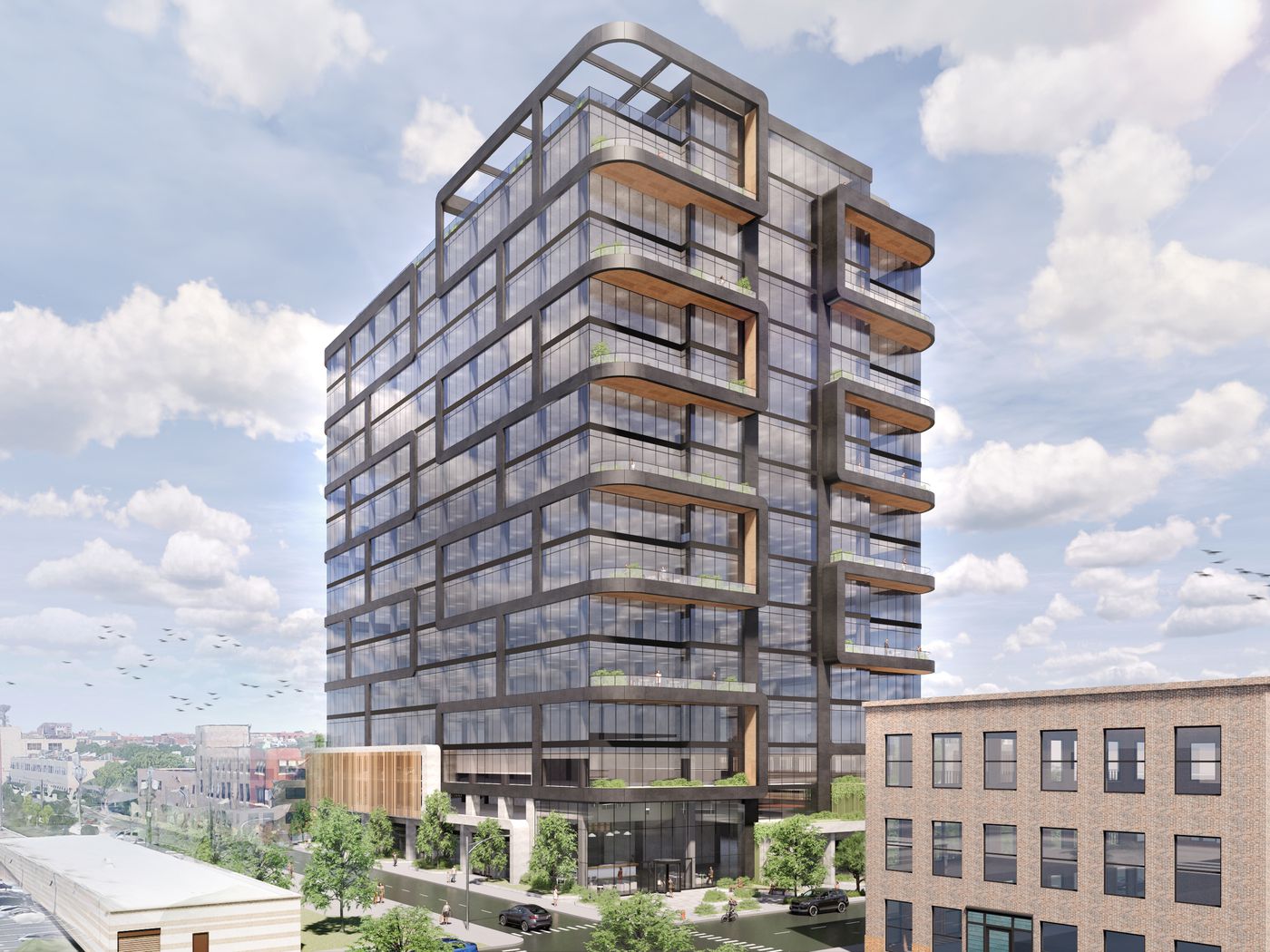 The high-tech contemporary design is the work of ESG Architects, who has envisioned a unique series of bracket-shaped balconies. Apart from the View Glass curtain wall, other materials comprise of metal paneling and concrete. 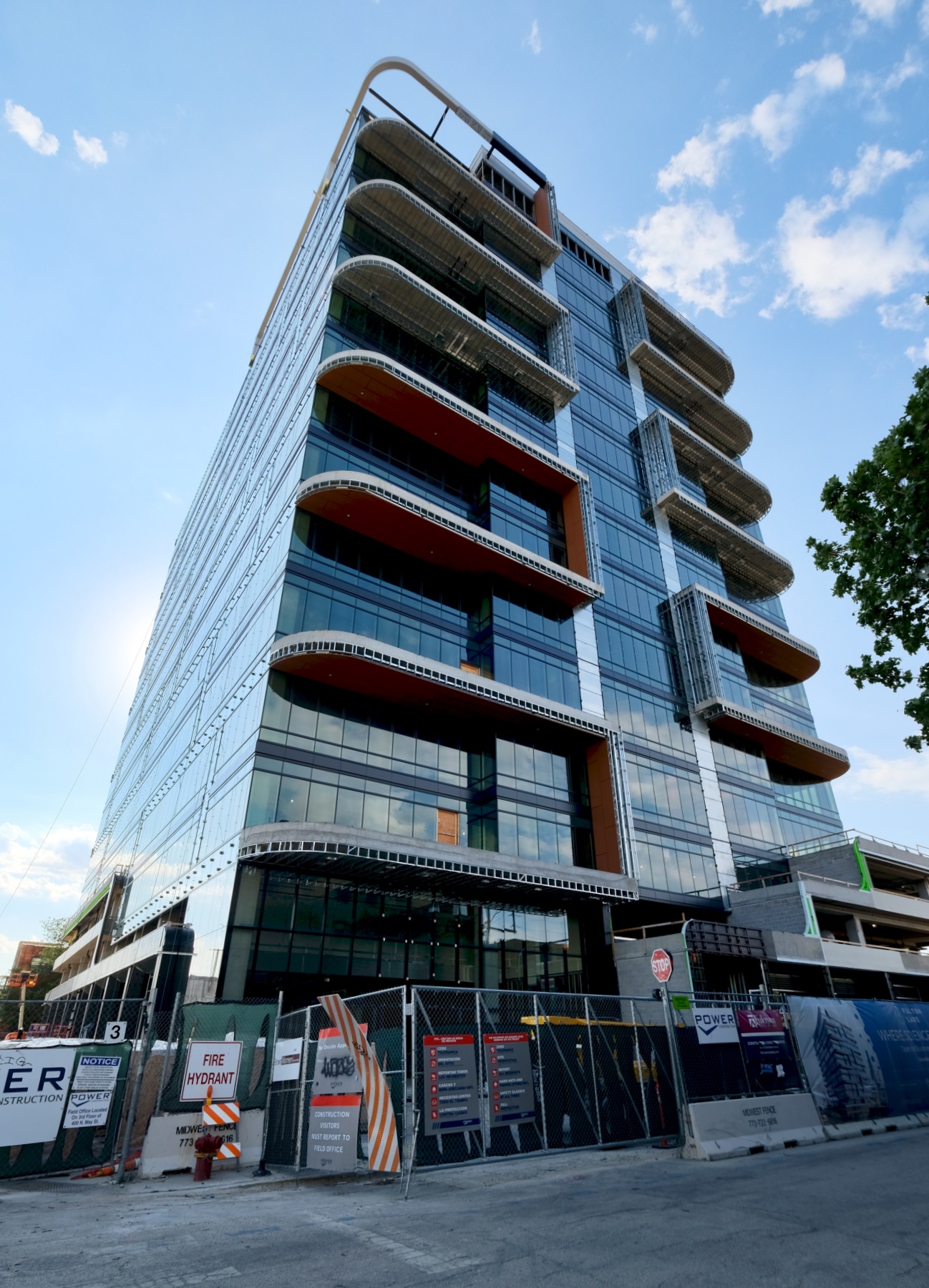 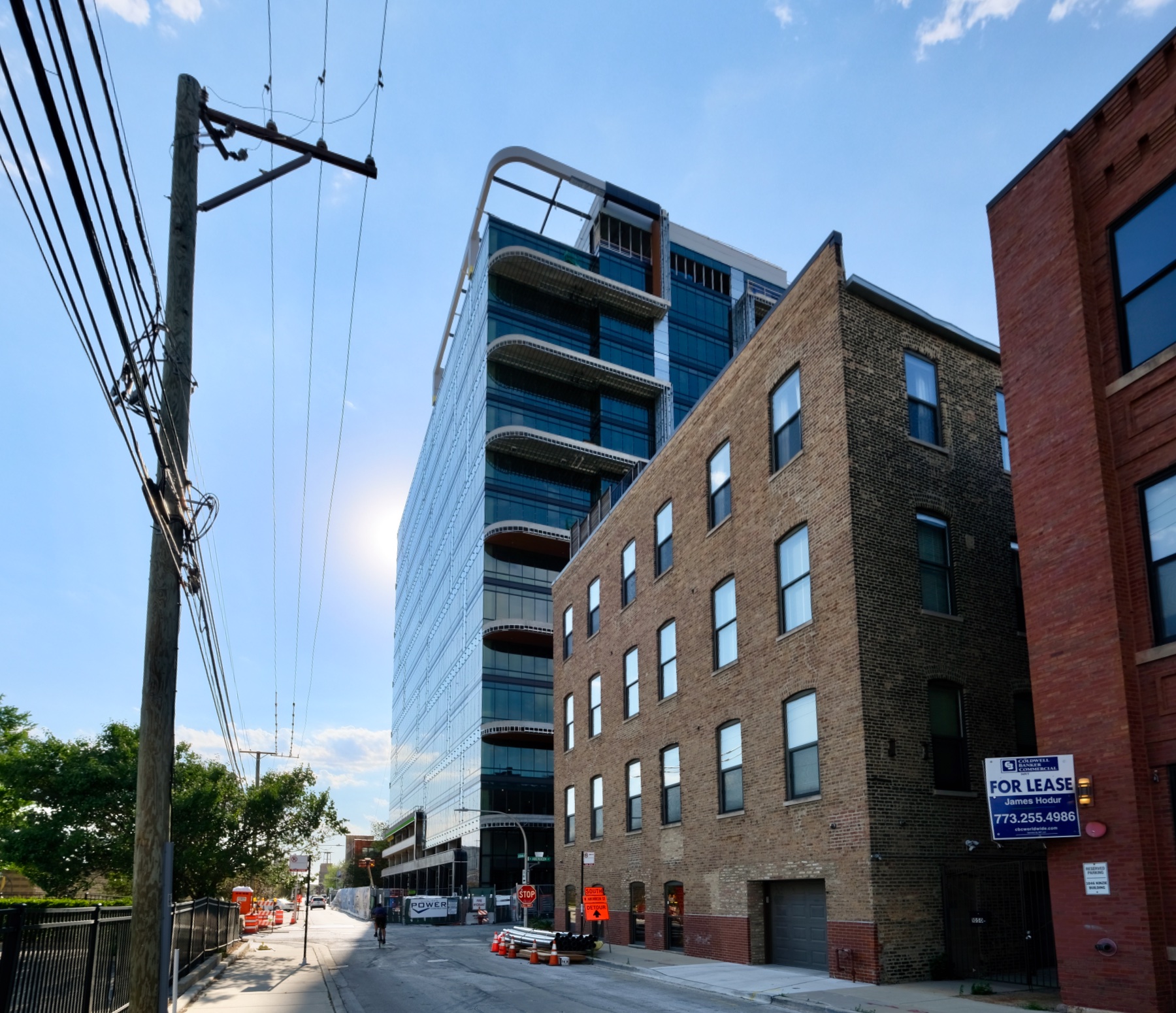 For transportation, tenants will have access to 170 spaces in an integrated garage on the second and third floors. Route 65 buses are also available at Grand & Aberdeen, located a four-minute walk north. Those wishing to board Routes 8 or 56 will find further bus service at the tri-point intersection of Halsted, Milwaukee, & Grand, a 10-minute walk northeast. For those wishing to board CTA L trains, the Blue Line can also be boarded at Halsted, Milwaukee, & Grand, while the Green and Pink Lines are accessible at Morgan station via an eight-minute walk south. 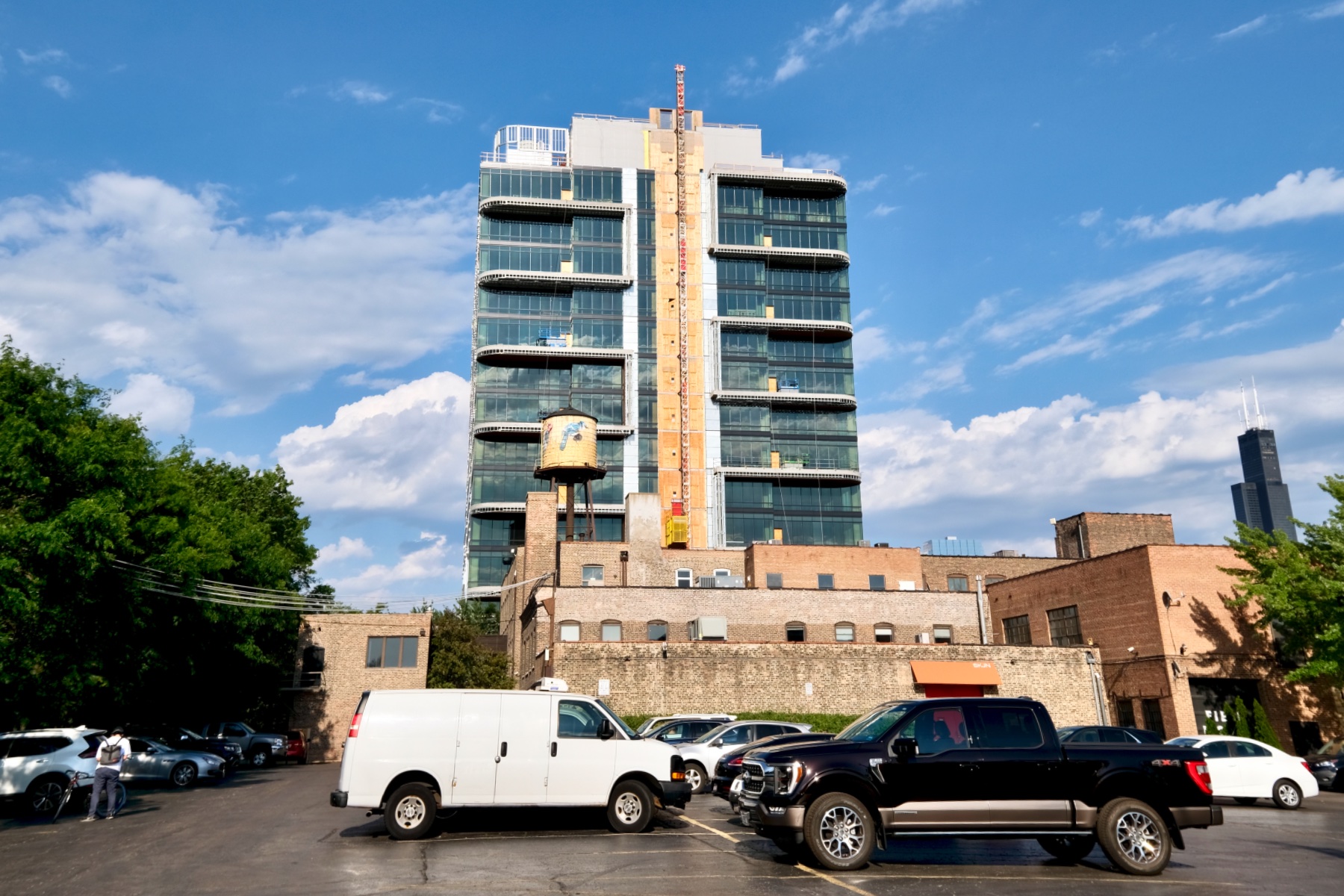 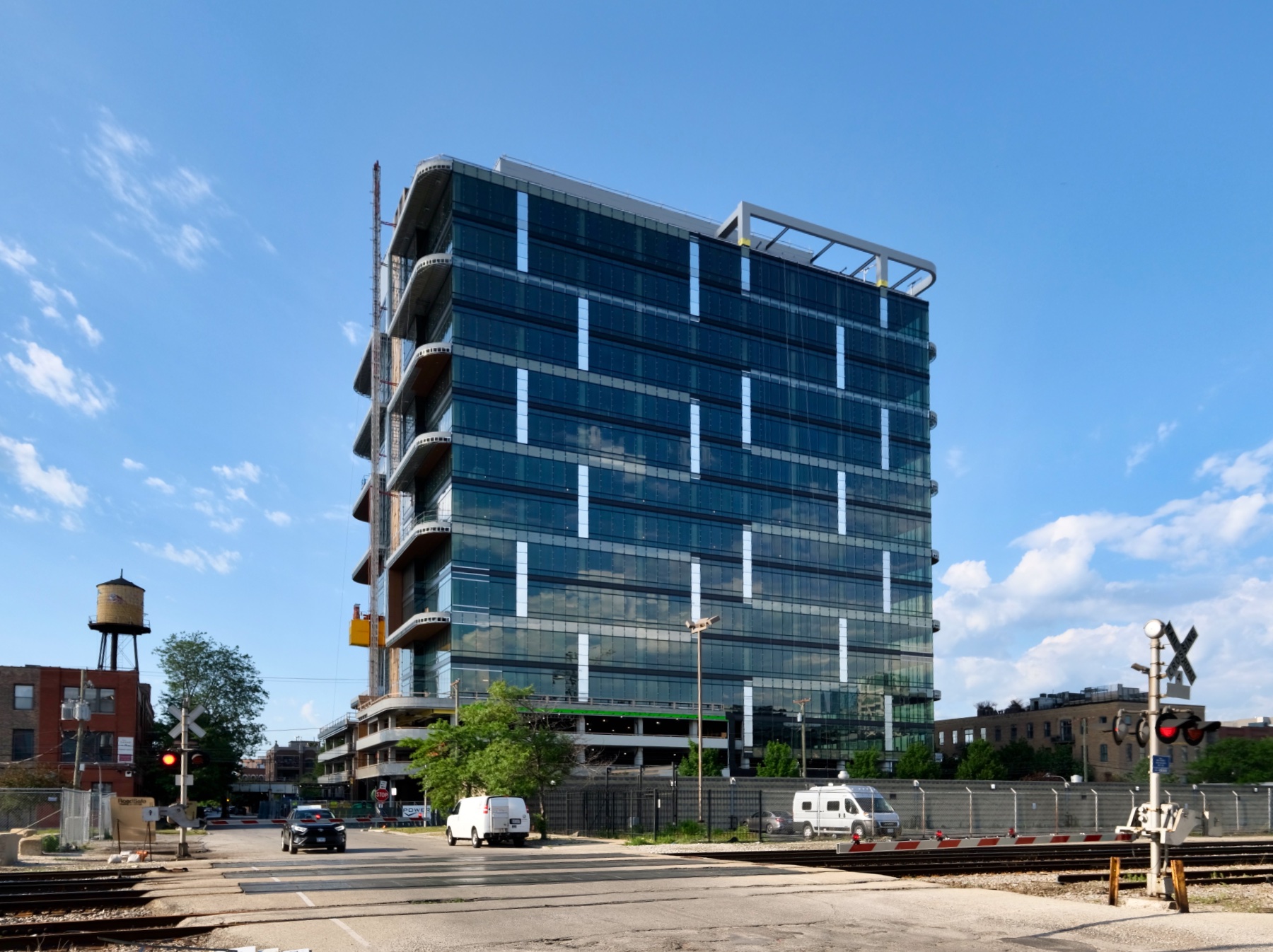 While photos of Fulton Labs at 400 N Aberdeen may depict it as an isolated tower in the neighborhood, the volume of projects currently in the development pipeline will help balance out the skyline in the coming years. Power Construction is serving as the general contractor for the $106 million scheme, with a completion date penned for the first quarter of 2022.