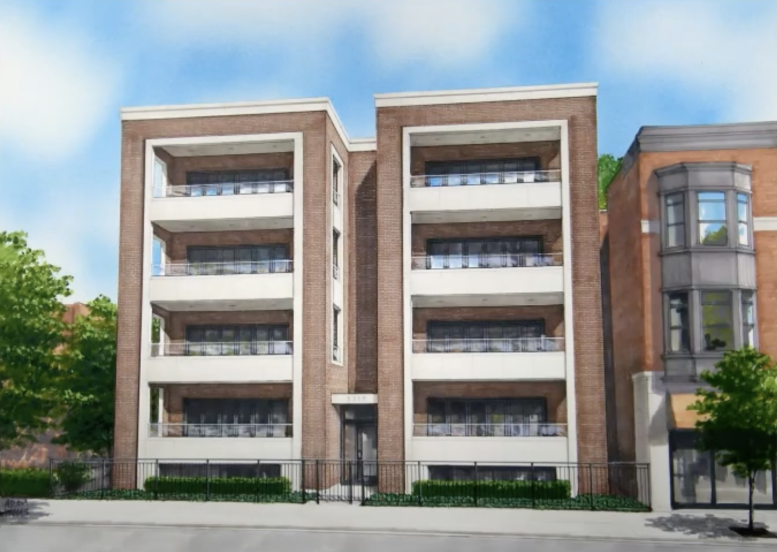 Multiple zoning ordinances have been approved for a four-story residential building located at 2215 N Halsted Street in Lincoln Park. Planned by 2215 Halsted Glascott FLP, the new structure will house eight total units as well as a rooftop deck with pergolas. The project will also provide an attached four-car garage with an additional eight spaces underground. The garage will also be topped within its own rooftop deck space and pergolas. The ordinances approved by the Zoning Board of Appeals sought to establish residential use below the second floor, reduce the north side setback from five to zero feet and the rear setback from 30 to 3.08 feet, and increase the total height from 45 to 47 feet.

Craft Architecture is behind the design, which includes a brick exterior and masonry architectural accents. The rectangular massing will also feature central vertical bay along the front, flanked by balconies stretching all four floors on each side.

For bus transportation, future residents will find stops for Routes 8 and 74 less than a minute walk south to Webster & Halsted. Additional bus access consists of Route 37, which can be found a five-minute walk north at the Fullerton & Halsted/Lincoln intersection. Available CTA L transit, meanwhile, is comprised of Fullerton station located an eight-minute walk northwest, with service for the Red, Brown, and Purple Lines.

Residents will also find the 13.3-acre Oz Park a two-minute walk southeast from the site, as well as Lincoln Park and the lakefront within a 20-minute walk east.

Currently it is unknown who will serve as the general contractor for the development, which is set to replace a two-story masonry building. Full construction permits have been filed but not yet issued, and a targeted completion date has not yet been revealed.