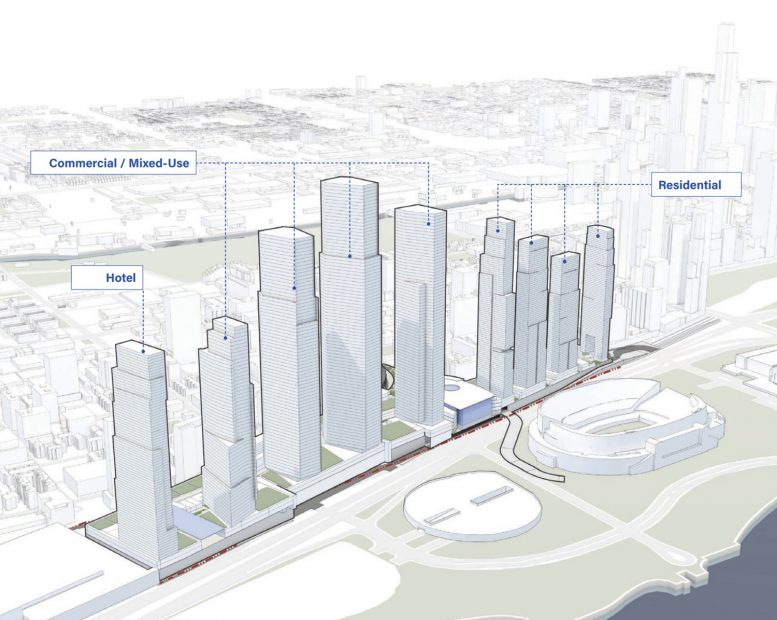 Landmark Development has revealed updated plans for its proposed ONE Central mega-development located in the Near South Side. Poised to cover the existing Metra Weldon Yard, the site spans over 32 acres from E 14th Street to the north, Inner Lake Shore Drive to the east, McCormick Place to the south, and the CN rail tracks to the west. 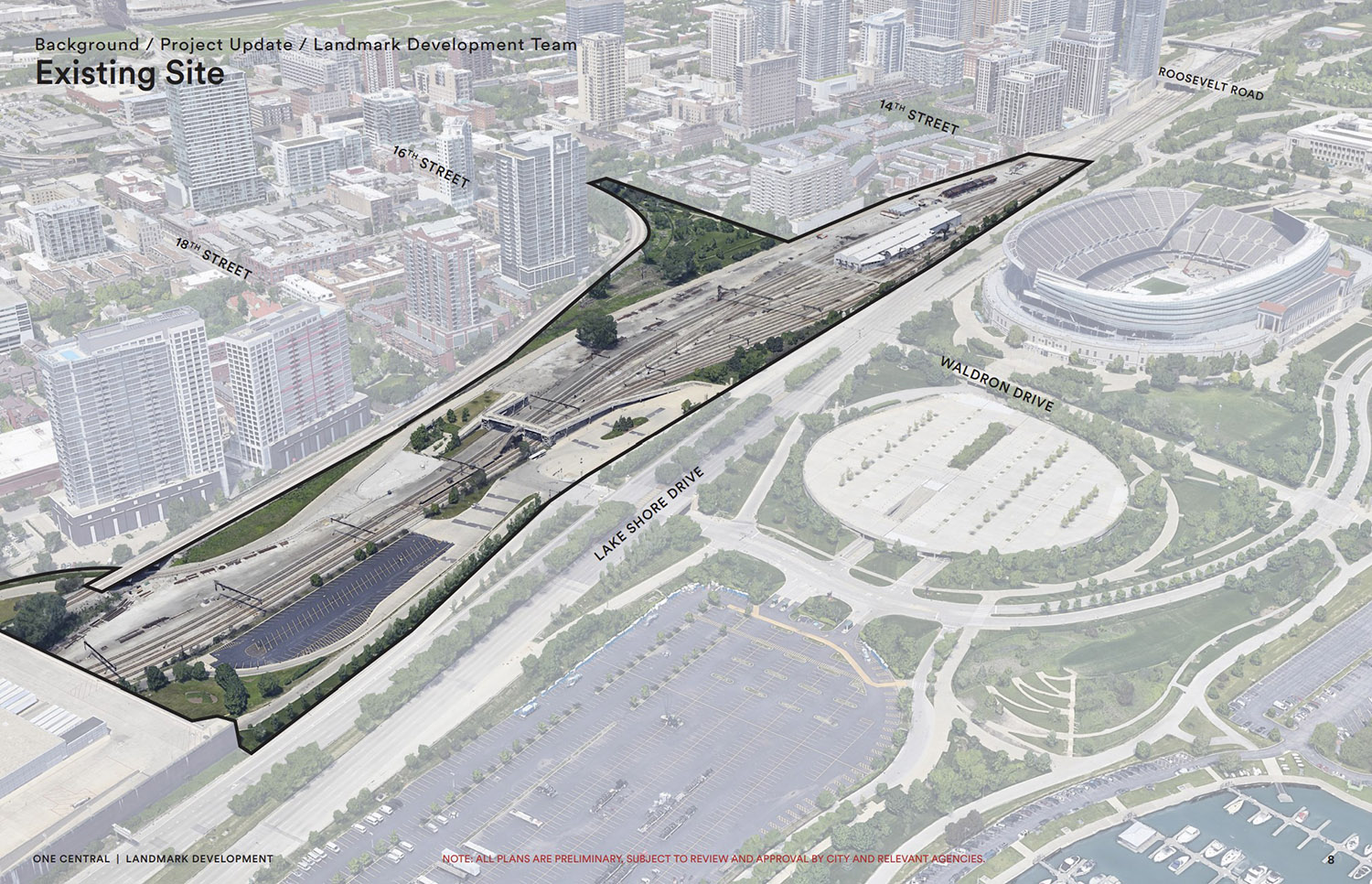 Existing Site for ONE Central. Diagram by Landmark Development

The proposal calls for up to 22,300,000 square feet of development rights. The project will have a floor area ratio of 16.42. As part of the Master Planned Development process, the project will go through regular working group meetings, then the application will be filed with the city. This will be reviewed with the city, followed up by any community meetings deemed necessary. The Chicago Plan Commission will hear the application and if approved, will need zoning approval and a final Chicago City Council approval. 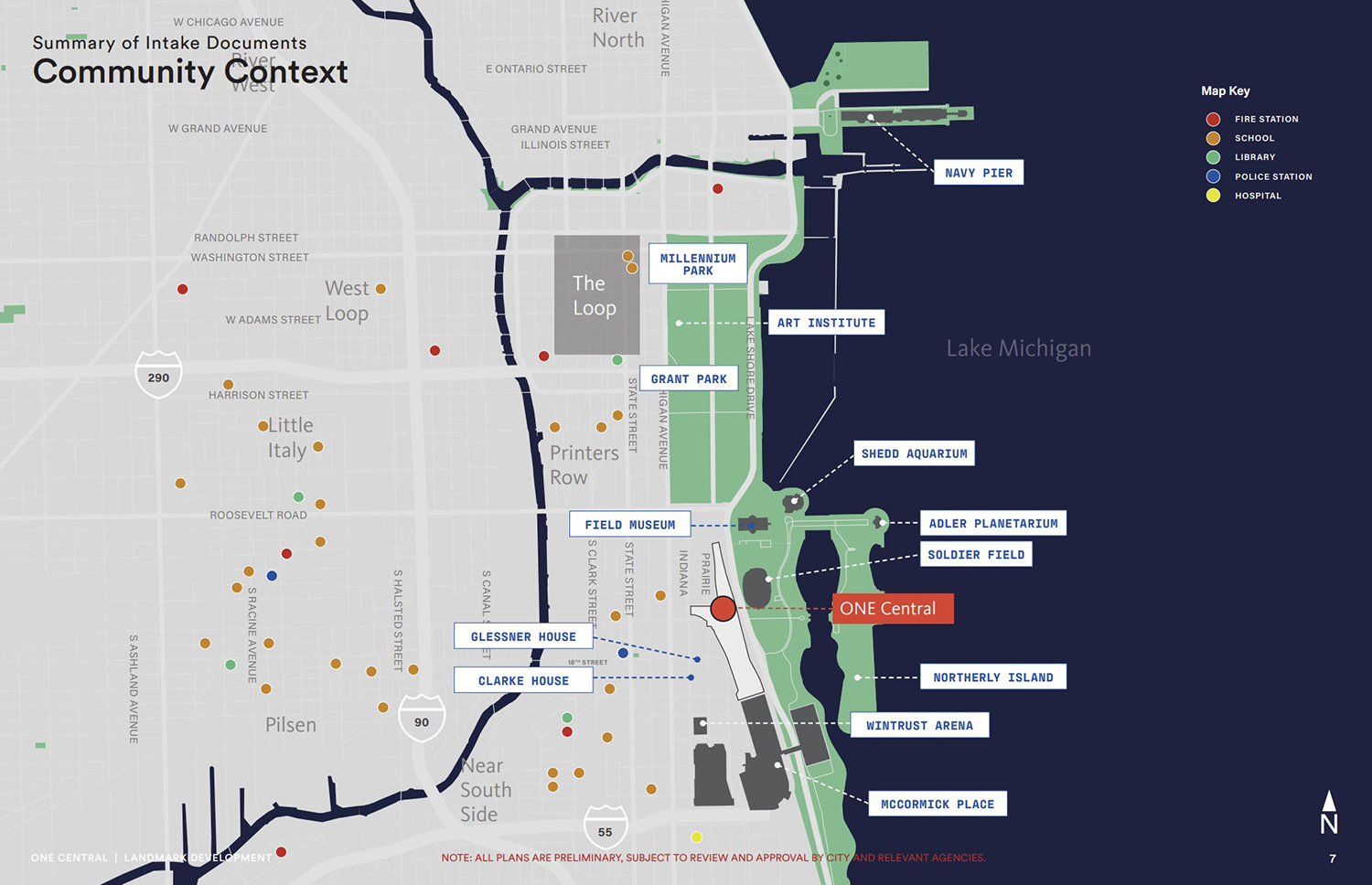 Master planned by Gensler, the mega-development consists of multiple phases. The mixed-use proposal will span the approximately 1.4 million-square-foot site. The residential portion of the building is planned to encompass 9,050 units. The lower podium will hold 1.5 million square feet of retail space. Commercial space between the different towers will total 9.45 million square feet. The development will produce 395,339 square feet of open space. 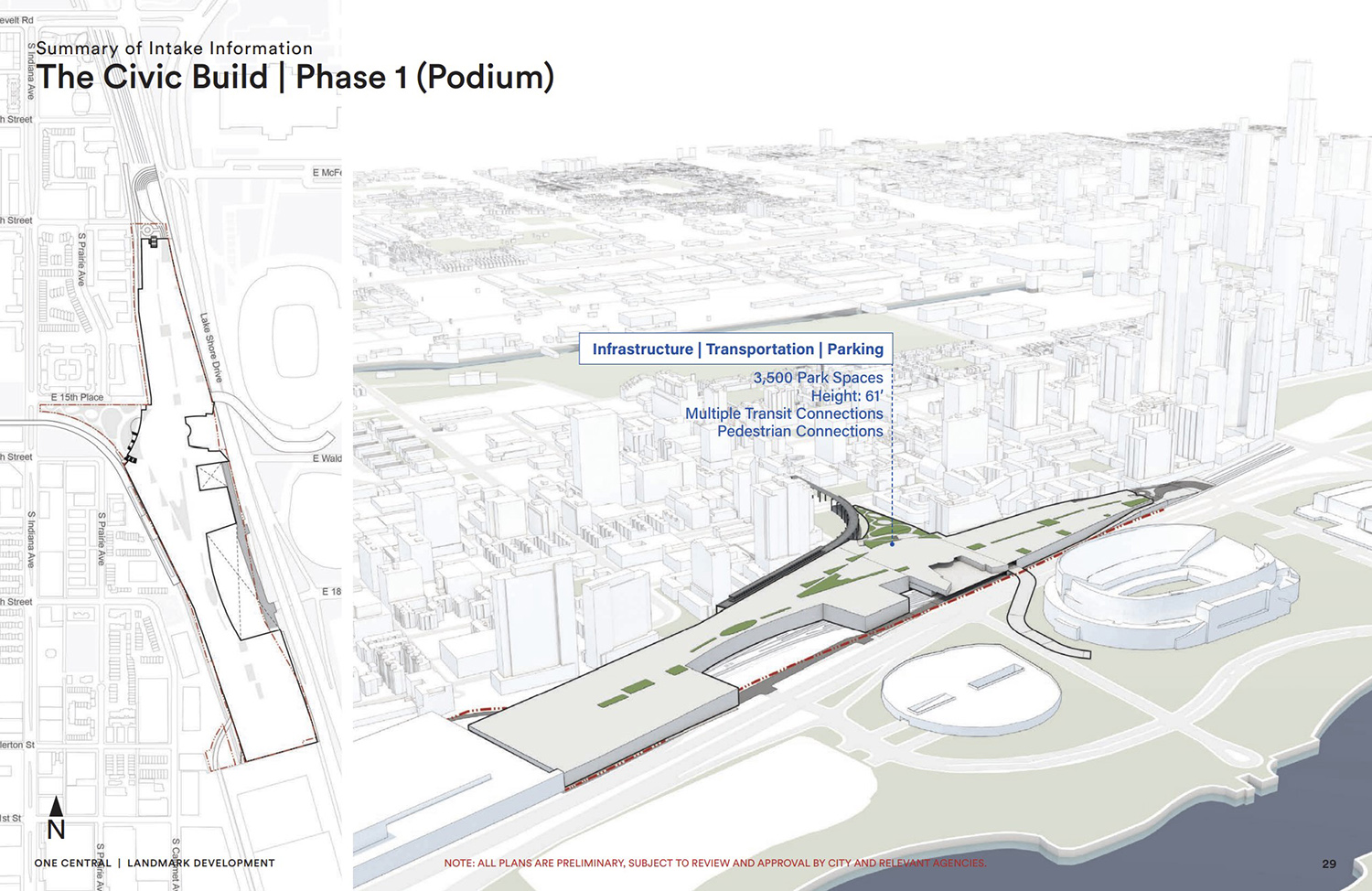 Phase 1 will consist of two parts that begin with covering the rail yard. Dubbed the Civic Build, the main podium will rise 61 feet tall and hold multiple transit and pedestrian connections, as well as 3,500 parking spaces. 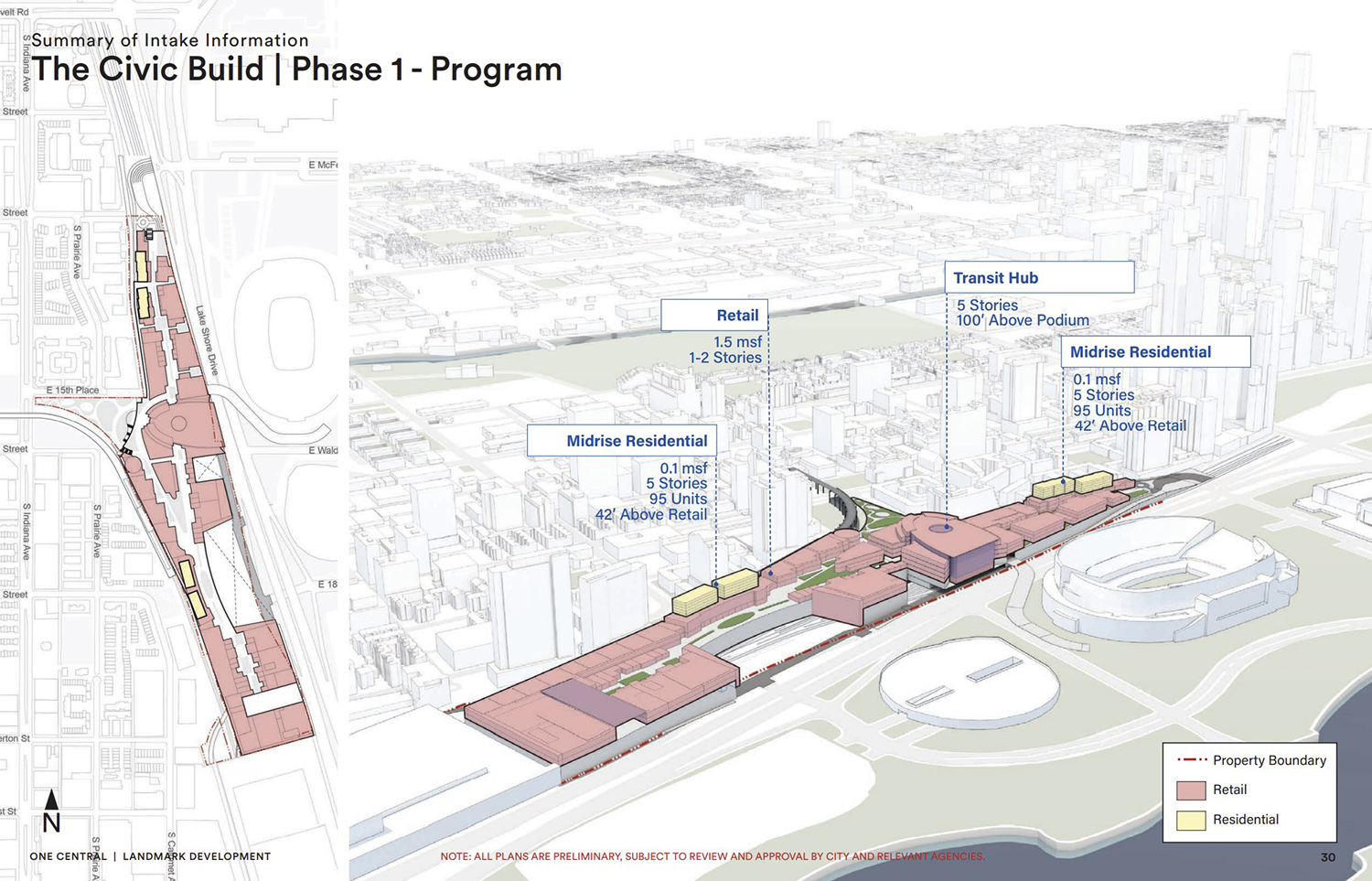 The program portion of Phase 1 will cover the site in one to two stories of retail, spanning 1.5 million square feet. The insertion of mid-rise residential is located in two spots. Identical in scope, both spots will rise five floors and 42 feet above the retail podium. They will each span 100,000 square feet and hold 95 units. 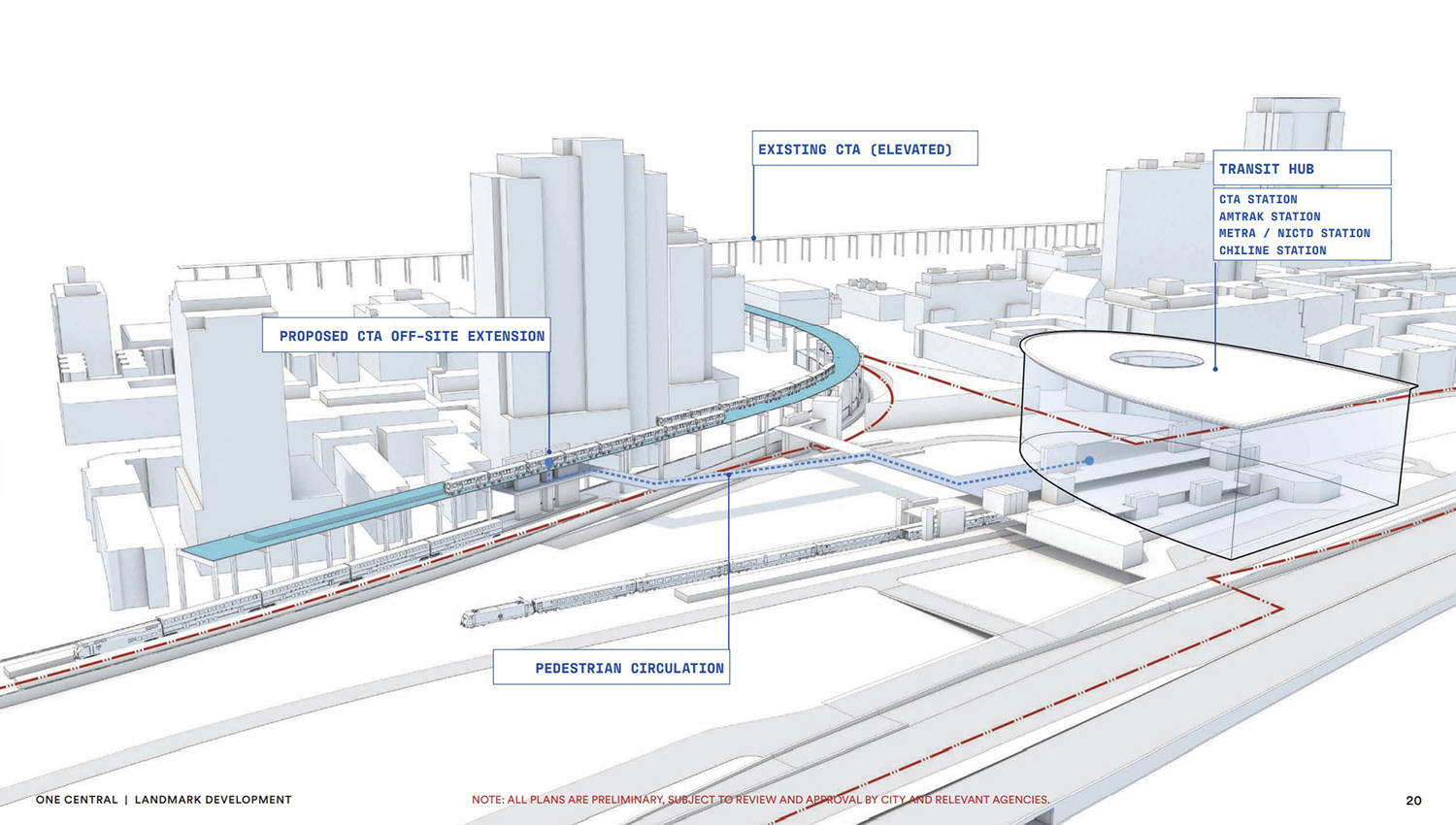 CTA Extension Plan for ONE Central. Rendering by Landmark Development

Phase 1 includes the proposed transit hub, a cornerstone of the mega-development. Holding five floors, the structure will rise 100 feet above the podium. The multi-modal hub will connect the project to the rest of the city. Poised to cost $3.8 billion, the infrastructure improvements will connect Metra/NICTD, the CTA via a proposed extension, Amtrak, and a tram-like line called the CHI-Line. 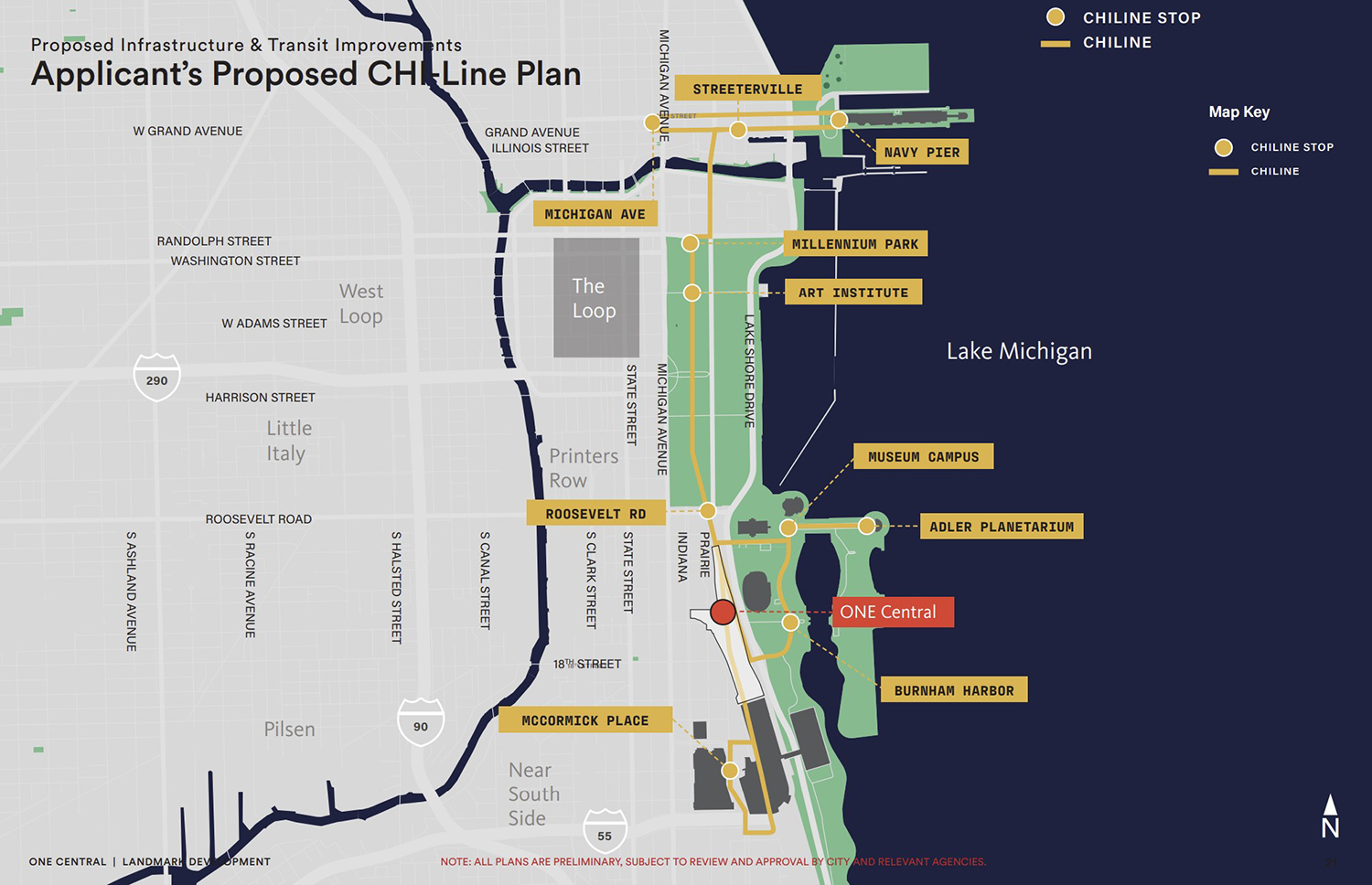 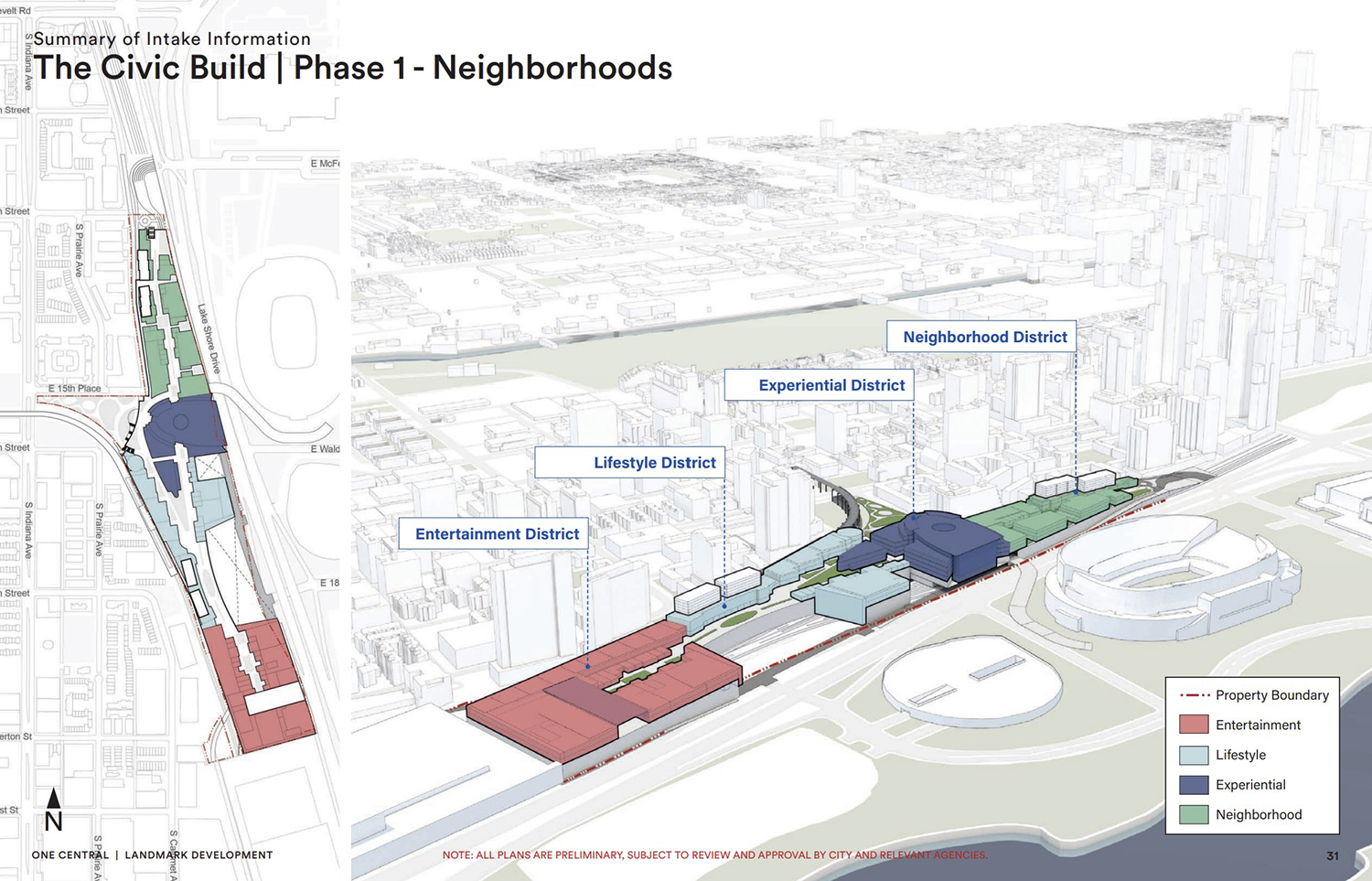 Phase 2, dubbed Vertical Build, will also be broken into two sub-phases, with a total estimated investment of $16 billion. Phase 2A, planned for 2025 through 2035, will feature a mix of uses and multiple towers. The first tower will encompass 1.2 million square feet of commercial mixed-use space. It will include between 45 and 55 stories, rising 770 feet above the retail podium. The second tower will be exclusively hotel in use, spanning 1.5 million square feet. With 2,500 hotel keys, the tower will have between 60 and 80 floors, rising 806 feet above the podium. Located on the northern portion of the site, four residential towers will be clustered together. Encompassing 9.3 million square feet, it will hold 8,860 units, with the towers rising between 60 and 89 floors. The tallest one will rise 890 feet above the retail podium. 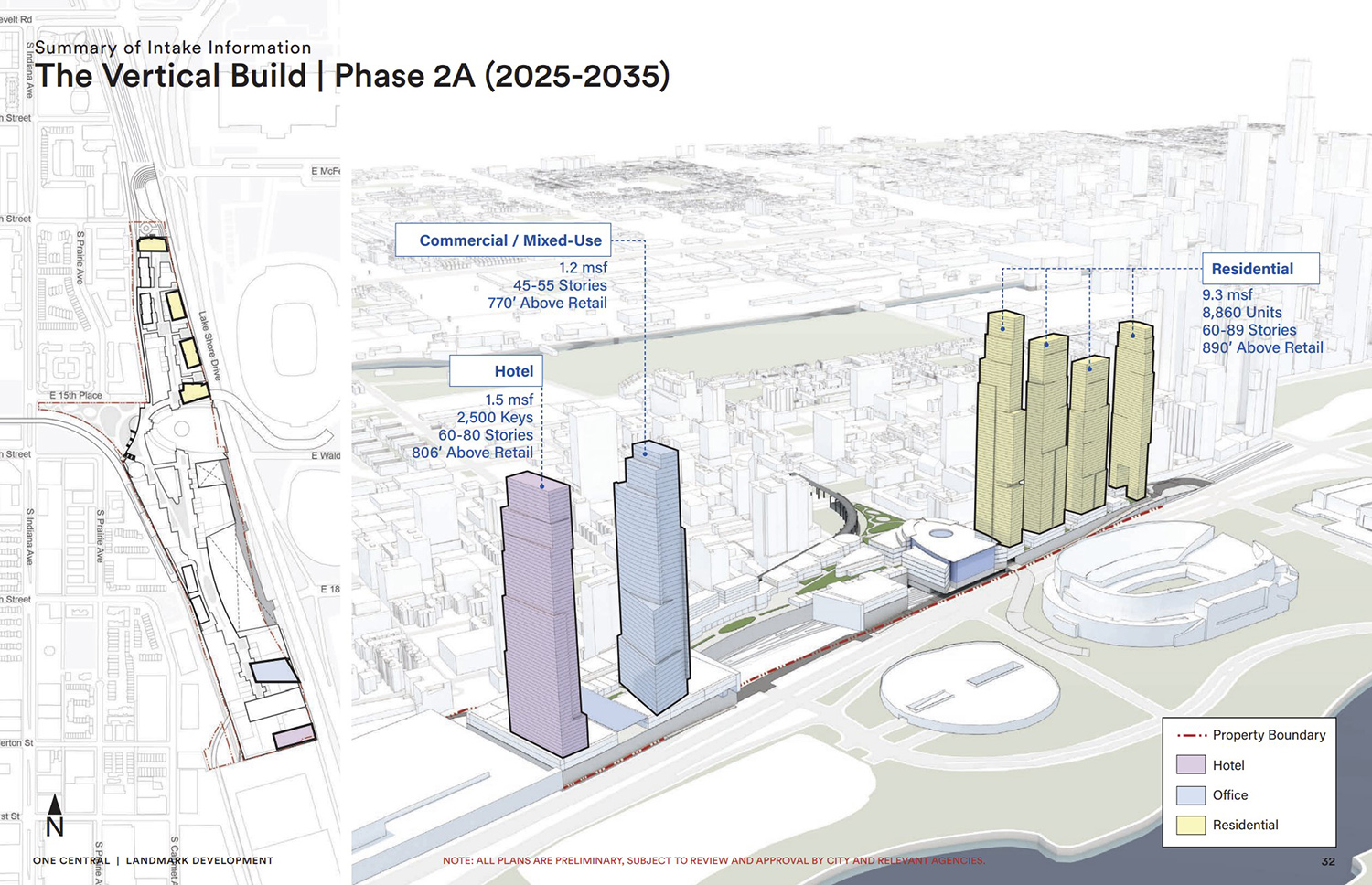 Vertical Build Phase 2A for ONE Central. Rendering by Landmark Development 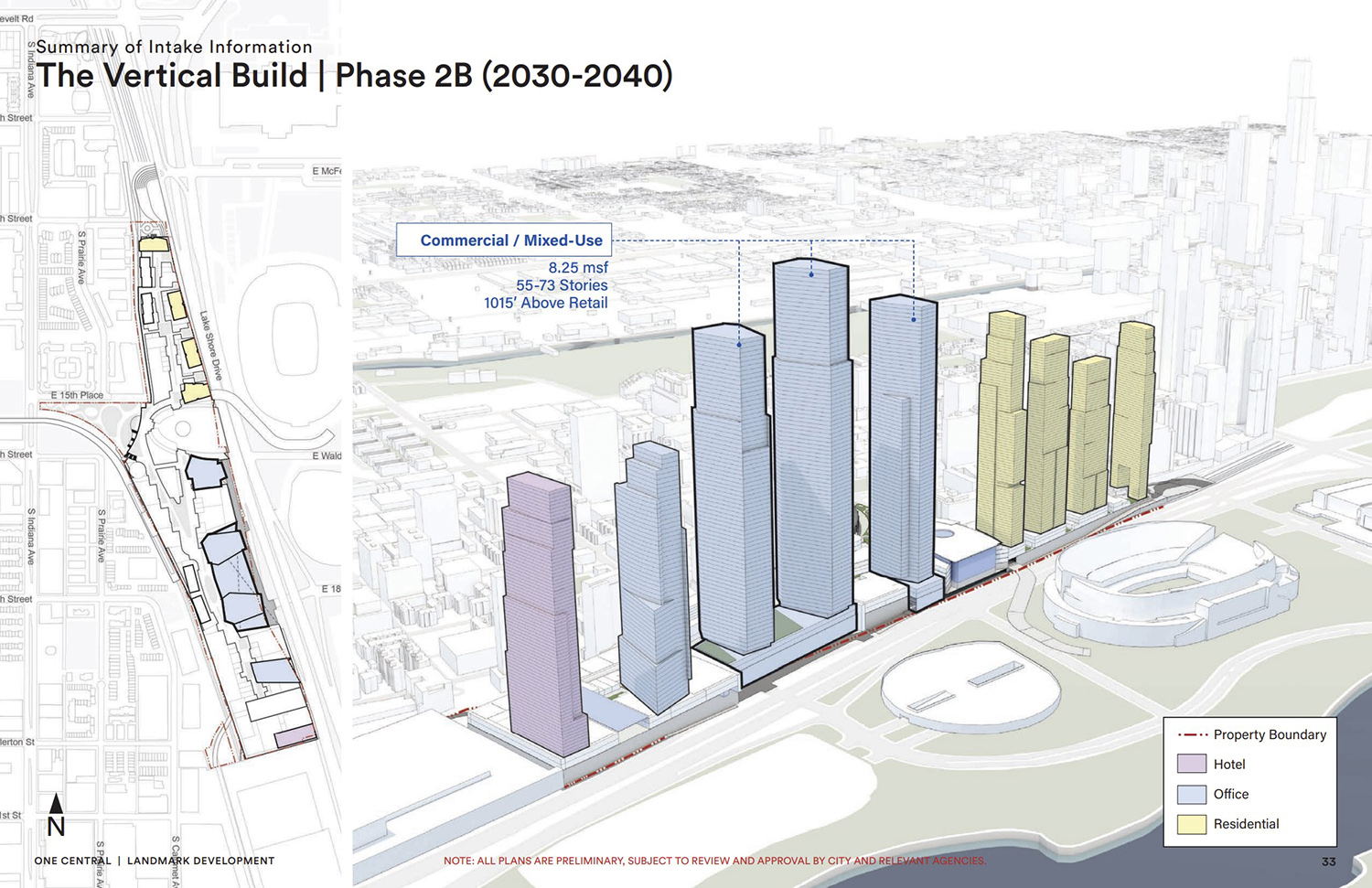 Vertical Build Phase 2B for ONE Central. Rendering by Landmark Development

Phase 2B, planned for 2030 to 2040, will be the final phase of the development. Consisting of three towers, the phase will consist of commercial and mixed-use space. Totaling 8.25 million square feet, the towers will rise between 55 and 73 stories. Their height will be 1,015 feet above the retail podium. 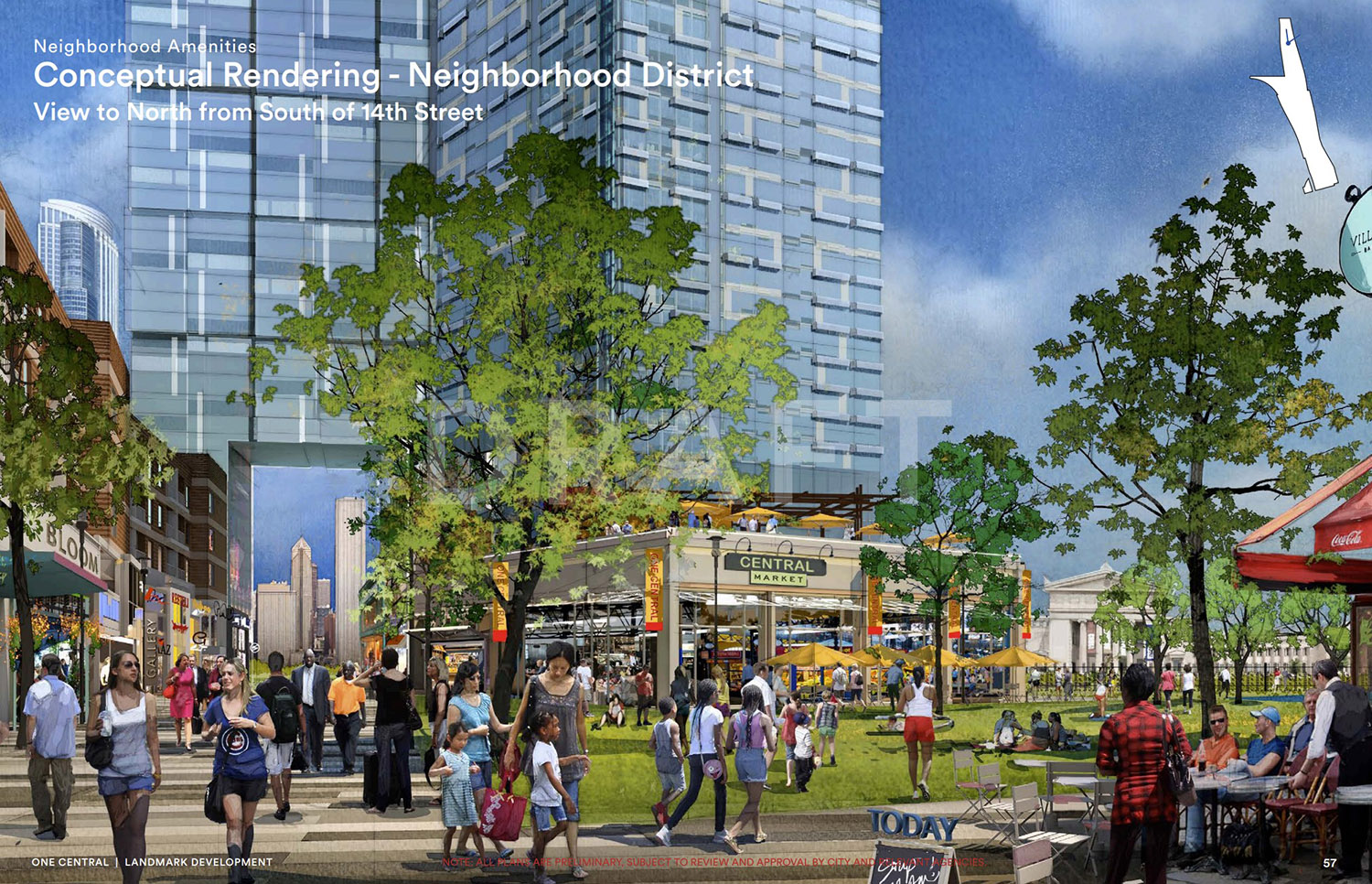 Financially, the proposal does not utilize TIF funding. The Civic Build portion is a private-public partnership that was approved in spring 2019 by the State of Illinois. This is fully privately financed, with the assets becoming state-owned after 20 years of fixed payments by the state. This means the infrastructure assets will become publicly-owned. The developer will contribute nearly $5 billion toward the cost to design, build, finance and operate the Civic Build over the 20-year period. 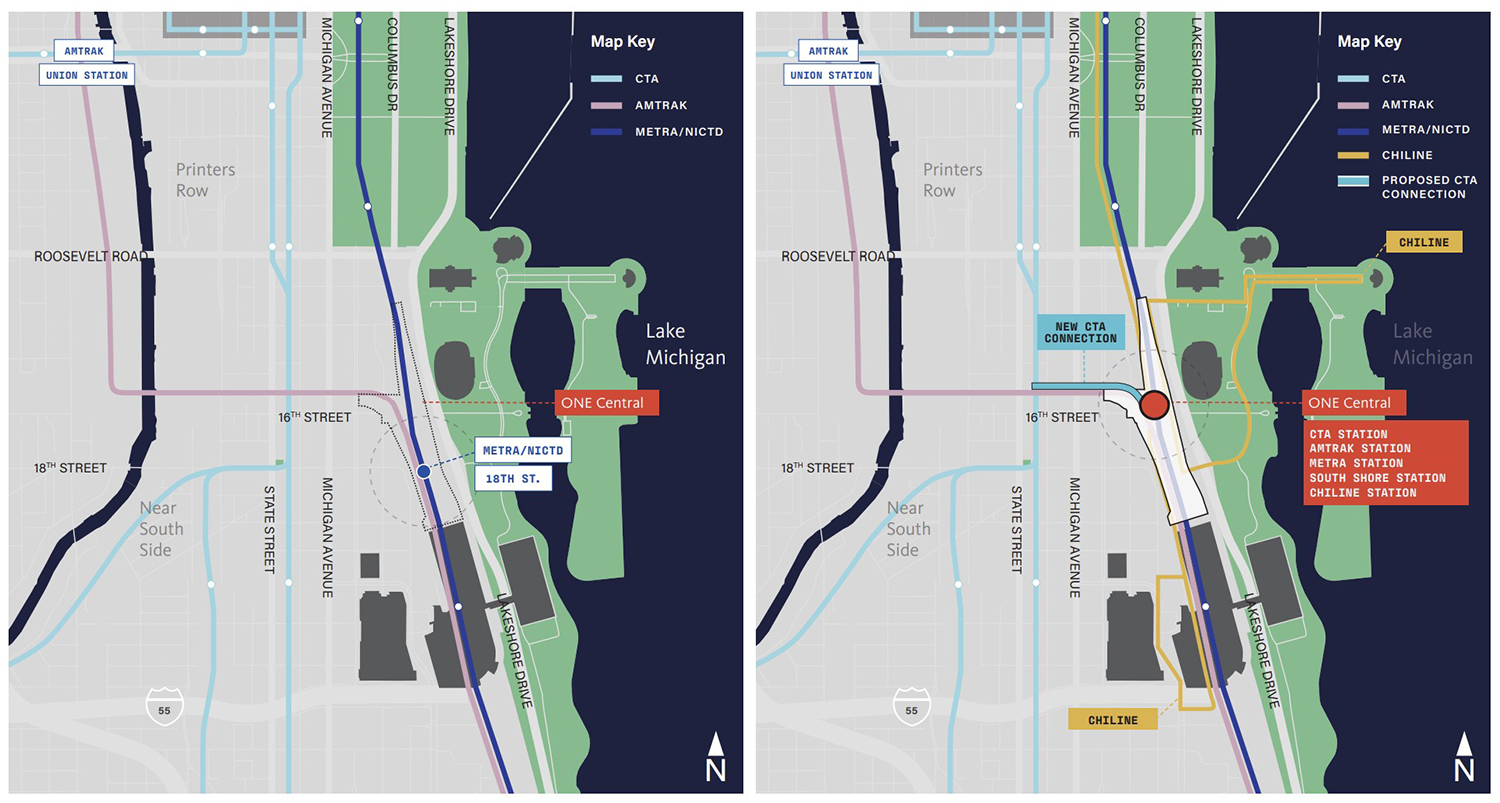 Transit improvements will primarily use existing infrastructure, with the exception of the CTA extension, located in the CN railway corridor. A final plan for the transit improvements has not been determined. Landmark Development is actively consulting with Metra, Amtrak, and CTA. 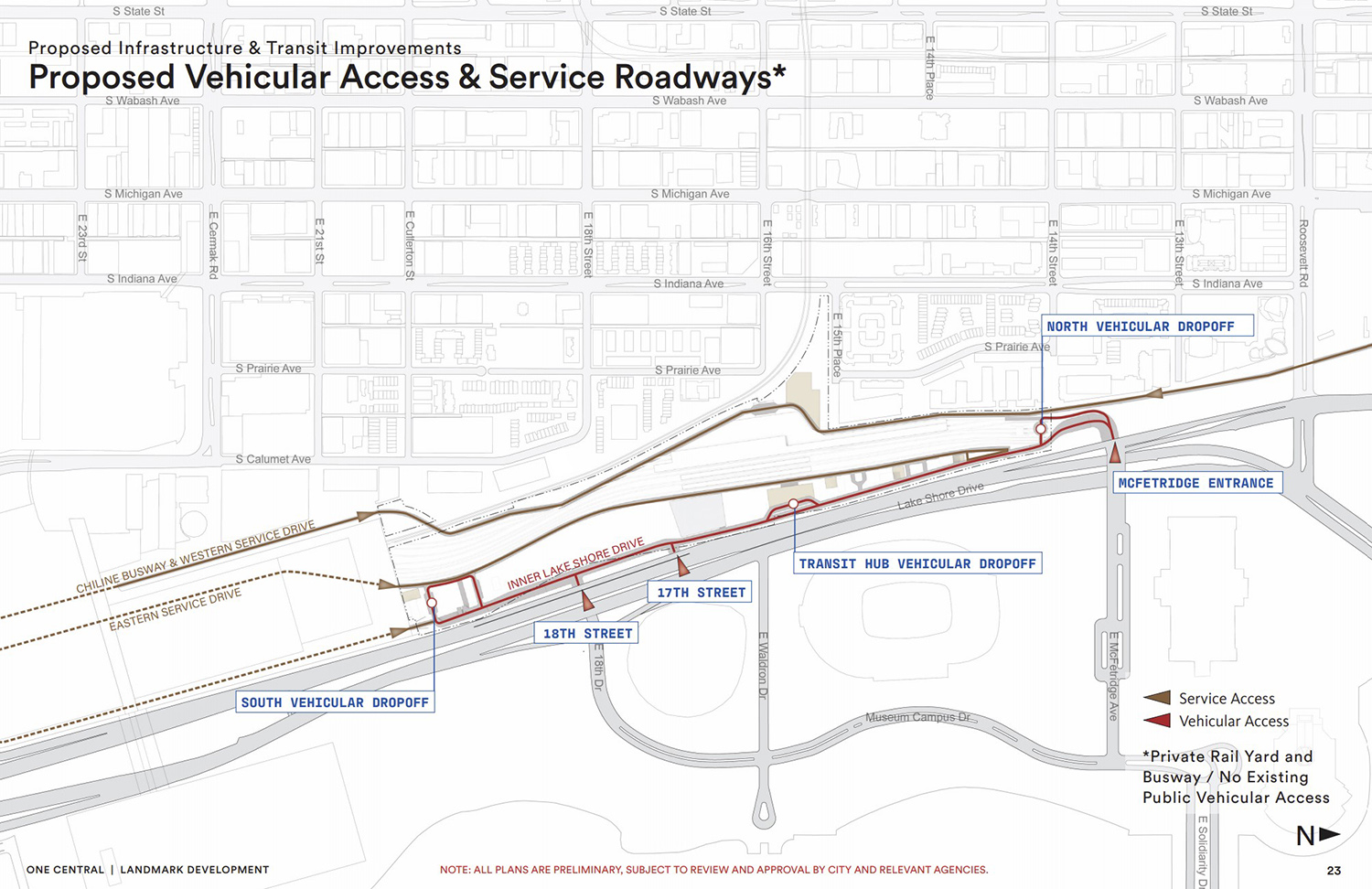 Proposed Vehicular Access for ONE Central. Diagram by Landmark Development

Vehicular access to the site has been addressed with specific goals in mind. To minimize traffic in the neighborhood, there are no vehicular access points on the western side. Cars can enter at E 17th Street and E 18th street from S Lake Shore Drive. There will be a drop-off at the welcome center. There is an entrance at E McFetridge Avenue, as well as from the southern end of the development via two service drives. 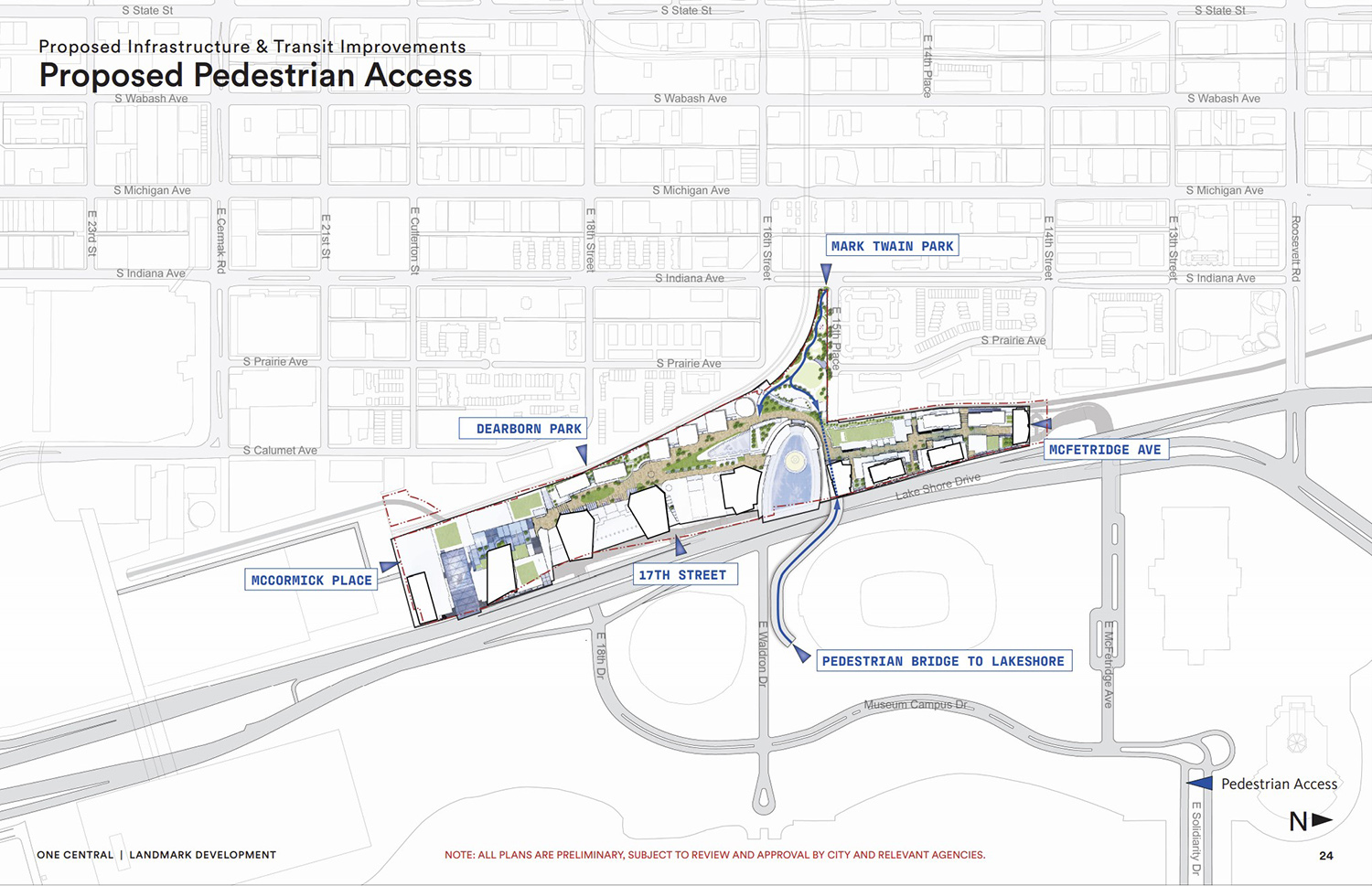 Proposed Pedestrian Access for ONE Central. Diagram by Landmark Development

Pedestrian access to and through the project from the western side is from Mark Twain Park at Battle at Fort Dearborn Park. For access from the lakeshore, pedestrians can enter from McCormick Place on the southern end, via an underpass at E 17th Street, across a new pedestrian bridge over Lake Shore Drive, and via E McFetridge Avenue. A pedestrian street will run through the entire development from the northern end to the southern end, connecting the different districts, featuring a series of outdoor spaces. 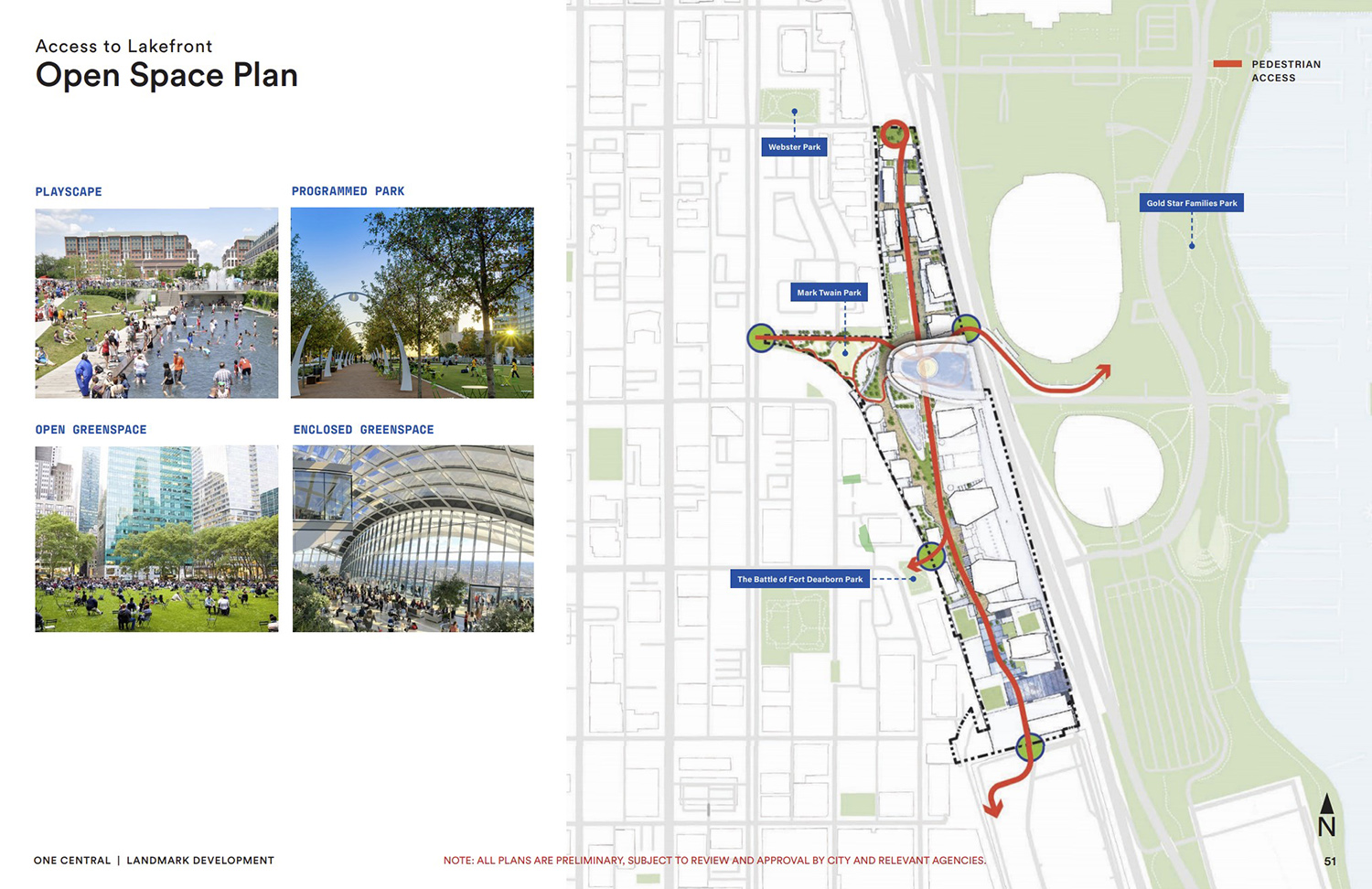 Open Space Plan for ONE Central. Drawing by Landmark Development

The master plan is proposed to accommodate approximately over 11 acres of on-site green and open space. Mark Twain Park will be maintained and improved as a publicly-accessible open space. There will be multiple direct connections to the Lakefront bridging over Lake Shore Drive. The development will provide a maintenance and public access easement agreement for the proposed open spaces to be recorded on the property. 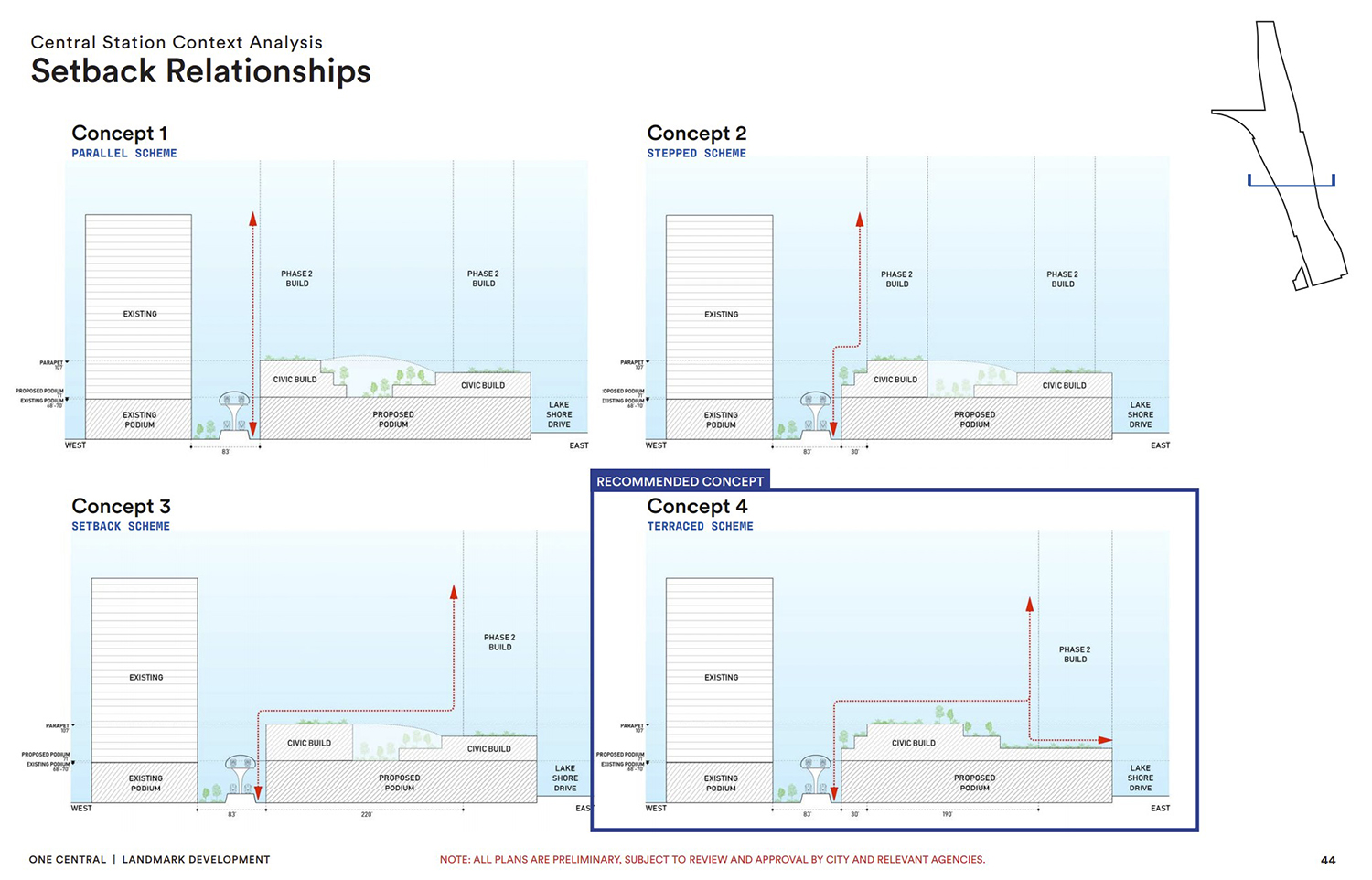 Setback Studies for ONE Central. Diagrams by Landmark Development

This proposal is still in its early stages, with public infrastructure agreements required, and extensive city review still to come. While a formal timeline has not been finalized, the developer has indicated that they expect the project to span decades, aiming for completion possibly by 2040.