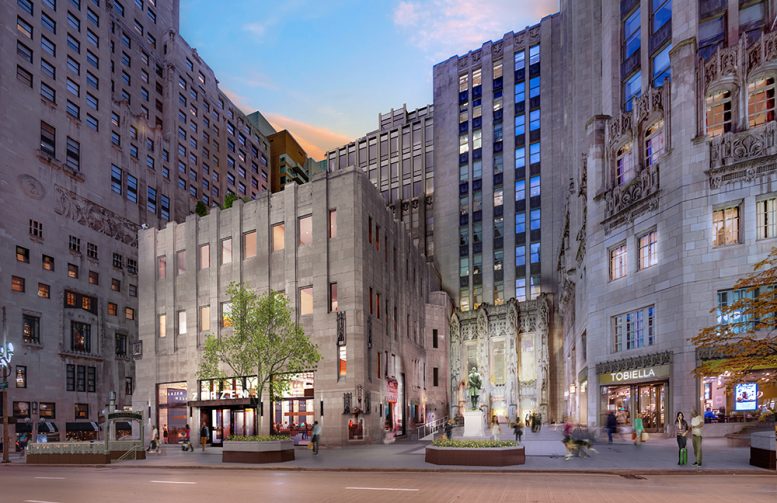 At number 17 in YIMBY’s end-of-year development countdown, the residential and retail conversion of the 34-story Tribune Tower is nearing completion along Magnificent Mile. 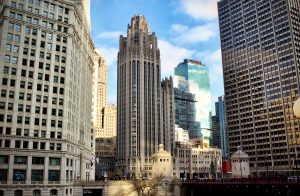 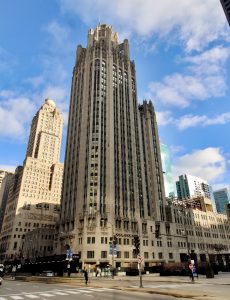 The landmarked 463-foot-tall tower at 435 N Michigan Avenue was initially designed by John Meads Howells and Raymond Hood, as part of a high-profile competition for the Chicago Tribune’s new headquarters. Upon its completion in 1925, the Gothic Revival building would house the newspaper for 93 years up until 2018. The building sold to developers CIM Group and Golub & Company, who began plans to repurpose the space. The new programming is set to contain 47,500 square feet of retail, 162 condominium residences, and 55,000 square feet of amenities. 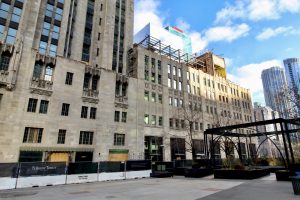 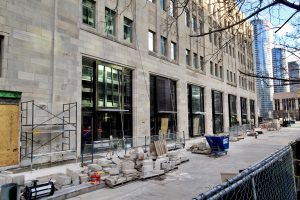 As far as the retail segment occupying the tower base, the co-developers planned a series of multi-level flagship stores facing Michigan Avenue to the west and Pioneer Court to the south. 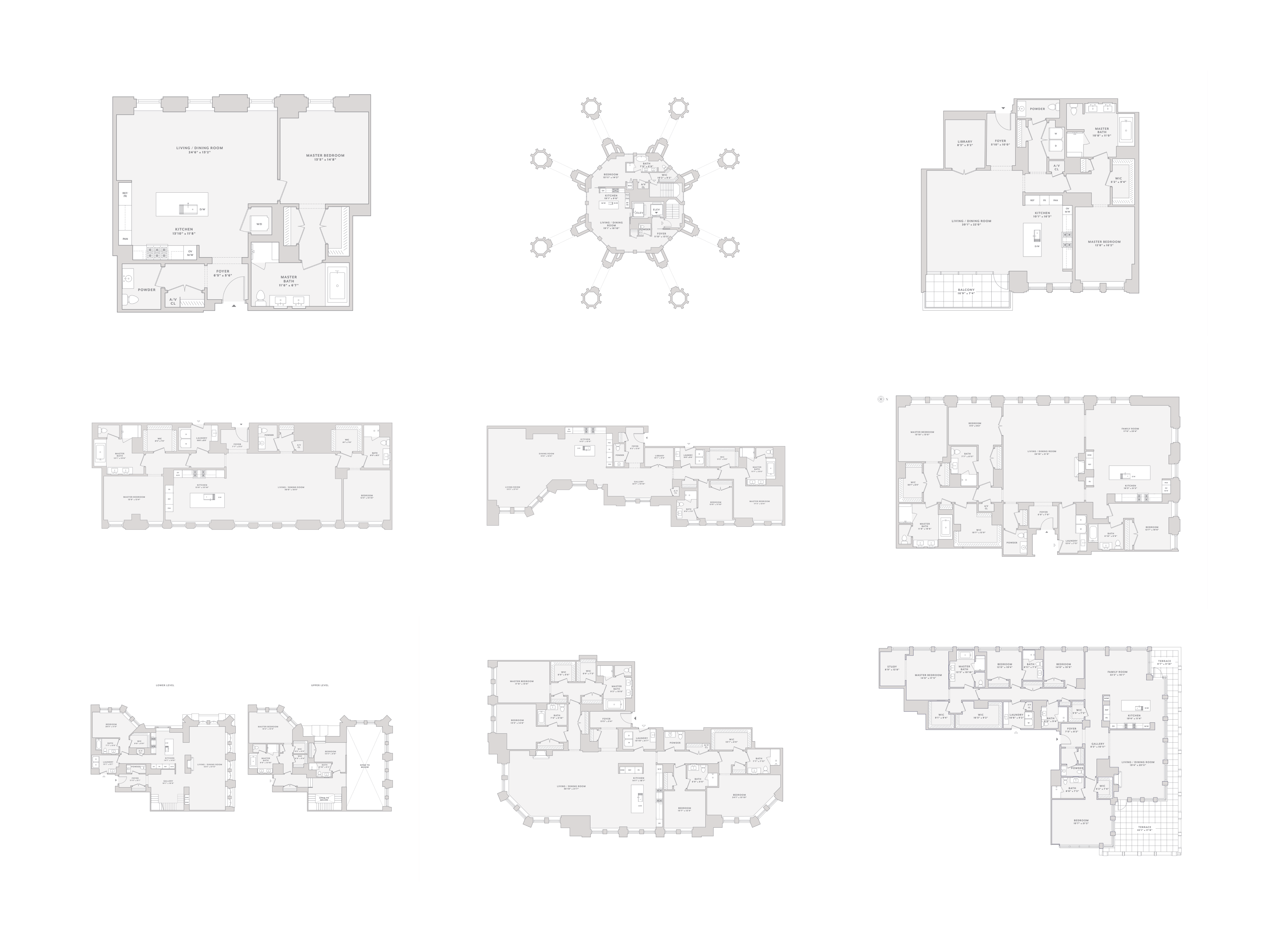 Various floor plans, ordered by size (not to scale). Plans by SCB

As for the condominium residences, the unique layout of the existing floor plates have allowed for 56 different unit plans. These residences will occupy the top 30 stories of the main tower, as well as the two attached wings to the east. The architect of record Solomon Cordwell Buenz has designed a contemporary four-story addition for the northern wing, bringing its total height to 12 stories. Meanwhile, the southern wing will retain its existing seven floors. 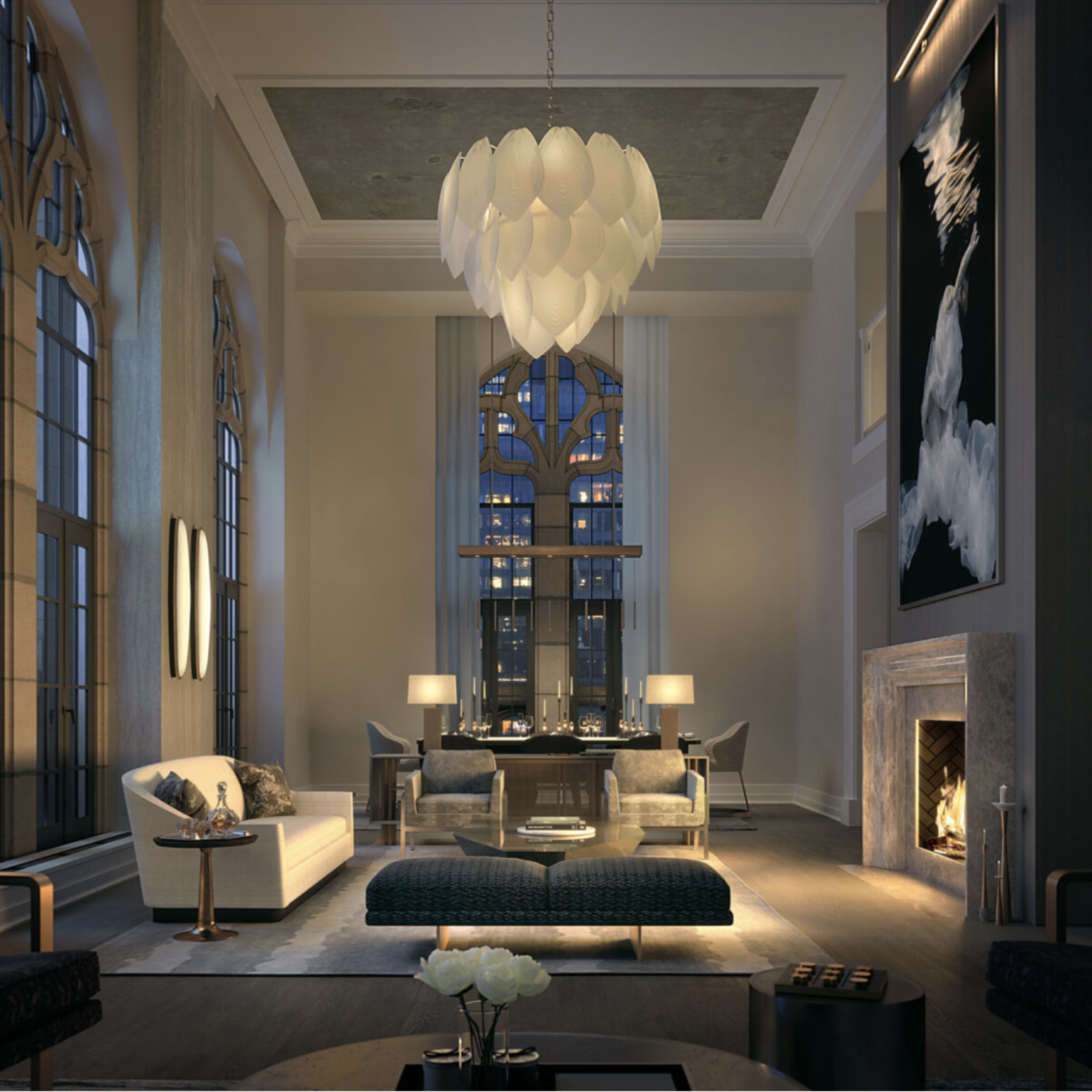 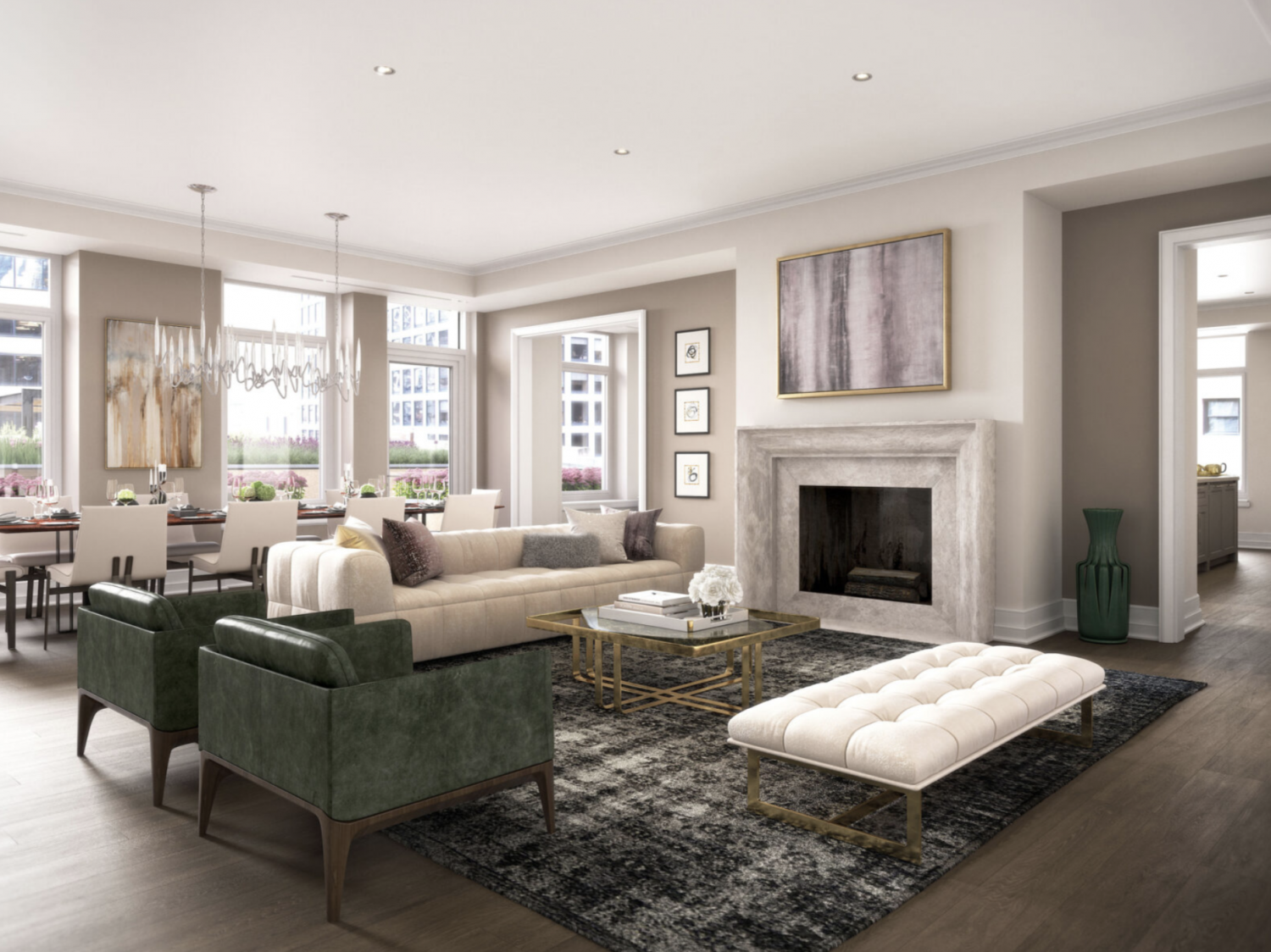 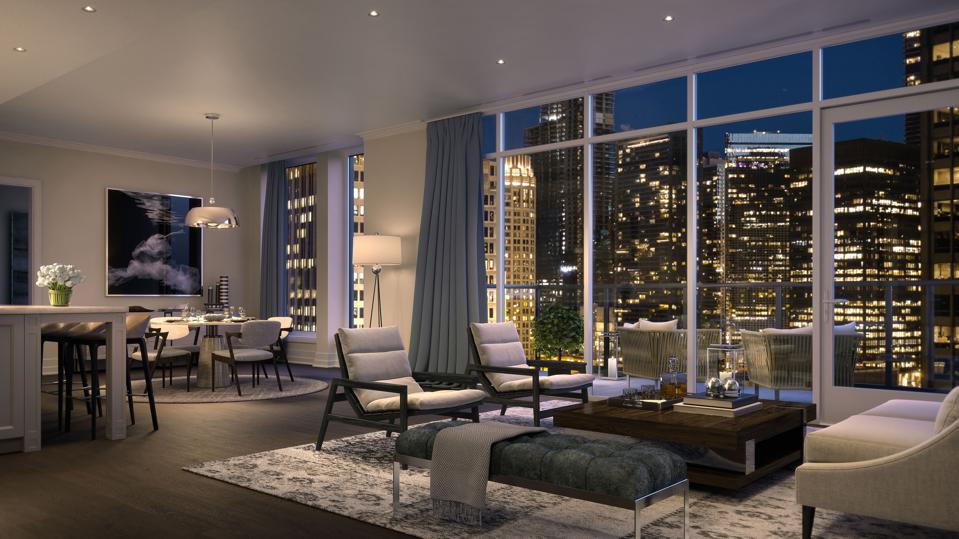 Condominium residences will range in size from 1,106 square feet for a single bedroom to 4,345 square feet for a four-bedroom. Additionally, prices will scale from the $900,000s up to $7.6 million. According to a 2019 Forbes article, each of these units will be equipped with an array of features consisting of 6.5-inch hardwood flooring, premium appliance brands like Wolf and Sub-Zero, and cabinetry by Bovelli Custom Millwork. A portion of these listings will also be accompanied by ceiling spas of 10 feet and higher. 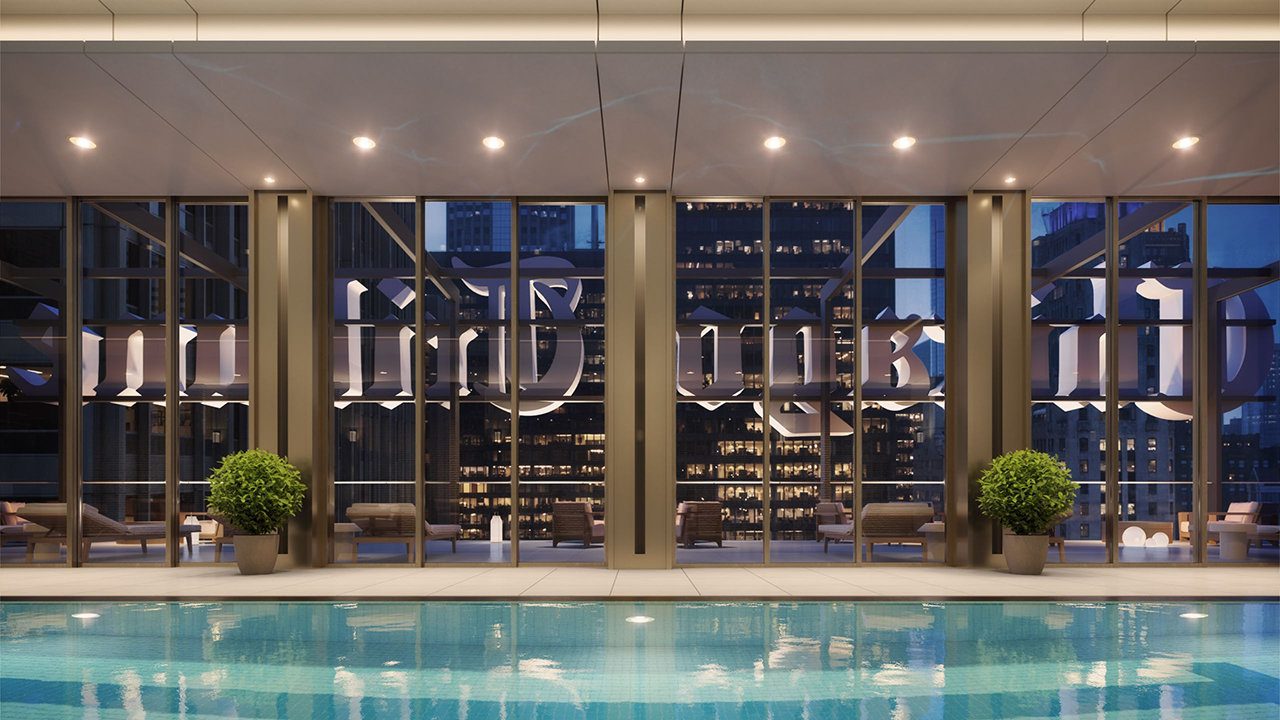 Residents will have access to a wide range of indoor amenity spaces, including a 7,000-square-foot fitness center and spa, a solarium, multiple dining and lounge areas, a kitchen, a billiards room, a driving range simulator, a co-working space with various meeting rooms, as well as a series of entertaining and event areas with a bar and prep kitchen. Most notably is a 75-foot-long indoor pool with expansive windows looking through the iconic Chicago Tribune sign. 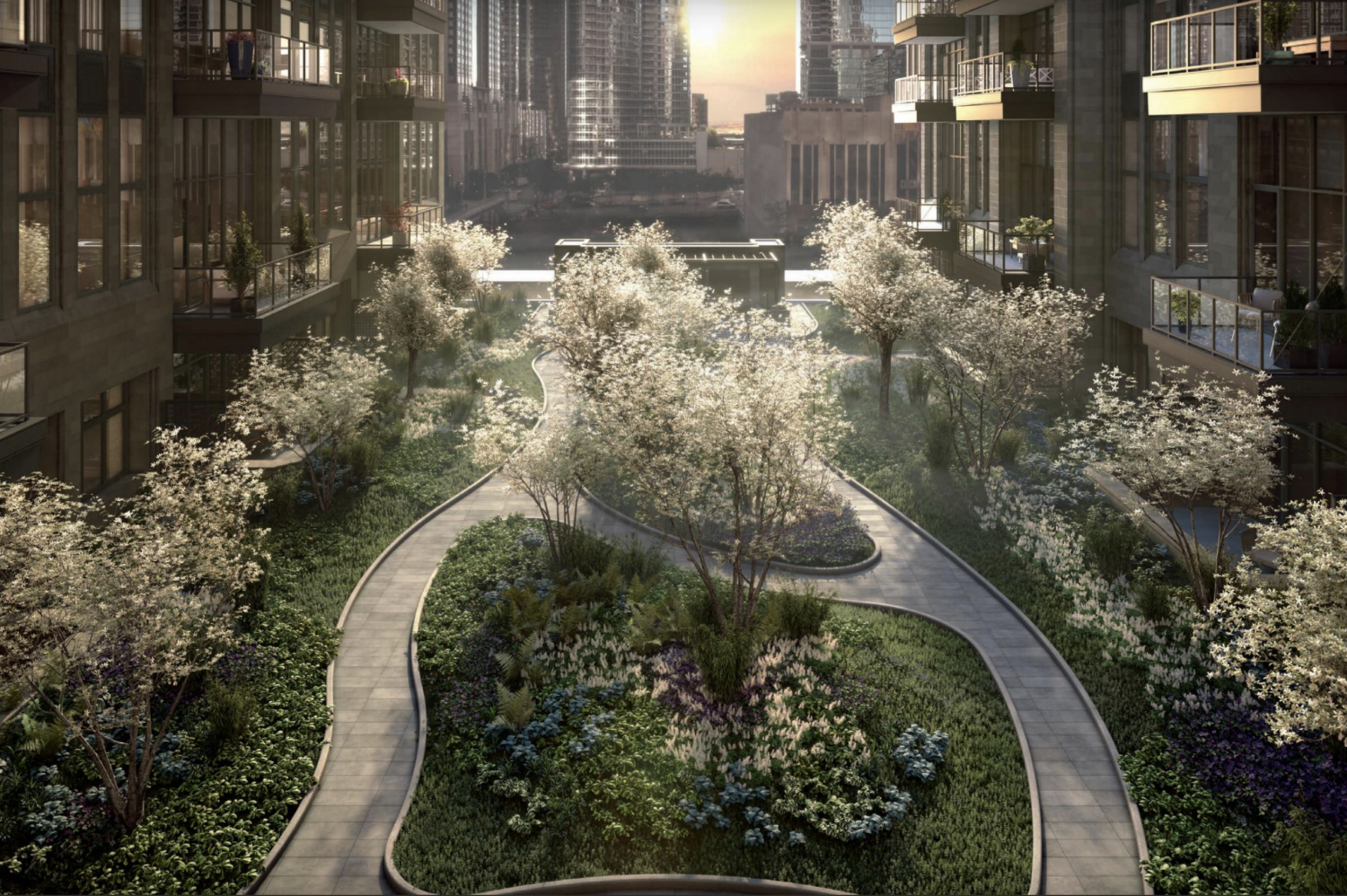 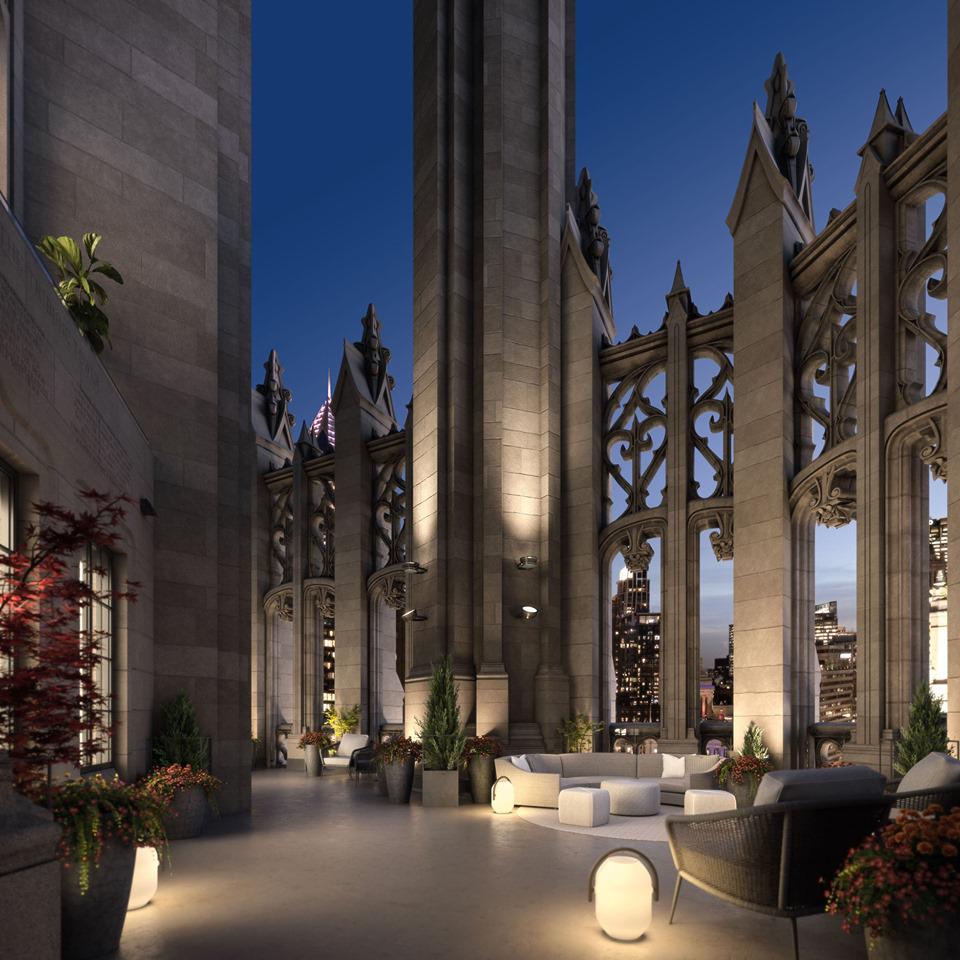 Outdoor spaces will comprise of a seventh floor deck with a terrace and grilling stations, a dog run, and a 1/3-acre park nestled between the two building wings. Lastly, the 25th floor will include The Crown Lounge and Terrace, from which residents can enjoy 360-degree city views and various amenities like fire pits, a chef’s grilling station, and an herb garden. 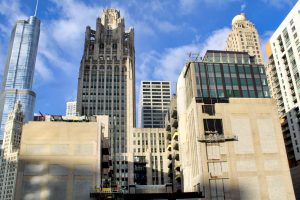 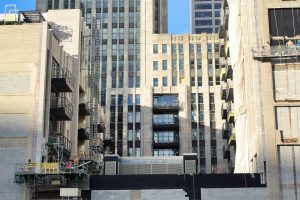 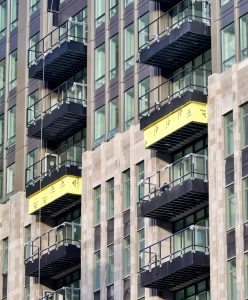 The tower lies within reach of multiple outdoor spaces for future tenants. The Chicago Riverwalk can be found via a five-minute walk south, while slightly further points of interest include Lake Shore East Park, Grant Park, and Navy Pier. 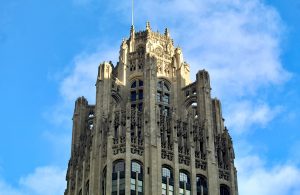 The Gettys Group is responsible for the interior design while OLIN is the landscape architect. Walsh Group is serving as general contractor for the roughly $150 million revamp, which is expected to complete next year.