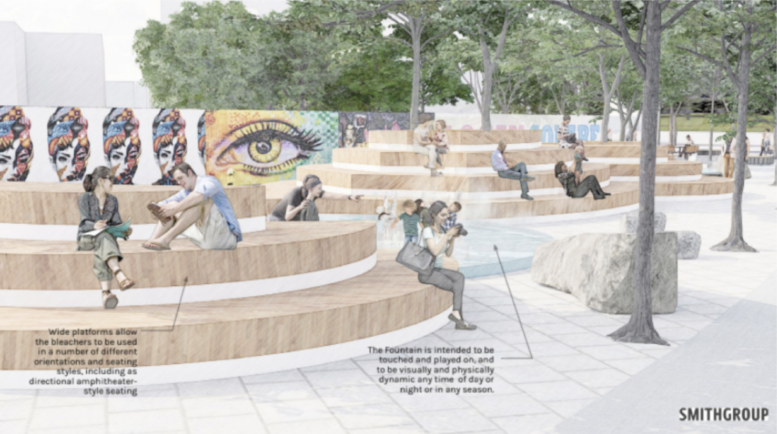 The Chicago City Council has approved the rezoning for two new public spaces at 2550 N Milwaukee Avenue and 2420 N Sacramento Avenue in Logan Square. Located at either ends of the recently completed Logan Apartments that replaced the long-running Megamall flea market a few years ago. The underutilized lots are being developed by the Chicago Park District in collaboration with Alderman Scott Waguespack and local community groups, all of which are working with the Chicago office of architecture firm SmithGroup on the design of both proposals. 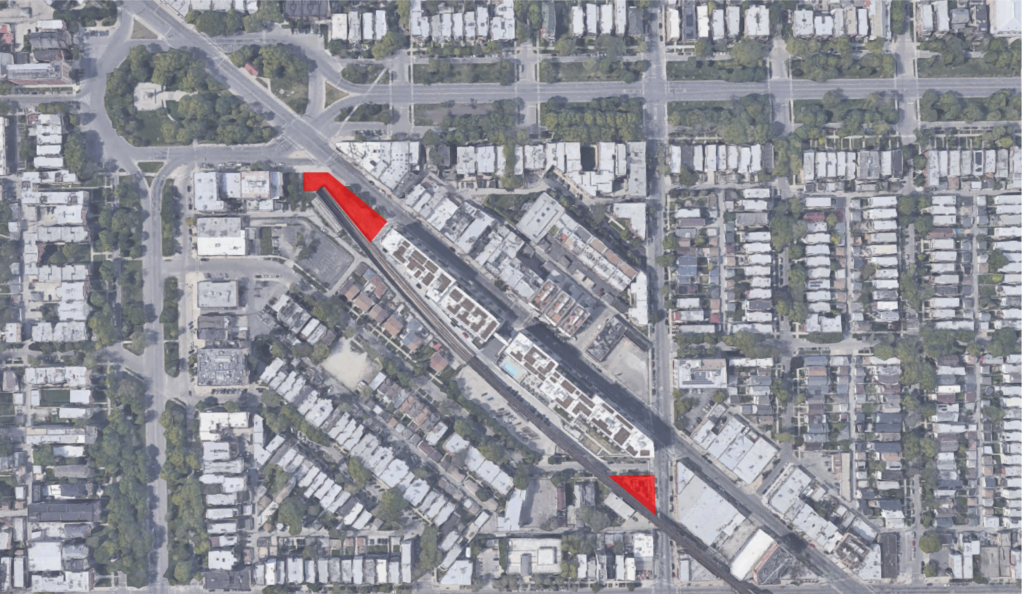 Site context plan of both properties via Google Maps 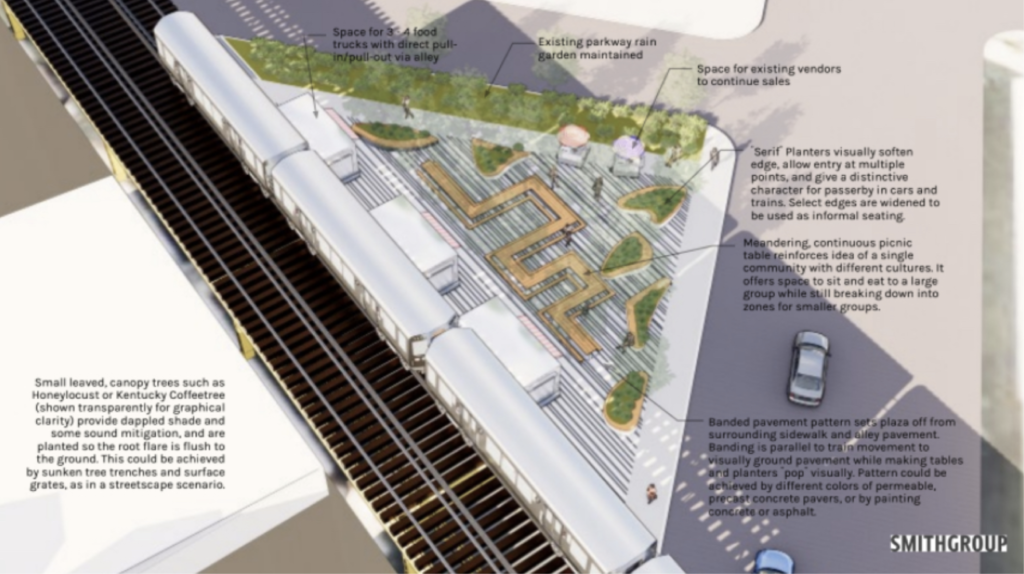 Rendering of plaza at 2420 N Sacramento Avenue by SmithGroup

Located directly across N Linden Place from the new Target store at the south end of the Logan Apartments, the site is currently a flat parking lot adjacent to a CTA building servicing the Blue Line tracks flying above. The roughly 7,000-square-foot lot will become a new food truck plaza with the capacity for up to four trucks along with an area for many of the neighborhood street vendors to set up. Users will be able to enjoy a continuous picnic table that emphasizes the element of community and plenty of planters with seating spread across the space. 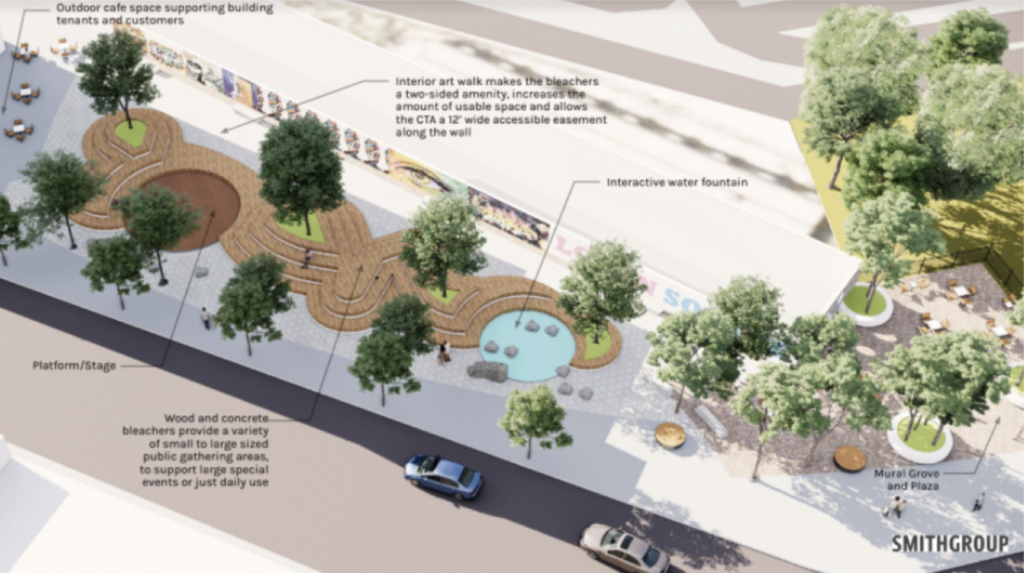 Located right off of the Logan Circle that will be transformed in the coming years, the larger 14,000-square-foot lot occupies the land north of the residential development and is intersected by the same Blue Line tracks that tuck underground on the site. While the design of the park is still being worked on and will go through a community outreach phase, early concepts for it show a play-fountain element, stadium seating platforms, landscaped planters, a performance stage, and a grove-like plaza on the north end. The wall surrounding the tracks would receive a few peep-holes to view train traffic, and the wall itself would be covered in art. 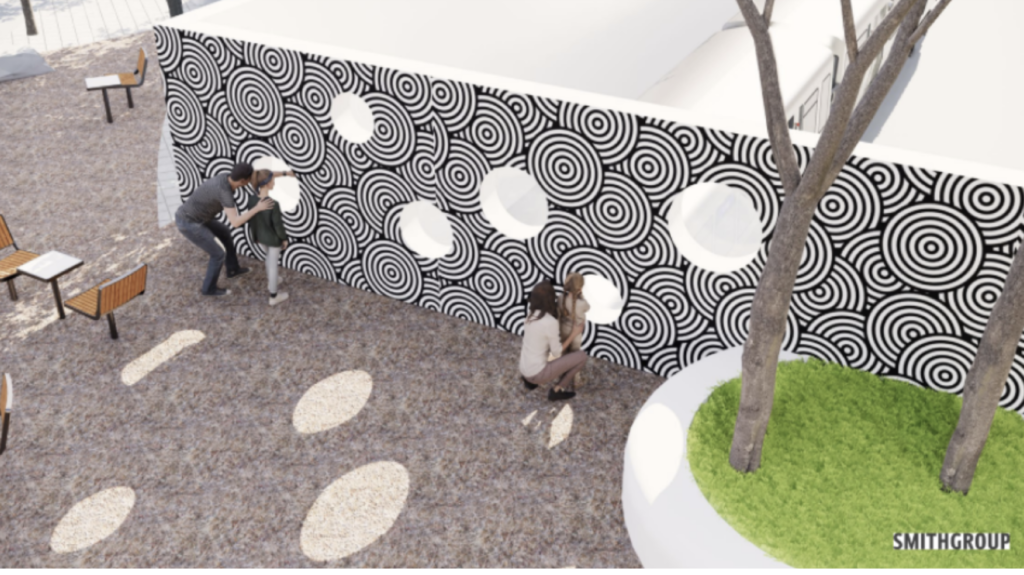 The approval converts the zoning for both lots to that of POS-2 Parks and Open Space District, a win for those who have been pushing for this redevelopment as early as 2008. The food truck lot on Sacramento Avenue will be first to be built with a cost of around $80,000, of which $53,000 has been secured with hopes of it opening before the end of the year according to Block Club. The larger park on Milwaukee Avenue won’t begin construction until at least next year at the earliest, with Alderman Waguespack pursuing city funding as both properties land in a TIF zone.