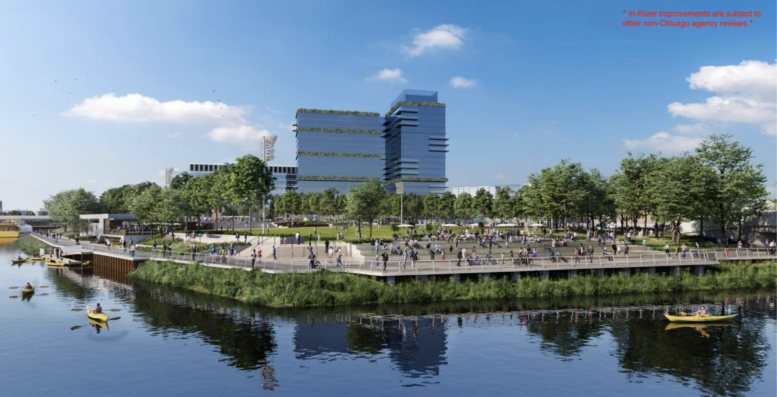 Rendering of new park and parcel D.1 by HPA and Gensler

Further details and initial floor plans have been revealed for the next phase of Lincoln Yards near Goose Island. Building upon the initial information we covered this past December, developer Sterling Bay brought forward another informational presentation to the Chicago Plan Commission as it does not need any further approval. Designed by local firms Hartshorne Plunkard Architecture and Gensler along with Hoerr Schauft and Site Design Group on the landscape team, the project is expected to be completed in 2025.

Elevations of 1685 Throop by HPA and Gensler

The next phase of vertical construction at Lincoln Yards will begin to open in 2024 in phases through to the following year, the new details for the area dubbed ‘The Steelyard’ are as follows: 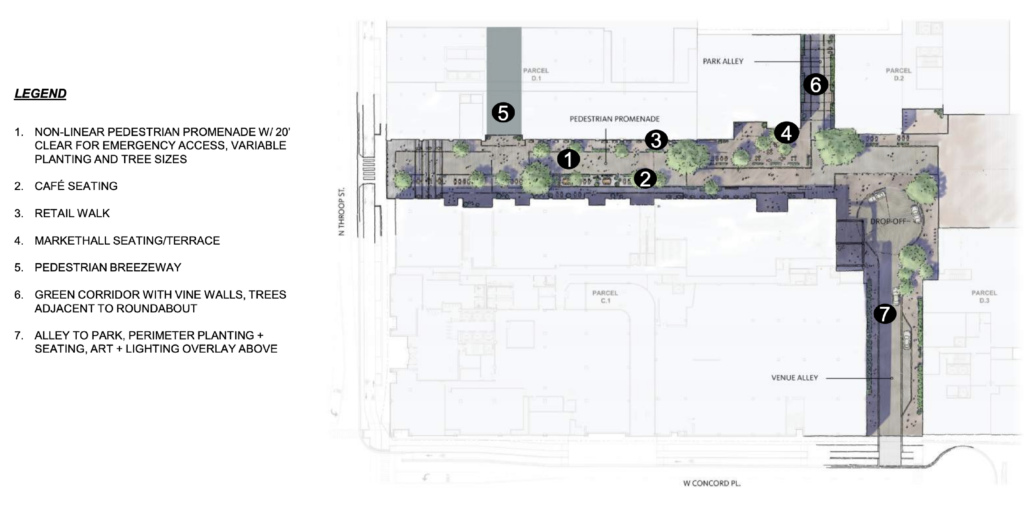 Site plan of The Marketplace by HPA and Gensler (note: numbers 6 and 7 are interchanged)

Expected to open in 2024, the pedestrian-oriented commercial area will utilize masonry, steel, wood, and concrete to pull from the city’s industrial past. A small road with a drop-off loop will stretch north from W Concord Place to ease traffic with the music venue, the area will be landscaped with trees, box planters, and feature outdoor cafes and small alleys leading to the new park north of the promenade.

Expected to open in 2024, the only office building in The Steelyards will rise 15 stories and 218 feet tall with an architectural height of 225 feet to the top. A small podium parking garage will occupy two of the lower floors with the west and north sides of the structure featuring retail space, with the exception of the office lobby and music venue entrance. The five retail spaces will conceal the large multi-story music venue which will offer a main stage and smaller secondary stage overlooking the main street. 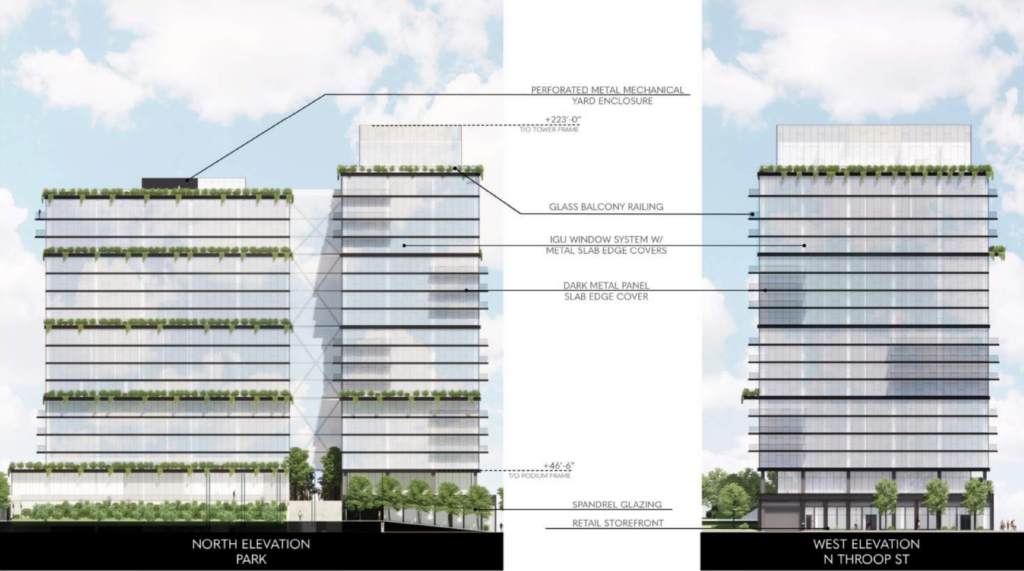 Elevations of parcel D.1 by HPA and Gensler

Expected to open in 2024, the development has not been named yet but has been further designed. The two-tower project features a large breezeway with pedestrian bridges connecting the two towers all the way up, with the tallest tower topping out at 223 feet. The lower level of the two will feature almost 10,000 square feet of retail frontage on the main street with entrances to the second floor, which will feature nearly 13,000 square feet of retail space with large terraces facing the park and main street.

Floor plans of parcel D.1 by HPA and Gensler

Featuring 350 residential units, the apartments will be split into 102 studios, 171 one-bedrooms, 73 two-bedrooms, and four three-bedrooms. Approximately 10 percent will be on-site affordable for a total of 35 residences, those will be split into 10 studios, 17 one-bedrooms, and eight two-bedrooms. Residents will get access to plenty of amenity spaces from a full-sized gym, terraces as the towers set back, and a rooftop pool facing east.

Floor plans of Market Hall by HPA and Gensler

Expected to open in 2024, The Marketplace will be connected at grade level to Parcel D.1. With a design similar to older retail buildings, the three-level building will feature basement-level back of house spaces, a marketplace level retail space and entry, as well as two raised park-level retail spaces with nearly a combined 10,000 square feet of commercial space and public restrooms. 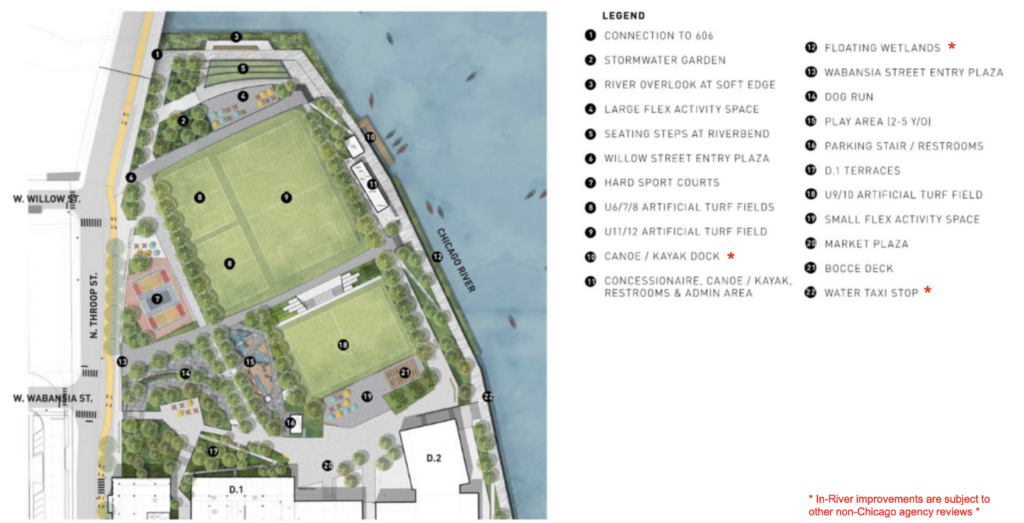 Site plan of the new park by HPA and Gensler

Expected to open in two phases in 2024 and 2025, the massive park will be mostly built at an elevated level above a large shared parking garage. The park will feature a connection to the 606, gardens, hard sports courts, artificial turf fields, bocce deck, dog runs, playground, floating wetlands, a water taxi stop, a small boathouse with kayak storage, a concession space, and restrooms as well as a boat launch on the river. 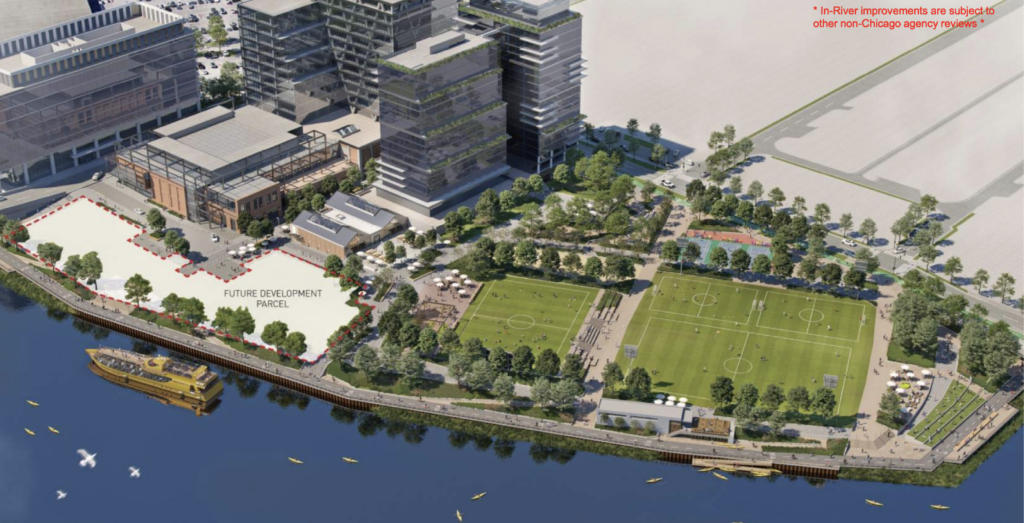 Rendering of the new park by HPA and Gensler

More is expected to open during these years including infrastructure improvements which YIMBY reported on in December 2021 along with the full presentation found here. The new details reflect the result of community feedback on the design and aims to create a $4.1 billion economic impact to the area upon completion.