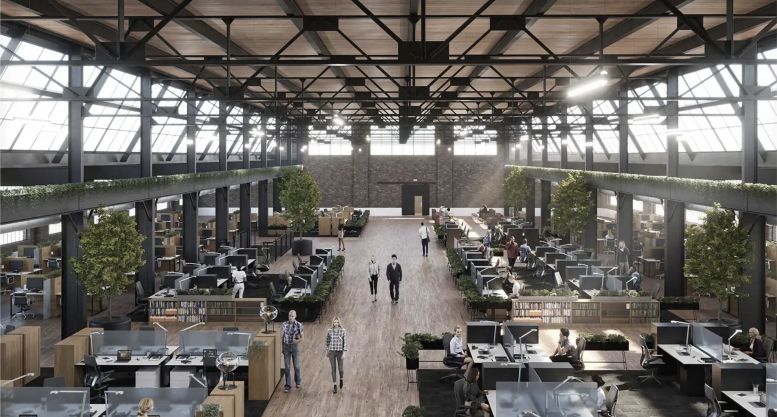 Interior rendering of phase one of The Terminal by RATIO

Final touches begin to take shape on the first phase of a new office development at 1334 N Kostner Avenue in Humboldt Park. Dubbed The Terminal, the project is the redevelopment of the old Pyle National Company manufacturing plant which had sat mostly dormant for many years, and is now being developed by the IBT Group along with Chicago businessman Joe Mansueto. The design is being led by local firm RATIO Design along with one of the nation’s leading preservation specialists MacRostie Historic Advisors. 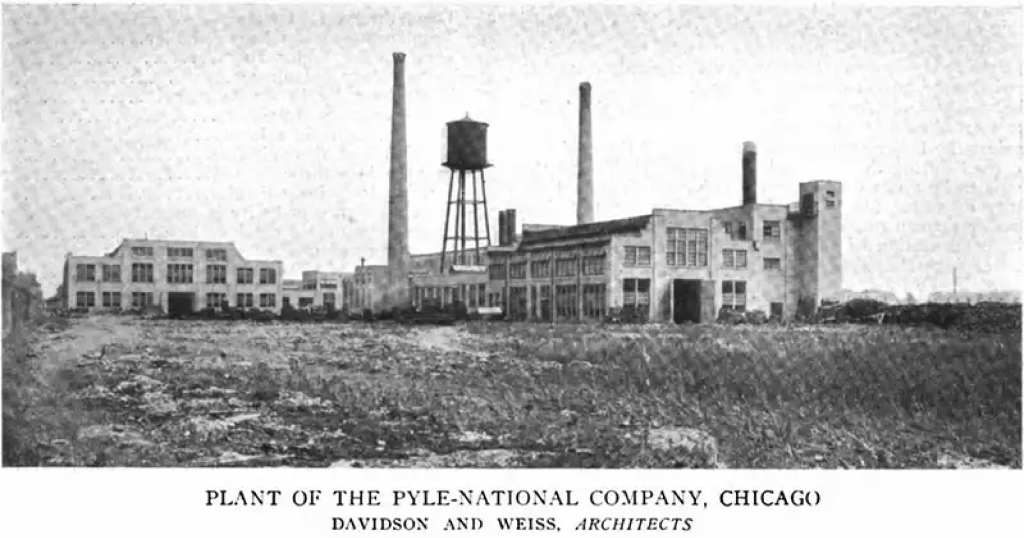 Historical image of the Pyle National Company factory via The Terminal

Founded in 1897 by Royal C. Vilas, the Pyle National Company became popular for its Pyle-O-Lytes, one of the most popular locomotive headlights which were introduced in 1913. Due to a federal mandate requiring all trains to have headlights in 1915, the company grew rapidly and in 1916 moved into the new plant. By the 1930’s Pyle had provided the lighting for many Chicago icons including Soldier and Wrigley Fields before departing the city in 1992. Most recently, the Davidson & Weiss designed building was added to the U.S. National Register of Historic Places in 2021. 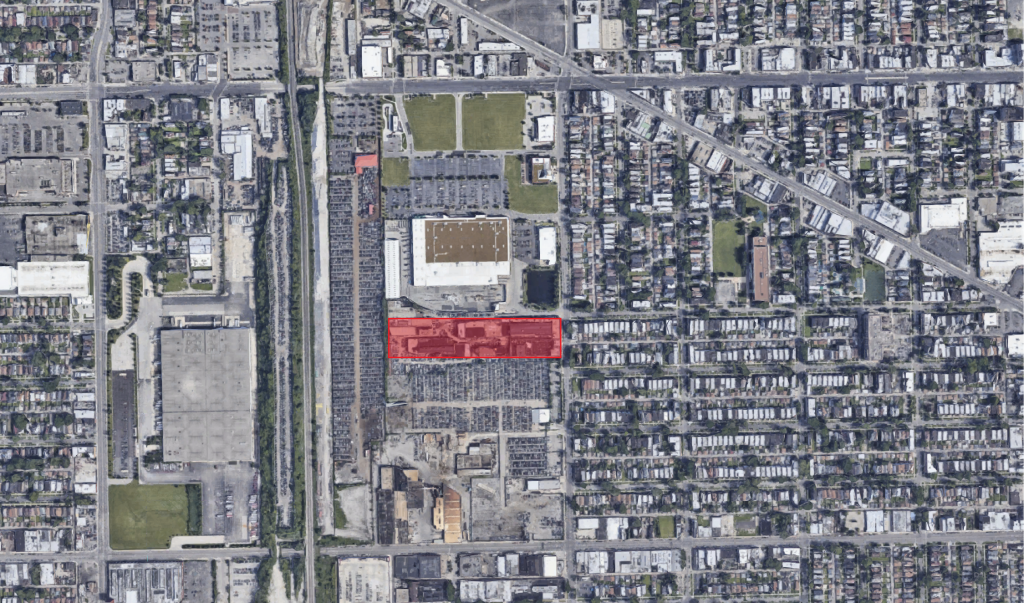 Surrounded by lots full of cars on their final days, the two-story existing factory building is bound by N Kostner Avenue to the east and W Hirsch Street to the north. The project is split into two phases and will bring a total 250,000 square feet of ‘creative workspace’ to the growing area in a well-landscaped. pedestrian-friendly campus. Phase one is well underway and will welcome some of its first visitors this coming week as it hosts an in-person business symposium. 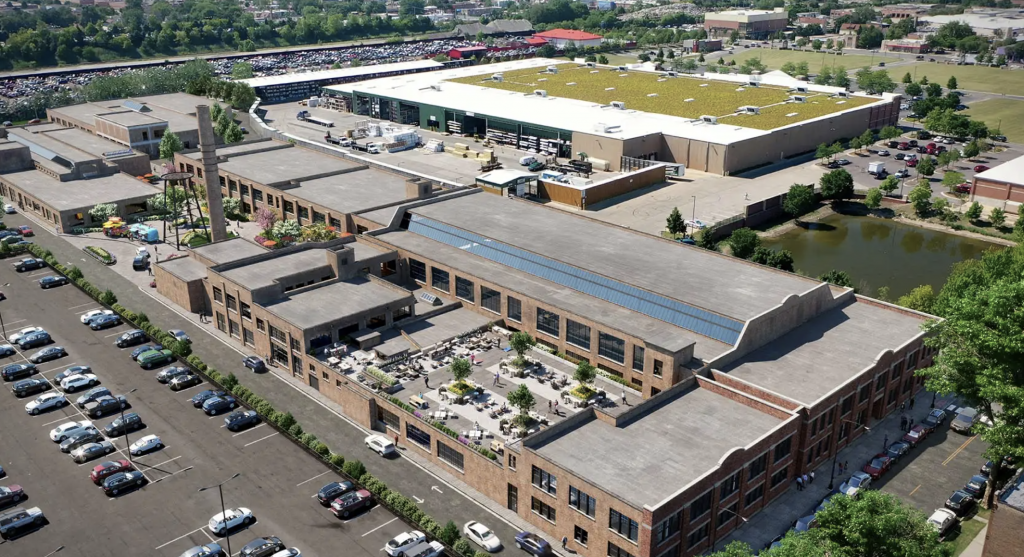 Overview rendering of The Terminal by RATIO

Phase one involves the rehabilitation of the main factory building which will provide 175,000 square feet of office space divisible into offices as small as 5,000 square feet. The massive space features a shared lobby with a monumental staircase and exposed industrial structure throughout. While all spaces offer ceilings over 10 feet, the second-floor bay space stretches as tall as 32 feet and can house an added mezzanine for extra floor space.

Site plan of The Terminal by RATIO

Phase two consists of two adjoining buildings on the west end of the site and their respective site improvements. The first is called Terminal B and sits on the southwest corner of the complex, promising 32,000 square feet of space and is being marketed towards a single or mixed-use identity. The second building called Terminal C will similarly bring 25,000 square feet of space to the northwest corner of the project and both will be connected via an outdoor green passageway. 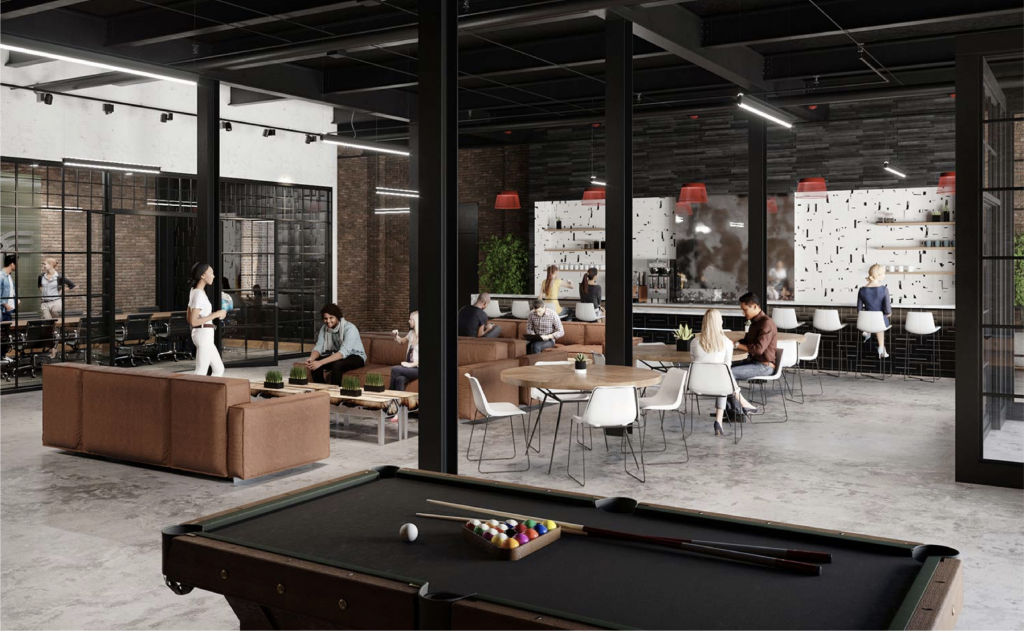 Amenity space rendering of phase one of The Terminal by RATIO

A central gathering space between the three buildings will be created by demolishing an old storage shed but preserving the old smoke-stack and water tower base as decorative elements. Other amenities for future workers include a food truck lane, hydroponic gardens, various private and public roof decks, and picnic areas. 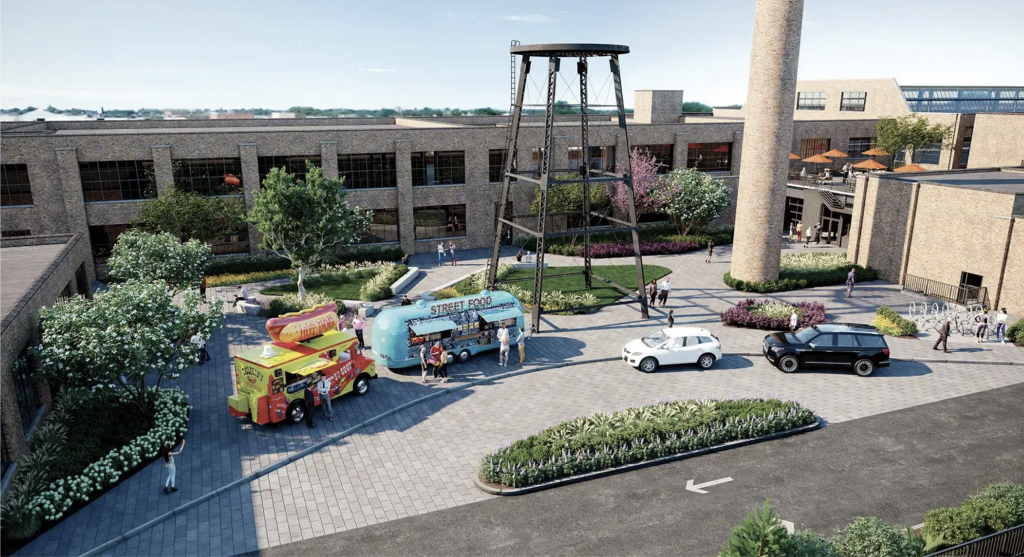 The project was kickstarted by Joe Mansueto himself with a $50 million investment and a collaboration with the city’s Invest South/West program. Phase one of the project will wrap up work this year, but no news on future tenants has been released.