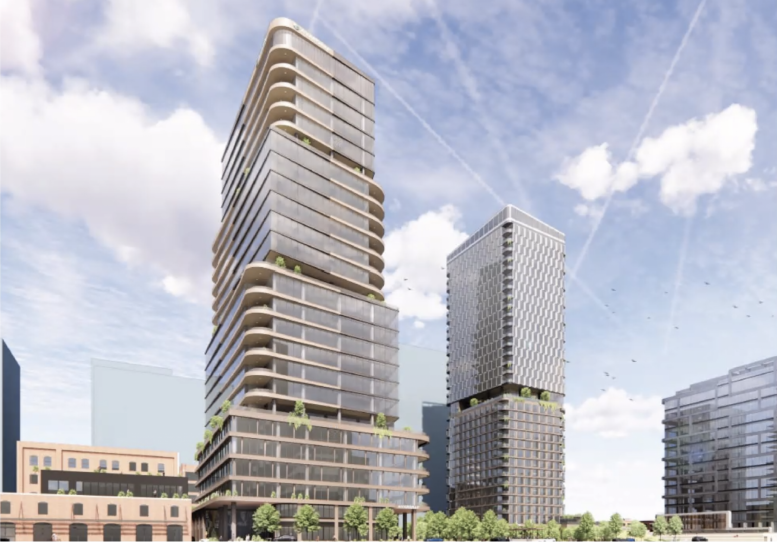 Updated massing of 315 N May Street by ESG Architects

Overall the massing of the buildings remained the same, but the form of the 25-story, 410-foot-tall office tower on N May Street saw the most change. The changes were made due to the lack of sunlight that would reach the 35,000-square-foot park at the base of the two towers which W Carroll Avenue cuts through. To allow this, the tower will see a decreased footprint and a change to the previous offset box design, the building will now rise with tiers that get smaller as it climbs allowing for more sun to reach the base, with the changes 650,000 square feet of office space will still be offered at this location. 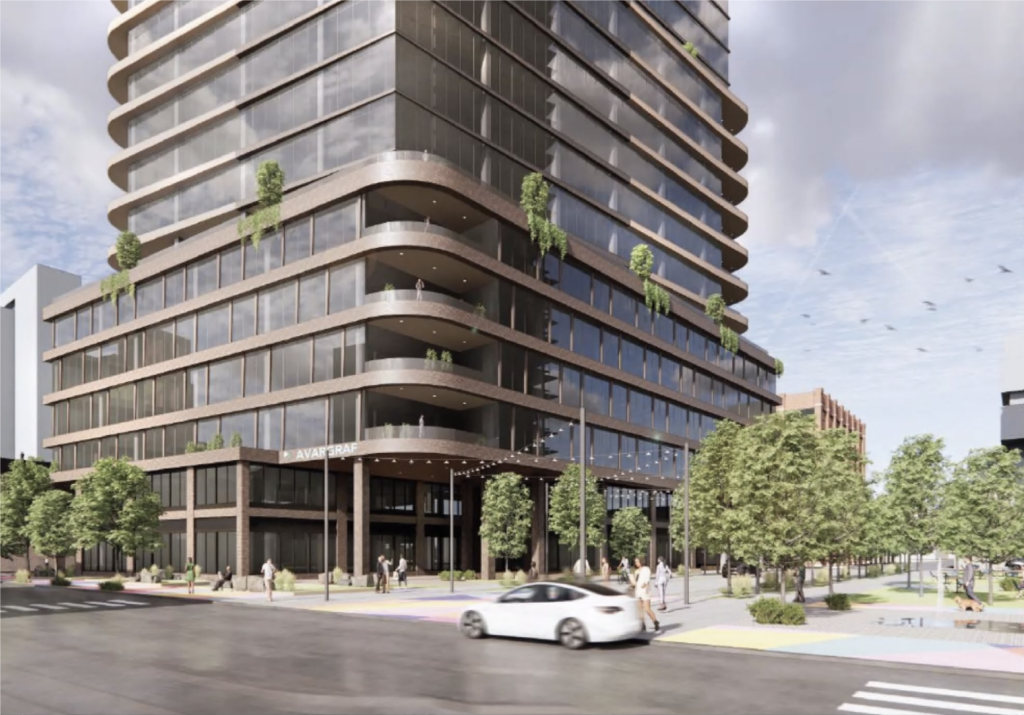 The 33-story, 369-foot-tall residential tower on W Carroll Avenue had no changes to its massing, however more details were released. The development will bring 377 residential units to the site of which 20 percent will be dedicated to on-site affordable housing, although not fully designed the developer will continue to work with the local community to revise their design. The units will be split between studios, one-, two-, and three-bedroom apartments with designer finishes. 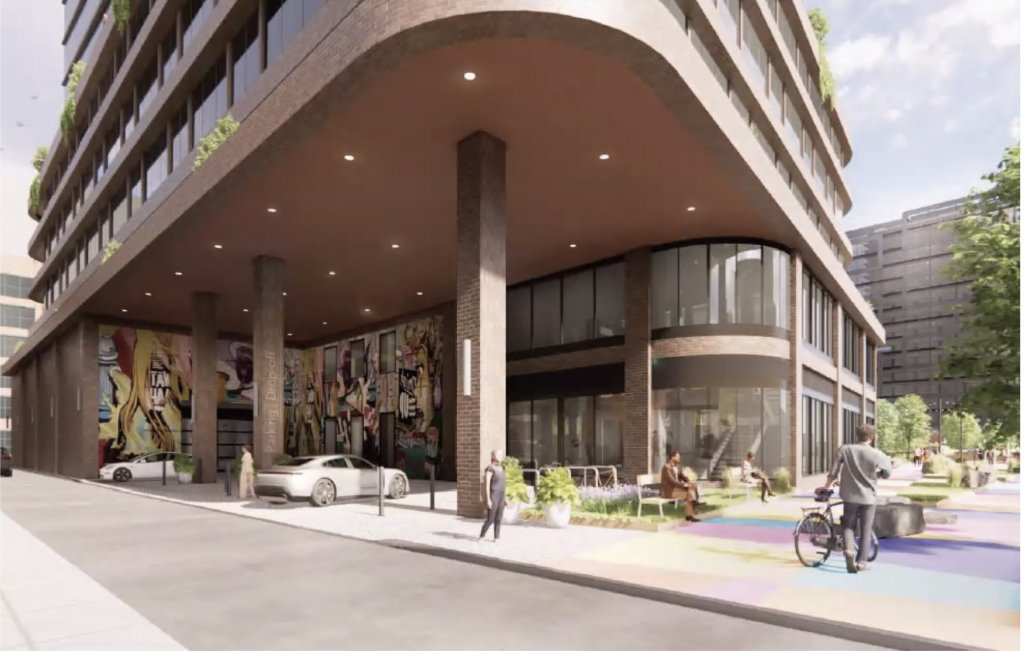 Parking in the towers was perhaps the most pertinent comment the designers received in their first meeting. Because of this, both towers have fully moved their parking below ground as opposed to being in the podiums as previously planned, leaving the podium spaces to be activated. The residential tower will now house 96 vehicle parking spaces underground with the office tower housing the remaining 184 spaces. The change also allowed for an inset vehicle drop-off area to be cut into the base of the office tower which the developer hopes will help activate the base. 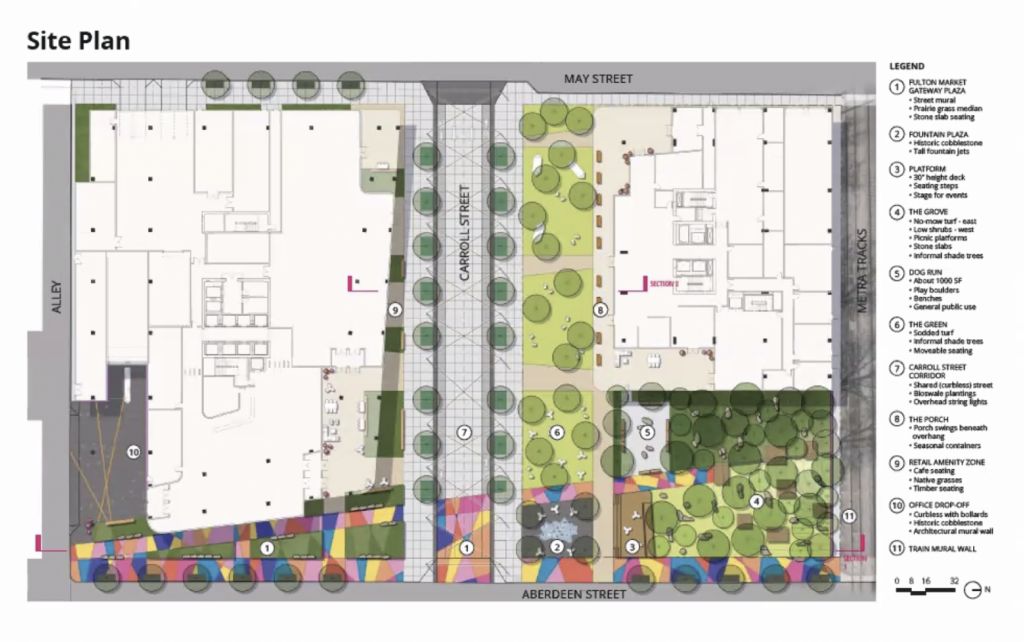 Revisions to the park surrounding the two buildings were also made, slightly increasing in size. Landscape design firm Confluence took the committee comments on its usability and updated its flow and programming. The wedge-shaped park will now feature a prominent art walk with decorated sidewalks that draw visitors onto the site. The walk culminates with a large berm up against the existing Metra tracks which is meant to shield the view of the train while reminding visitors of the once common Illinois bluffs. Other features include a public dog run open to all, seating areas, and ease of activation of W Carroll Street with space surrounding it for farmers markets, street fests, and more. 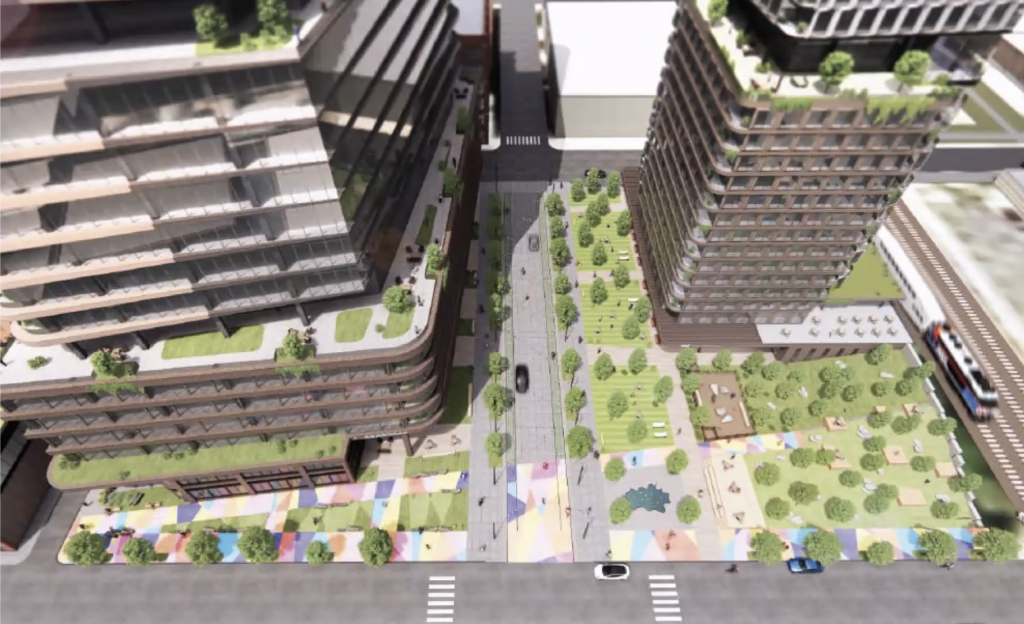 The project will continue to evolve and move forward through its permitting process. Local residents brought up various complaints from density, height, to how the meeting was formatted, although many voiced their support especially for the inclusion of a park space the area currently lacks. Trammell Crow, which recently finished the nearby Fulton Labs building down the street, hopes to break ground on both towers mid-2022 and complete the project in 24 months.