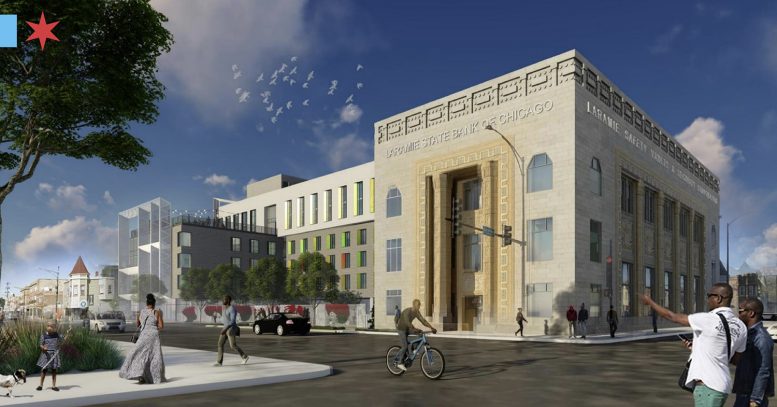 The newly-launched Committee on Design has reviewed a proposed mixed-use development at 5200 W Chicago Avenue in Austin. The property is a rectangular site fronting W Chicago Avenue. The parcel is bound by N Laramie Avenue to the east and N Latrobe Avenue to the west, with a public alley at its northern boundary. The site is currently home to the abandoned Laramie State Bank Building in addition to a series of vacant lots. Led by Heartland Housing Alliance and Oak Park Regional Housing Center, the proposal is the winning bid from the city’s Invest South/West Austin RFP. 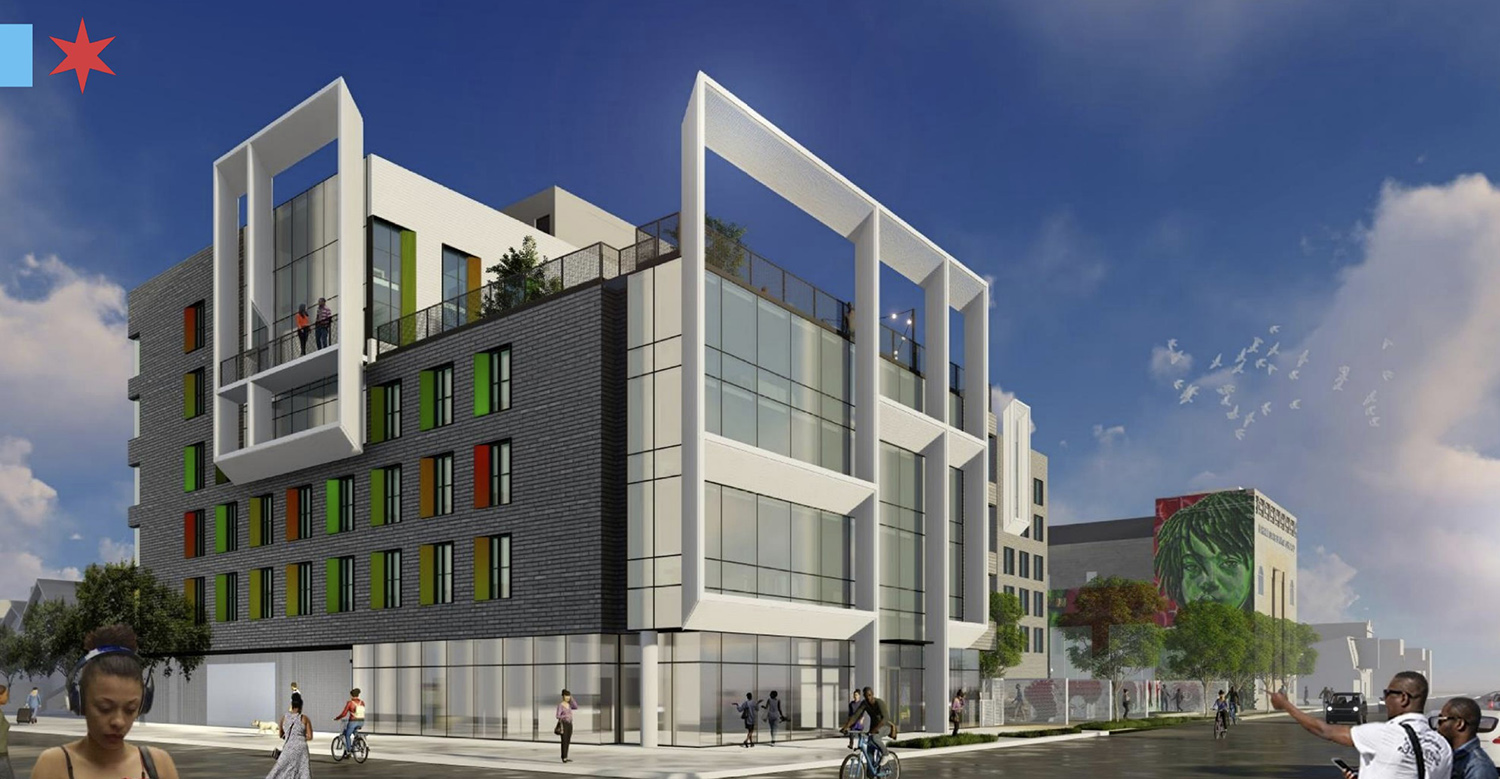 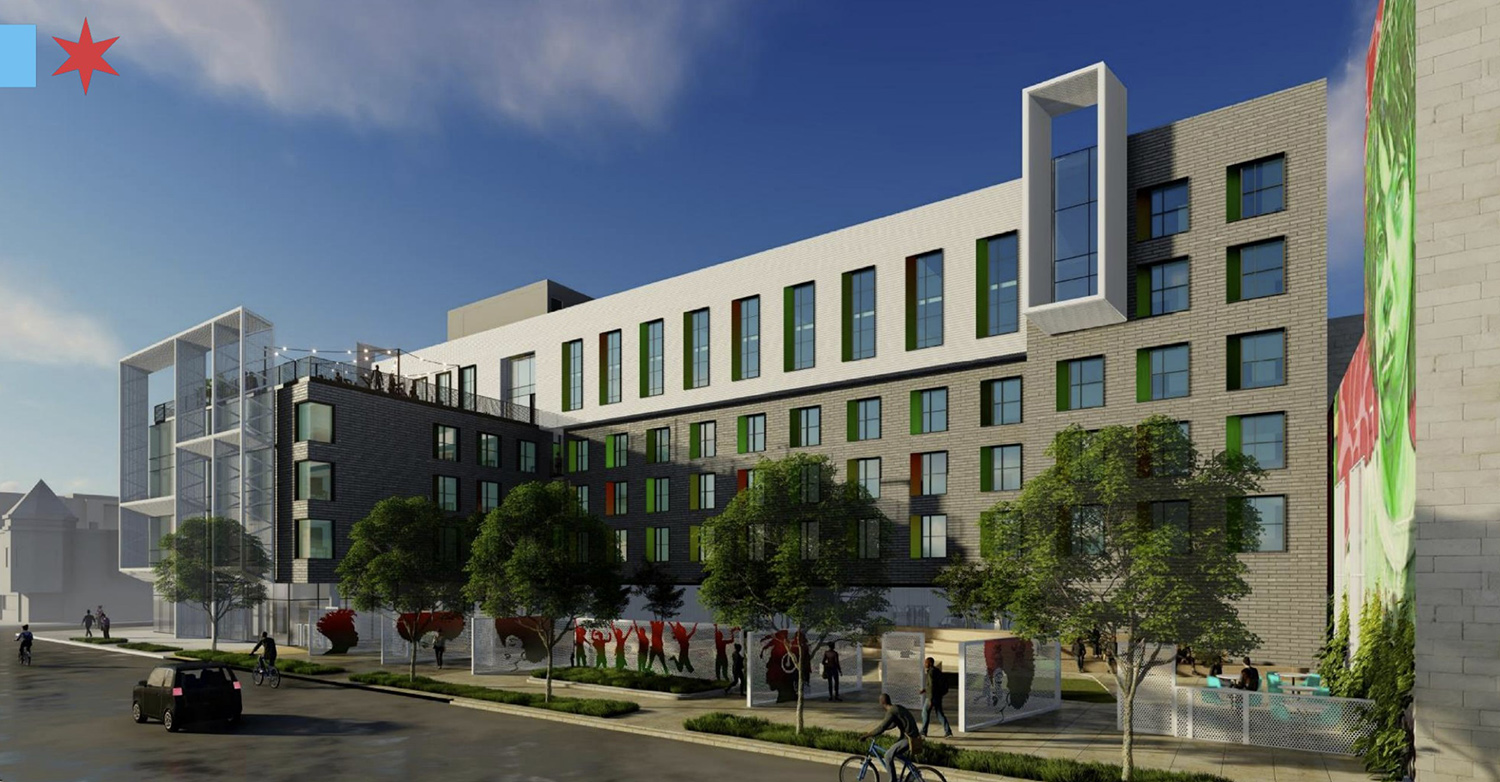 The design of the proposal looks to refer to the historic bank building in its design while suggesting a new future of development and activity for the neighborhood. The design team approached the project with the design principles of catalyze, socialize, and localize. The team is looking to create a catalyst for the neighborhood that sparks innovation, activates the area with a pedestrian-focused scale, and prioritizes the local community including through the establishment of a community-based non-profit board that will manage the reused bank building. 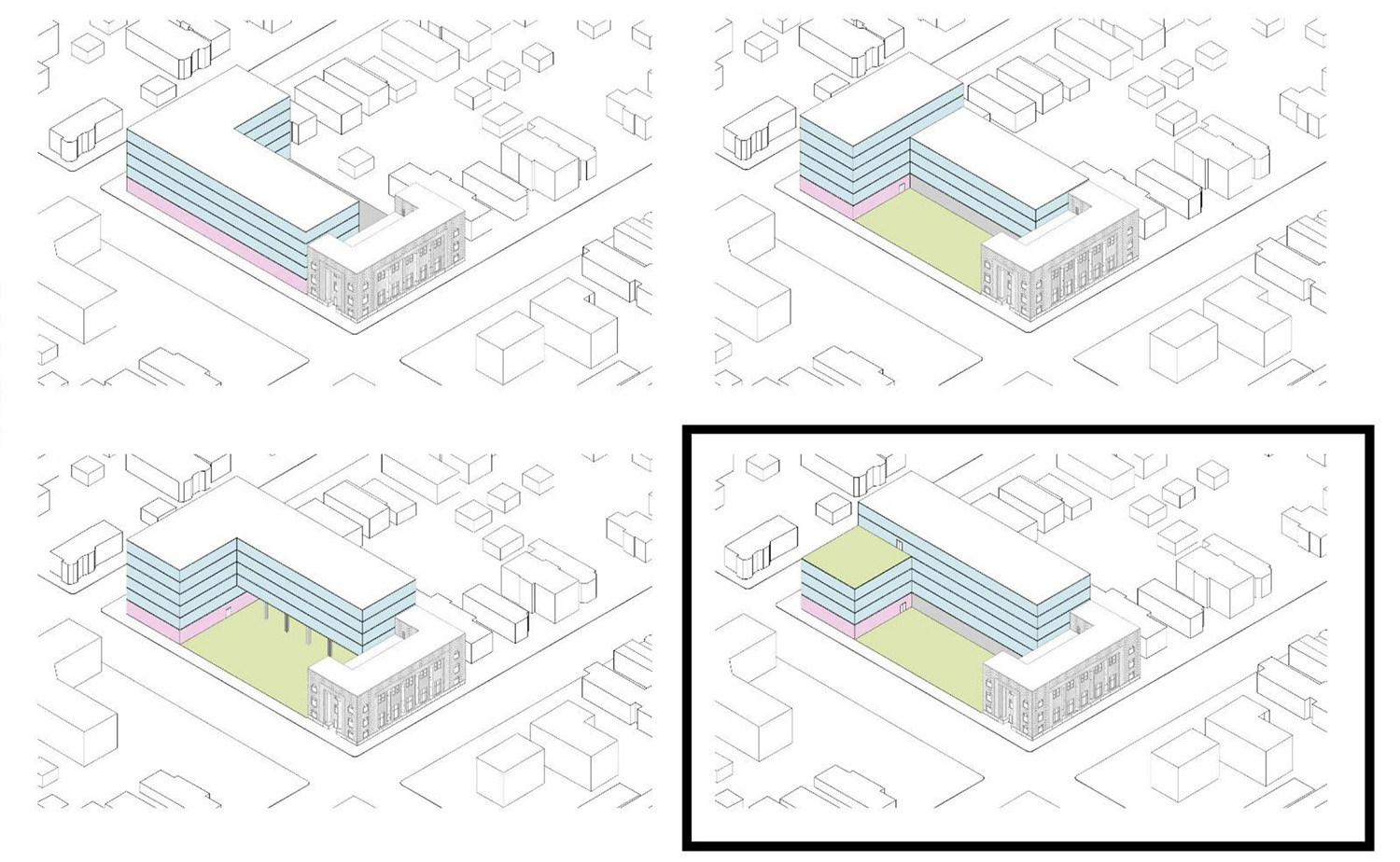 The massing of the new construction was studied through multiple versions, with the current one pushing the six-story mass to the rear of the site, opening up the front of the lot and connecting to the existing structure. The lower volume at the western corner creates an equal proportioned mass at the opposing corner, a dialogue between the 1920s and the 2020s. 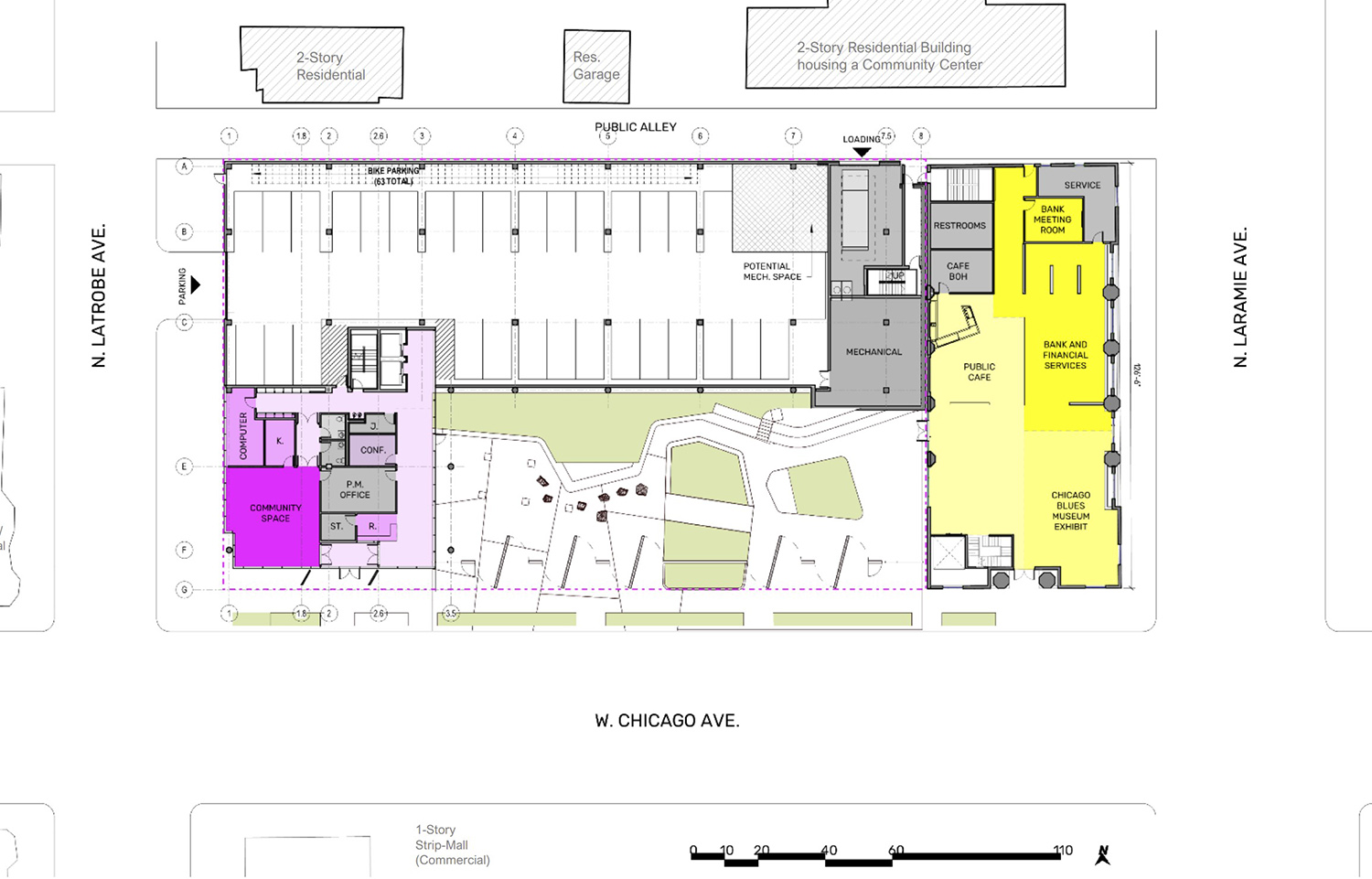 The ground floor holds the residential entry at the southern elevation of the lower massing. The community room faces the intersection of W Chicago Avenue and N Latrobe Avenue, with the entry hallway running alongside the plaza space between the entry and elevators. The design is being reviewed to flip the lobby and community room, having the lobby face the intersection and the community room facing the public plaza. Parking occupies the back bar of the ground floor.

The front facade is covered with a large brise soleil element. Located on the southwestern volume, the brise soleil references the dimensions of the bank building elevation. At times the brise soleil appears to be solid, while at other angles it is seen as translucent with perforated materials. 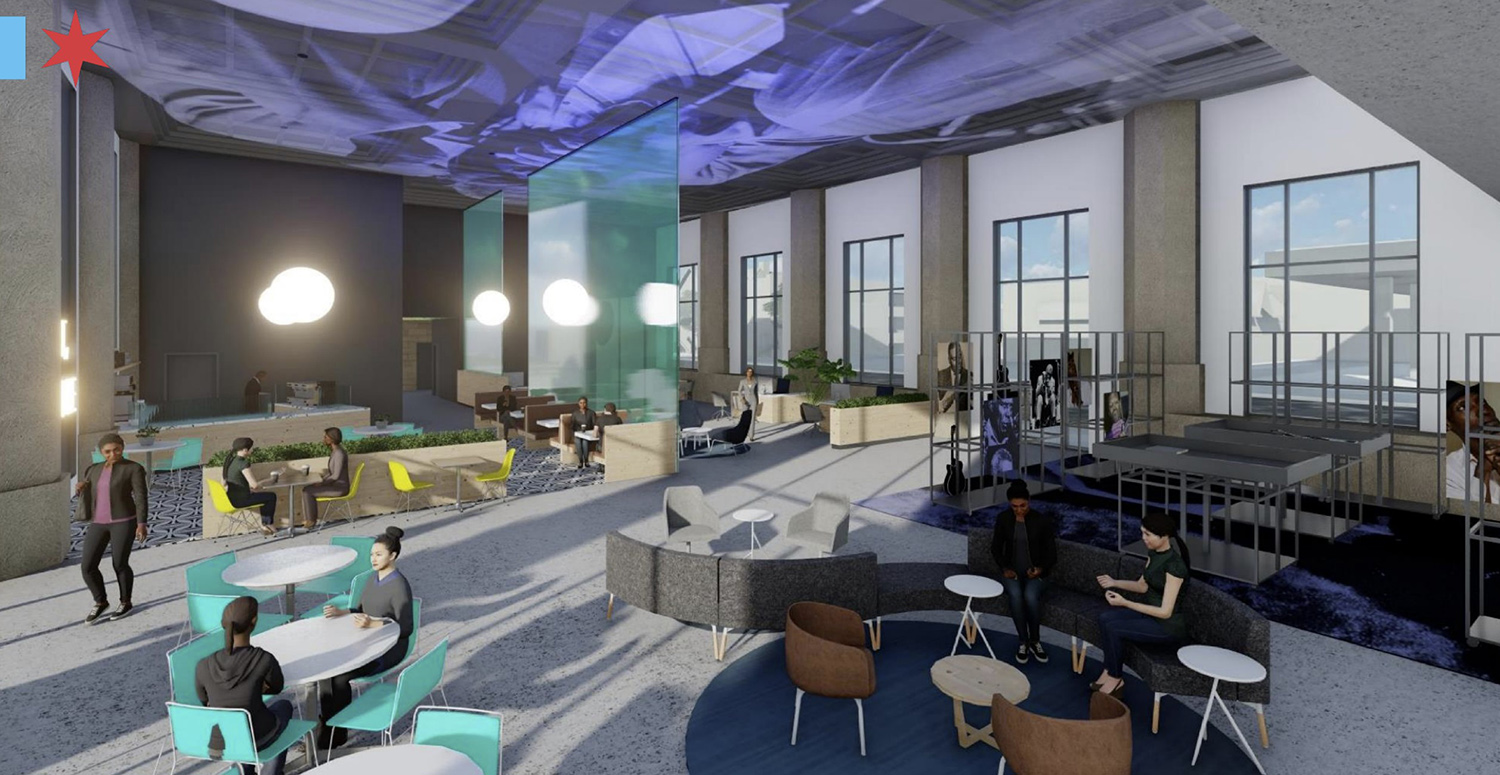 The historic Laramie State Bank Building will be restored and reopened to the public with a new bank, café, Blues Museum, and office/coworking space. Led by Latent Design, the new design will redevelop the interior of the main banking hall and upper floors. Currently in the state of an architectural ruin, the main lobby space will have a restored coffered ceiling under which the new programs of café, Blues Museum exhibit, and a new bank branch will be housed. 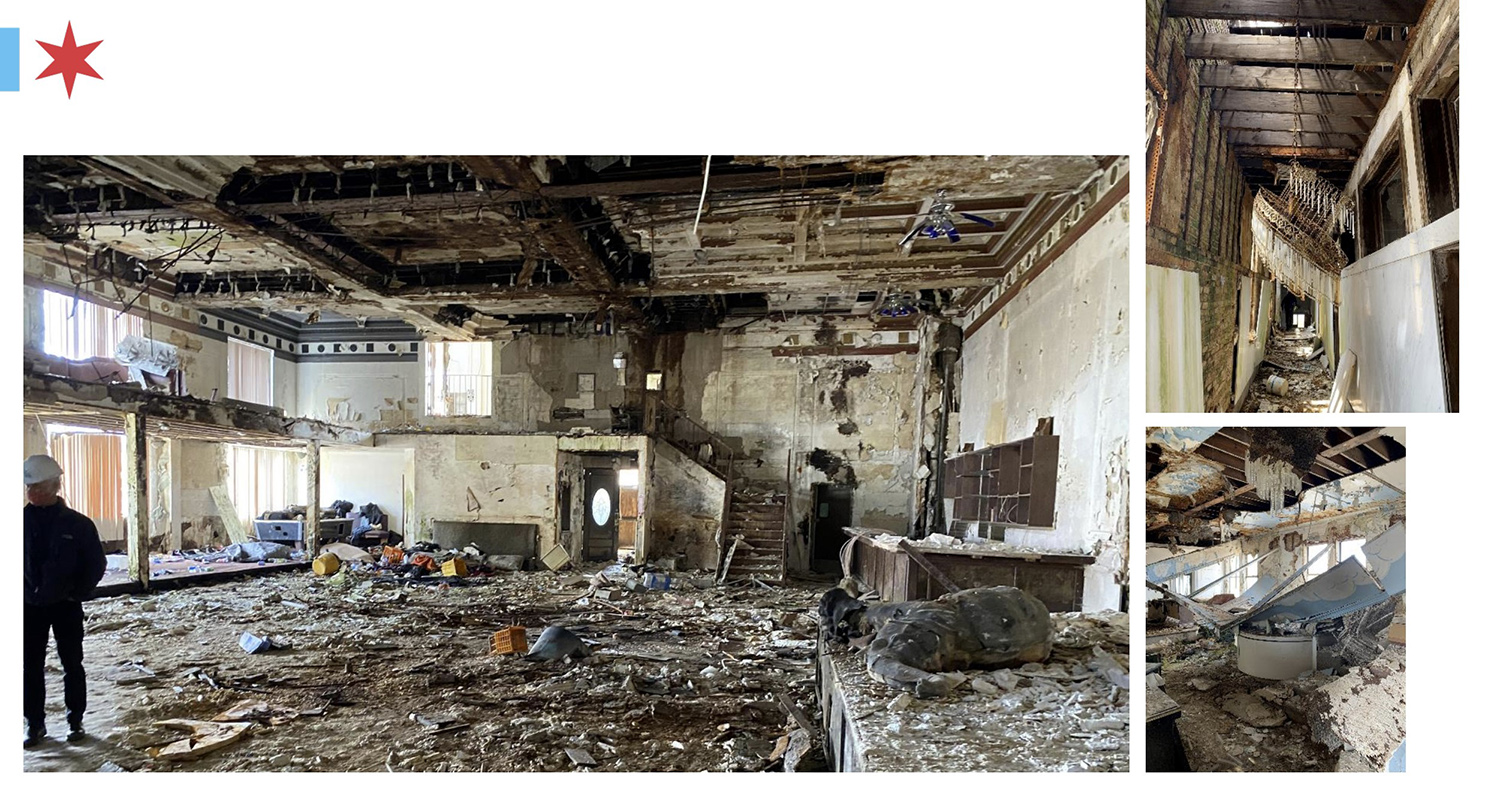 The new construction and former bank building will create U-shape on the site, leaving the center middle portion open for a public plaza and green space. The plaza will be the fabric that connects new and old together and to the public. Pavings will extend into the sidewalk to welcome the public, while rotating screens will close off at night for residential access only. Public art will be featured on the screened gates as well as on the large blank wall of the bank building. The exterior space will offer green lawn spaces and plantings as well as seating opportunities and small areas to gather. 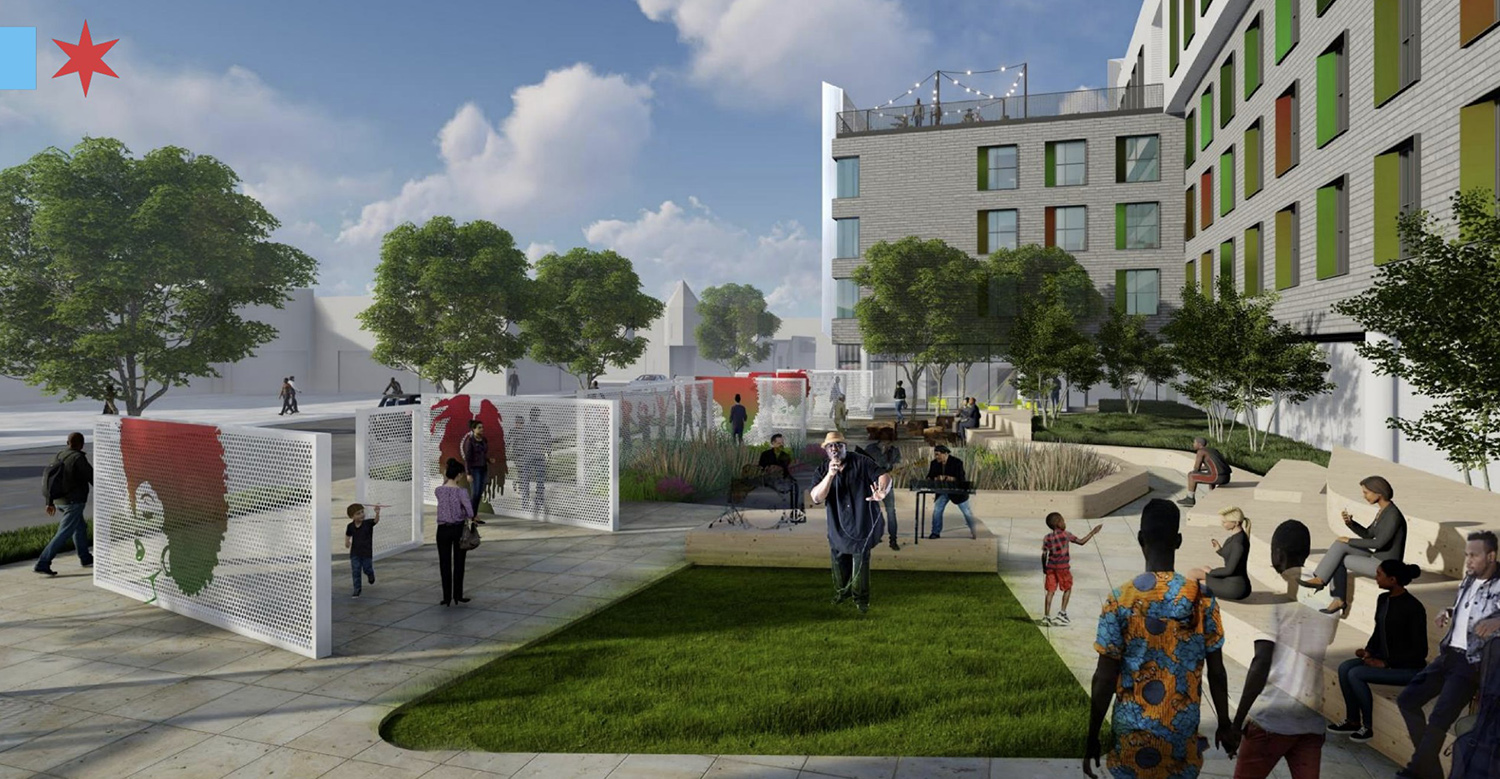 In the review period, the main discussion centered around activating the building around the public plaza. Jeanne Gang noted that it would be nicer to have active areas off of the park instead of having parking face the plaza. She suggested that the laundry and fitness rooms could be moved to front the plaza rather than being on the upper levels. Philip Enquist also commented that the blank wall covering the parking is not ideal for the exterior green space. 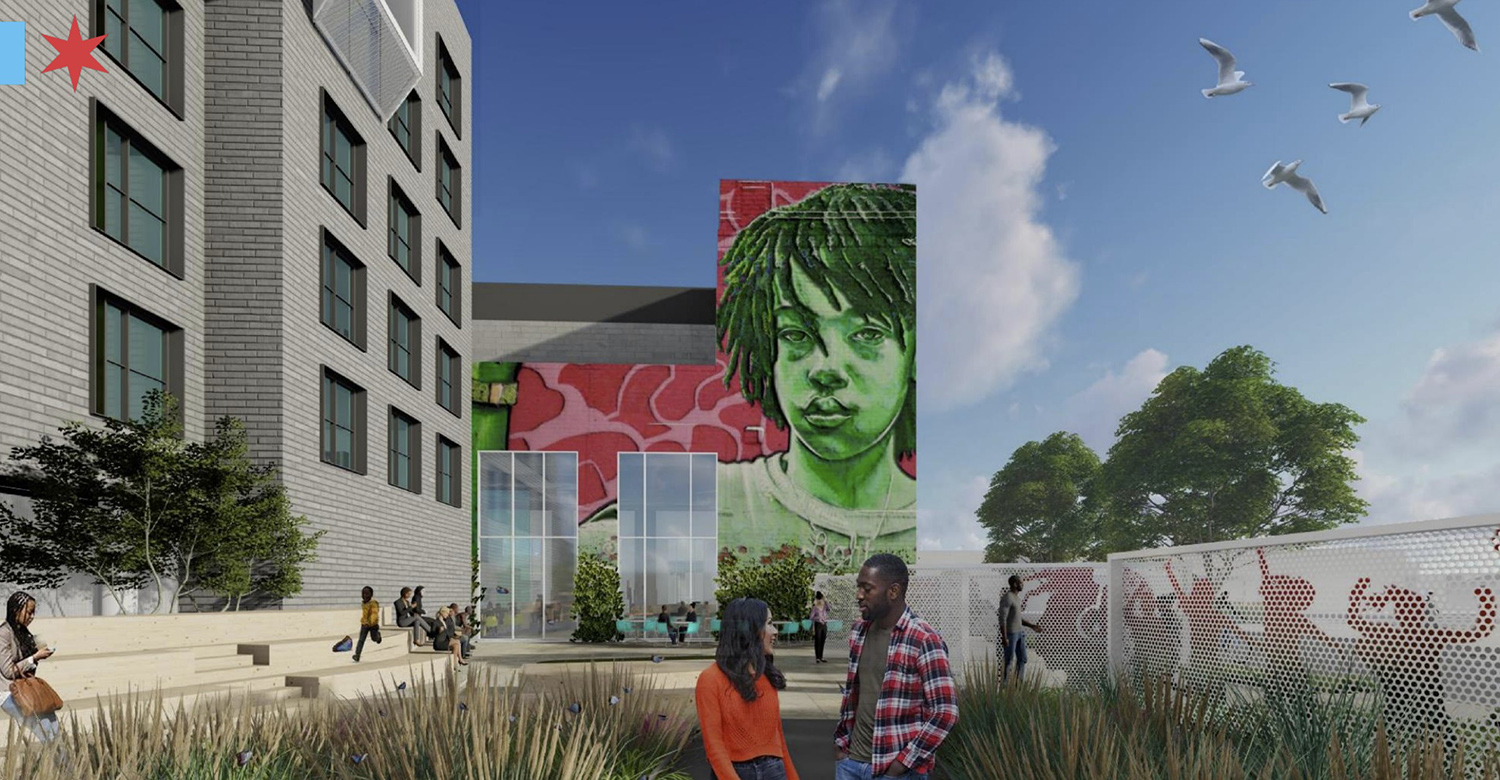 Leon Walker commented that he perceived a tension between whether the plaza is for residents or the public, saying that he understands the need for safety, but there is a desire to engage the public. Joe Valerio from Valerio Dewalt Train replied saying that the green space will be open to the public dawn to dusk, with the gates closing overnight to use it as a dedicated tenant amenity. According to Valerio, they can’t call it a truly open public space because of Department of Planning and Development (DPD) rules around how it’s defined. 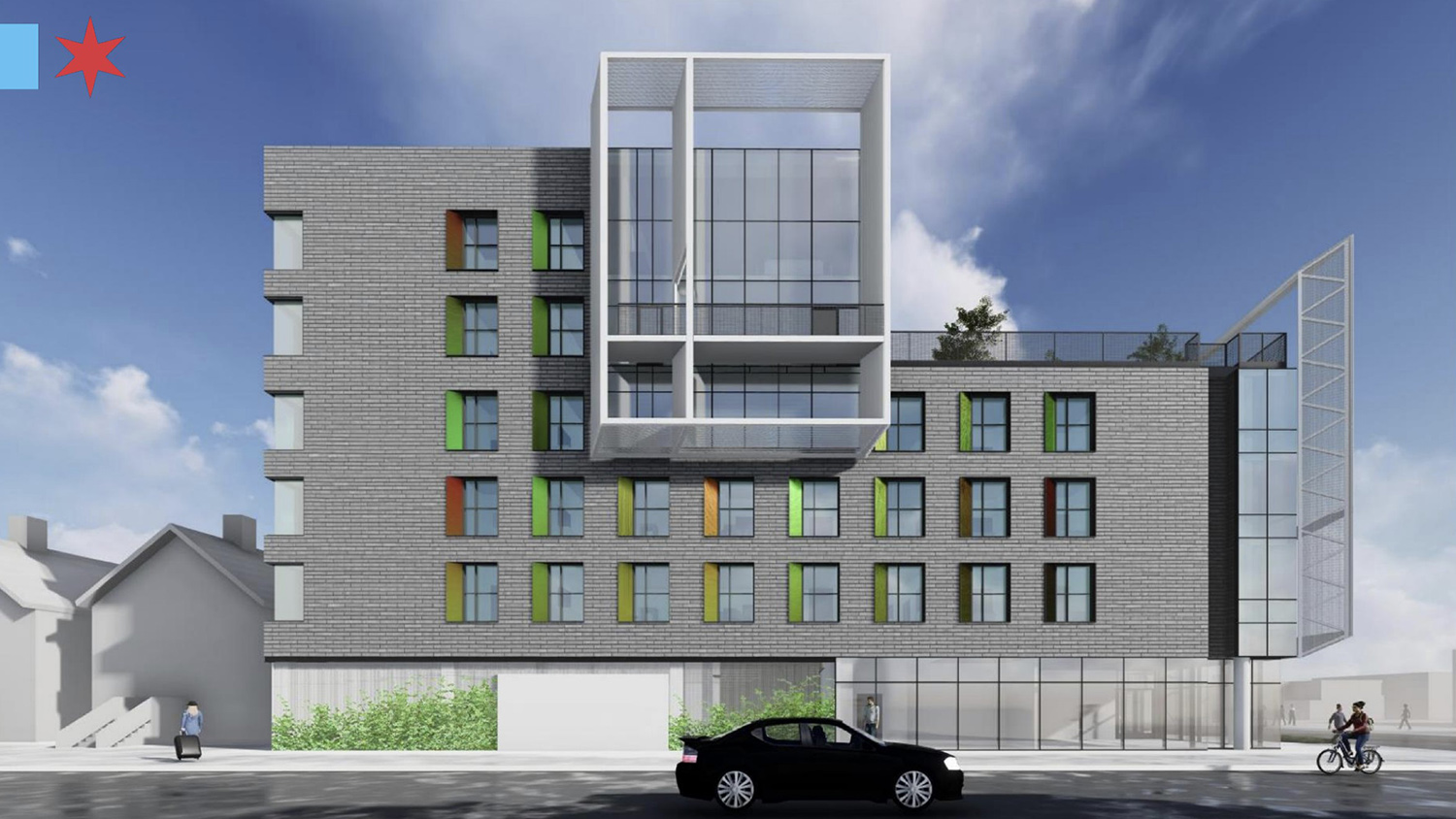 Catherine Baker commented that the residential massing on N Latrobe Avenue seems overbearing to the adjacent single-family homes, suggesting that that elevation should be revisited. Additionally, she said that the bike parking should be revised as well. In its current location out in the open of the parking garage, she implied that people wouldn’t feel safe parking their bike and that the bike space needs to be an enclosed room. Leon Walker suggested adding the bike room up against the plaza frontage, which Maria Villalobos agreed with. Joe Valerio responded saying that he agreed with the bike room comment, saying that they would revisit and try to figure out creating an enclosed bike room. 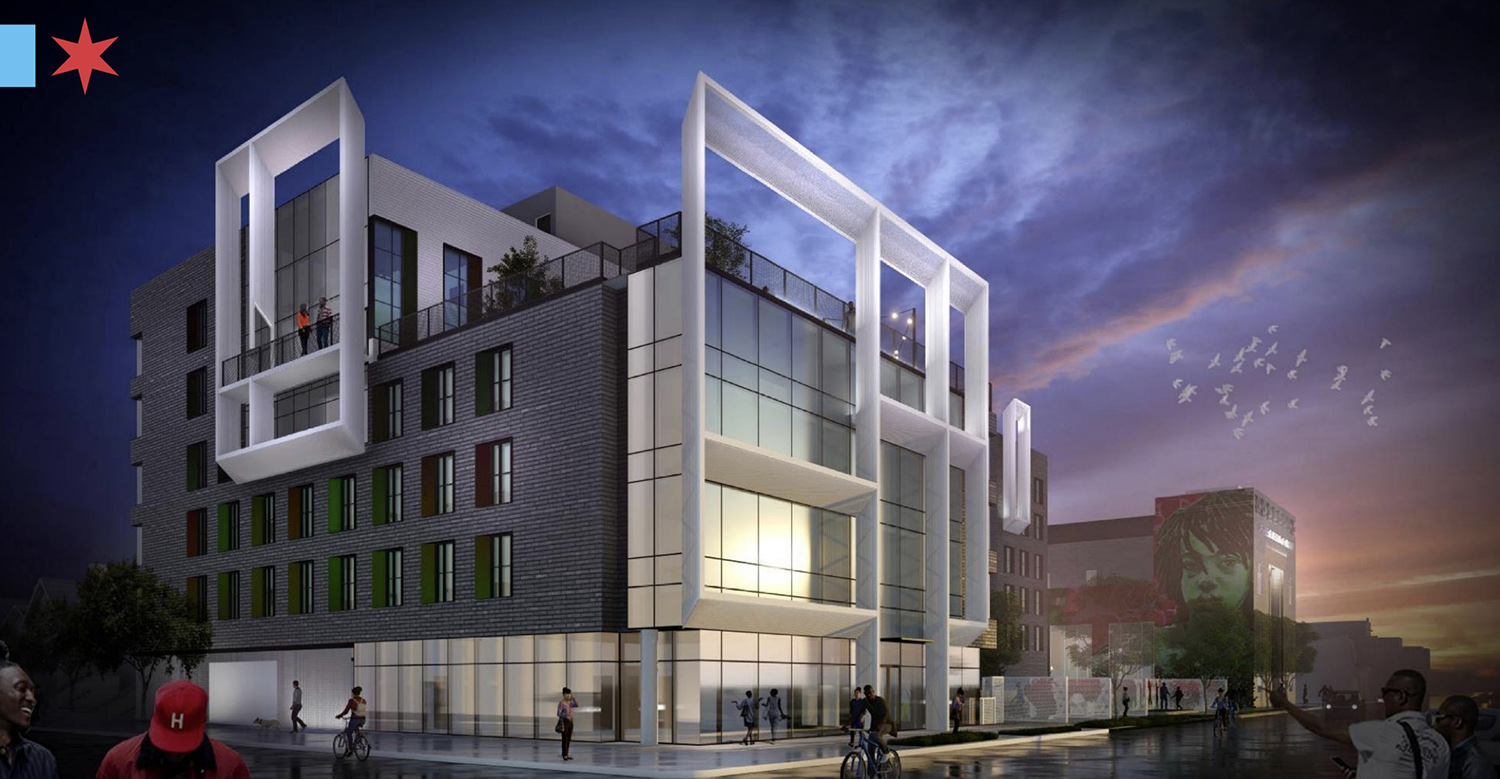