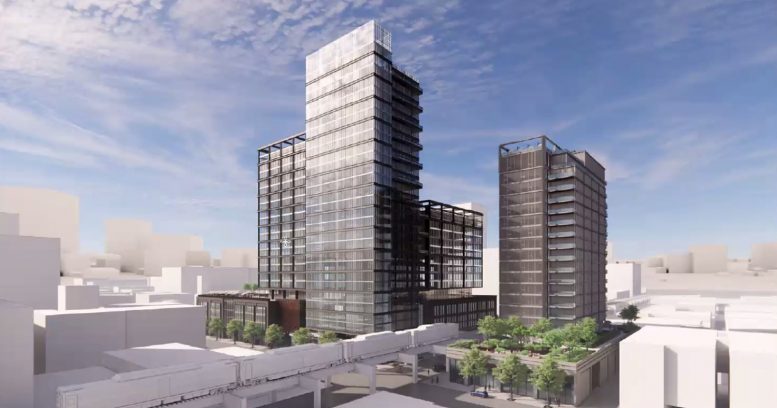 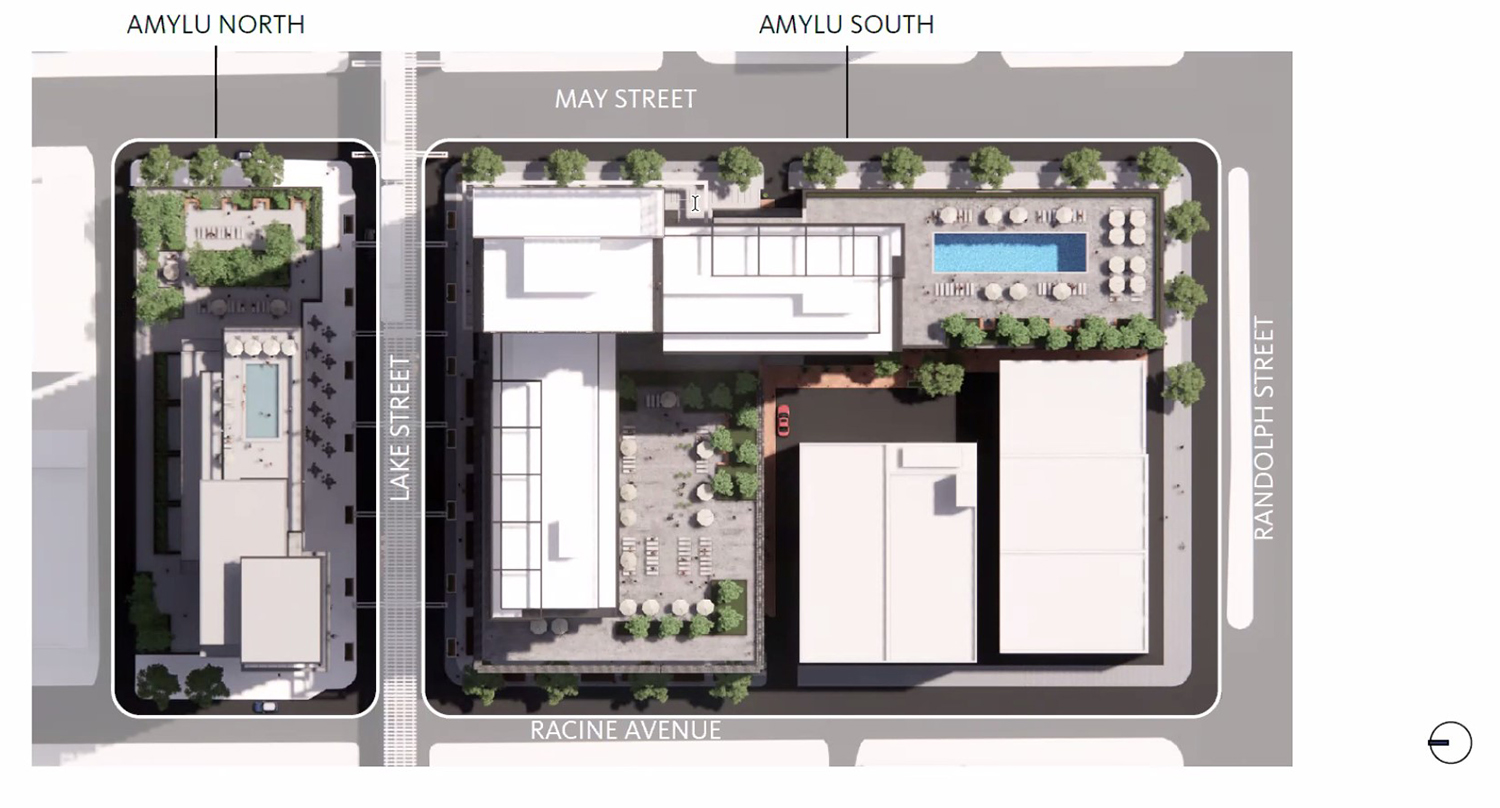 Designed by Gensler, the new construction consists of a two-tower scheme. The southern tower will rise 29 stories, topping off at 330 feet. Holding 486 residential units, the structure will also hold retail space on the ground floor and 261 parking spaces. The northern tower will encompass 18 floors, rising 222 feet while holding 179 residential apartments. The mixed-use structure will meet W Lake Street with retail space and 29 parking spaces located on the ground floor off the alley. The proposed unit mix has yet to be finalized but is projected to include 50 percent one-bedrooms, 30 percent studios, 15 percent two-bedrooms, and five to seven percent three-bedroom dwellings. Bike parking will be provided. 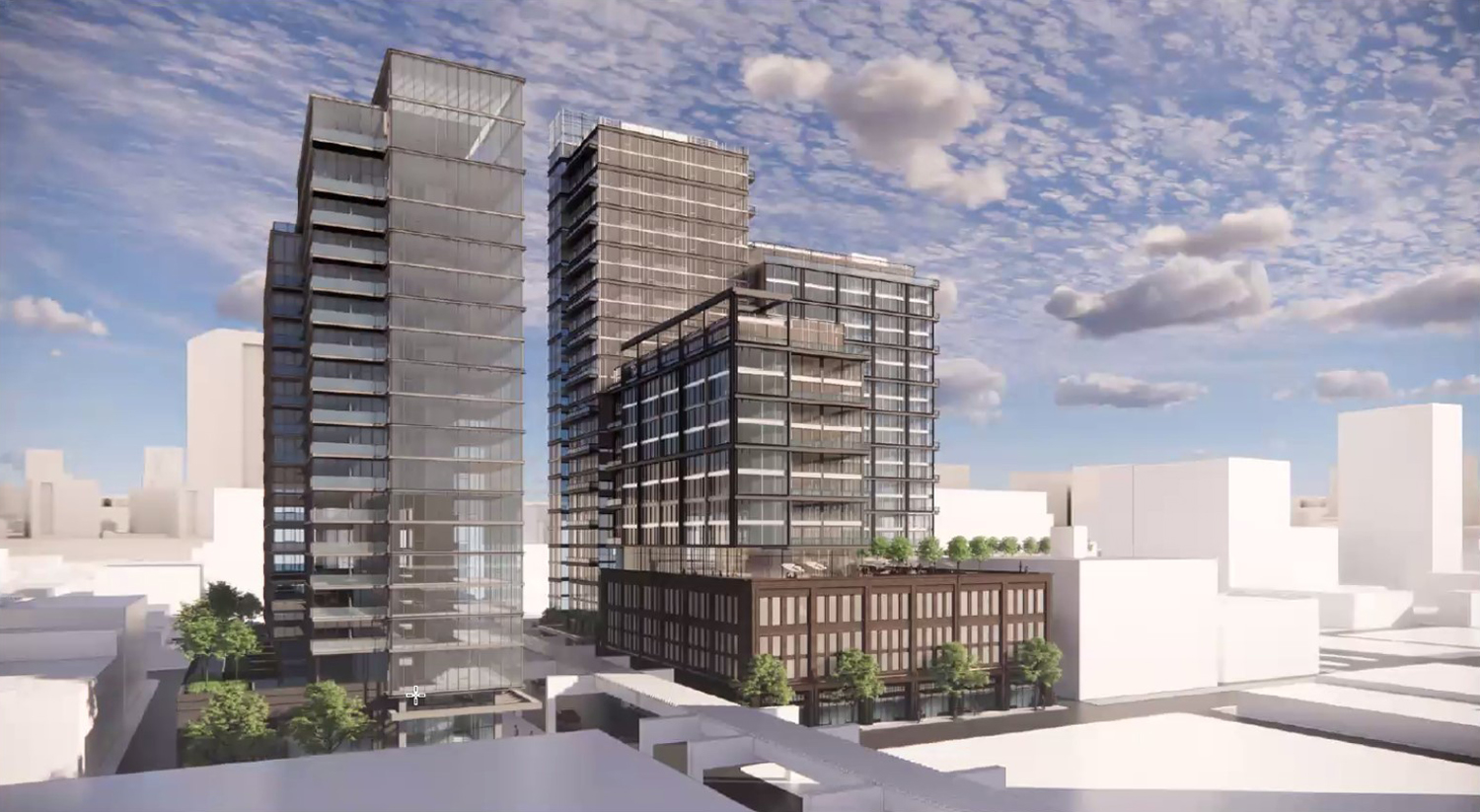 As a revised project, the new scheme reflects a reduction in floors for the southern tower down from the original 33 stories, while the northern tower was switched to a residential use and increased from 11 to 18 floors. This change in scope is the result of market changes that made financing unattainable in tandem with the update to the Fulton Market Innovation District Plan that now allows residential uses north of W Lake Street.

The design of the towers reflect an effort to reduce the visual massing of the towers and improve light and air for surrounding buildings. While the original office development on the northern parcel was shorter and would’ve been built lot line to lot line, the residential replacement will be taller and thinner, with the bulk of its massing holding the corner of N Racine Avenue and W Lake Street. The remainder of the massing will set back from W Lake Street. The roof deck on top of the podium will now house space for residential amenities. 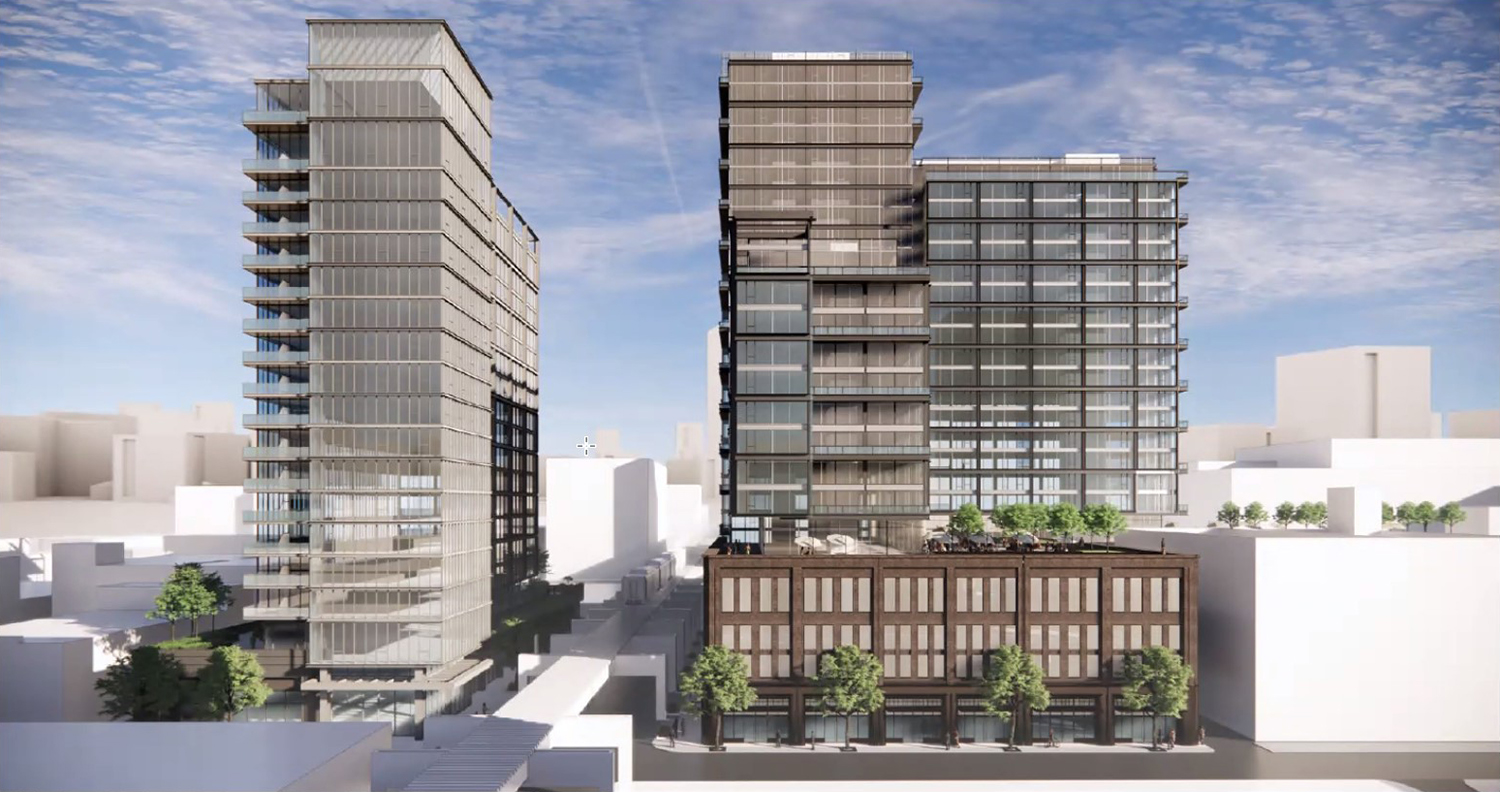 The southern edifice rises in four distinct massings, creating a podium and three connected tower portions. The tallest section anchors the corner of N May Street and W Lake Street, creating a dialogue between the northern and southern projects. The facade sets back as it rises to create the podium, a 22-story portion, and the tallest 29-floor peak. The southern podium reaching W Randolph Street has been reduced in height and elongated, allowing for a pool amenity deck. 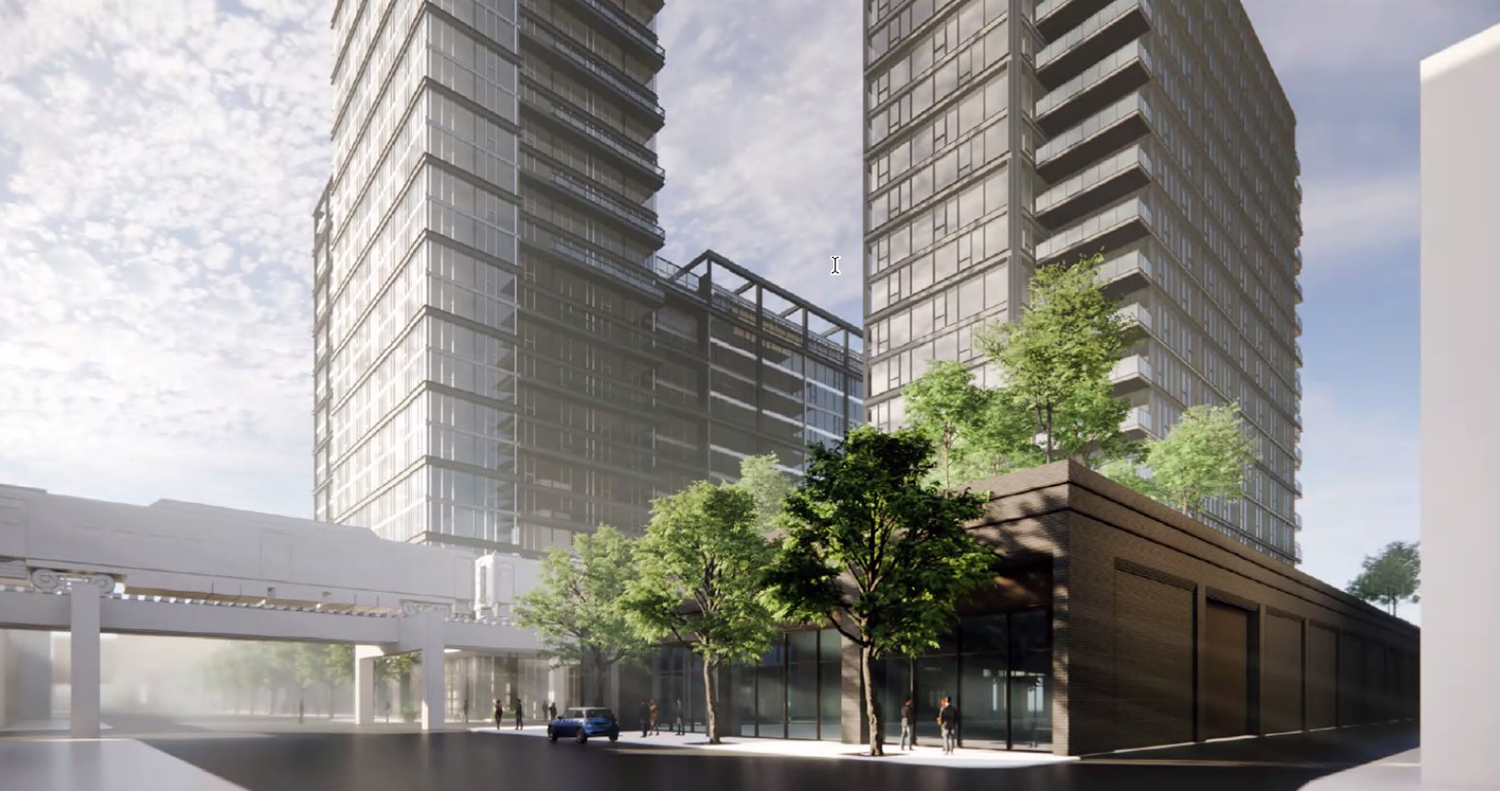 The treatment of the facade changes to create variation for the three volumes within the same architectural language, adding visual interest between the podium and tower portions. Variation of the podium design will create a collection of retail facades. 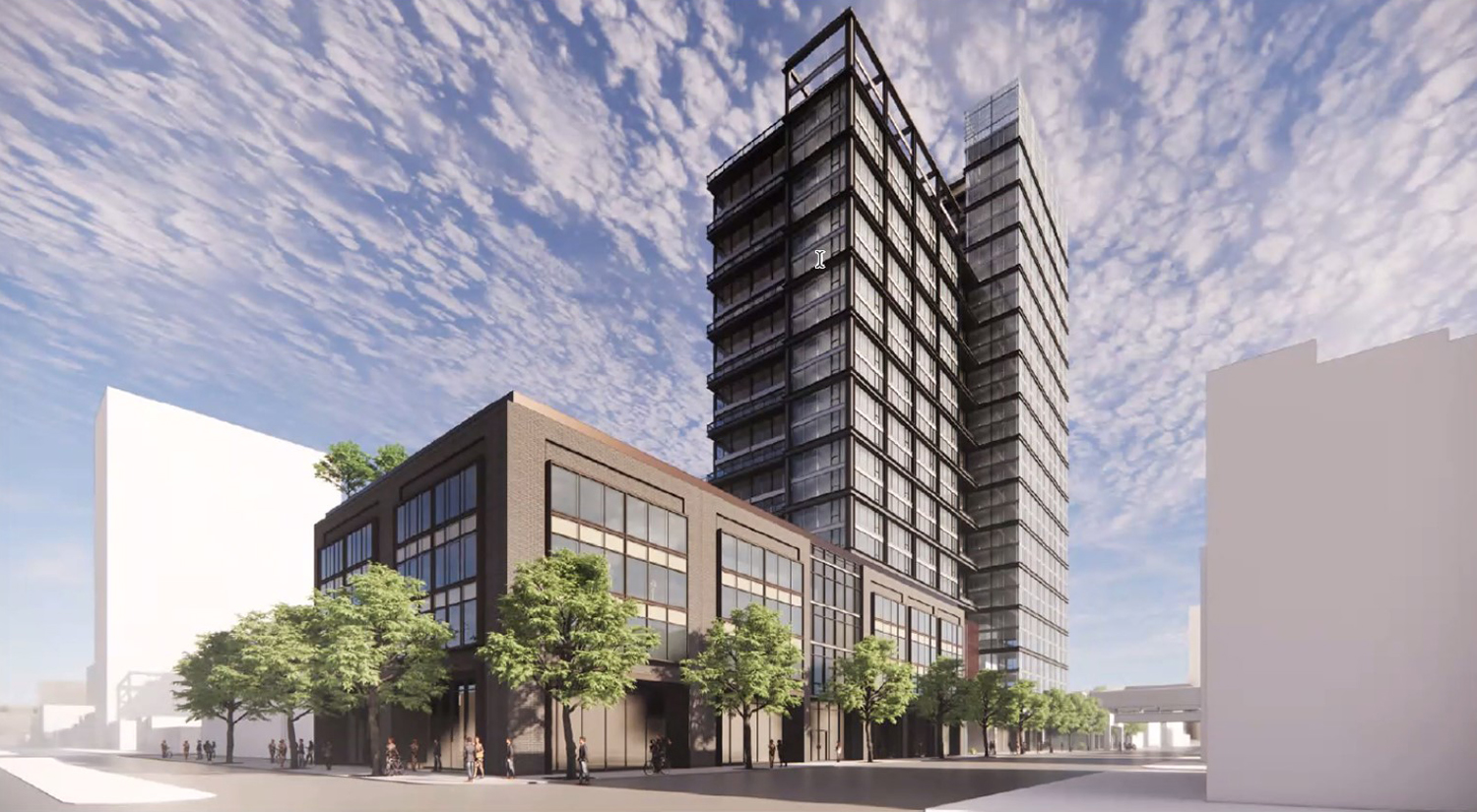 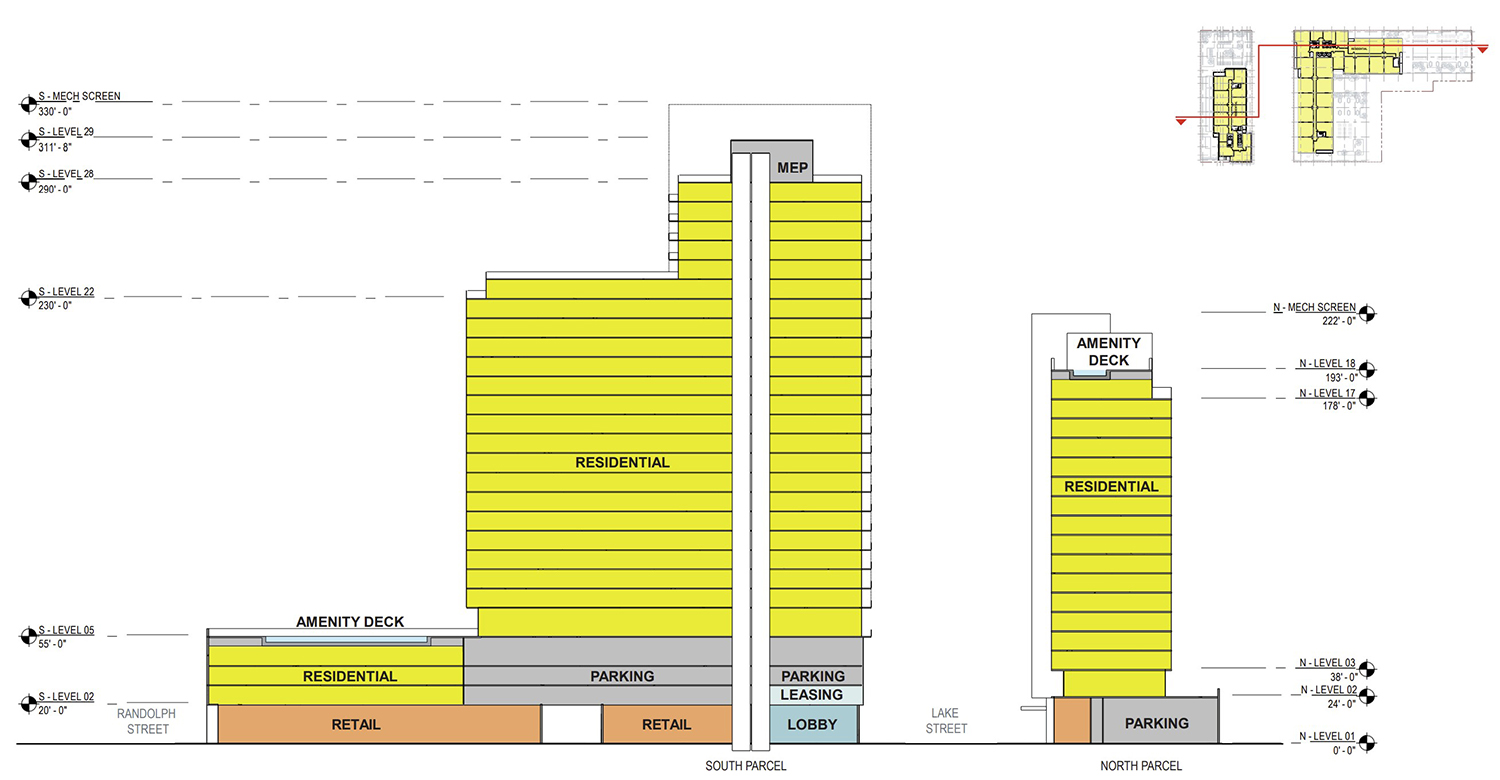 The development will wrap the surrounding streets with active retail spaces and residential lobbies. The podium reaching to W Randolph Street will be filled with residential units, pushing the parking portion of the podium up against W Lake Street. A pedestrian alley will stretch from W Randolph Street to W Lake Street, creating a public open space that can offer space for informal retail pop-ups while activating the interior of the site. 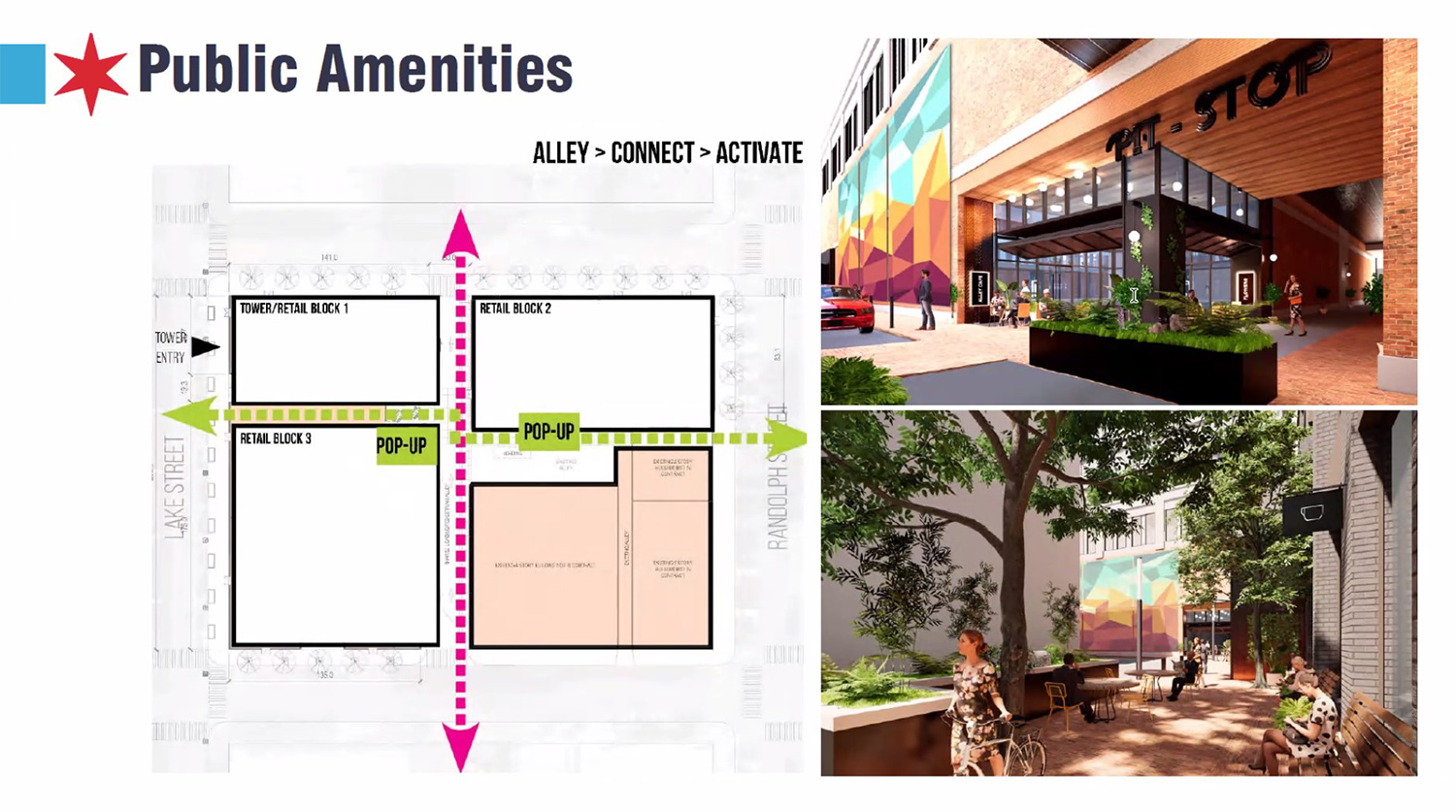 The developers have committed to producing 20 percent affordable units on site, for a total of 133 affordable housing dwellings. The unit mix for the affordable units will match that of the entire development, with those residences scattered within the buildings evenly. Beyond the existing 20 percent requirement, LG Development Group is working with the city to provide an additional 67 affordable apartments to reach the 30 percent goal recently set by the city. These unit may be on or off site as they are finalized. 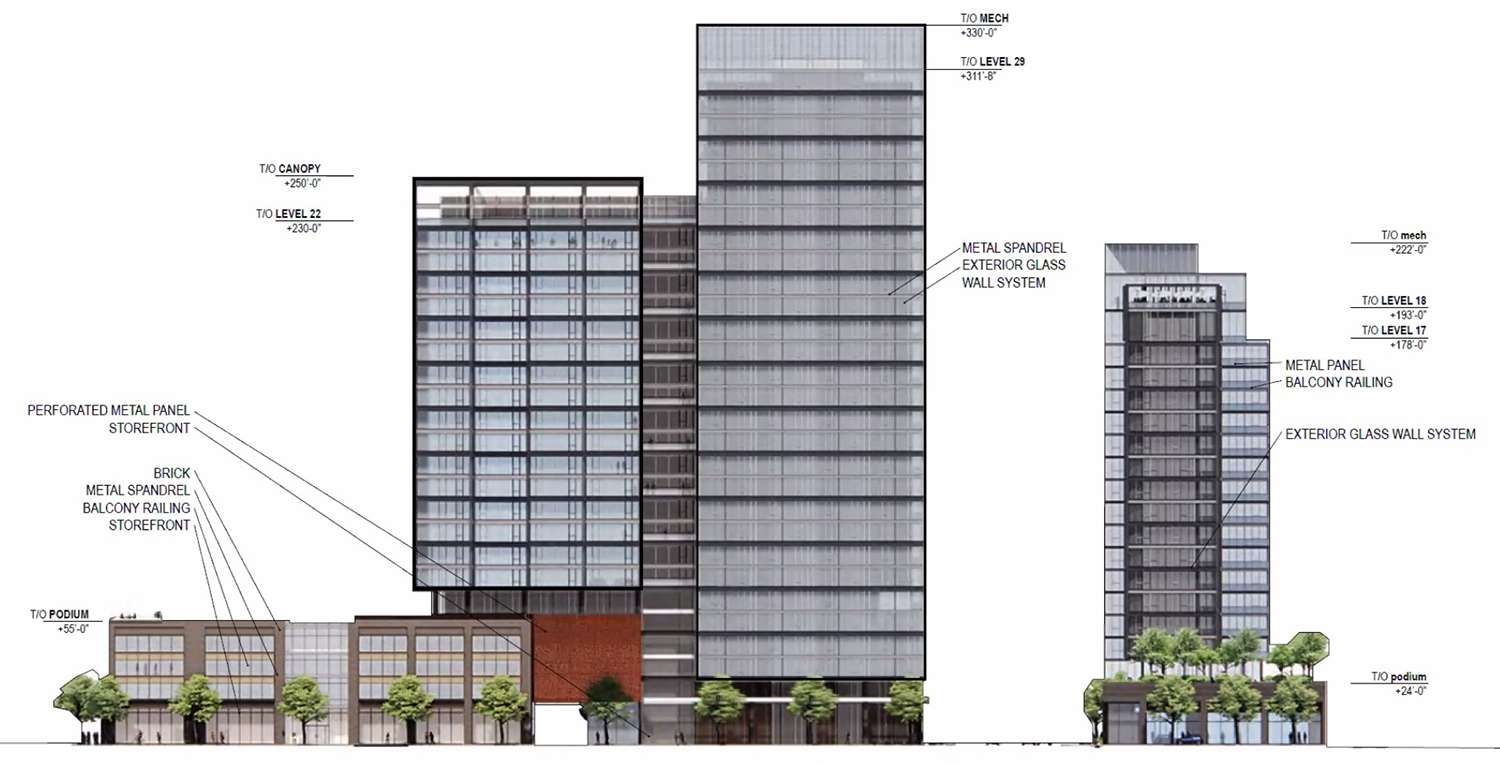 Expected to cost about $300 million, the two structures will be built one at a time. While it has not been finalized which one will go first, developers are anticipating the southern site to be commenced first. The timeline for city approvals is expected by the end of the summer, with zoning and full Chicago City Council approval pending. Final documentation of the construction drawings and permitting will last approximately eight to ten months, beginning in late July or August. Construction of the actual towers will require 18 months per building, with the first completion expected in 24 to 28 months from now. The second edifice will be started before the first phase is complete.