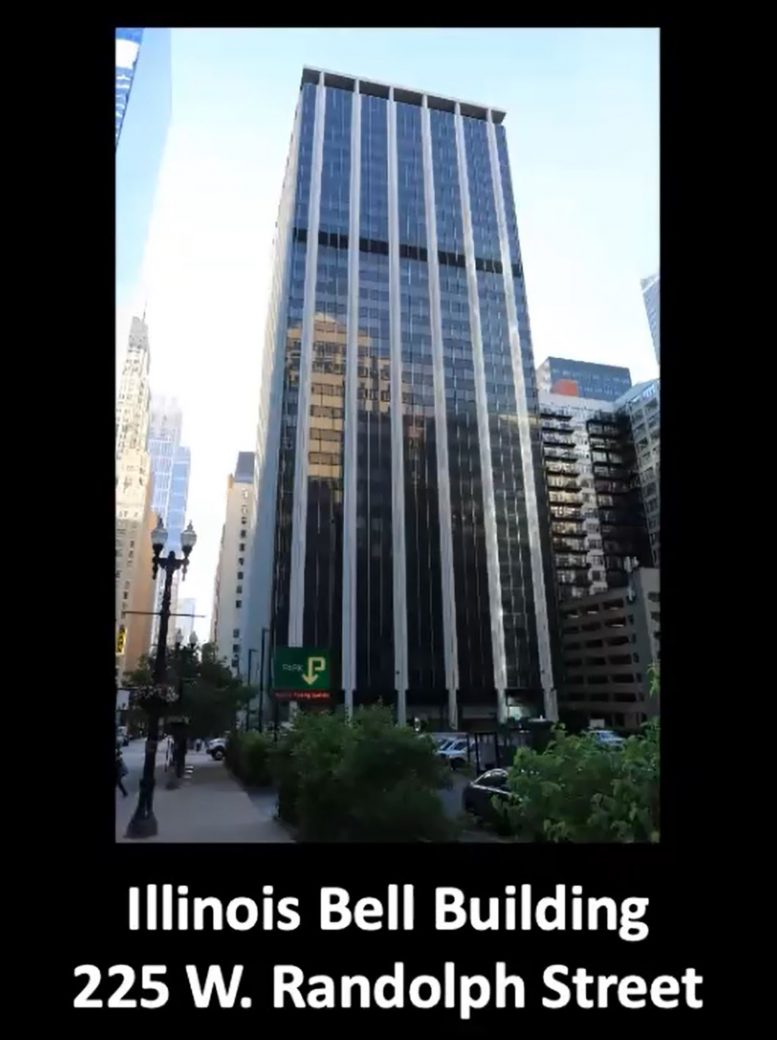 The Commission on Chicago Landmarks has approved the final landmark recommendation and Class L tax incentive for the Illinois Bell Building. Located at 225 W Randolph Street in The Loop, the tower is located at the intersection of W Randolph Street and N Franklin Street. The tower rises 427 feet over 31 floors, and was constructed in 1965. The building was originally home to the headquarters of its namesake tenant, the Illinois Bell Telephone Company, while most recently home to AT&T offices. 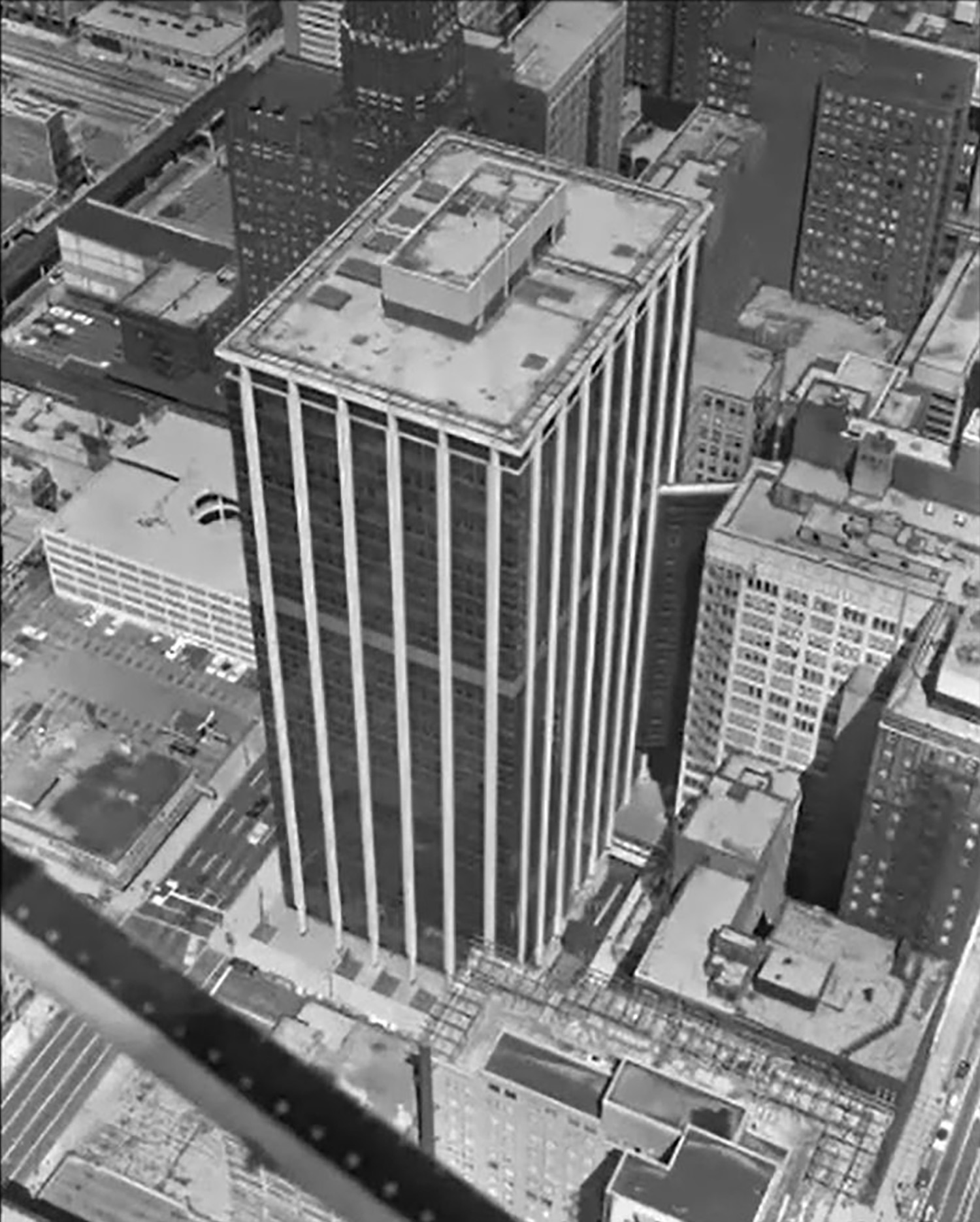 According to the report, the Illinois Bell Building meets three criteria for landmark designation. The building meets Criterion 1, which is its value as an example of city, state, or national heritage. The second criterion is Criterion 4, which is the project as exemplary architecture. The Illinois Bell Building is one of the few examples of New Formalism applied to a skyscraper, and would become the first New Formalist landmark. The marble and granite facade is key to New Formalism. The tower is distinguished by its strong vertical columns, projecting roof slab, cantilevering first floor colonnade, and first level street plaza. Additionally, the structure meets Criterion 5, which is an important architect, who in this case was Holabird & Root, a longtime Chicago firm.

The project also meets the commission’s Integrity Criterion. The building exterior possesses a significant degree of historic design integrity. Changes to the project have been limited. Skybridges and concourses that once connected it to its neighboring structure have been removed. A 1980s renovation altered the lobby, lowering the ceilings and adding wood paneling. The elevator lobbies on the upper floors were also modernized in the 1980s renovation. Retail tenants were added in the corners at ground level. 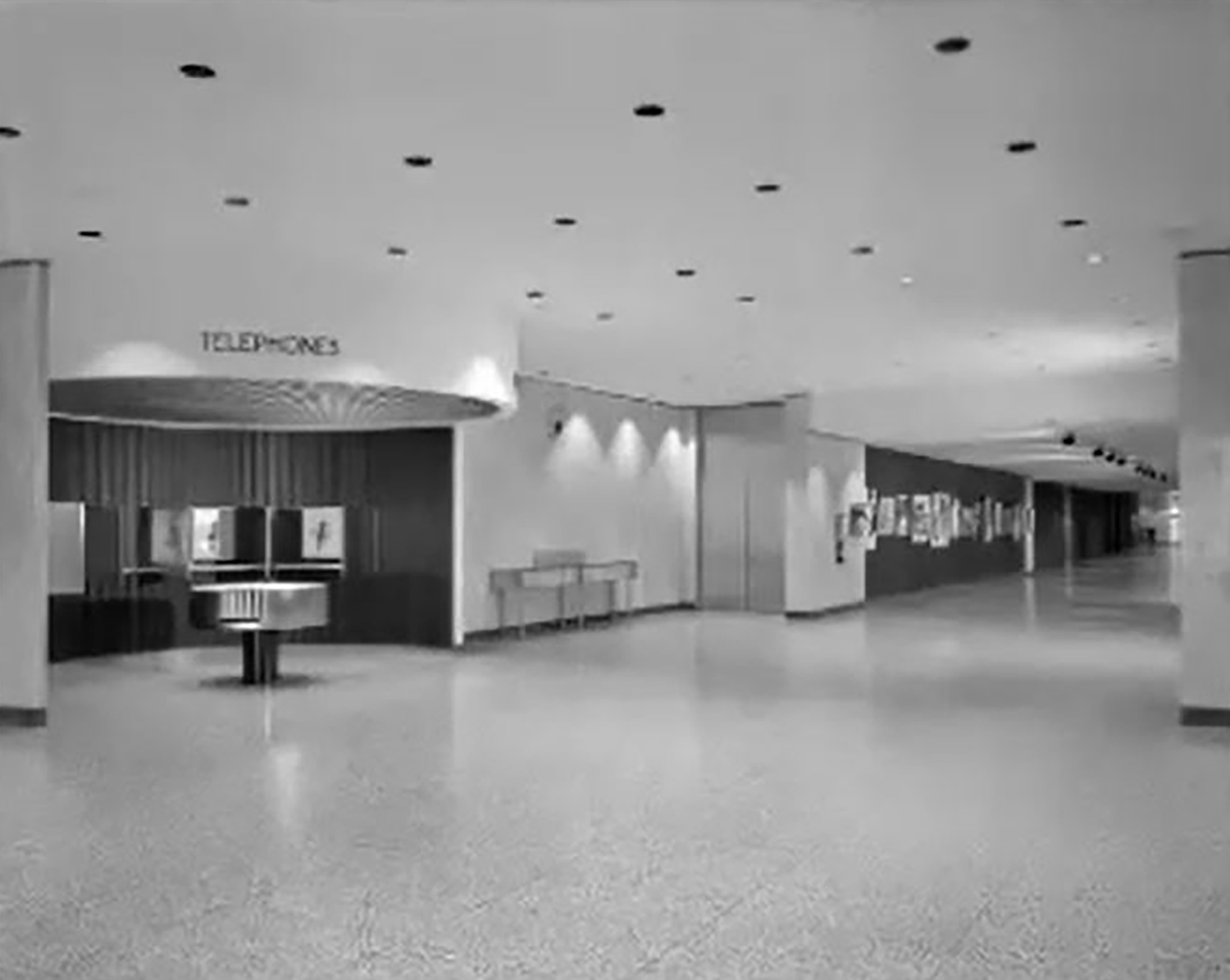 Under this landmark designation, all exterior elevations including rooflines, the first floor lobby, and exterior plazas including the granite planters on the N Franklin Street and W Randolph Street elevations will be protected.

Onni Group, the developer for the project, has sought a Class L tax incentive for the structure. The Class L property tax incentive is a special real estate tax assessment that is used to encourage preservation and rehabilitation of landmarked buildings. Developers must invest a minimum of 50 percent of the assessed value in rehabilitation and CCL must certify that the rehabilitation meets historic standards. 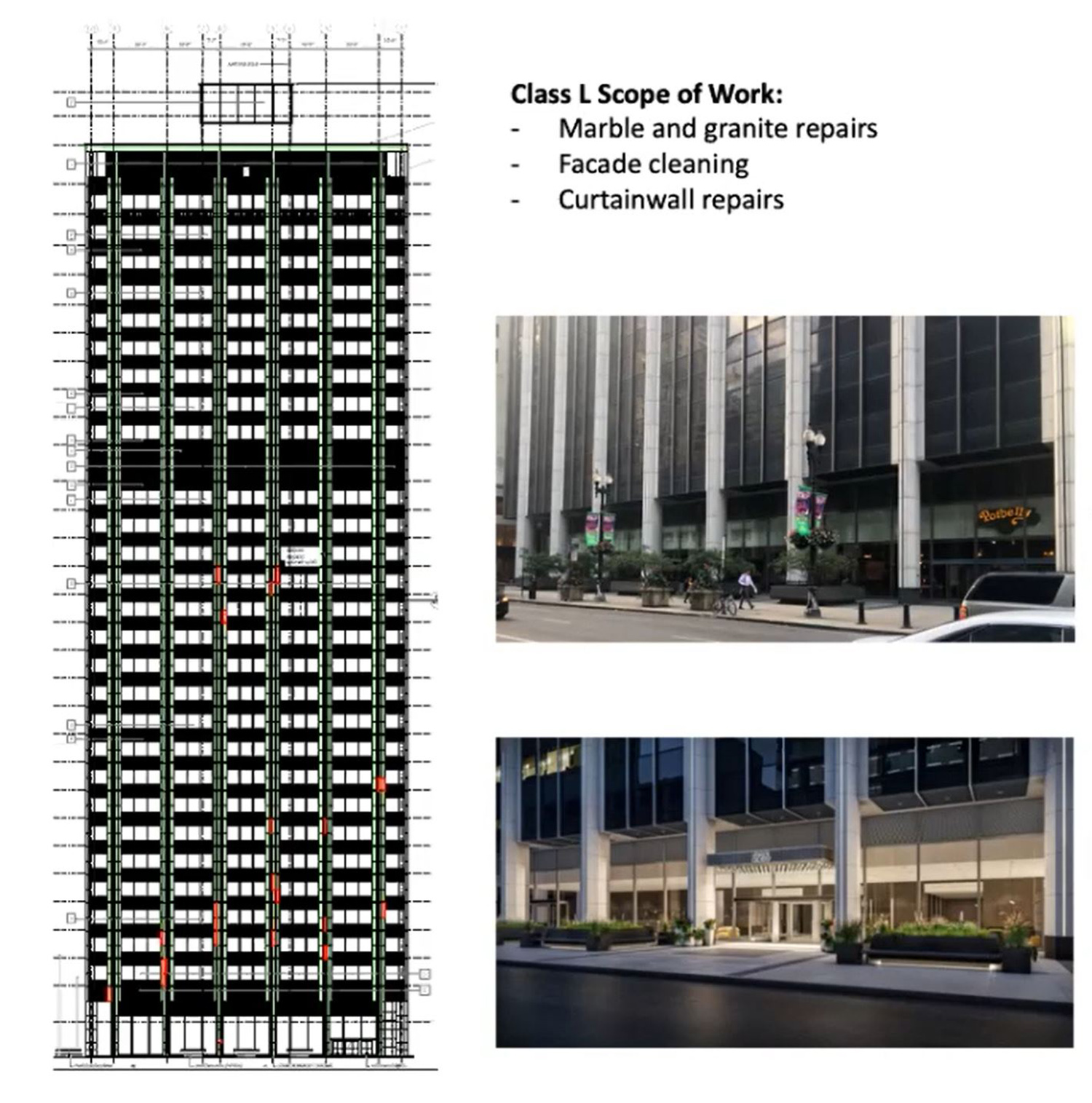 The scope of work on the exterior includes marble and granite repairs, facade cleaning, and curtain wall repairs as necessary. The plaza pavers will be repaired and planters will be modified.

On the interior, the lobby will be rehabilitated, replacing the non-historic wall panels with stone and replacing the 1980s era ceiling. There will be new stairs constructed to access the basement from the lobby. There will be a new entrance in the center bay of the W Randolph Street elevation. 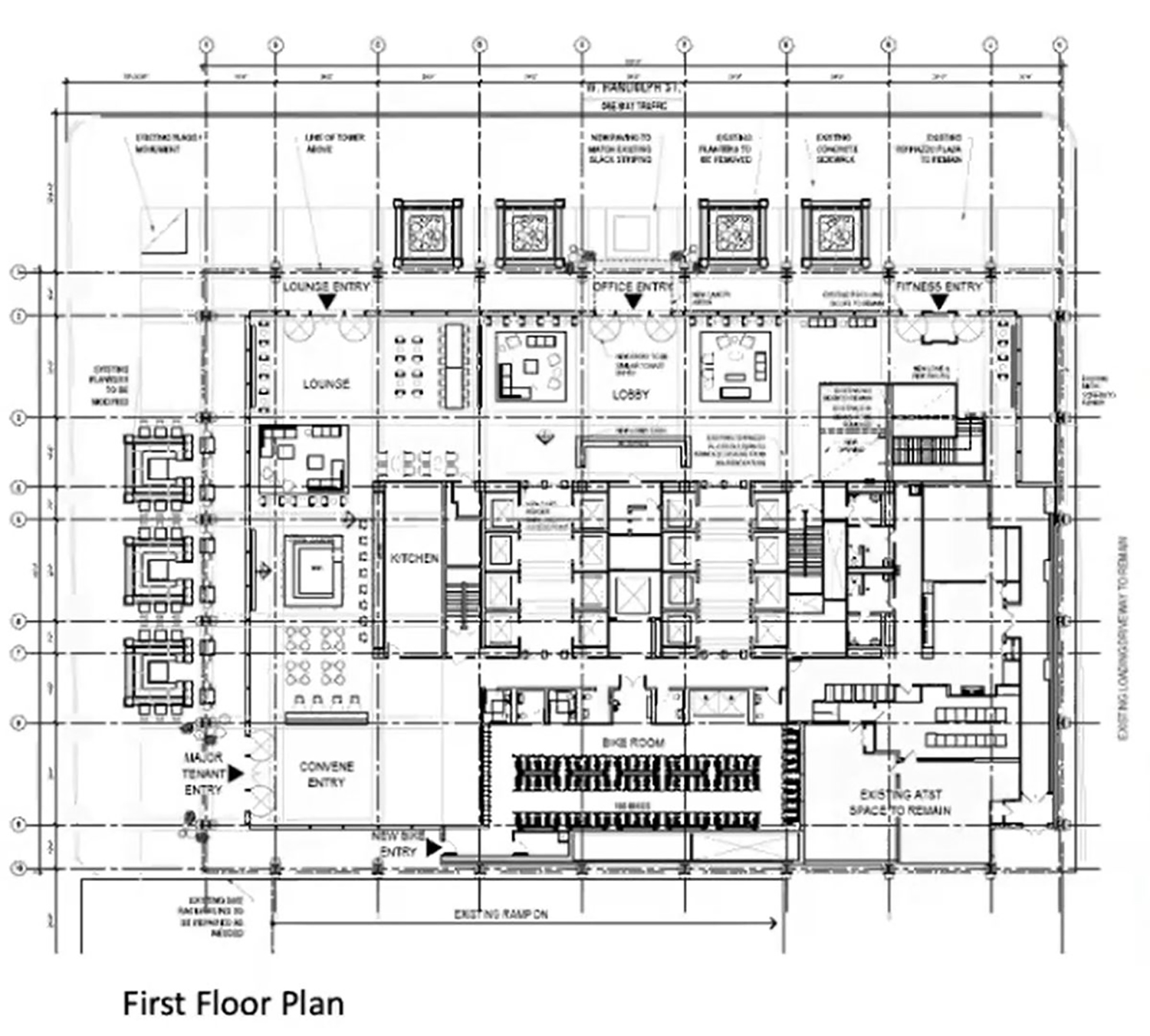 On the upper floors, there will be demolition of the interior non-load bearing walls and finishes. Elevator lobbies, common corridors, and bathrooms will be renovated. Elevator cores will also be renovated and restored.

The Class L incentive includes sustainability requirements, where the new development must exceed energy code by five percent. Also required will be interior water use reduction, proximity to transit, and the inclusion of bike parking. During construction, 80 percent of waste must be diverted from landfills. 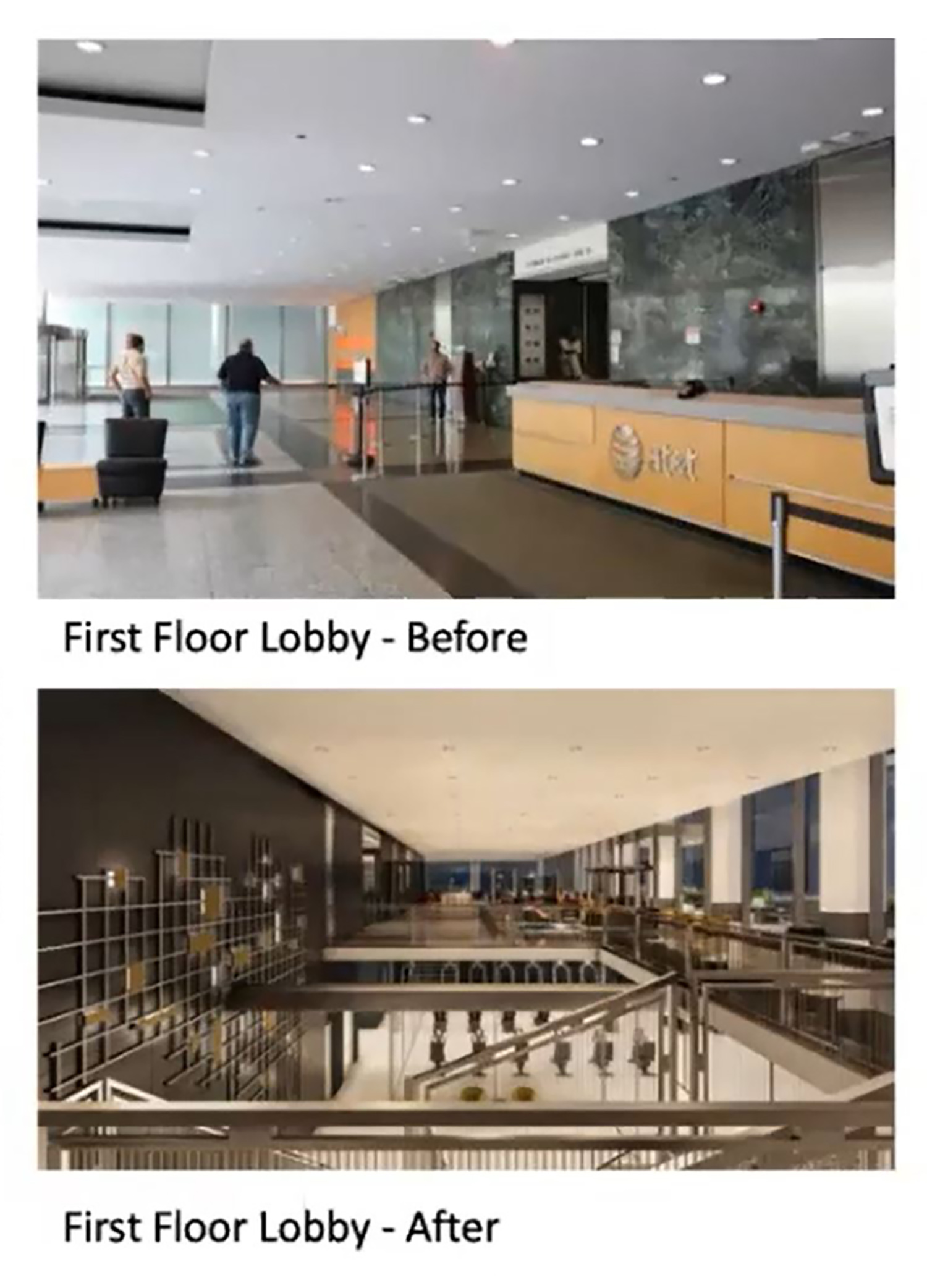 The project is awaiting approval for the landmark status and Class L incentive from City Council. Construction will begin after the sale of the building has been finalized. The developer aims to begin construction in early 2021, with work projected to be completed in March 2024. The total estimated cost for the project is $342 million, which includes the cost of buying the property.