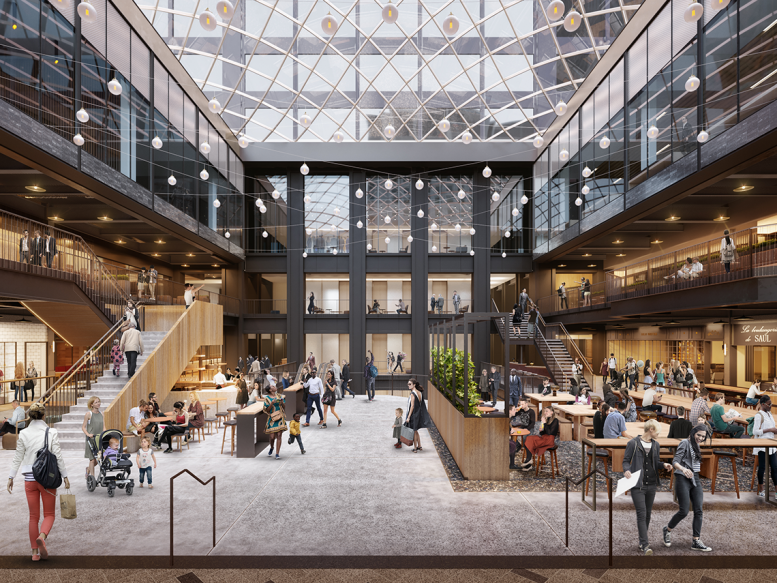 Recent photos show the final touches on Catalog, a 300,000-square-foot addition at the foot of the Willis Tower, formerly the Sears Tower. The project began welcoming visitors late last year, and both interior and exterior construction have continued alongside the partial occupancy. 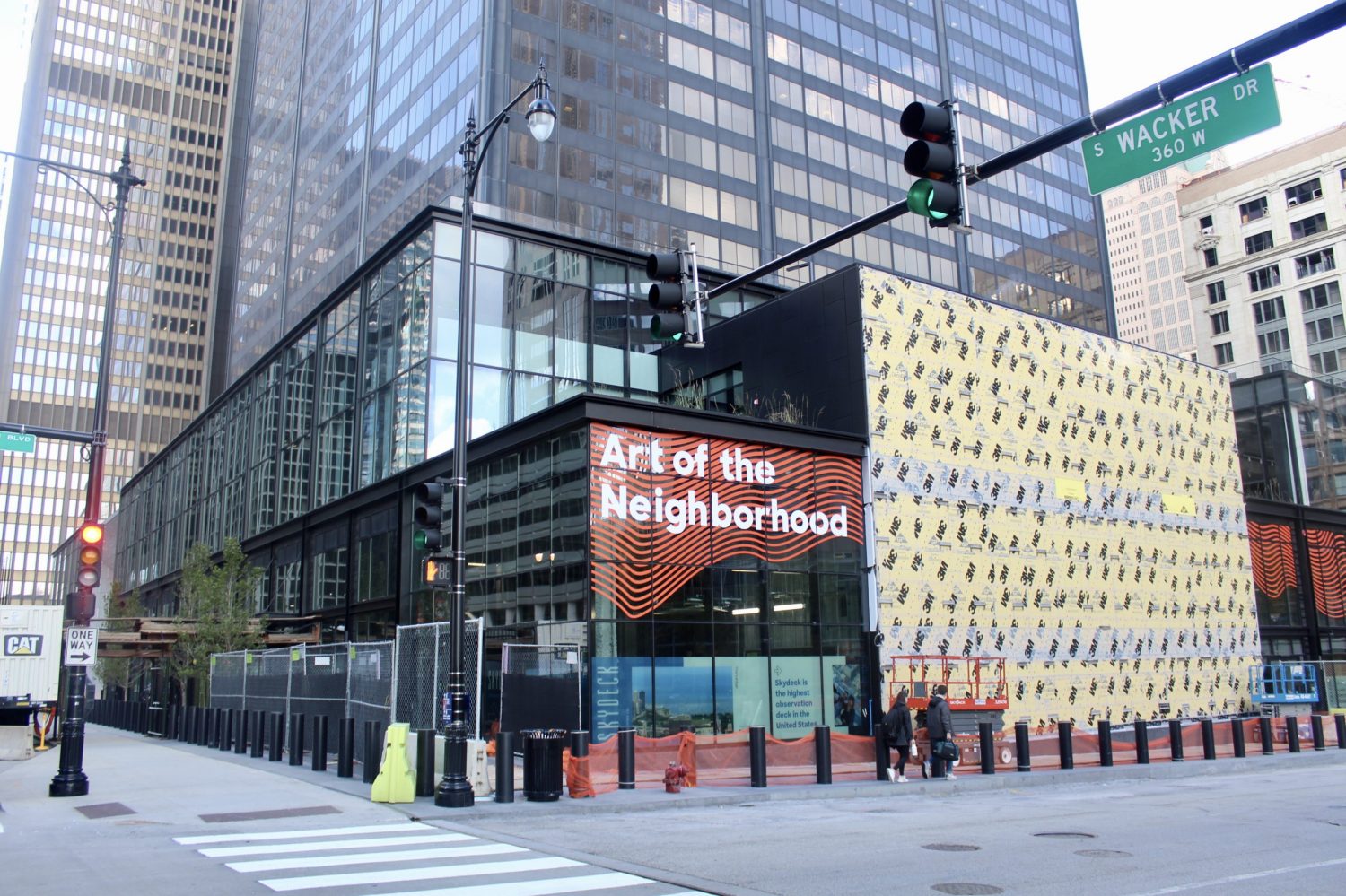 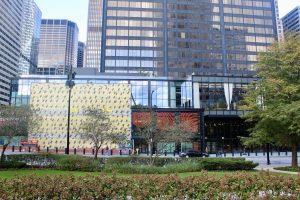 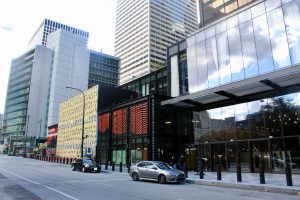 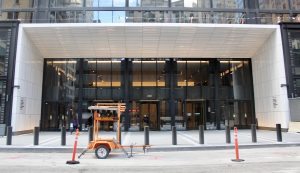 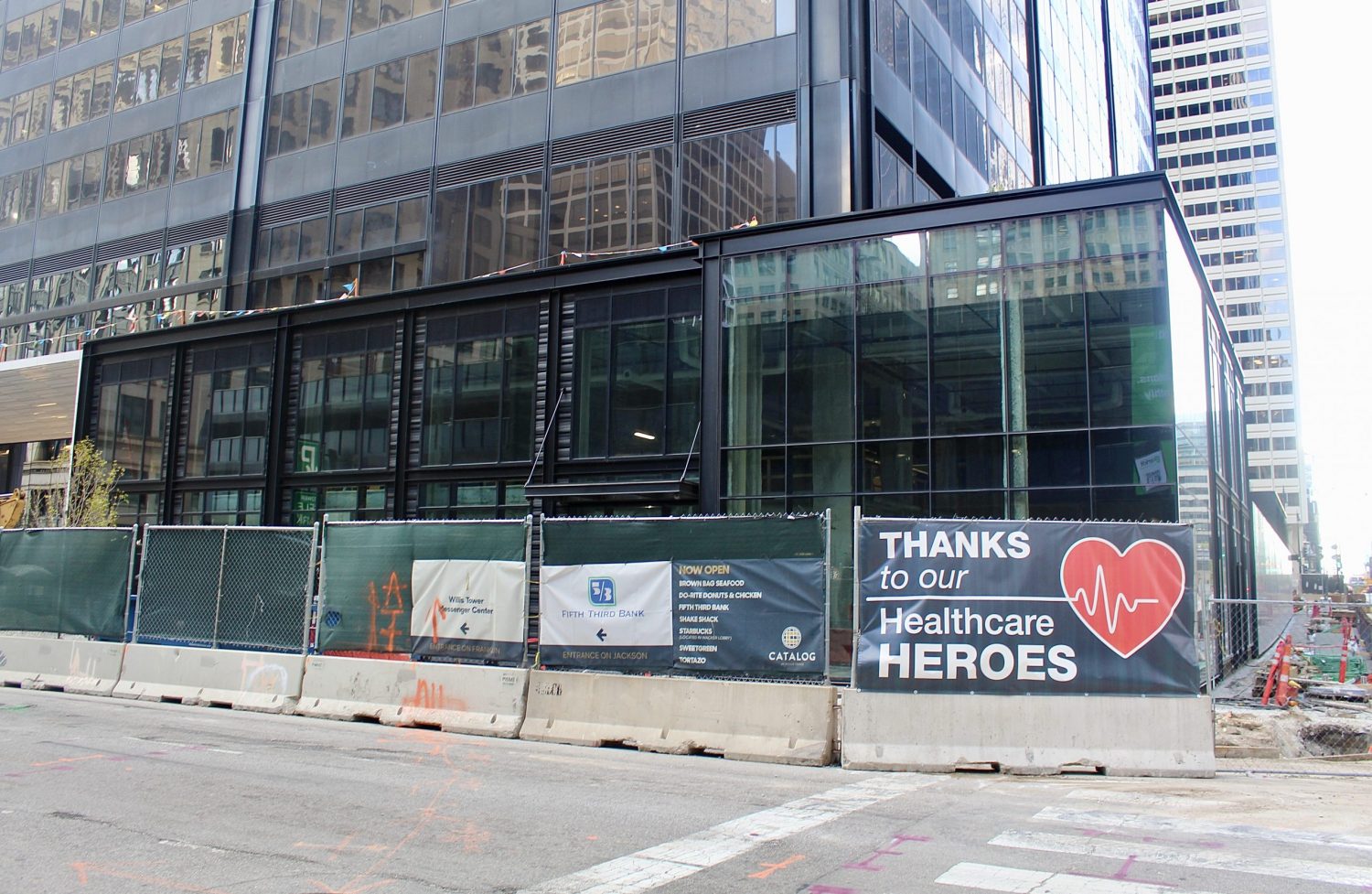 Developed by EQ Group as the flagship feature of a larger Willis Tower renovation, the new development stretches three floors in height and wraps around its base. While exterior renovations cover all sides of these first three floors, the added structure will primarily occupy the west and south sides of the tower. 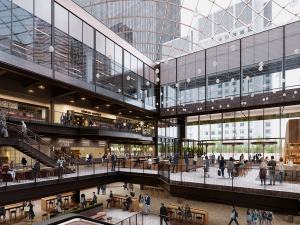 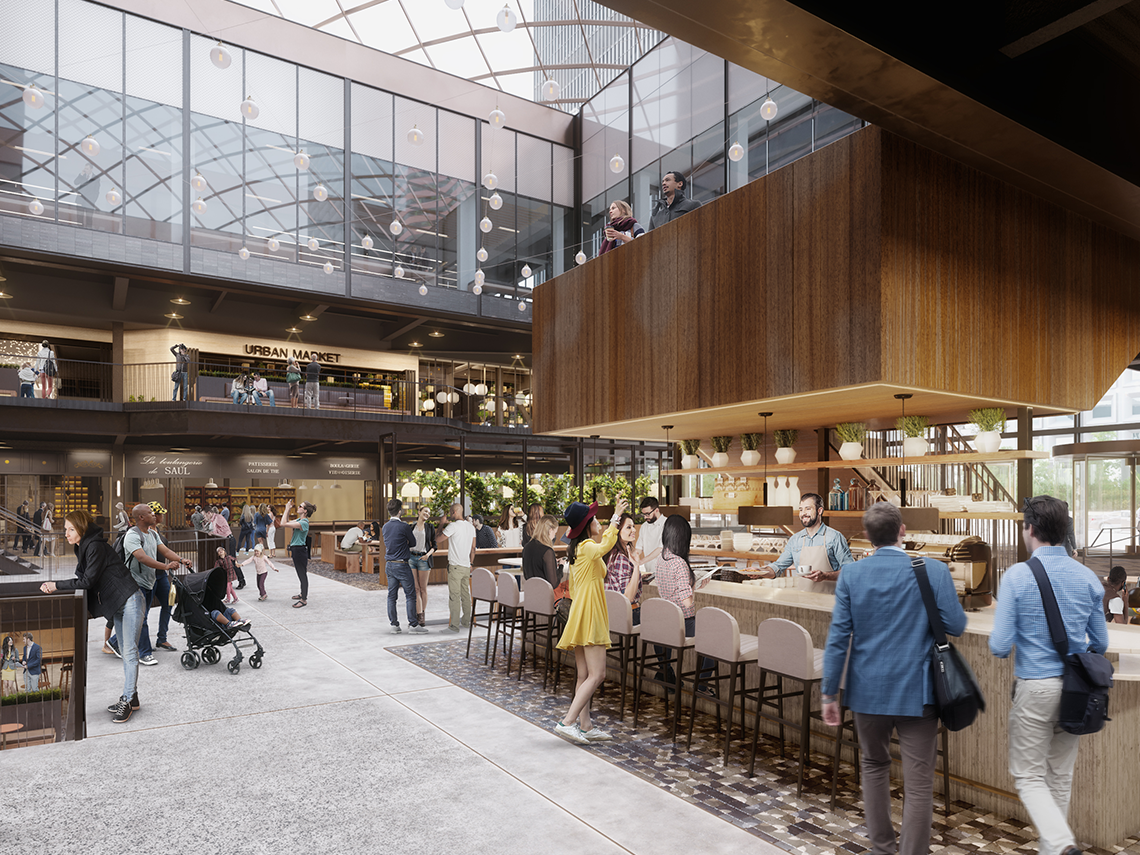 The major east and west entrances serve primarily office tenants, while the grand southern entrance is tailored to other visitors like restaurant-patrons and those looking to access Skydeck, the observation deck. This segment contains a variety of dining options including Brown Bag Seafood and Shake Shack, as well as a food hall from Urban Space. Within Catalog, EQ Group has also planned a third-floor venue for the meeting and workspace company Convene, which offers tenants 90,000 square feet of rentable gathering areas.

As part of the overall renovation, EQ Group has added an additional 125,000 square feet of tenant-exclusive amenity spaces inside the tower itself, updated the existing elevators to be faster and more energy efficient, and integrated a new antenna lighting system that now changes colors in seconds rather than hours. 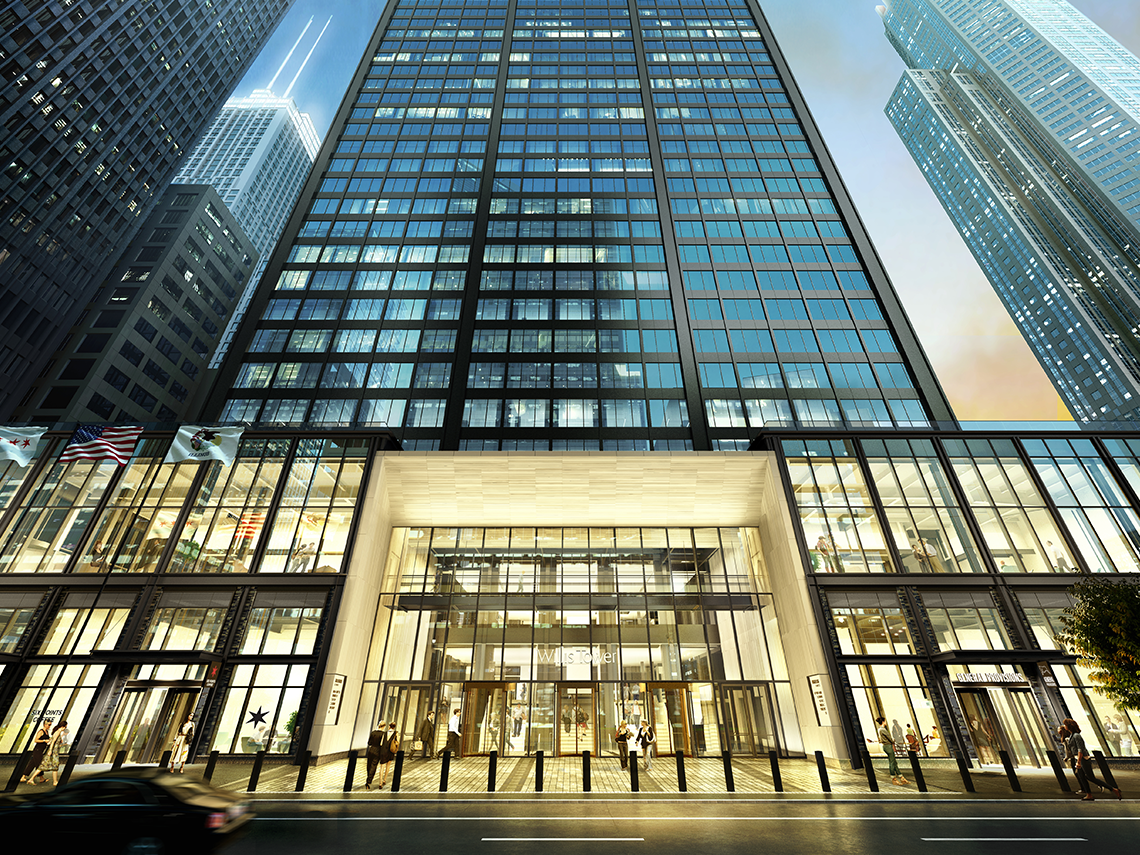 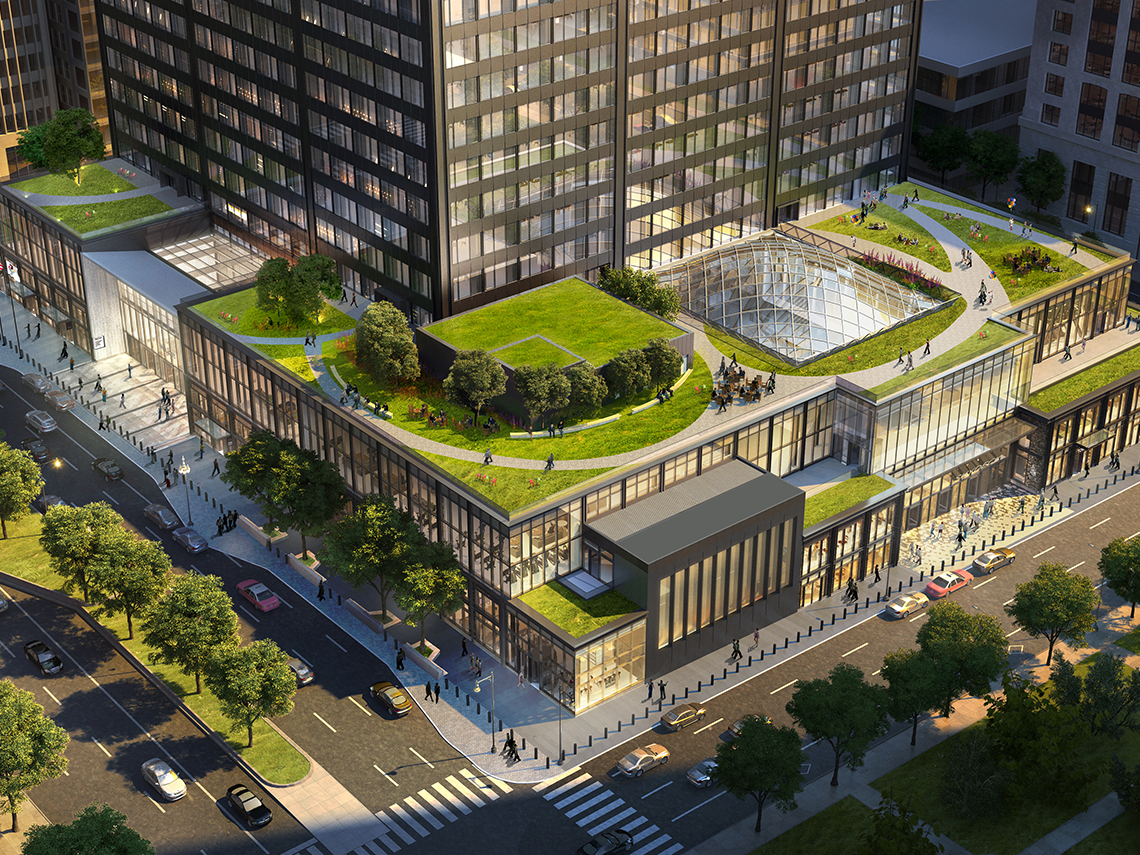 The design by Gensler is a nod to the architecture of the main structure with spacious windows and black exposed beams. However, the firm has also introduced multi-hued brickwork throughout the exterior, as well as grand east and west entryways that are surfaced with light-colored masonry. Atop the new structure is 30,000 feet of green space with walkways and planted flora. Additionally, the south portion of this roof will also include a large curving skylight to welcome visitors with expansive upward views of the 1,451-foot-tall glass and steel tower.

The containing block offers a variety of bus routes around its perimeter. At the northwest corner is the Adams & S Wacker bus stop for Routes 1, 7, 28, 121, 126, 130, 151, and 156 heading west on Jackson. To the southwest at the W Jackson Boulevard & N Franklin Street intersection is a stop for these same routes heading east. The intersection also includes the Franklin & Jackson stop for northbound Routes 134, 135, and 136. Meanwhile, CTA L transit for the Brown, Orange, Pink, and Purple Lines can be found at the nearby Quincy station, a two-minute walk east from the east entrance.

Since YIMBY’s last article on the project in early September, changes have included marketing materials stenciled along the street-level windows, as well as the clearing of some site equipment along the sidewalk. Most notably, the facade treatment remains to be completed on a large south-facing wall near the southwest corner. From the renderings, the wall will include 10 multi-story windows distributed evenly across.

The building is currently in use by visitors, office workers, and many of the restaurant tenants. Remaining spaces and exterior finishes will likely be completed around the end of the year.

Be the first to comment on "Final Touches Remain for Catalog, Willis Tower’s New Podium in The Loop"