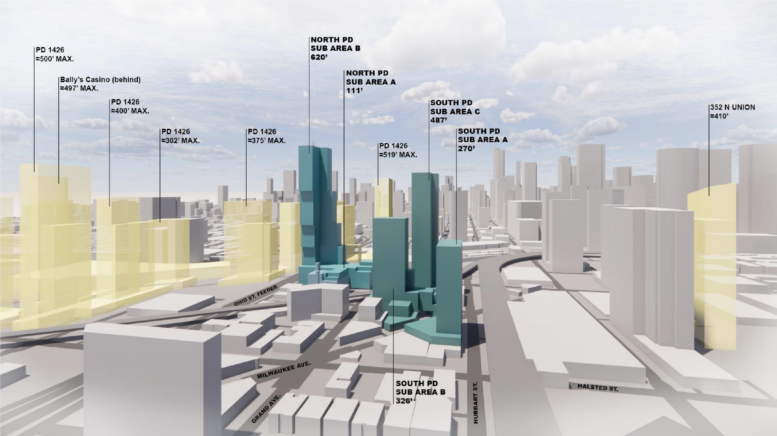 The Chicago Plan Commission has approved a large new mixed-use development using various lots in West Town. Spread across a total of five lots predominantly centered around the intersection of W Grand Avenue and N Union Avenue, the project looks to feed off of the upcoming demand created by the nearby casino as well as the growing West Loop neighborhood within walking distance. The multi-phase proposal is being led by Fulton Market stalwart Shapack Partners which partnered with local firm Eckenhoff Saunders and New York-based ODA, known for their deconstructed style.

Site context map of NOMA by ODA and Eckenhoff Saunders

Dubbed NOMA, news on the project broke in July with the overall buildout bringing four high-rises along with a handful of shorter structures to connect with the neighborhood context. One of the main challenges that the designers face is the separation of all of the properties, with a massive set of elevated Metra tracks cutting the development into two main sections. To address the separate sections they will utilize covered and exposed plazas including a single mews, similar to what Shapack built at 167 Green and will be included at the upcoming 170 N Green Street. 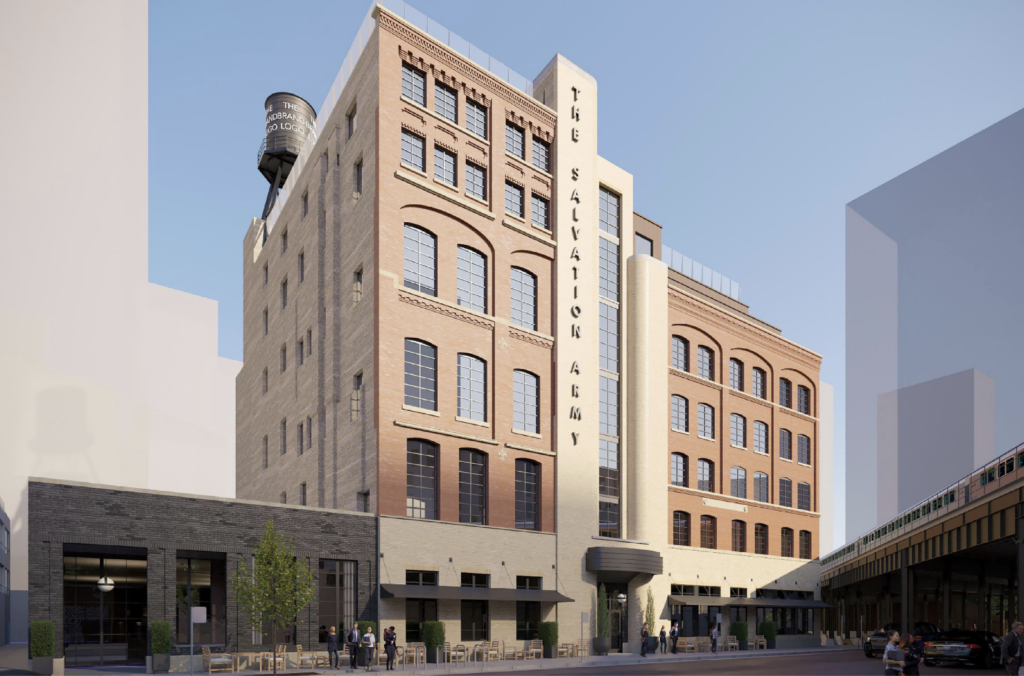 Phase one will be the first to be completed and is also the only major re-use of an existing structure within the planned development. Located at 509 N Union Avenue, the six-story building with Art Deco additions dates back to 1891 when it opened as a factory for Braun
& Fitts Butterine margarine, changing owners a few times before being given to the Salvation Army in the 1930’s. They owned and operated it until its closure this past May when it was sold to the developer along with the lots behind it for $25 million.

The main building consists of a wood and concrete structure section each with a different height, these will be unified with a new two-story addition built setback from the facade, with its famed water tower also being preserved. This will all be converted into a boutique hotel containing 141 rooms varying in size including larger corner suites along with a large lobby, fitness area, rooftop amenity deck, and more within the 111-foot-tall construct. There will also be a large first floor restaurant which will be split within the Salvation Army and the adjacent one-story edifice that will be merged. 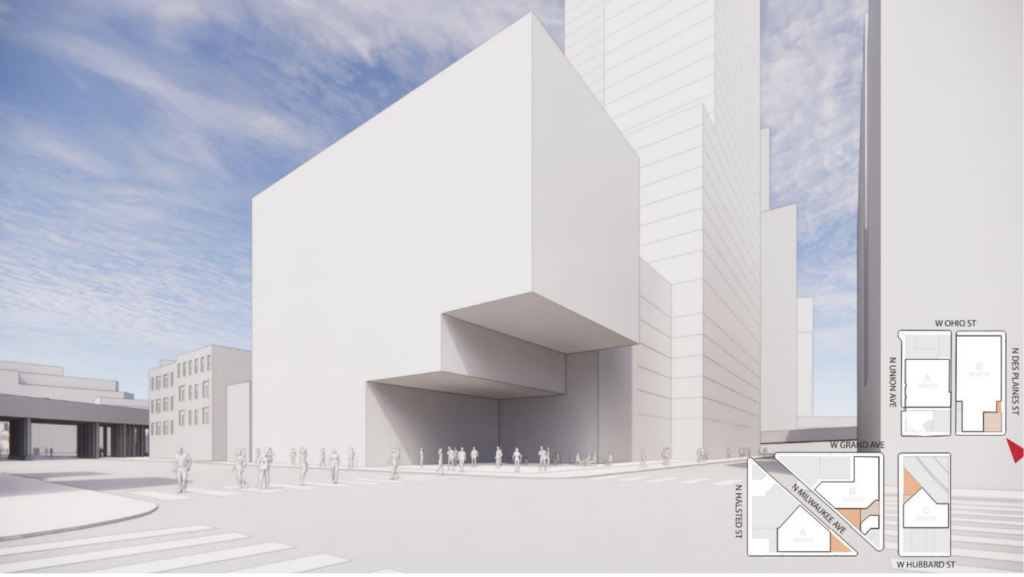 Placeholder massing rendering of NOMA by ODA and Eckenhoff Saunders 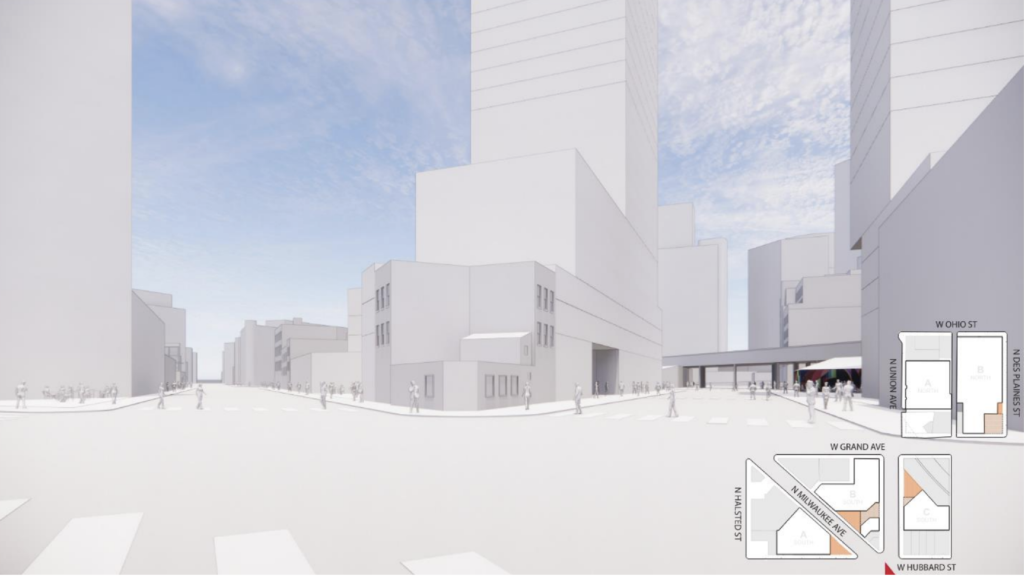 Placeholder massing rendering of NOMA by ODA and Eckenhoff Saunders

Phase two will come at a later time and will contain the aforementioned four high-rises with the lot behind the Salvation Army on N Des Plaines Street holding the tallest tower that rises to 620 feet, and the lots to the west of the track bringing a 270-, 326-, and 487-foot-tall tower. These will potentially build-out roughly 2,269 residential units which will be mostly rentals, per city ordinance 454 of those will need to be affordable that will be held on site, with others being forgiven in exchange for a $12 million donation to the Neighborhood Opportunity Fund. 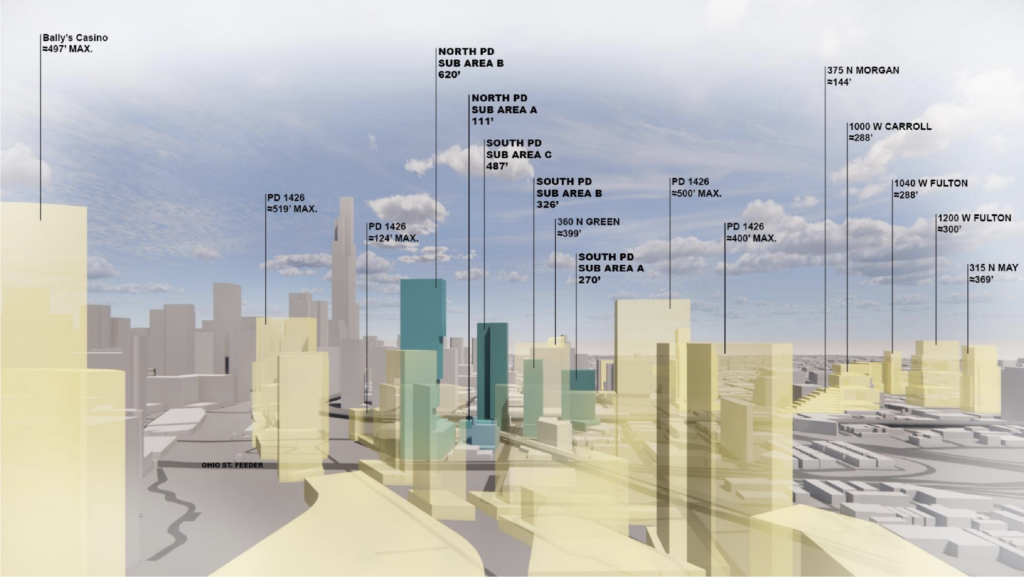 Due to the proximity to various transit options including bus service for CTA Routes 8, 56, 65 and the CTA Blue Line at Grand station all being within a two-minute walk, the project will be considered transit-oriented thus will be currently providing 320 vehicle parking spaces. The development will also create 1,400 temporary and 80 permanent jobs and provide additional funds to the city, however it will now need to gain approval from City Council, but the individual towers will each require a review as necessary with no construction timeline currently provided.