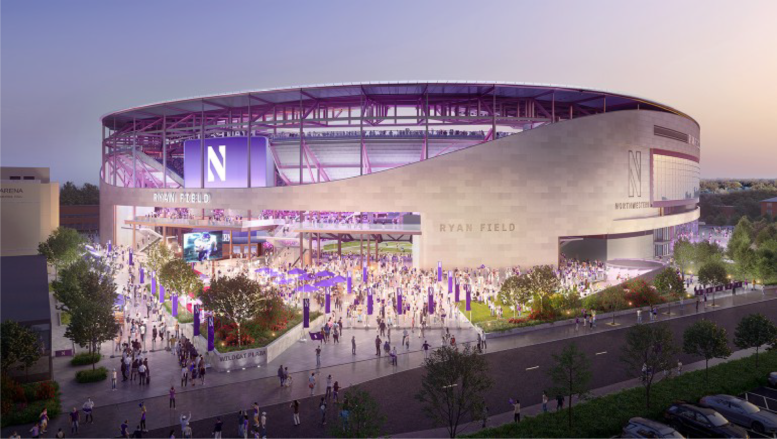 Plans have been revealed for a new football stadium at 1505 Central Street in Evanston. Located on the intersection with Ashland Avenue, the new structure for Northwestern University will replace the existing venue within their sports complex which also features an indoor arena as well as a baseball diamond. The university is leading the development efforts with Kansas City-based architects HNTB and globally based Perkins & Will serving as the designers, both of which have worked on similar facilities. 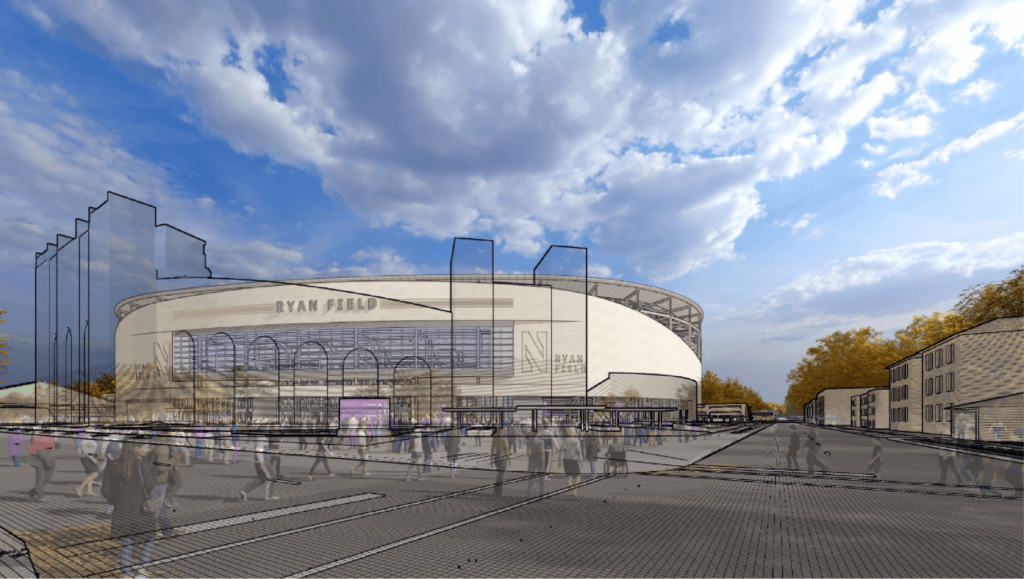 Most recently renovated in 1996, the existing stadium holds roughly 47,000 attendees and is one of the smaller venues for a Big Ten Conference team, that being the Northwestern Wildcats. Named after Aon Corporation founder Patrick G. Ryan who was a chairman at the university, it is also the only Division I stadium without permanent lighting which limits game times frequently. Given the issues the school faces in trying to fully fill the facility for events, with visitors often providing large numbers, and the forecast for crowds in their foreseeable future, it is no surprise they are moving forward with a redesign. 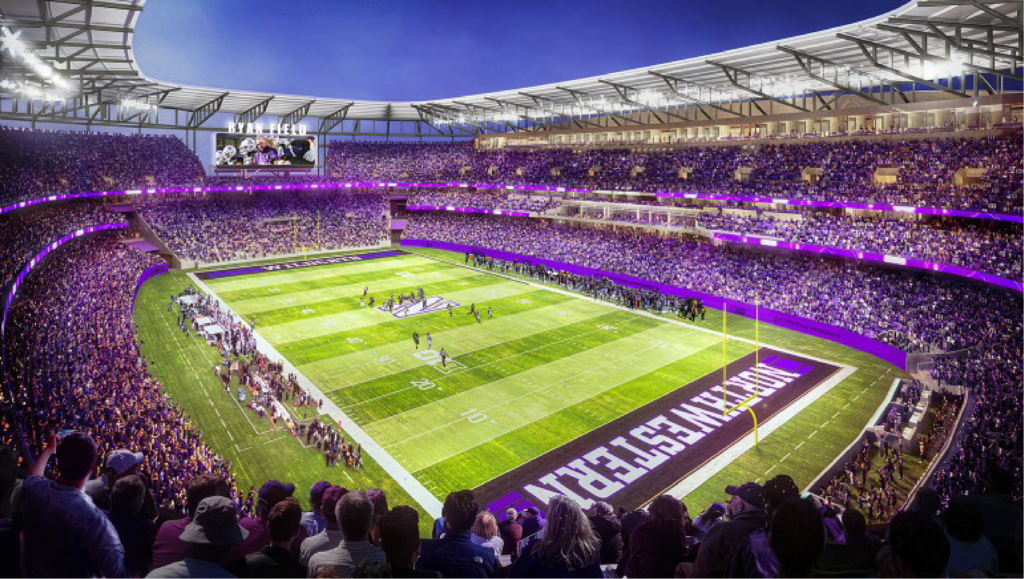 The new state-of-the-art stadium will solve many of the existing problems while trying to appease the surrounding neighbors by decreasing in size and scale from the original, thus creating an accessible, sustainable, year-round community asset according to the university. It features 25 percent, or 12,000 fewer seats, with a new capacity of 35,000 attendees utilizing actual individual seats instead of the current benches. The smaller size will also allow for some of the best sightlines in the nation, with all seats closer to the field than those in just the lower bowl of the Notre Dame stadium in South Bend. 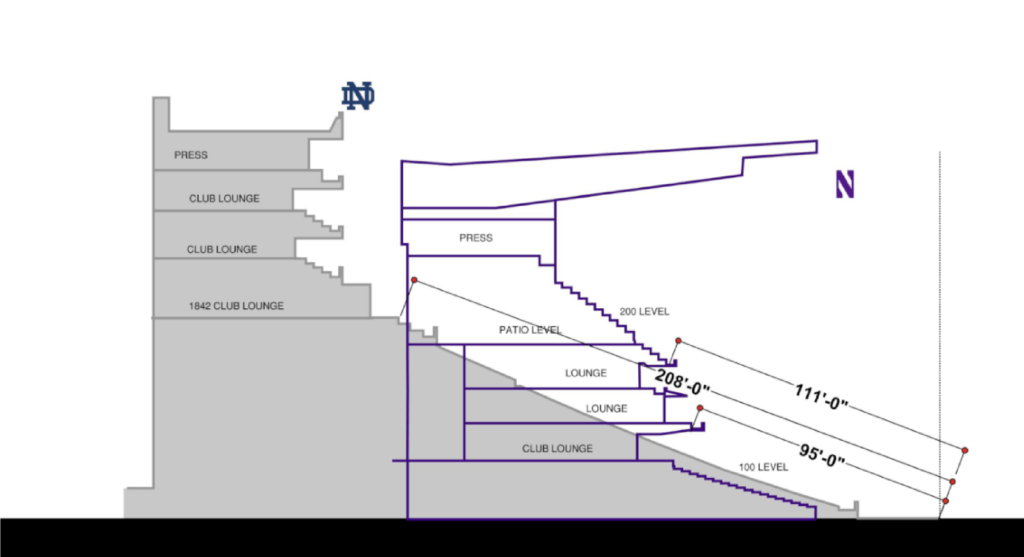 A large edge canopy will keep patrons dry and safe during events that will be coupled with a new landscaping buffer to help reduce the impact of noise and light into the neighborhood. In hopes to create one of the most accessible stadiums in the nation, the designers are following Universal Design Standards and creating new plazas and a small community park to fully integrate the stone clad structure into the town. The facility will also be LEED Gold Certified which will include reduced water usage, passive lighting, and more. 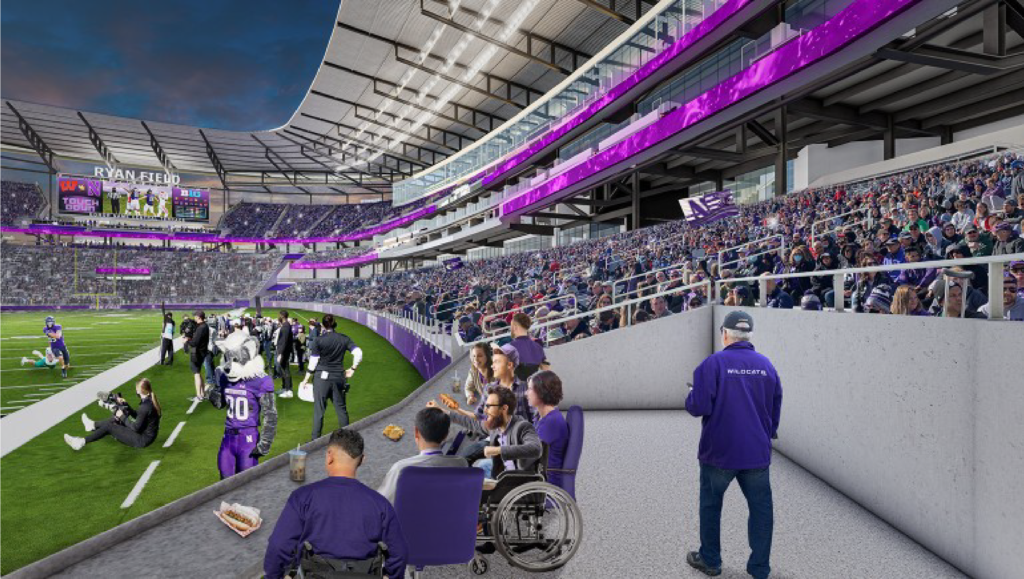 The nearly $800 million project will be completely privately funded via multiple large alumni gifts which were some of the largest in the university’s history. It will also contribute $10 million to Evanston in the form of fees, have an indirect economic impact of $600 million, and create 2,900 temporary construction jobs. The university has stated that none of the work will cause an increase in tuition cost nor cut salaries, and is exploring the idea of hosting concerts to supplement yearly gains. 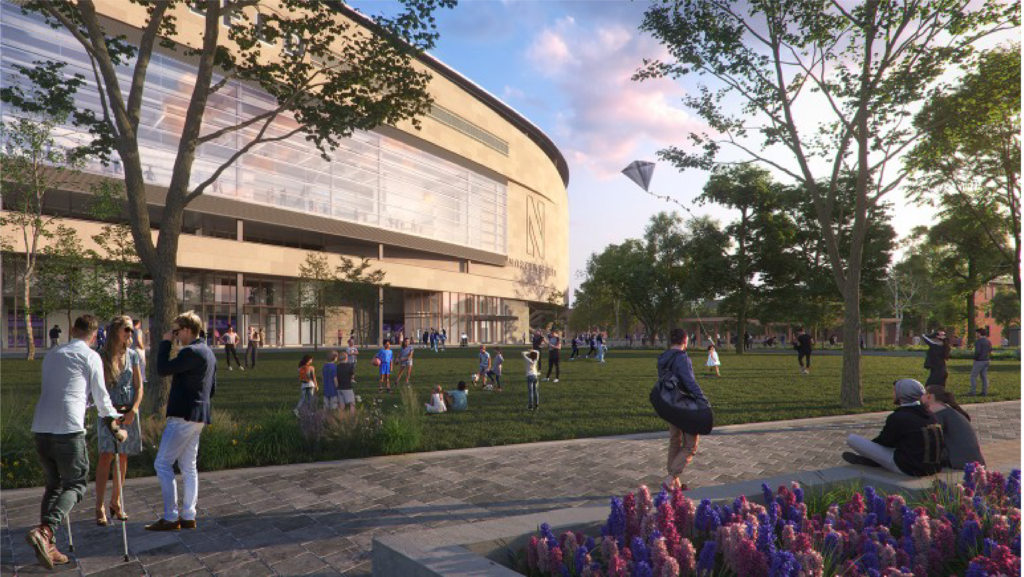 Aside from the aforementioned features to appease the community, lowering traffic is the next goal with the university considering a complimentary bike valet program and working with public transit systems to offer a better service during events. At the moment no construction timeline has been announced, but a potential completion date of 2026 has been reported by WTTW, the project will now need to move forward with outreach meetings and go through Evanston City Council before applying for construction permits.