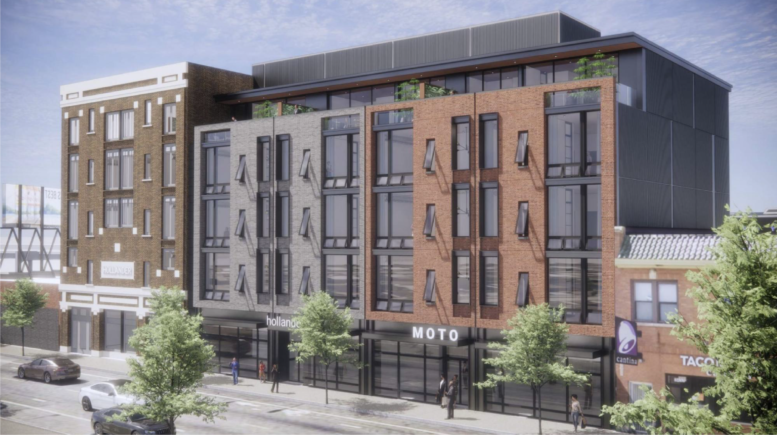 Updated plans have been revealed for the mixed-use redevelopment of the Hollander Building at 2422 N Milwaukee Avenue in Logan Square. Located just northwest of the intersection with W Fullerton Avenue and backed by the CTA Blue Line tracks, the upcoming project will also expand into the two lots next door replacing a one-story commercial structure. Developers GW Properties brings us the latest attempt at revamping the vacant building with local architecture firm NORR responsible for the design. 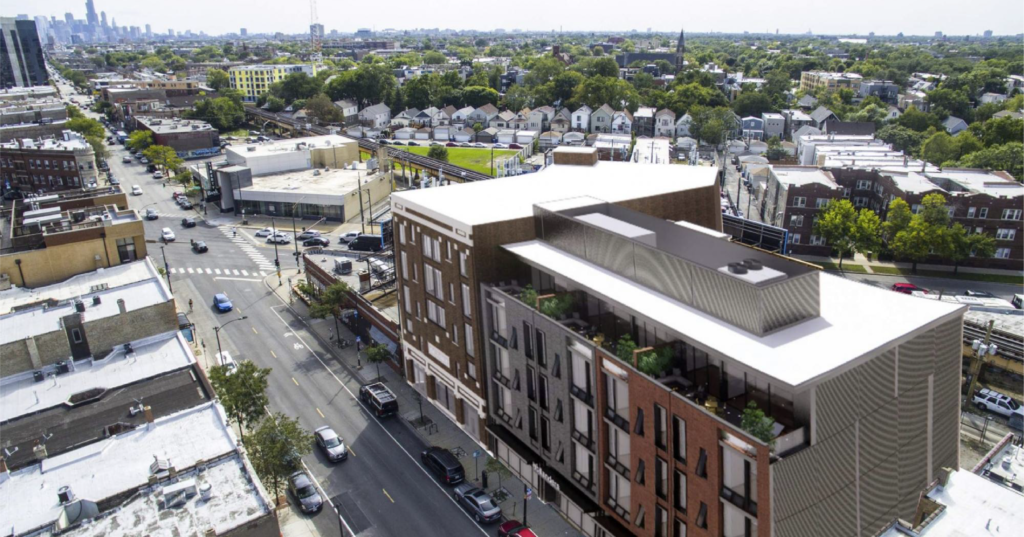 Built in 1912 for the Hollander storage and moving company which operated in the city since 1888, the building and company passed down within the Hollander family till this day where it operates out of Elk Grove. The structure was utilized by them until 2018 when it was sold to the developer and has sat vacant since. However it saw two prior iterations, with its original 2019 option adding a five-story addition next door before being sized down to a one-story commercial addition in 2021, it has now been updated again. 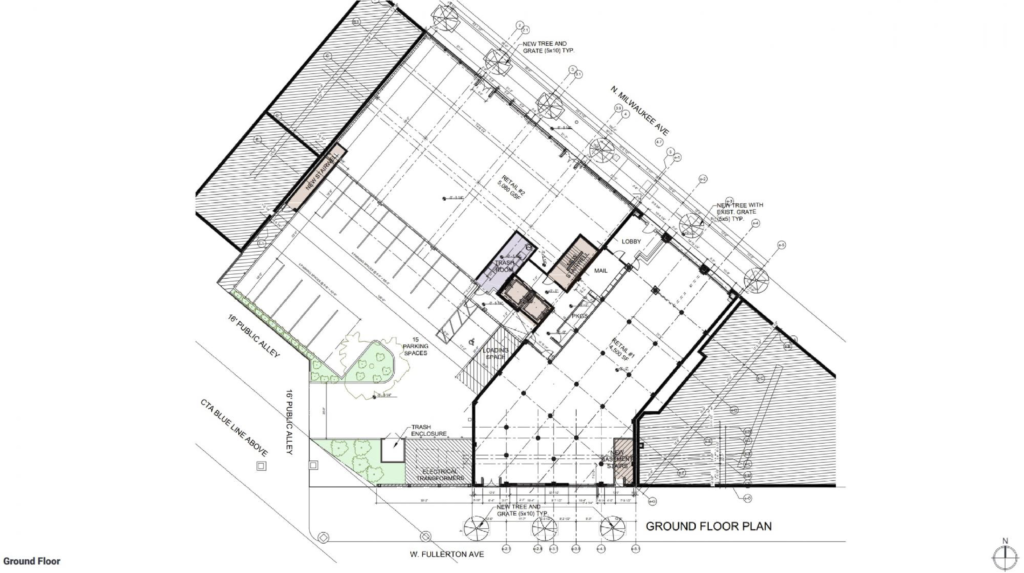 Not too different from the 2019 design, the new proposal will bring a five-story, 74-foot-tall addition on the aforementioned adjacent lots. The Hollander Building itself will receive various exterior repairs in order to preserve its facade for years to come, while the inside will be gutted and re-designed. Its first floor will contain a 4,500-square-foot retail space with 5,000 square feet on the first floor of the new construction, along with a small lobby, 15 vehicle parking spaces, as well as bicycle parking spaces and tenant storage in the basement level. 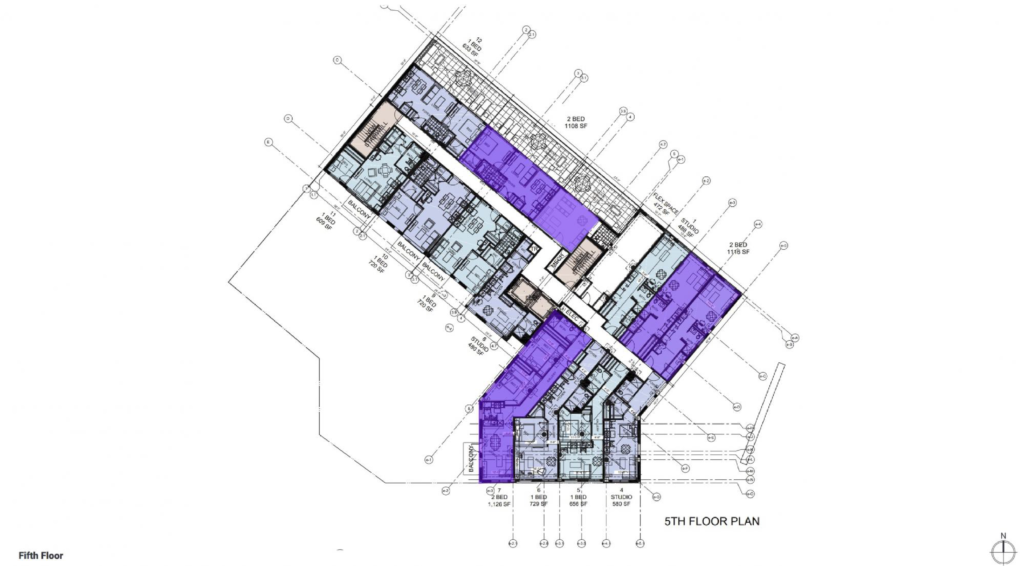 Above that will be 57 residential units made up of 15 studios averaging around 480 square feet, 33 one-bedrooms averaging 720 square feet, and nine two-bedroom layouts averaging 1,120 square feet. These will include two on the last floor which will have private terraces, with a third outdoor space connected to an amenity flex-space. Being offered as rental apartments, 15 percent of those will be considered affordable with a Montessori school and salon already signed to occupy the first floor. 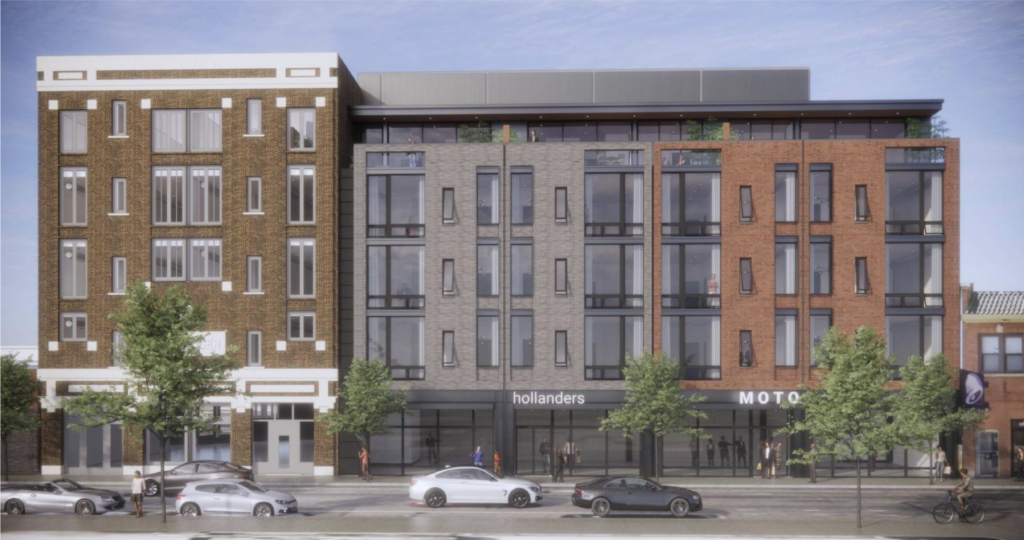 Future residents will have direct bus access to CTA Routes 56 and 74, along with Route 76, and both CTA Logan Square and Western stations serviced by the Blue Line, all within a five-minute walk. Nearby various other projects are seeing a new life including the Grace’s Furniture Building which could become a new fitness club. The project will now go in for community input, requiring alderman approval who supported the 2019 proposal as well. At the moment no construction timeline has been announced, but after it receives city approvals it could take up to 24 months for completion.