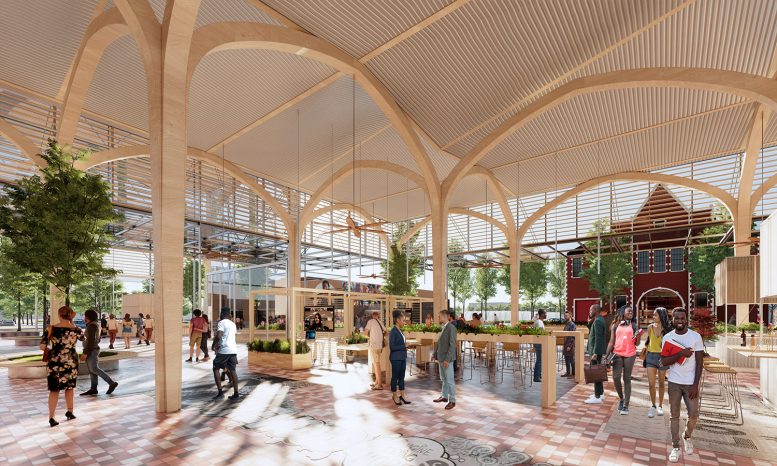 Updated plans have been revealed for the Englewood Connect Invest South/West development in Englewood. The winning project for the RFP was selected earlier this year and is now back with updated phasing plans and further details on each part of the design. Sitting north of the existing Whole Foods near the intersection of S Peoria Drive and S Halsted Street, developers McLaurin Development and Farpoint Development tapped Skidmore, Owings & Merrill and TNS Studio to design the large complex. 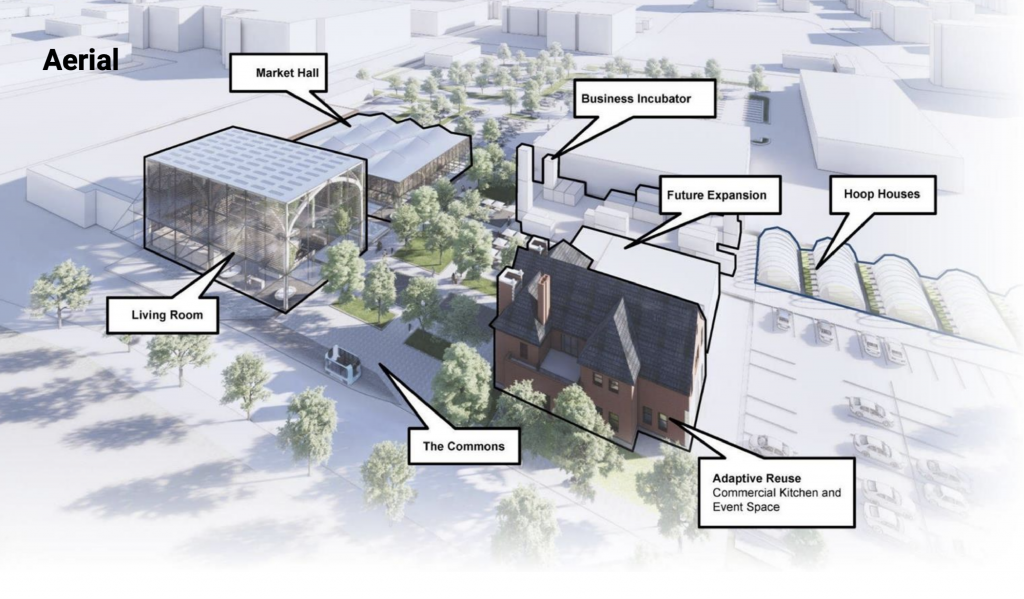 The multi-phase development is focused on providing spaces for local businesses with an emphasis on food vendors and education, while deeply involving the local community into the activation of the site. The project is made up of five zones/structures, the culinary center and event space which will be constructed using the existing firehouse, the hoop houses that are year-round greenhouses, the Englewood living room which is a large community gathering space, the flexible business incubator, and the shed that serves as a marketplace addition adjacent to the living room. 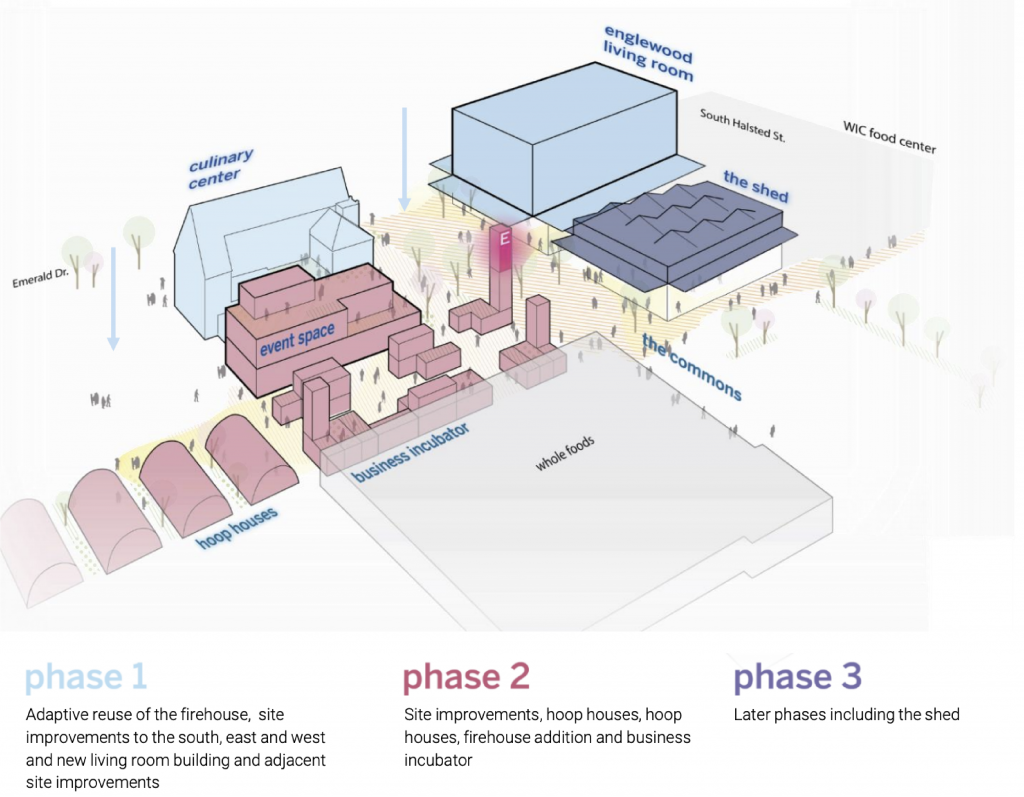 While the initial phasing plan called for the culinary center to be built at first alone, updated plans now show the living room across from the firehouse and joining phase one. Phase two will include the hoop houses, the event space extension to the firehouse, and the business incubator area, leaving the relocated shed building as the final and third phase. Extensive site improvements including major seating plazas, art, a parking lot, and fruit tree orchard are also part of phase one. 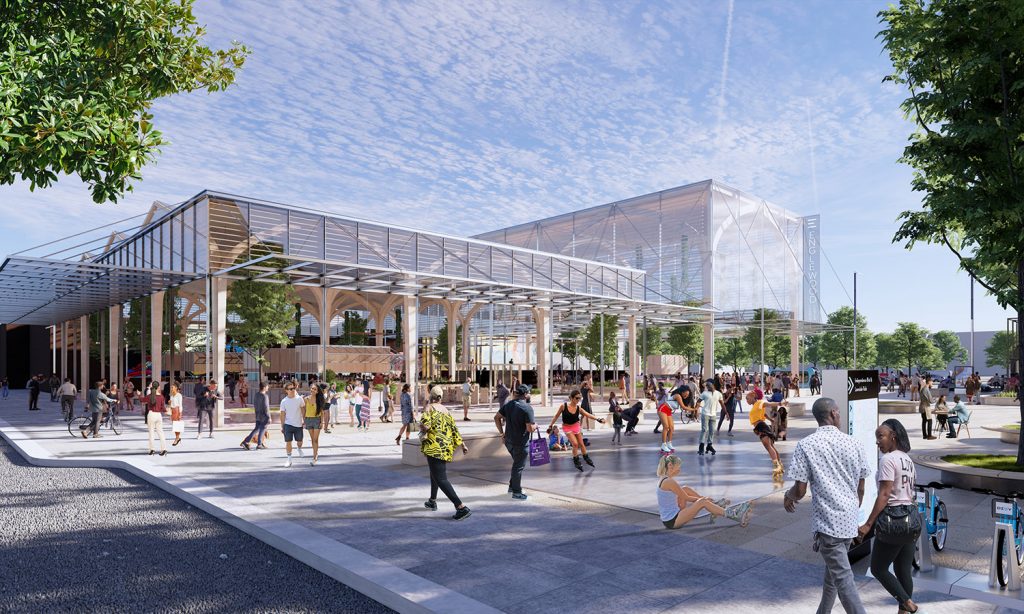 Phase 3 of Englewood Connect by SOM

The timber-structured living room building will be a breathable design with multiple open sides and plenty of architectural shading. Featuring hanging gardens, a cafe, performance spaces, conference/meeting spaces, and farm tables, the multi-story design will now sit across from the culinary center and frame the historical existing building. The restored firehouse will hold lounge rooms, event spaces, an industrial kitchen, and multiple outdoor terraces among other updates previously covered. 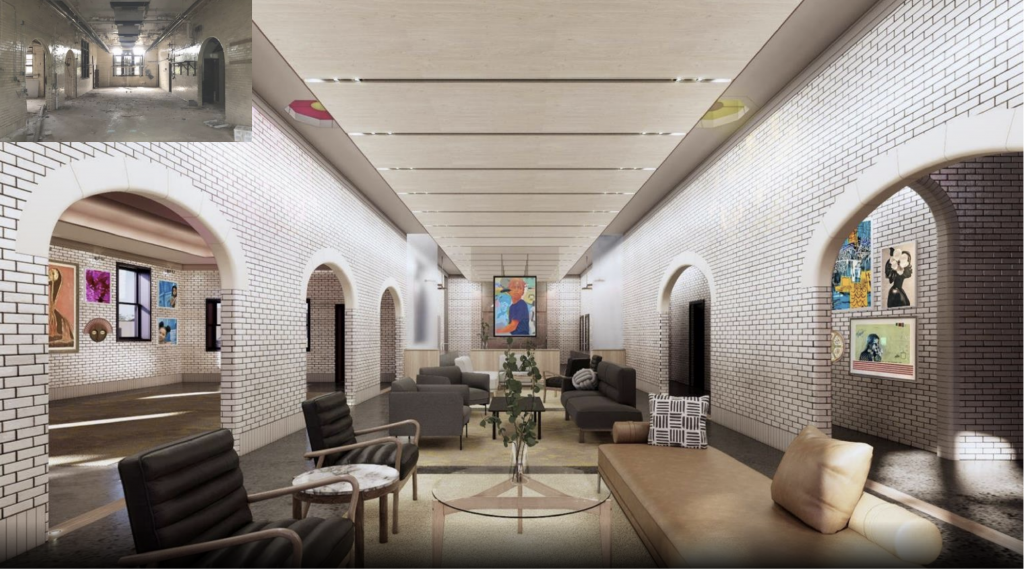 Interior rendering of rehabilitated firehouse of Englewood Connect by SOM

Visitors to the future complex will have bus access to CTA Routes 8 and 63 at the edges of the new building via a two-minute walk away. Developers hope to begin work early next year on the $10.3 million project but will need various more approvals including City Council before doing so.