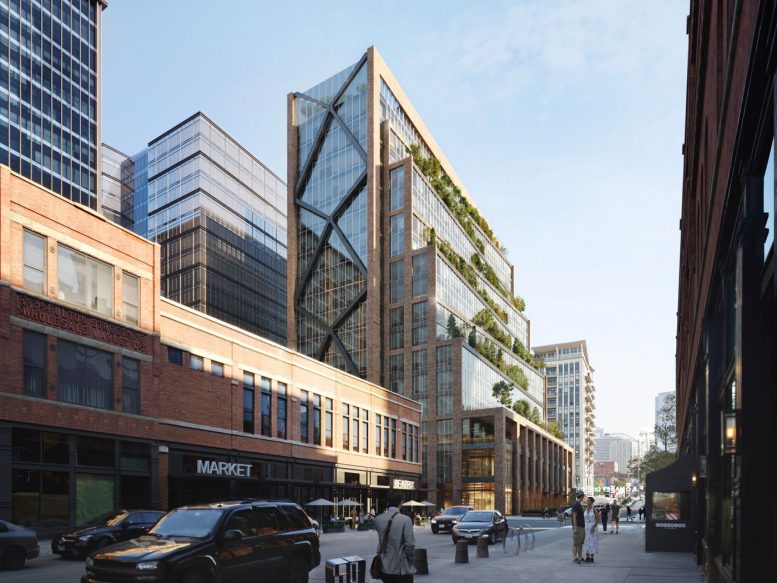 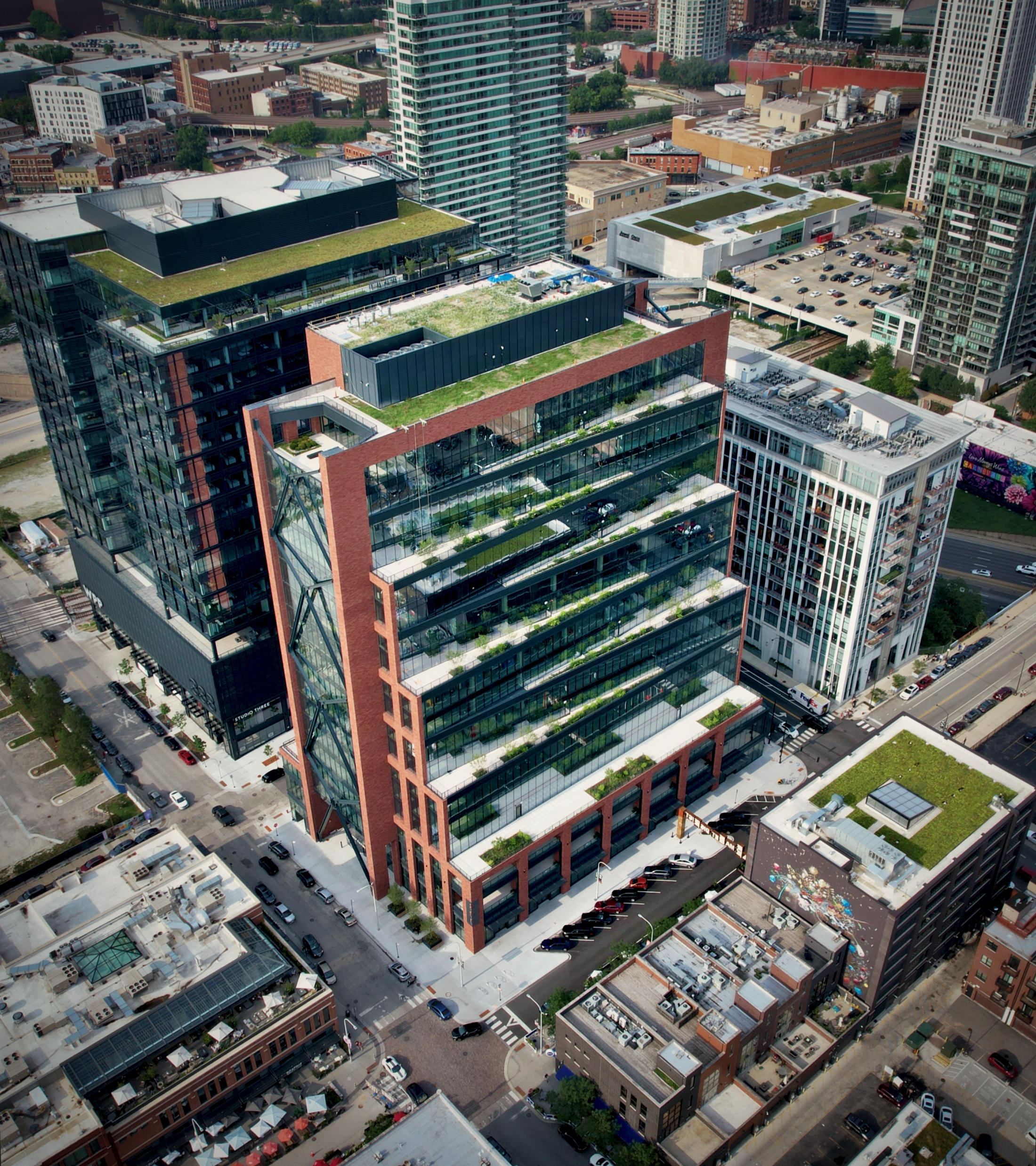 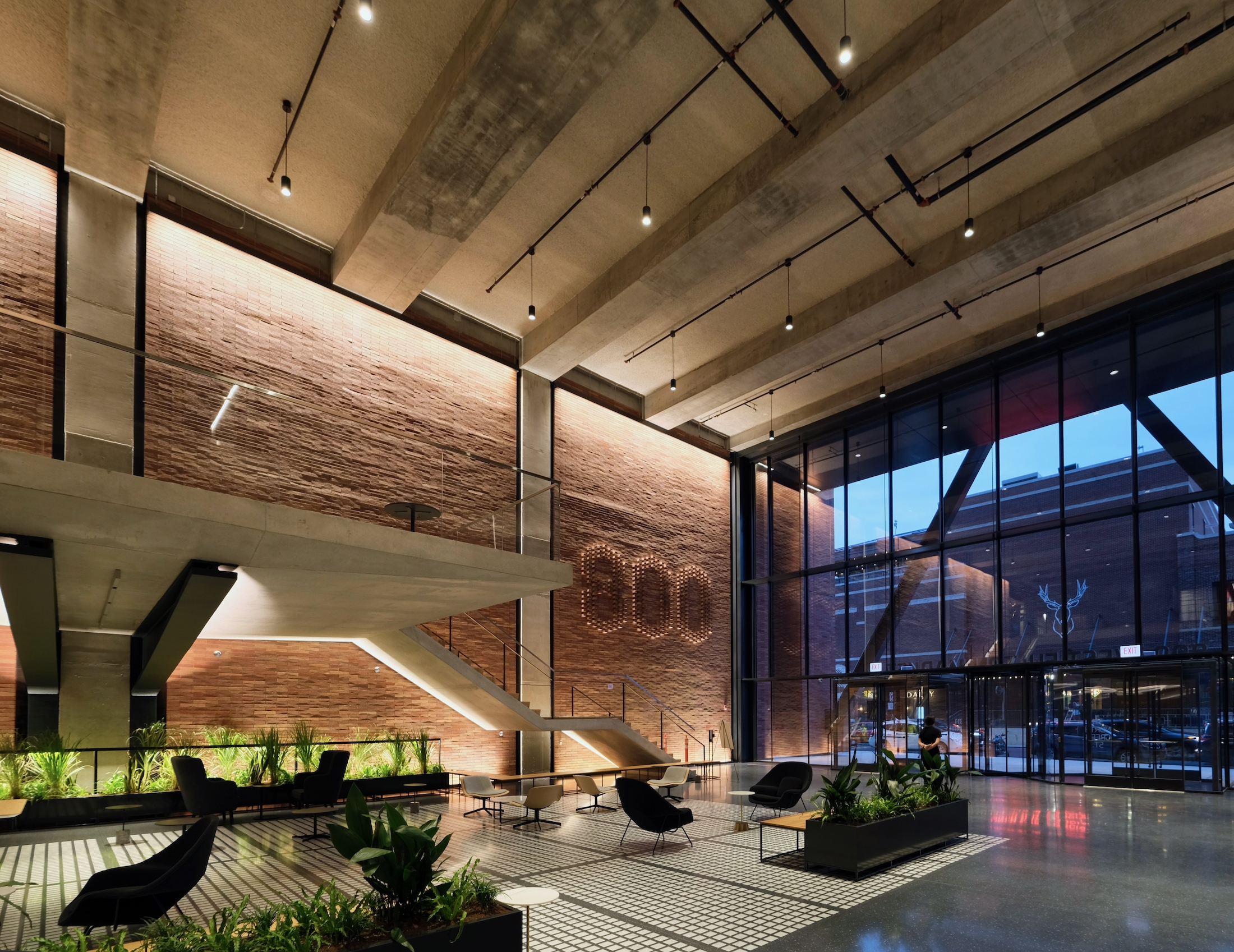 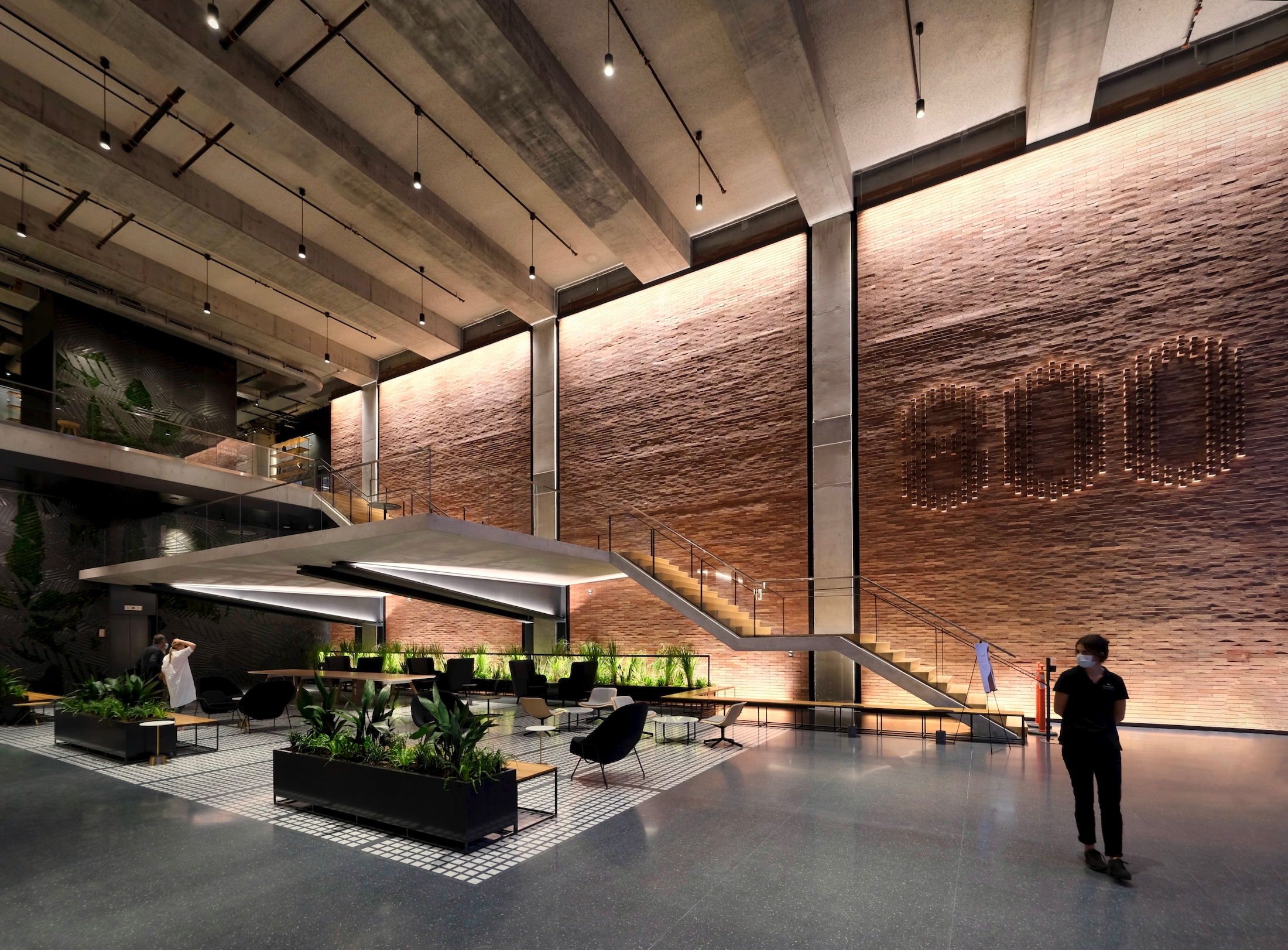 Amenities include a fully-equipped fitness center and various conference rooms and prefunction space on the second floor. As seen in photos, tenants are welcomed into a dual-story open lobby with sleek brick and concrete decorative finishes. One notable feature within the lobby is a cantilevered concrete staircase reminiscent of a Bond villain lair. Capping the amenity programming is a penthouse lounge and amenity terrace on the western end of the 18th floor. The 19th level offers additional common deck space with sweeping city views. 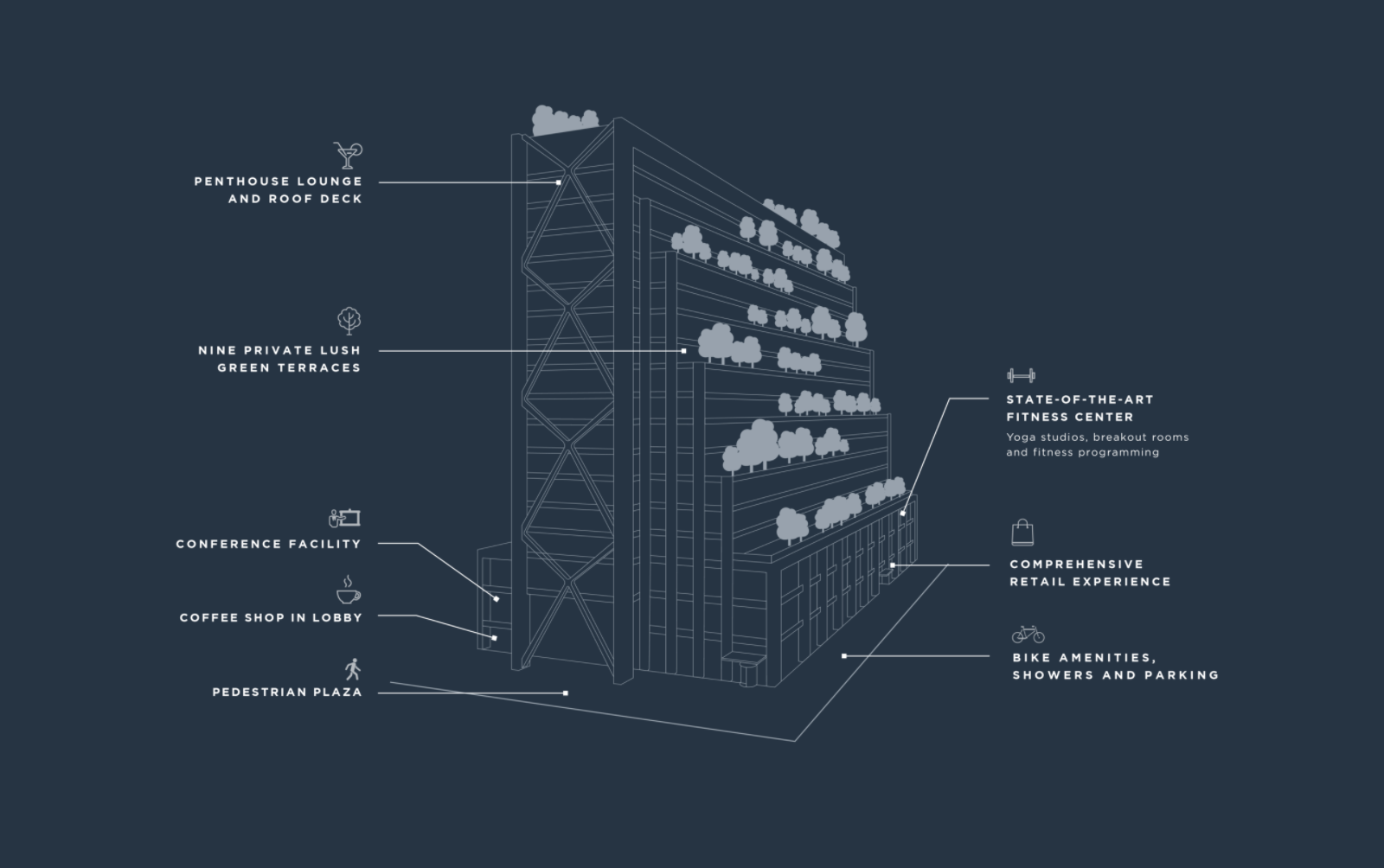 Amenities and features at 800 Fulton. Diagram via Thor Equities 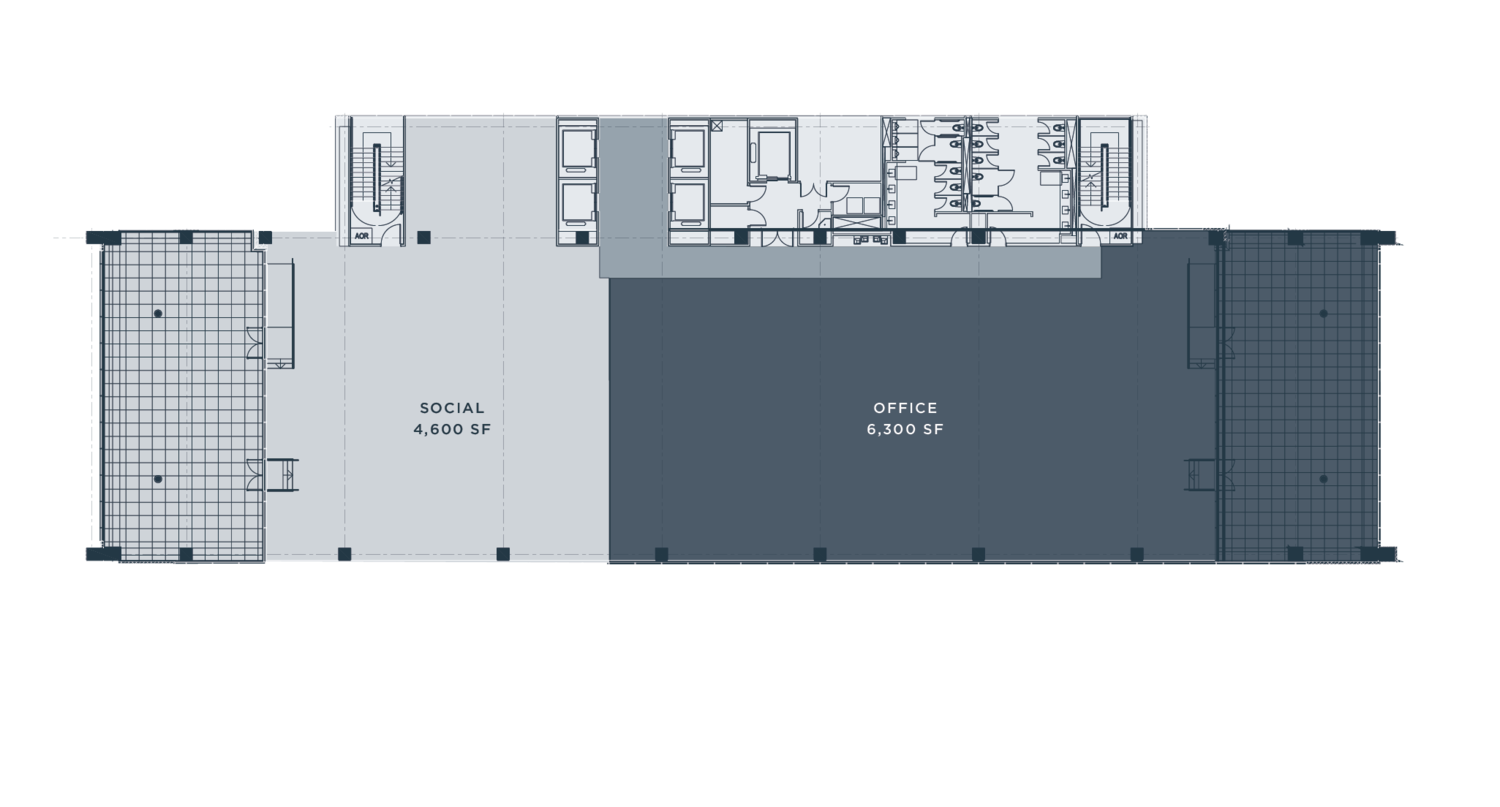 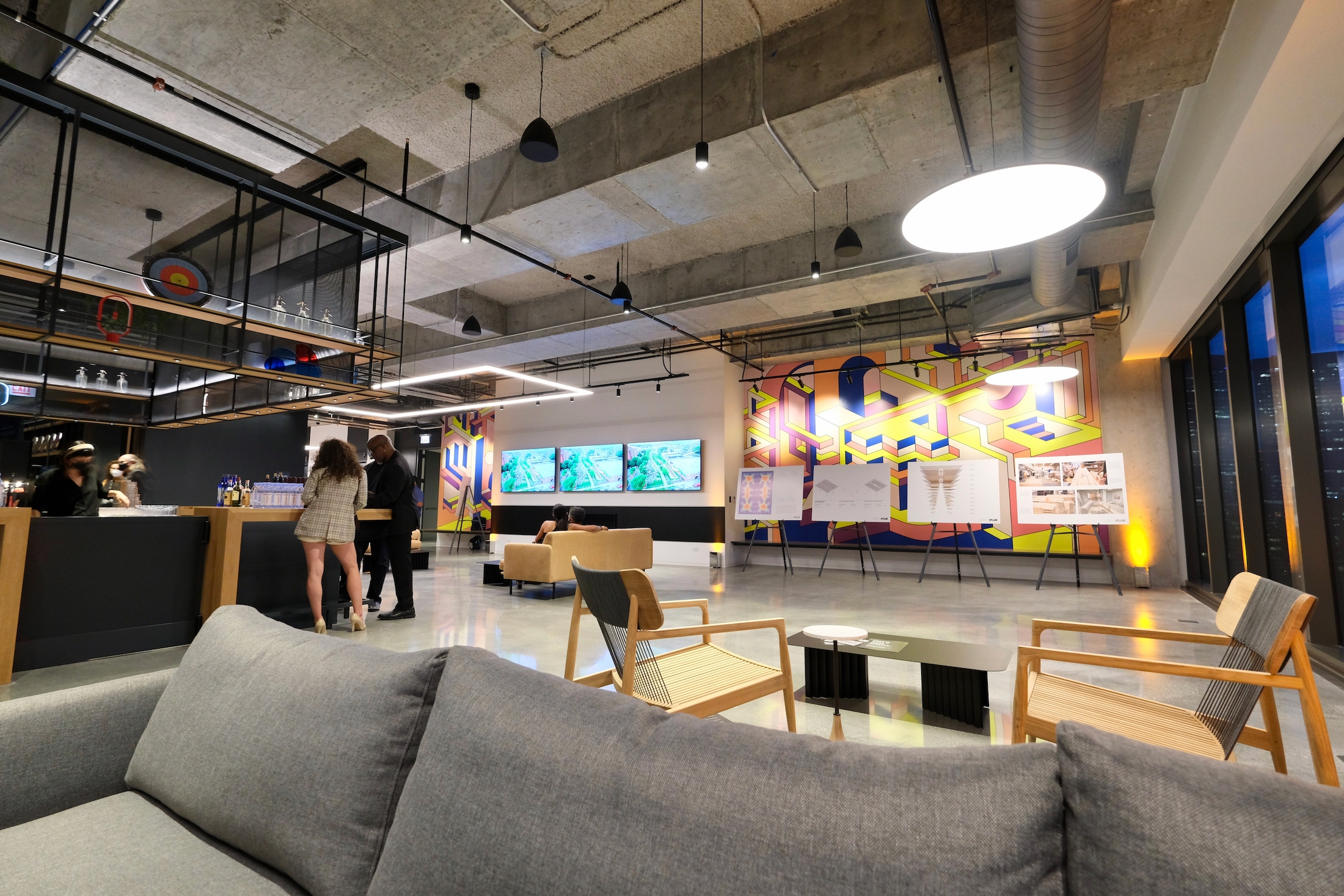 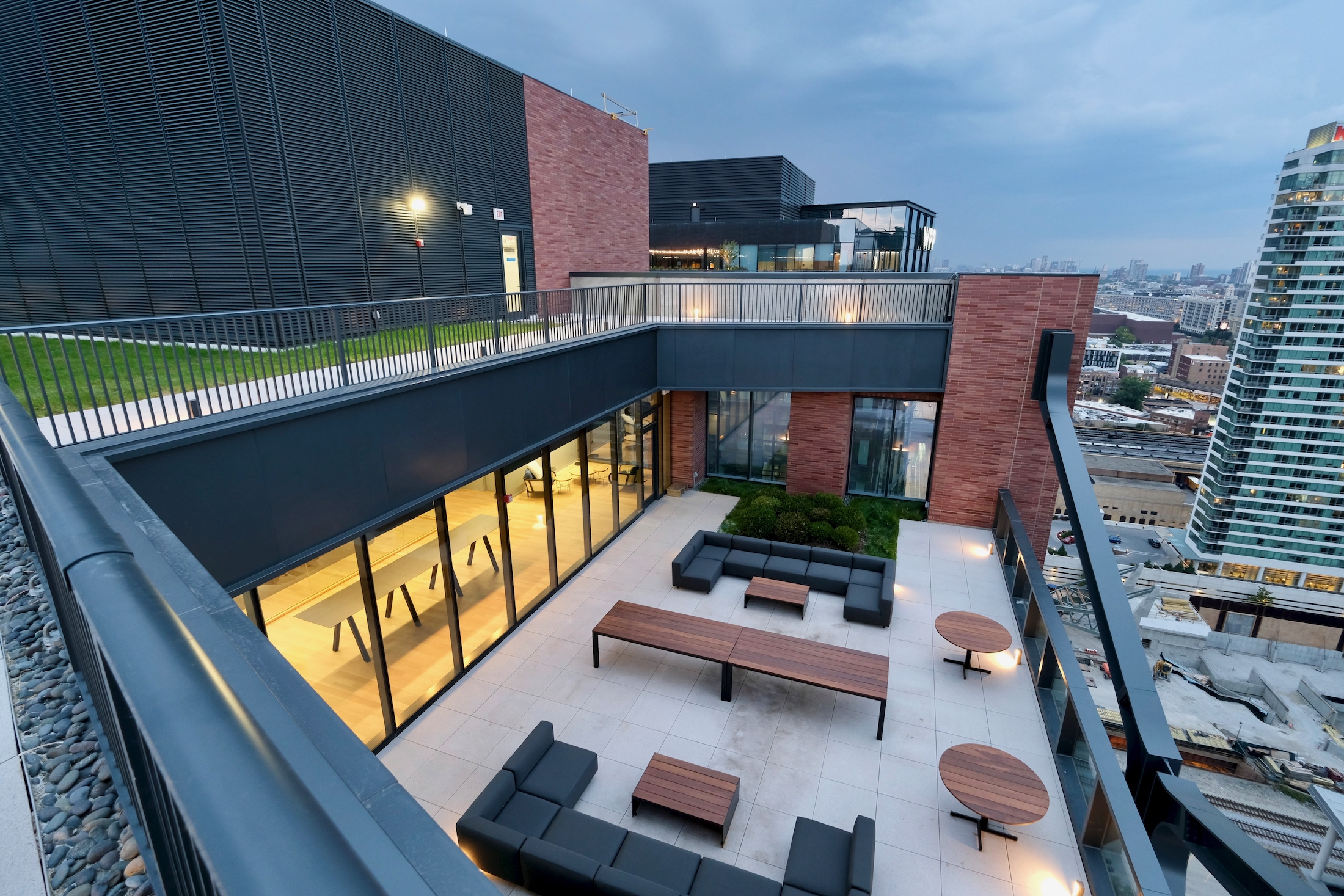 Skidmore, Owings & Merrill (SOM) is the design firm behind 800 Fulton, whose design involves a dramatic stepped massing with six alternating triangular setbacks. Each of these setbacks houses a private terrace space available to the tenants on that floor. The majority of the facade involves a red face brick and glass curtain wall, intermingled with a dark metal accents. One notable design element that also serves a functional purpose are a series of blue-tinged cross-braces along the north- and south-facing sides. These massive metal trusses not only reflect the industrial inspiration of the former meatpacking district, but also redistribute force to allow for the column-free floors. 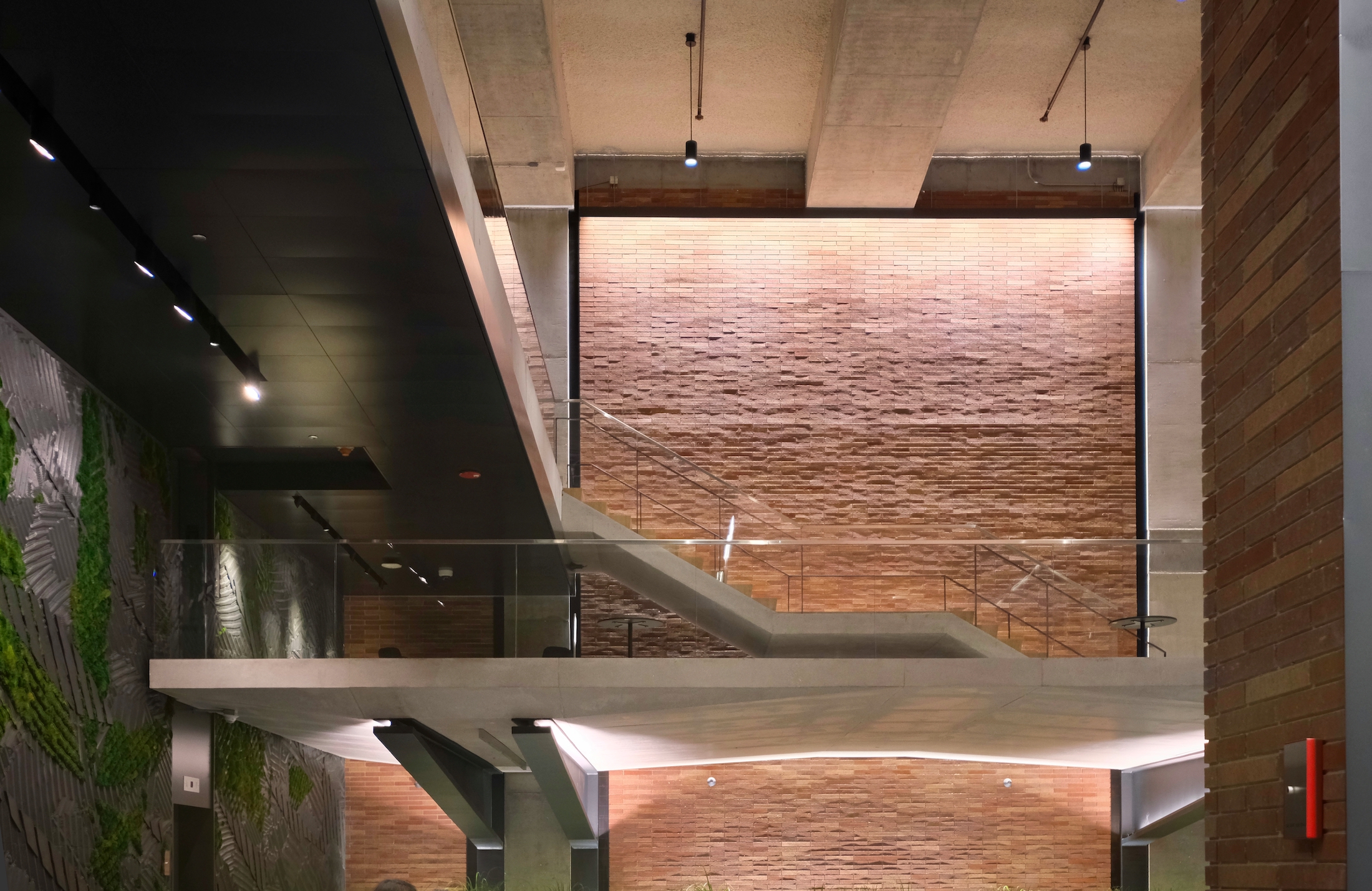 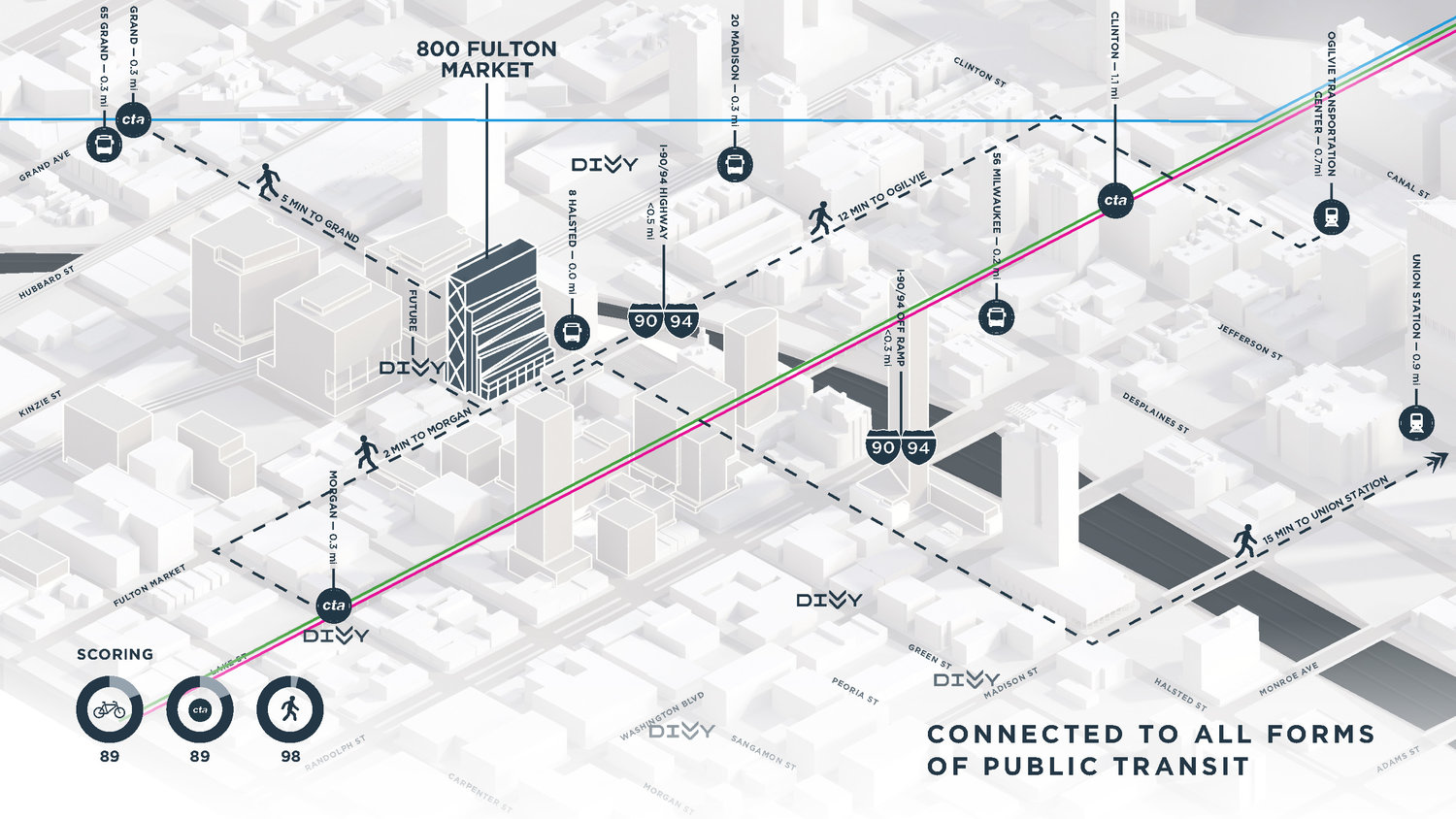 Public transit options to and from 800 Fulton. Image via Thor Equities

Parking offers tenants access to 34 parking spaces and 150 bike slots, situated in a below-ground garage. The transit-oriented nature of the project also offers access to a variety of public transportation options as well. Tenants and visitors have access to southbound stops for Route 8, directly adjacent to the site’s southeast corner, located at the intersection of Halsted & Fulton Market. Closest northbound service for Route 8 is just one block south at the intersection of Halsted & Lake. The surrounding vicinity is inundated with additional bus options, such as Route 65 to the north, Route 56 to the east, and Route 20 to the south. 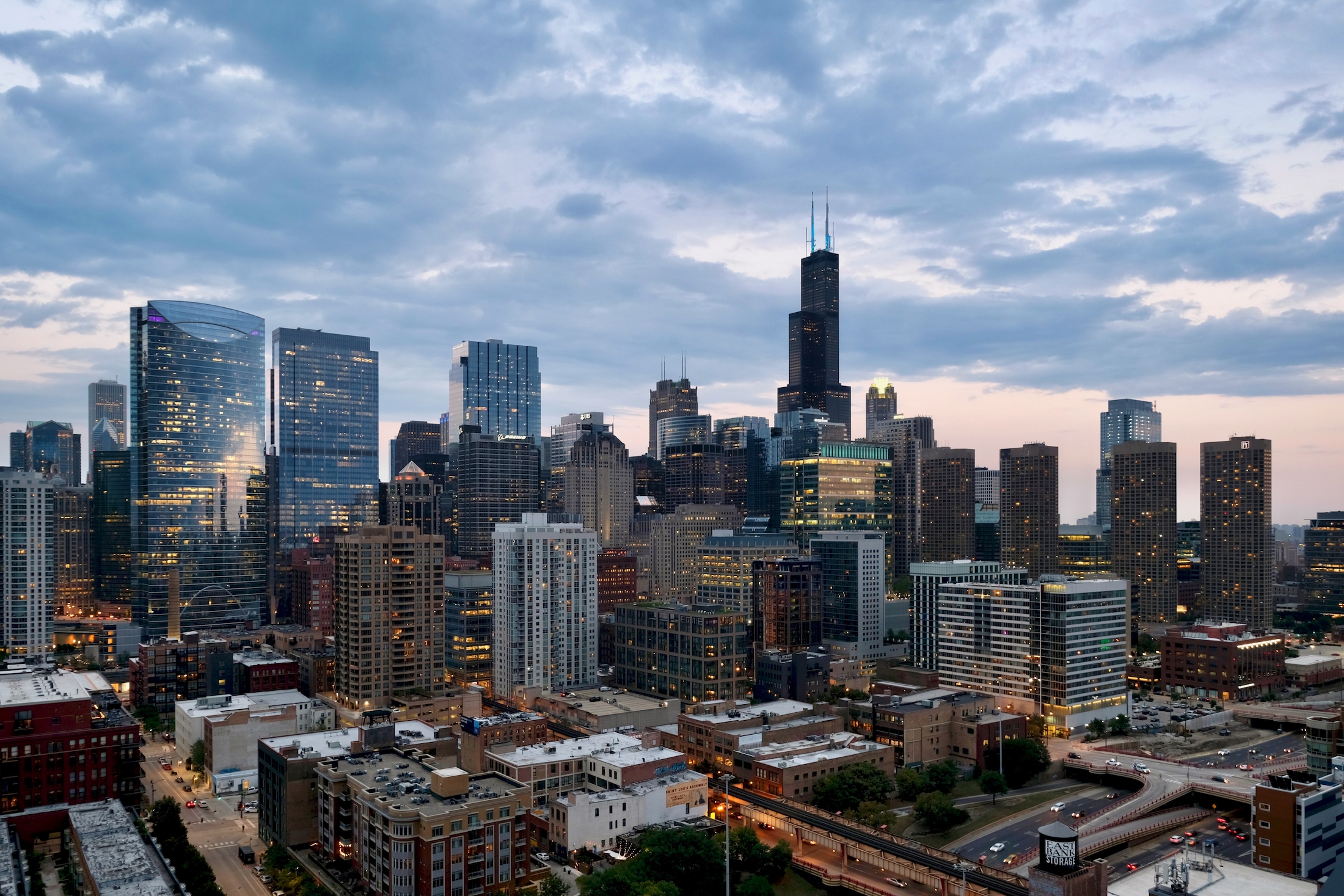 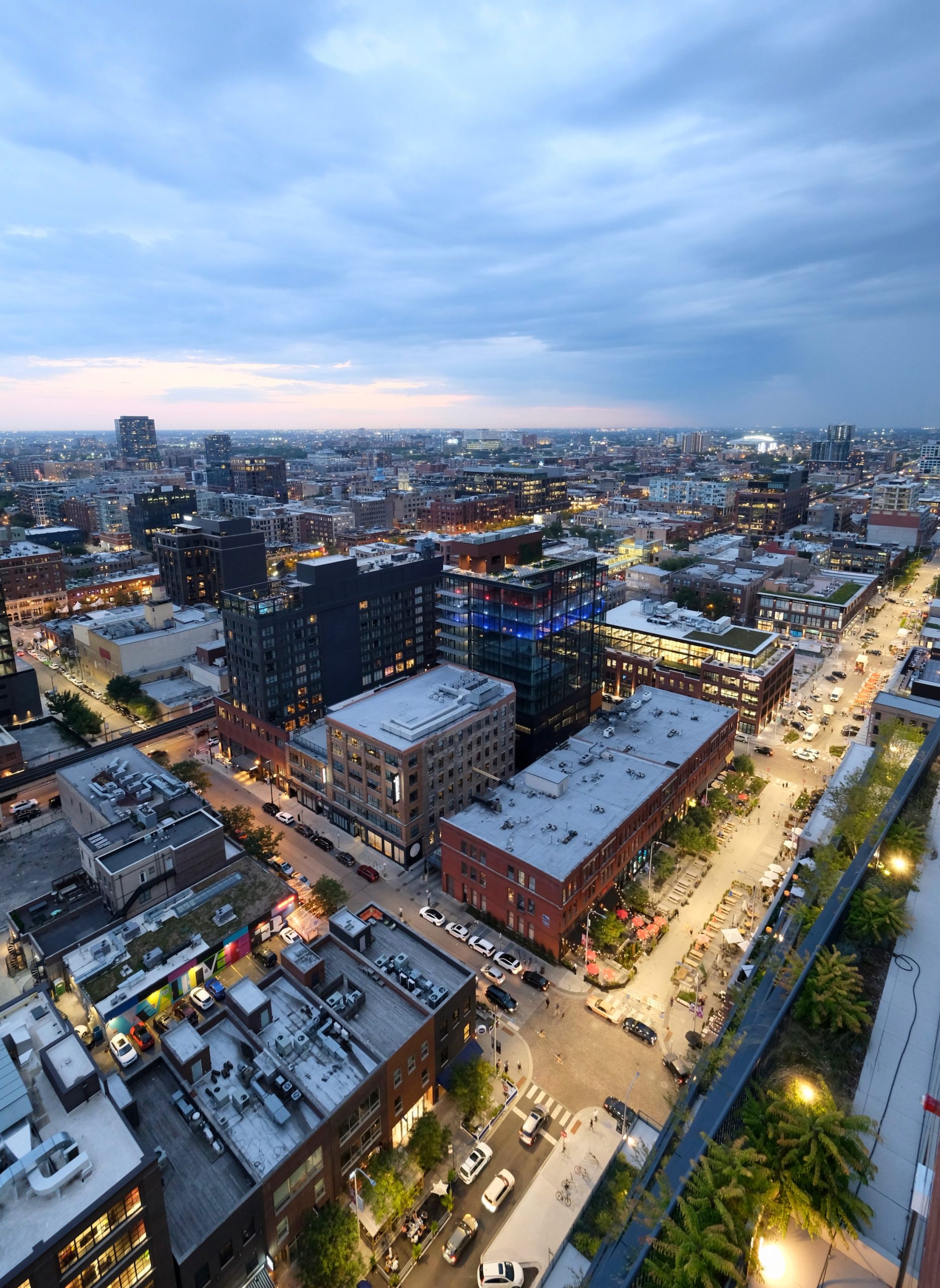 Anyone wishing to board the CTA L has close access to the Green and Pink Lines, both available via a five-minute walk southwest to Morgan station. Blue Line trains are also close by, with subway service at Grand station via a seven-minute walk north. 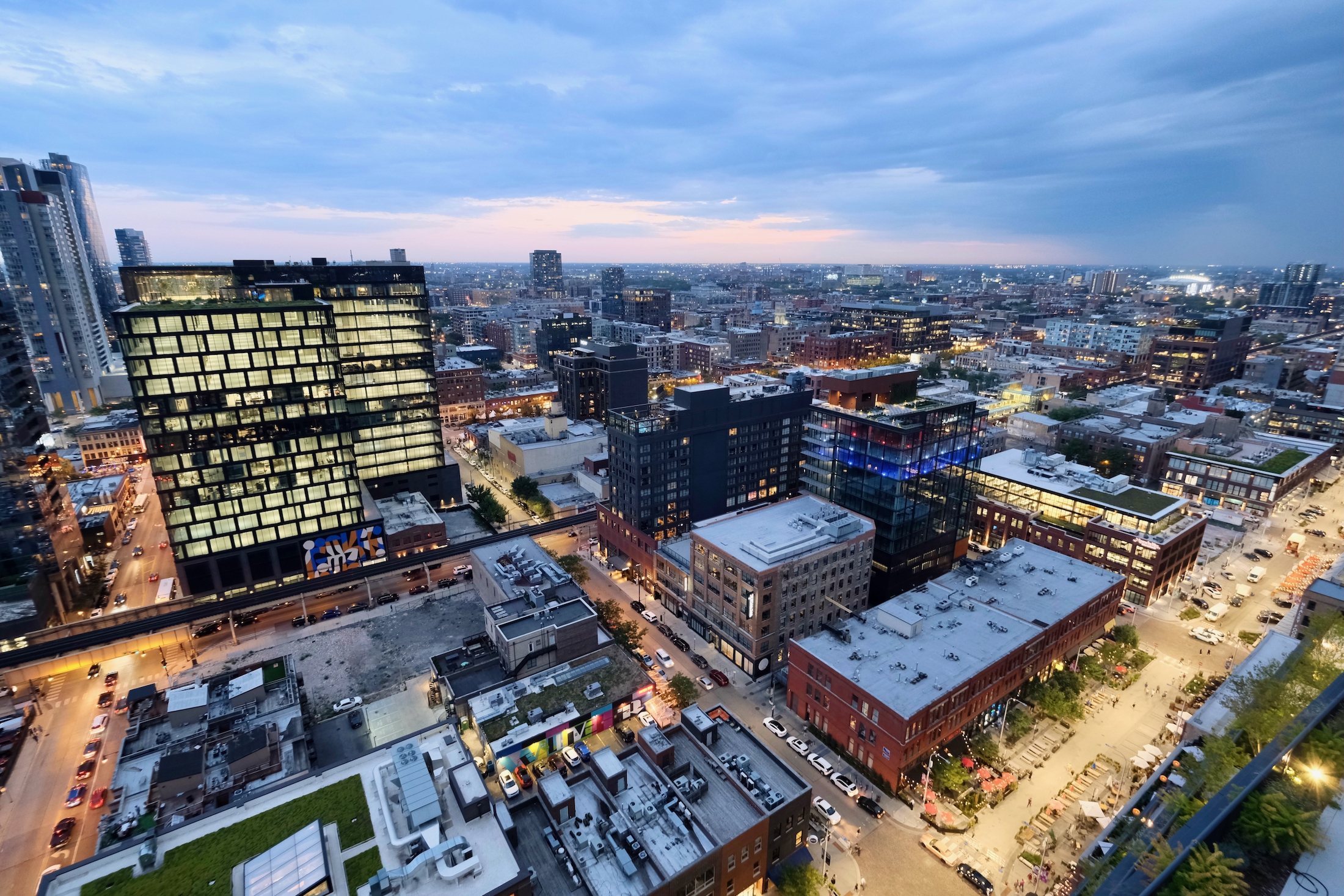 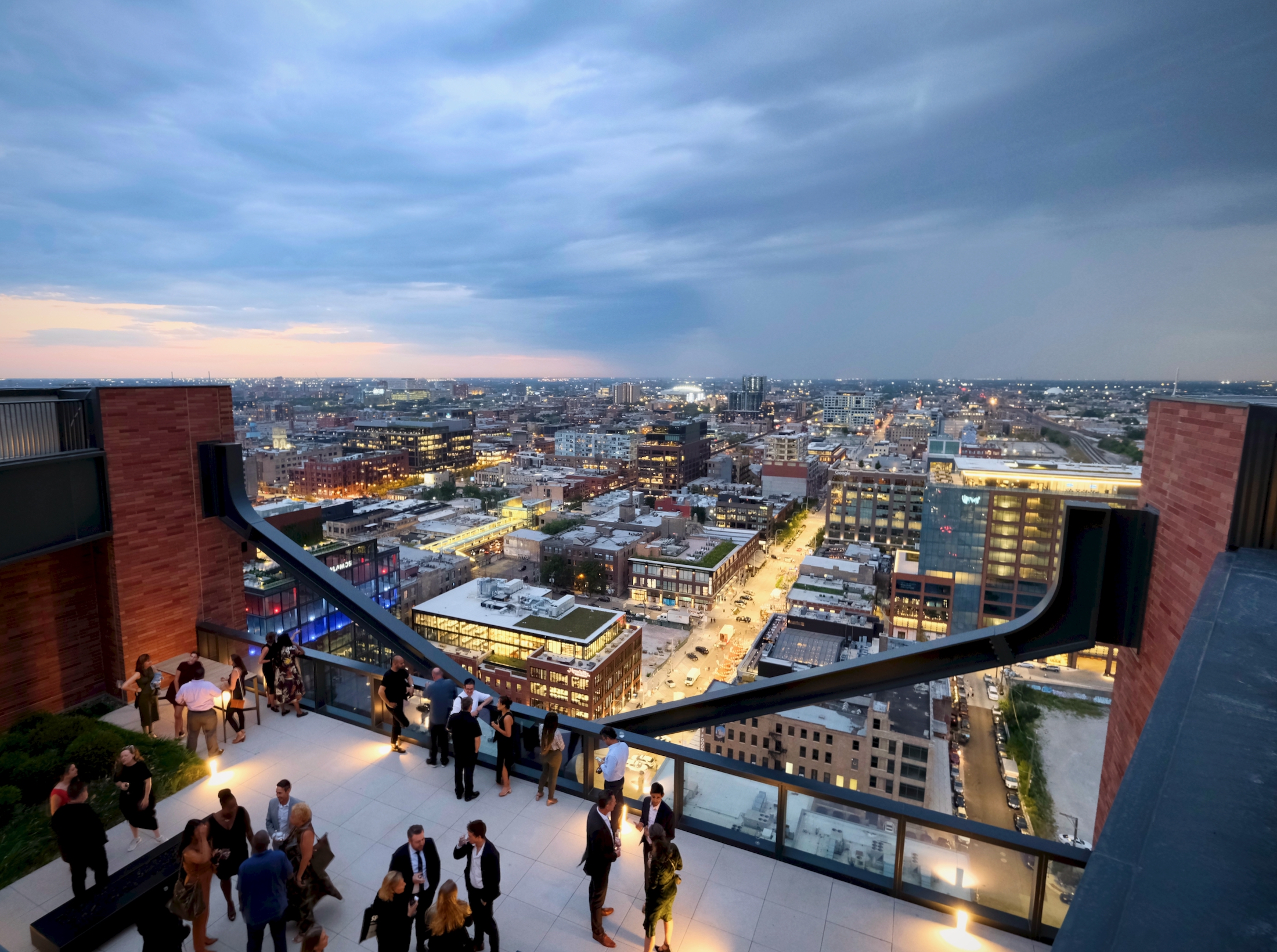 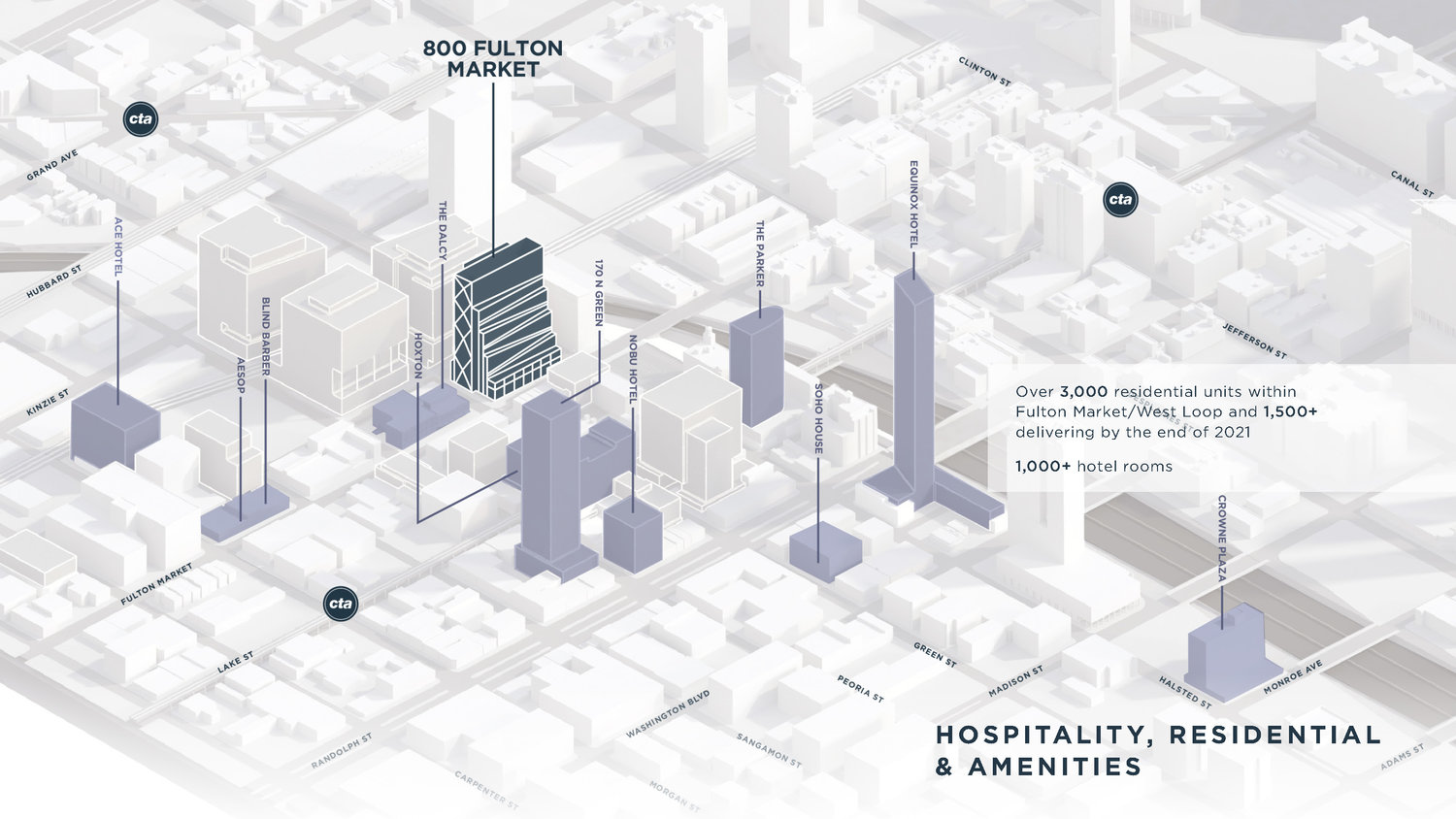 Nearby residential and hotel buildings, in development or complete (note that planned projects shown vary in stage of development). Image via Thor Equities 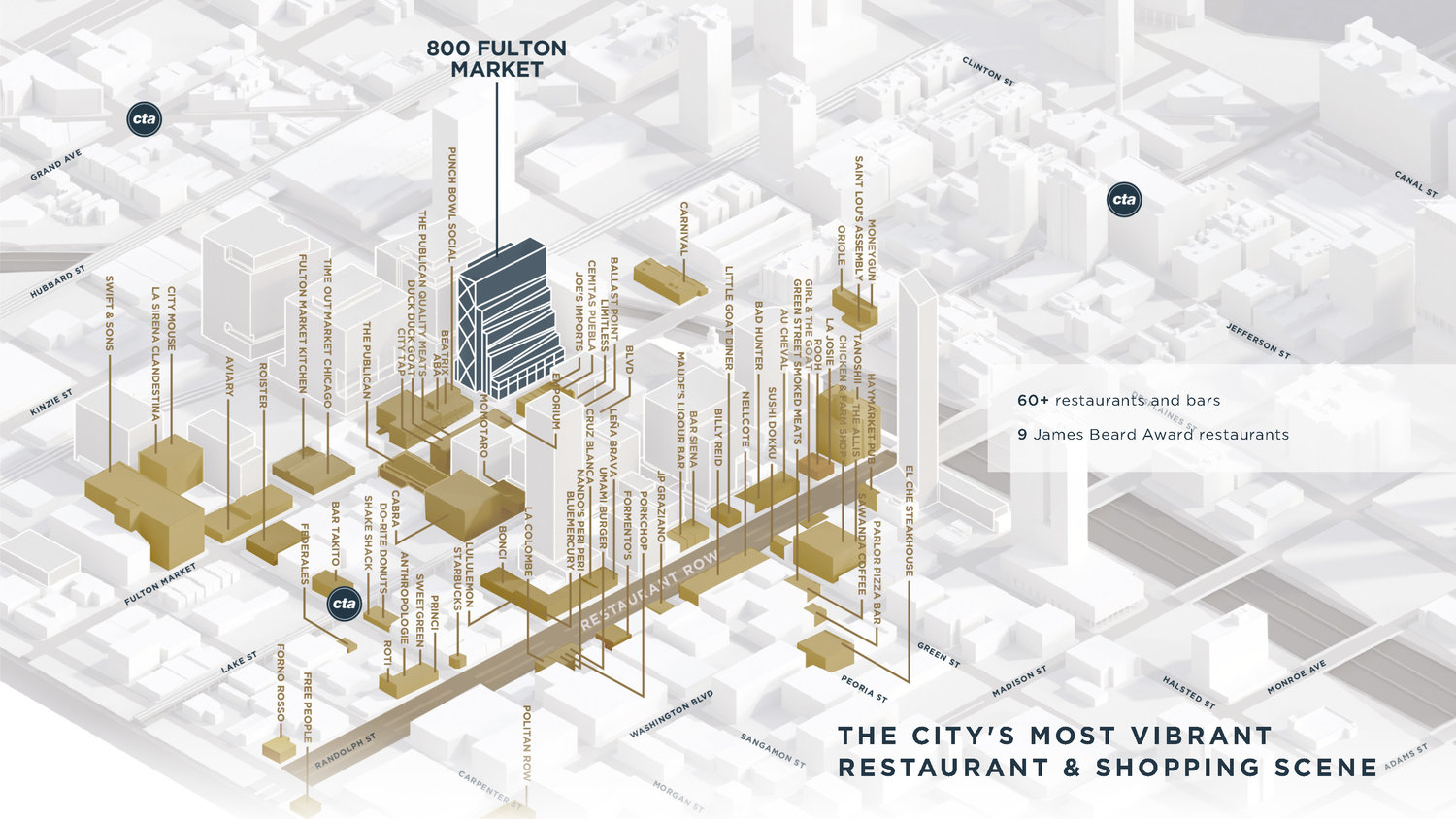 Nearby retail buildings, in development or complete (note that planned projects shown vary in stage of development). Image via Thor Equities 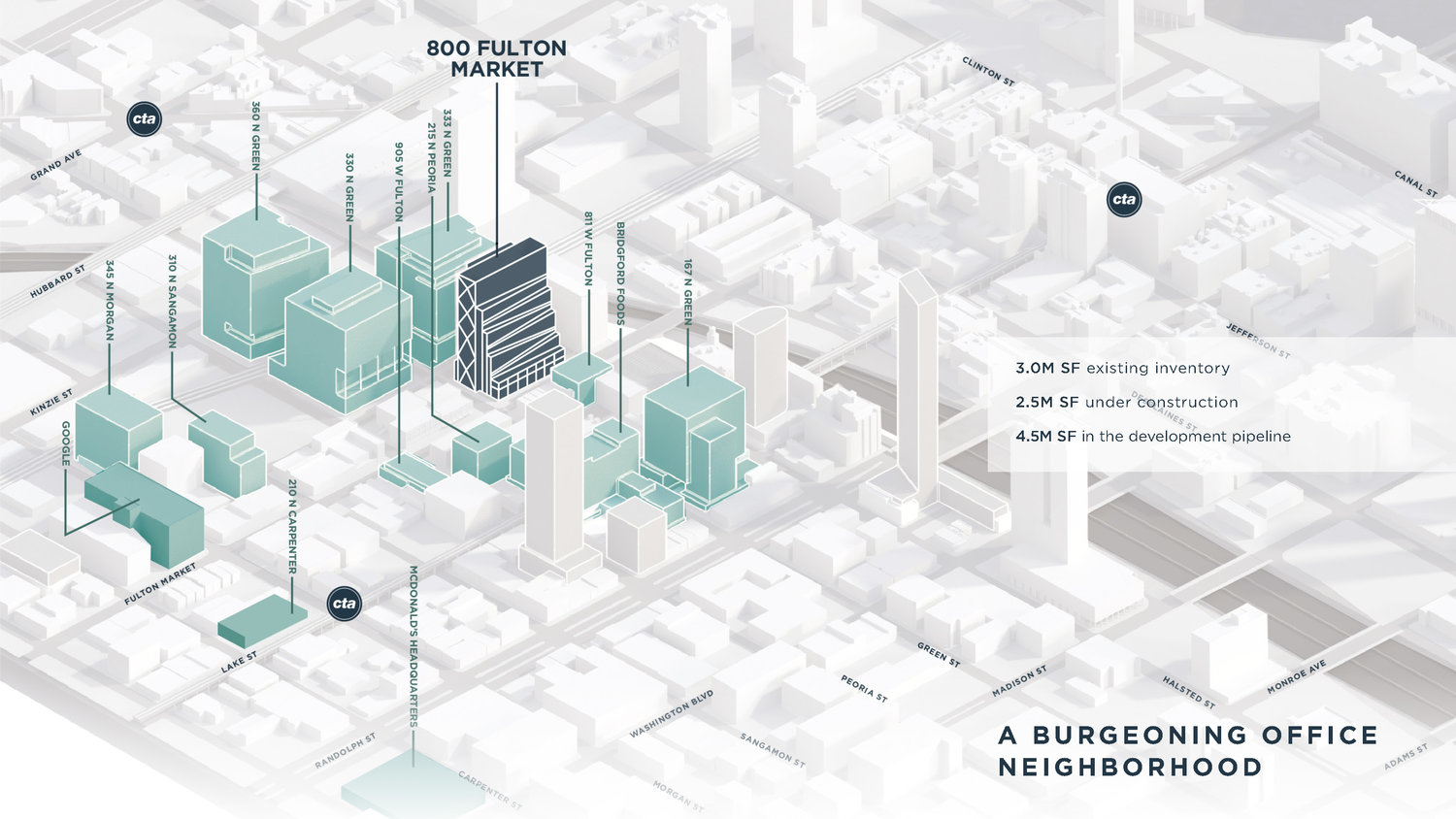 Nearby office buildings, in development or complete (note that planned projects shown vary in stage of development). Image via Thor Equities

The project is a salient example of the recent surge of large-scale developments sprouting up along West Loop’s Fulton Market and Randolph Street corridors. In 10 years’ time, the dramatic urban views from the roof of 800 Fulton will be unrecognizable, particularly toward the west as Chicago’s large-scale construction continues to expand outward.

With Lendlease having served as the general contractor, the completed edifice recently achieved LEED platinum status. Since Chicago YIMBY last covered the project in June, the final exterior touches have been completed, and both retail and office move-ins have begun.