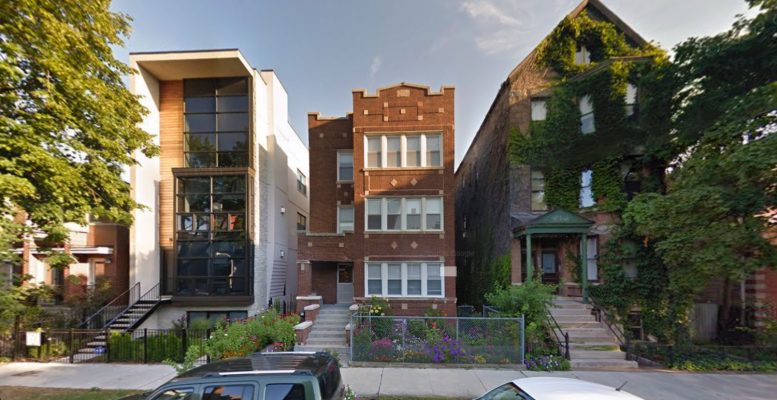 Full construction permits have been issued for a three-story apartment development at 2334 W Lyndale Street in Bucktown. Owned by 2334 West Lyndale LLC, the project will comprise of three total units along with a basement, a rooftop deck, and a detached garage with a separate rooftop deck. The new construction is set to replace a three-story masonry residential building.

According to a listing by Fulton Grace Realty, the bottom unit will be a duplex occupying the basement and first level. With four planned bedrooms and 2.5 baths, this duplex will have private access to the garage’s rooftop deck. Meanwhile, the second- and third-floor simplex residences will each house three bedrooms and two baths, and come with large front balconies as well as access to the main building’s rooftop deck.

Michael S. Cox is the listed architect of record. No elevations or renderings of the design have yet been posted, though the permit description does note a masonry design.

Nearby bus access consists of north and southbound service for Route 49, which is located at the corner of Western & Belden via a two-minute walk northwest. Additional nearby service is comprised of Routes X49 and 74 to the northwest and Routes 56 and 73 to the southwest. Those looking to board the CTA L will also find Blue Line trains available via a 10-minute walk south to Western station.

The development resides near both an array of park spaces like Holstein Park and the elevated 606 Park, as well as retail and dining offerings along N Western Avenue and N Milwaukee Avenue.

Bachula Development Inc is serving as general contractor for the $750,000 construction. As far as the timeline, Fulton Grace Realty has indicated a completion for the fall of this year.