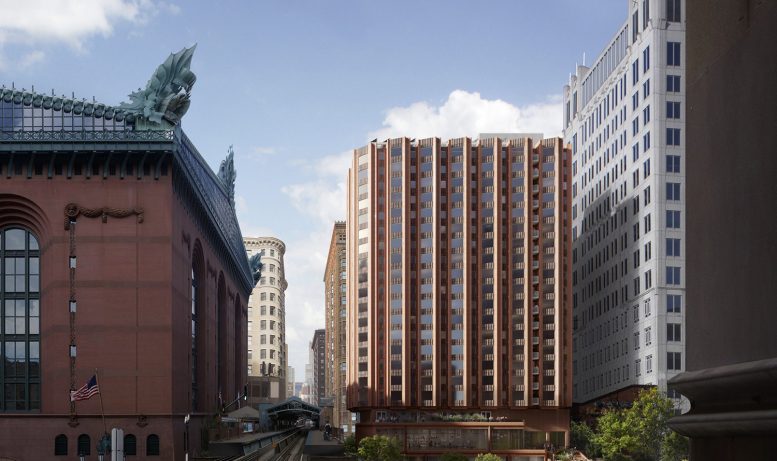 The City of Chicago has selected Assemble Chicago as the winner of the C40 Reinventing Cities competition, planned for a city-owned site in The Loop. Located at 331 S Plymouth Court, the project site consists of a city-owned parking garage and a series of smaller parcels on the western edge of Pritzker Park. Bound by S Plymouth Court and W Van Buren Street, the rectangular parcel also has an alley running through that will be vacated. 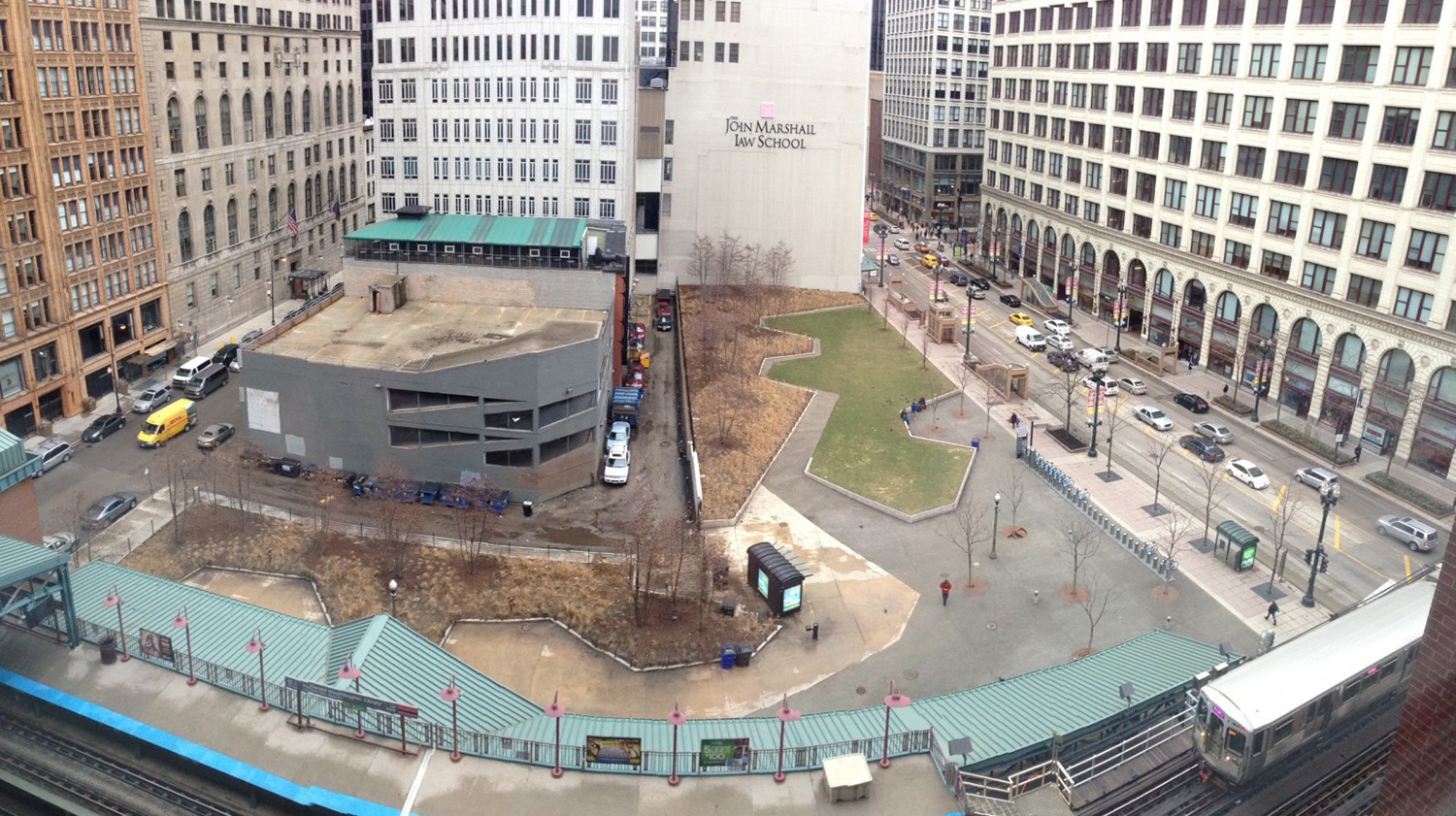 Announced by the City of Chicago and the Department of Planning and Development (DPD), the proposal was chosen as a finalist in April after being submitted as a response to a Request for Proposals (RFP) issued by DPD in 2020. 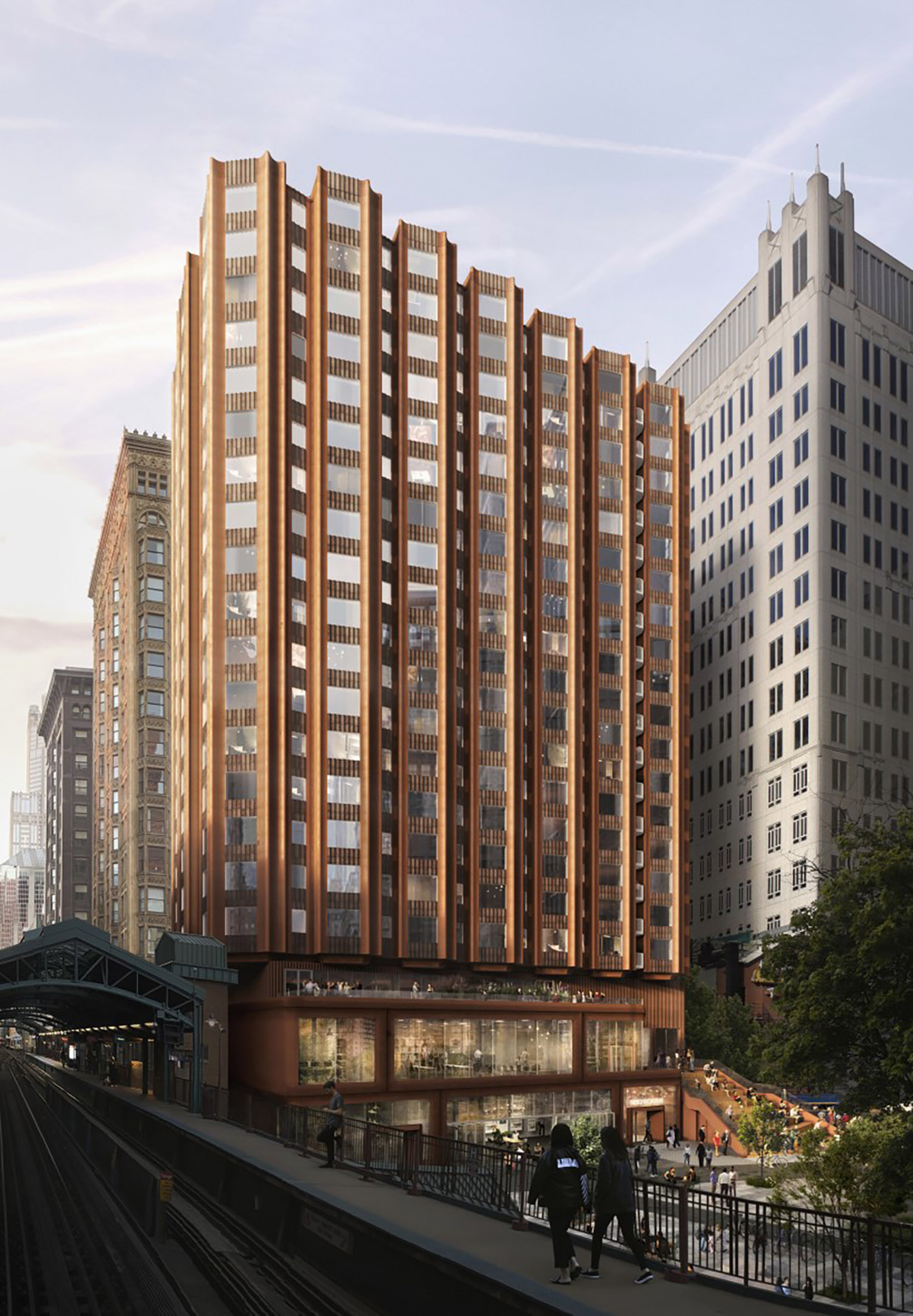 Dubbed Assemble Chicago, the proposal is being led by The Community Builders and Studio Gang. The winning submission will encompass a net-zero carbon, 20-story mixed-use structure to replace a vacant parking garage and four city-owned parcels. Housing residential and commercial space, it will provide 207 residential units priced for incomes ranging from 30 to 80 percent of the Area Median Income. A two-level podium will hold a food hall for small, minority-owned restaurants, nonprofit office and meeting space, a produce grocer, and a medical clinic. Zero parking spaces will be included in the plan. 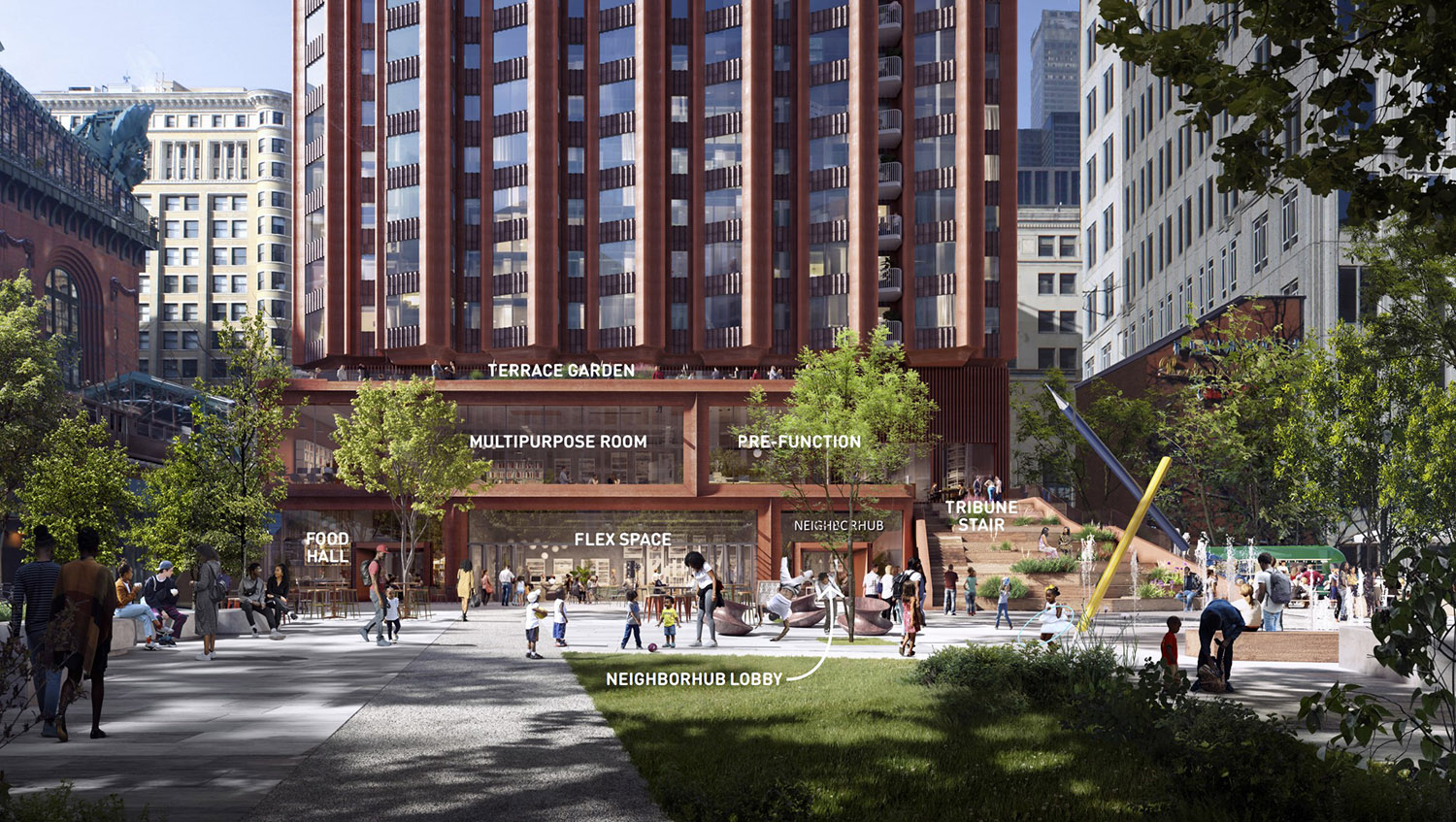 Uniting a dynamic public program with integrated, sustainable systems and efficient materials, the proposition will meet the competition’s 10 Challenges for Climate with a site-specific design that provides a new model to simultaneously address the urgent issues of climate change and inequality in cities. The building will utilize solar panels, a rooftop water tank, heat recovery, no fossil fuels for appliances, efficient structure and facade design, a rooftop garden, and a backup generator. 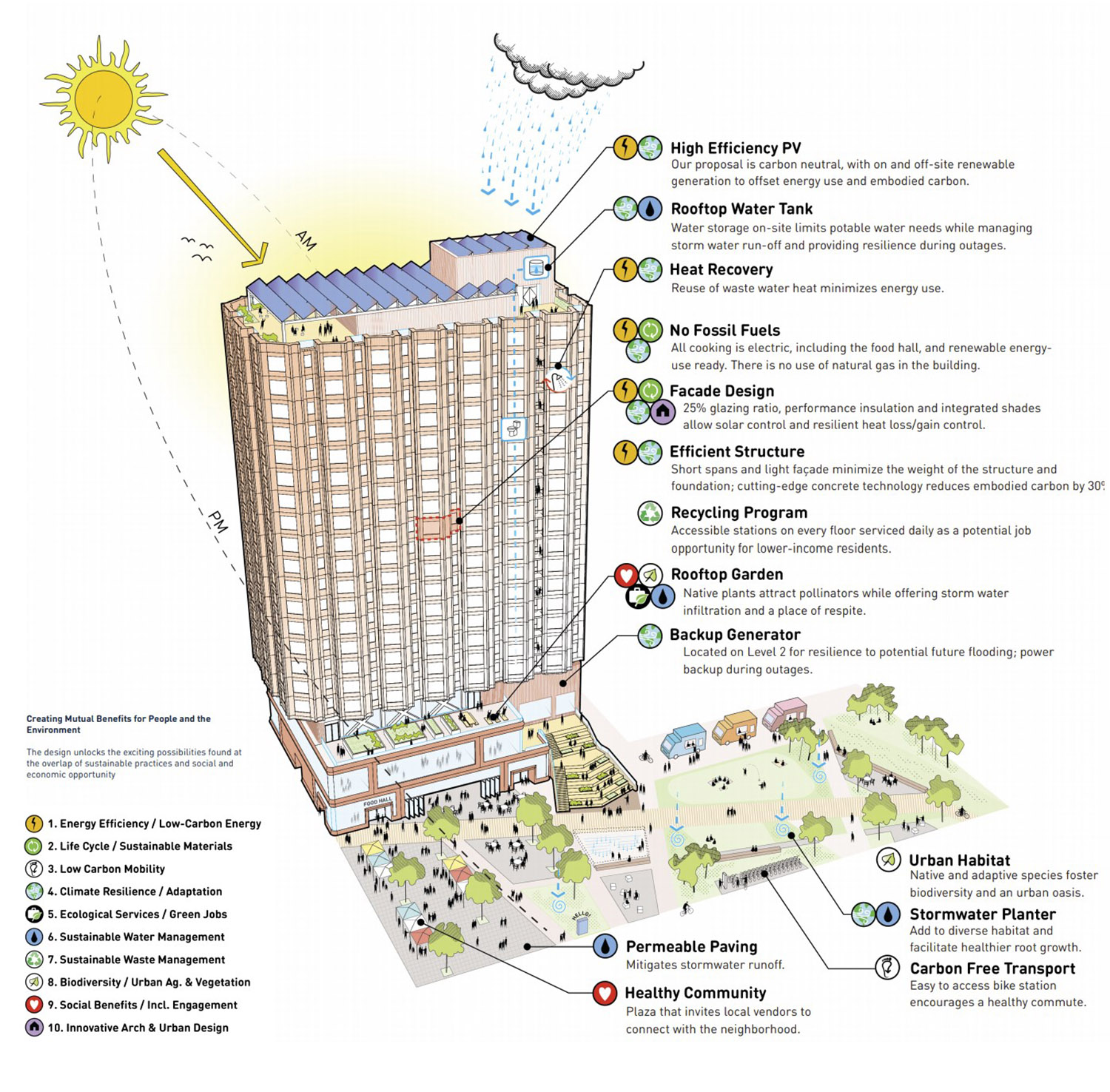 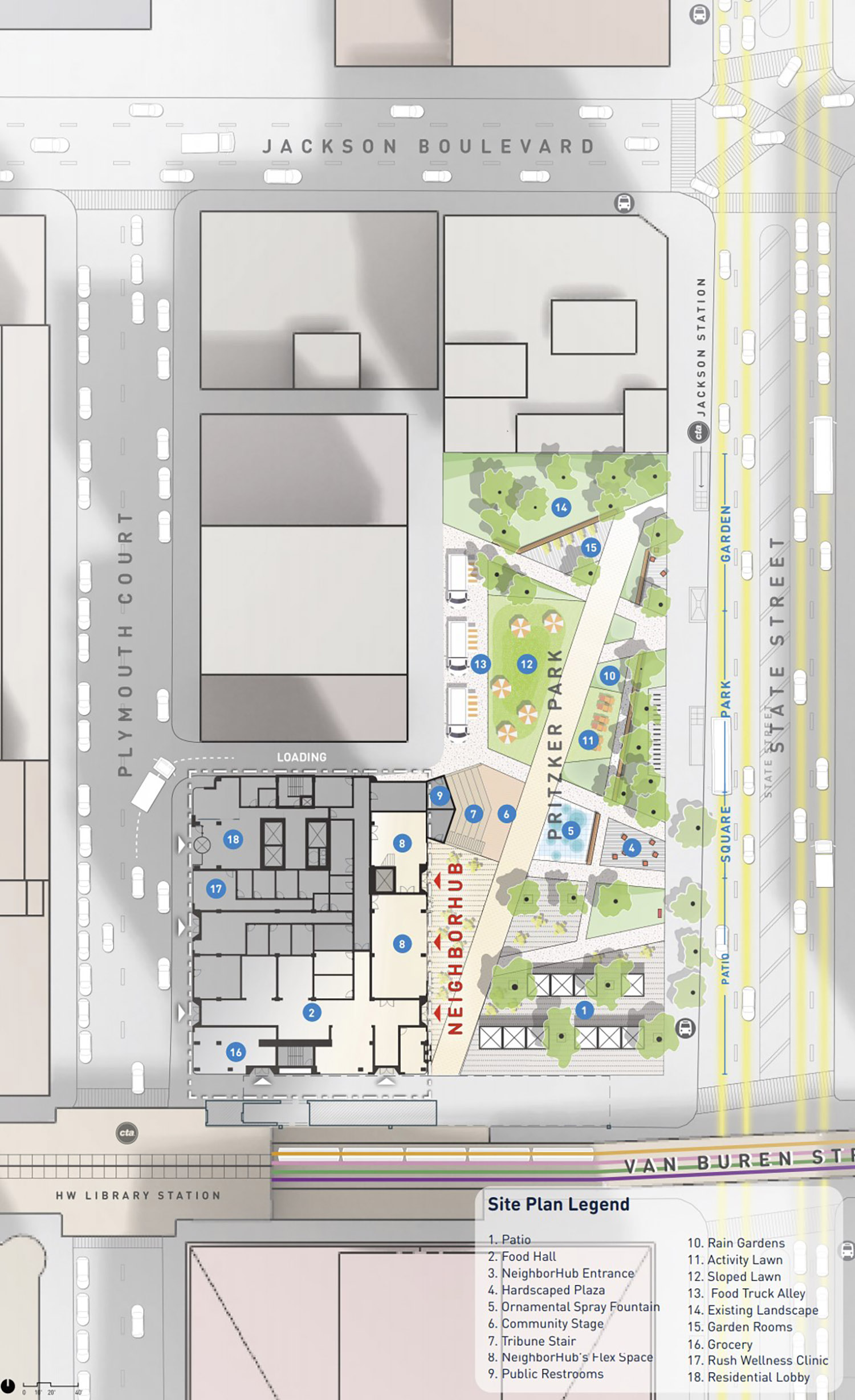 The “Assemble Chicago” project was selected over three other net-zero, mixed-use proposals due to its superior design, commitment to affordability, family-sized units, development team experience, proposed purchase price, and community feedback, among other factors.

The development is subject to multiple review and approval processes involving financing, site acquisition, and zoning, which are expected to begin by the end of 2021. A completion timeline has not been announced.