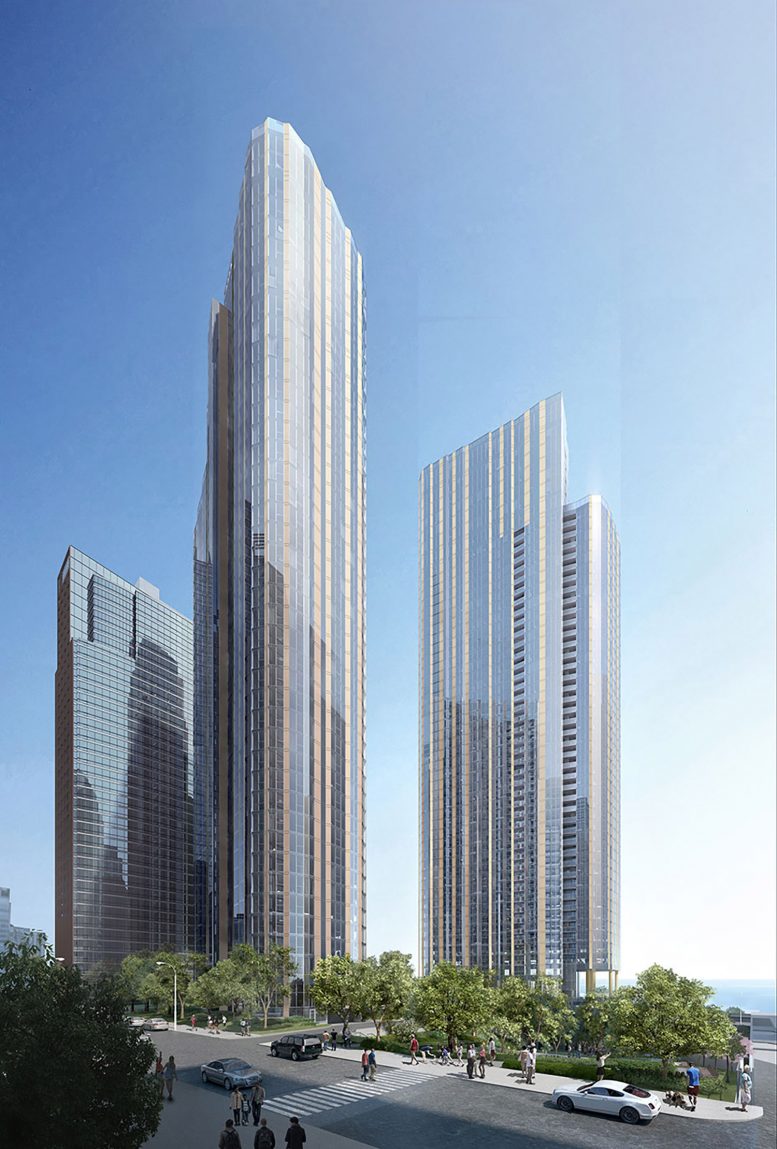 Construction has topped off on Cirrus and Cascade, a pair of residential towers located in Lakeshore East. Officially addressed at 211 N Harbor Drive and 455 E Waterside Drive, respectively, Cirrus and Cascade are part of the larger Lakeshore East development within the Parcels IJKL. The site sits between N Harbor Drive and Lake Shore Drive, just south of the multi-level Wacker Drive. The towers are being developed by Lendlease and Magellan Development Group, with bKL Architecture in charge of the design. 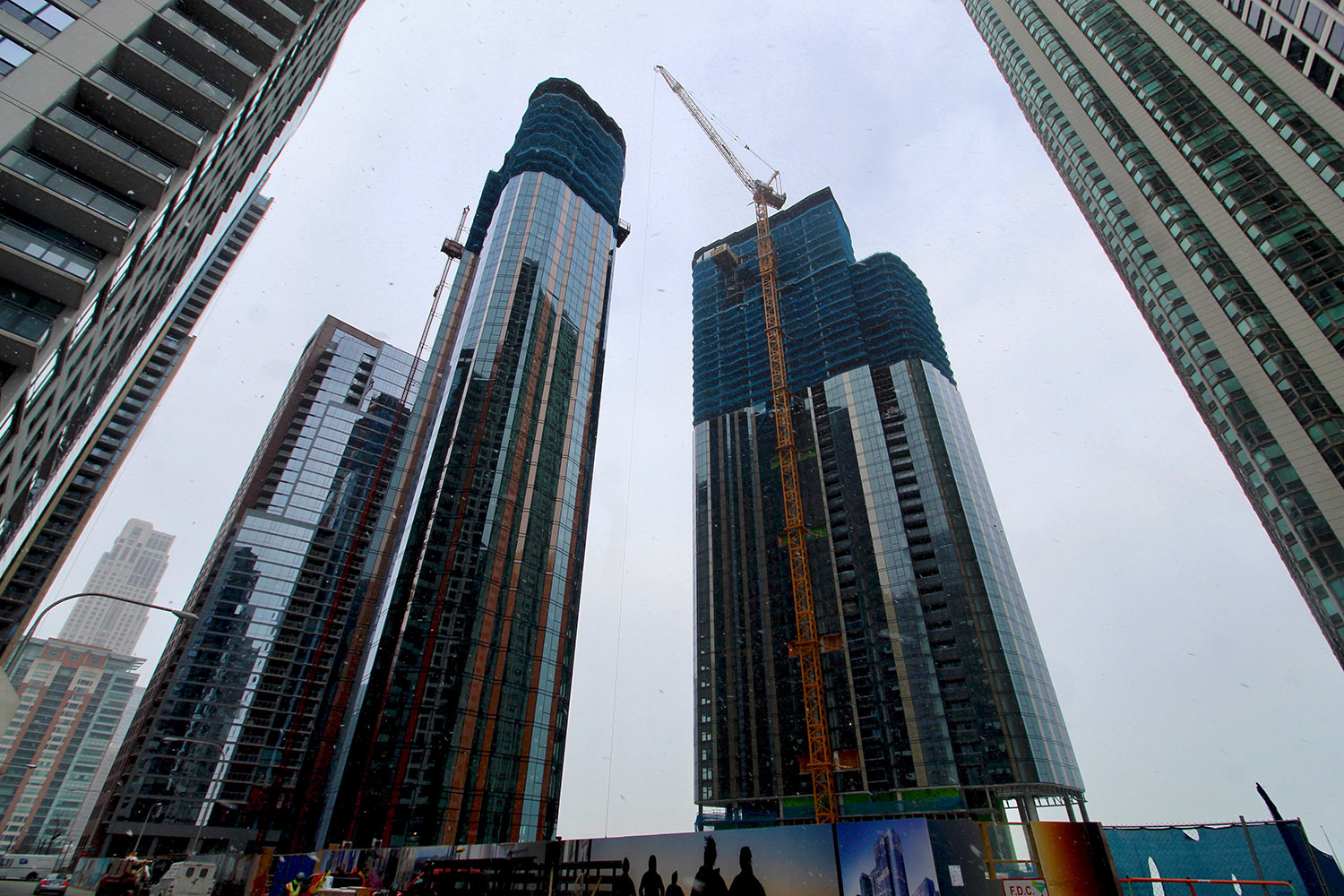 Cirrus, the taller of the two buildings, rises 47 stories over 562 feet. It will hold 350 condominium units. The residences are poised to have optimal access to light, as well as views to the lake, river, and newly implemented Cascade Park. With the site’s proximity to the lakefront and new park, the tower’s design responds to the natural elements of the site’s context through its texture, form, and continuous glass façade. Complementary in materiality to neighboring buildings in the master plan, Cirrus is individualized by golden brass metal expressed panels. 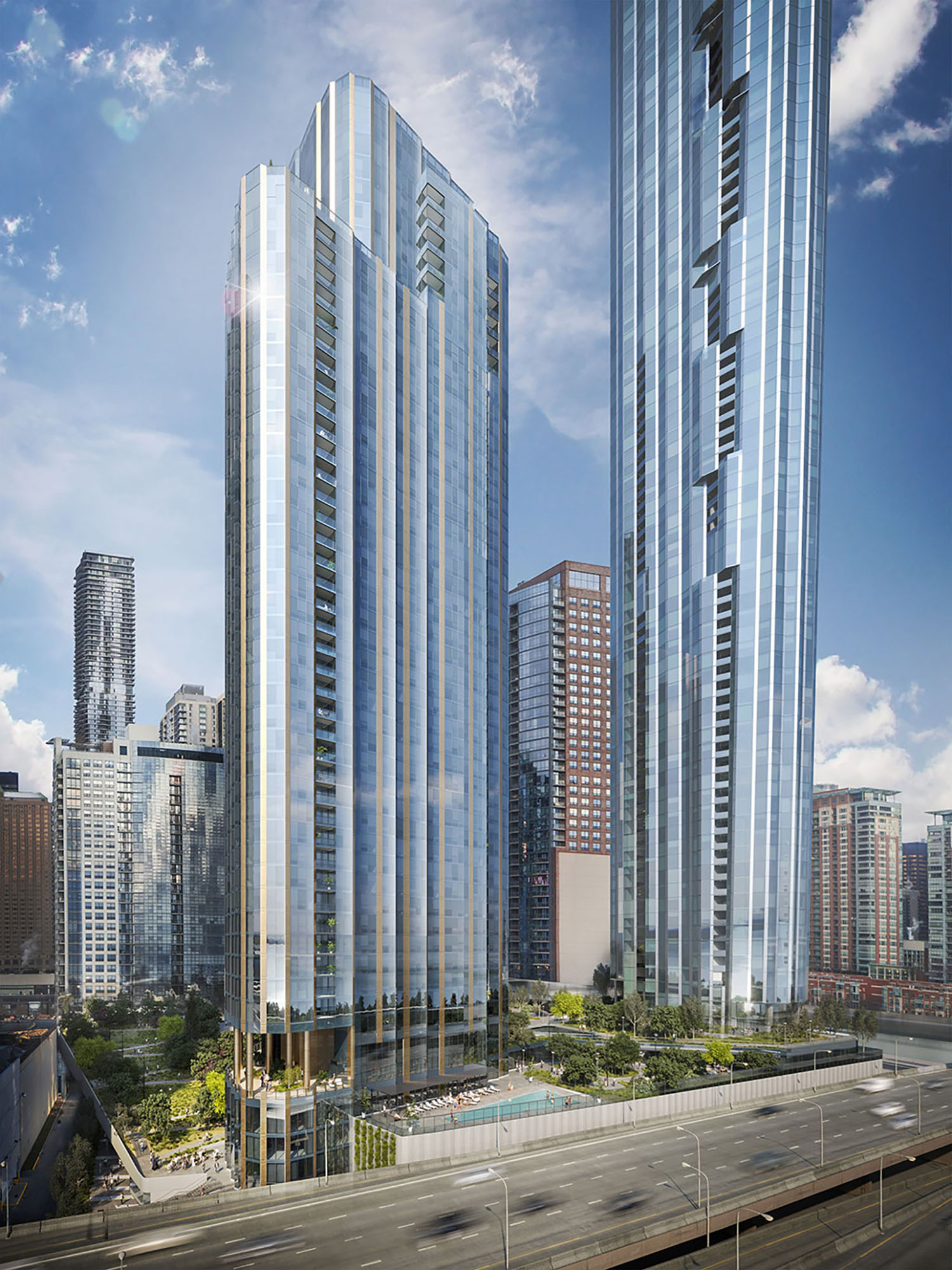 The second tower, Cascade, will rise 37 stories over 396 feet. The multifamily tower will hold 503 units and be positioned to provide optimal access to light and views to the lake, river, and newly implemented Cascade Park. Similarly to Cirrus, Cascade’s design responds to the natural elements of the site’s context, which is expressed in a fluid massing and the reflection of a continuous glass façade. The project separates itself from the rest of the master plan via its copper metal expression panels on the exterior of the building. 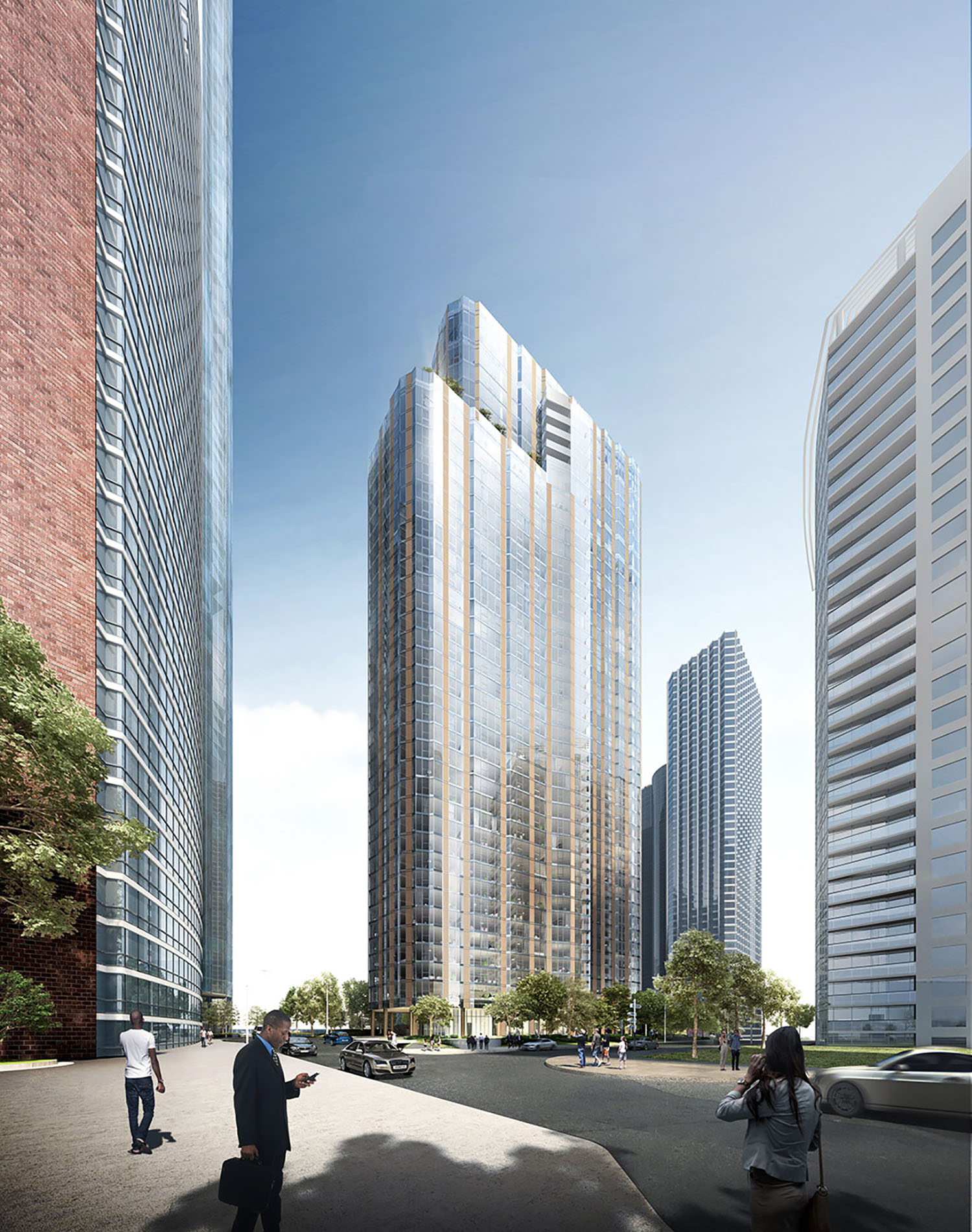 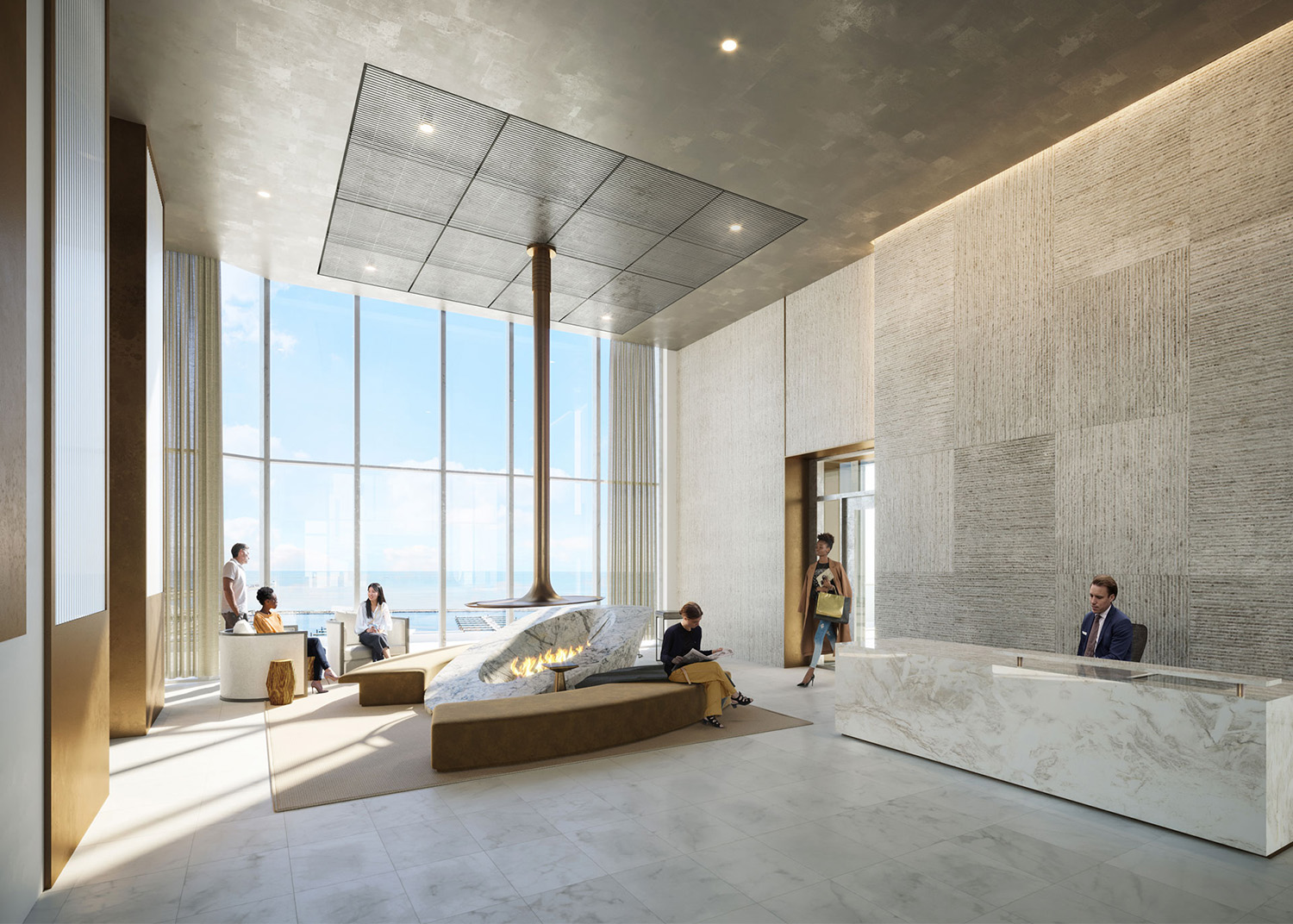 Cascade features an interior design, where both the layout and amenities are framed around community. The tower’s pool deck rises six feet above the park level, offering views of the skyline and new park, ideal for shared experience among residents and their guests. The project also features multiple communal lounges throughout and shared fire pits on the roof deck, all designed with interaction as the core inspiration. 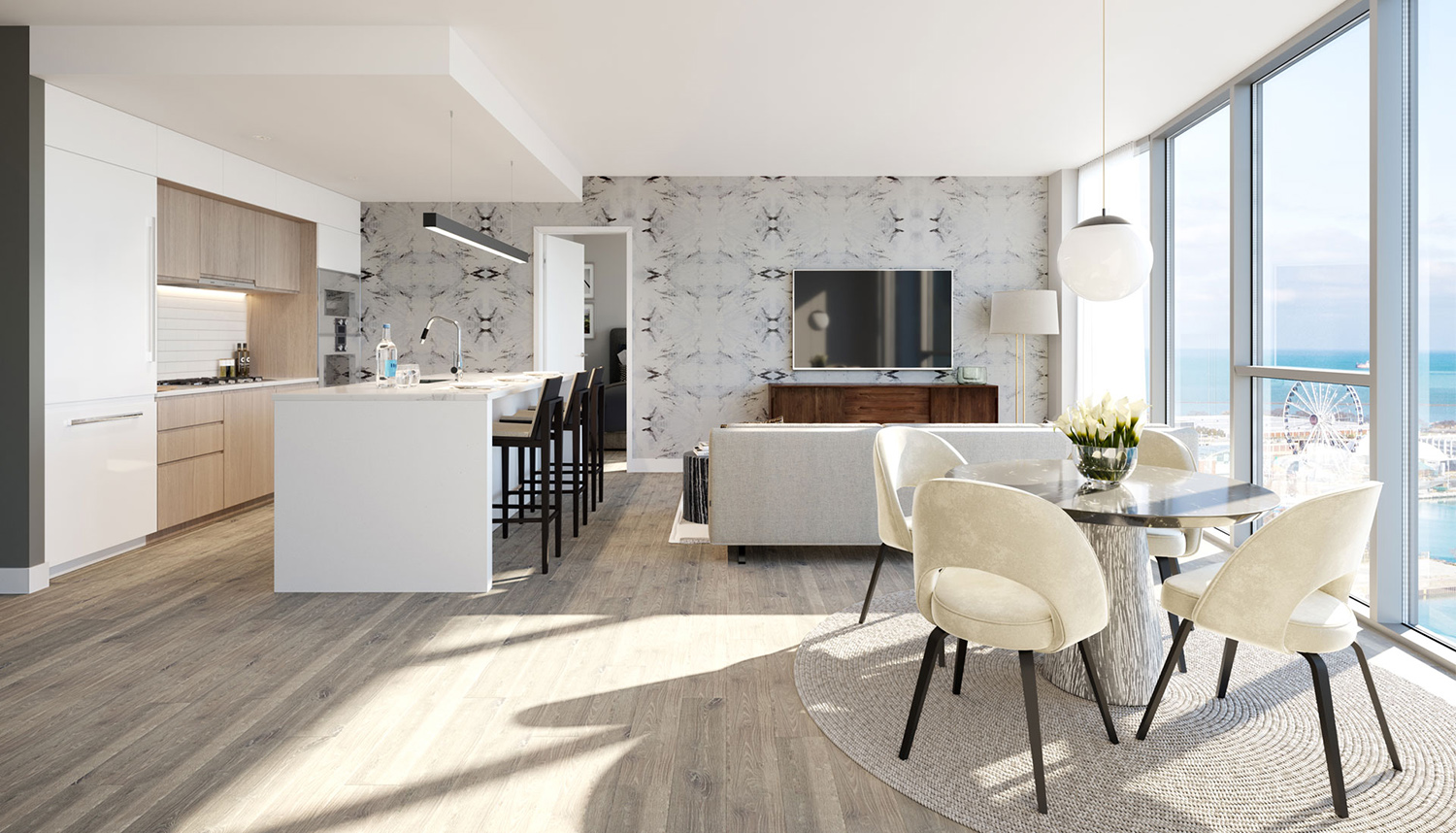 Priced from the mid-$400,000s to over $4 million, Cirrus condominiums include one-, two-, three-, and four-bedroom floor plans ranging in size from 650 to over 3,000 square feet. A total of 15 penthouse residences, including one duplex, are located on floors 42 through 47, while two townhome residences are located at ground level. All homes at Cirrus feature designer finishes and access to 48,000 square feet of exclusive amenities, including a suite on the 41st floor for indoor and outdoor dining and entertaining. 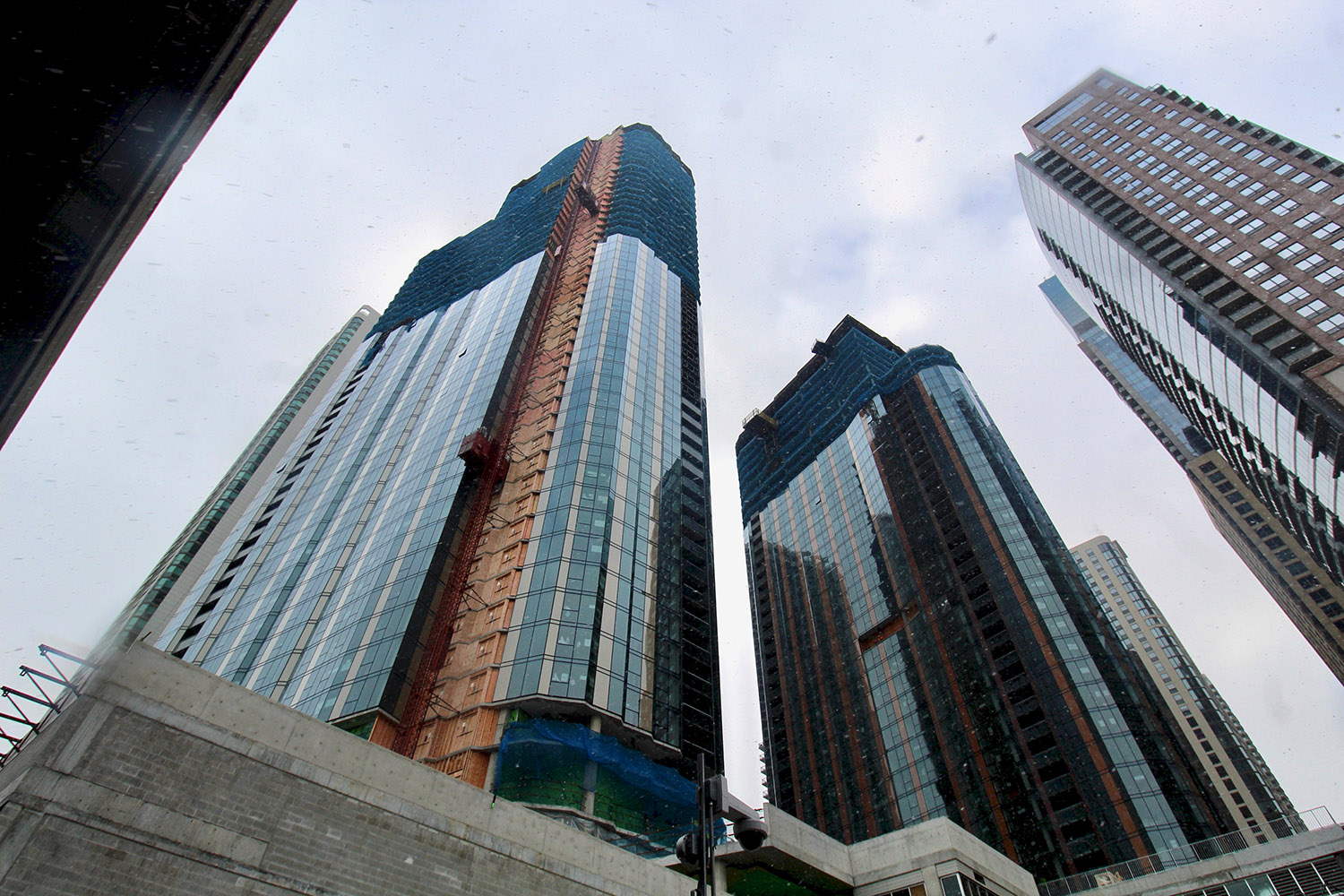 Cascade apartments will feature studios and one-, two, and three-bedroom floor plans. Featuring nine-foot-tall ceilings, European cabinets, six-inch-wide plank flooring, and an expansive suite of amenities housed on the first and 32nd floors of the tower. 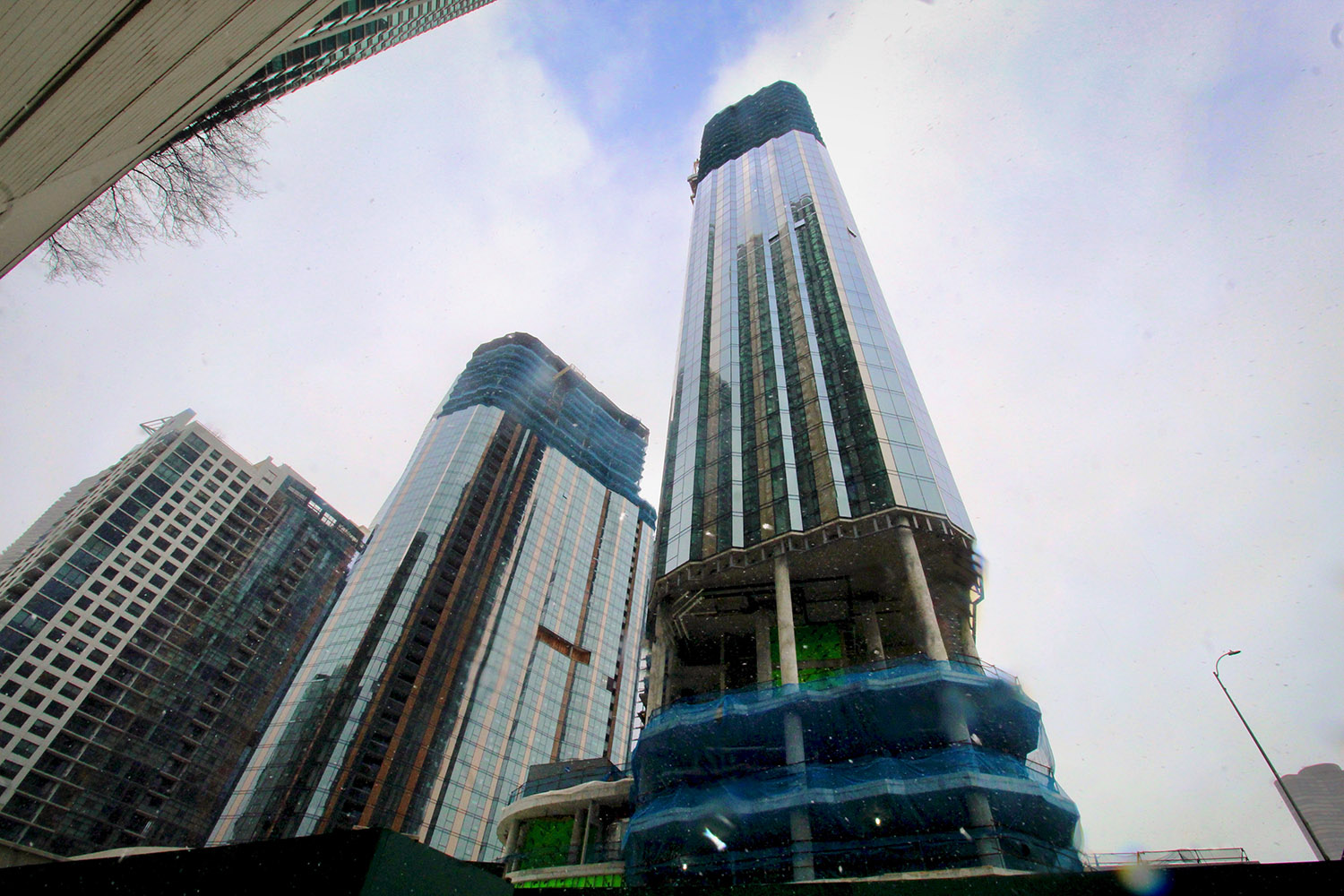 Residents of Cirrus and Cascade will also share access to amenities housed in a podium connecting the two buildings overlooking adjacent Cascade Park. These include an indoor lap pool, heat therapy pool, and splash pad. There will also be a children’s playroom, fitness center with adjacent yoga/spin studio, training area and locker rooms, and massage and steam rooms. Included in the amenity space will also be a game room with golf simulator and billiards, a screening room, a shop space, a music room, a multi-purpose community room, a dog-washing station, and indoor and outdoor dog runs. The podium also includes below-grade parking spaces for the development. 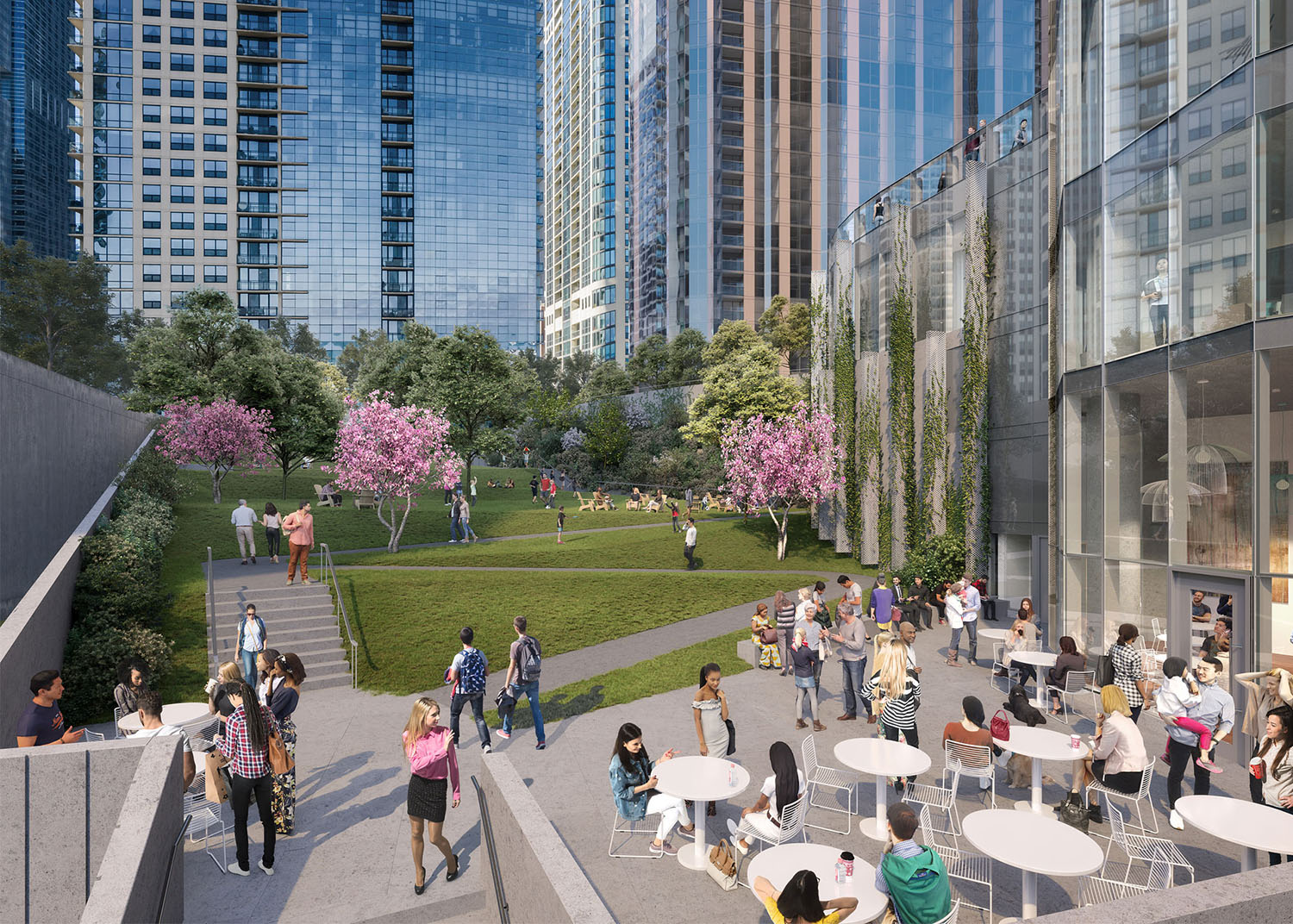 Cascade Park, the 0.8-acre green space designed by Claude Cormier + Associés, will feature lush landscaping, passive wellness features, meandering pathways, outdoor living rooms for recreational use, terrace seating, and a dog run. Although privately developed and maintained, Cascade Park will serve neighbors in the surrounding community, establishing an activated connection to the lakefront and Chicago Riverwalk in two ways. It features a terraced landscape design that slopes from N Harbor Drive to Lower Lake Shore Drive, and a new bike and walking path that connects Lakeshore East Park in the heart of the neighborhood to the Lakefront Trail. 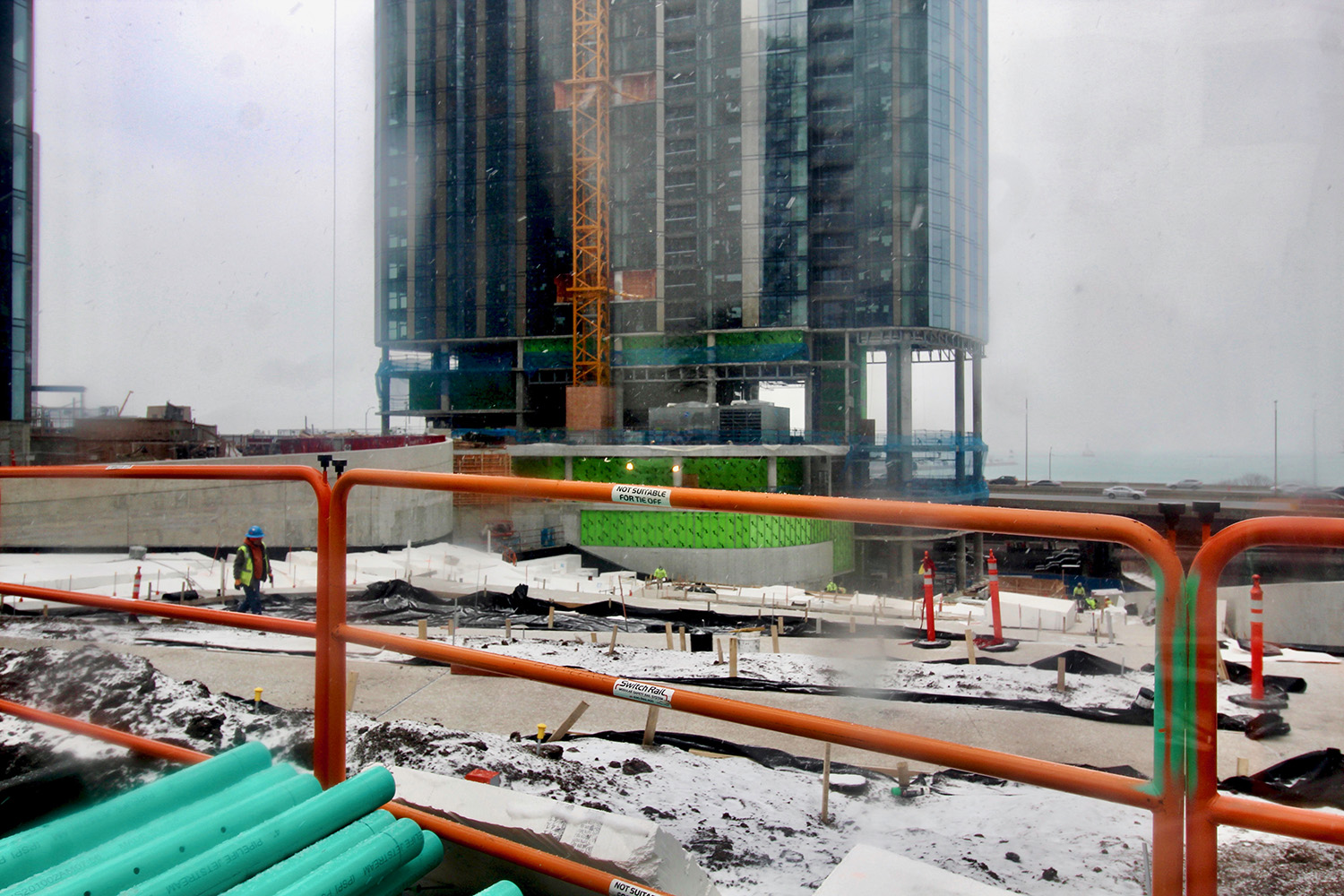 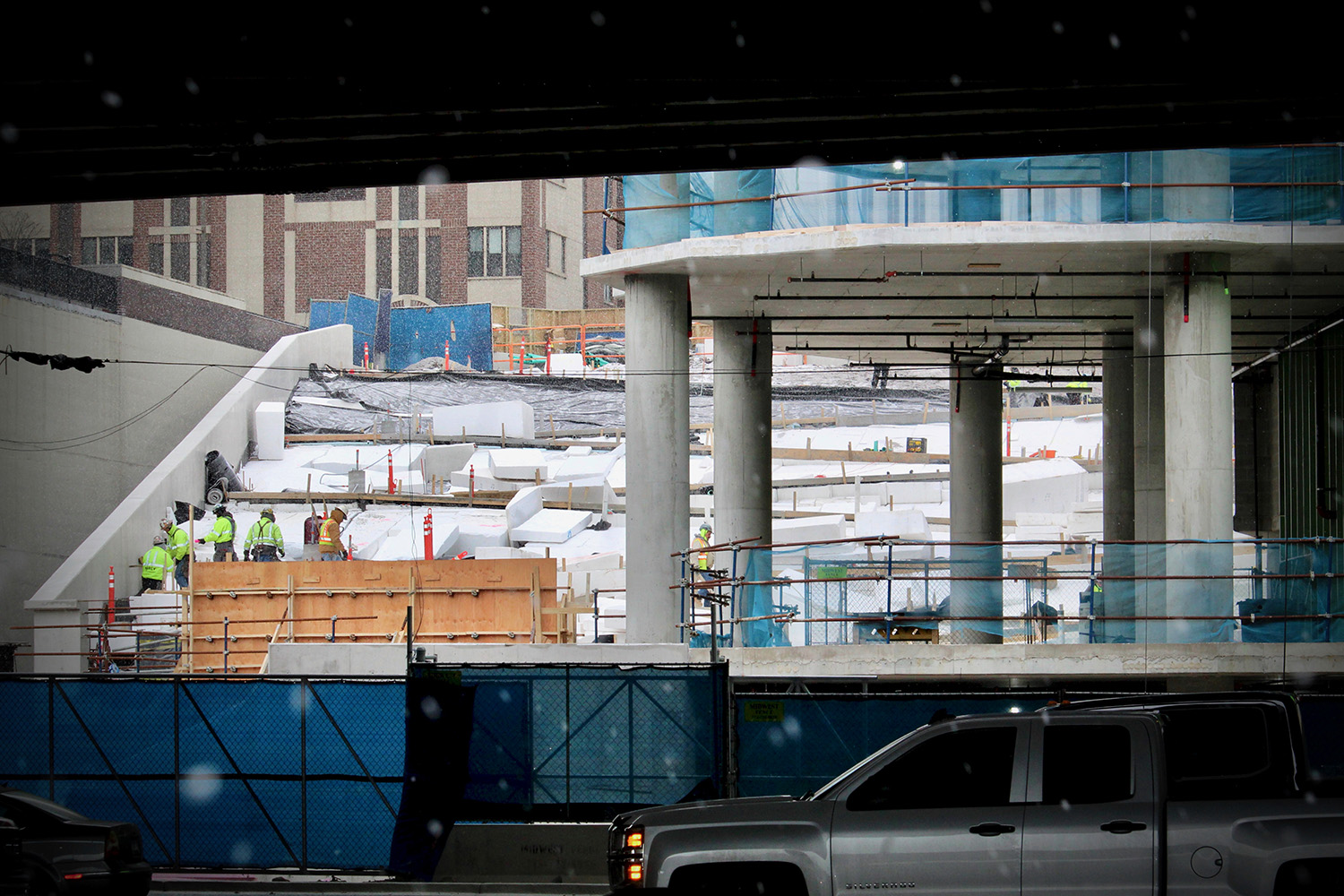 Both towers are expected to be completed in 2021. The first residences at Cirrus will be delivered in fall 2021. For Cascade, pre-leasing of the apartments will begin in spring 2021, with the first move-ins expected in summer 2021. The developers also announced that adjacent Cascade Park will open ahead of schedule in summer 2021.