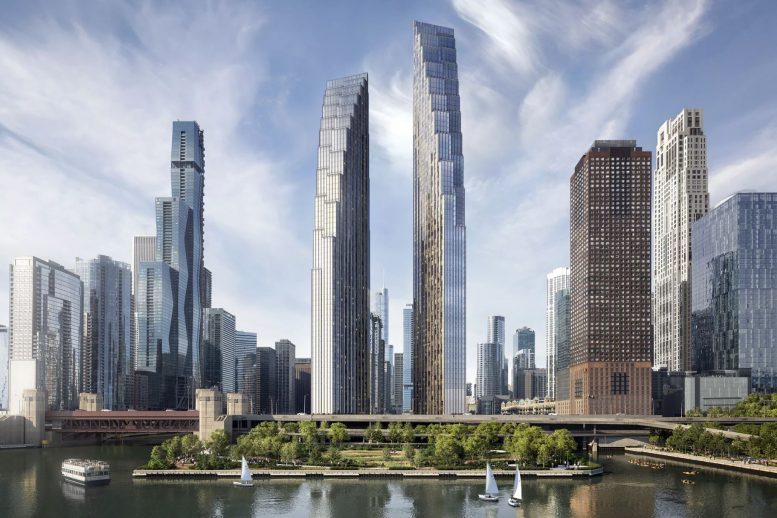 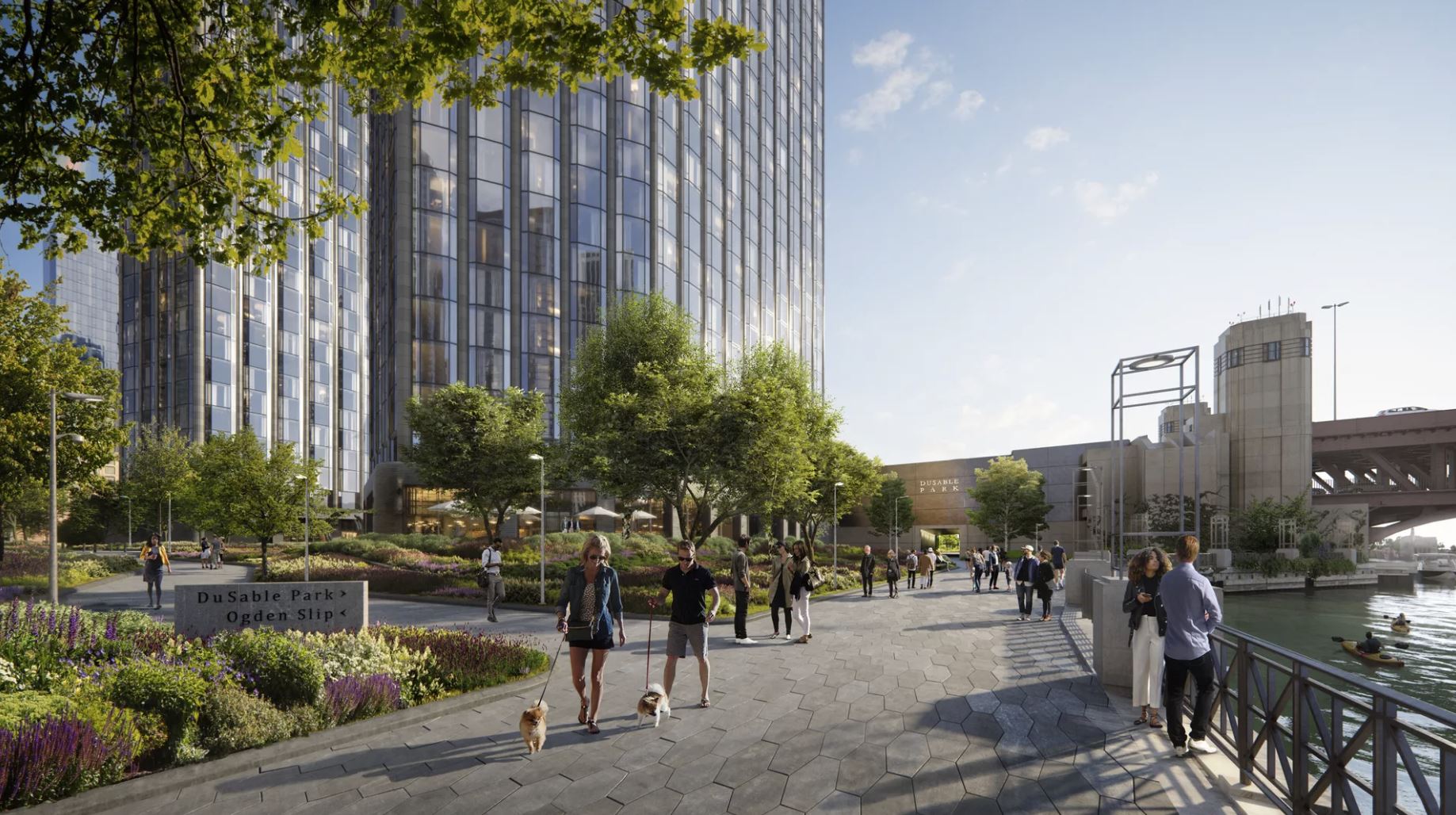 Designed by Skidmore Owings & Merrill, the updated proposal includes two towers, at the heights of 875 feet and 765 feet, with the taller tower slated as the northern tower. The revised plans look to split 1,100 residential units between the two buildings, with the previously proposed hotel and condominiums removed. Additionally, the parking will be reduced to 300 spaces and will be located underground. The towers were originally going to be rooted in a four-story podium building, but that was eliminated as part of the revisions due to concerns over sightlines to the river. 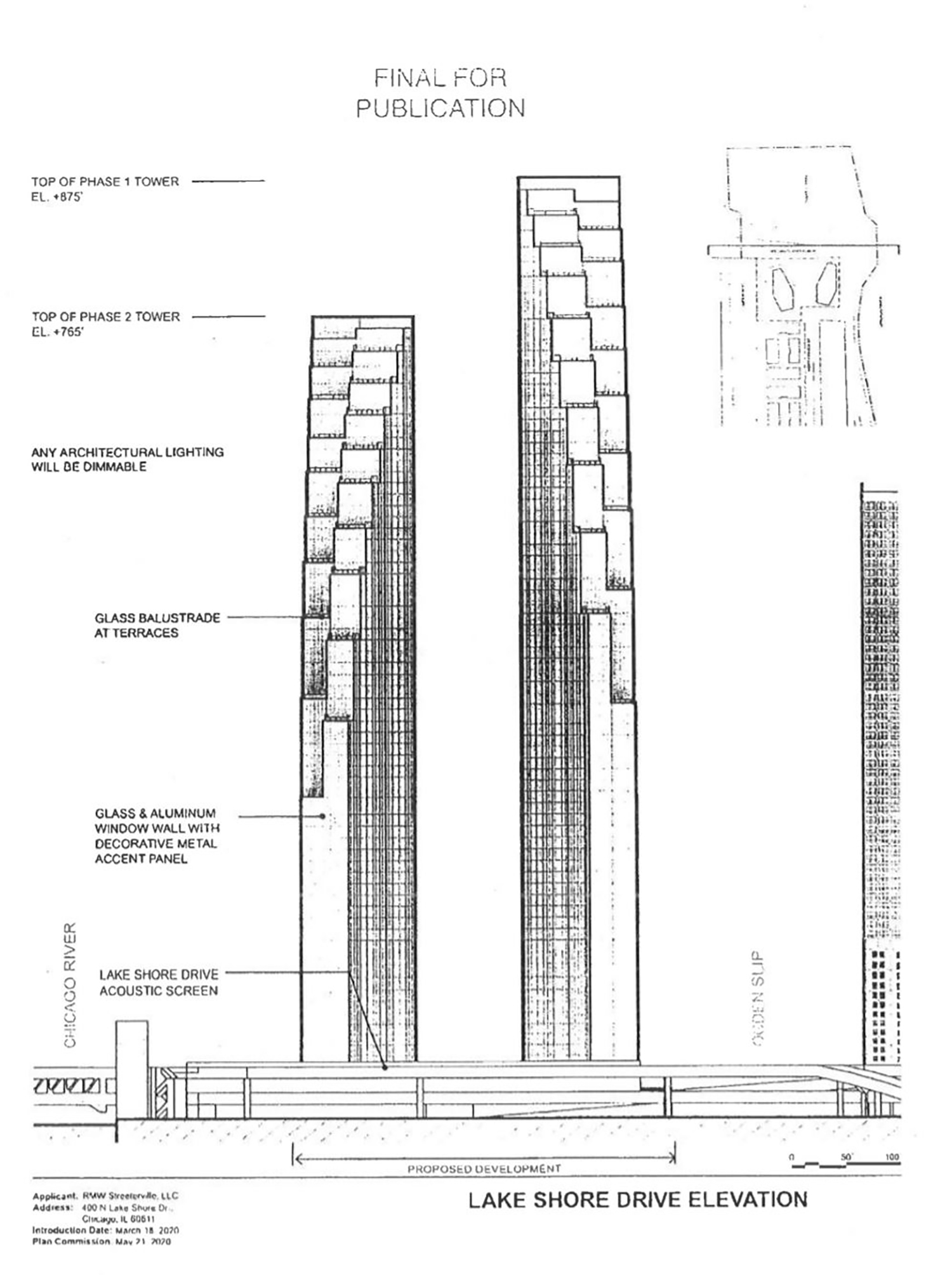 Drawings submitted as part of the most recent zoning proposal show the latest design details of the project. The façade will be a glass and aluminum window wall with decorative metal accent panels. As the tower rises, setbacks will be included featuring terraces for residential units. There will also be an acoustical screen at the base along N Lake Shore Drive. 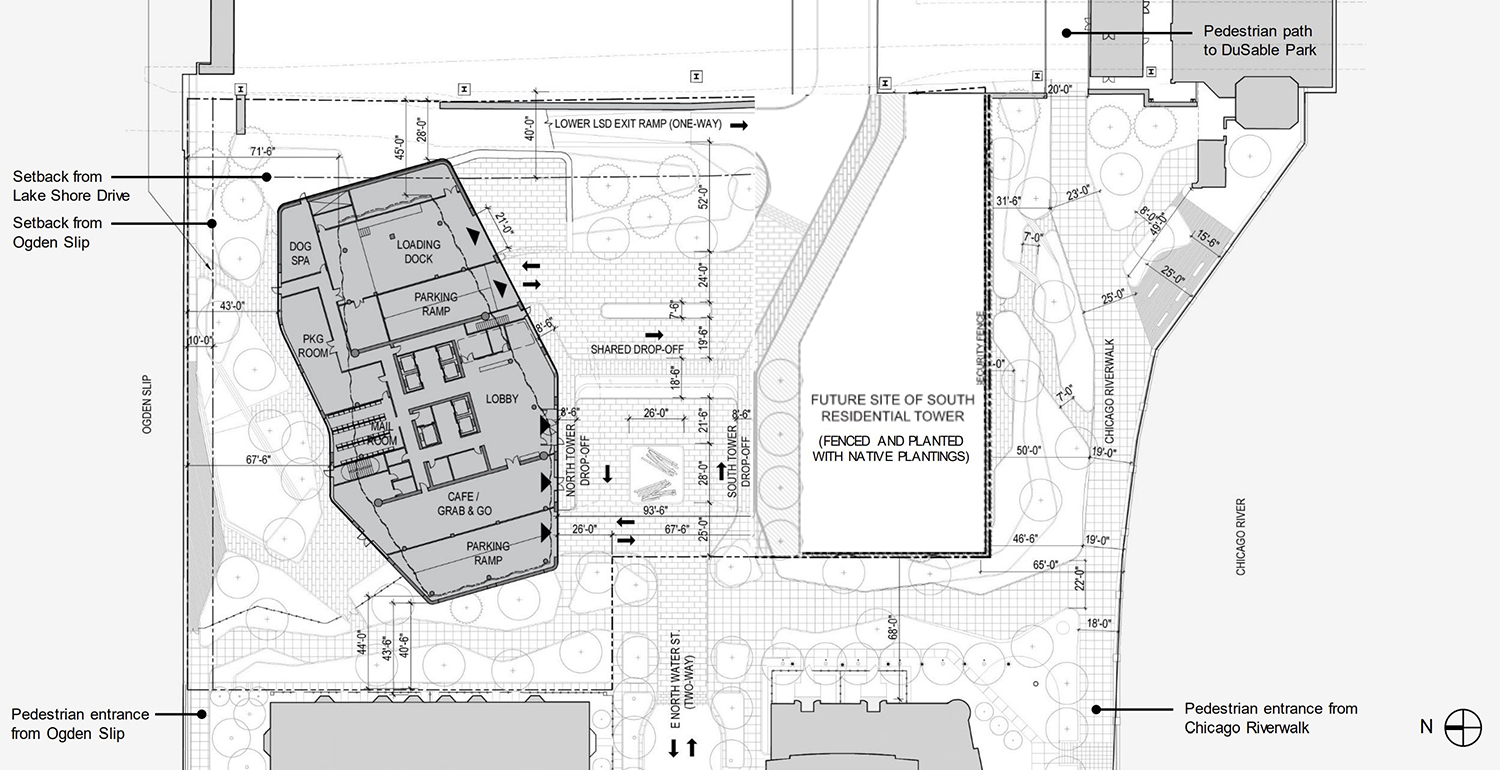 Related Midwest will, per the agreement, commit $10 million to the development of DuSable Park, a plot of land across from the site on the east side of Lake Shore Drive. They have also agreed to a list of infrastructure and design improvements at their cost. These include six new security cameras, 38 light fixtures along the Riverwalk and landscaped areas, and improved pedestrian crossings at the intersection of Columbus Drive and Upper North Water Street, the intersection of Peshtigo Court and Illinois Street, and at the southbound Lake Shore Drive off-ramp at Illinois Street. The site also will include Divvy bike rental stations. 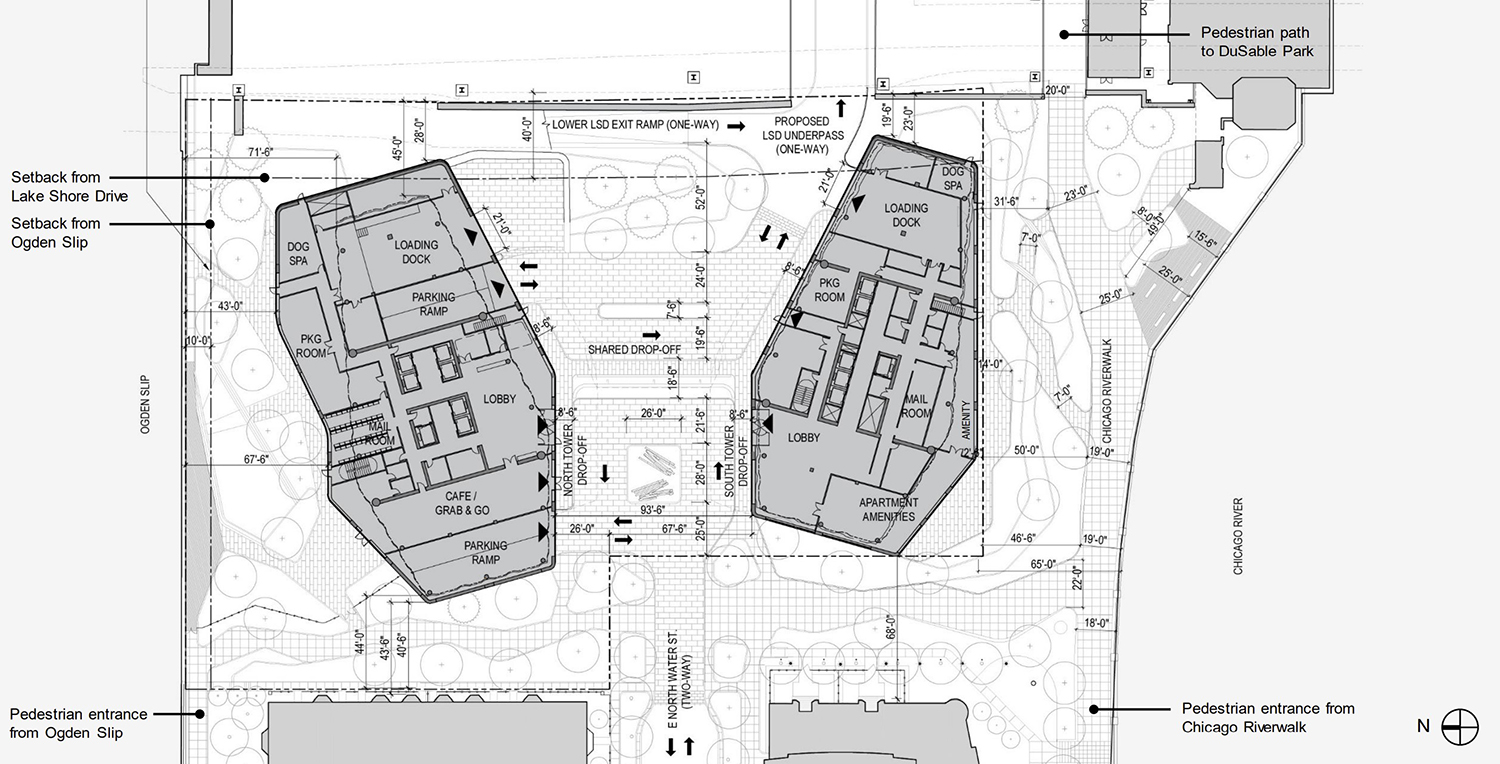 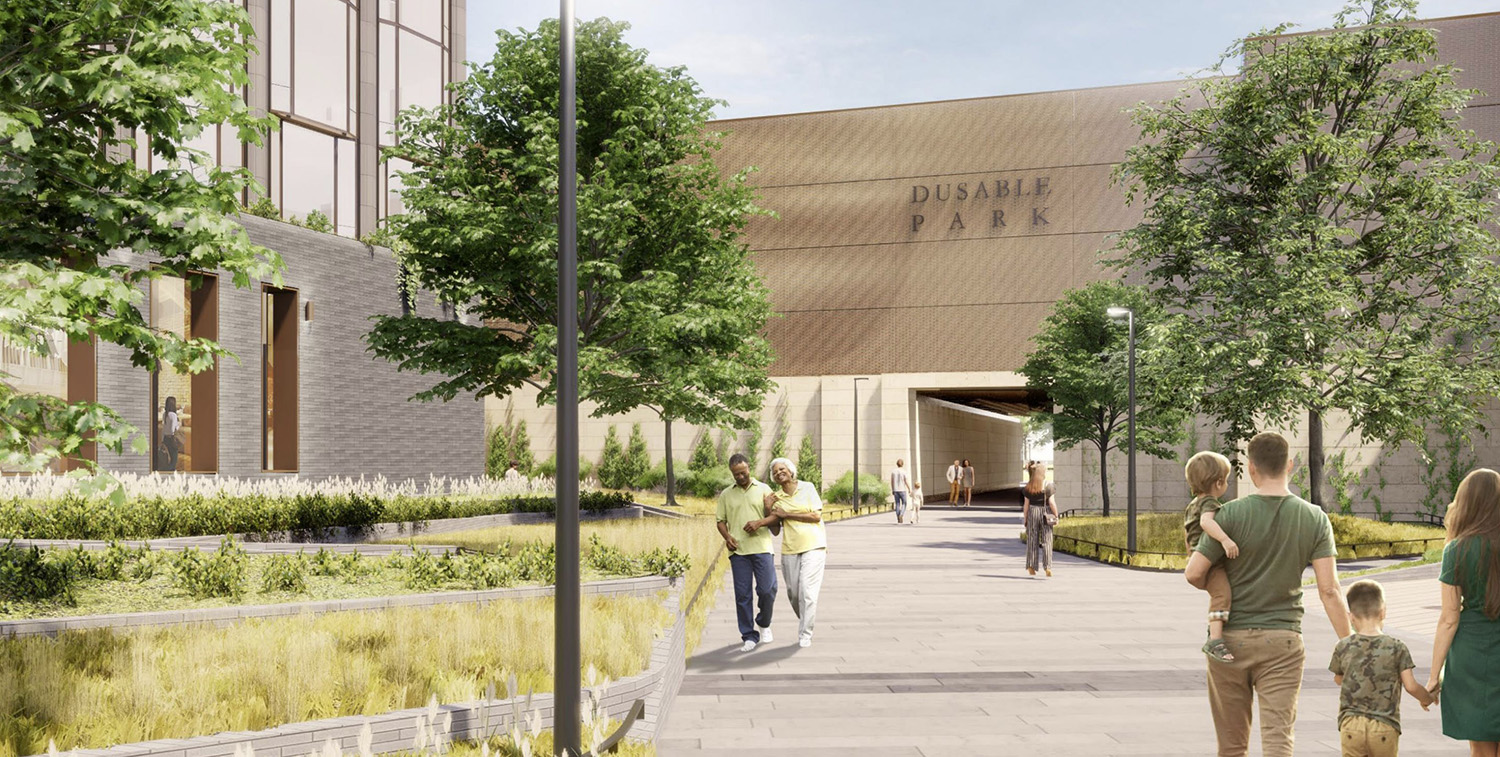 Previous reports state that construction is slated to break ground in 2021 with an expected completion in 2023. It is unclear whether this timeline is still accurate, considering the phased approach of construction, but the recent city approval may allow the project to move forward as previously reported. No permits have been filed or issued for the development.