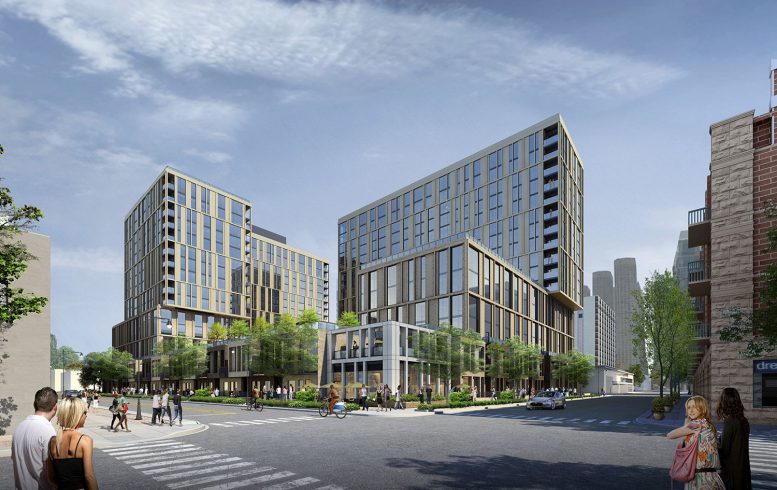 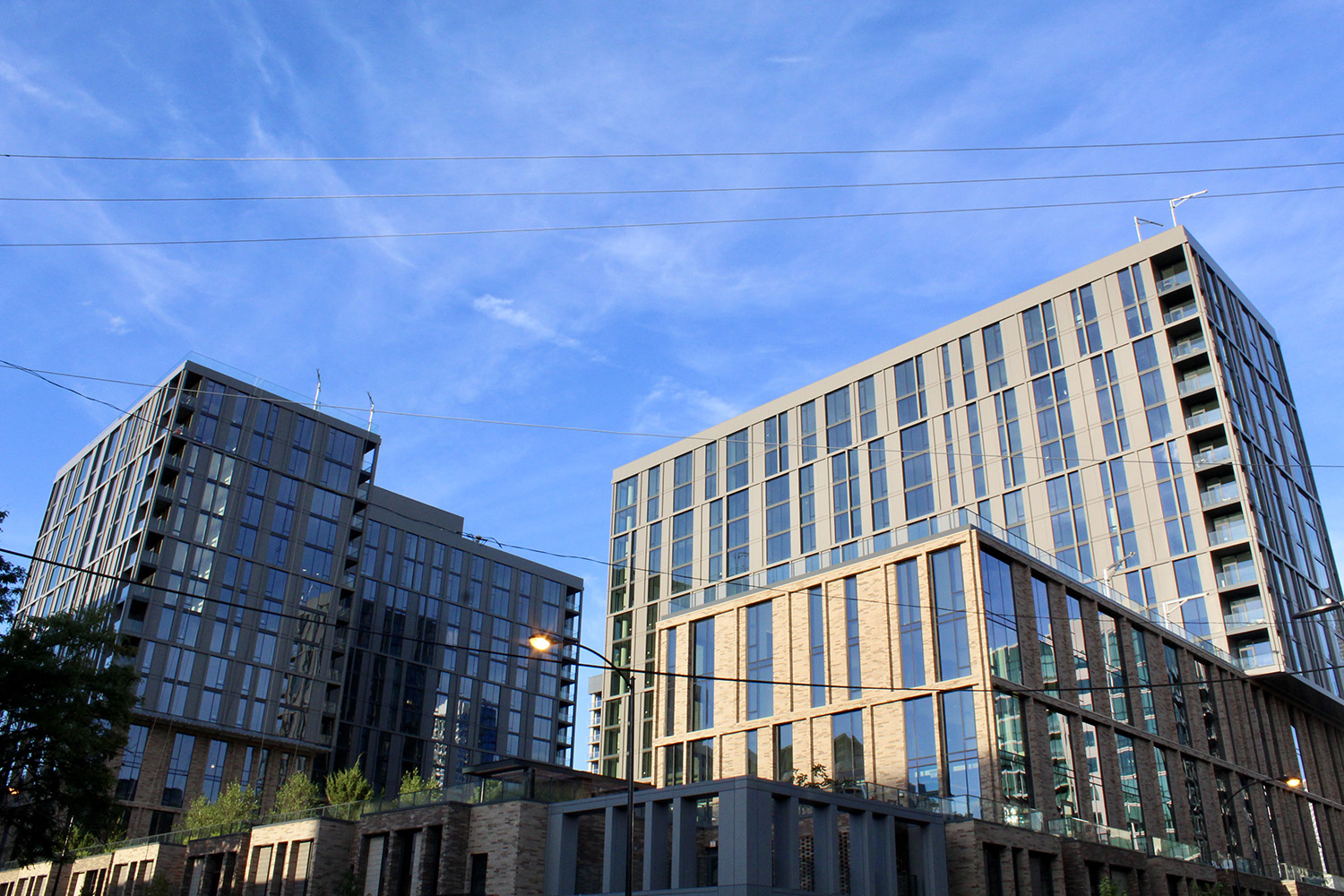 Recent photos show the finished look of the façade with the glass, brick, and metal panels fully installed. The project is set to reach completion anytime now, with a public completion date of summer 2020. Photos show the different façade treatments, with brick mostly covering the townhomes and podium of the development, and the metal panels featured on the two-tower portion. 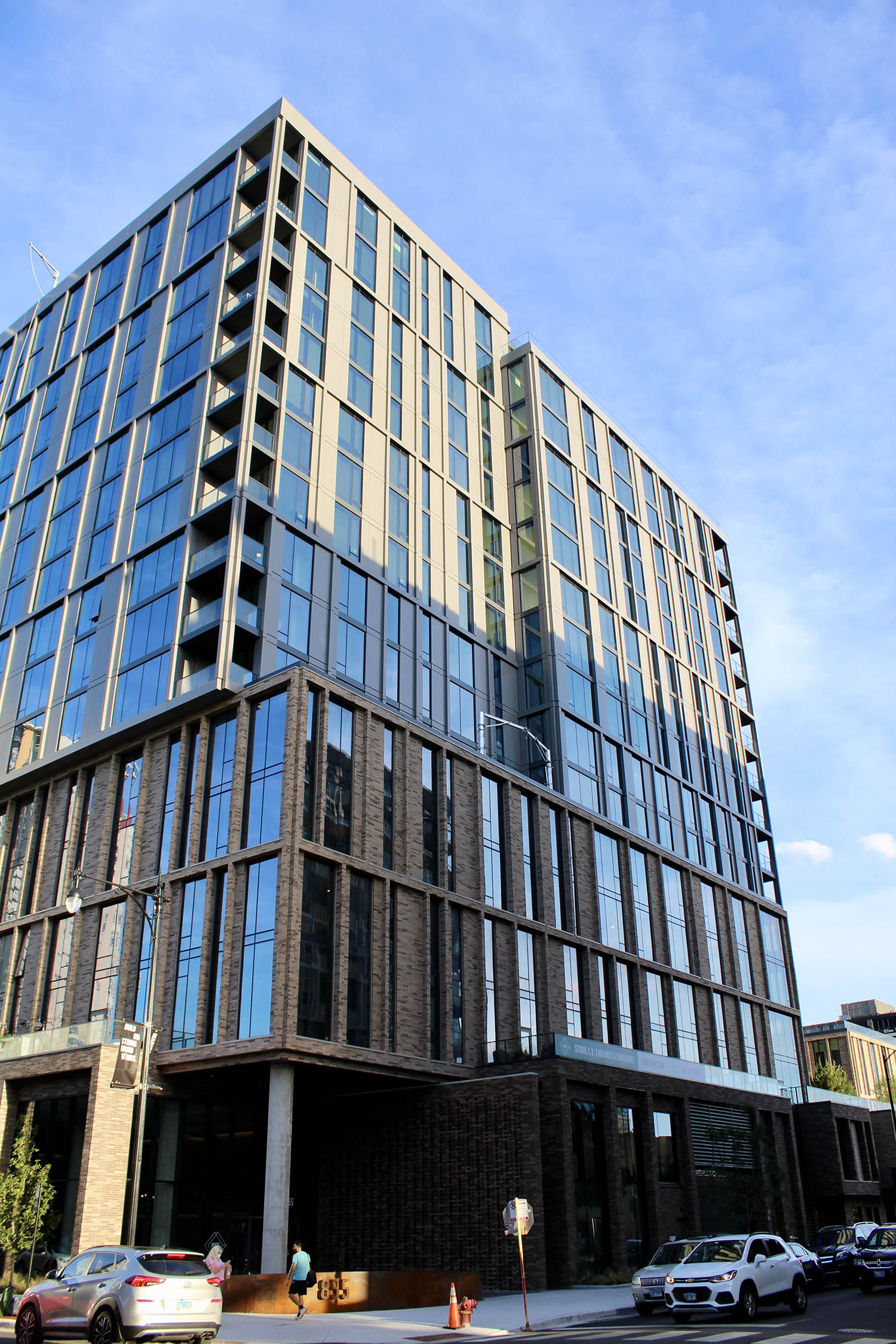 Porte Chicago is a 720,000-square-foot development comprised of two towers, one at 15 stories and the other at 17 stories, with duplex townhome apartments at street level. The North Tower will hold 319 units, the South Tower will hold 254 units, and there will be 13 rental townhomes, totaling 586 rental units. Townhomes will have private entrances along S Peoria and S Monroe Streets. 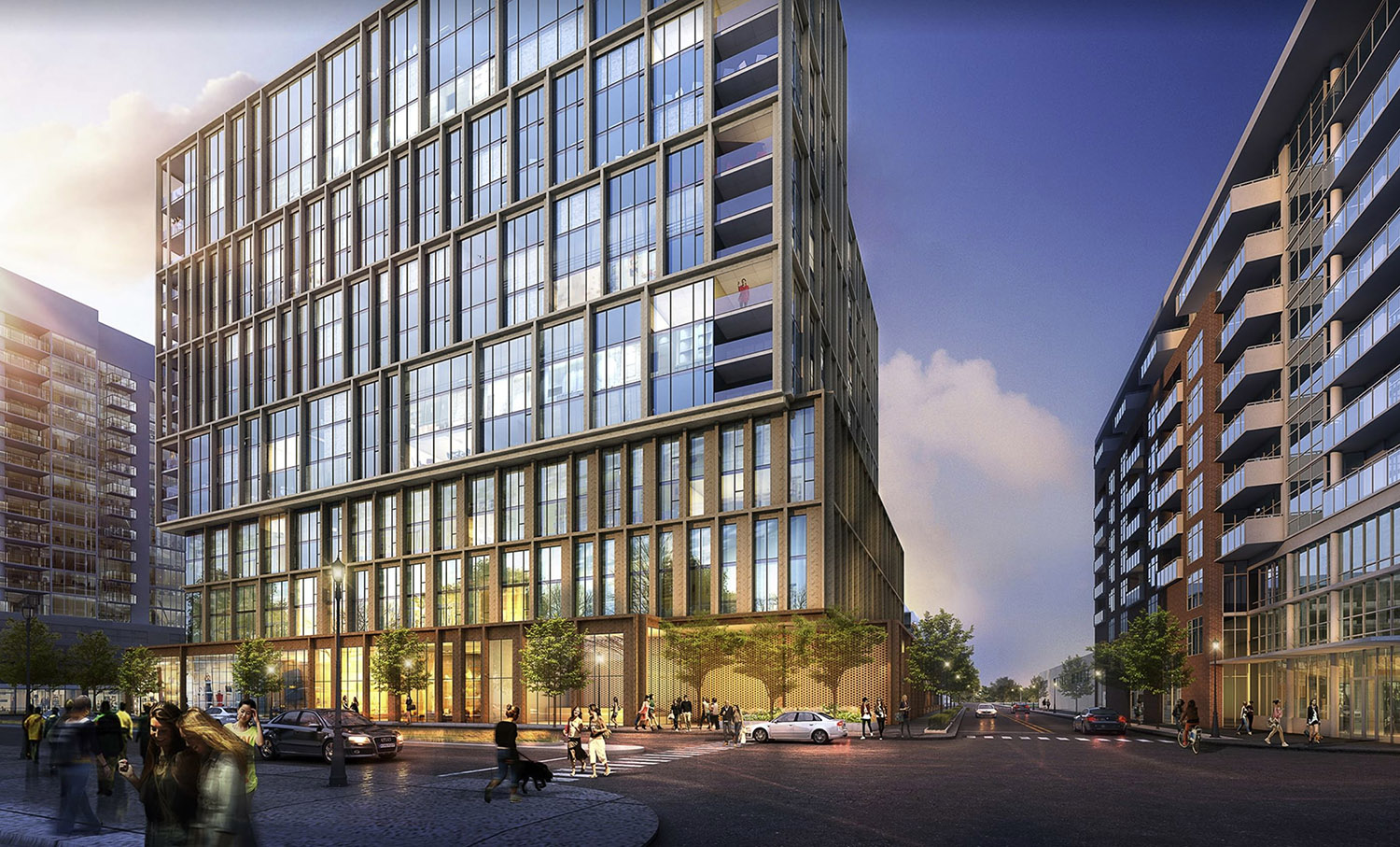 The 17-story tower and townhomes will be connected by a two-story podium holding a range of resident amenities that include a fitness center, rooftop lounges with city views, co-working spaces, and a 50,000-square-foot landscaped deck with a swimming pool, recreational courts, barbecue grills, and nature path. Retail lease spaces are planned at the arterial streets within the podium. Resident parking for more than 300 vehicles and 200 bicycles is also provided within the base of the structure. 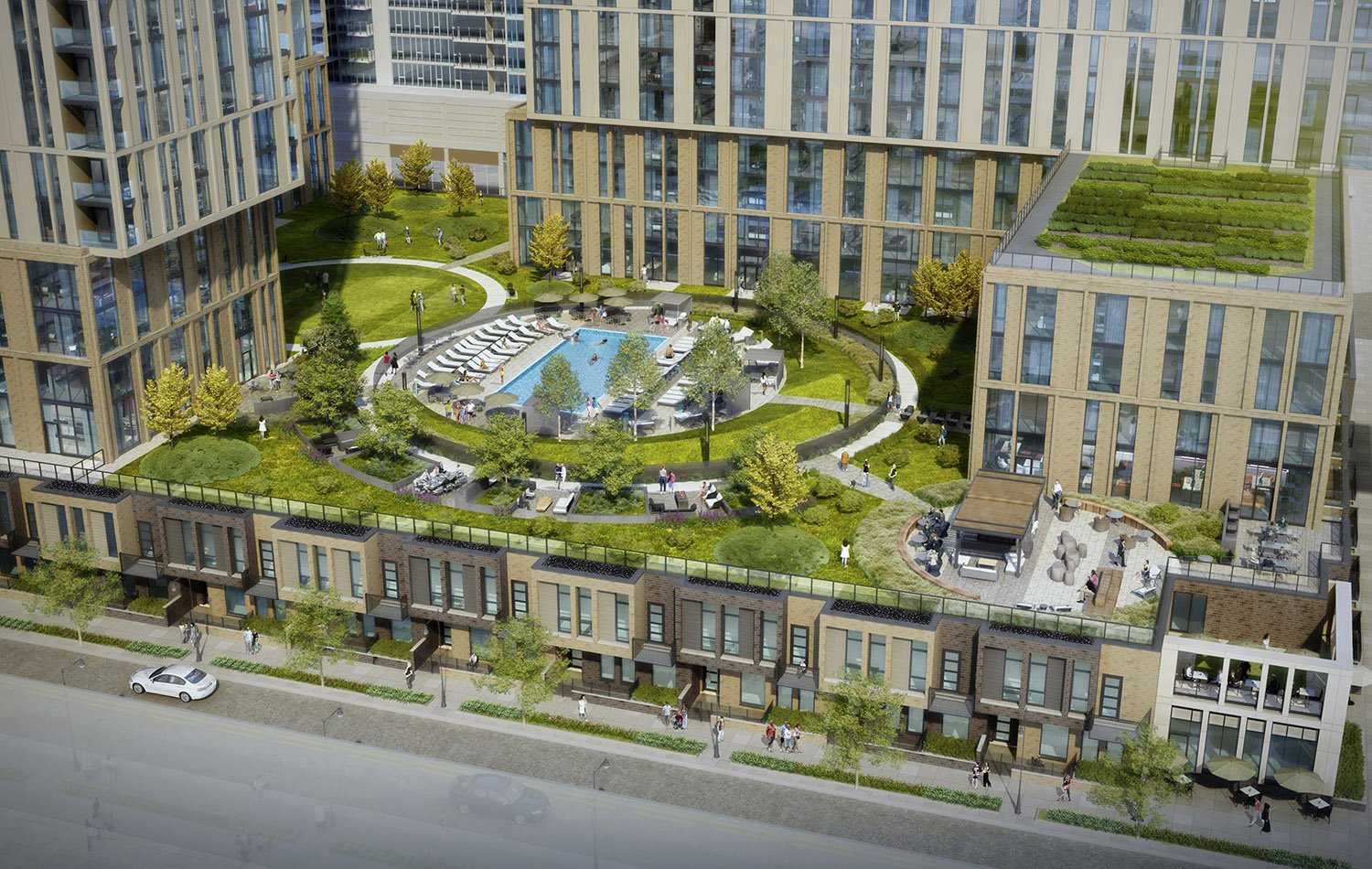 The project is being adorned with Chicago’s largest standalone mural, which will feature Oprah Winfrey. Set for completion in mid-September, the mural will adorn the eastern street-level façade of Porte. Porte commissioned the one-of-a-kind overlapping composition from B_Line Projects, the city’s largest curator of public art murals, to celebrate the neighborhood’s rich history, culture, and diversity. 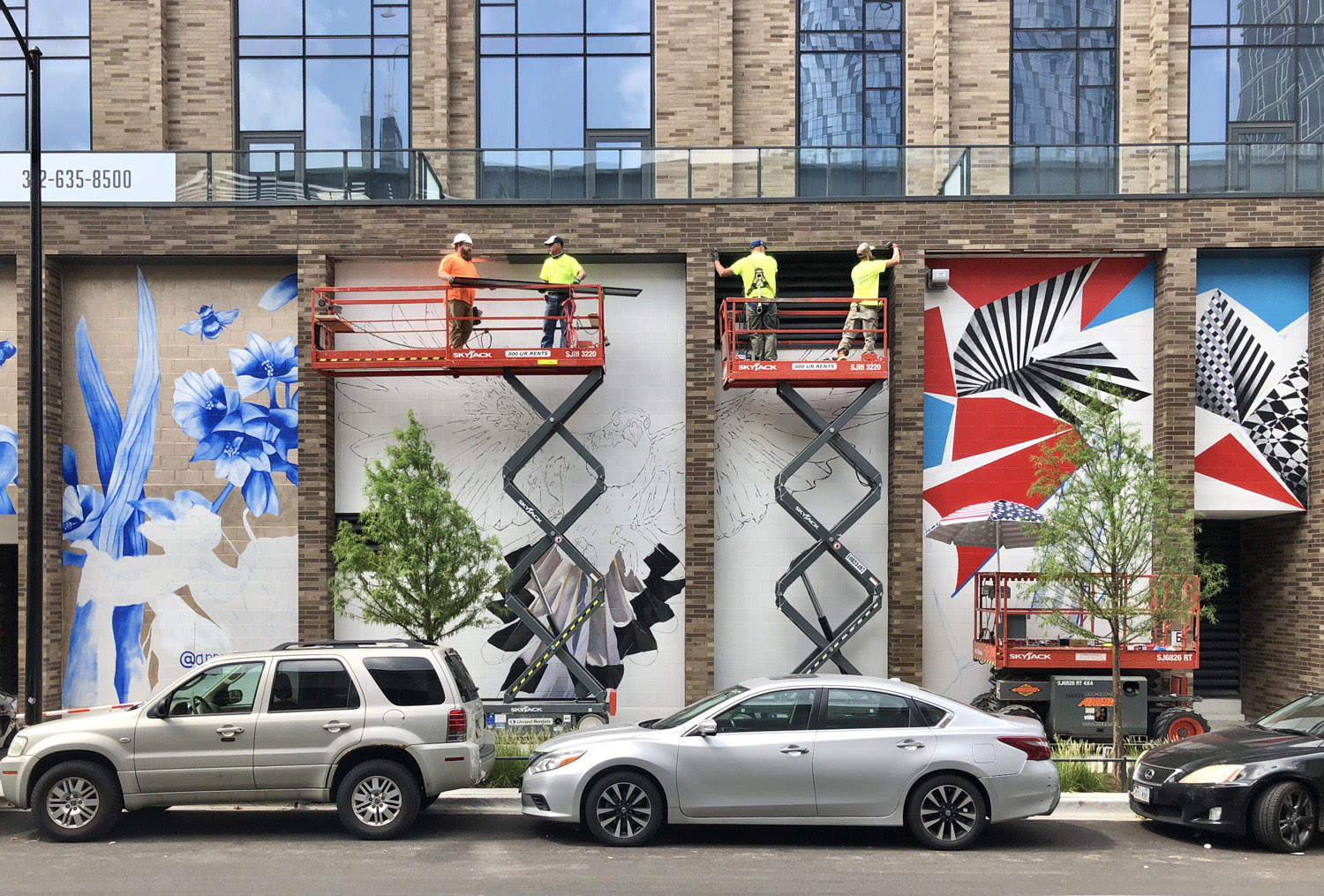 Created by celebrated artists Shawn Michael Warren, Jane Barthes, Anna Murphy, and Kalan Strauss, the hybrid mural will bring each artist’s unique interpretation of the West Loop to life and pay homage to Oprah Winfrey. Once completed, the piece will span the entirety of Green Street from Madison to Monroe Streets – visible to all who live, work, and play in the West Loop.