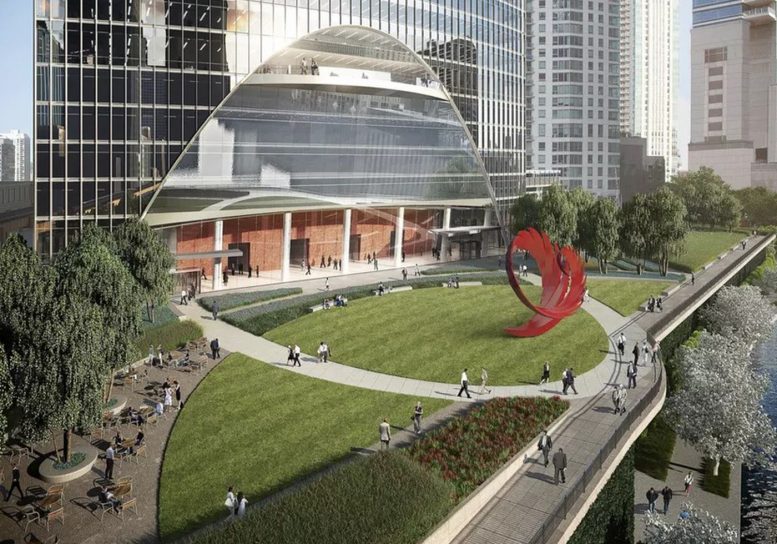 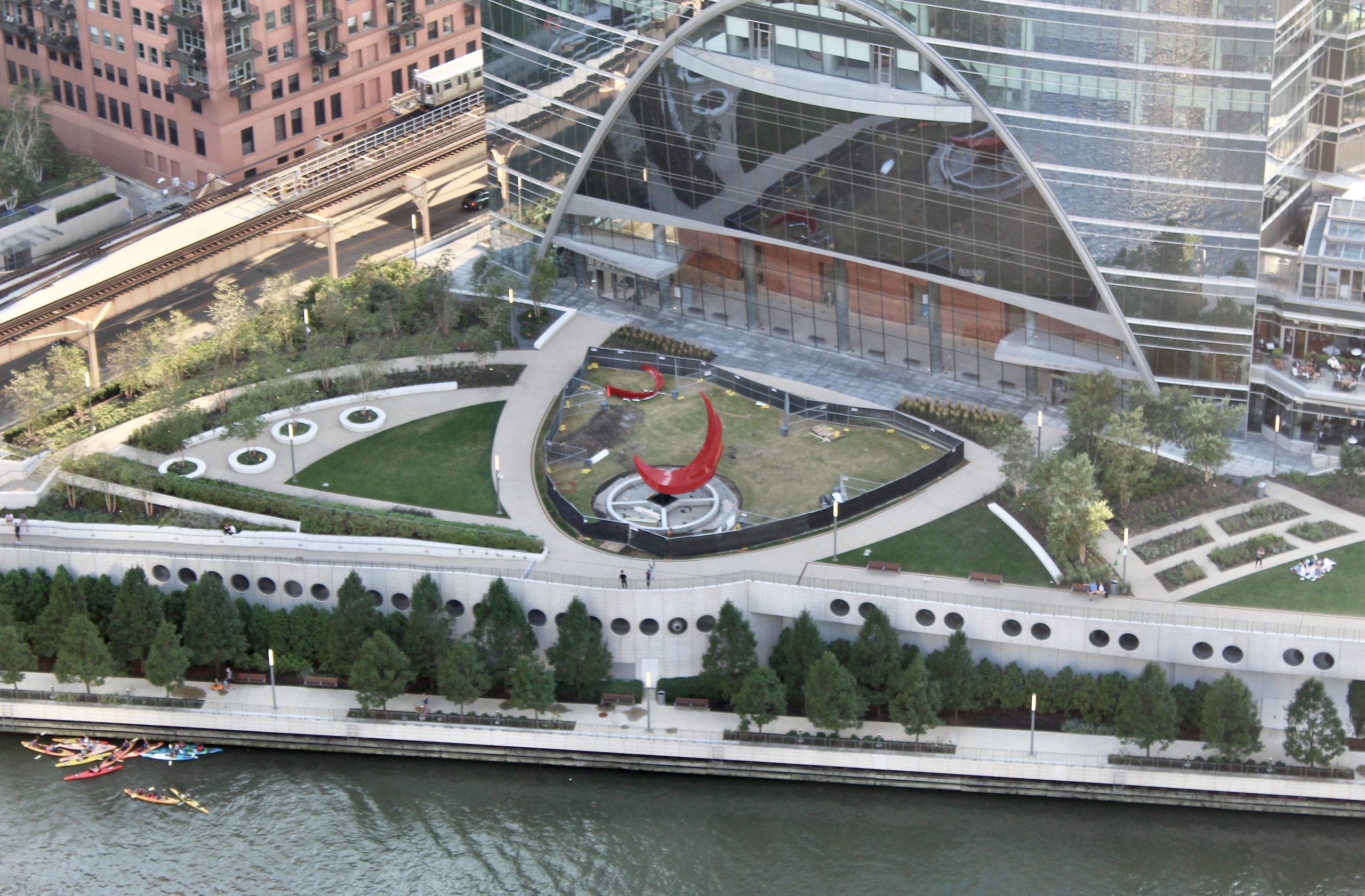 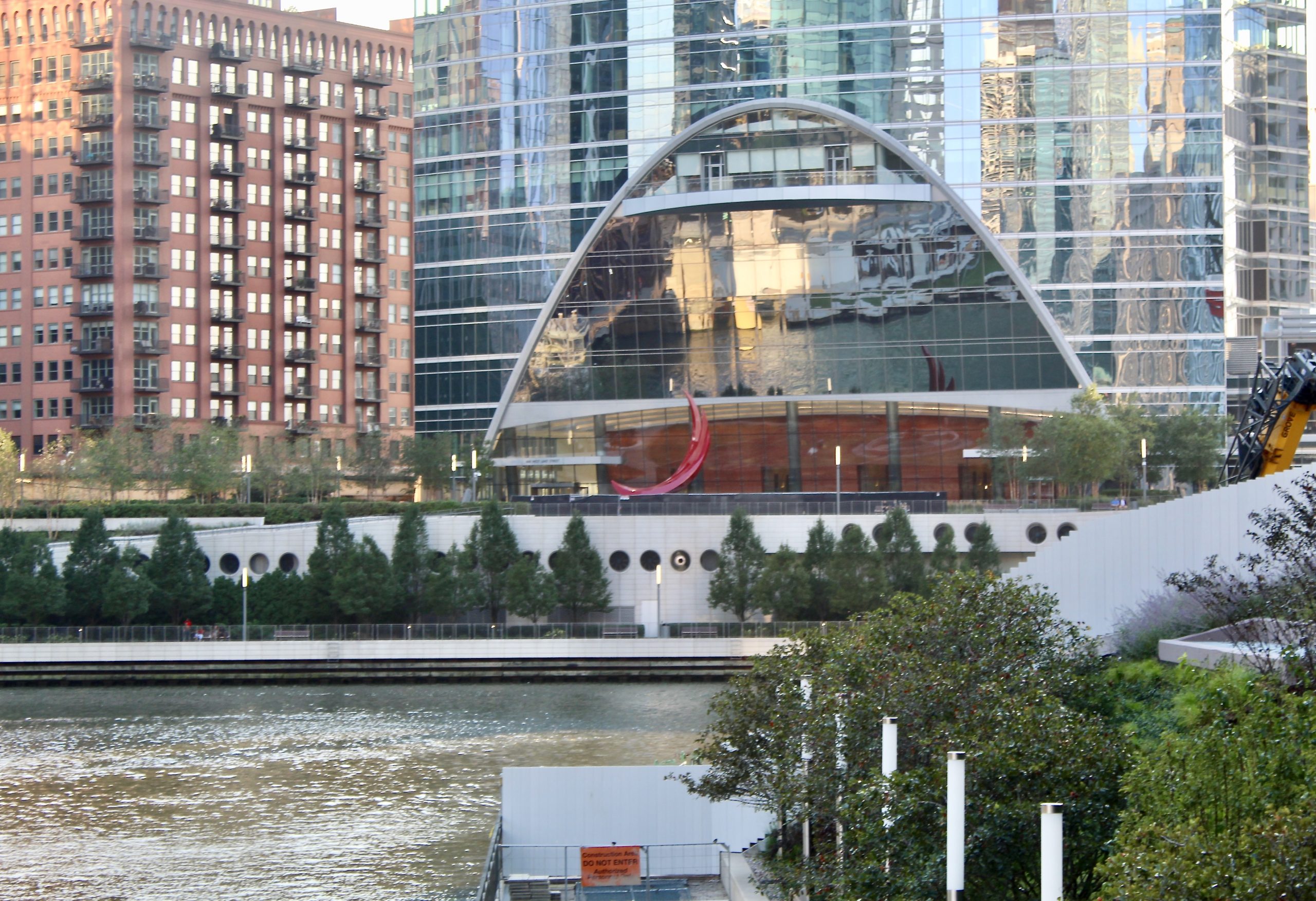 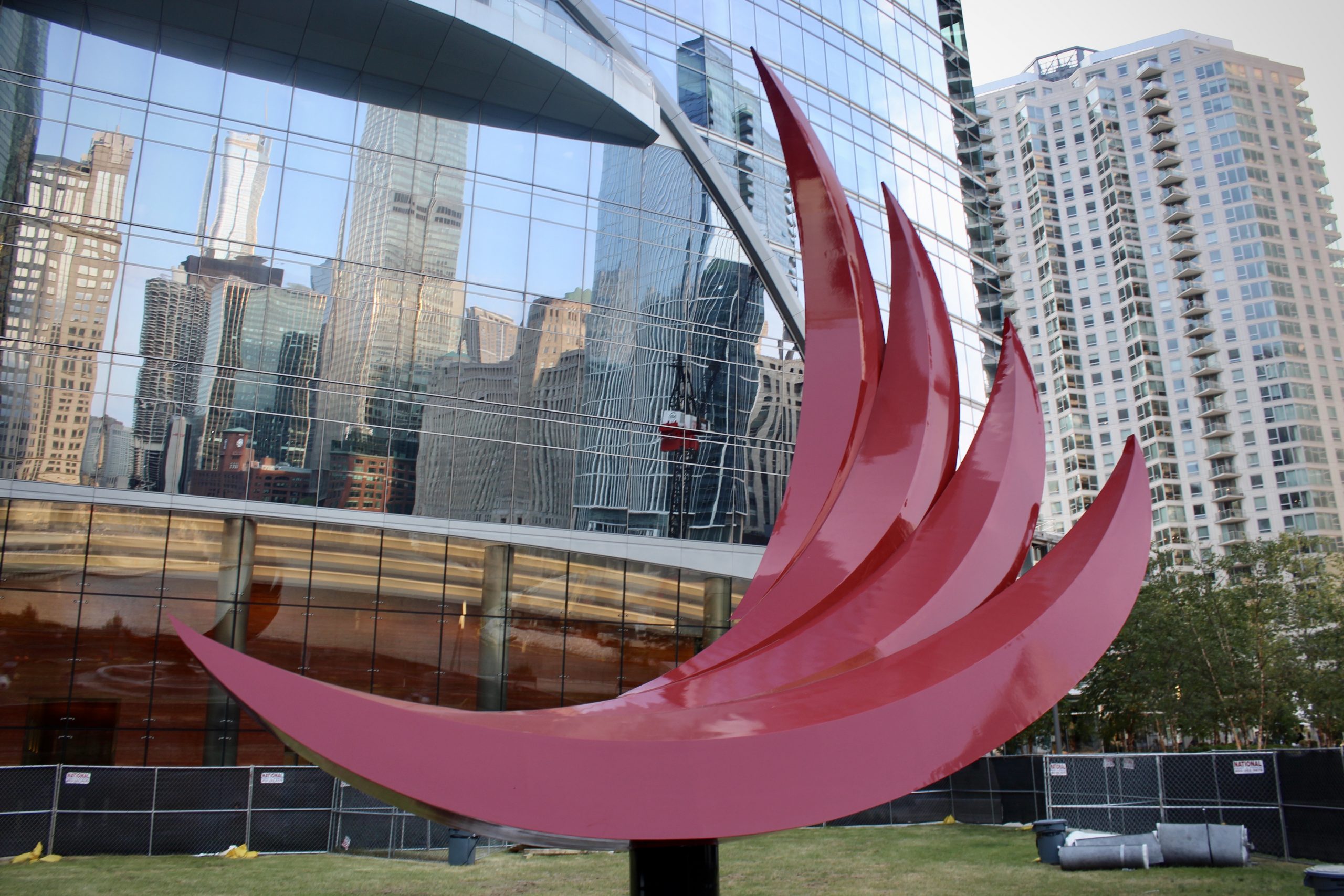 The 29-foot-tall spiraling metal structure will serve as a visual focal point as one looks west toward the the Chicago River’s confluence, where the north and south branches meet its main stem. As seen in photos taken yesterday, the sculpture currently stands partially assembled, with a second portion set to the side. 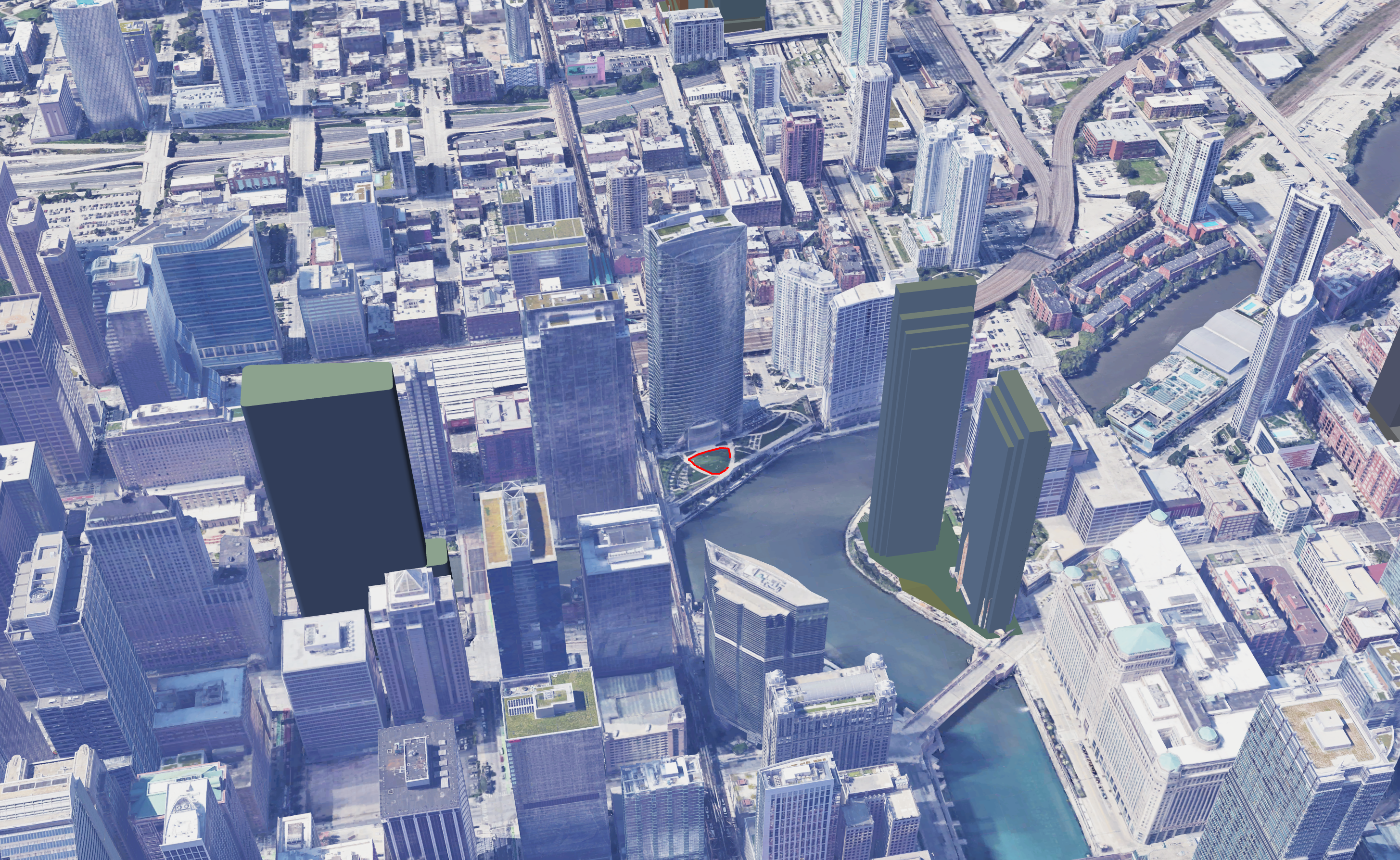 The site of “Constellation” (red). Visualization and models by Jack Crawford via Google Earth

The sculpture’s surrounding River Point Park, which is open to the public, lies at the base of the River Point building, a 732-foot-tall office tower completed in 2017. Lining the adjacent river banks nearby also includes Chicago’s Riverwalk, whose most continuous stretch runs along the south side of the main branch, beginning less than a two-minute walk from the sculpture.

As far as visitor access, nearby transportation provides a variety of options. Vehicles have access to street parking along River Point’s adjacent N Canal Street, as well as several garages in the vicinity. Nearby bus transit includes a four-minute walk west to the Jefferson & Lake stop for route 56, and a four-minute walk south to the Canal & Randolph/Washington stop for routes 120, 125, and 130.

Hines, who has overseen the River Point park and tower, has privately funded the sculpture. As far as the construction cost, the figure has not been publicly disclosed, although a 2018 Chicago Tribune article indicated that the figure was in the “millions of dollars” range.

The project’s principal architect, Santiago Calatrava, designed a variety of iconic projects including the $4 billion World Trade Center Transit Hub and Malmö’s Turning Torso. Calatrava also previously designed a 2,000-foot-tall tower for Chicago, known as the Chicago Spire, although these plans were canceled in 2014. While the intended name of his more recent project is “Constellation,” Calatrava’s sculptural work will likely receive a similar crowdsourced nickname to other ones around the city, such as “The Bean,” known officially as “Cloud Gate.” 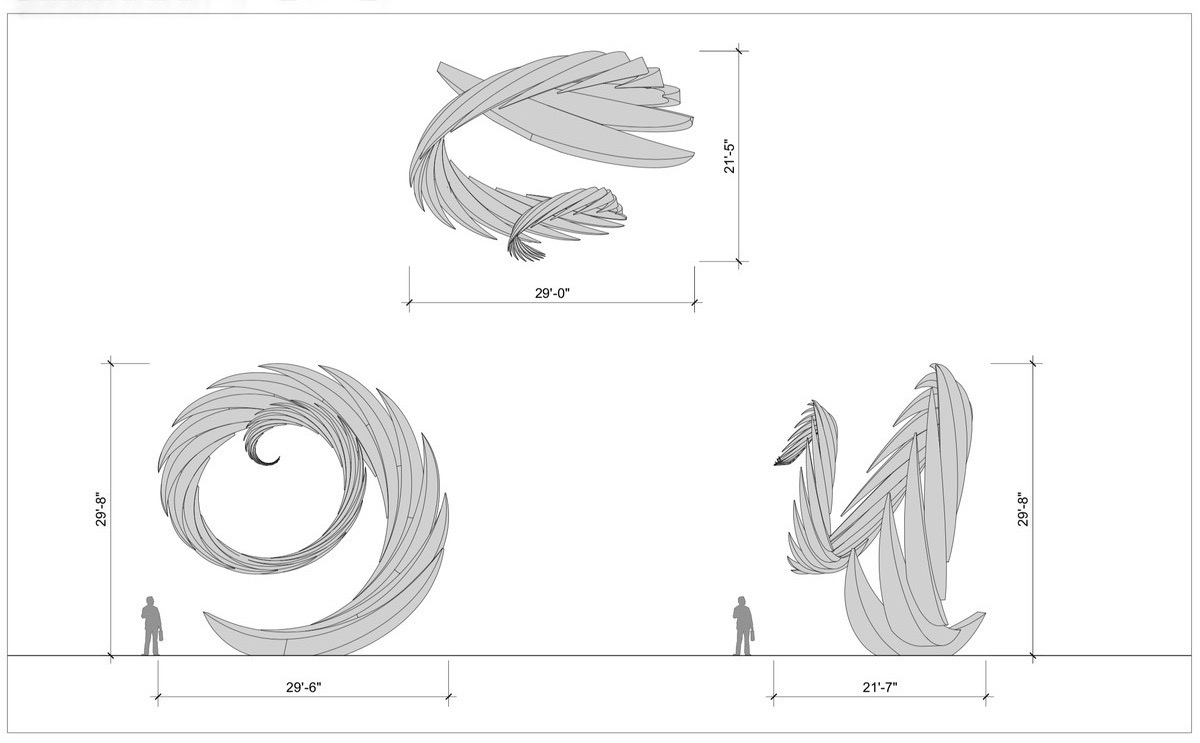 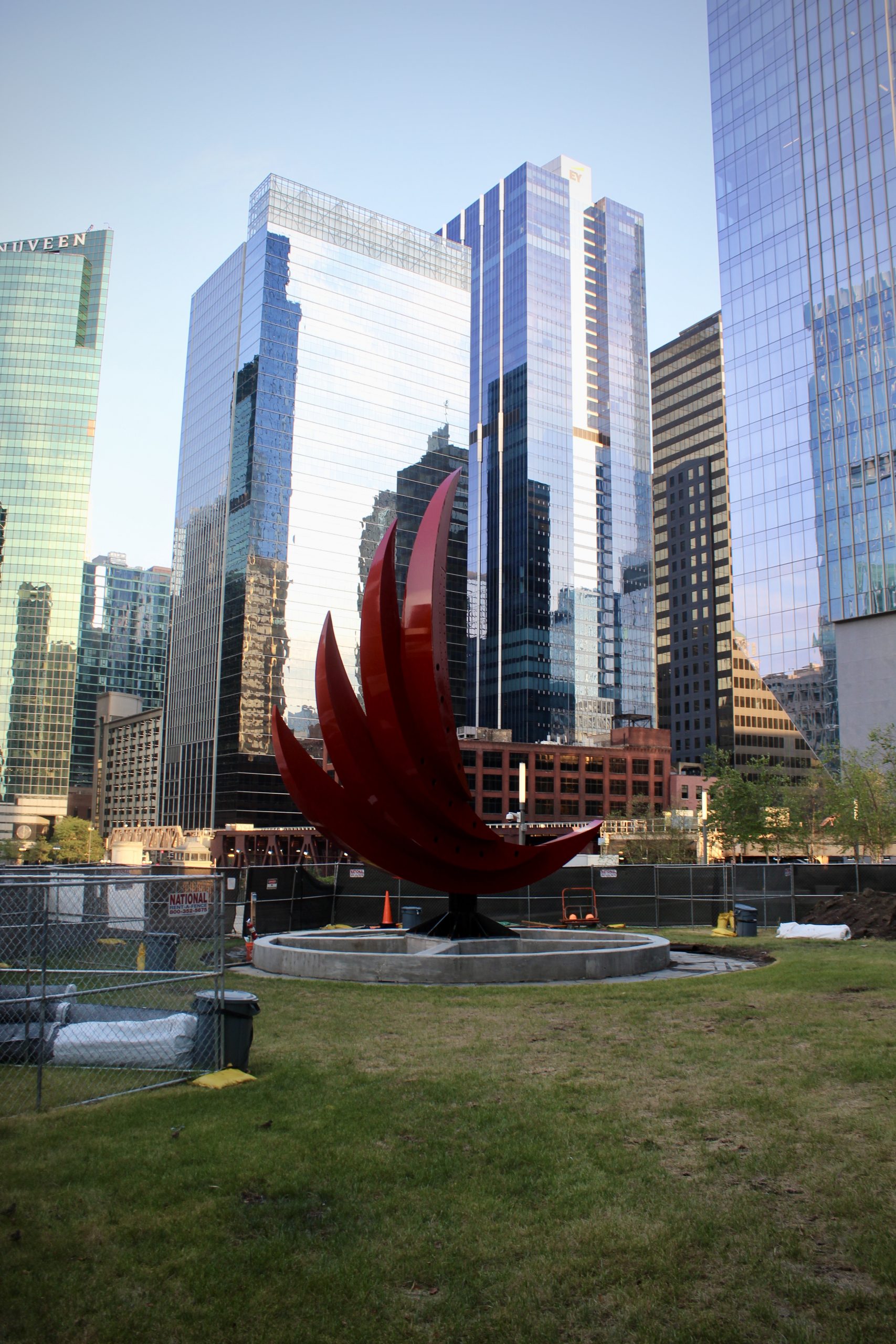 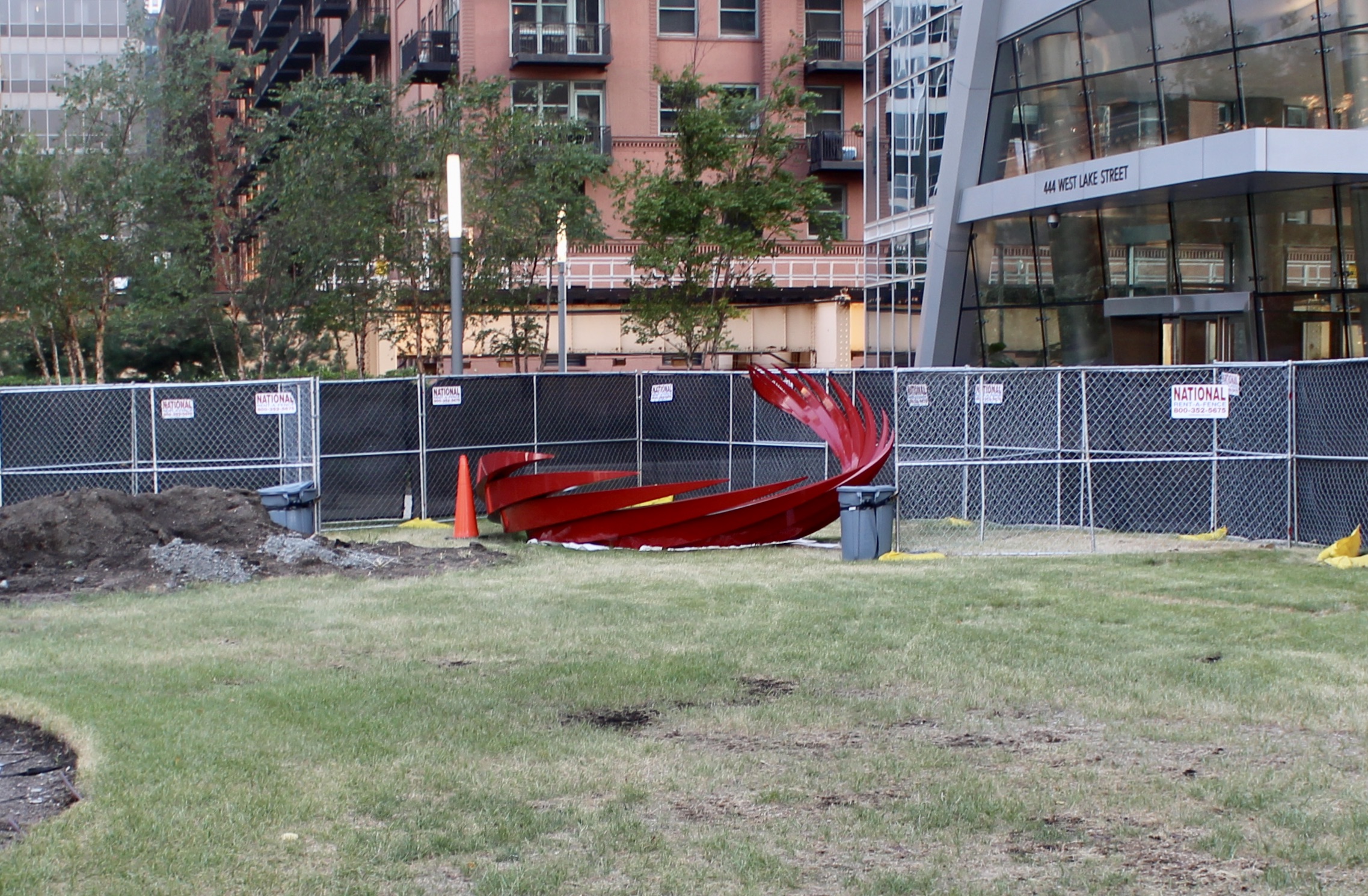 Additional portion of “Constellation” by Santiago Calatrava in a nearby staging area. Photo by Jack Crawford

From a design lens, the sculpture’s bright red crescent pieces are positioned next to one another to tangentially align in a spiral pattern. These pieces altogether convey a centripetal momentum, seeming to fan outward as would water when spinning.

In July 2020, the Chicago Tribune reported that a crack was discovered in one of the pieces, prompting the replacement process and postponing the full assembly. Some of the already assembled pieces were recently moved to a staging area to the south side of the 7,500-square-foot construction site. The remaining timeline has not yet been indicated.