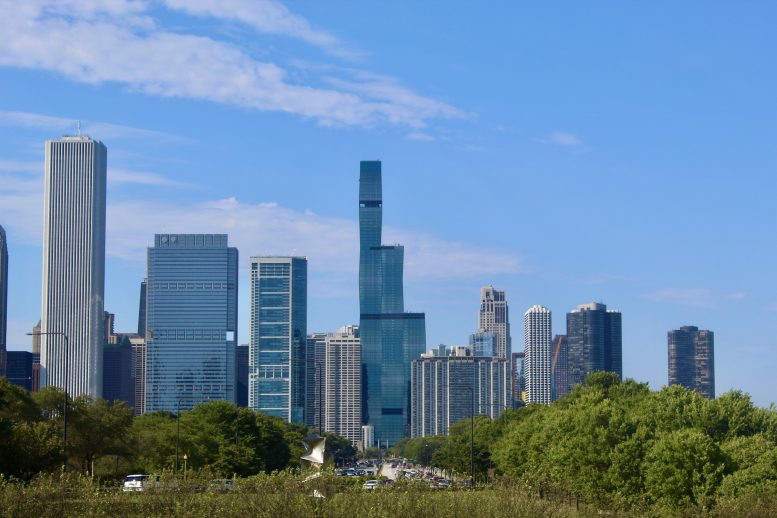 YIMBY has updated construction photos for the nearly complete 101-story Vista Tower, designed by Chicago-based Jeanne Gang and developed by Magellan Group. The 1.9 million-square-foot tower is now Chicago’s third tallest building at 1,191 feet, outpacing even the nearby Aon Center that previously stood unrivaled in the Lakeshore East neighborhood. The mixed-use building’s high profile also stems from the unique frustum-stack composition that forms its massing, adding to the collection of bold designs that the city knows well. 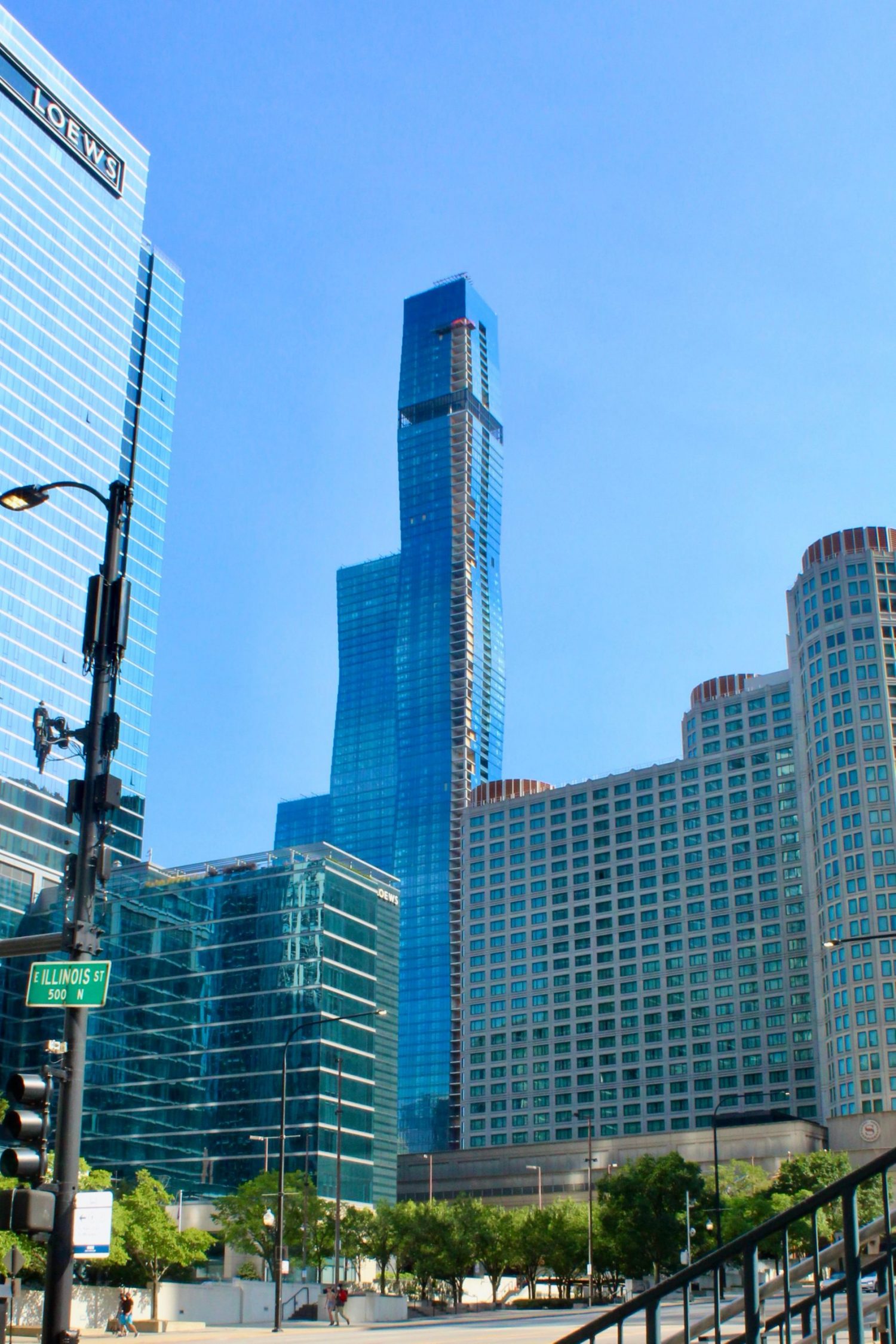 Vista tower, facing southeast from across the river. Photo by Jack Crawford

The towering development’s official address is 375 E Wacker Drive, located just along the mouth of the Chicago River. An array of transportation options are available nearby, including a four-minute walk south to bus route 60’s Harbor Drive & Randolph stop. A 16-minute walk west are the nearest CTA L stations are State/Lake and Washington/Wabash, serviced by the Brown, Green, Orange, Pink, and Purple Lines. 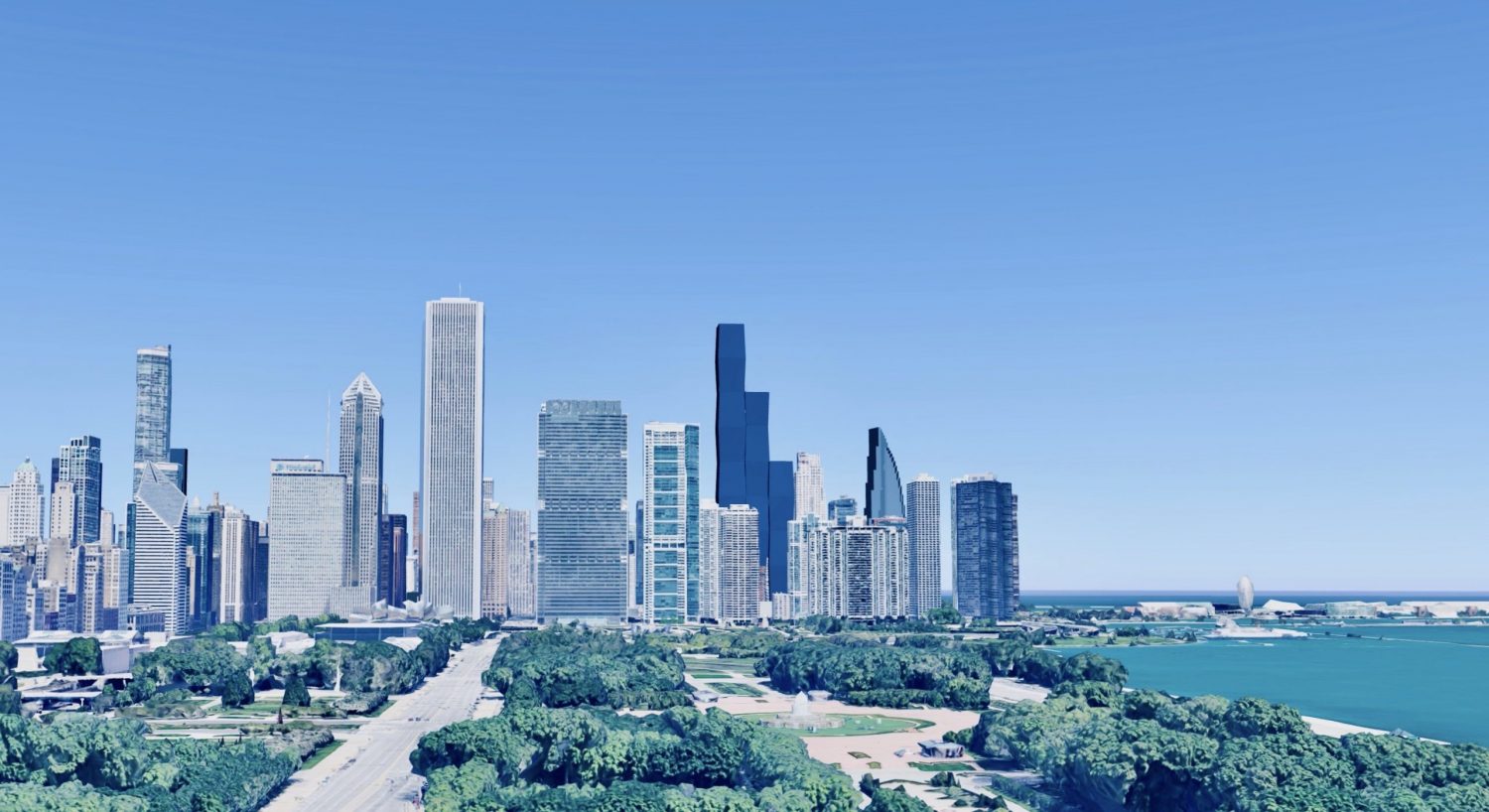 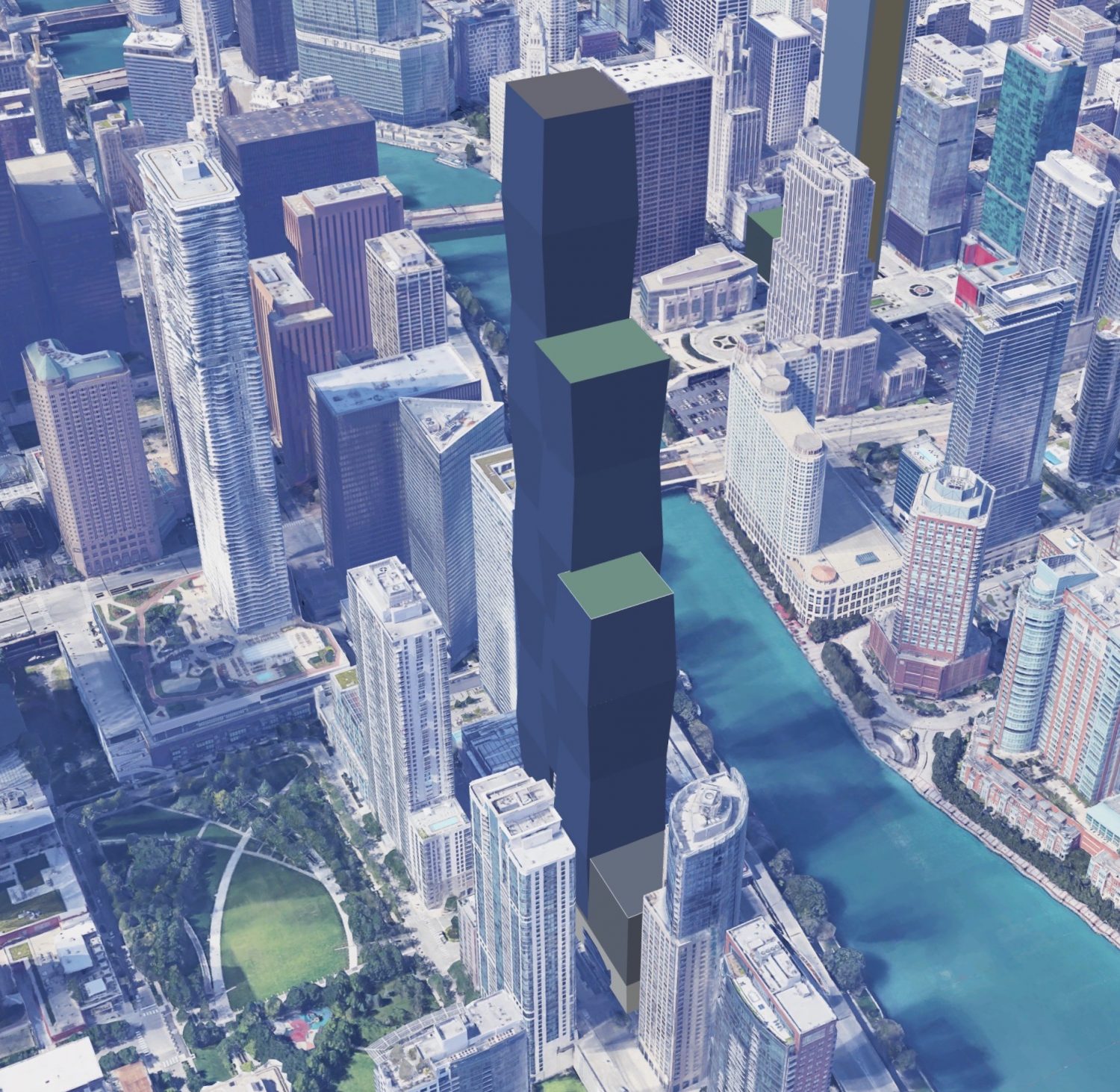 The project’s programming consists of 396 condominium units and a 191-room hotel. Residences will range from single bedrooms to full-floor “Sky 360 Penthouses” starting on the 71st floor. Additional amenities include a fitness center, golf simulator, outdoor terrace space, and a demonstration kitchen for cooking classes. Parking for 346 cars is also planned. 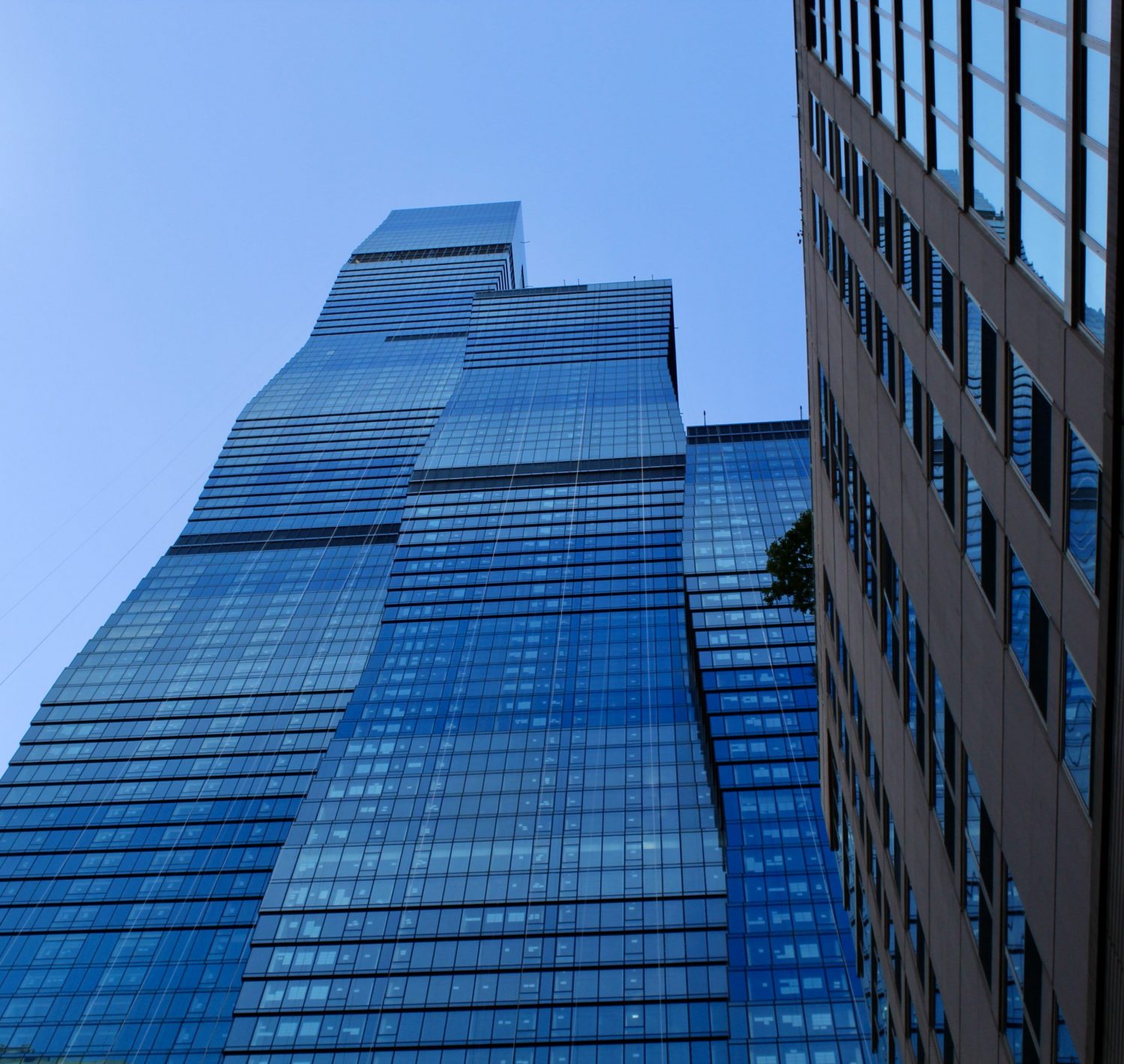 Vista Tower, facing up and north. Photo by Jack Crawford 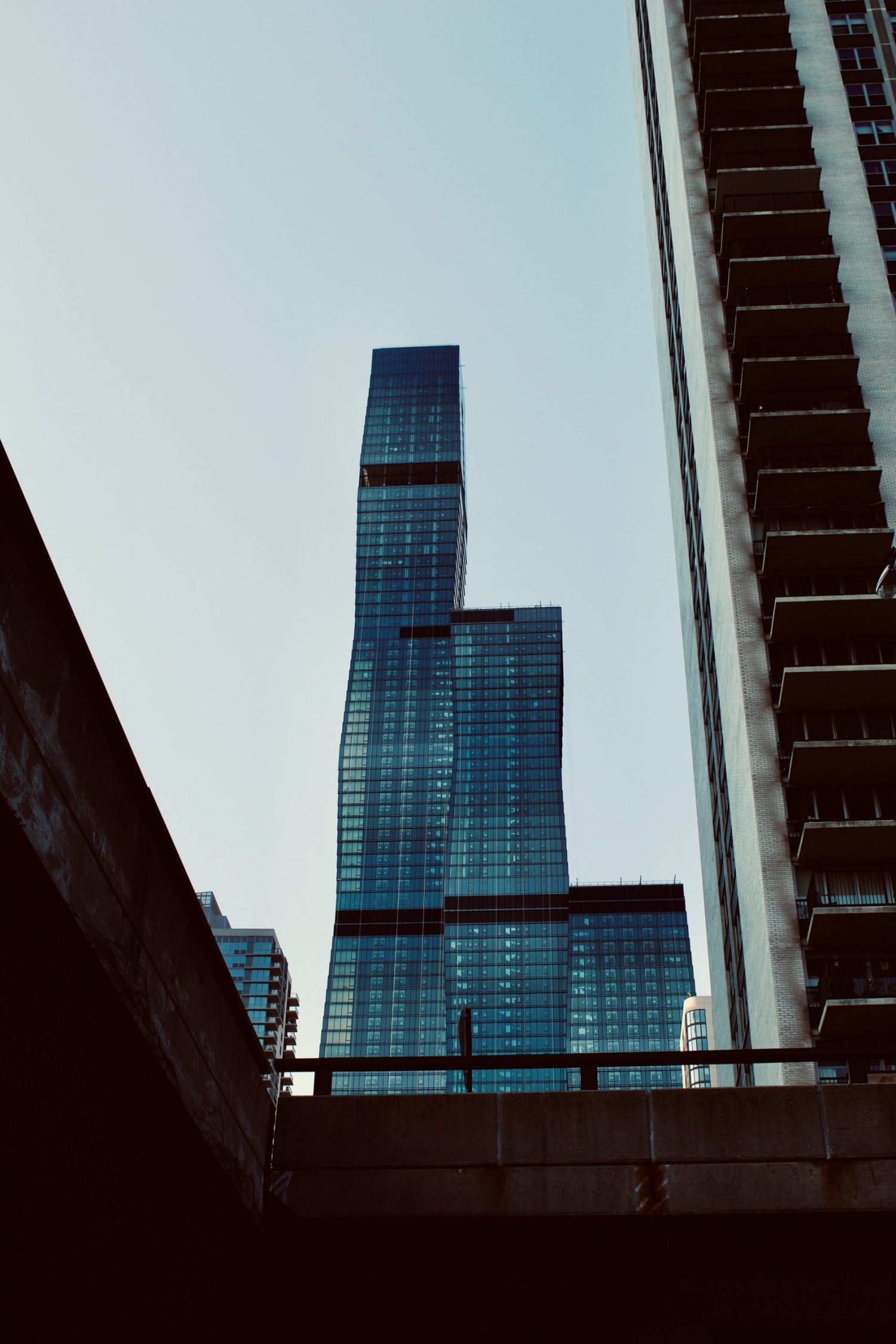 Enclosing the interior space is a massing and exterior facade that are closely linked in their conception. The windows vary in color to meet increasing heat-load demands as the massing’s frustums angle inward. The frustums themselves are both additive and subtractive, adding additional and more pronounced viewing angles for tenants, while carving out further room for outdoor space, as described by Gang’s firm Studio Gang. Gang has designed a multitude of other Chicago projects, including the in-progress O’Hare Airport expansion plan and the nearby Aqua Tower, completed in 2009. 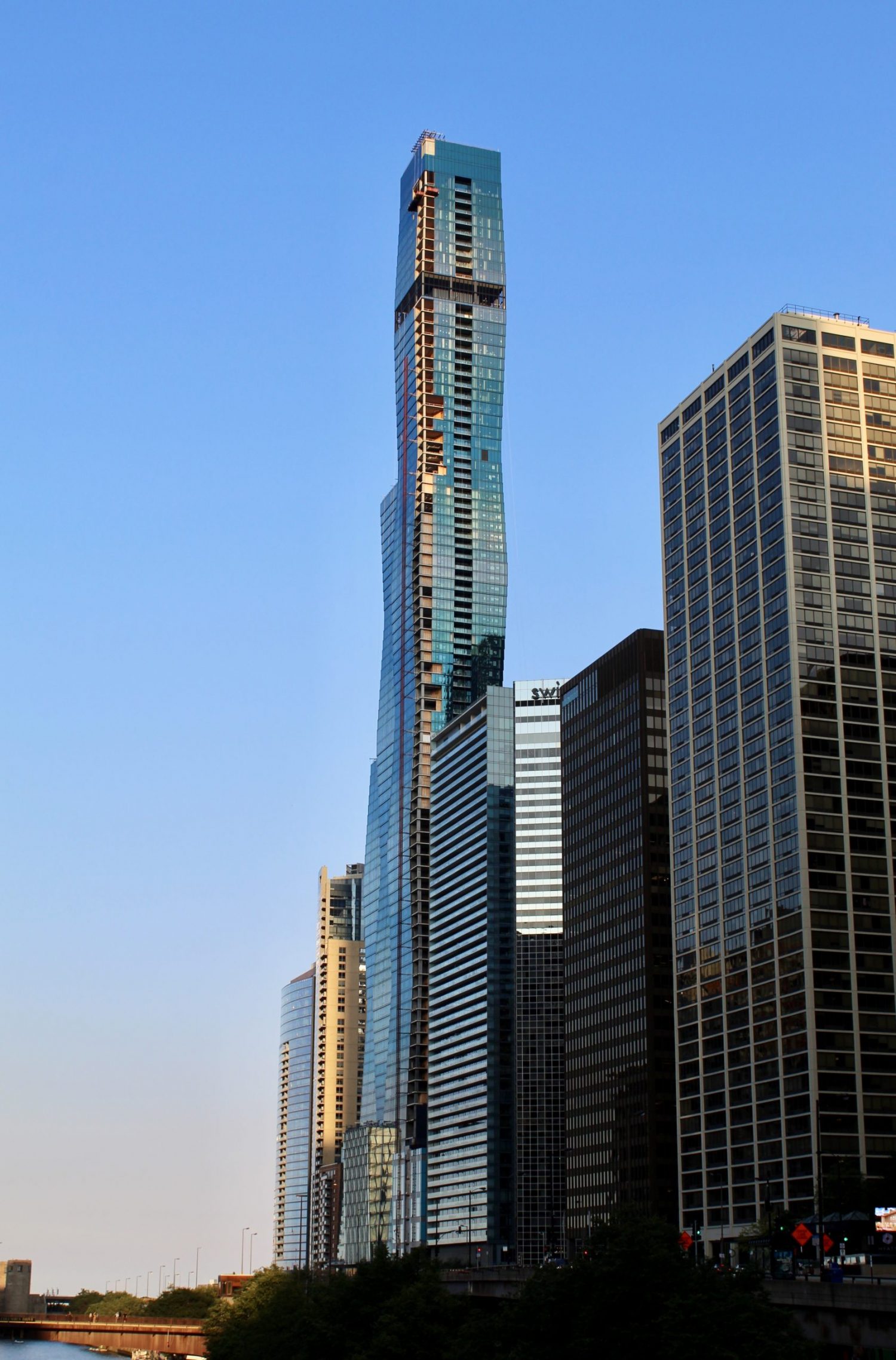 Vista Tower, facing east towards the mouth of the Chicago River. Photo by Jack Crawford

The only work remaining on the exterior is a thin vertical gap in the northwest corner of the building, stretching the full height where construction elevators used to be. Despite recent news from Crain’s Chicago Business regarding Wanda Group’s departure from the co-developed project, Magellan Group’s construction timeline still appears on target for an opening this fall.

Be the first to comment on "1,191-Foot-Tall Vista Tower Nears Completion in Lakeshore East"