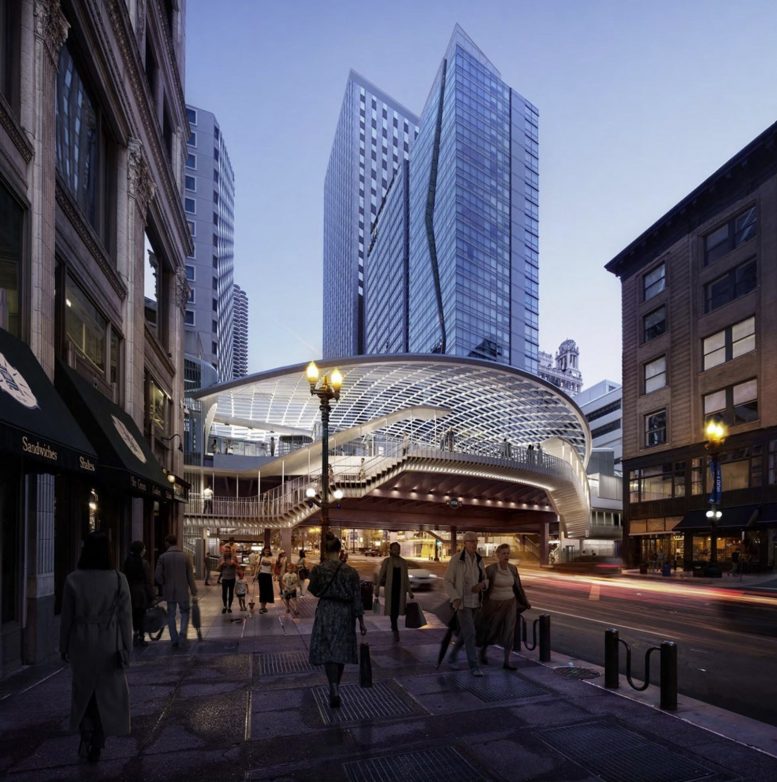 Renderings have been revealed for a rebuilt State/Lake CTA L Station in The Loop. Located at the intersection of W Lake Street and N State Street, the station connects numerous CTA L Lines including the Green, Brown, Purple, Orange, and Pink Lines. Connections to the Red Line and multiple bus lines are also possible at this location. Built for the Chicago Transit Authority, the CTA is collaborating with the Chicago Department of Transportation (CDOT) on the project. 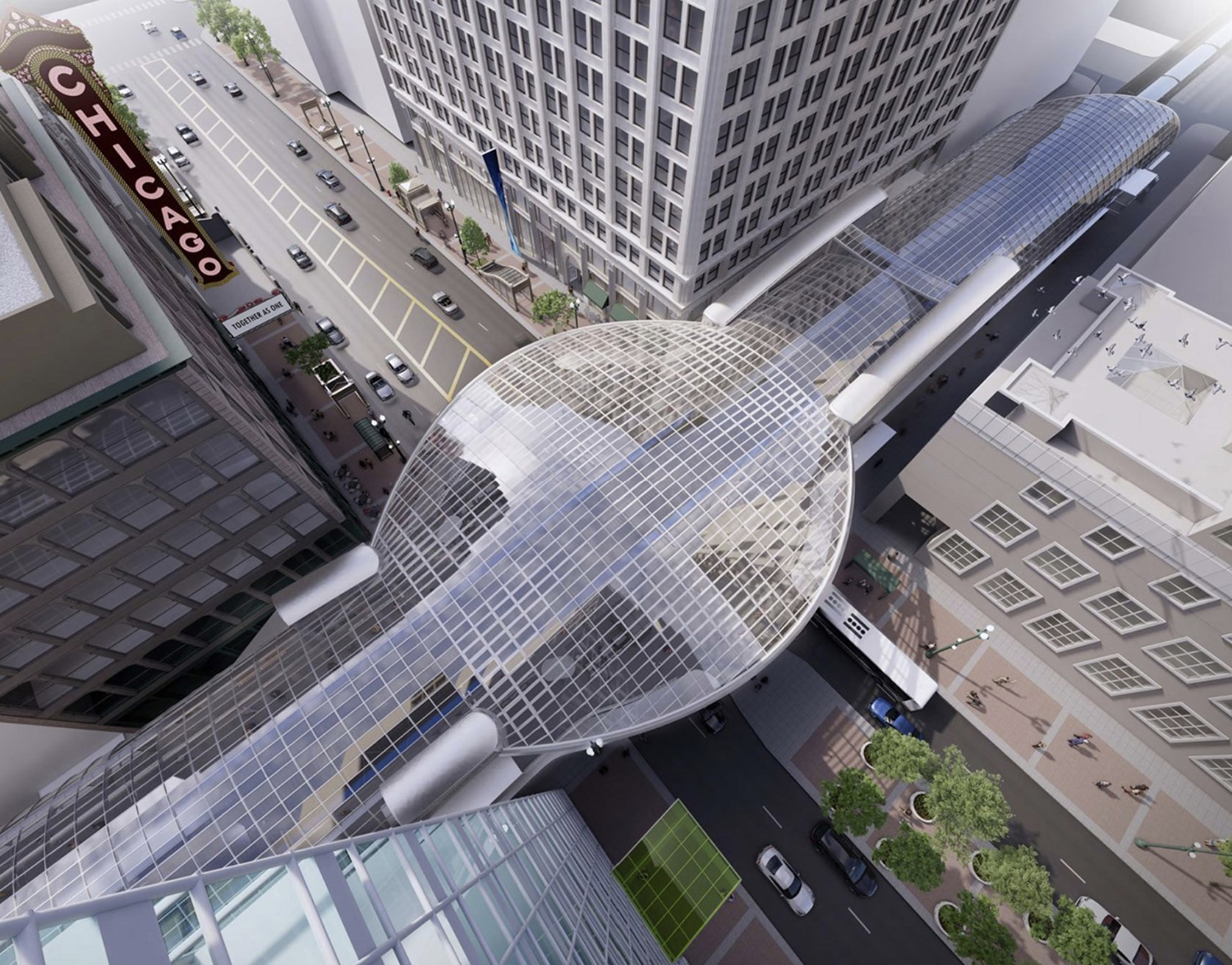 The new State/Lake CTA station will replace the more than 100-year-old existing structure with a modern, fully accessible rail hub with wider platforms and a host of customer amenities. It includes wide balconies open to the public facing north and south that create scenic overlooks of N State Street, including an up-close view of the landmark Chicago Theater. 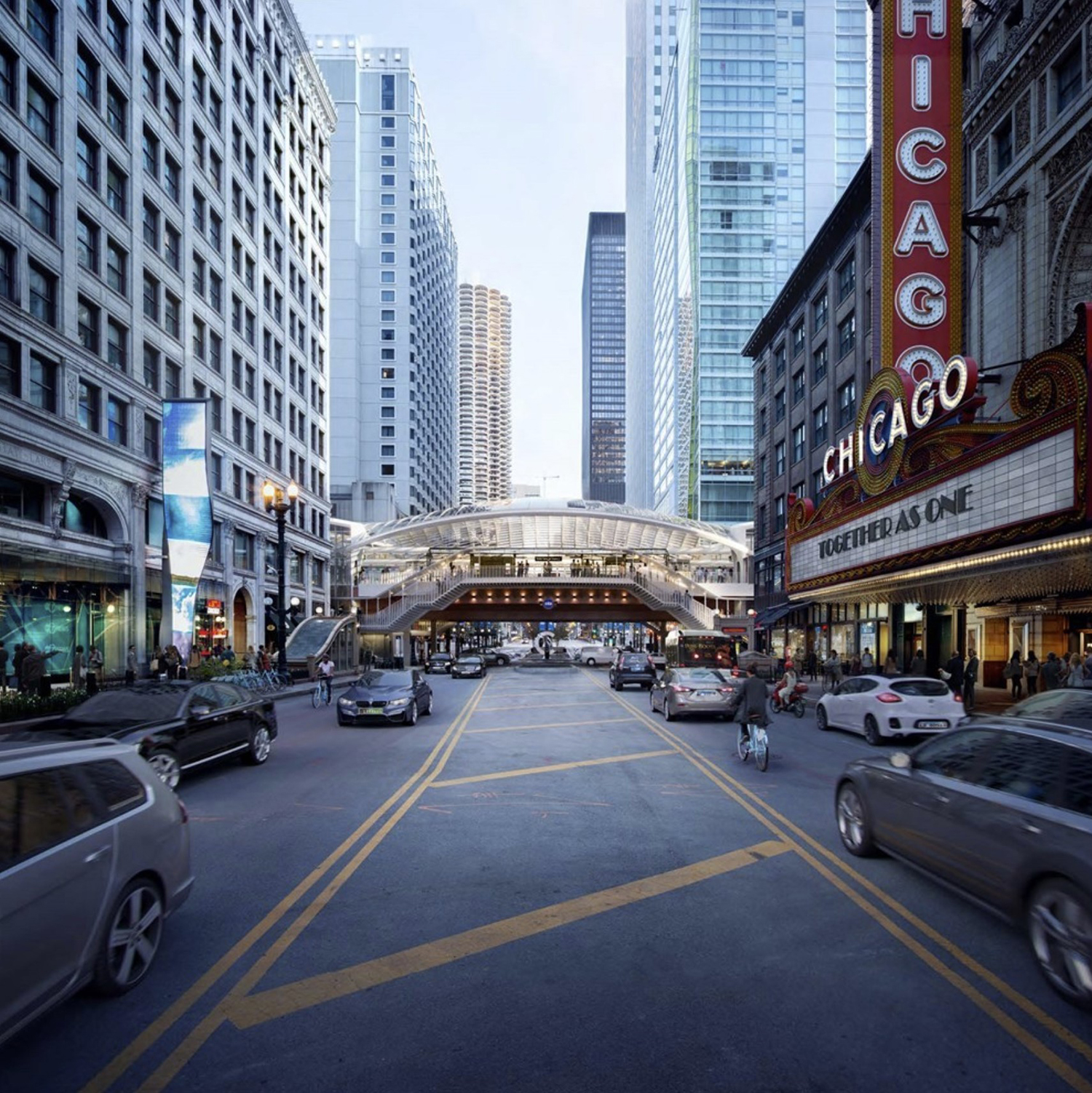 The current State/Lake station was originally built in 1895, as part of the original Loop elevated, and in 2019 was the second-busiest station on the Loop ‘L’, with more than 3.7 million annual entries. The new design features a blend of old and new, retaining original design elements such as salvaged posts and railings that frame the vending and customer assistance kiosks. 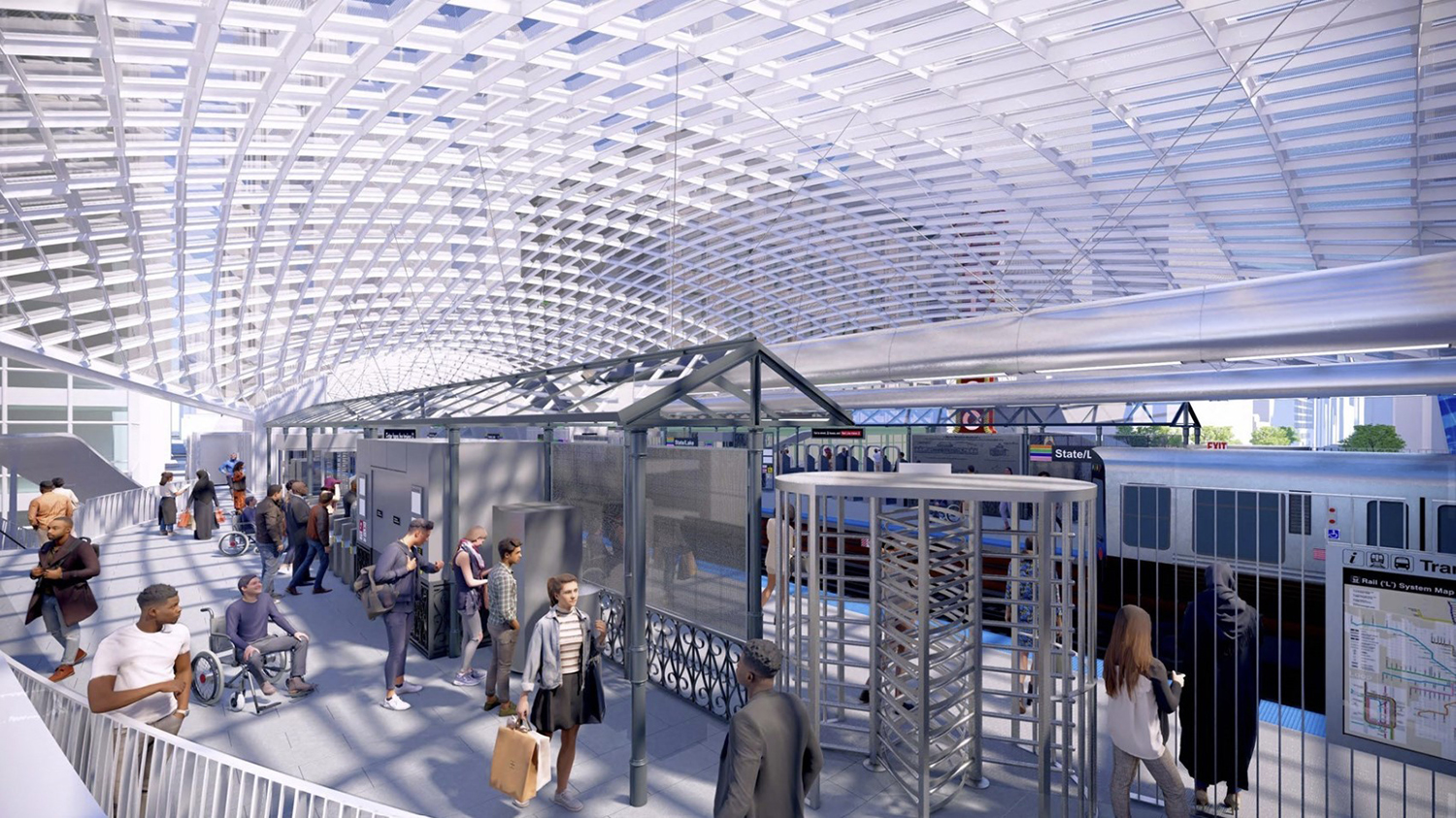 The design and construction process are being led by CDOT on behalf of the CTA. Designed by Skidmore Owings & Merrill, the station features platforms that are double the current width to better accommodate customers. It also includes a full-coverage, glass canopy to protect customers from rain and snow, as well as a walkway connecting the inner and outer platforms. 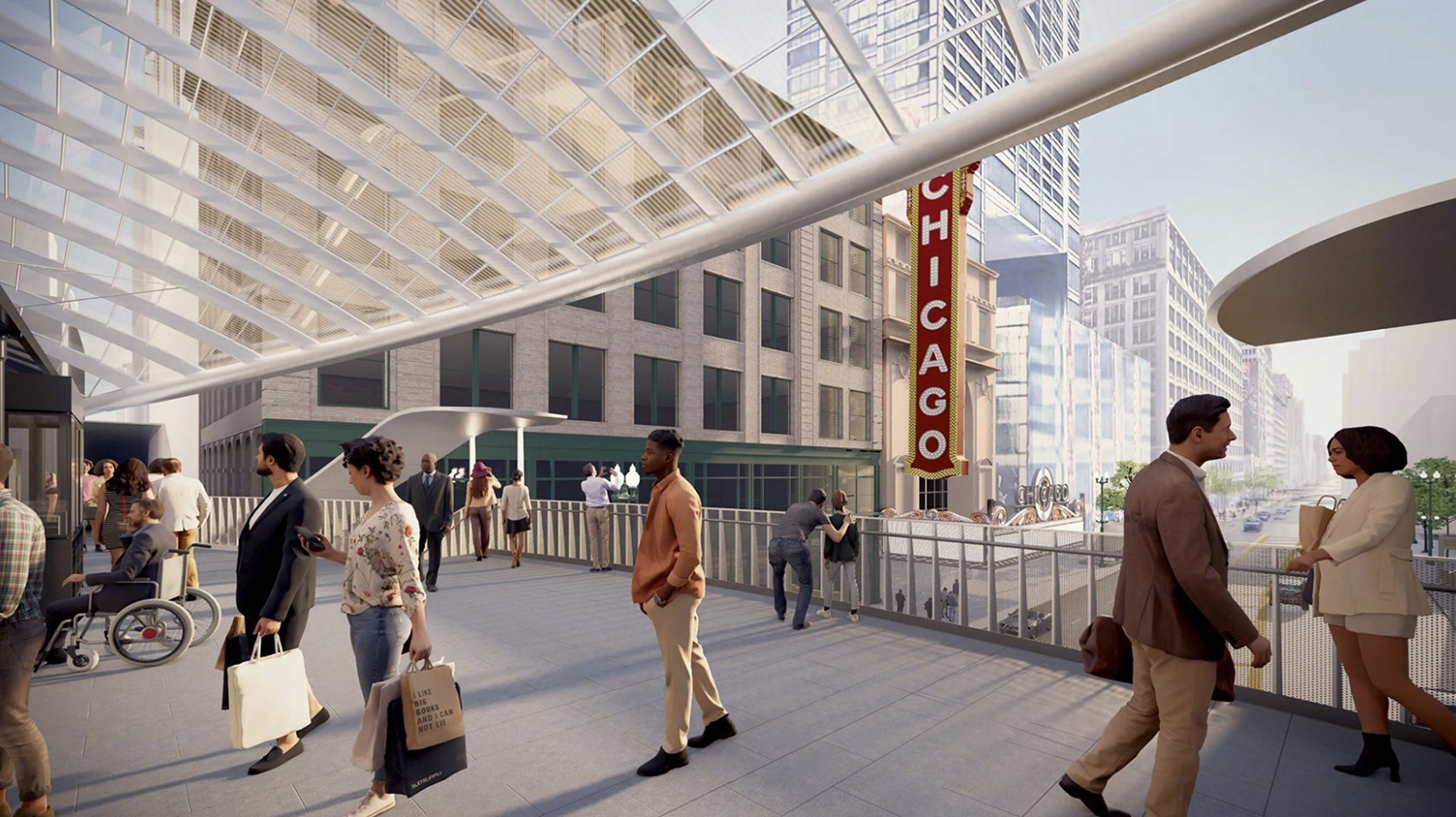 The project will also add four elevators located at each corner of State and Lake, up from zero, to make the station fully accessible, marking a big step in the CTA’s All Stations Accessibility Plan, a blueprint to make all CTA train stations accessible. The new station will also improve connectivity between the elevated lines of the downtown Loop and the underground Red Line on State Street. 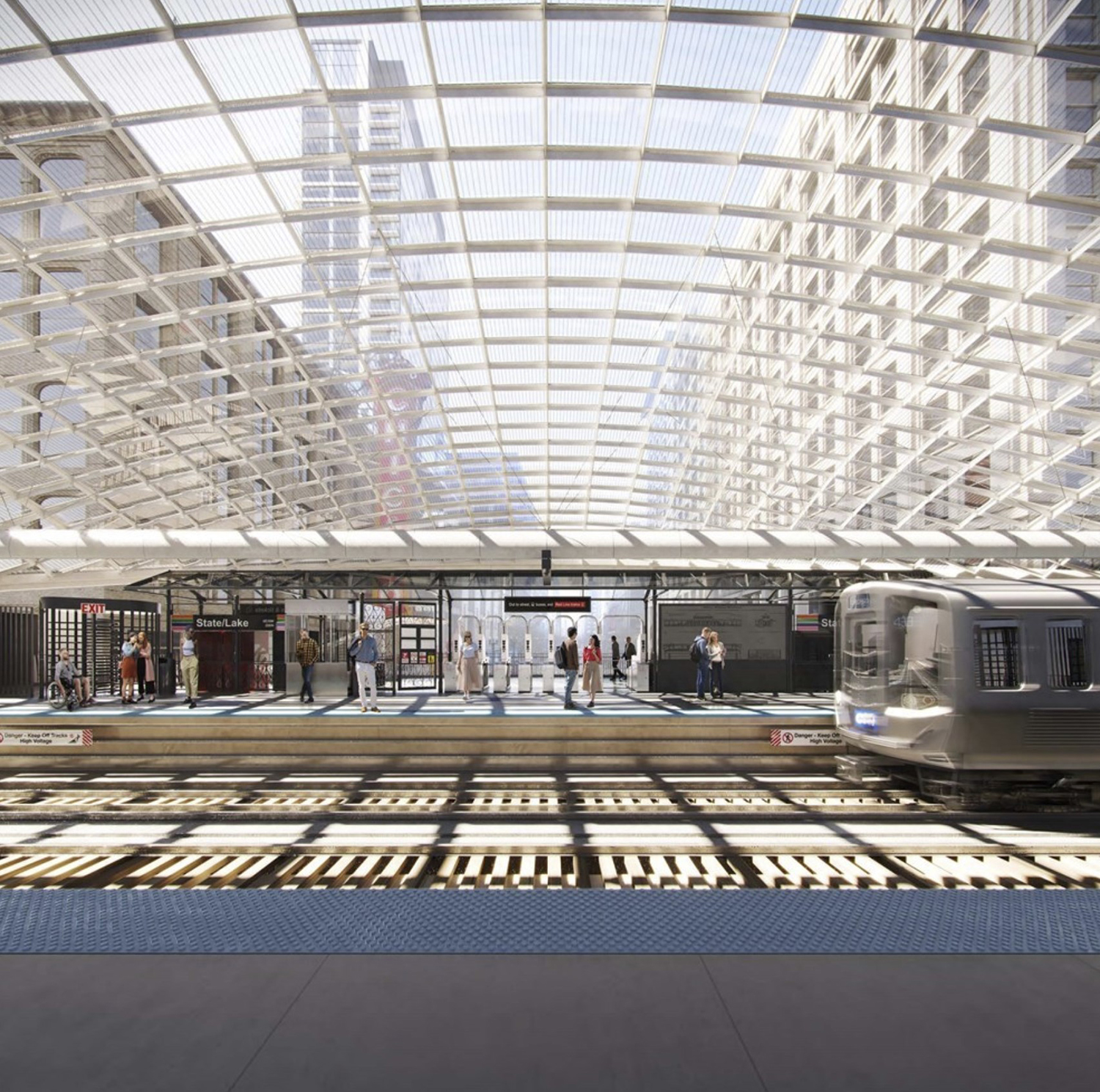 CDOT is currently going through the federal National Environmental Policy Act process which is required in order to be eligible for federal funding. It includes extensive outreach and consultation with stakeholders, including owners of adjacent properties.

To date, the project has been awarded $11 million in engineering and design funding and $119 million in construction funding through the federal Congestion Mitigation and Air Quality Program. The total estimated project cost is approximately $180 million, and the City of Chicago is seeking additional funding from various potential sources. Once the design process is complete and full funding is obtained, it will take about three years to complete construction of the new station.