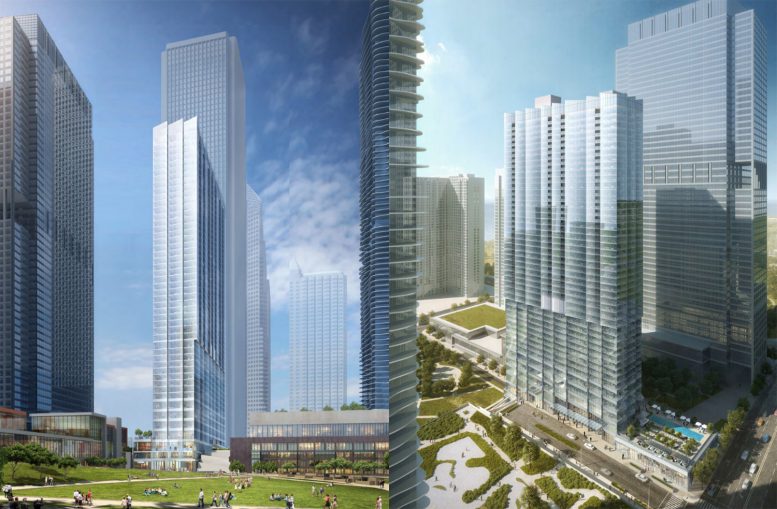 Renderings have been revealed of an updated design for the Parcel O Tower at Lakeshore East. Located at 193 N Columbus Drive, the site within the larger mega development is currently a vacant lot. Studio Gang’s Aqua Tower neighbors the site to the north while the Blue Cross Blue Shield Tower by Goettsch Partners stands just to the south. Magellan Development Group is in charge of the tower project. 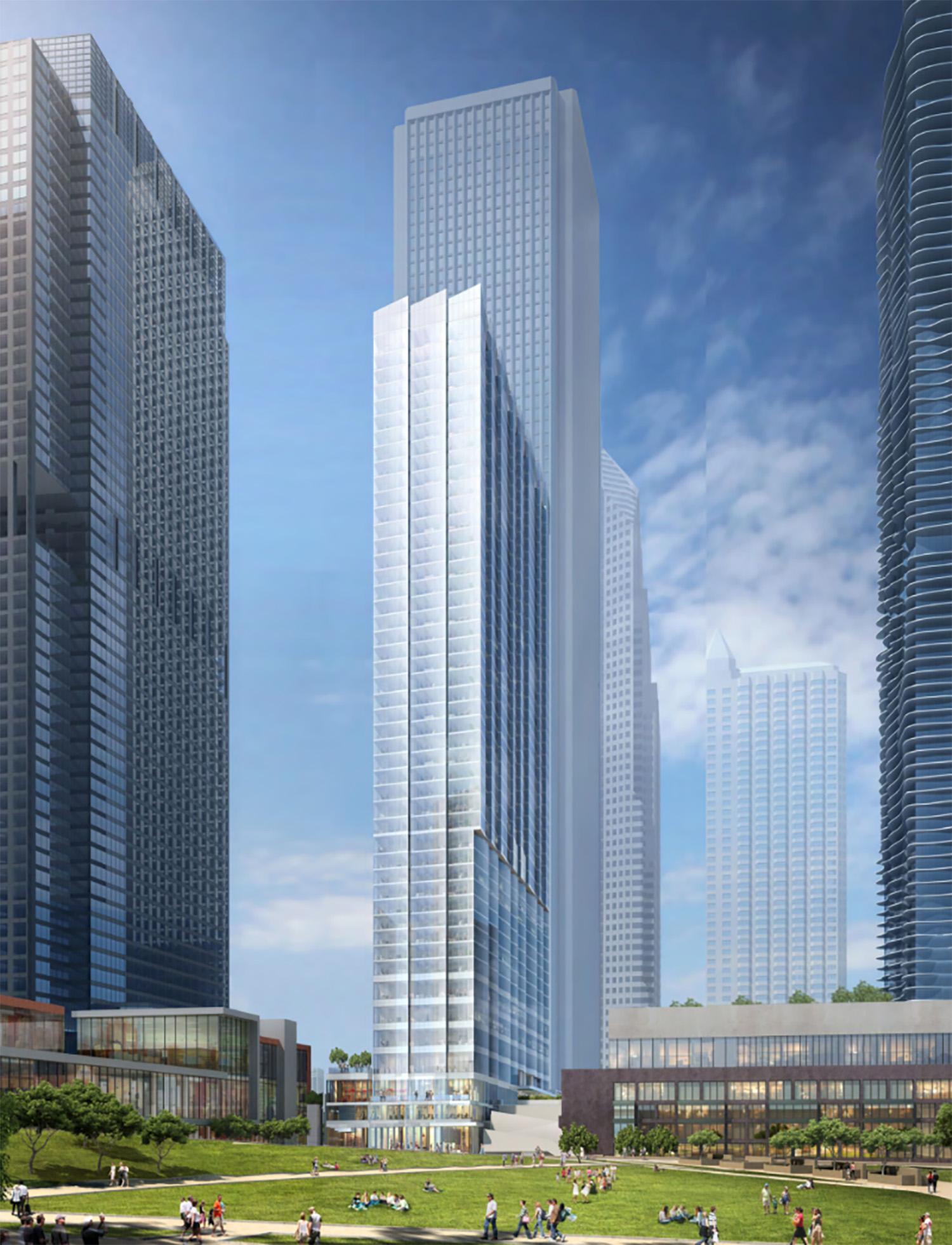 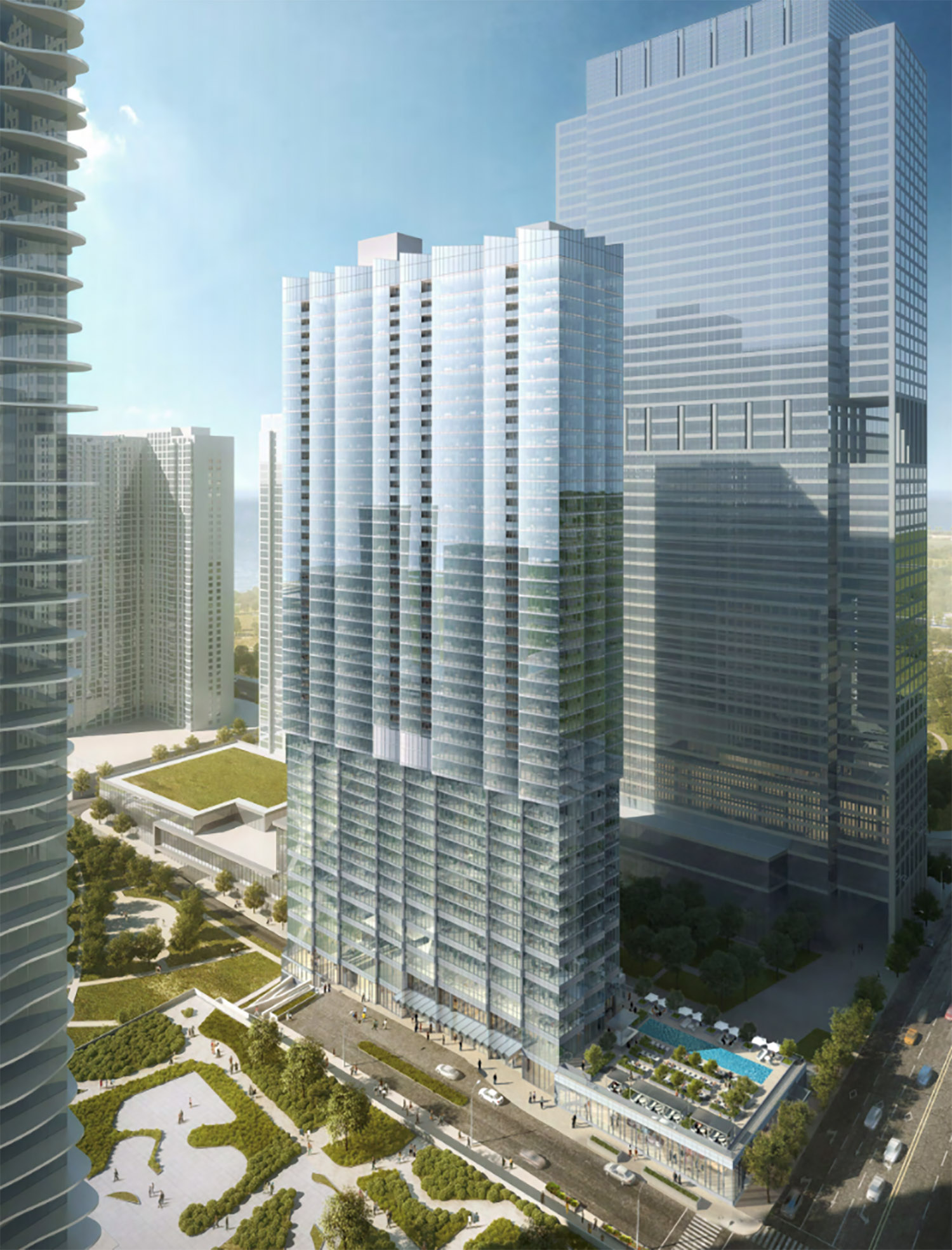 The exterior design of the tower has been updated to reflect the reduction in height and square footage, based on the programmatic shift from two hotels to one. The massing of the building has been updated and the design is derived from a sawtooth plan. The sawtooth creates dynamic movement along the façade and strong vertical lines that pull the eye up to the building’s crown. The facade’s articulation reverses direction between the residential and hotel floors, highlighting the change in program. The tower massing is pushed to the eastern side of the site, allowing for a base that is more in scale with the adjacent buildings on the park. 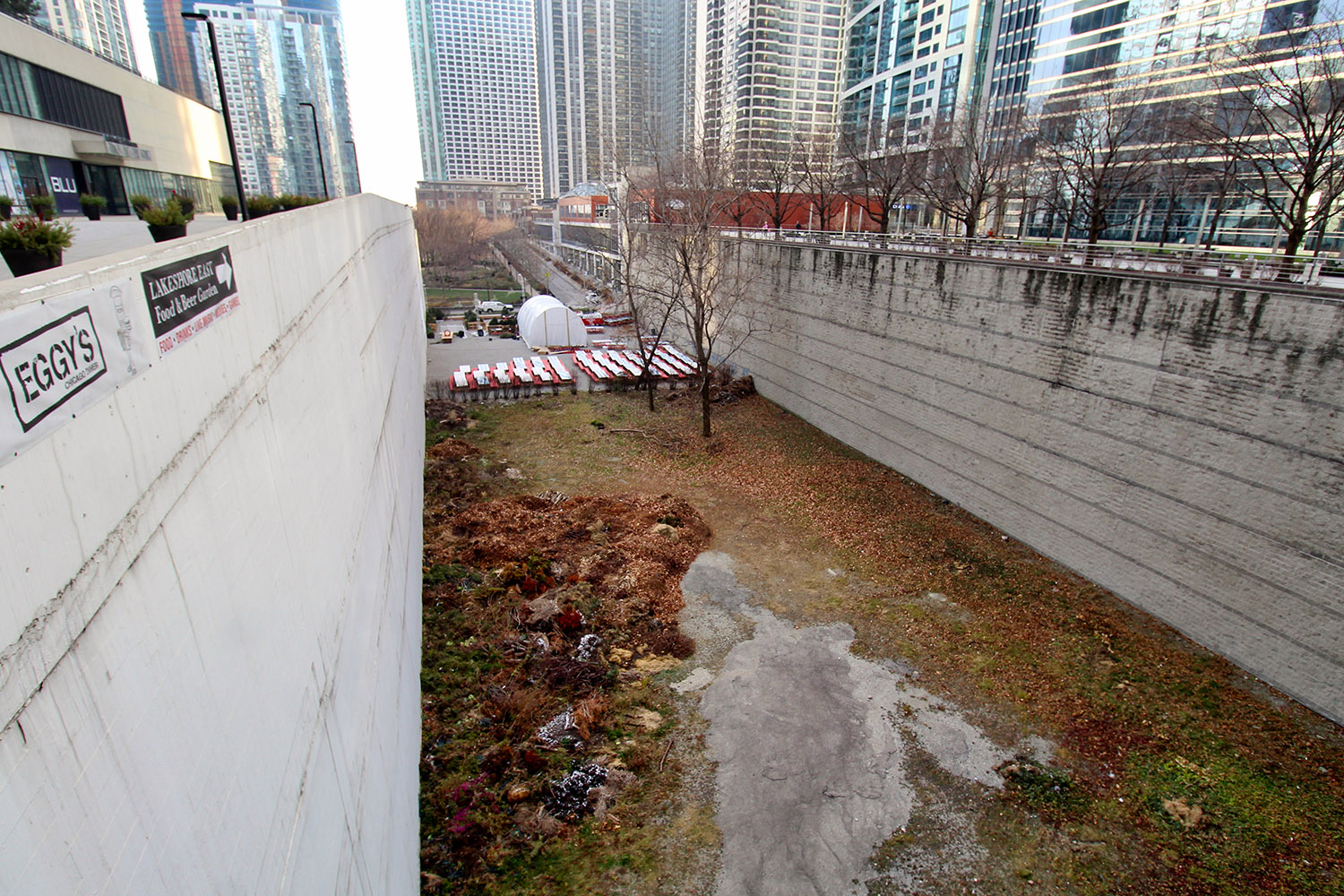 As part of the development, Magellan Development Group has agreed to deliver multiple public benefit improvements surrounding the site. The extensive list of infrastructure improvements includes a pedway connection through Village Market and the Blue Cross/Blue Shield building to the greater pedway network, the extension of an existing median on Upper Columbus Drive with the installation of a pedestrian refuge island and crosswalk realignment, and the installation of a new traffic signal at Upper Columbus Drive & East South Water Street. 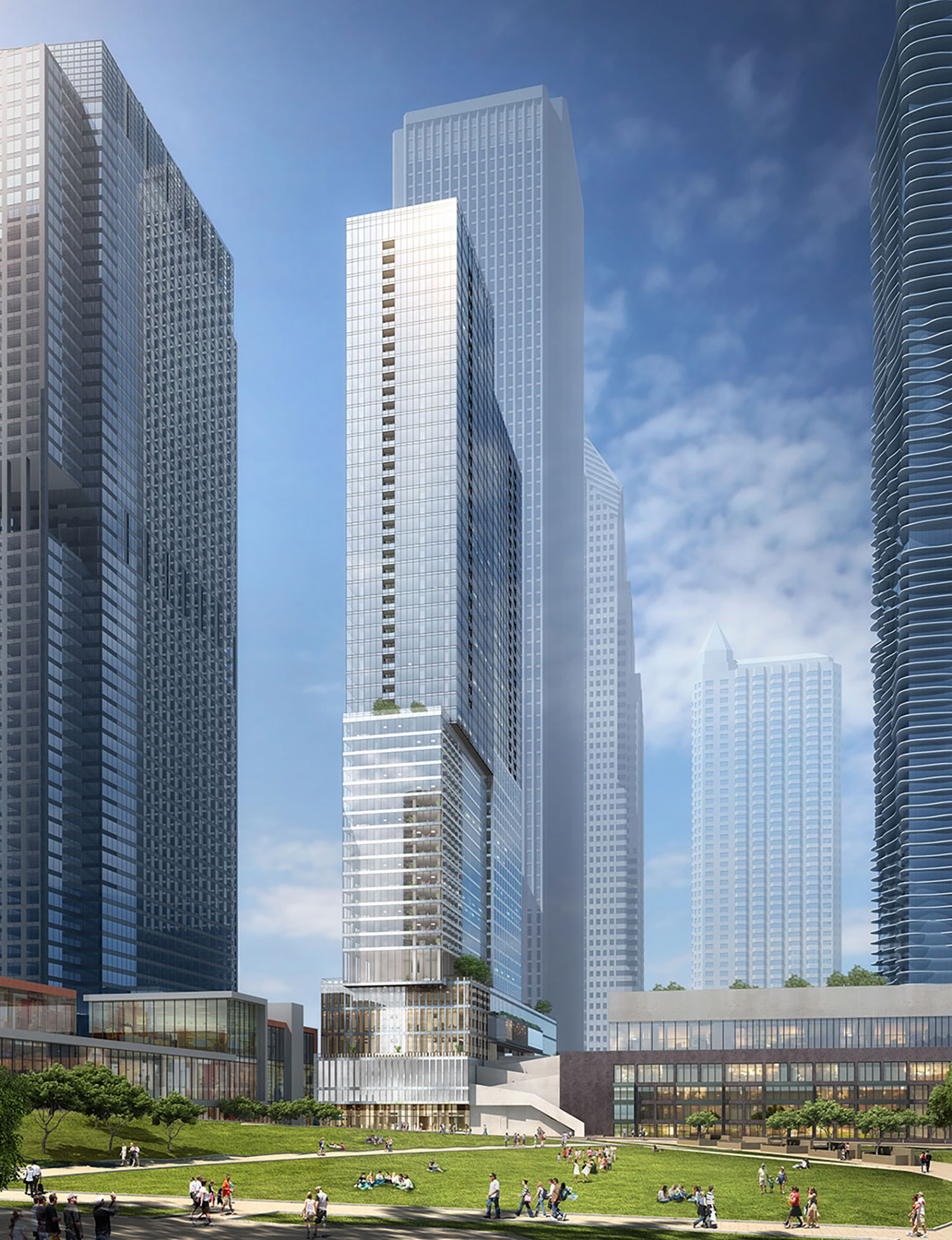 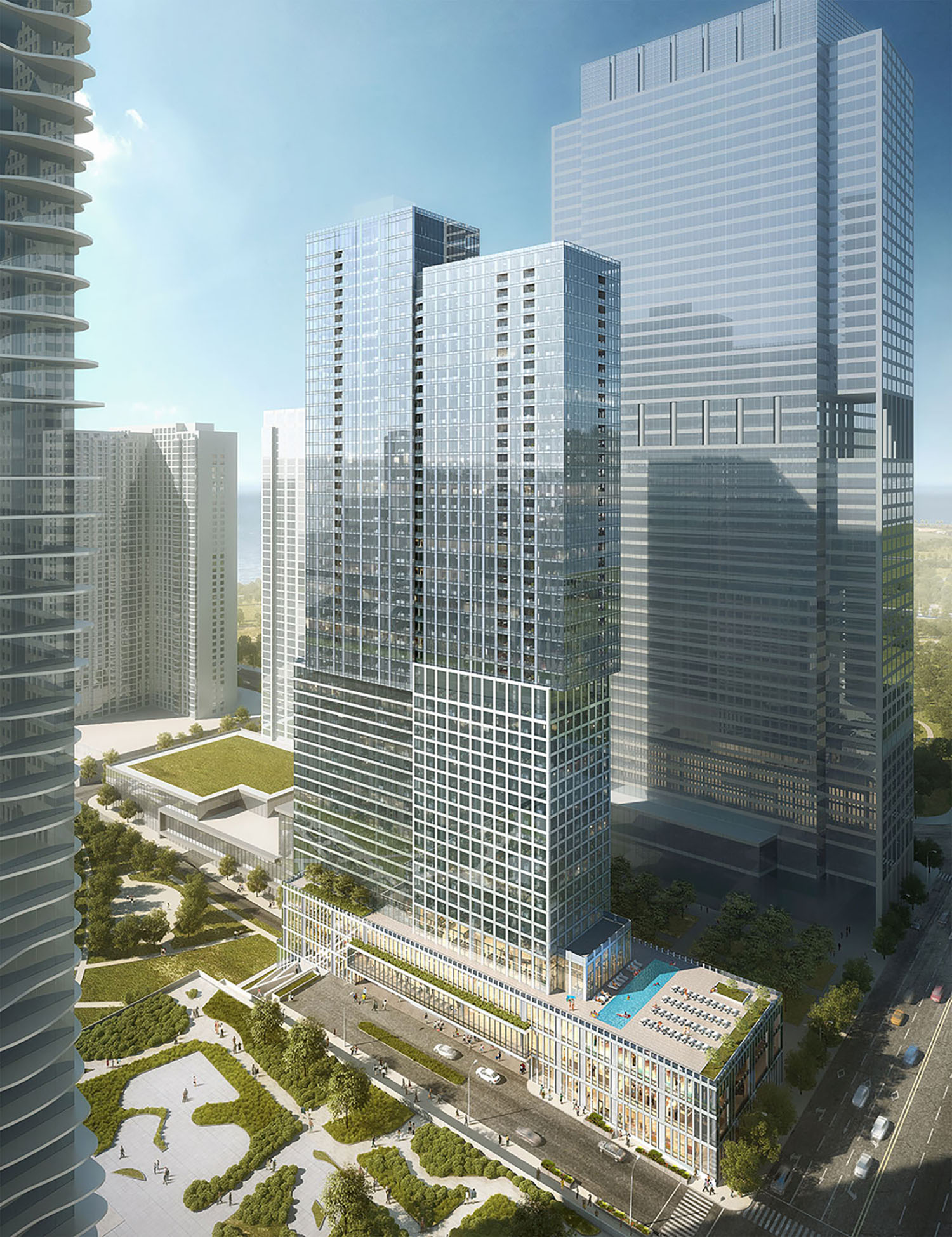 New road pavement markings will be added to Upper Columbus Drive in front of the Aqua Tower and Parcel O. At the ramp from Lower Stetson Avenue to Upper Columbus Drive, signs will be posted on both sides of the eastbound approach of Upper South Water Street prohibiting U turns and left turns. In front of Parcel O, the curb will be extended three feet into N Columbus Drive to narrow the parking lane between the driveway and the bus stop. Two planters in front of the Aqua Tower will be removed to improve pedestrian flow. Public elevators will connect the Upper Level of N Columbus Drive to Intermediate, Lower, and Park levels. Light fixtures will be installed along Parcel O and the Aqua Tower to improve lighting conditions at the east sidewalk of Intermediate Columbus level. 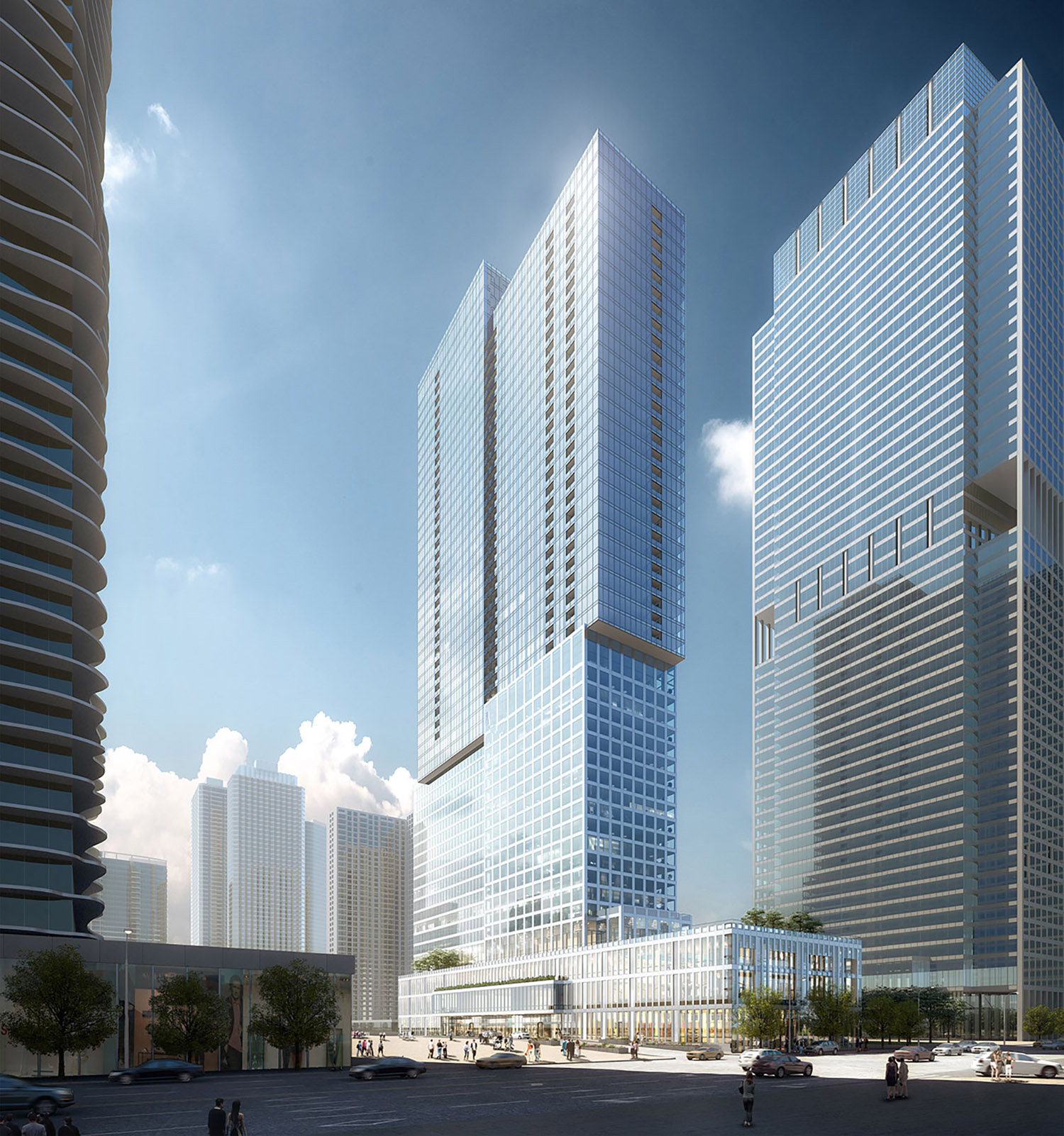 CTA access is extensive nearby. The Washington/Wabash CTA L station, serviced by the Brown, Orange, Green, Pink, and Purple Lines, is an eight-minute walk from the site. The Lake CTA L station, serviced by the Red Line, can be reached via a nine-minute walk from the site. The 4 CTA bus route passes directly adjacent to the site, accessed at the Columbus and Randolph stop. Multiple CTA bus routes are accessible at the Michigan and Lake/Randolph stop, including Routes 3, 4, 26, 66, 124, 143, 147, 151, and 157.