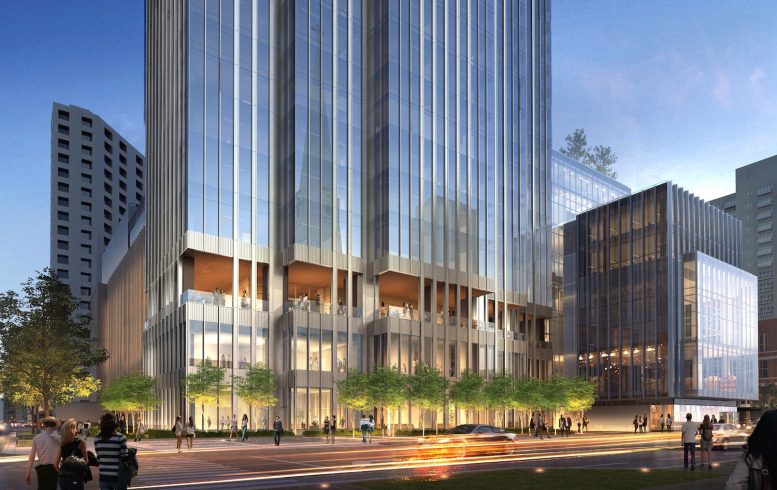 One Chicago Square. Rendering by GP and HPA

One Chicago Square has surpassed the vertical halfway mark for both its 74- and 49-story towers. Developed by JDL, the mixed-use project will max out at 971 feet in height and make a substantial impact on the cityscape in the River North neighborhood. Since YIMBY’s last update in August, each tower has climbed about 13 floors, with the structurally completed floor count now around 41 and 28, respectively. 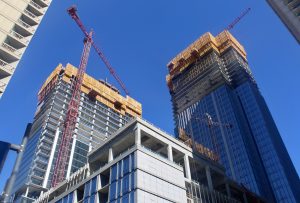 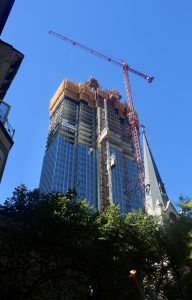 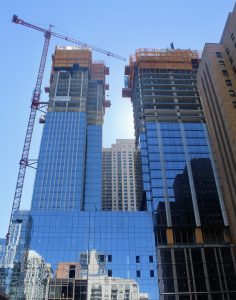 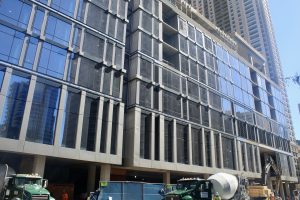 Rising near the intersection of River North, Magnificent Mile, and Gold Coast at 1 W Chicago Avenue, the project will yield a total of 735 apartments comprised entirety of the shorter tower, part of the taller tower, and part of the six-story podium. In 2019 Curbed reported the taller eastern tower will house an additional 77 condominium units, ranging in size from 1,200 square feet and priced at $1.75 million to 11,000 square feet and priced at $28 million. The podium will also house 188,000 square feet of retail space, 55,000 square feet of office space, a fitness center, restaurant, and large amenity roof deck accessible from the seventh floor. 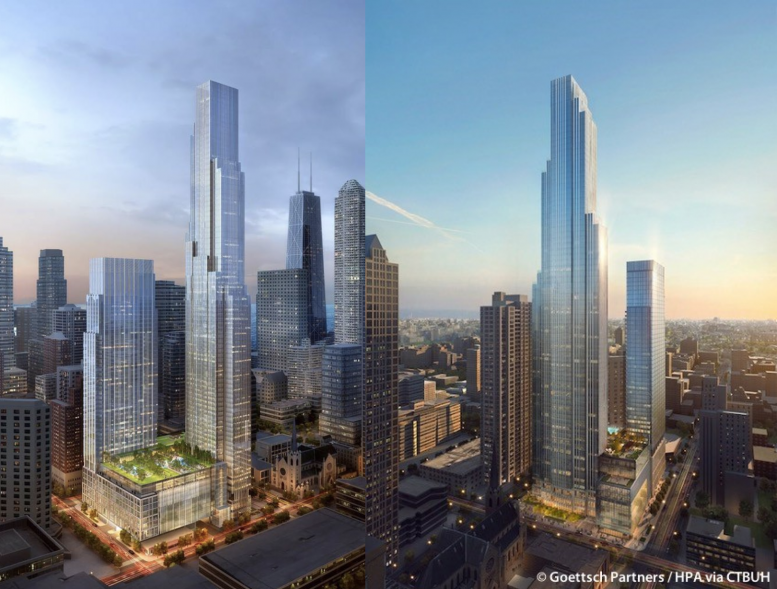 One Chicago Square. Renderings by GP and HPA

Both Goettsch Partners and Hartshorne Plunkard Architecture are responsible for the design of the 2.2 million-square-foot building. The taller 971-foot eastern tower emphasizes its verticality through a series of mullions stretching the height of the glass curtain wall, while the massing itself includes numerous setbacks that nod to the classic skyscraper forms of early 20th-century Chicago and New York. Meanwhile, the facades of the 574-foot-tall second tower and the podium continue to create a visually engaging architectural narrative while still working within the glass and metal material paradigm.

The One Chicago development almost completely fills the two-acre block bound by W Chicago Avenue, N State Street, W Superior Street, and N Dearborn Street. Holy Name Cathedral lies just adjacent to the site’s west end, while a variety of transit options also border the surrounding streets. Bus Route 22 can be accessed at the Dearborn & Chicago intersection at the northwest corner, while Route 36 can be accessed via State & Chicago at the site’s northeast corner.

For nearby CTA L Chicago access, the Chicago Station is adjacently northwest of the site, serviced by the Red Line, while the other Chicago station on the Brown and Purple Lines can be accessed via an eight-minute walk west. Tenants will have access to a variety of outdoor spaces within a ten-minute walk of the property, including the three-acre Washington Square Park to the northwest and the six-acre Lake Shore Park to the east. 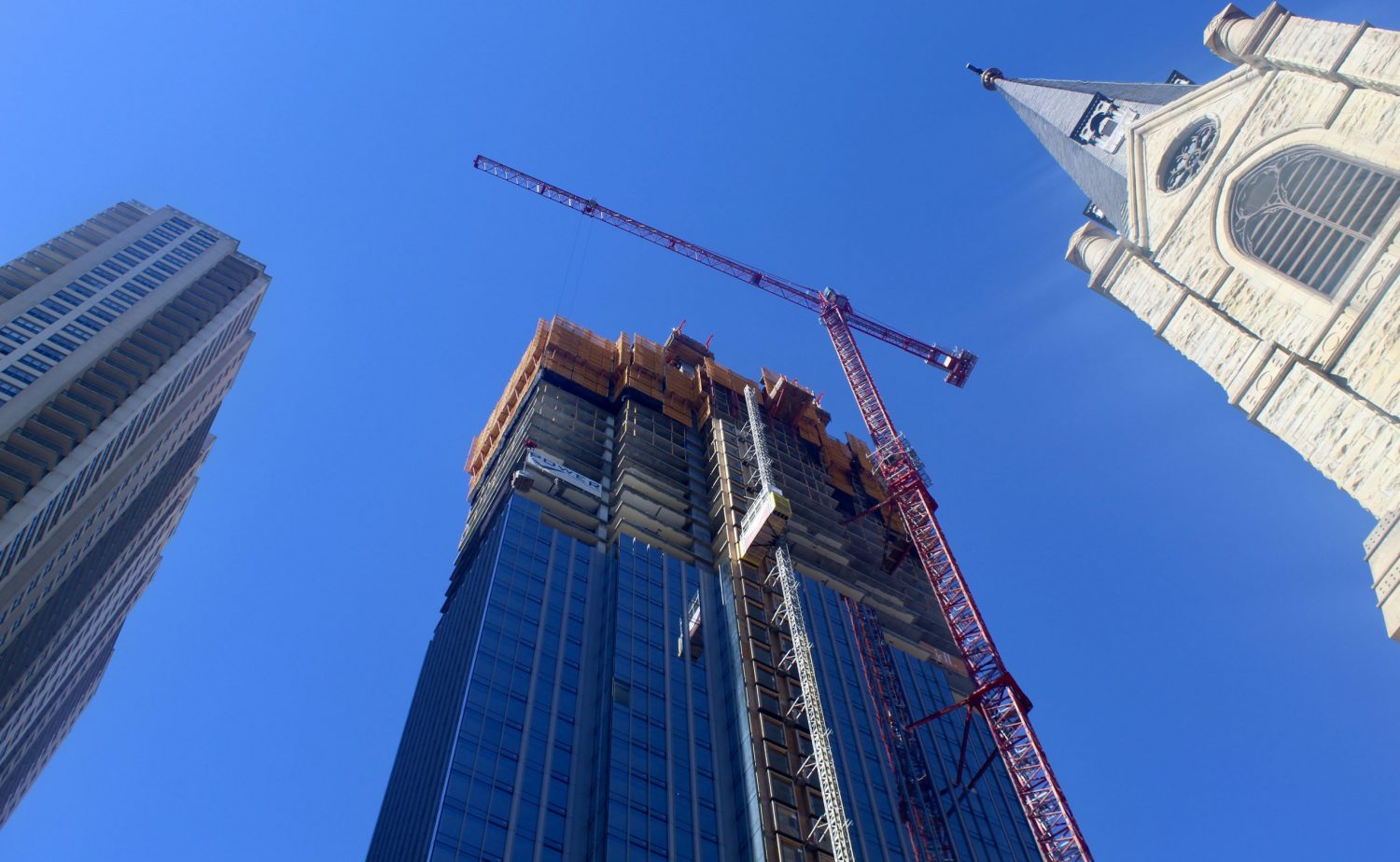 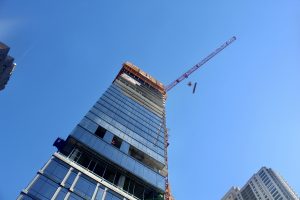 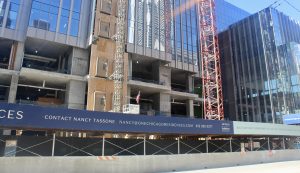 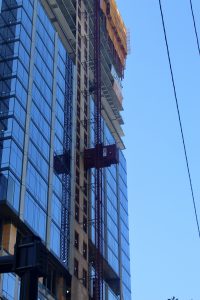 Power Construction is serving as the general contractor of the $850 million project. The development is expected to reach completion in 2022.